6 of the best software reverbs

Pressed for space? Reverb is an essential mixing tool that can help you add it to your tracks. Here, we round up the most impressive plug-ins that can give your mixes room to manoeuvre or send them to outer space. 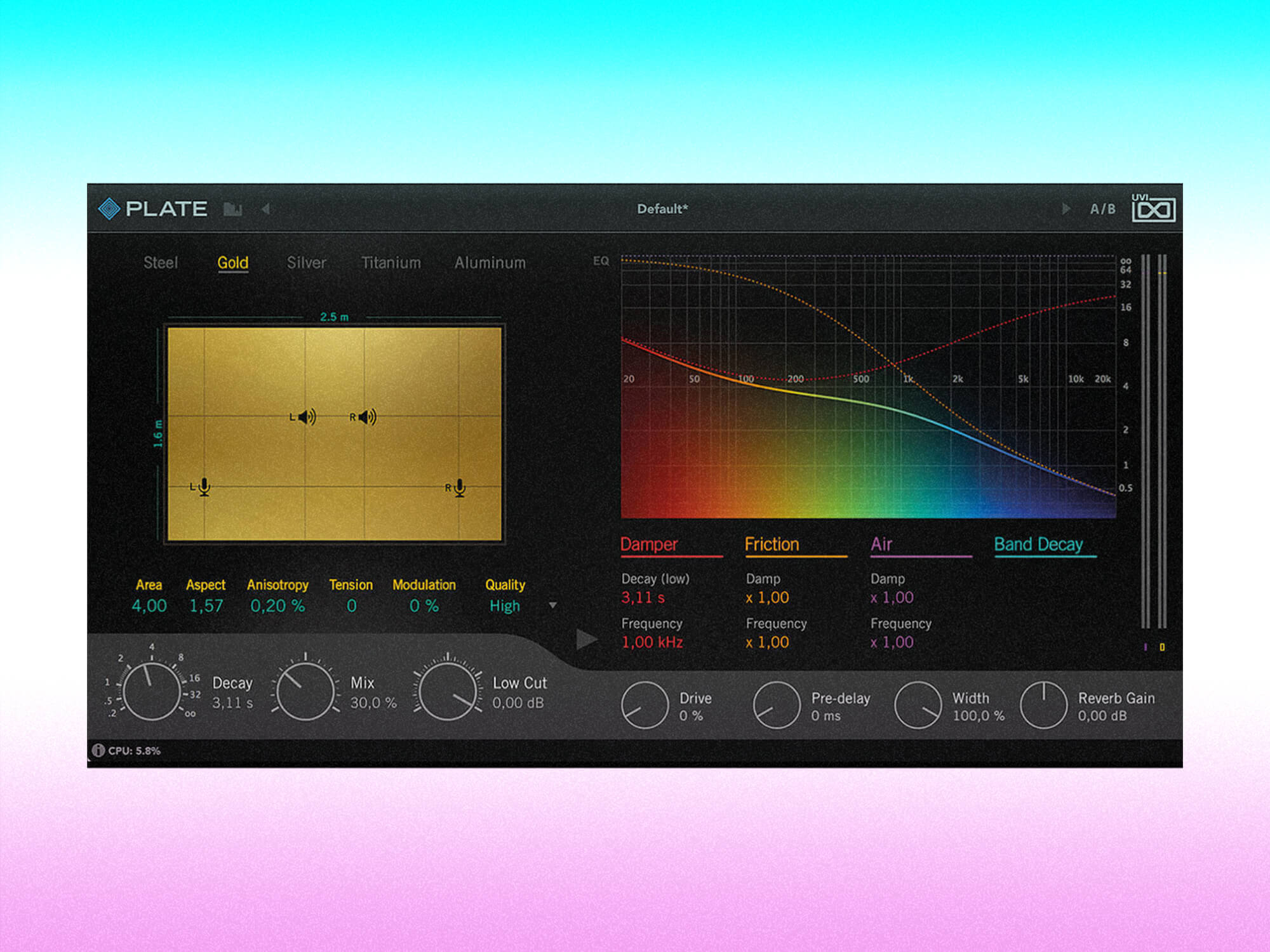 Plate reverbs sound artificial but are a sensible option if you’re looking for clean tails that will sit comfortably in your mix. UVI’s take on plate reverb gives you classic sounds akin to the EMT 140 and 240 but also lets you go beyond them. Through physical modelling, you can edit the surface area of the plate, as well as the aspect and the metal type to create more distinctive tails.

We said: “With lots on offer, you can quickly move away from the original setups, from moving the mics and speakers around to creating plates that simply don’t exist. Other folders reveal sets of long and short reverbs and those for vocals, while the Experimental folder really takes you off-world and away from the classics. Plate is so much more than a plate reverb and looks almost as good as it sounds.” 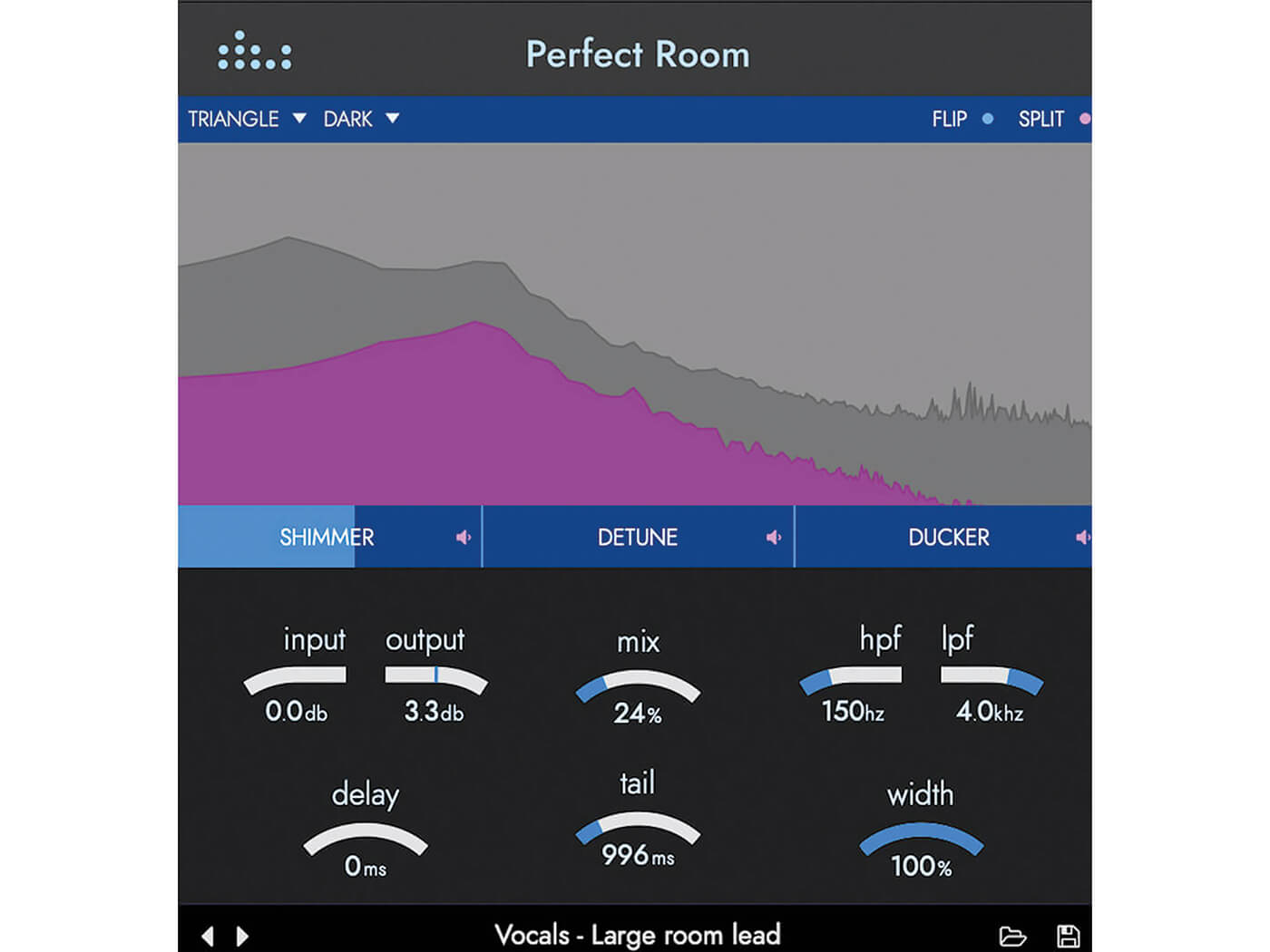 What does the perfect room sound like? Denise asked the same question and, to answer it, saw fit to develop its own reverb technology. TXVerb reduces the metallic resonances often found in algorithmic reverbs, and gives Denise’s Perfect Room its butter-smooth sound. Its intuitive controls allow users to quickly tailor the colour, harmonics and tune of their signal, as well as reverse it, and split it to create a stereo reverb from a mono source.

We said: “There’s no denying that the spaces and the tail itself sound fantastic, regardless of what instrument or vocal you’re running through it. Perfect Room is among the best reverb plug-ins you can get for below £200. Some users have called it the greatest reverb plug-in they’ve ever used – and you can’t blame them for thinking that. Since getting to grips with Perfect Room, it’s been the first thing I’ve loaded into the bus sends of my DAW so that I can give my instruments a space I can trust.”

Though there have been a number of products inspired by the 480L’s sound, this UAD plug-in is the first version officially endorsed by Lexicon. It includes all the quintessential algorithms heard across countless records, along with additional delay, chorus and other effects, plus two banks of random effects that add small modulations to create even lusher reverb sounds.

We said: “As you’d expect, the reverbs have that all-important enveloping quality that adds musicality and a sense of dimension to anything they affect. Dial in a longer reverb tail and you get that distinctive Lexicon shimmer that will fill out the soundstage of your mix so well, while shorter settings never seem to smear or obstruct the dry sound like some other reverbs can. Sure, it would be nice to have a genuine LARC on my desktop but for just £260, Universal Audio has brought me as close to a genuine 480L as I ever need to be.” 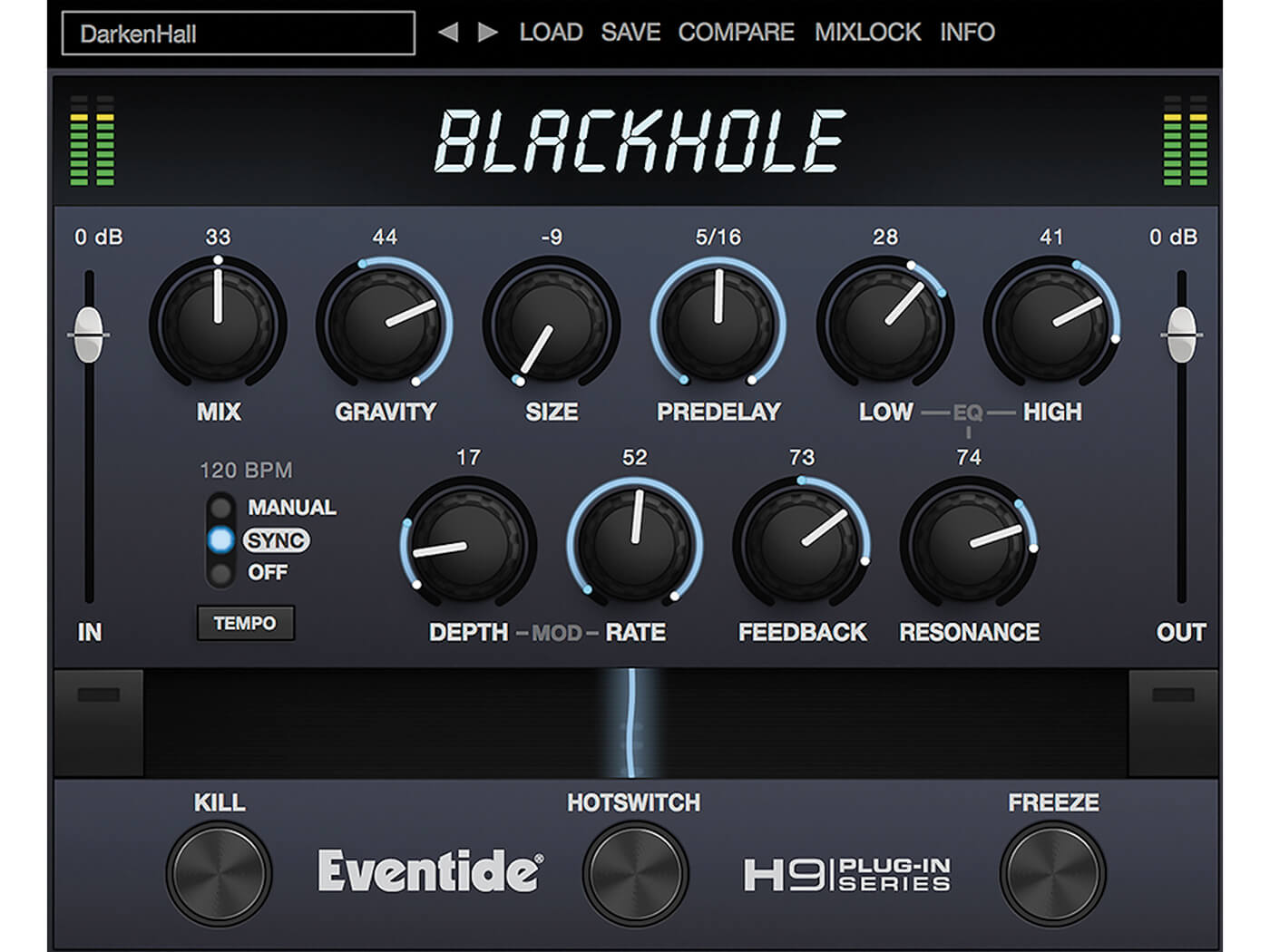 Although it began life as a hardware algorithm, the plug-in version of the Blackhole reverb was released in 2012 and recently updated with additional features. Famed for its ability to create abstract spatial effects and drones, it became a go-to weapon for wielders of ambient sounds and textures. The unique Gravity control inverts the reverb’s decay to create reverse-style effects, and the innovative Ribbon and Hot Switch allow you to simultaneously alter multiple parameters. There are also a bunch of artist presets that demonstrate its broad capabilities, making this a superb choice for sound designers.

We said: “The plug-in is out of this world and specialises in entirely new and exciting reverb spaces that previously didn’t exist – at least, not on this planet. As such, it really does have a sound all of its own: from multi-layered shimmers across conventional instruments and vocals to massive atmospheric drones, depending on the source material. Blackhole is as galactically great as ever.” 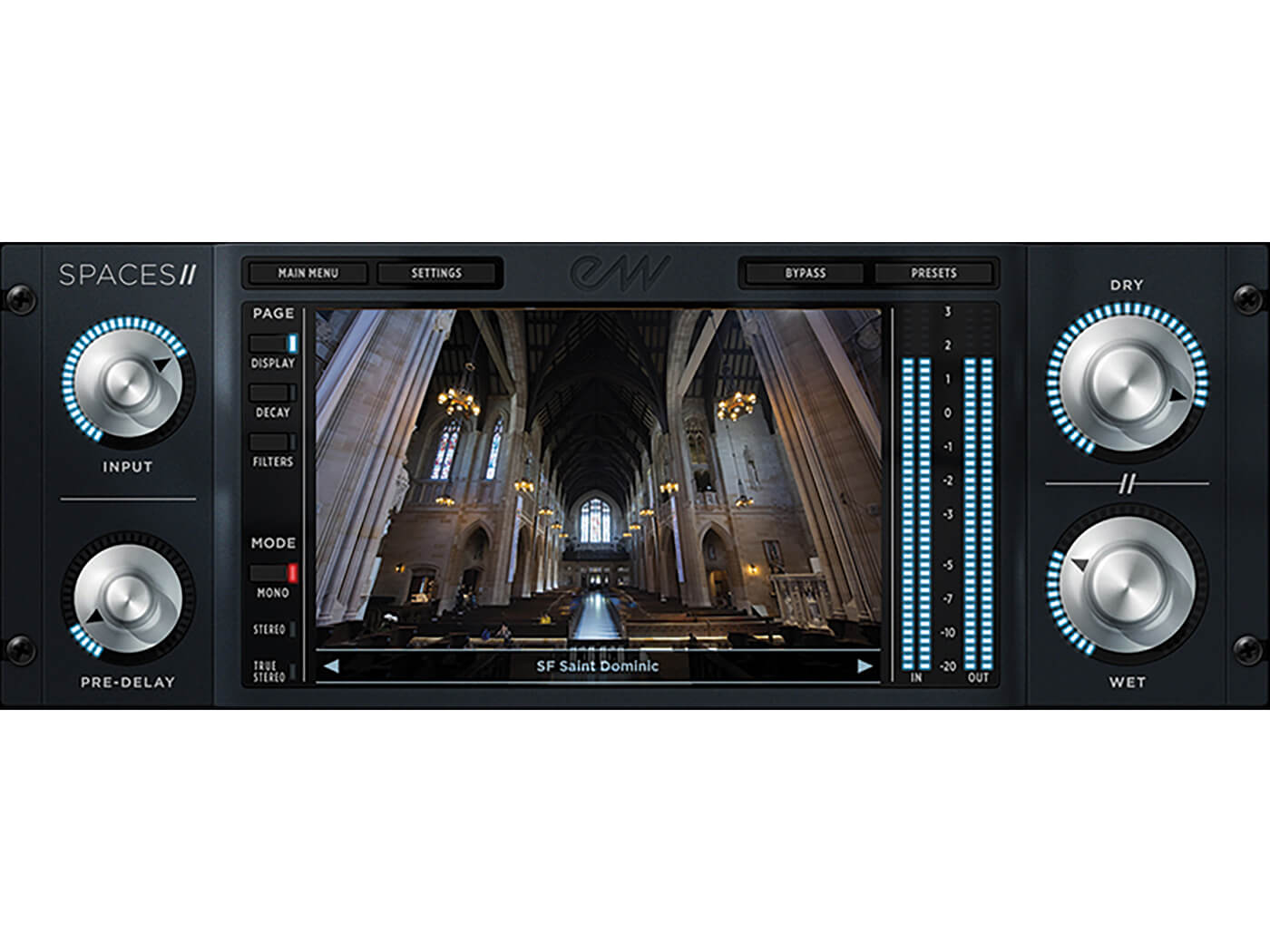 If you want some realistic and natural-sounding impulse-response reverbs for orchestral work, look no further than Spaces II. There are more than 1,000 captured reverbs here, covering sound stages, concert halls, cathedrals, train stations, forests and more, plus 372 instrument-specific choices to help you get going. For some of the concert halls, there are even IRs measured at different placements, making it possible to call up overall settings or something specific, such as the perspective of the wind or particular percussion sections.

We said: “I can’t overstate how realistic this sounds. Sure, it’s easy enough to swan though the presets and hear what’s being thrown your way but I found myself completely drawn into the sonic and musical side of what Spaces II has to offer, and that’s purely down to how musical it sounds and the ease with which you can make changes on the fly.” 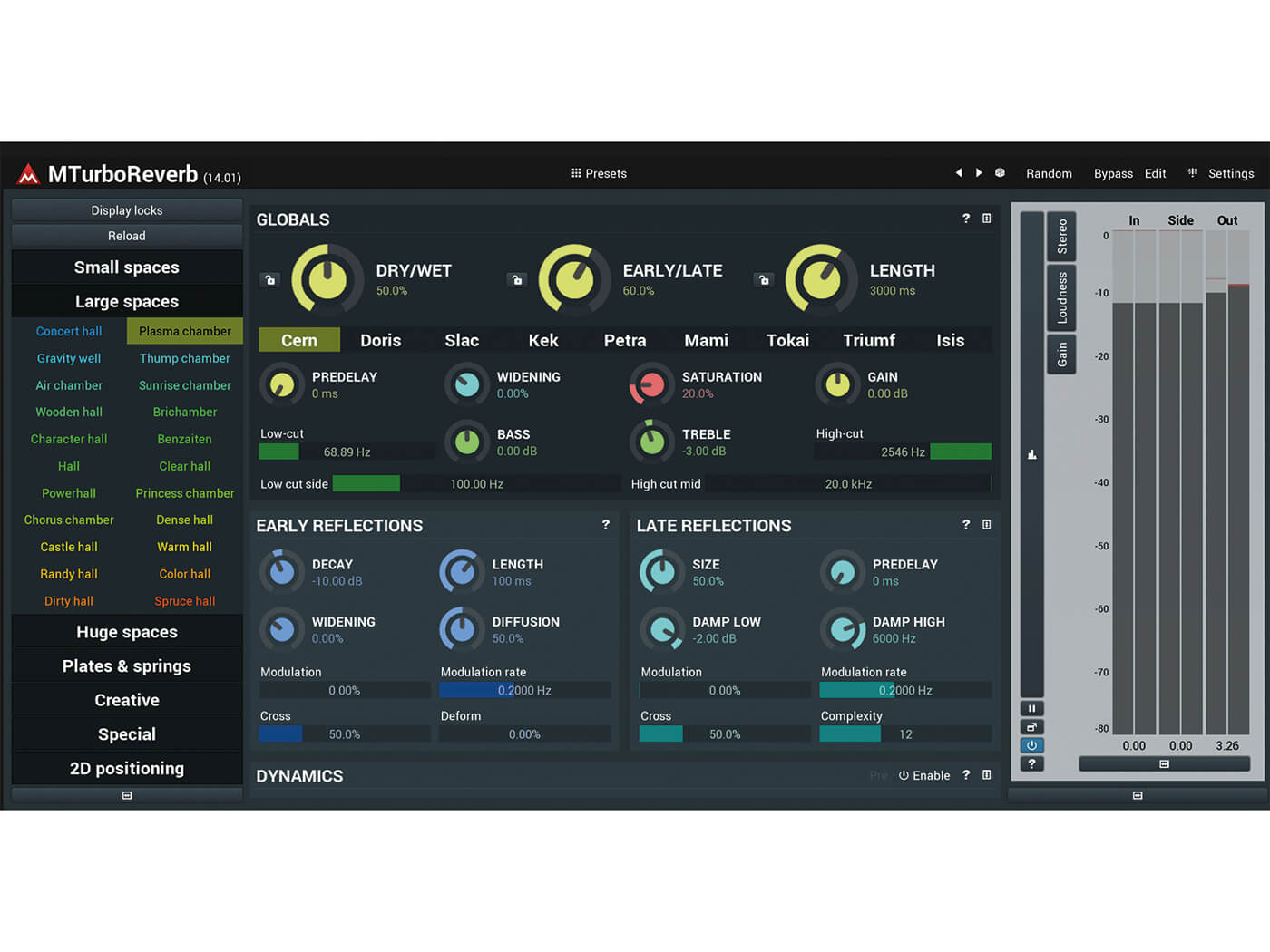 All the aforementioned reverbs excel in their specific areas but MeldaProduction’s MTurboReverb is a truly all-inclusive plug-in. It comes with 100 algorithms and allows you to craft your own using four early- and six late-reflection generators. It’s a complex beast, with plenty of built-in effects and modulators, as well as a multi-band version and an LE version with reduced functionality. It can do it all.

We said: “One thing that blows my mind about MTurboReverb is that everything is programmable down to the reverb algorithm itself. The amount of parameters that can be changed are mindblowing. For those who want to get into the nitty-gritty of reverb-building, MTurboReverb has the engine to help you realise your dreams. The edit screen is not for the faint-hearted but if you feel compelled to build your own reverbs, this is going to get you excited.”