A lush and creative reverb, MTurboReverb is the latest excellent plug-in from MeldaProduction.  With ‘one button’ simplicity and infinite programmability, Marc JB discovers whether it’s as inspiring as it sounds… MTurboReverb Details Kit MTurboReverb Manufacturer MeldaProduction Price Introductory offer: €149 (Usually €299) Contact via website Web www.meldaproduction.com Founded in Prague, Czech Repulic in 2009 by […] 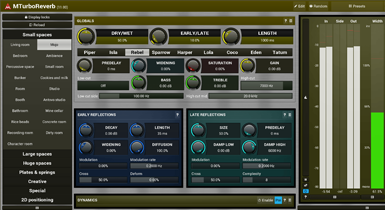 A lush and creative reverb, MTurboReverb is the latest excellent plug-in from MeldaProduction.  With ‘one button’ simplicity and infinite programmability, Marc JB discovers whether it’s as inspiring as it sounds…

Founded in Prague, Czech Repulic in 2009 by Vojtech Meluzin, MeldaProduction is a music software company with a bold and futuristic vision. Inspired by the richness of analog gear and the newest digital creations, they are pushing forwards the horizons of audio technology.  MeldaProduction feel that the audio industry is extremely conservative so they are not holding back on innovation. With their technical know-how and their knowledge of what music producers want, they can program the hell out of a plug-in!

The software is easy to install using a bespoke MeldaProduction program. The reverb requires a licence key downloadable directly from your account, updates are free for life. In minutes from setting up my MeldaProduction account, I was trying out the various reverbs on my DAW – there are few things that can top that ‘playing with new music gear’ feeling (Go on admit it, it does feel good!). 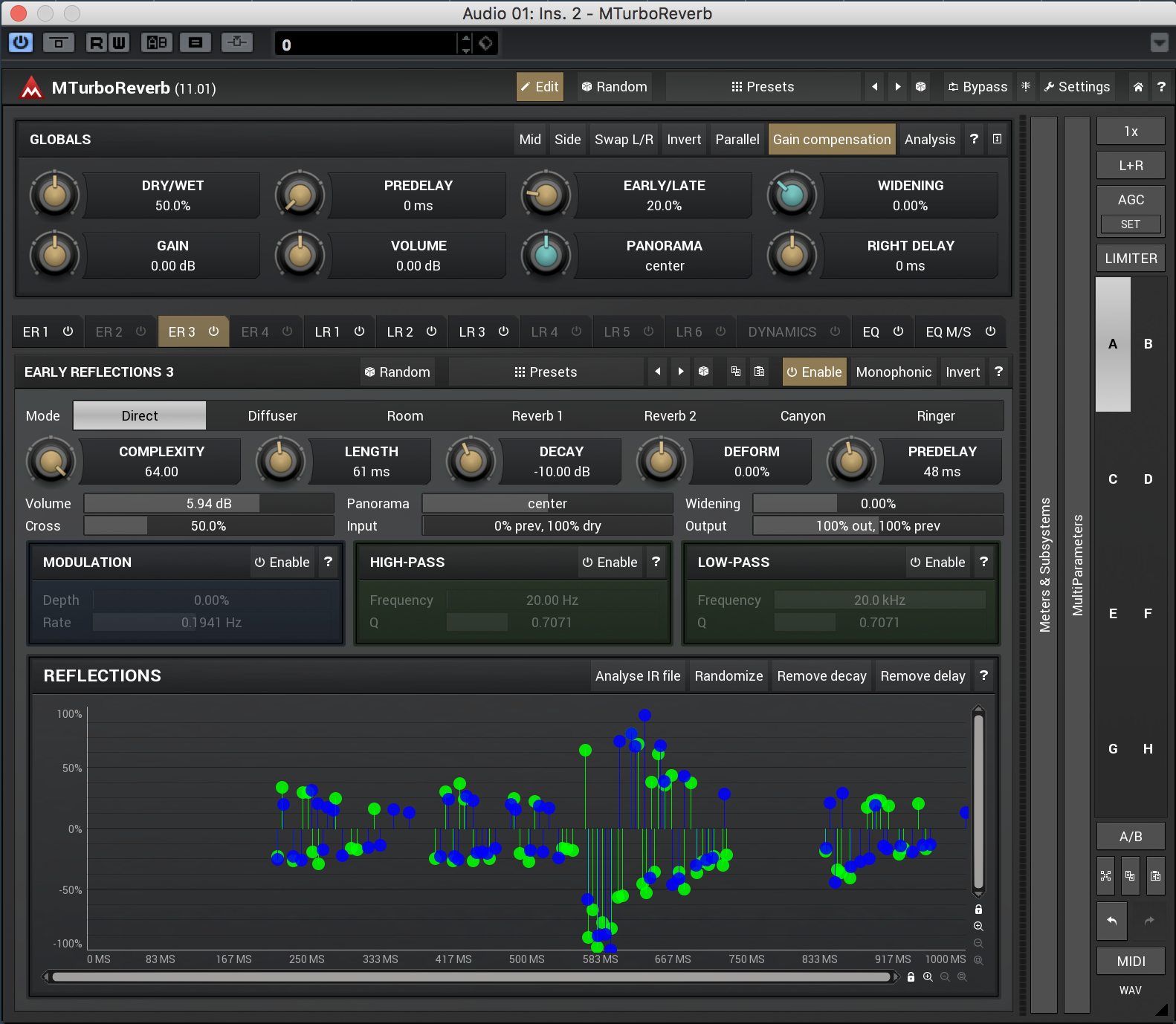 So what makes this different?  Algorithmic reverbs are usually based on a single algorithm.  MTurboReverb has a programmable engine, where you can design your own algorithms.  Luckily for the non-designers and those of us who require instant gratification, about 100 presets have been prepared with an ergonomic interface for quick workflow and quick learning. With rooms, halls, plates, ethereal, shimmering, bonkers, reverse, non-lim and 2D positioning reverbs, this is a very versatile product.

The presets come organised in batches (small, large, huge, plates & springs, creative, special and 2D) so it’s pretty easy to find a useful reverb in a couple of clicks. The presets are well named, giving a sense of how they will sound when in action.

It’s interesting that all the presets have been set up with a mixed balance of wet/dry, programmed to be used as individual channel inserts.  Of course move the fader all the way to ‘wet’ and they can be used as FX sends.

The small reverbs have a smooth sonic character that puts your sound into an interesting acoustic space. The presets sound like they should, Small Room puts you in a bright small acoustic space, Bedroom sounds like an unfurnished bedroom with a gloss laminate floor, Mojo adds a short stereo reverb that widens the stereo image, great on guitars.  Wine Cellar sounds like a decent place to store about 500 bottles of plonk, MeldaProduction must have a decent size cellar, and good parties too.  My favourite ‘small’ preset is Rice Beads that brings a shine with a delayed ‘smear’ that works great on vocals.

The large reverbs sound lush and spacious with excellent stereo field.  My favourite on vocals is dirty hall for its rich, clear tone and smooth decay. Gravity Well has a silky shine, synths sounded great with this preset.

The Huge Spaces are indeed huge sounding.  Here you can hear the excellent decays on the reverbs. Some of the patches have interesting stereo movement, the  Planets reverb tail shimmers across the stereo image – creating space and interest in the mix 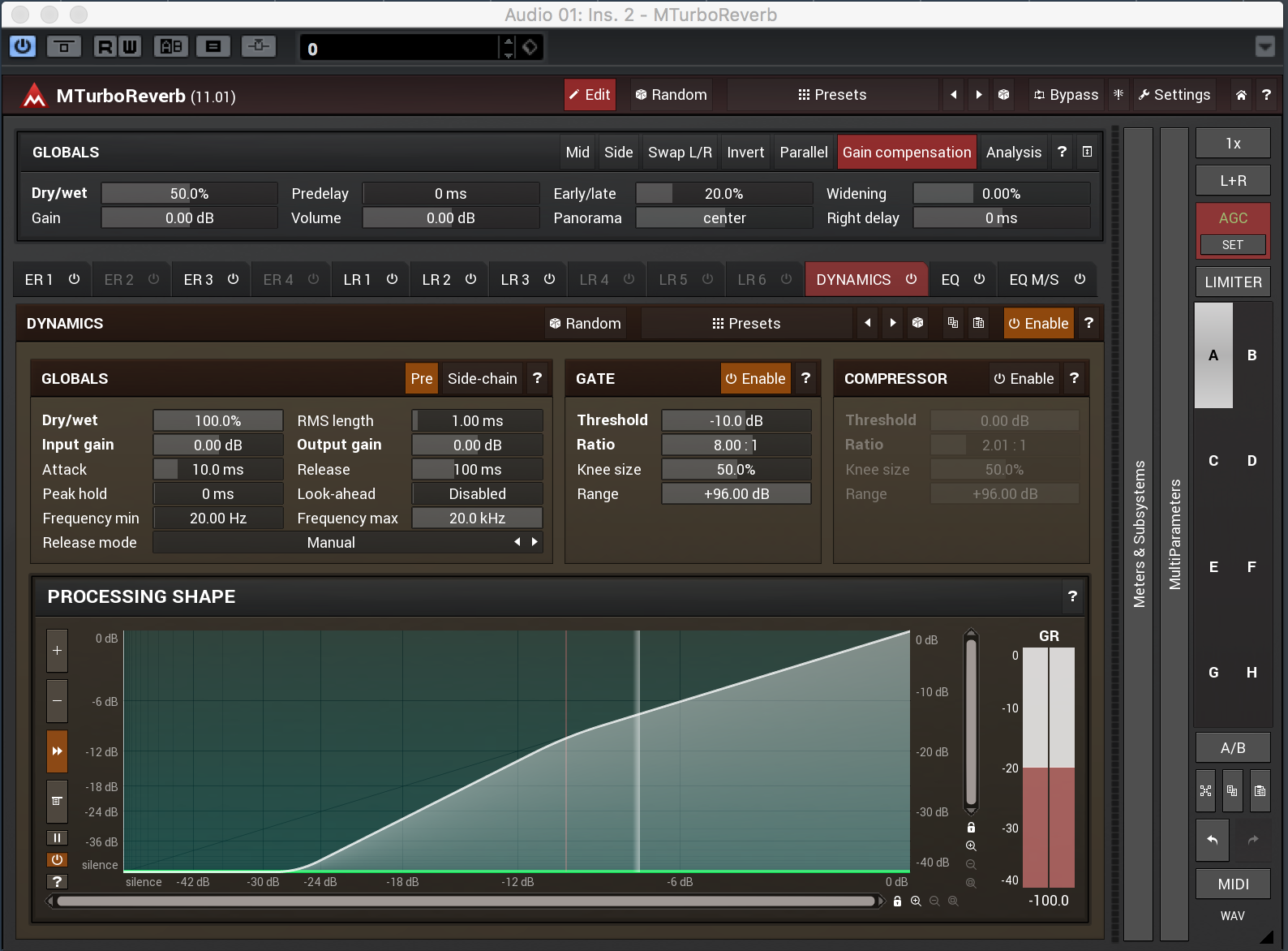 The plate reverbs are sparking and useful. With its shiny echo the Spring(short) is very satisfying on guitars, increasing the predelay turns it in to a ‘Paul Simon’ type guitar reverb.

The Creative reverbs are very inspirational, Rattlesnake has an interesting phase effect on the tail.  With size turned up, Infinite Cavity does indeed last for a very long time, enough time to boil a kettle.  An interesting preset in the Special reverb category is Non Lin for epic, 80s drums.  I had a play with the settings to get a more harmonically balanced sound on this one.

The 2d positioning settings are great for placing your sound source in a physical space, fun to play with.  I found that some of the presets could be automated to create moving sounds with great effect, however others created strange frequency artefacts while moving the 2d positioning live.

MTurboReverb is excellent at the run-of-the-mill presets expected from a top-of-the-range reverb and has plenty of character to boot.

The interface is well laid out with the usual reverb tweaking parameters on the front page.  Dry/Wet defines the ratio between your original dry signal and the produced reverberation signal.  If using this as a send effect, it can be locked at 100%. Early/Late defines the ratio between early and late reflections.  Early reflections are the first echoes you hear coming back at you from the acoustic space and late reflections are the sound of the sound bouncing around thereafter.

Length controls the reverb decal time, only affecting late reflections. Late reflections are produced in a similar way to nature using a system of delays and feedback lines.  In theory the decay never ends so the ‘reverb time’ is when the signal gets to approximately -60dB.

Type changes some of the reverb algorithm properties so simulate several predefined spaces, like tiled, dark, narrow or bright.  This does add a lovely difference of character to the reverbs.  Predelay is the initial delay before the reverb comes in, pushing this up has the effect of making the source feel further way.  I find that below 45ms, transient sounds sound close and immediate, above 45ms and the reverb sound starts becoming separate from the dry signal.

Try using short delays and change the pre delay to create an interesting ‘reverb delay’, this can really make drums and guitars groove. Widening controls the stereo width of the reverb, at 0% the signal becomes mono.  MTurboReverb is mono-comparable so there will be no phase issues here.

You can dive in as deep as you like, edit individual early reflections, add modulators, dynamics, 5 band parametric EQ, mid/side processing, the list of features goes on and on! 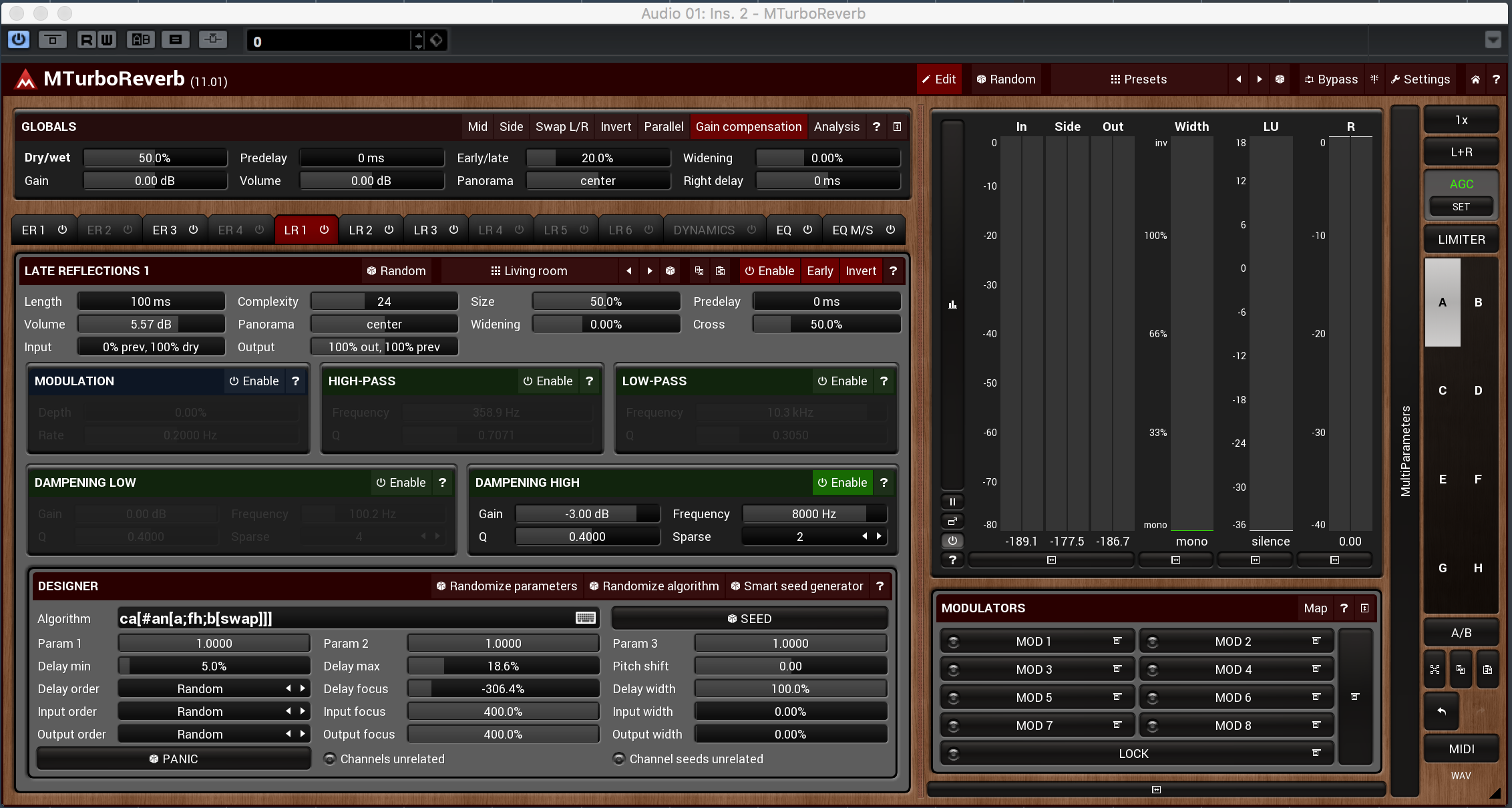 One thing that blows my mind about MTurboReverb is that everything is programmable down to the reverb algorithm itself. The amount of parameters that can be changed are mind blowing. For those who want to get into the nitty-gritty of reverb building, MTurboReverb has the engine to realise your dreams!  The edit screen is not for the faint hearted, but if you feel compelled to build your own reverbs, this is going to get you very excited.

It comes in two versions, MTurboReverb is the full licence with full access to features including the multi band version MTurboReverbMB.  MTurbeReverbLE is a limited licence with the active presets but without the in-depth editing and creating abilities.

I should point out at this stage that the manual is absolutely huge, in fact it’s more like a university crash course in reverb design. Thank goodness it comes as a downloadable PDF or it would take a large patch of forest to make the paper to print it out