The Holy Grail of digital reverb – the Lexicon 480L – finally gets the Universal Audio treatment.

There are few more iconic studio scenes than a Lexicon 480L reverb perched on top of an SSL 4000 Series console. Indeed, walk into any control room in the 1980s and the sight of the 480L meant you were undoubtedly at a ‘professional’ facility.

The 480L’s reputation was rightly deserved as, even to this day, it remains one of the finest-sounding algorithmic reverbs ever produced, with a highly recognisable sound heard on countless records. Even though technically superior iterations came along – notably the 960L – the sound of the 480L became synonymous with wide and expansive reverb, making it arguably the pinnacle of Lexicon’s achievements.

Given the pedigree of the 480L, it’s no surprise to find a number of plug-in versions claiming to be ‘inspired’ by its sound, although none to this date have been officially endorsed by Lexicon. The precursor to the 480L – the Lexicon 224 – was previously modelled by Universal Audio (under full endorsement from Lexicon) and remains a firm favourite in my studio.

Lexicon itself has released various plug-in reverbs (most notably the Lexicon PCM Native Reverb series, which borrows its algorithms from the PCM96), but has so far avoided revisiting its 480L legacy. The UAD Lexicon 480L is significant, therefore, both in the fact that it’s endorsed by Lexicon, but also as we’ve had to wait so long for its arrival.

Before we dive into the plug-in, it’s worth revisiting how the 480L worked and what made it so unique. Technically speaking, the unit came in two parts: the distinctive LARC controller that perched on top of your console, and a 3U mainframe, stored away in an adjacent machine room, which did all the hard work.

The LARC was undoubtedly a big part of the 480L’s appeal, making the reverb tangibly ‘hands on’ and easy to edit, whereas other reverbs necessitated paging through tiny parameter-packed LED screens. The mainframe, of course, packed an enormous amount of DSP muscle for the time, as well as hosting those all-important algorithms!

The plug-in 480L is fronted by the LARC controller in software form, although with the addition of a few tweaks to make it even easier to operate. The algorithms are ported from the final 4.10 firmware, so arguably represent the peak in the 480L’s evolution.

Most notably, it means that the 480L (unlike the UAD Lexicon 224) isn’t just a reverb unit,
but also carries a range of effects algorithms covering delays, doubling, chorus and tremolo treatments. Most importantly, it also carries the famous Random effects (more on this later) that became a big part of the distinctive Lexicon sound and something impossible to capture using convolution.

The sound of the plug-in 480L is a sheer delight, clearly filling a gap between the Lexicon 224 and Lexicon’s own PCM Native Reverb I use on a daily basis. A large part of the appeal of the 480L has to be its familiarity, as the majority of music recorded throughout the 80s, 90s and even into this century, has been touched by the sound of the 480L.

As you’d expect, the reverbs have that all-important lush, enveloping quality that adds musicality and a sense of dimension to anything they touch. Dial in a longer reverb tail, and you get that distinctive Lexicon shimmer that fills out the soundstage of your mix so well, while shorter settings never seem to smear or obstruct the dry sound like some other reverbs can.

As you’d expect, the user interface stays close to the appeal of the original LARC and should be immediately familiar to existing users. The fader system always made the reverb inviting to edit, and now that page/parameter info display has been improved, it’s easier to understand what parameters you’re adjusting. Other additional features include an A/B Machine-switching mode, so you can jump between two different settings, and ‘hidden’ features in respect to individual control of the left and right-hand I/O.

Although there’s been some good 480L-like emulations over the years, it’s arguably the UAD version that leads the field. Although there are some viable alternatives, such as the Relab LX480 Complete, they often cherry-pick the full list of algorithms, with only the UAD 480L having the full set of effects ported from the final firmware version.

Trying to match settings between the UAD 480L and some of its rivals reveals similar (though not identical) results, but subjectively, I feel the timbral shape of the reverb tail and its overall musicality keeps bringing me back to the UAD 480L. Clearly, there’s some detailed modelling going on here, which does explain the relatively large DSP footprint of the plug-in.

Another point worth picking up on is the inclusion of two banks worth of Random effects. On the original 480L unit, the Random banks added small modulation effects as a means of breaking up some of the ringing effects that longer tails could occasionally produce. The effect of the Random banks on the 480L is arguably bigger – a lusher reverb that’s especially useful for longer reverb times.

The key point to note, though, is that these Random effects can’t be captured by convolution so, although you might think a collection of 480L impulse-response files captures the full sound of the unit, it’s only half the picture.

With an RMX16, Lexicon 224 and EMT250 in its list of plug-ins, the UAD platform isn’t exactly undernourished when it comes to algorithmic reverb, but after a long wait, the inclusion of the 480L is really the jewel in the crown. It’s hard to imagine a more versatile and musically empathetic reverb – even including modern classics like the Bricasti and Lexicon’s own 960L. And, as always, the level of modelling recreates all the inherent sonic charms and intricacies of the original unit, so even die-hard 480L users will struggle to differentiate the plug-in from the real hardware.

Of course, the inevitable caveat with a plug-in like this is DSP usage, especially if your mix is already using a lot of UAD plug-ins. The single-chip DSP usage of the 480L stands at around 61 per cent. This places it amongst some of the more DSP-hungry UAD plug-ins, such as the Fender ’55 Tweed Deluxe and Thermionic Culture Vulture, and at least 40 per cent higher than the Lexicon 224.

Still, one good reverb sounds infinitely better than 10 half-baked instances so, unless you’re running an old Satellite Duo, that level of resources isn’t hard to justify. However, if you use a separate reverb on every channel, it’s maybe time for a rethink.

As a self-confessed reverb junkie, the thought of owning my own 480L has always been a tempting prospect, tempered only by the fact that original units still command prices of £3,000-£4,000. Sure, it would be nice to have a genuine LARC on my desktop, but for just £260, Universal Audio has brought me as close to a genuine 480L as I ever need get.

Having at least one ‘good’ reverb has always been a sensible approach to equipping your studio – either in hardware or software form. Although we’re somewhat spoiled for choice nowadays, the pedigree of algorithms included in the original 480L has really come to define the sound we refer to as reverb.

Of course, reverb will always be a somewhat subjective choice, but there’s no denying how reassuringly familiar the UAD Lexicon 480L sounds. While it’s possible that your convolution reverb plug-in will include some impulse response files sampled from a 480L, or indeed you might already have a 480L-like plug-in in your collection, the UAD Lexicon 480L is easily the last word when it comes to the authentic 480L sound and list of algorithms. 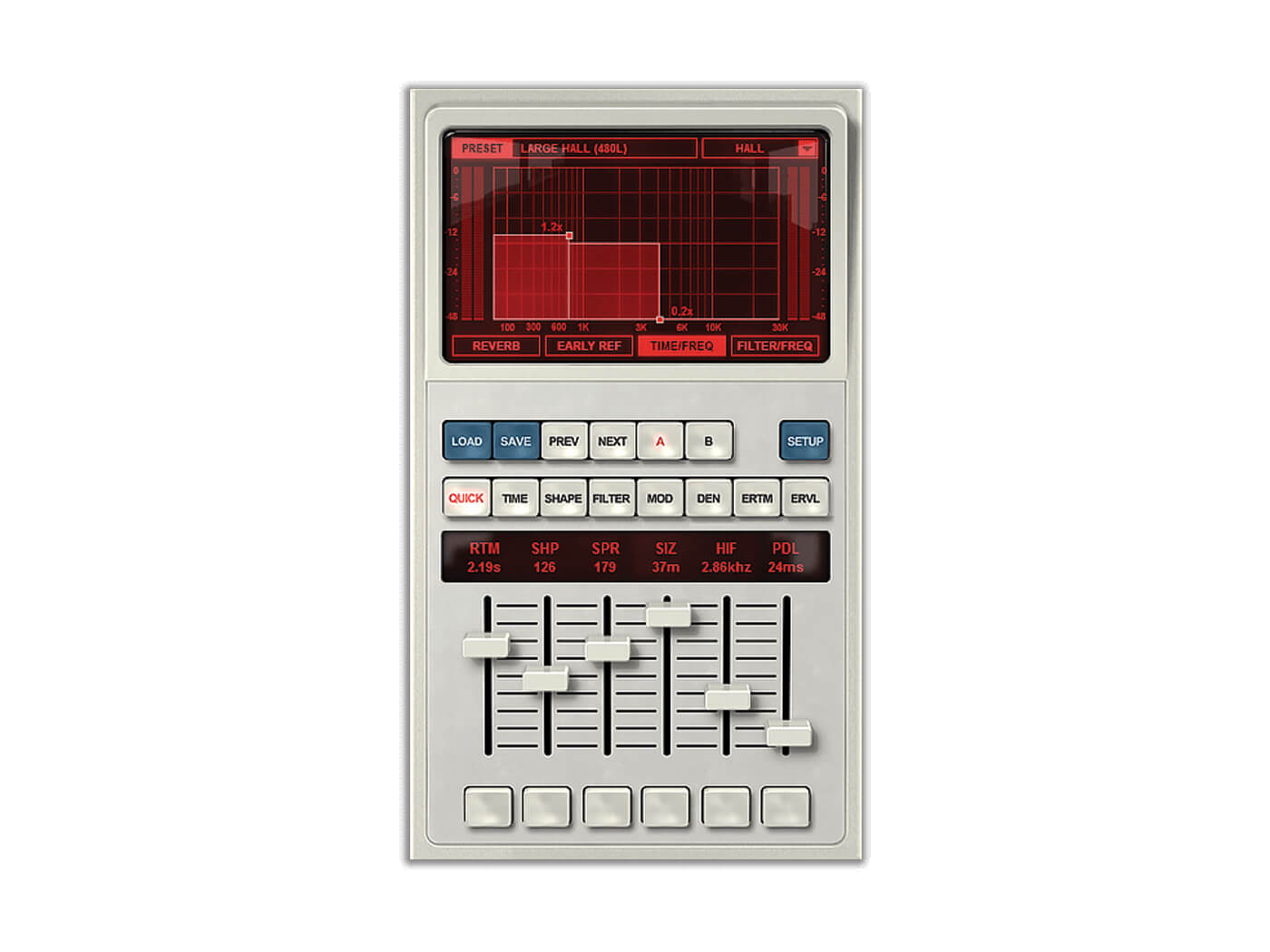 Up until the release of UAD’s Lexicon 480L, Relab’s LX480 is the closest I’d got to a Lexicon 480L in software form. It isn’t officially endorsed by Lexicon and lacks the full range of algorithms, but the key reverb settings found on the LX480 are near-identical to those of the original hardware.

This captures all the sonic charms of early 80s Lexicon reverb, which takes a prominent position in the soundtrack to the original Blade Runner. However, the 224 lacks the Random programs and chorus/delay effects found in the 480L, but when all is said and done, it’s still a fine-sounding reverb.