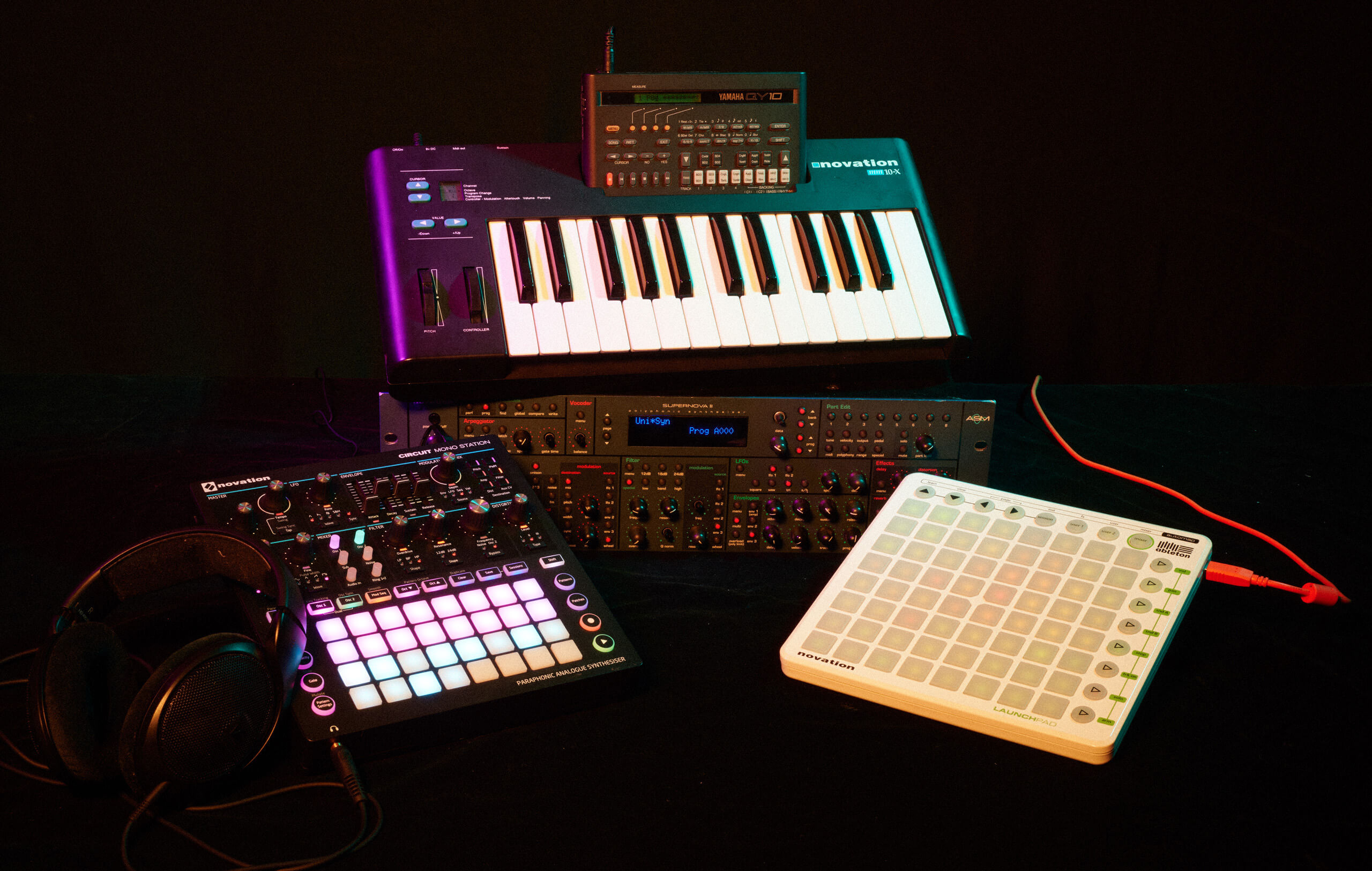 From the Bass Station to the Launchpad MIDI controller and Peak synthesizer, we trace the British brand’s impact on music technology.

If you don’t own any Novation gear, we’d wager you’ve at least considered a pick from its vast repertoire. For three decades, the British company has dared to be different. From its 1992 debut, the compact MM10 MIDI keyboard, and 1993’s formidable Bass Station, through to 2009’s seminal Launchpad and 2021’s quirky Circuit grooveboxes, Novation’s arsenal of powerful oddities is adored by musical heavyweights and newcomers alike.

Massive Attack, Groove Armada, TOKiMONSTA, Illa J, KiNK, Thom Yorke and Bonobo are among the myriad acclaimed artists with a Novation stamp somewhere in their setup. And, come on, how many brands can say they’ve partnered with Aphex Twin on a custom synthesizer?

This month marks Novation’s 30th anniversary – and there’s plenty to be celebrating.

Ian Jannaway and Mark Thompson founded Novation Electronic Music Systems in 1992 with a mission statement that still rings true today: to make music production more accessible. Novation created the MM10 MIDI keyboard that year to accompany the Yamaha QY10 – a portable 12-bit music-making workstation that was dubbed a ‘walkstation.’ The battery-powered synth and sequencer is pretty primitive, and Jannaway’s desire to play the QY10 with full-size, velocity-sensitive keys led to the inception of the ‘never-before-conceived’ MM10.

Sure, this two-octave MIDI keyboard is a far cry from the backlit buttons, sturdy sliders and tactile transport controls of Novation’s modern keyboards, but it was a practical solution to bring a “miniature workstation” to producers, as Jannaway says. Solving problems is the driving force behind Novation’s creations.

But even the MM10 had its artistic limitations. “It became clear that…we’ve got this two-octave thing. Let’s make it make some noises rather than just send MIDI data out the back,” Jannaway continues. A collaboration with the late synth designer and soon-to-be longtime Novation mastermind Chris Huggett – creator of the legendary OSCar and EDP Wasp synths – transformed the keyboard into the Novation Bass Station, which was a tremendous success.

Novation’s first monosynth harnessed the power of the Wasp’s filter, an analogue signal path, and digitally-controlled oscillators. Arriving at a time when music producers were hungry for sounds akin to the squelchy acid palette of the Roland TB-303, the Bass Station nestled nicely in the studios of Thom Yorke, William Orbit, Laurent Garnier, Nine Inch Nails, and Massive Attack, to name a few. It certainly had its questionable quirks – as did its sibling, the Bass Station Rack – but it remains a stone-cold classic synth.

Storming out of the late 90s and into the 00s – and feeding producers’ appetite for effects-equipped synths – was Novation’s Supernova series, launched in 1998. And, in true Novation fashion, it carried a record-breaking USP: “the launch of the Supernova rack was the first ever multitimbral synth with a complete multi-effects processor per part,” Jannaway told us in 2015.

Boasting ASM (Analogue Sound Modelling) digital oscillators and eight-voice polyphony, the Supernova and subsequent Supernova II were powerhouse polysynths and were loved by Orbital, Jean-Michel Jarre and A Guy Called Gerald. As the brand puts it, the Supernova synths were primed for the new millennium. You can explore the sounds of some of Novation’s classic synths in its Legacy Sample Pack.

Another innovation would disrupt the studios of producers in the early 00s, though – the DAW. To contend with the demand for software-based synthesizers and sequencers, Novation translated its iconic Bass Station and K-Station synthesizers into plugins. “We were selling about 1,000 a week of these things,” says Jannaway. So far, so good – until pirates had their way with Novation’s new software. “Within eight weeks, the software was cracked and killed it completely.” Thankfully, these synths saw the light of day again earlier this year and are now available as a free download.

The Novation team saw another opportunity in the face of this newfound predicament. As DAWs like Reason gained momentum, the question on the brand’s mind was ‘wouldn’t it be good to have a controller that mapped to the virtual instruments?’

Product manager Matt Derbyshire tackled this head-on with the Remote 25 MIDI keyboard in 2003. “Our goal was to make [software and controllers] work as seamlessly as possible, he says. Harking back to the goal of making music technology accessible, Matt and his team sought out a new type of controller – one that would make performing with software easier than ever before. Enter the Launchpad.

In 2009, after a string of tactical MIDI keyboard controllers with Automap tech, Novation’s 8×8 grid controller arrived as a companion for Ableton Live. You’ve certainly seen the launchpad in at least one of its many iterations. The slim, unassuming box was a hit on YouTube, giving rise to bedroom producers that were hell-bent on triggering samples, finger drumming and producing light shows with the Launchpad’s MIDI capabilities.

The Launchpad effect is still palpable today. French producer Madeon – a wunderkind in 2011 at age 17 – has racked up 59 million views at the time of writing on his 39-song mashup, Pop Culture. Meanwhile, American Launchpadder M4sonic boasts tens of millions of views on his lightshow-driven EDM mashups. And at the time, people that hadn’t even heard of Ableton Live suddenly wanted to get their hands on a Launchpad. After all, if a teenager could propel into stardom with a $120 piece of kit, why can’t you?

Novation ran with the Launchpad format and introduced the Launchpad Pro, the Launchkey, a Launchpad iOS app, and Launch Control. It was a wise move – you’ll still find the Launchkey and Launchpad in plenty of music studios today. It also laid the foundation for the Circuit groovebox lineup, which has landed in the hands of countless jammers and beatmakers.

Us modern-day producers are well-accustomed to a screen-based workflow, reliant on visual feedback to guide our creativity. Novation’s Circuit series turns that approach on its head – as is the norm with Novation – and encourages experimentation. It’s easy to watch and follow a screen but it’s liberating to get hands-on and make happy accidents.

As TOKiMONSTA says of the more recent Circuit Rhythm: “It really plays into the intuitiveness of building music. And you lose that when you’re constantly making music on the computer. It became really fun to lose yourself in this creative process.”

The company’s recent focus has been on its return to polysynths, with the Peak and Summit helping the brand climb to the top of producers’ wishlists. Though they fetch over $1,000 a piece, they bring immense power to the studios of all types of music makers, shouldering out the need to splash out on vintage synths to achieve ‘true character.’

If you’re yet to be an owner of a Novation synth, groovebox or controller, don’t fret. History tells us that the brand is ready to change up the game again at any moment. That’ll be your chance to get ahead of the curve.