Updating a modern classic with a new colour scheme and a heavy dose of artist influence, Novation and Aphex Twin present a synth like no other. 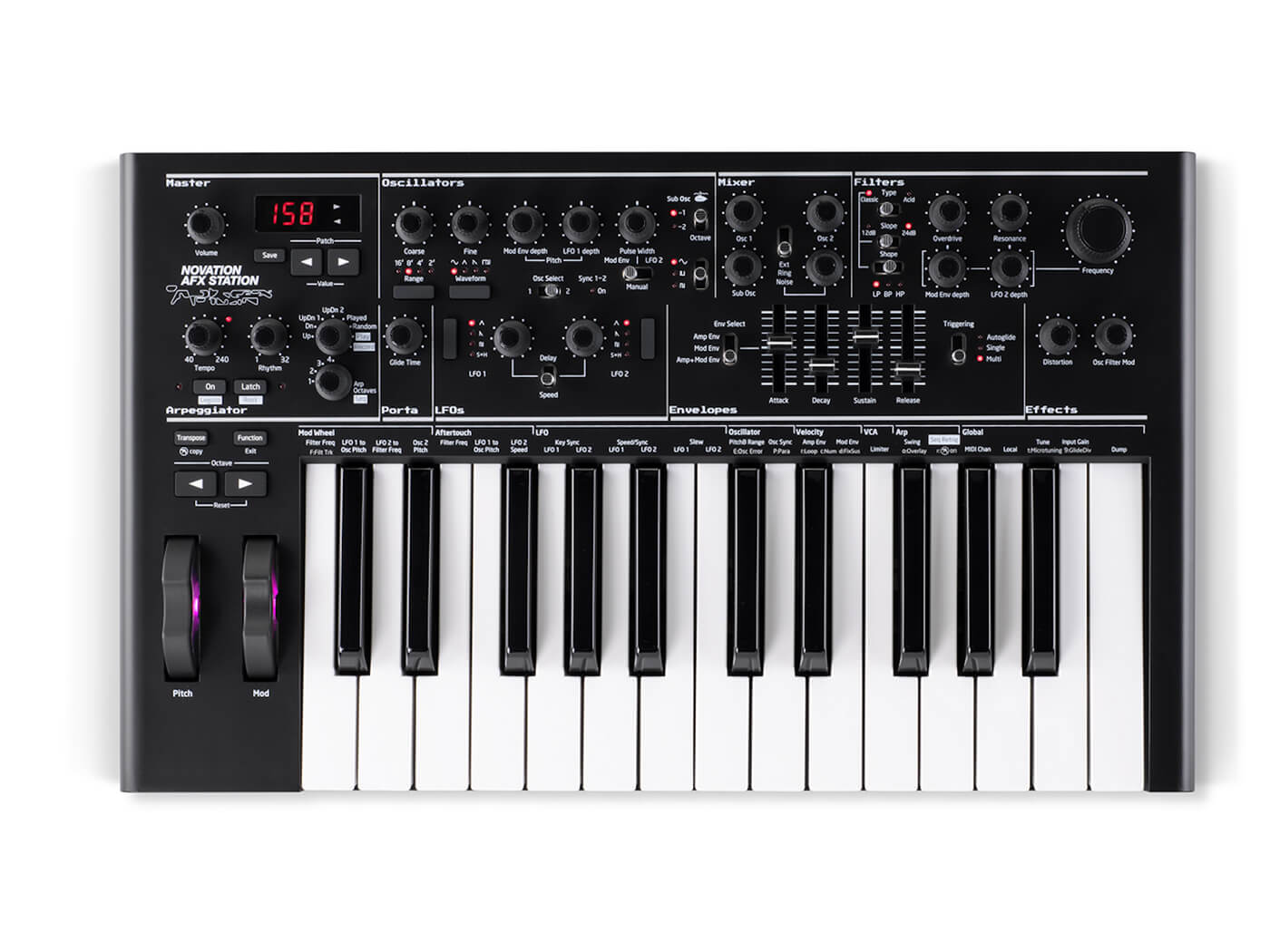 Novation’s iconic Bass Station appeared in 1993. Aside from its familiar analogue architecture, it was celebrated for its ability to mimic the Roland TB-303. This modern alternative to Roland’s quintessential unit, whose second-hand price had been escalating since release, was welcome. Further revisions of the Novation synth followed, with this humble monosynth undergoing a rack-mounted rebuild that saw the sound of the Bass Station take its place in studio racks across the globe.

It was a pleasant surprise, then, when Novation released the equally applauded Bass Station II twenty years on from the original unit’s unveiling, in 2013. This new version had similar musical leanings but with greater potential and functionality, further expanding in 2018 with v2.5 firmware. Now the Bass Station II has benefited from a further makeover, this time courtesy of electronic-music icon Richard D James.

Unsurprisingly for an artist with as strong a visual brand as Aphex Twin, the new AFX Station adheres to James’s classy, if occasionally cacophonous, aesthetic. The most striking difference between the AFX Station and the existing BSII is the colour scheme. Gone is the turquoise in favour of a fresh black panel with crisp white legends, with some text elements taking on pixelated forms. The underside is purple, as are the illuminated pitch and mod wheels.

On paper, this might sound garish and overstated. But, like most things James puts his name to, it looks stylish, even as it flaunts the famous Aphex Twin logo, along with other icons, such as the submarine next to the sub-oscillator.

This theme extends to the faders and pots, with the latter’s caps now bedecked in a glossy black. The pots do sport a notch to help indicate position, but we find that against the black background, it can be challenging to determine the precise position. Reintroducing the white line down the pot shaft might aid use, though it would alter the aesthetic.

As with the BSII, the AFX Station’s construction is sturdy, with solid pots all round. The keyboard is two octaves in size, with a synth action that feels slightly underwhelming as a playable keyboard. It does the job but, given the quality elsewhere, it feels below AFX par.

We must make it clear that, fundamentally, the AFX Station is a Bass Station II. If you have a BSII, you may already have benefitted from 2019’s firmware update v.4.14, which brings all the power and functionality of the AFX Station to the standard BSII. However, with the AFX aesthetic overhaul, Novation has updated the front panel labelling making it far easier to locate additional functionality. 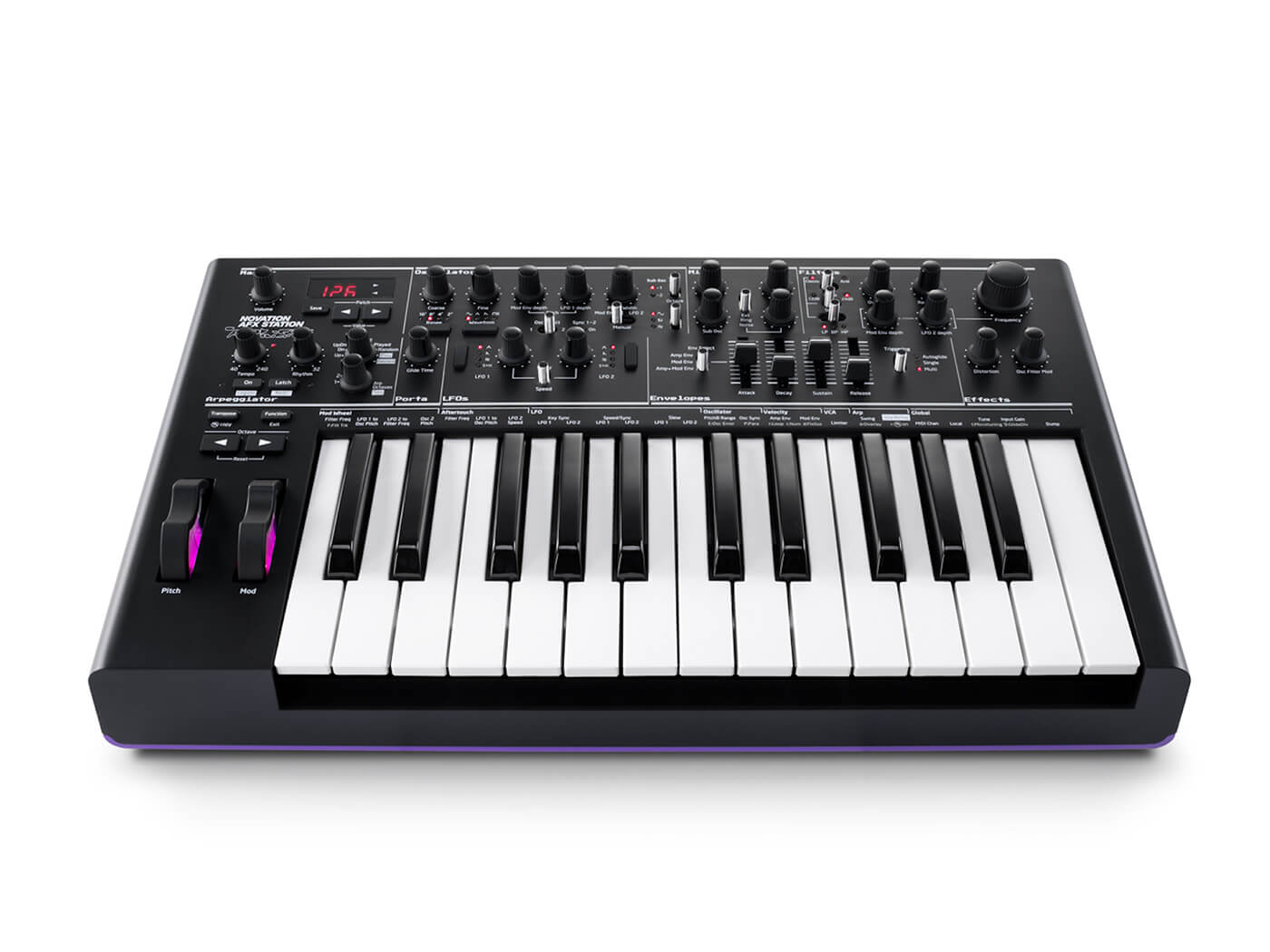 The AFX Station’s signal flow begins with two analogue oscillators. Both feature fine and coarse pitch tuning over four octaves. The unit’s wave choices are sine, triangle, saw and square. And, the last of these allows for pulse-width modulation, either manually or from envelope and LFO. The oscillators can be blended via independent pots located in the mixer section. Here, you’ll also find a level control for a sub-oscillator, which is switchable between three wave sources, with a range of minus one or two octaves. This will be more than enough to keep 303 fans happy, but the fourth source pot also allows for either an external signal, white noise or ring modulation. The gritty-sounding ring mod beats sumptuously with each tweak of the oscillator tuning.

You’ll get even more grit from the filter, which offers Classic and Acid modes. In Classic, you can switch the filter between 12dB (two-pole) and 24dB (four-pole), available in low, high or band-pass options. Acid mode fixes the slope to 24db in low-pass mode and invokes a diode ladder-filter design. You get some of the inevitable low-end signal drop-off here, but you can easily add those frequencies back in with a filter-based overdrive control.

While the AFX Station doesn’t employ any reverb or delay effects, there are two distortion elements at the end of its single chain. The more traditional distortion and less conventional oscillator filter modulation are superb resources for either squealing 303-style effects or more sedate colours that can shore up already impressive signals. 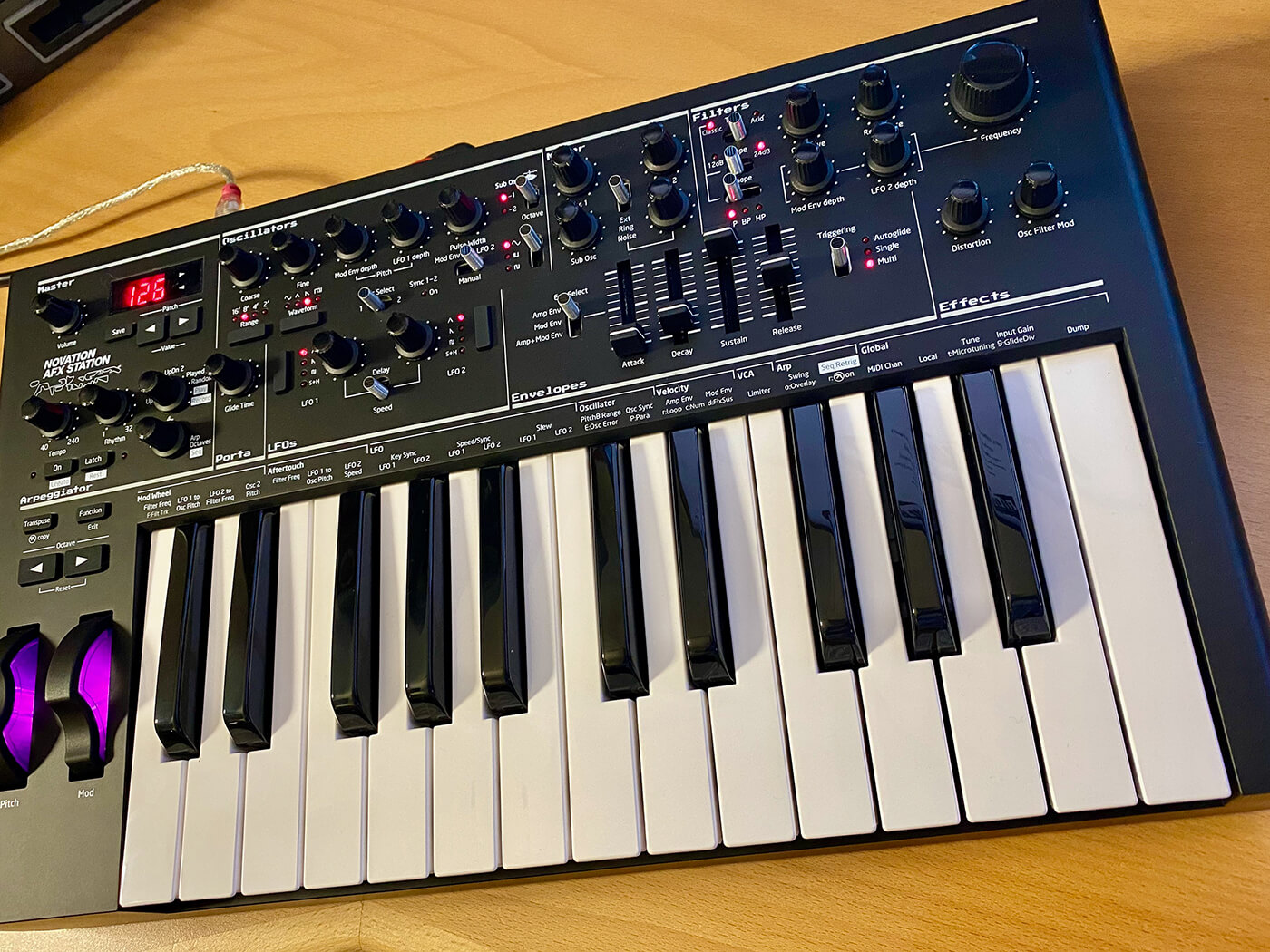 One of the most significant recent additions to the BSII firmware, now finding its rightful place on this new model, is the AFX Mode. To activate this, you’ll have to hold the Function button and double-press a note. This note is indicated with text on the AFX Station not present on previous BSII models. Entering AFX Mode allows each key to be populated by an overlay.

In essence, each overlay is a patch that’s specifically assigned to one of the notes on the keyboard. Overlay banks consist of up to 25 different per-note overlays, which means it’s possible to set bass and drum sounds at the key level and trigger them in turn. But remember: this is still a monosynth. You can still only play one instance of an overlay (one note) at a time, with results switching from ordered to chaotic in an instant. Employ this alongside the arpeggiator in random mode, and you’ll have instant access to Aphex Twin’s signature effects.

The two onboard ADSR envelopes allow you to fix the sustain phase’s duration, much like the Hold function found on many other synths. Furthermore, the envelopes operate in a looped mode, providing a Serge-like element that’s generically useful, particularly in AFX Mode. With this, you can introduce complex rhythmic elements while controlling the envelope faders via the front panel.

From the moment you switch the AFX Station into AFX Mode, you’ll be swept up by the potential to craft the kinds of genre-defining sounds for which Aphex Twin is famous. The synth comes armed with 128 presets, designed with James’s sounds in mind and lovingly created by artists such as Noise Lab and Richard Devine. Many of these are found in the overlay component of the unit’s AFX Mode, and the majority of them are typical Aphex: busy, gnarly and chaotic. These sounds won’t appeal to everyone but they illustrate how impressive and diverse the Bass Station II continues to sound. If you want to make room for your own patches, you’ll have to overwrite some of the 64 user locations. Patch management is available via Novation’s online Components service, which allows for the remote recall and storage of patches and overlays.

Already own a Bass Station II? The firmware upgrade is worthwhile, though you’ll likely need to keep the accompanying update manual close by to help you recall which combination of function buttons and keyboard notes to press to access certain functionalities. Don’t own a BSII? This lovely hardware update is a solid place to start, and its clean-cut look comes with all-new legends and typography to help guide your way.

The Novation AFX Station represents incredible value. You don’t have to try very hard with the AFX to get a great sound, and with more time and experimentation, complexity in sound design will follow. It’s an impressive performer in the more traditional subtractive synthesizer sense, while AFX Mode adds a layer which could be very useful for playing live, or jamming in the studio. The AFX also looks very cool, which is a great selling point, as if the pricing isn’t sensible enough! It sounds deep, expansive and fantastic, and that’s what we all want in a great synth.