by MusicTech.net
#Gear Of The Year 2019#Plug-ins
Features

Gear Of The Year: Best software effect/utilities of 2019

Could iZotope make it three years in a row of conquering the software effect/utility category? Time to find out. 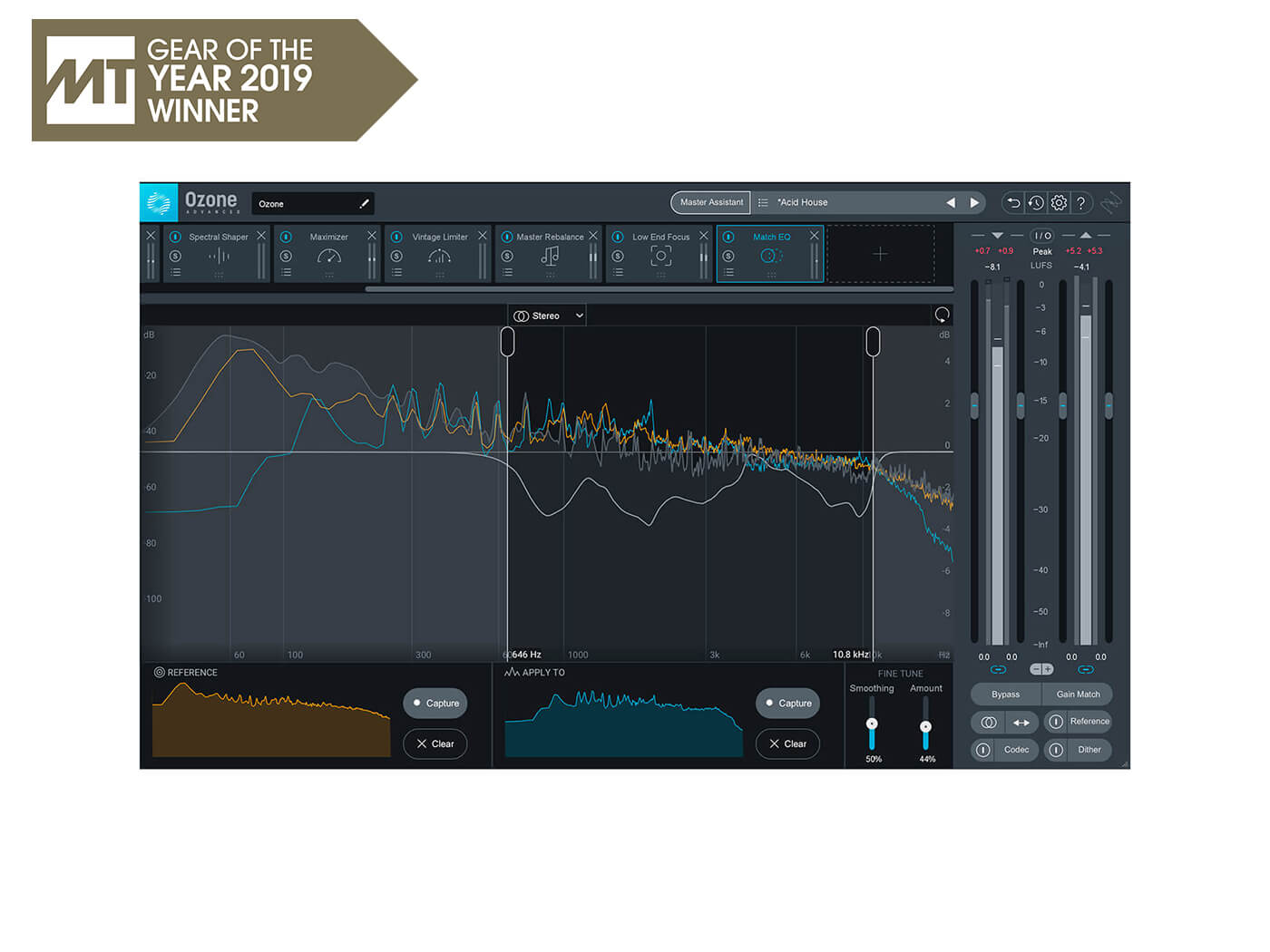 It’s not a huge surprise to once again find ourselves handing this gong to iZotope, the company has have been picking up our Best Software awards for many years so it’s no surprise that it heads to the podium once more this year with mastering package Ozone 9. It is available in Elements, Standard and Advanced versions, with the latter including extra features and plug-ins, and a total of 15 modules that can now all be loaded together into a mega channel strip. These include vintage processors, a couple of EQs, a Dynamic EQ, multiband Dynamics, multiband Exciter, multi-band Stereo Imager, Maximizer and Spectral Shaper – everything, in short, for top notch mastering. There are plenty of ways to view and analyse your audio plus a Mastering Assistant to give you some preset ideas and ways to go about the process.

Reviewer Alex Holmes was blown away by the latest version: “If you’re new to Ozone, and looking for some mastering software, then this really is the most complete, tailored package available. It was already a superb, fully-featured tool for mastering duties and this new version adds some useful, cutting-edge modules, while refining some other features and offering an improved, smoother GUI. It is a solid update with some great, unique new modules and useful enhancements across the board.” 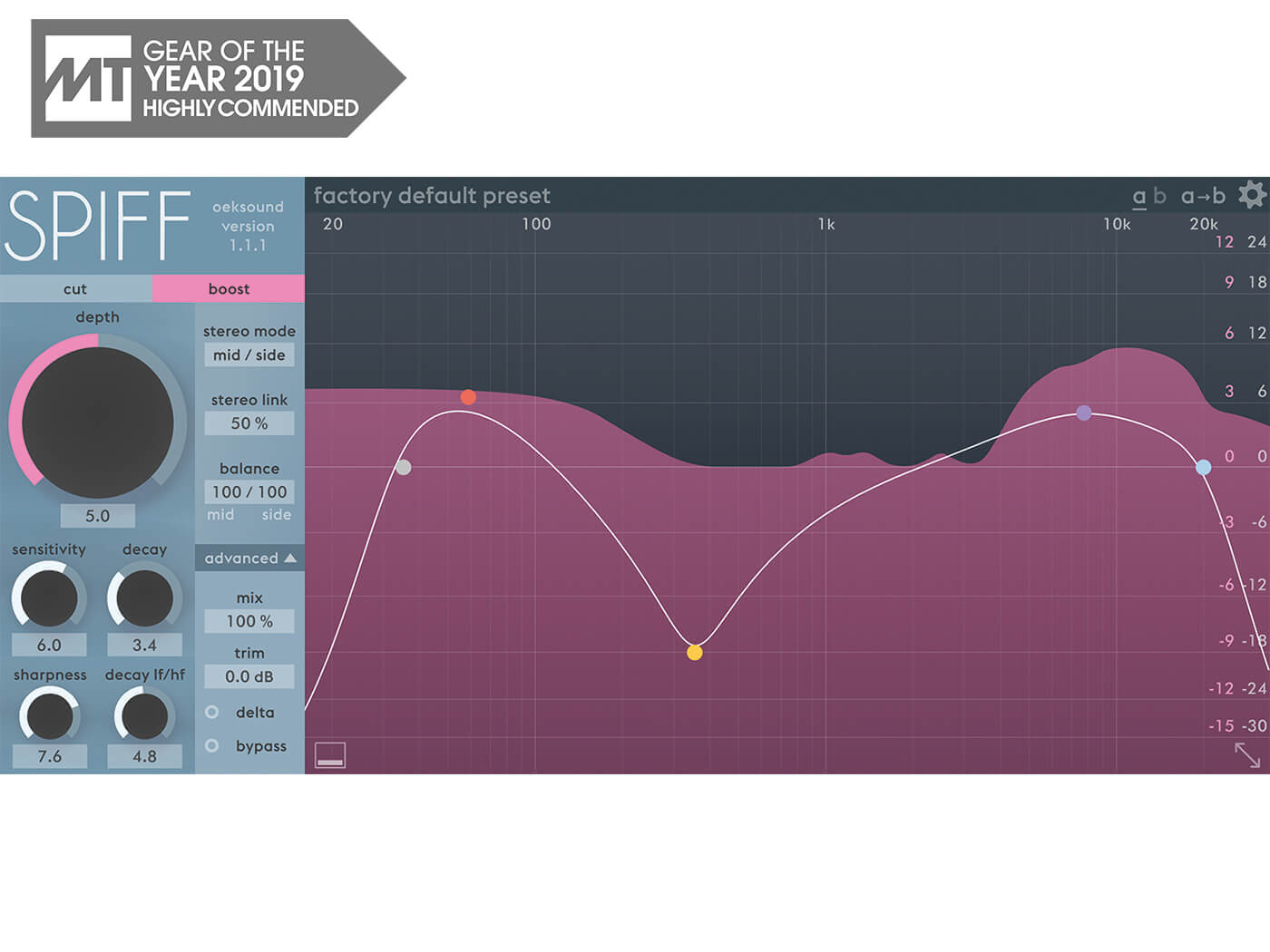 Transient shapers seem to be the ‘in’ processor at the moment – if indeed software effects can be on trend. Essentially they are replacing compressors to be a more controlled tool for the dynamics of your audio. The oddly-named Spiff is a great example, an adaptive transient processor that analyses and targets your audio, allowing you to cut and boost your transients with extreme detail, either smoothing or adding punch and gating along the way. “It’s a well-designed, cutting-edge tool with deep control and transparent-sounding results that could easily find a unique place in your plug-in library,” said Alex Holmes, so a worthy winner of a Highly Commended award. 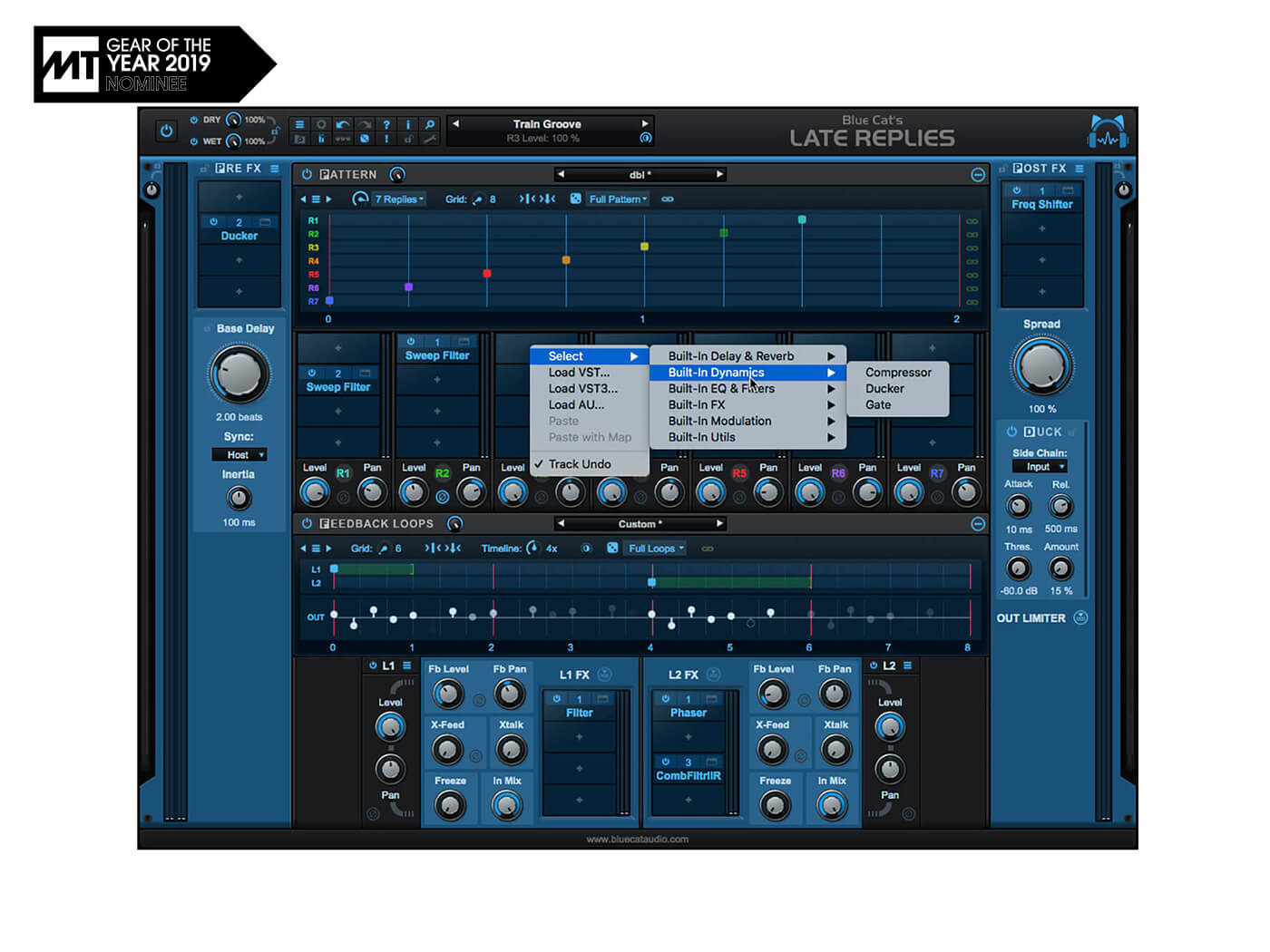 Possibly the most flexible delay plug-in currently available, Late Replies proves that there’s much more to delay than just creating echoes. What sets Late Replies apart is the ability to load other plug-ins into it. Want your favourite distortion VST or AU plug-in inside your delay line? No problem! And, boasting up to eight taps or ‘replies’ to use Blue Cat’s parlance, you can get exactly as complex and creative with your delays as you like. In short, it blew us away. 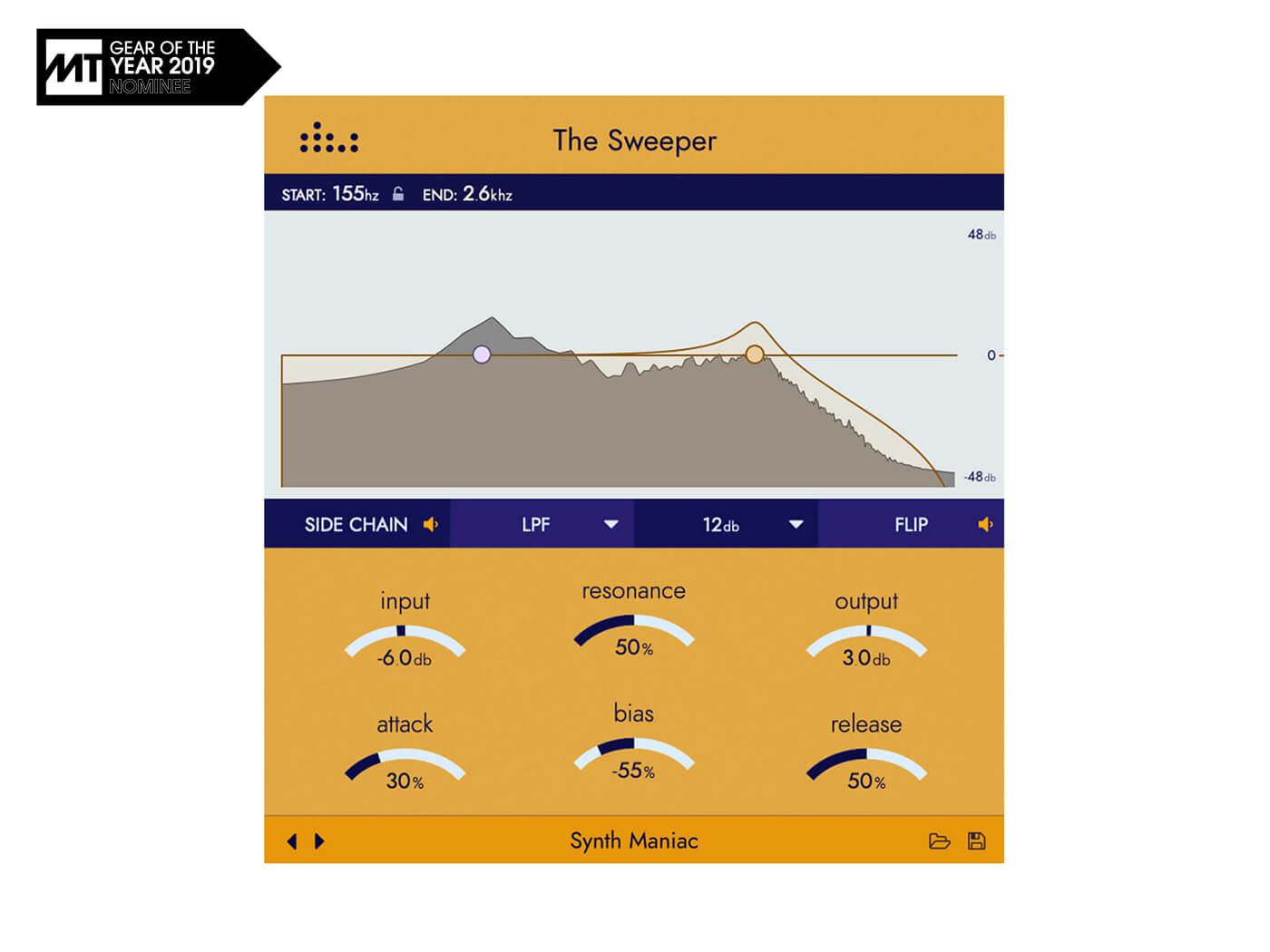 Getting your kick drum and bass to sit nicely together is a perennial challenge and one that’s often solved with sidechain compression. However, Denise Audio’s The Sweeper offers an alternative approach. Instead of ducking the level of your bass whenever the kick hits, The Sweeper brings up a low-cut filter to carve away the bottom-end momentarily. The result is remarkably transparent, too.

However, this cleanly designed plug-in can do a lot more than that. With high and low-cut filters, resonance, attack and release controls, it can add movement to any flagging mix.

The Lexicon 480L is undoubtedly one of the most iconic pieces of pro studio gear going, and with good reason. Its reverb algorithms were, for a long time, second to none. The 480L was synonymous with broad and all-encompassing reverbs and, for some, it represented the apex of Lexicon’s achievements. So, when a Lexicon-endorsed UAD recreation came along, we had to take notice.

Universal Audio manages to recapture every bit of magic that the original had, offering Plate, Hall, Room, Random Ambience, Twin Delays and Effects algorithms. If you’re looking for the sound of the hits, look no further. 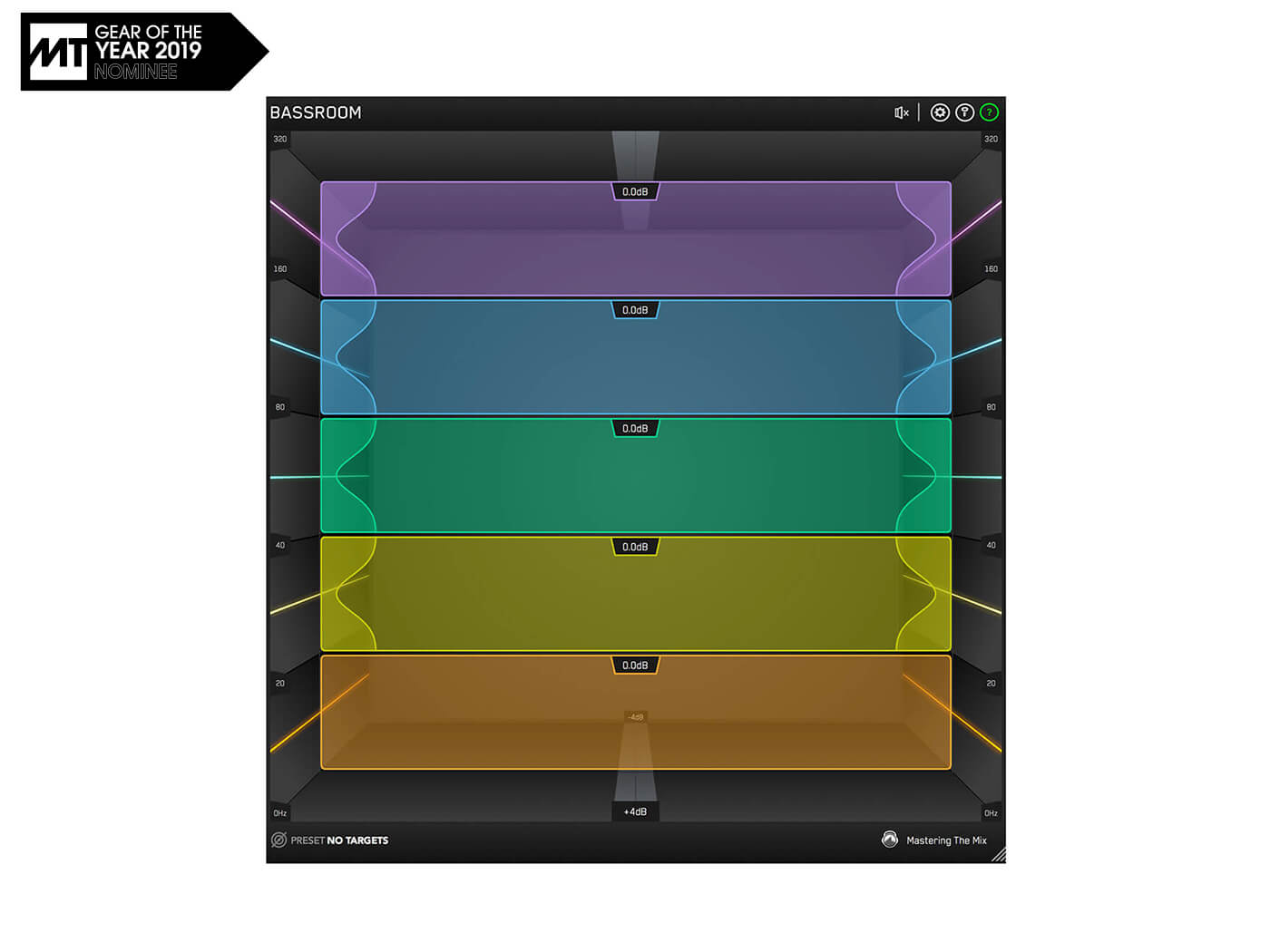 BASSROOM is the plug-in equivalent of a thermometer that can tell you when your low-end is mixed just right. And while that might sound like nonsense, it comes from mastering engineer Tom Frampton and it’s rather impressive.

Designed to be used just before your mastering limiter, BASSROOM intelligently compares your mix to a its built-in, genre-based targets. You can even load in your own reference tracks as a target. Regardless of genre, you could probably benefit from using BASSROOM, especially if your playback system isn’t giving you enough low-end information. 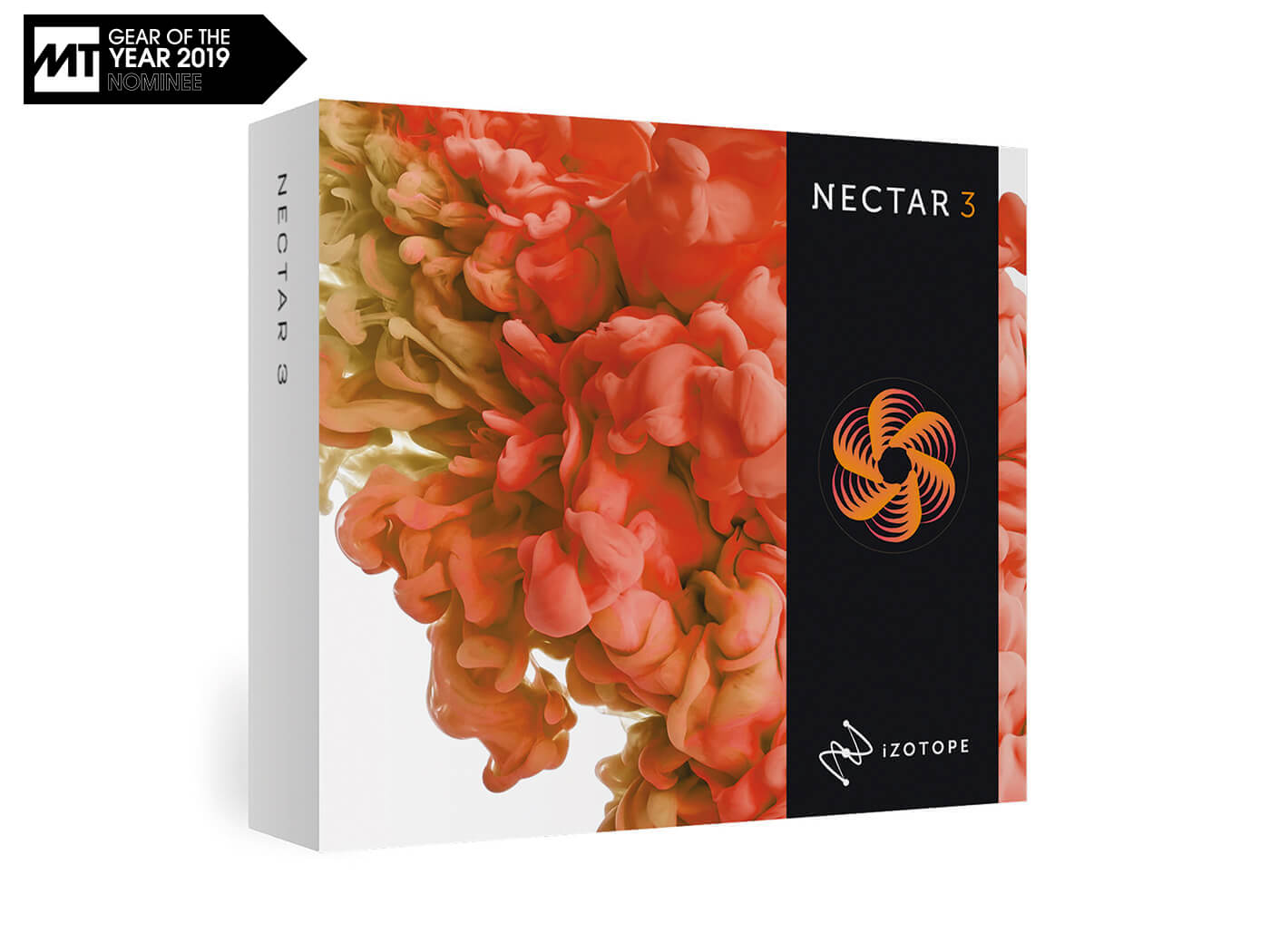 iZotope’s version 3 update to their Nectar vocal production suite adds AI learning in the shape of a Vocal Assistant and Unmask feature lifted from Neutron. Pair that with a versatile new EQ with dynamic EQ modes, two new saturation modes for the built-in delay, stereo width control and automatic volume compensation and this is an impressive package.

Instead of providing its own pitch correction, iZotope has partnered with Celemony to offer Melodyne Essential worth $99. If you want a one-stop-shop of a plug-in for polished vocals, Nectar is a solid choice. 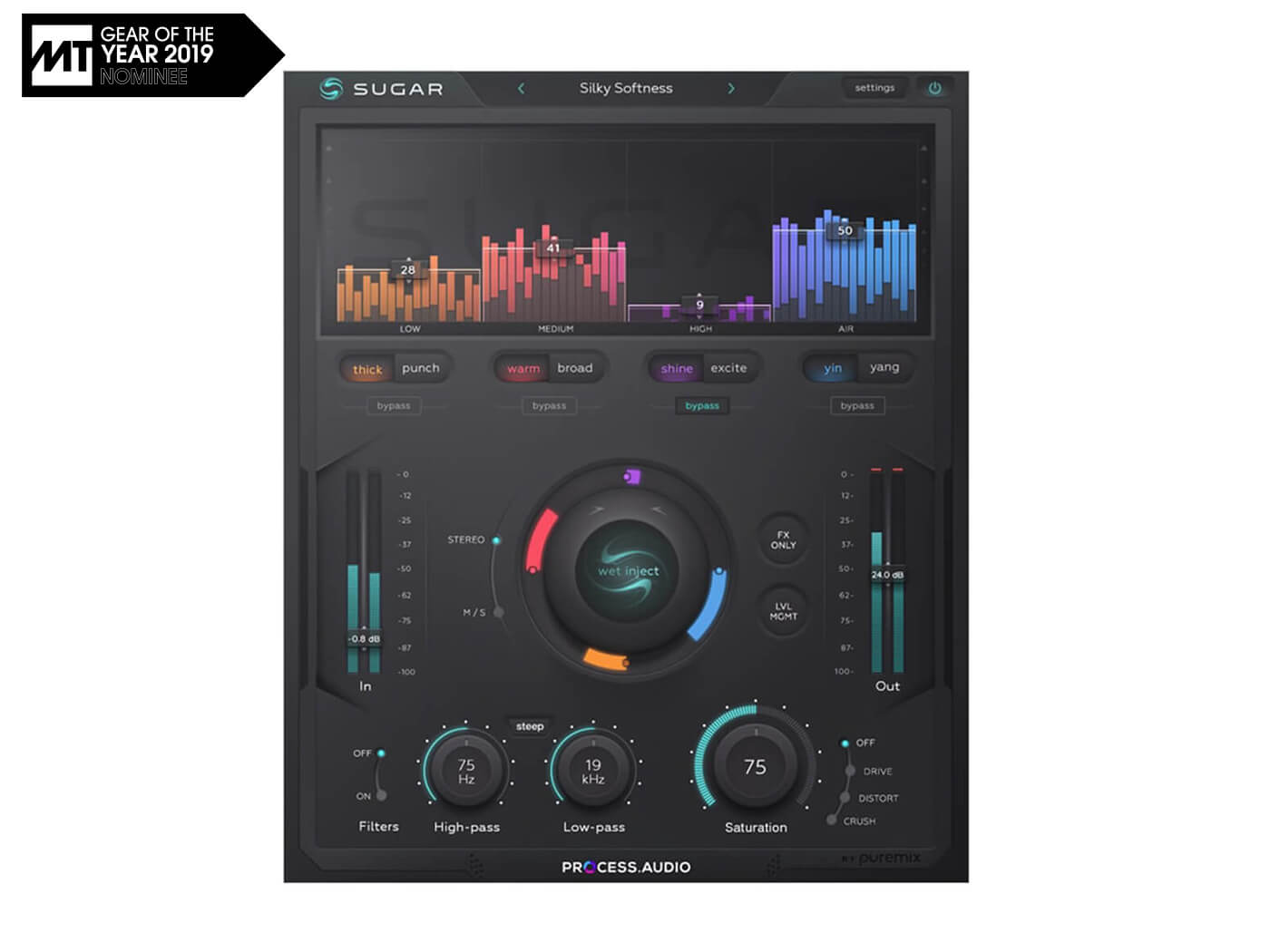 Sugar is an analogue-inspired audio sweetener, bringing a modern digital approach to the kinds of sounds you’d expect to hear from an Aphex Aural Exciter processor, or the old ‘Dolby A trick’. In short, it’s a multiband exciter and processor with various styles of distortion available for making your mix sound more exciting. And who doesn’t like excitement? 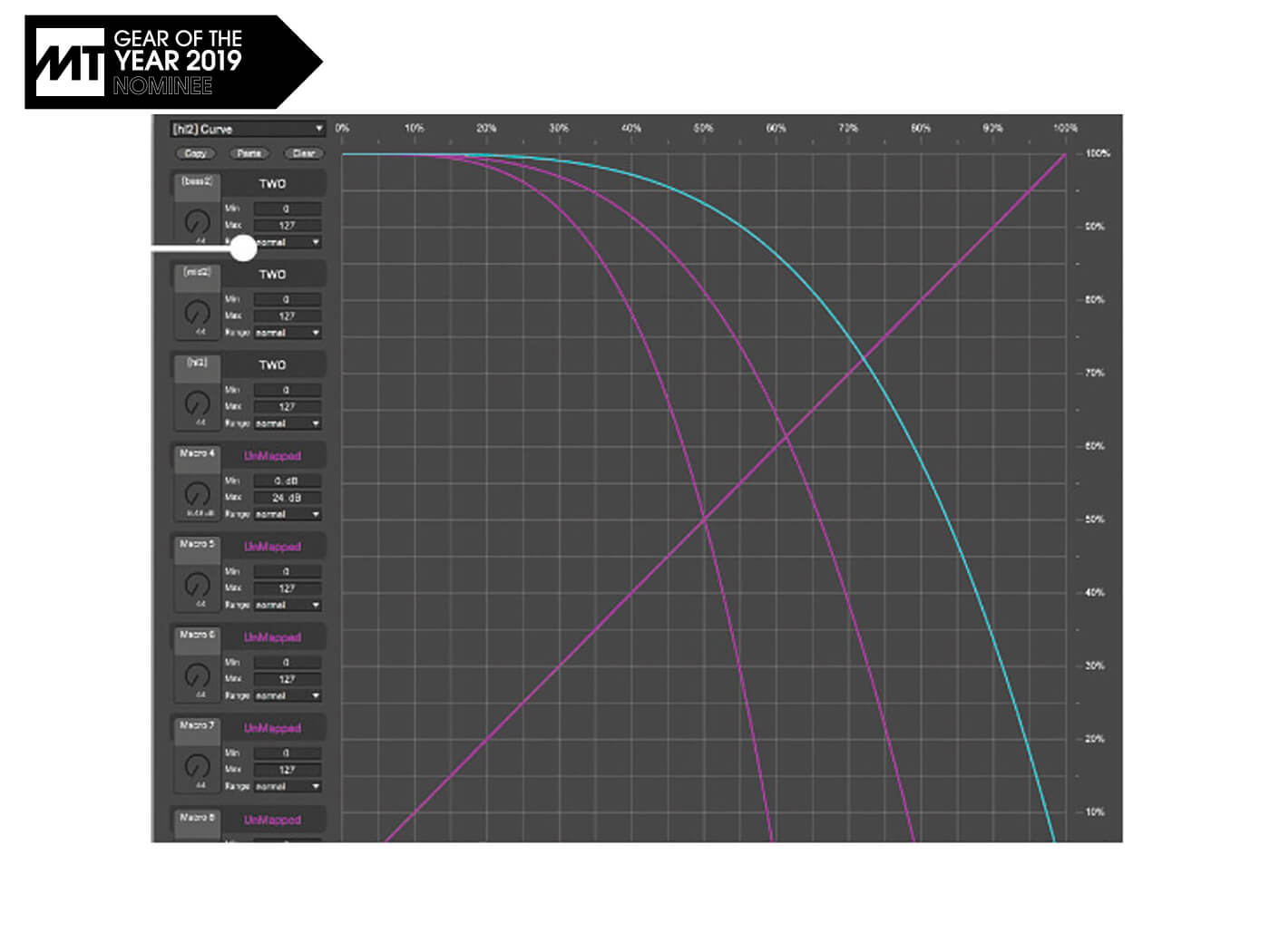 While the Modular Series from Isotonik Studios may not, on first inspection, appear to be more than a utility, it’s capabilities are enormous. By using the wizardry of Max/MSP, which is now built into Ableton Live, Isotonik has made a tool that extends your performance possibilities with new Follow Actions in Live, plus add macros, loop like a DJ and more.

Available via DSP on Apogee Ensemble and Element audio interfaces, and natively on your host computer, this range of plug-ins manages to straddle the great DSP divide. FX Rack comprises ModEQ 6, a licensed Pultec EQP-1A model, ModComp and Apogee’s Opto-3A compressor. With their first proper foray into the world of plug-ins, Apogee has maintained its excellent reputation built on years of hardware design. 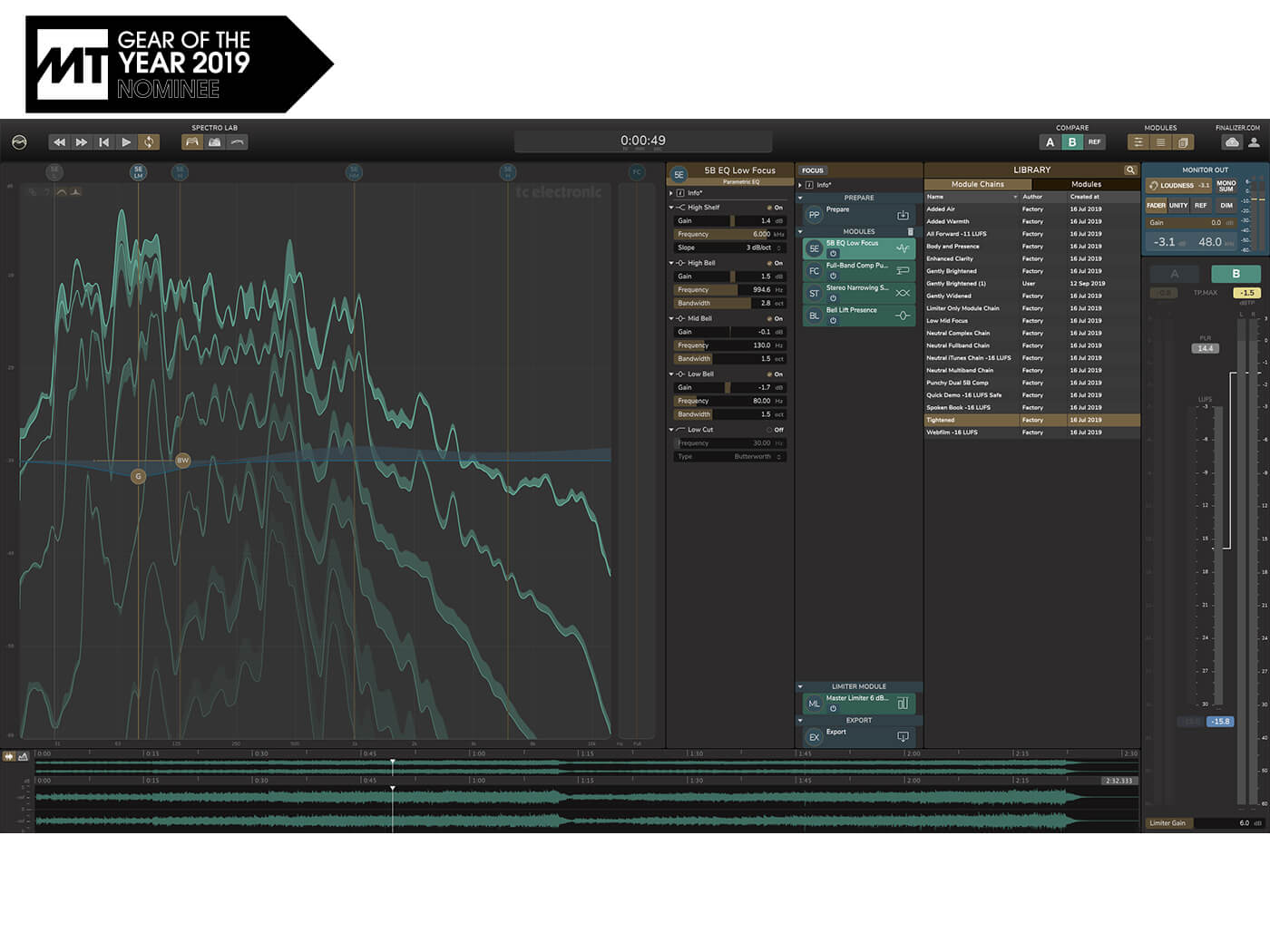 TC Electronic changed the world of mastering forever in 1996 when they unleashed the Finalizer. Now, over two decades later, they have reimagined the one-box mastering processor as a standalone mastering suite. Algorithms have been compiled from the exorbitantly expensive System 6000 and include compression, EQ and limiting.

The fact that it doesn’t come as a plug-in will put some users off, but if you have any desire to escape your DAW and get great mastering results quickly, this is an enjoyable way to get there. 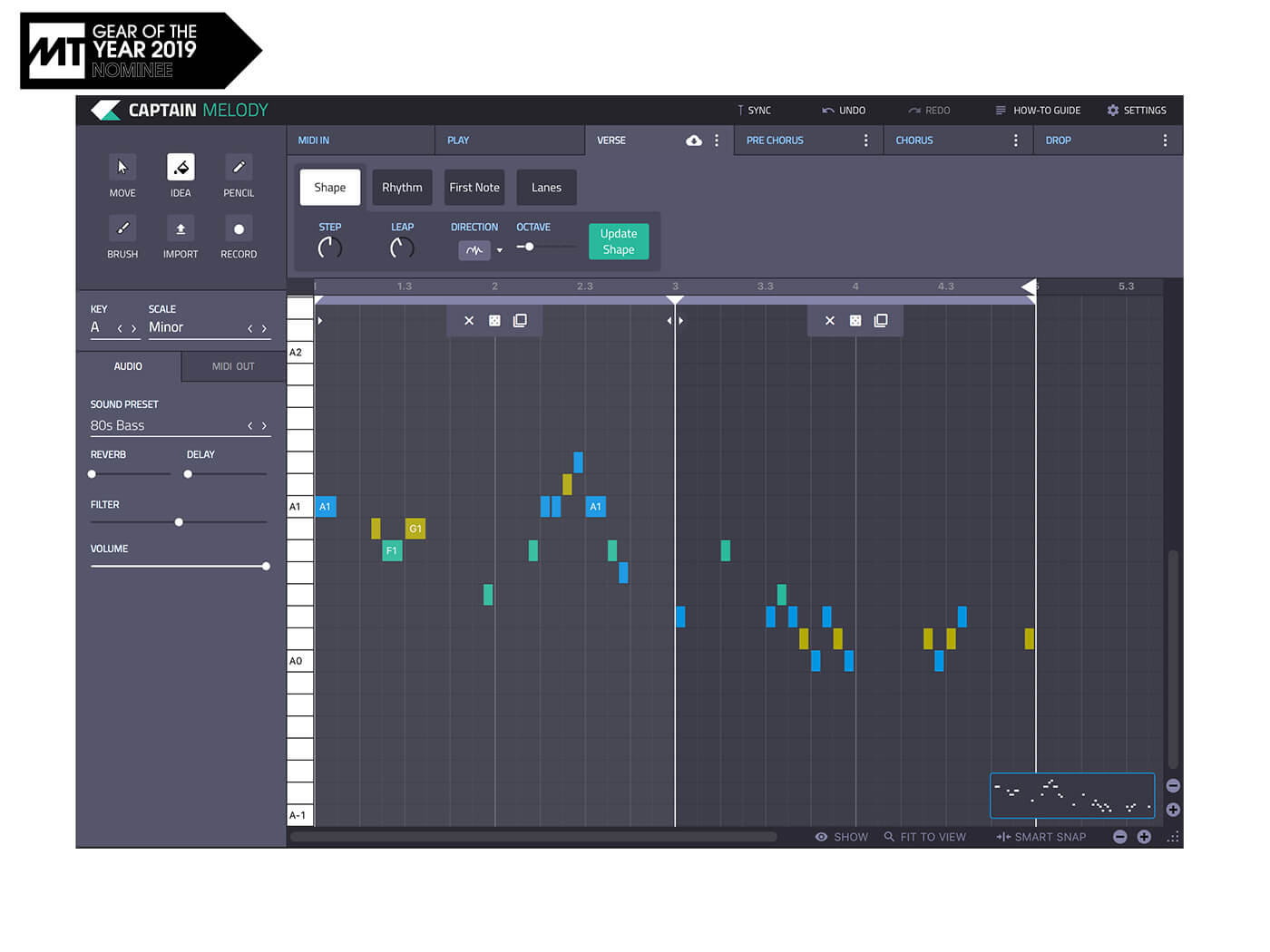 It might not initially appear to be the most exciting piece of software going, but with support from huge names such as David Guetta and Kaskade, Mixed In Key’s plug-ins deserve a serious look. In their version 3.0 plug-in bundle, the company has focused on helping you make interesting new melodies. Captain Melody will take a MIDI melody played in or drawn, then let you manipulate the shape, density, rhythm, variation and more.

This huge update gives you much more control over your melodies and lets you imprint your own creativity instead of letting the software compose for you.

On top of this, the Captain Plugins 3.0 bundle includes Captain Chords, Captain Play and Captain Deep and these all talk to one another. 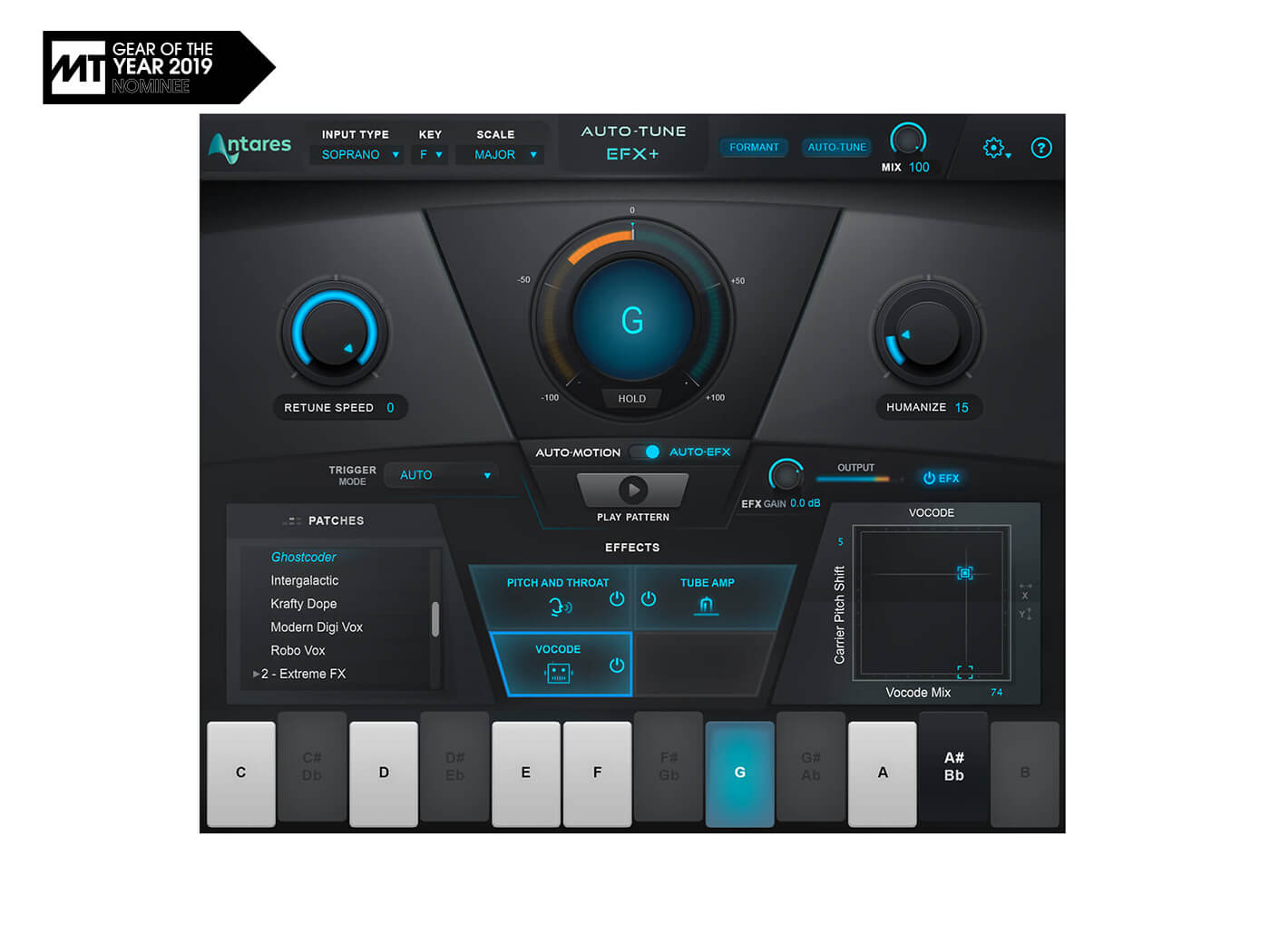 No longer regarded as just a surreptitious method of fixing out-of-tune vocals, Auto-Tune effects have imposed a distinct and deliberate sonic character of their own over the decades. EFX+ and Artist are cut-down versions of Antares’ flagship product that deliver all of the Auto-Tune sound with minimal fuss or faff. They even include the classic, less transparent Auto-Tune 5 algorithm.