Apogee has an impressive reputation with pro-audio hardware, but will its new venture into software maintain it? We plug into FX Rack.

Using external DSP to support your DAW is nothing new. Pro Tools has had that trick up its sleeve for years and Universal Audio has gone all-in on this approach, doing great business from selling plug-ins for the platform via its online store. Now Apogee, a company with a formidable reputation in the pro audio world, is getting into the onboard DSP arena with its Ensemble Thunderbolt and Element series audio interfaces, with an accompanying foray into producing plug-ins for the platform.

However, unlike Pro Tools, which requires different versions of a plug-in for DSP or native processing, and Universal Audio, whose plug-ins only run on UAD hardware, Apogee’s approach allows its plug-ins to run on either its external DSP or on the host computer. This means you don’t need Apogee hardware in order to run the plug-ins (although you do at present need a Mac computer – Windows support is on its way).

This inaugural release is a suite of four plug-ins comprising two EQ and two dynamics processors. However, these do not appear as individual plug-ins in your plug-in list; rather, a single Apogee FX Rack plug-in is shown. This acts as a wrapper into which instances of the individual processors can be loaded, rearranged and managed. As well as enabling the plug-ins to work seamlessly when handing off the DSP work to Apogee hardware (if present), the wrapper allows you to monitor and adjust the processing chain’s input and output levels, view DSP workload, and manage effect-chain presets.

The two EQs – like the two compressors – offer a choice between modern- and classic-style processors. ModEQ 6 is a parametric equaliser with high- and low-pass filters, two peak/notch bands and two peak/shelf bands. The plug-in’s interface has handles to adjust each band, and shows curves of each band’s individual effect as well as the cumulative EQ curve, all overlaying a real-time spectrum analysis of the signal. Each EQ band can be switched between constant or proportional Q mode, and can be solo’d so that only that band’s effect can be heard (so the other EQ bands are bypassed).

Sound-wise, ModEQ 6 performs very well, giving a clean and accurate response, without sounding clinical or harsh. The wide Q range and switchable Q mode, along with the ability to switch two bands to notch mode, makes for a very flexible and adaptable processor. The interface takes some getting used to, though, as it’s surprisingly devoid of buttons and controls. Only the currently selected band’s controls are shown, and really the user is compelled to use the graphical handles as opposed to dialling in parameters with knobs and faders. If, like me, you like to see at-a-glance the specific value being used by an EQ, this may be offputting, but the graphical control and feedback is well implemented, so it isn’t too difficult to adapt.

The second EQ processor, the Pultec EQP-1A, is a much more esoteric affair. It features a low band that’s switchable between 20, 30, 60 and 100Hz, and that can be simultaneously boosted and attenuated (the boost and cut curves and responses differ, giving interesting
tone-shaping possibilities when applied together). This is followed by a boostable peak band with adjustable Q, which can be switched between 3, 4, 5, 8, 10, 12 and 16kHz, and a shelving high band at 5, 10 or 20kHz that can only be attenuated.

It’s an odd setup to be sure, but it delivers results that ooze with character, and which allow you to pull off some classic production tricks on kick drums, bass guitars and vocals. It also works well at brightening up a dull or flat-sounding mix. Apogee’s modelling work here has been excellent, earning it both the licence and endorsement of the owners of the original Pultec designs, not to mention many plaudits from producers familiar with the original hardware.

Moving on to the dynamics processors, we find a similar blend of modern and classic. ModComp is a fairly standard VCA-style compressor that, with high ratio and quick attack and release, can also turn its hand to limiting duties. The plug-in delivers great results – clean rather than characterful, but very transparent and very effective at controlling signal dynamics. The high-pass filter and switchable peak/notch/shelf EQ band on the processor’s sidechain also help with sculpting the effect.

Best of all, though, is the fabulous visual feedback the plug-in provides. The compression curve graph is overlaid with a real-time signal level, which shows clearly when the signal is exceeding the threshold and how much compression is being applied as a result. Alongside this is a panel that shows up to the last 10 seconds of the signal being processed, with a gain-reduction graph overlaid. This combination of visualisations is so intuitive to read and understand, it’s a wonder more dynamics processors don’t use it – I love it!

Finally, we come to the Opto-3A compressor. While this is not a licensed or official model of any specific hardware, it’s clearly been inspired by the classic Urei LA-3A compressor. Like all good optical compressors, the Opto-3A has a single simple Peak Reduction control with which to adjust the intensity of the effect – turning this up is akin to simultaneously reducing the threshold and increasing the ratio on a VCA-style compressor. 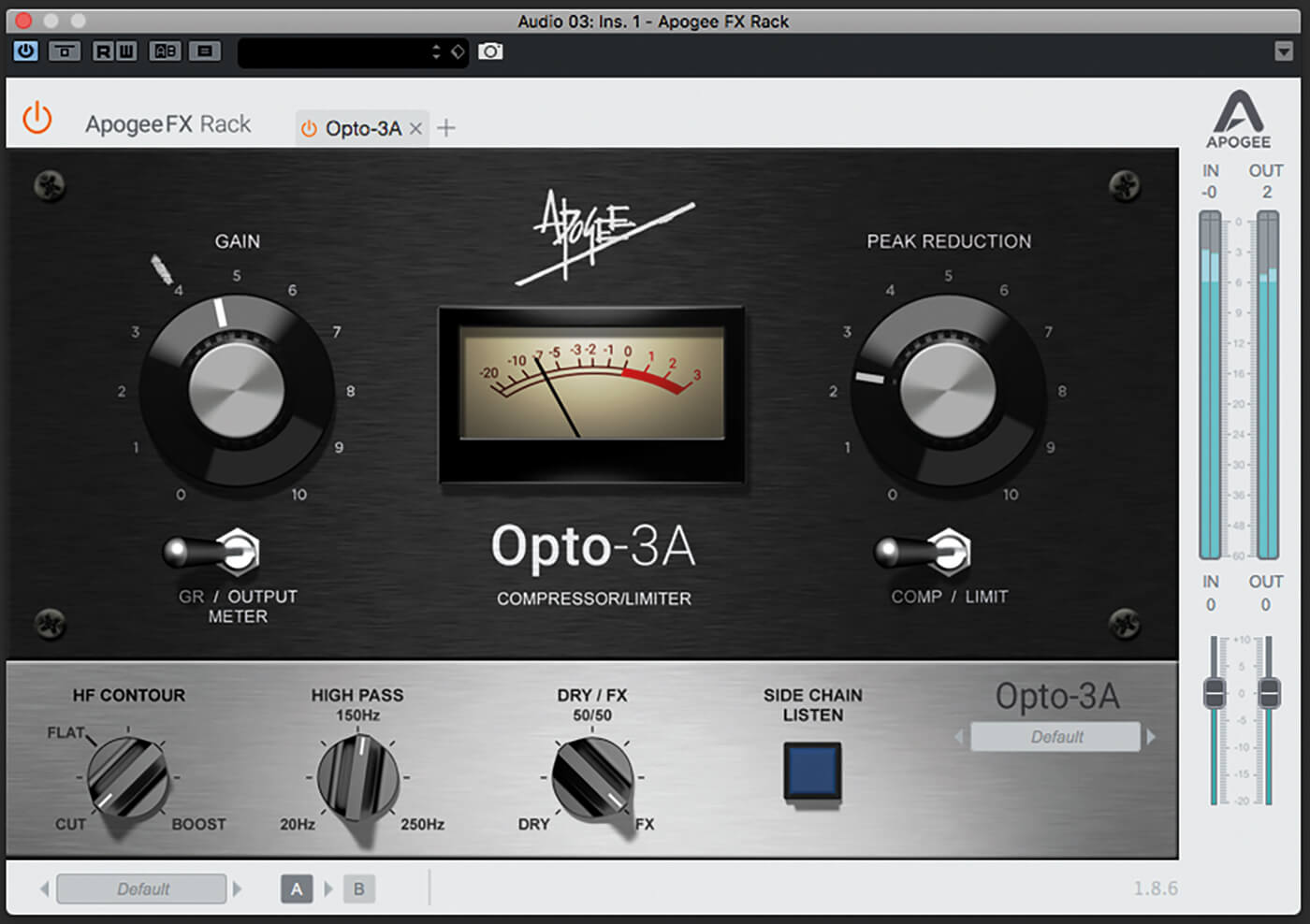 A second chunky dial controls the make-up gain, while the plug-in’s needle-style meter can
be switched between monitoring gain reduction and output level. As with ModComp, Opto-3A’s sidechain signal has some EQ available to it, enabling you to hone the way the processor responds to the incoming signal. Opto-3A oozes quality in its results but, being an optical compressor, it’s not best suited to all tasks, although it really comes into its own when dealing with guitar, bass and vocal signals.

There’s no doubt that the FX Rack plug-ins are of a quality that matches and maintains Apogee’s reputation, and are well-chosen as initial releases. But what’s really exciting about Apogee’s venture into software is that it’s open to all, not just those who’ve invested in Apogee hardware. The company may be going out on a limb by doing this, as the captive plug-in market has always been an attraction for manufacturers of DSP-based processing. But it’s fantastic news for users, who can inject a bit of Apogee’s pedigree into their work without needing to have a complete rethink on hardware, and who can look forward to an ever-growing collection of top-notch plug-ins.

There are loads of EQ and dynamics processors out there, and some exceptionally good ones at that. Compared to these, the Apogee FX Rack is both realistically priced and up there with the best of the best – well worth considering if you’re looking for some top-notch multitasking plug-ins for your rig. Both hardware emulations are excellent, and the Pultec EQP-1A is both licensed and endorsed by Pultec’s current owners.

But really, it’s Apogee’s DualPath technology, which allows the plug-ins to run natively on the host computer or on dedicated Apogee DSP hardware, that really sets this apart from the competition, eliminating the significant lock-in engendered by other DSP-based systems. So, even if you’re not planning on going DSP any time in the near future, Apogee FX Rack is worth some serious consideration.

UA’s take on the Pultec EQP-1A comes as part of a trio of Pultec-inspired plug-ins. Whether Universal Audio’s model is as accurate as Apogee’s licensed and endorsed one is a question for another day but, unlike the Apogee, it will only run on the dedicated UAD hardware.

This model of a classic opto-compressor is – like Apogee’s Opto-3A – an unofficial copy of the classic UreiLA-3A from the 70s. While the interface design is not quite as close to the hardware as is the Apogee, the sonic results are very similar between the two.