iZotope returns with another high-tech new version of Ozone, but can it deliver the mastering goods? We prepare to find our balance. 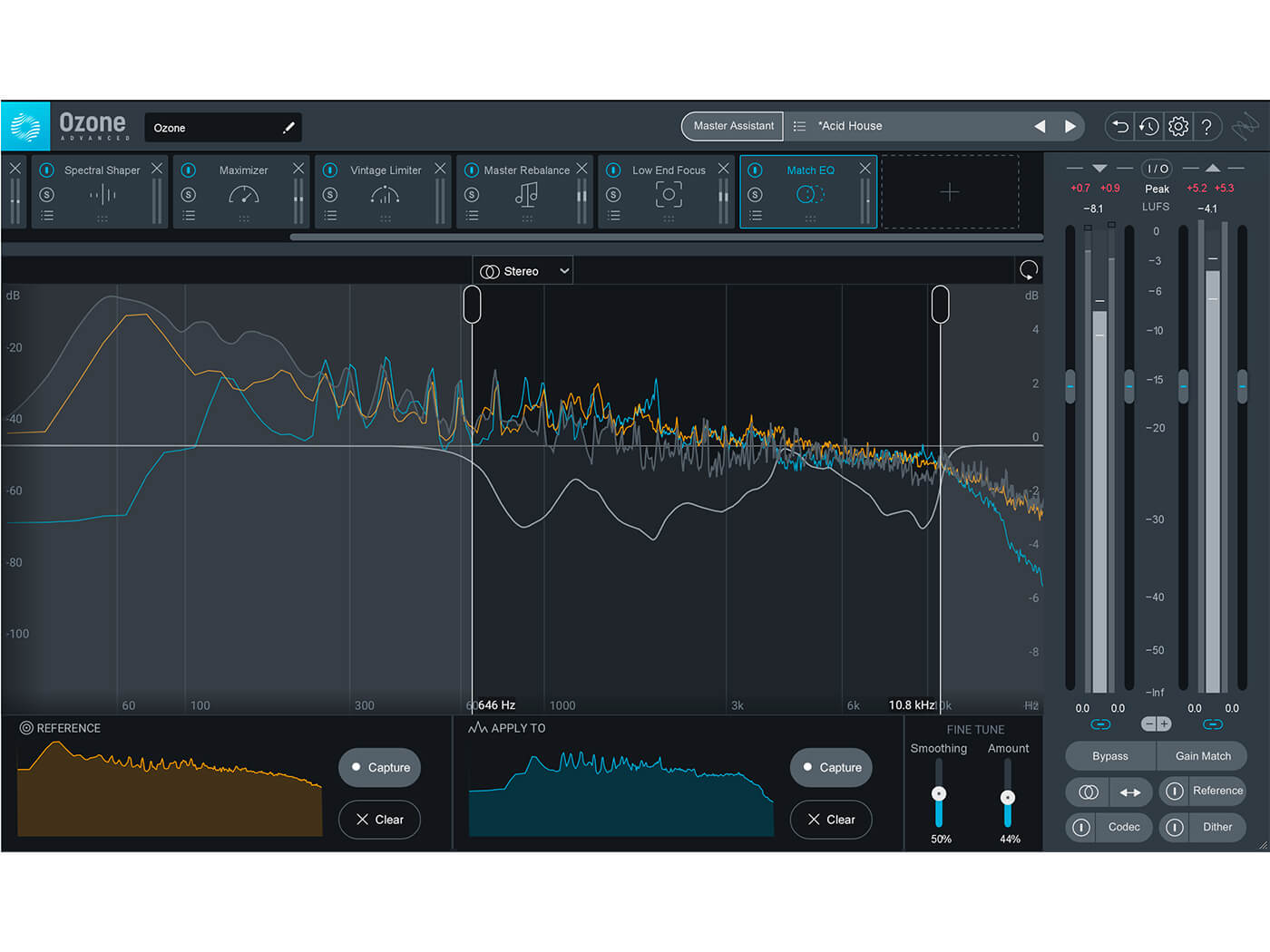 Ozone 8 was released two years ago and since then, we’ve seen some excellent updates to Nectar and Neutron, so it’s (let’s be honest) unsurprising that iZotope has released a new version of its mastering plug-in suite. Ozone 9 once again features a range of cutting-edge software tools that incorporate source separation, spectral processing, inter-plug-in communication and machine learning, but do the new features and modules make for worthy additions to an already well-rounded product?

Loading up Ozone 9 Advanced in Logic for the first time will scan for 17 new Audio Units(!), so prepare for your iZotope sub-folder to grow significantly once again. This includes the main plug-in and its component modules, including the new Master Rebalance and Low End Focus modules, plus the Match EQ as its own plug-in and the Relay and Tonal Balance v2 tools. 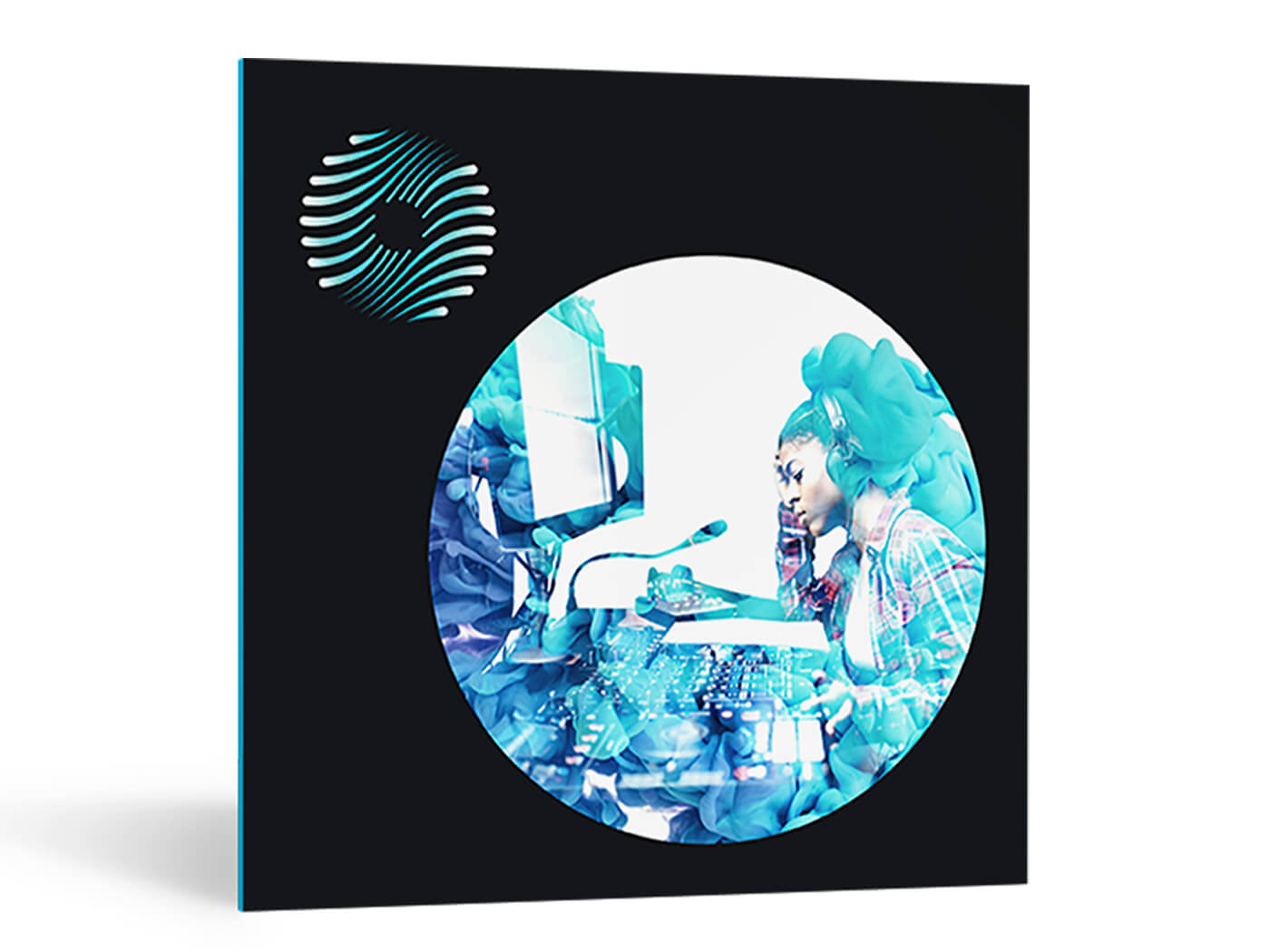 There’s also the standalone version for those that want to master outside the DAW. I’ve been using Ozone since version 3 and it’s been reviewed in these pages many times over the years, so I’ll keep the synopsis brief and skip to the new and exciting bits. Ozone 9 is available in Elements, Standard and Advanced versions, with the latter including some extra features, modules and break-out component plug-ins.

As with previous updates, some of the older modules including the Vintage EQ, Compressor, Limiter and Tape have now been made available in the Standard package, making it an even more appealing proposition. The main Advanced version of the plug-in features a total of 15 modules that can now all be loaded together into a mega channel strip, which is a significant improvement compared to Ozone 8’s measly six slots (although your computer may hate you for loading all 15).

The modules include the aforementioned Vintage processors and new effects (more on these shortly), alongside two EQs, a Dynamic EQ, multiband Dynamics, multiband Exciter, multi-band Stereo Imager, Maximizer and Spectral Shaper. You also get additional built-in tools such as the Codec Preview, the ability to load and toggle reference tracks, bypass gain matching and extensive Dither controls. Visually, everything is made better and clearer by the fact that you can now resize the window to fill the screen, making it easier to see waveform details and things like the gain reduction on the Maximizer.

The analysers and meters are also much smoother, which makes them easier to read. However, the Dynamics Module slightly falls short of the Compressor in Neutron 3, which has slightly clearer waveforms and a useful Threshold control superimposed over the waveform itself.

On to the new stuff! If you’ve used RX7, then you’ll be aware of the technology behind the new Master Rebalance module, which lets you reach inside a stereo file and adjust the level of the vocals, bass or drum parts by plus or minus 8dB. It is, quite frankly, witchcraft. The fact it works in real time and is surprisingly transparent makes it an incredibly useful tool for making quick adjustments and trying out new balances. The only shame is that you can only pick one of the three to manipulate, so you can’t, for example, increase the bass and vocal at the same time. This is mostly likely due to CPU constraints though, and you could potentially use an additional plug-in instance if you really wanted to.

The second major new module is Low End Focus, which lets you home in on a portion of the low-frequency content of a mix and manipulate the separation between the percussive and bass elements. The controls are fairly simple, with Punchy or Smooth modes, a positive or negative Contrast slider and an additional gain control, plus a useful Listen button so you can hear just the effected audio elements.

It’s easy to use to get quick results, but you have to be careful you don’t overdo it and end up with too much kick or an over prominent bass, as a little goes a long way and it might not work on every track. It’s a simple but effective tool, though and like the Master Rebalance Module, one that uses clever audio separation to get results that would be impossible by other means. Even if you don’t want to use these modules on your final master, it’s a great way to quickly test out different balances that can be used to inform your final mix. 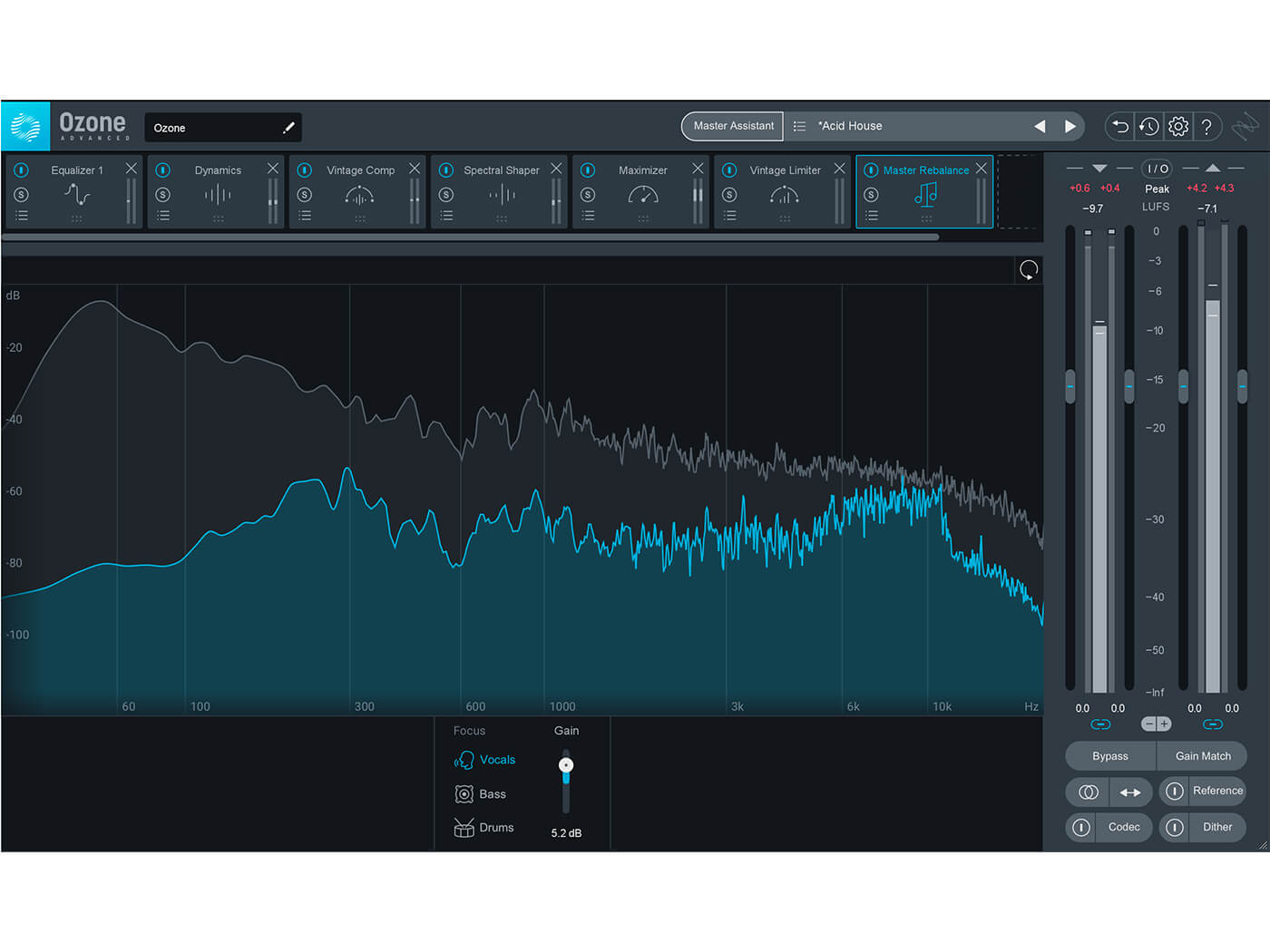 Although the Master Assistant in Ozone 8 was a surprisingly effective and useful tool for giving you an AI-based preset starting point, it was fairly limited in what came out the other side. New to Ozone 9, you can now choose a Vintage option, which uses the more characterful modules to give a more analogue and coloured-sounding master, as opposed to the clean and transparent Modern setting.

It’s nice to have the option and this is definitely a step in the right direction, but it still feels like there’s room to take things further, as many of the modules are still not utilised. Interestingly, there are slight differences when comparing the Master Assistant settings created on Ozone 8 and 9 using the same track, which makes me think they may have made some adjustments to the algorithms.

As for the other new additions, there’s an excellent new Stereoize Mode 2 in the Imager module, which sounds much more natural and transparent on all material than the slightly phasey Mode 1, although this is still available as an option. There are also improvements to the Match EQ, which now has its own module and the ability to focus the effect on a specific band. Perhaps most useful though, is the ability to save EQ profile snapshots as presets, with a handful of useful ones included.

Finally, the Tonal Balance Control plug-in has been updated to version 2, with better inter-plug-in communication, more spectrum presets and a very useful band-solo function, although you still can’t edit the crossovers. Like Neutron 3, Ozone has seen some refinements under the hood that result in quicker loading times and improved performance. That said, we don’t really notice a big difference to the CPU hit in our tests, although the displays themselves are definitely smoother and more detailed. 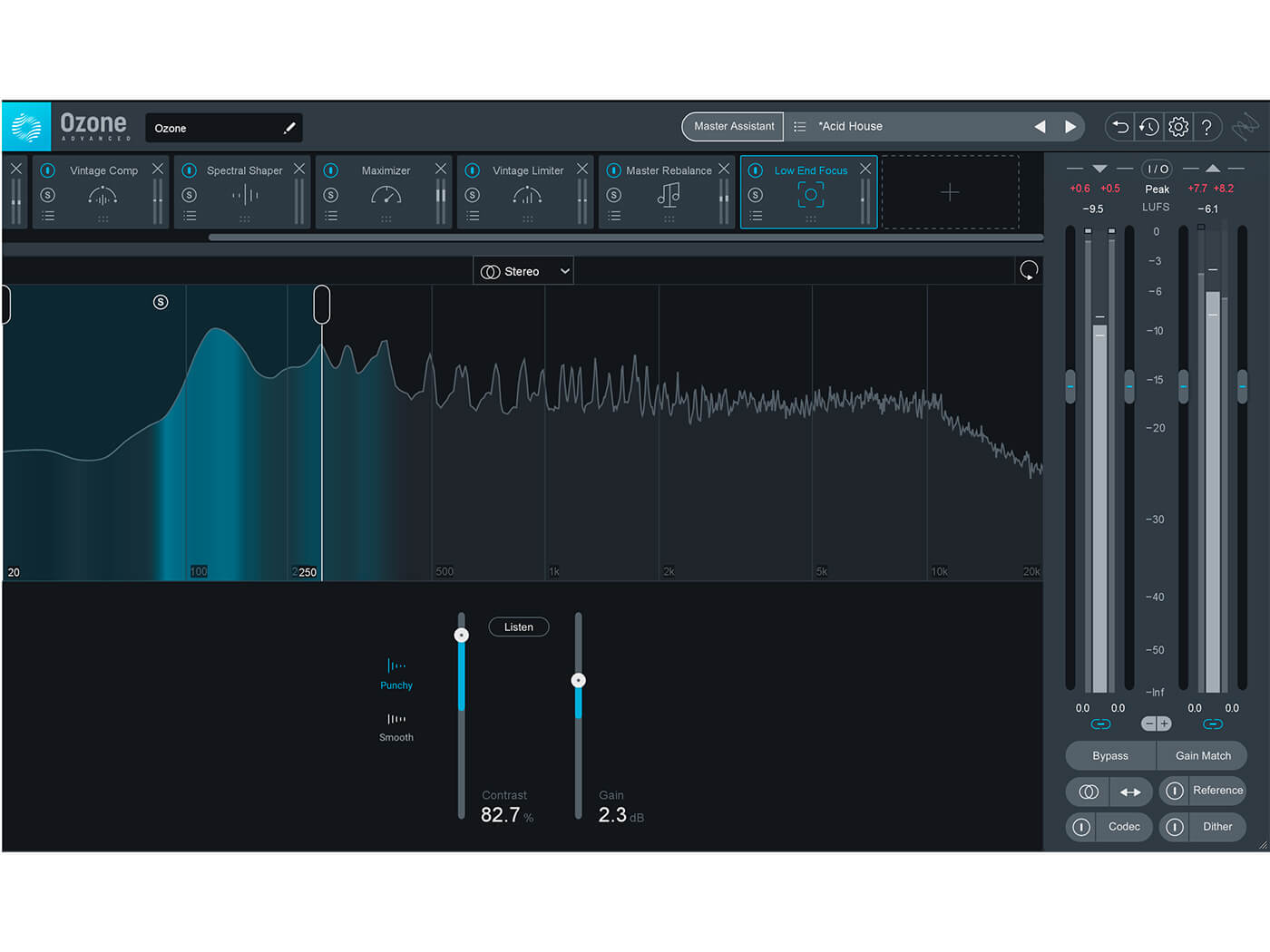 Unfortunately, it seems that there’s still no true module bypass, meaning if you temporarily switch off any modules, then they’ll still be eating up CPU. iZotope’s upgrade options are fairly complicated due to the various versions, so you’re best off checking on the website for your best price.

They do offer some decent sales across the year, so you should be able to get a good deal, or you could go for the Music Production Suite 3 for $599. Some may complain about how often new versions come out, but if you’re savvy, then you could just upgrade the suite every few years when the full round of updates has happened. Ozone was already a superb, fully featured tool for mastering duties and this new version adds some useful, cutting-edge new modules, while refining some other features and offering an improved, smoother GUI.

If you’re new to Ozone, and looking for some mastering software, then this really is the most complete, tailored package available. The Advanced version may seem expensive to some, but when you consider how many effects and tools you’re getting, including the new modules, the Vintage effects, the additional Tonal Balance plug-in and also the built-in Codec preview and referencing tools, then it’s a worthwhile package.

If you’re upgrading, then it depends on whether you think you’ll get any use out of the new features. It’s not a total game-changer, but engineers who often find themselves working with stereo tracks featuring vocals will love the Master Rebalance module, as it will save them hours of time tweaking vocal volumes. Being able to load more modules and to zoom the GUI is also a great improvement for getting more refined visual feedback. 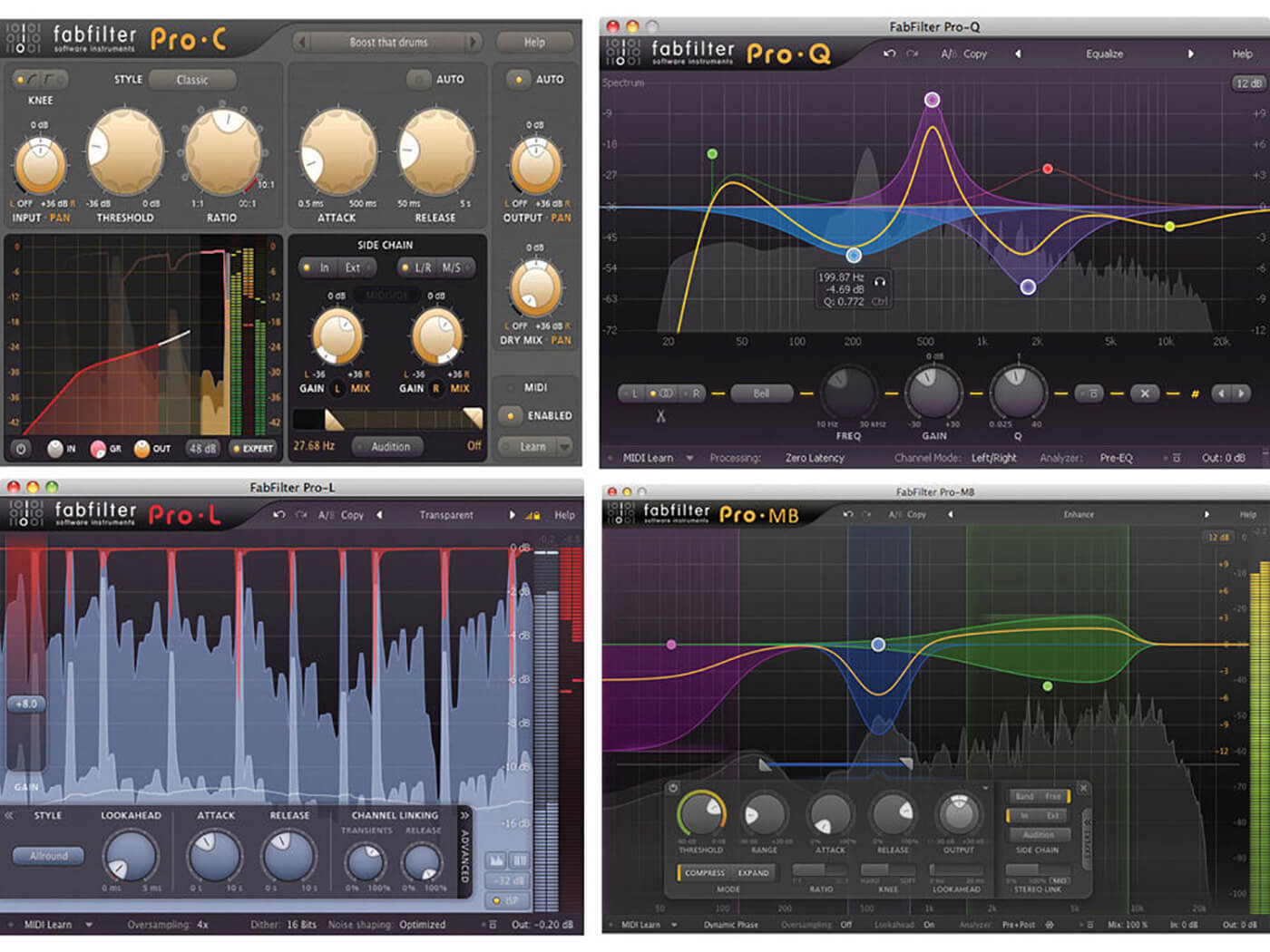 The FabFilter Master Bundle contains Pro-Q 3, Pro-C2 Pro-L2 and Pro-MB, which are all top-class effects in each category and arguably better than Ozone when it comes to deeper effect parameters and visual feedback. However, the Ozone package is much more mastering focused when it comes to workflow and comes with a whole host of extra cutting-edge features. 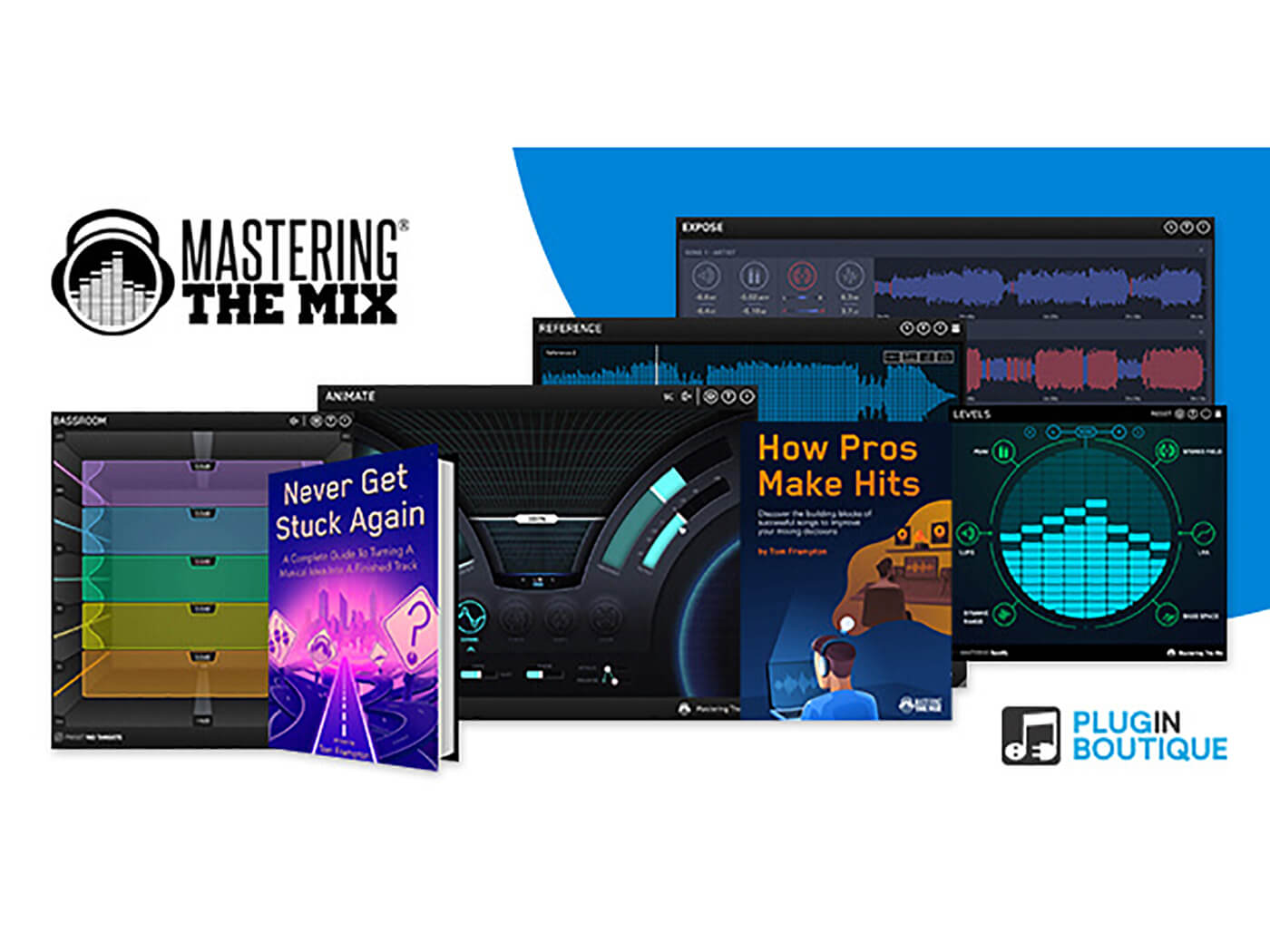 Mastering The Mix makes excellent mastering focused plug-ins to help get the most out of your mixes. The bundle includes REFERENCE, LEVELS and EXPOSE to help give extensive visual feedback on all elements, ANIMATE to add focused punch, warmth and stereo enhancement and BASSROOM to balance the low-end of the track, plus you get two production e-books.