Prominent highs prompt listeners to take note, but how does the OC16 fare in a competitive market? 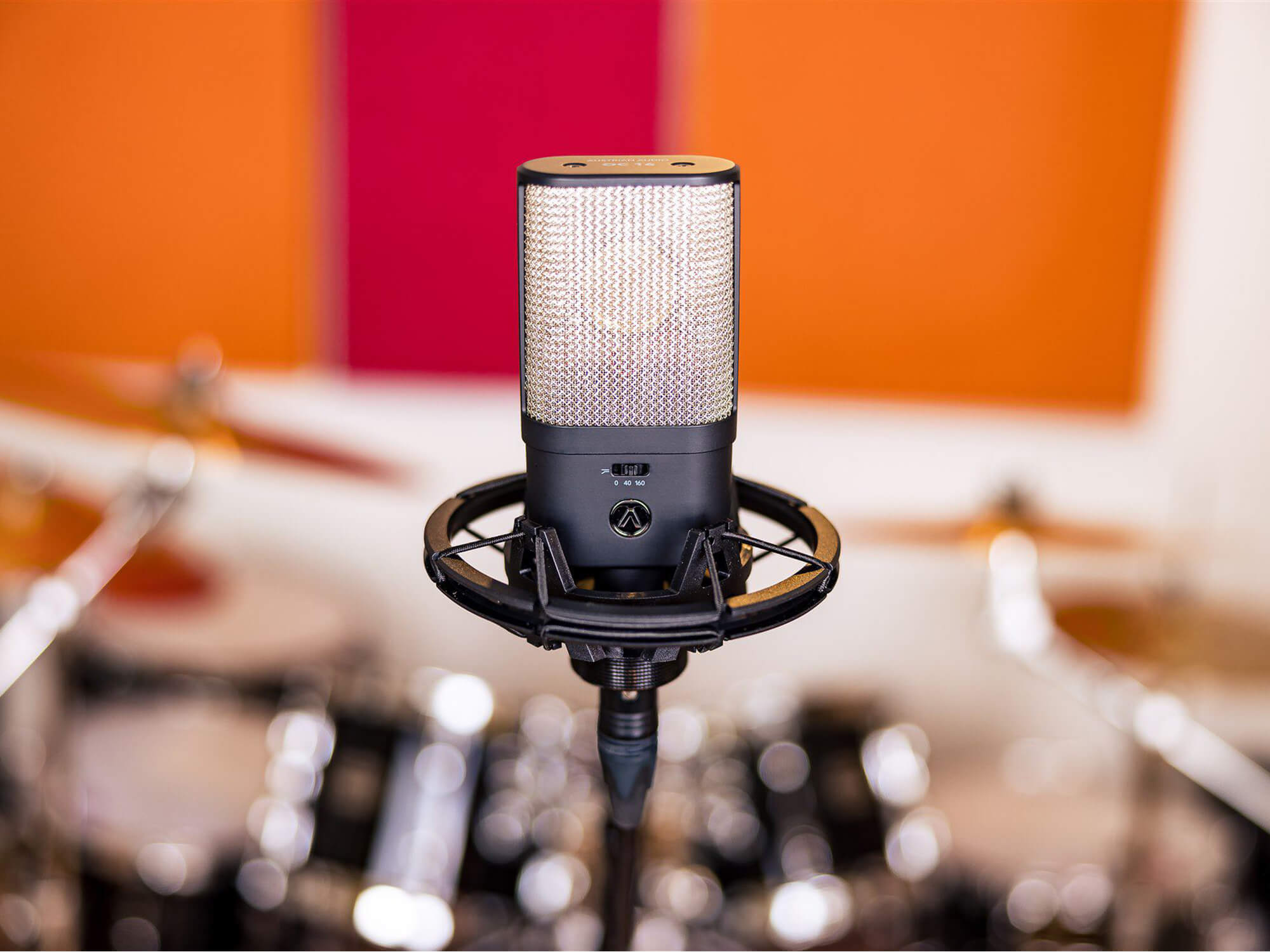 Austrian Audio has enjoyed reverence with its innovative products since the brand’s inception in 2017. Since 2021, the team – some of whom are former AKG staff – has focused on achieving a more affordable price point for some of its products, shifting assembly to China but retaining Austrian-made proprietary parts where it truly matters. Last year’s Hi-X15/X25BT headphones are a case in point, benefitting from the same high quality drivers as the more expensive models but at relatively modest cost.

In the same vein, the new OC16 condenser mic features the same CKR6 capsule as the brand’s inaugural product, the OC18, but with a reduction of features and modified case design. Also like the more expensive model, the OC16 has a fixed cardioid pattern and a switchable high-pass filter (albeit with one less frequency option), but doesn’t have a sensitivity pad to use when capturing excessively loud sounds. Features and price bring the OC16 broadly alongside AKG’s C214 and we suspect this isn’t coincidental given the inherent connection between the two competing brands. 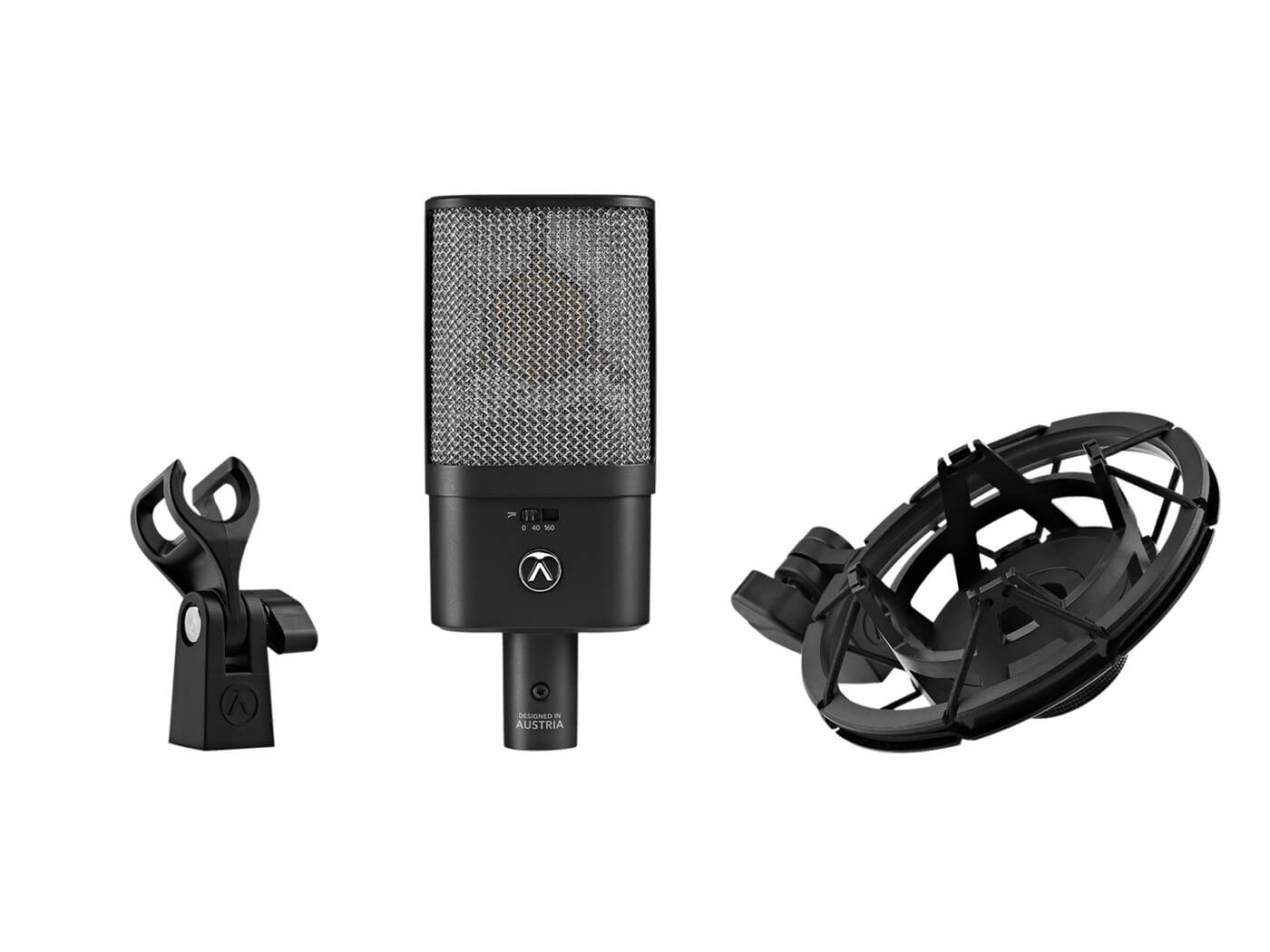 Out of the included padded case, there’s a reasonable weight to the microphone and a striking design that sets it apart. Its design is not quite what we’ve come to expect from Austrian Audio; the grille feels flimsy with a fair bit of spring that wouldn’t fare well after a few accidental knocks, while the plain silver grille finish appears utilitarian rather than stylish. Granted, many would argue that it’s what’s inside that counts, but other mics we have to hand in a similar price range – the Rode NT2a and Aston Spirit – are both more sturdy and premium in the grille department.

We have no complaints with the included shock mount, which holds the microphone very tightly. A clip is also included for mounting to a mic stand without the additional bulk of the shock mount.

Once plugged in, a simple body ‘knock’ test reveals that vibrations reaching the body yield a fairly hollow sound, but there are no obvious resonances that might cause annoyance. Just like the other Austrian Audio mics we’ve tested, the off-axis, rear-of-mic response gives a really natural frequency range, without any severe scooping or resonances. The OC16 would work admirably in applications with lots of spill like drum kit capture or live sessions – its compact profile is also an advantage in this respect. 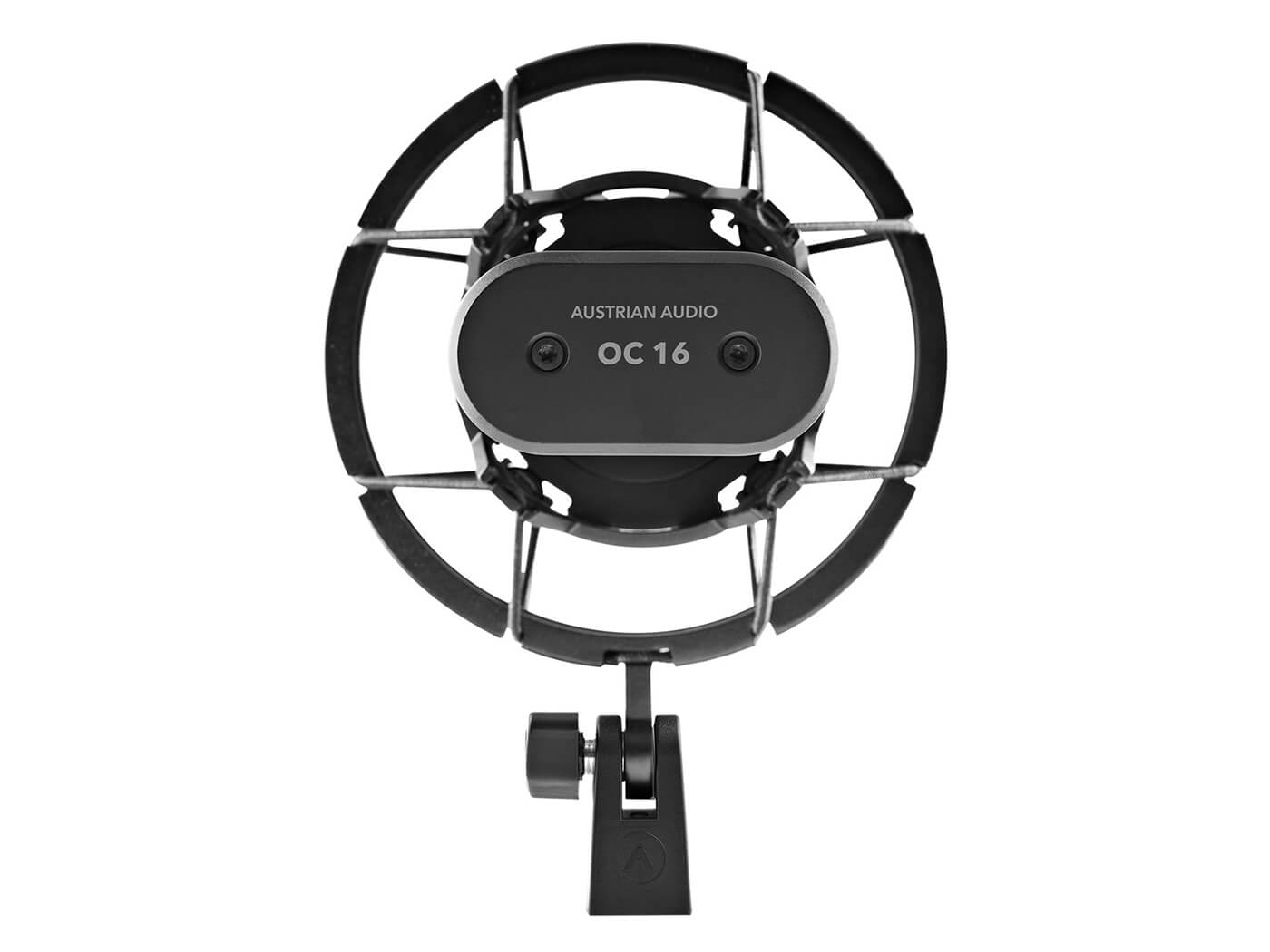 In our test, acoustic guitars come across sharply. As a consequence, they appear mid-scooped, fitting nicely into a mix without much attention to EQ, but with an unfortunate brittle edge right at the top. Our Rode NT2a in caridoid mode sounded muffled in comparison at the very top, but its mid-range was fuller and more natural than the OC16.

On vocals, there is a satisfying air of brightness to the high end on the OC16. The signal being monitored in the performer’s headphones appears closer to a final product as the boosted highs add welcome clarity to the foldback mix. Excess proximity is only noticeable very close up so, in most cases, there’s little need to engage the onboard high-pass filter when recording. Intimate sounds are more readily achievable without intrusive low-end build-up, although getting so close will certainly require a decent pop shield due to the exposed nature of the capsule. The thinner mid-range of the OC16 also makes vocal layering easier when compared to the Rode, however, the shimmering highs verge on being sibilant and leave us reaching for subtle corrective EQ. 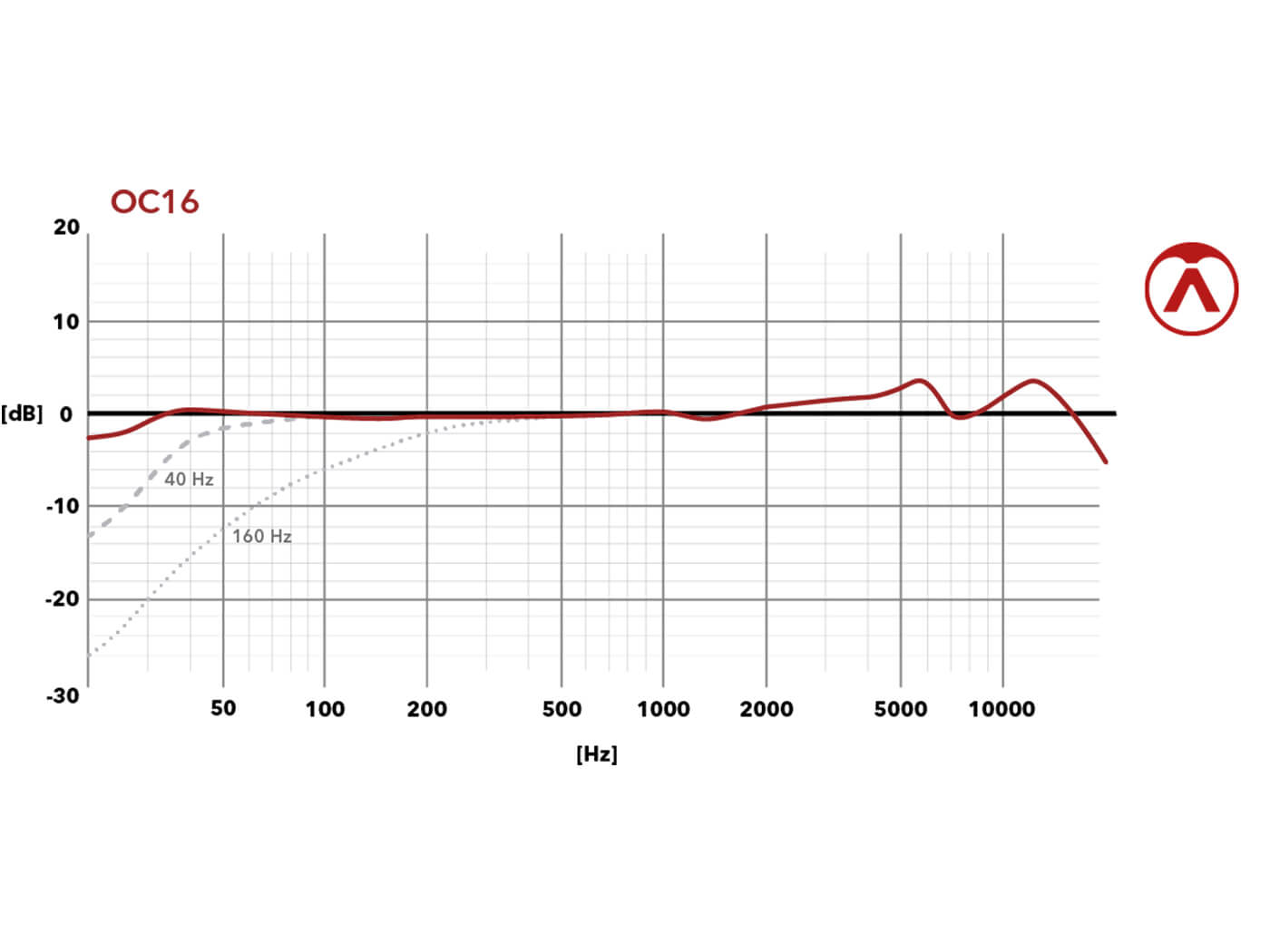 The overall voicing puts us in mind of a modern AKG C414 and the closely-related C214 – the OC16’s published frequency response bears more than a passing resemblance to the latter. It’s useful for sources that require really sharp transients – crispy snare drums, hi-hats and the like – but with more varied results in other applications. Many will love the flattering clarity of the boosted highs; others will want to smooth things out a bit with subtle EQ cuts in this range.

The OC16 is a mixed bag. It’s a harder sell than similarly priced NT2a and Spirit, especially since both of these popular mics also feature multiple polar patterns and sensitivity pad. But there’s another way of looking at this. Erstwhile fans of the OC18 that wish to add more mics with the same capsule to their collection will look past the dip in build quality and features; they’ll be very excited about this newcomer. 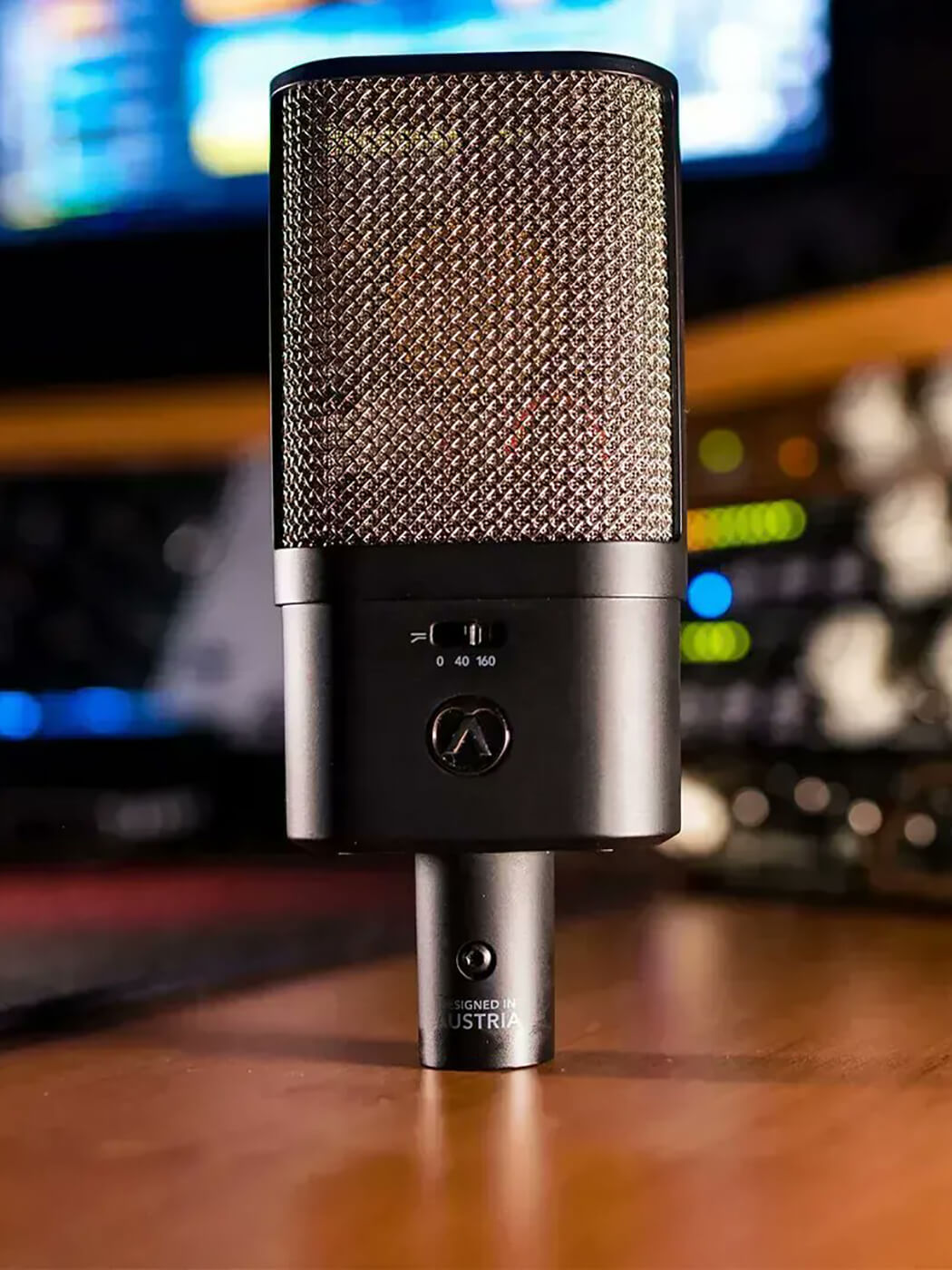