These two microphones from Austrian Audio share the same capsule and have a distinctive look. Let’s put them both to the test and see how they compare to each other, and similar mics. 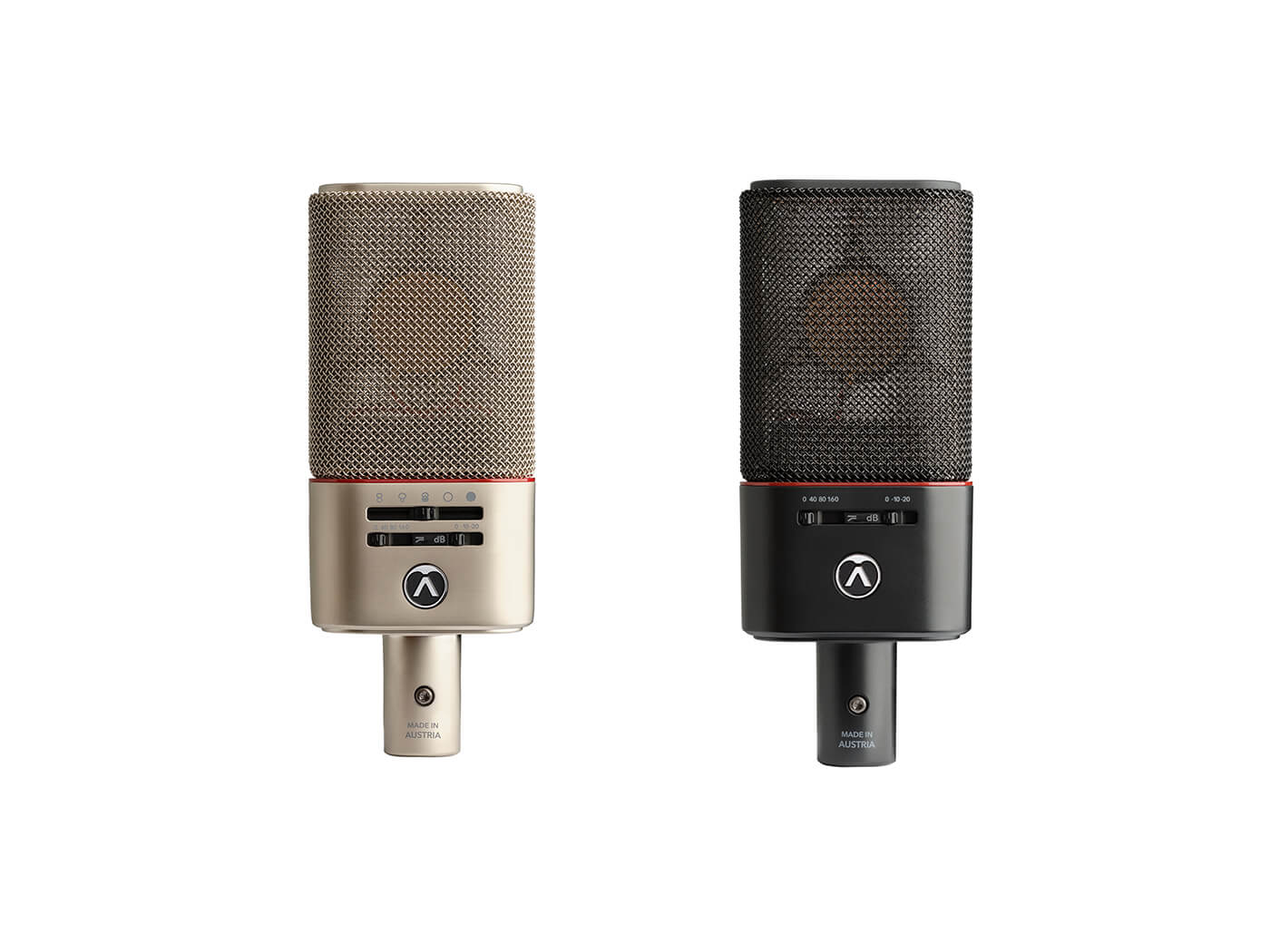 Austrian Audio‘s two new microphones – the OC18 and OC818 – share the same capsule, the newly designed CKR12. Both are large-diaphragm condenser designs with identical cases, though the OC18 is black while the OC818 is silver. The main operational difference between the two mics is the single fixed-cardioid polar pattern of the OC18 instead of the multi-pattern capability of the OC818. Each of the mics is available as a ‘studio’ version or a matched ‘live’ pair. On test here is the black OC18 studio and a pair of the live OC818s in silver.

As you might expect, the ceramic CKR12 capsule is based upon the legendary CK12 capsule found in vintage AKG C12 mics, and early versions of the AKG C414. In fact, the new CKR12 capsule was developed by AKG engineers seeking to design a capsule that faithfully recreated the magic of those coveted early ‘brass ring’ CK12s. During this process, AKG moved its microphone manufacture out of Vienna, prompting the design engineers to form a new company, Austrian Audio, to complete the design and implement it in the new mics I have before me now. 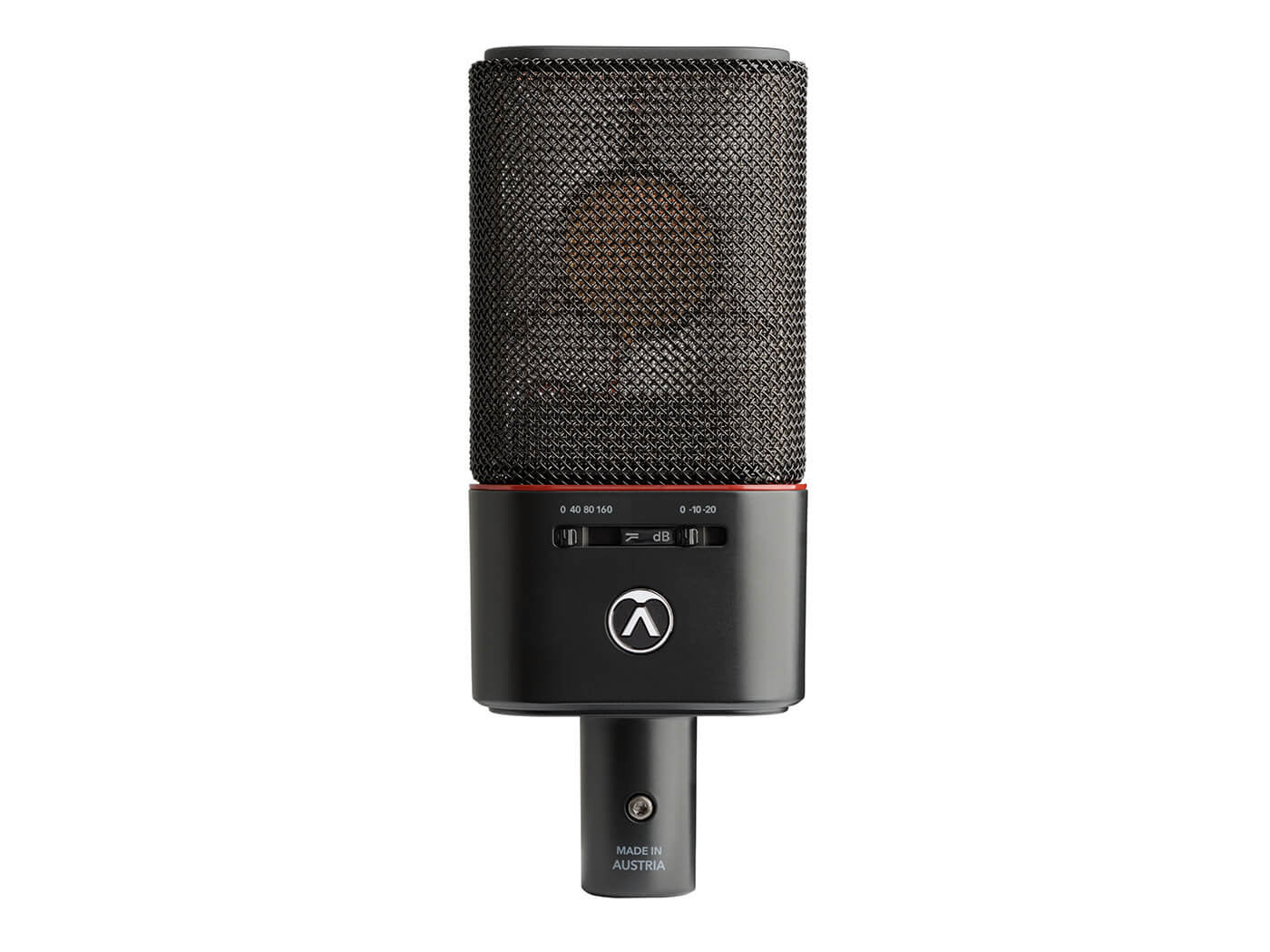 Common to both OC mics are a pad switch, offering either 10dB or 20dB of gain reduction. Selecting the -10dB option reduces the capsule’s bias voltage, allowing the mic to accept 10dB more input. A high-pass-filter is also featured on both models, offering filtering at 40Hz, 80Hz or 160Hz. The first two are high-pass 2nd order filters at their respective frequency points, while the third employs a high-pass 1st order filter from 160Hz to 80Hz and a 2nd order filter below 80Hz. Each microphone is supplied with clips and a bespoke foam windshield.

While the OC18 is a fairly straightforward design, the multi-pattern OC818 offers some interesting and innovative features. There are four switchable polar patterns – cardioid, supercardioid, figure-8 and omnidirectional – as well as a fifth Preset Mode. This requires an Austrian Audio OCR8 Bluetooth dongle (not supplied for review) to customise your own polar patterns, however both the pad and HPF are inactive in Preset Mode.

The OC818 can also be operated in Duel Mode via a mini-XLR connector (a lead is provided) on the rear side of the microphone. This outputs the signal from the back membrane, while the main XLR provides the signal from the front of the capsule. This allows for the signals from each membrane to be treated independently when recorded on separate tracks. Austrian Audio also offers its own PolarDesigner plug-in software, which enables modification of the polar pattern in post-production.

Apart from being able to precisely adjust the polar pattern to any degree between figure-8 and omnidirectional, the PolarDesigner software enables the selection of different polar patterns for up to five different frequency bands. This level of control offers a multitude of recording options and can be an effective way of dealing with unwanted spillage by selecting separate polar patterns for different frequency ranges, enabling rejection of HF spill when recording bass instruments for example.

The software also has a ‘Terminator’ control, which intelligently chooses polar patterns to reject audio it identifies as not being part of the desired source sound. Equalisation filters are also available via the PolarDesigner, so there are plenty of options to customise the performance of the microphone; all user presets can be stored for future recall and even shared with other users. 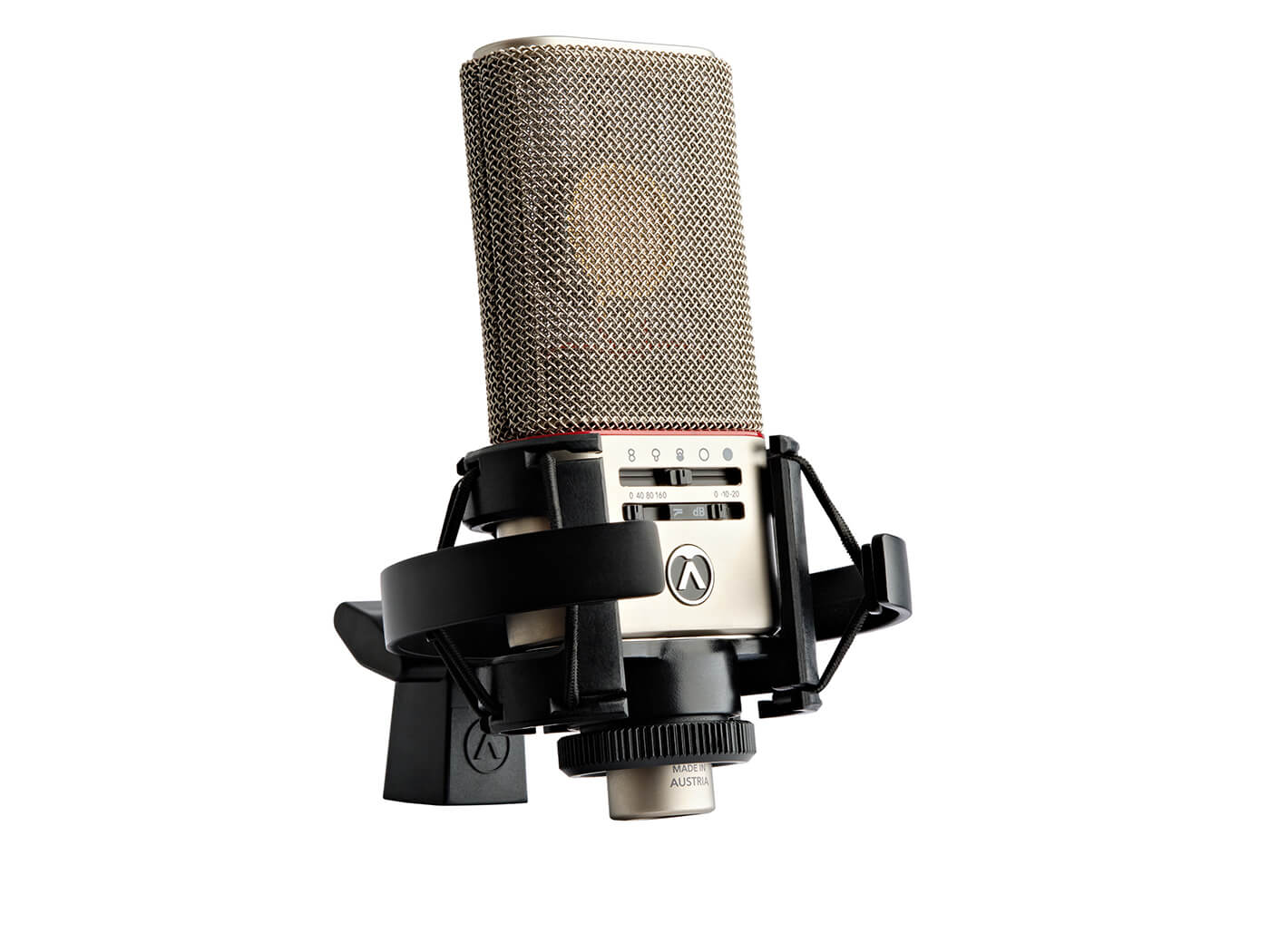 For the first audio tests, both OC microphones were set-up alongside one of our AKG C414s. Unfortunately, we don’t have a brass-ring capsule version from the early 1970s, however we do have a couple of excellent examples from the 1980s, namely the AKG C414 B ULS. Recording some acoustic guitar for comparison of tone brings about some unexpected results. With all the microphones in cardioid mode, it is noticeable that the OC18 is not only brighter than the C414, but also slightly brighter than the OC818. This presents a bit of a problem to me as a reviewer because Austrian Audio suggests that any OC18 could be used with any OC818 and, as long as the multi-pattern mic is set for cardioid operation, they will perform as a matched pair.

To quote from the company’s own literature, “Since the OC18 and OC818 are sonically identical your choice is based only on application.” While the two Austrian Audio models display marginally different tonal characteristics, I don’t feel there was anything wrong with the OC18; it simply sounds a little brighter.

With the pair of OC818s there are no such discrepancies; both mics sound identical and perfectly matched. The pair also more closely resembled the tonal balance of the C414, albeit without the slight woody character in the C414’s midrange.

The broad midrange of the OC818 was incredibly even and open with no audible honks or unwanted resonances, while the upper frequencies presented cleanly and sweetly. At the extreme top-end, a sense of air and space highlighted the mic’s HF extension without the slightly glossy treble that characterises the C414 B ULS. Recording bass guitar as an overdub, I used the mic’s figure-8 polar pattern to capture some room tone and was impressed with the mic’s tight, punchy lower registers. In this respect it easily outperformed our C414, which I tend to avoid for bass recording and was stiff competition for my preferred large diaphragm condenser for bass work, the Neumann U47 FET.

Moving on to the fixed-cardioid OC18, the added presence in the upper midrange brings out the crunch in electric rhythm guitar and sounds gorgeous on cello. The firm bottom-end displayed by the OC818 is notable here too, while the midrange brightness allows the sound of the bow across strings to cut through the mix.

Although I was expecting the two Austrian Audio models to sound identical, the brighter nature of the OC18 was not unpleasant. On the contrary, with instruments and vocals requiring a boost in the presence region, its slight honeyed glaze was quite beguiling.
It’s not so unusual for different examples of the same piece of equipment – microphones or otherwise – to display slightly contrasting characters. Many engineers have, say, a favourite SM57 from a collection of six or insist that their ‘D revision’ 1176 sounds better than later models.

The pair matching of the OC818s was absolutely faultless however, so be sure to order a matched pair rather than take a chance that an OC18 will sound identical to an OC818 in cardioid mode.

These days there are many extremely capable microphones available at prices way below long-standing classics from the likes of Neumann and AKG. However, it’s rare to see (and hear) microphones of this quality and beauty at such attractive prices. I recommend either of these microphones to anyone looking to buy a world-class large diaphragm condenser microphone without breaking the bank. They are true giant-killers.

I am on record as saying if I could only use one model of microphone to record everything, it would be the AKG C414. These new microphones from Austrian Audio may not be exact copies of the classic AKG, but they are similarly capable all-round microphones. The OC818 in particular hits the mark as it offers four basic polar patterns and, with the aid of software, the option to tailor the polar pattern to your exact requirements. 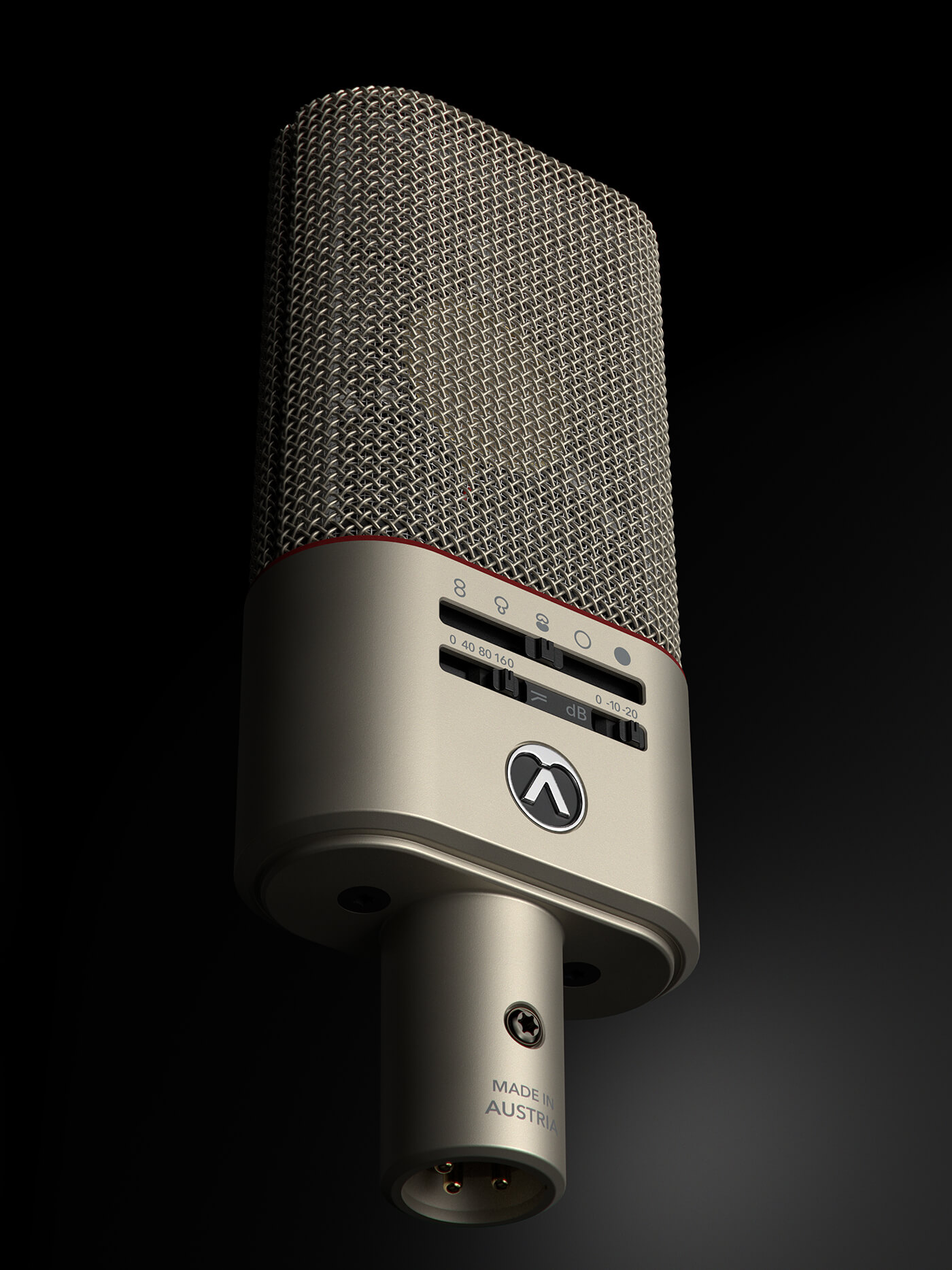 Pad switches and high-pass-filters are always a welcome feature on microphones of this nature and though most preamps/consoles have these features, dealing with problems caused by excessive volume levels or unwanted low-end noise are best sorted at the earliest possible stage. Every studio or home recordist should possess at least one high-quality large diaphragm condenser microphone, however, having a matched pair is crucial if any critical stereo recording is to be performed. 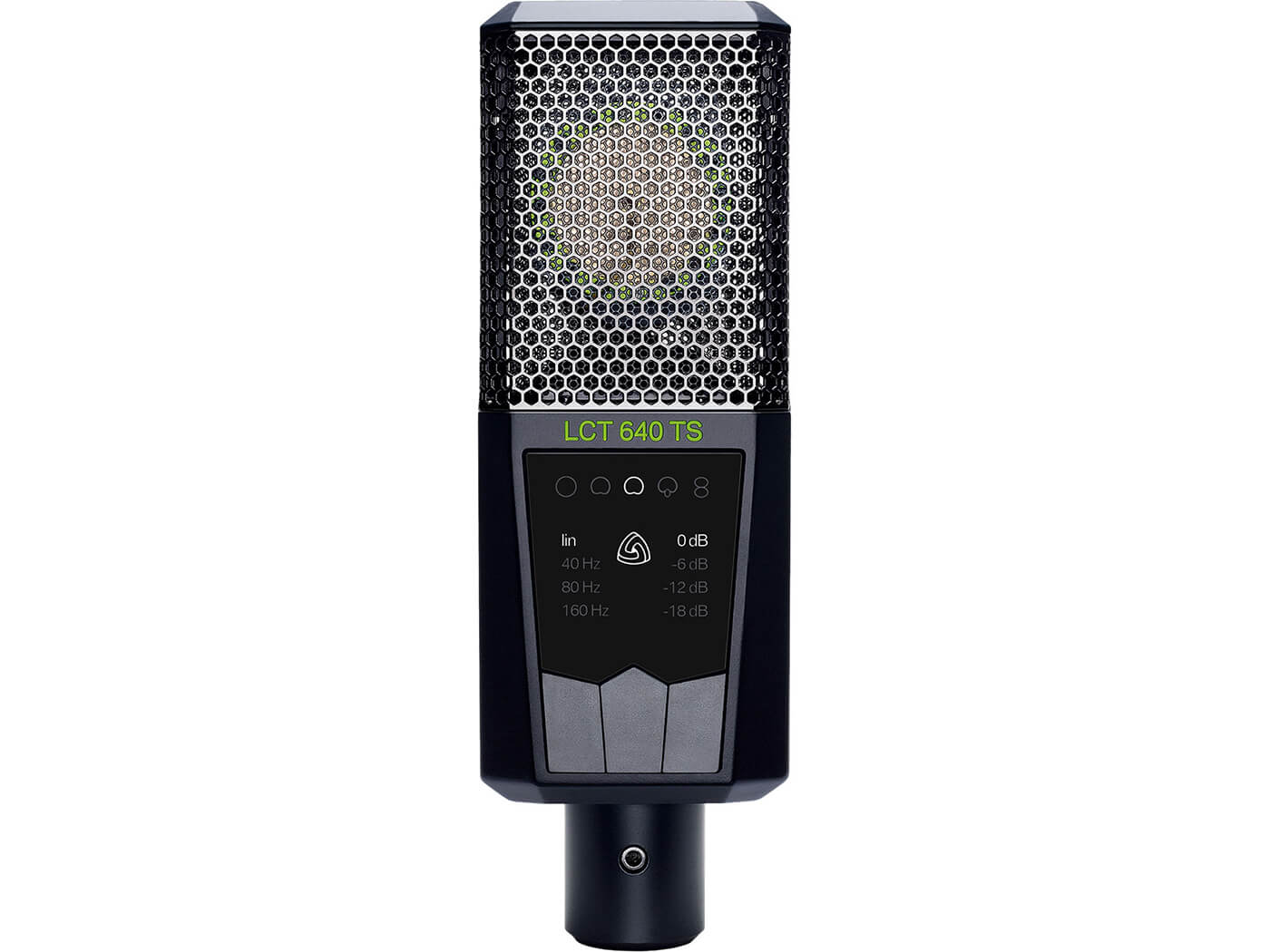 Like the OC818, the 640 TS offers multiple polar patterns and a dual-output mode to record the front and rear diaphragms to separate channels. There is also software available to allow polar patterns to be changed in post-production. 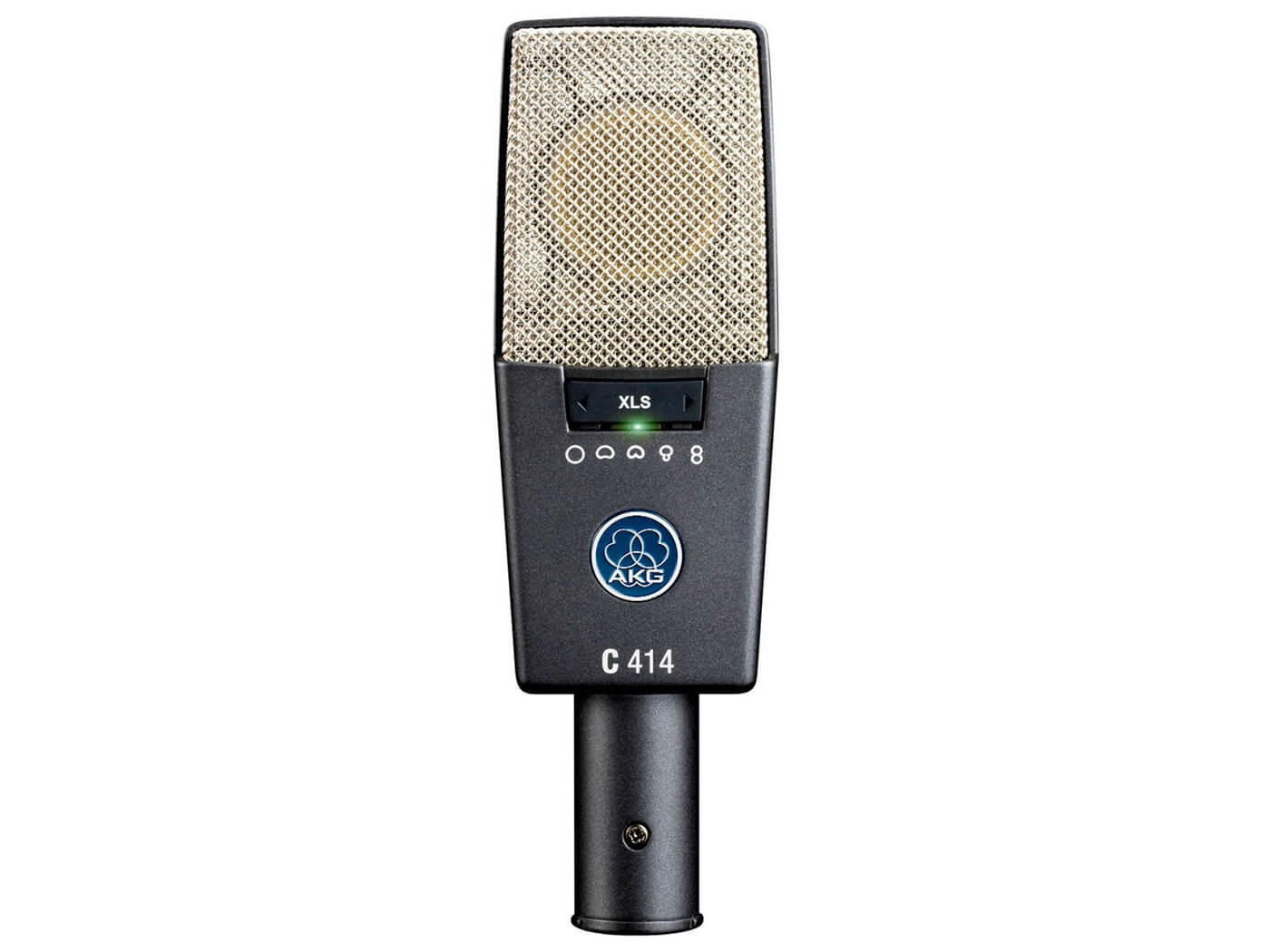 Originally launched in 1971, the current C414 XLS maintains the sonic character of the classic C414 B ULS while offering nine polar patterns and three attenuation (pad) levels. It also has a peak hold LED that displays even the shortest overload peaks.