Audient EVO 16 review: Pro-grade I/O for beginners and beyond

If you enjoy making music but find the engineering side of things a chore, this addition to Audient’s EVO range could be for you. 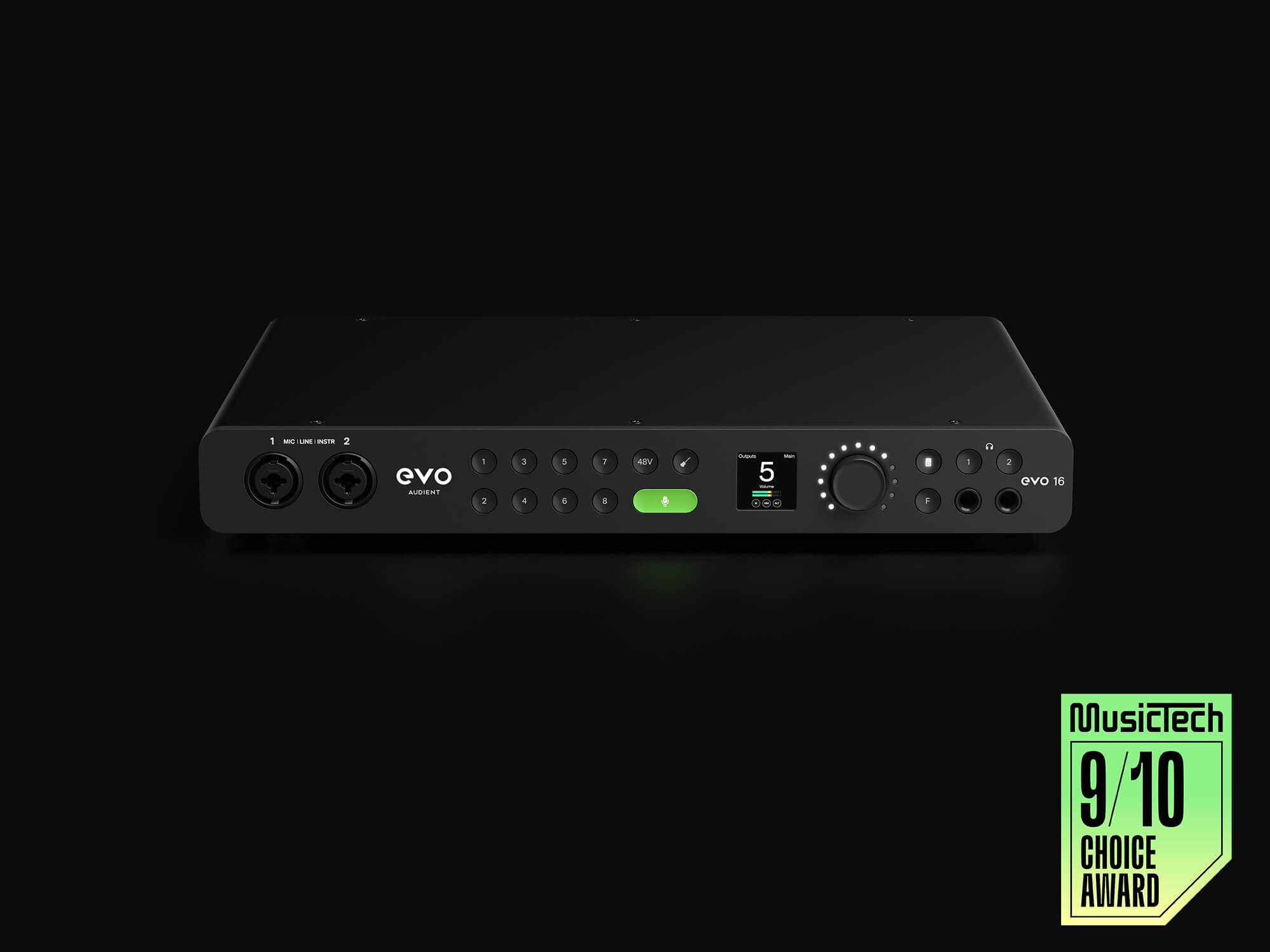 ⊖ If rack mounting, do you hard-wire mic or line inputs?

When all you want is to record your band’s latest jam, lay down a beat or capture the chord sequence you just dreamed up before you forget it, the last thing you need is to get bogged down with preamps and gain levels. It was with this in mind that, in 2020, British pro-audio manufacturer Audient launched their easy-to-use EVO range.

The inaugural two-in two-out EVO 4 was soon joined by the EVO 8, which doubled the I/O channels. Now, Audient has unveiled the all-new EVO 16. 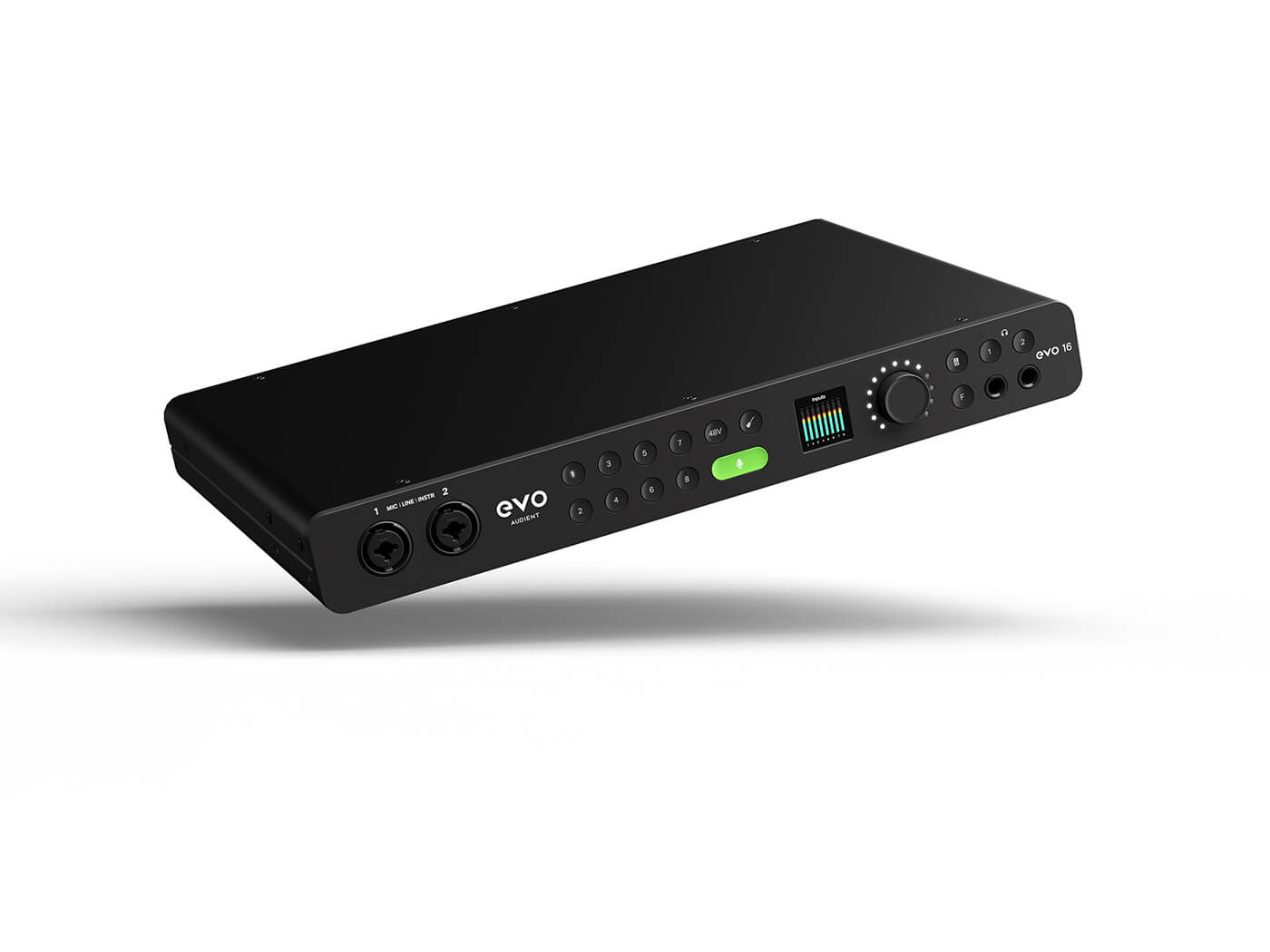 Where the original EVOs had something of a boxy – albeit sturdy and nicely finished – look, the new EVO 16 is much sleeker and more serious-looking. Although slightly narrower than a standard rack unit and fitted with grippy rubber feet to keep it in place on tabletops, the interface demands a fair amount of desk space. Thankfully, then, a free rack-mount kit can be ordered once you register the unit with Audient – the only reason the kit isn’t shipped with the interface is to reduce waste, as not everyone will use it.

The interface’s controls are laid out on the front panel, and include input and monitor/headphone selector buttons, a data-entry wheel, and a small colour LCD screen. This display boasts astonishing resolution and clarity: labels and text look like they’ve been printed physically onto the facia, and the levels look like traditional LED- or plasma-based meters sat behind a clear plastic panel. 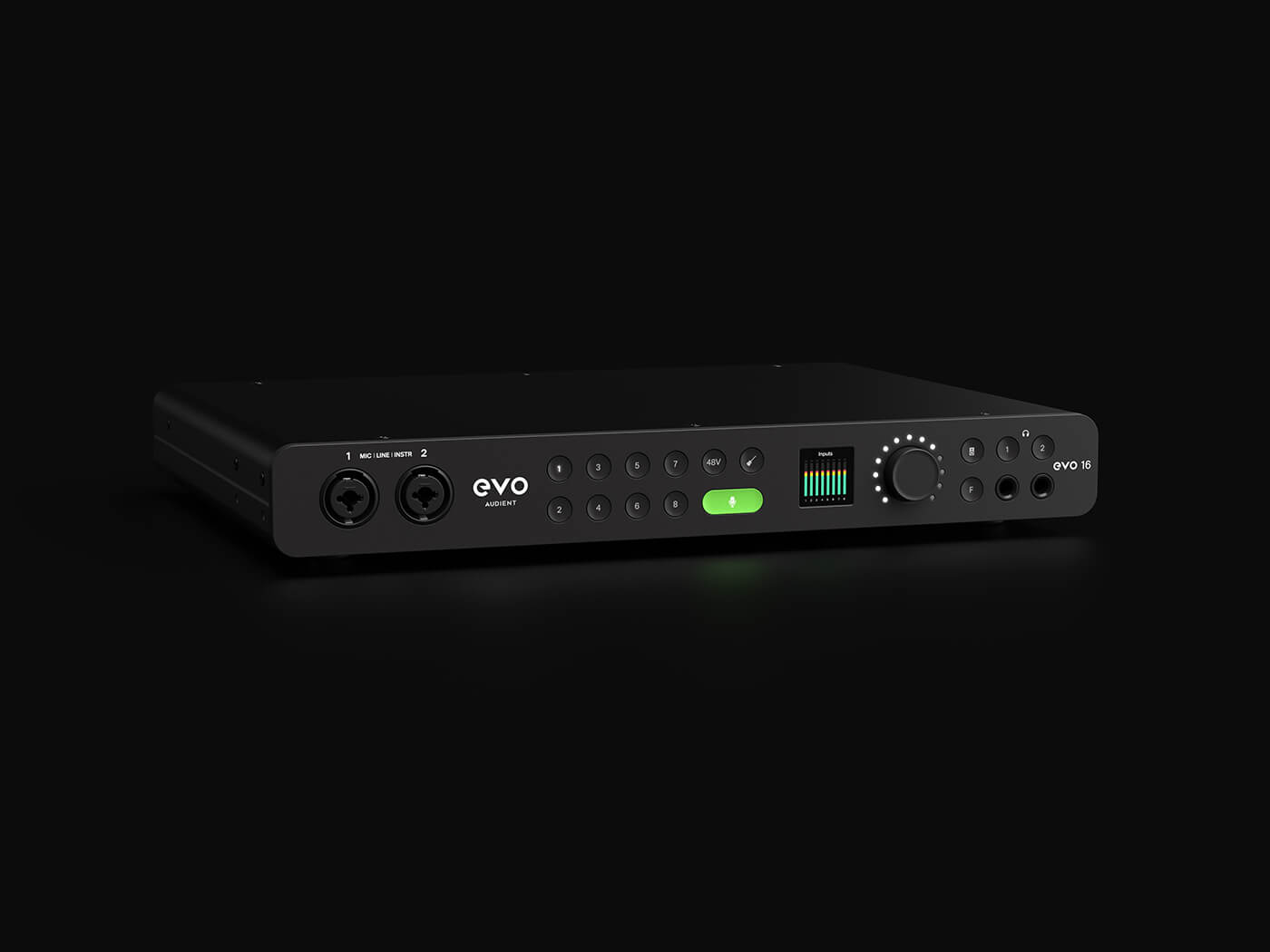 The EVO 16 offers eight analogue inputs and eight analogue outputs. The inputs are all via XLR/jack combo sockets, with the first two channels, located on the front panel, able to take mic, line and instrument level signals, and the rear-mounted connectors being just mic/line. All the mic inputs have individually switchable phantom power, and display an amusing image of a ghost on the LCD screen when enabled and disabled.

The eight analogue outputs, also on the rear panel, are carried via standard 6.35mm three-pin balanced jack sockets. An additional pair of independent headphone outputs are located around on the front panel.

The sound quality is on a par with the other EVO interfaces, with the same clean, low-distortion preamps and accurate reproduction. The preamps capture good detail and presence in the low and mid range, though could perhaps do with a smidgen more definition at the top. 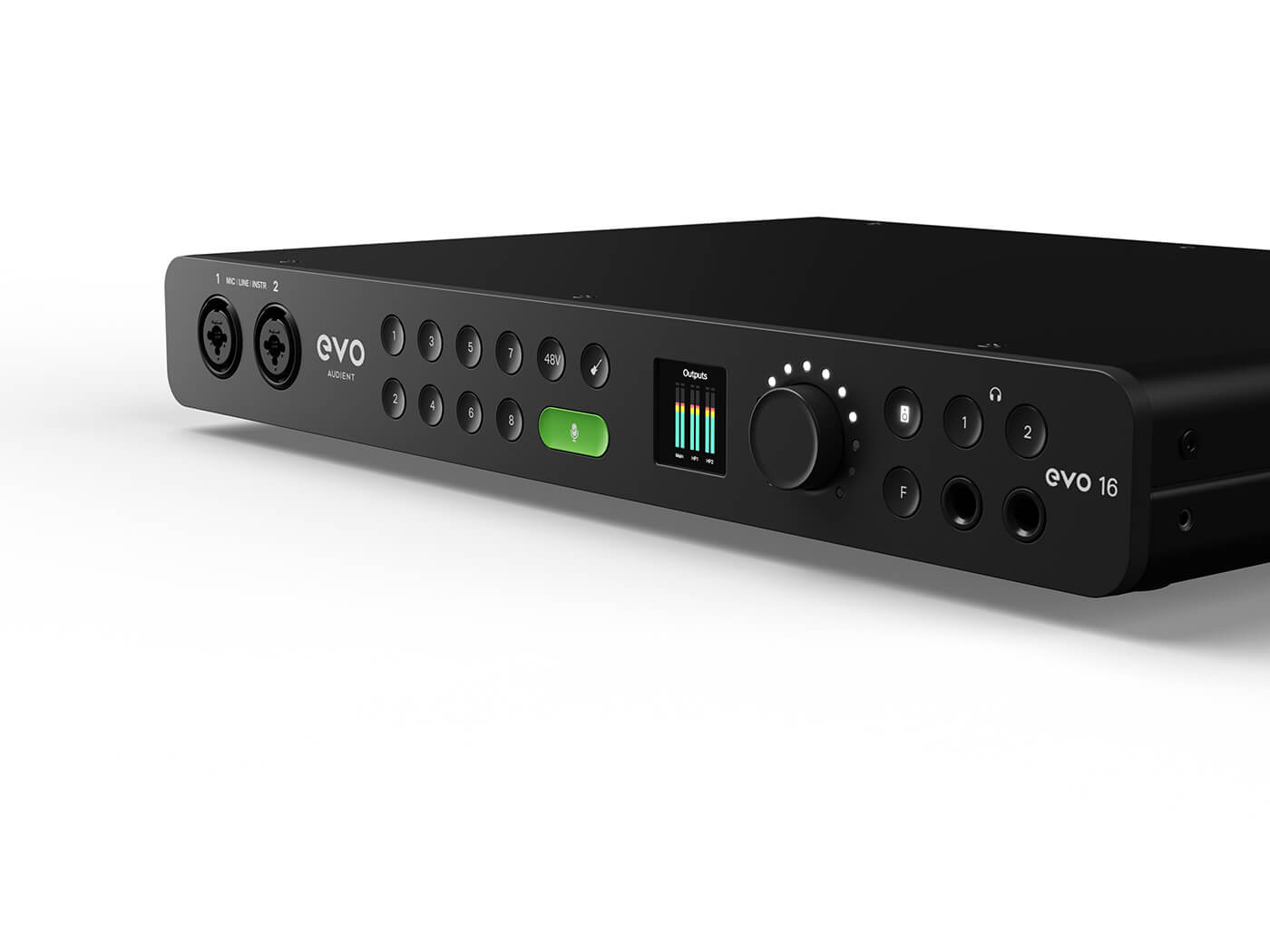 In keeping with the EVO’s easy-to-use ethos, the XLR portion of the input sockets can only take mic level signals, and the jack portion can only take line (or instrument for channels 1 and 2) signals. This makes sense but may be a consideration should you intend to install EVO 16 in a rack, where it is customary to hard-wire rear-facing connectors to an external patch panel. That is, do you hard-wire to the mic inputs or to the line inputs? It’s not an insurmountable issue but it may involve additional expenditure on DI boxes.

Another solution might be to utilise the EVO 16’s digital I/O. The unit features two pairs of optical connectors that let it handle up to an additional 16 channels of I/O, albeit via suitable preamps and/or converters. Each optical connector can be switched between ADAT or SPDIF formats, and so the actual number of digital ins and outs varies depending on how the interface is configured. Nevertheless, including the analogue I/O, maxing out at 24 channels of I/O at up to 48kHz and 16 channels at up to 96kHz is impressive for any audio interface, let alone one this affordable. 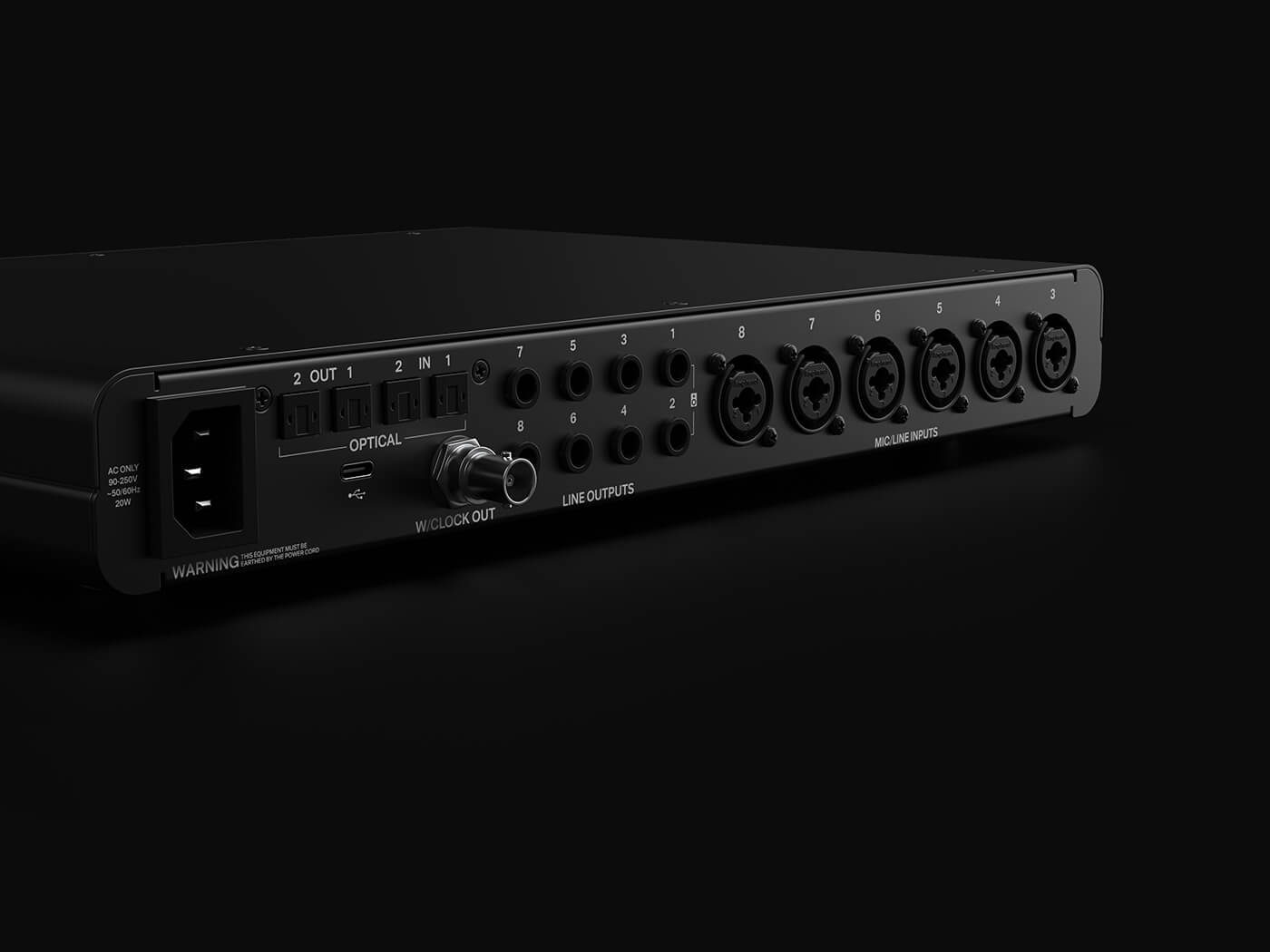 The core of the EVO range’s ease of use is Smartgain, a system that analyses the incoming signal and sets the ideal input gain for it. With the EVO 16, Smartgain can set the gain for all eight analogue inputs simultaneously, a massive time-saver especially if you’re a self-recording band or drummer. Just get connected, activate Smartgain, play for 20 seconds and you’re ready to record.

The EVO 16’s high-res display makes it possible to do a lot of configuration without looking at your monitor, though there is of course a computer-based mixer and control panel too. Here you can mix all input signals with 10 internal channels that bus in audio from your DAW. Alongside a Master mix, you can create four further Cue mixes, then route each of these to a different pair of physical outputs. Alternatively, you can map the internal DAW channels directly to the physical outputs, or create a hybrid of the two methods.

The mixer settings can be stored in the hardware as a standalone setup. You can then use the EVO 16 as a multi-channel preamp, router and rudimentary mixer without connecting it to a computer, which is ideal for location filming work. 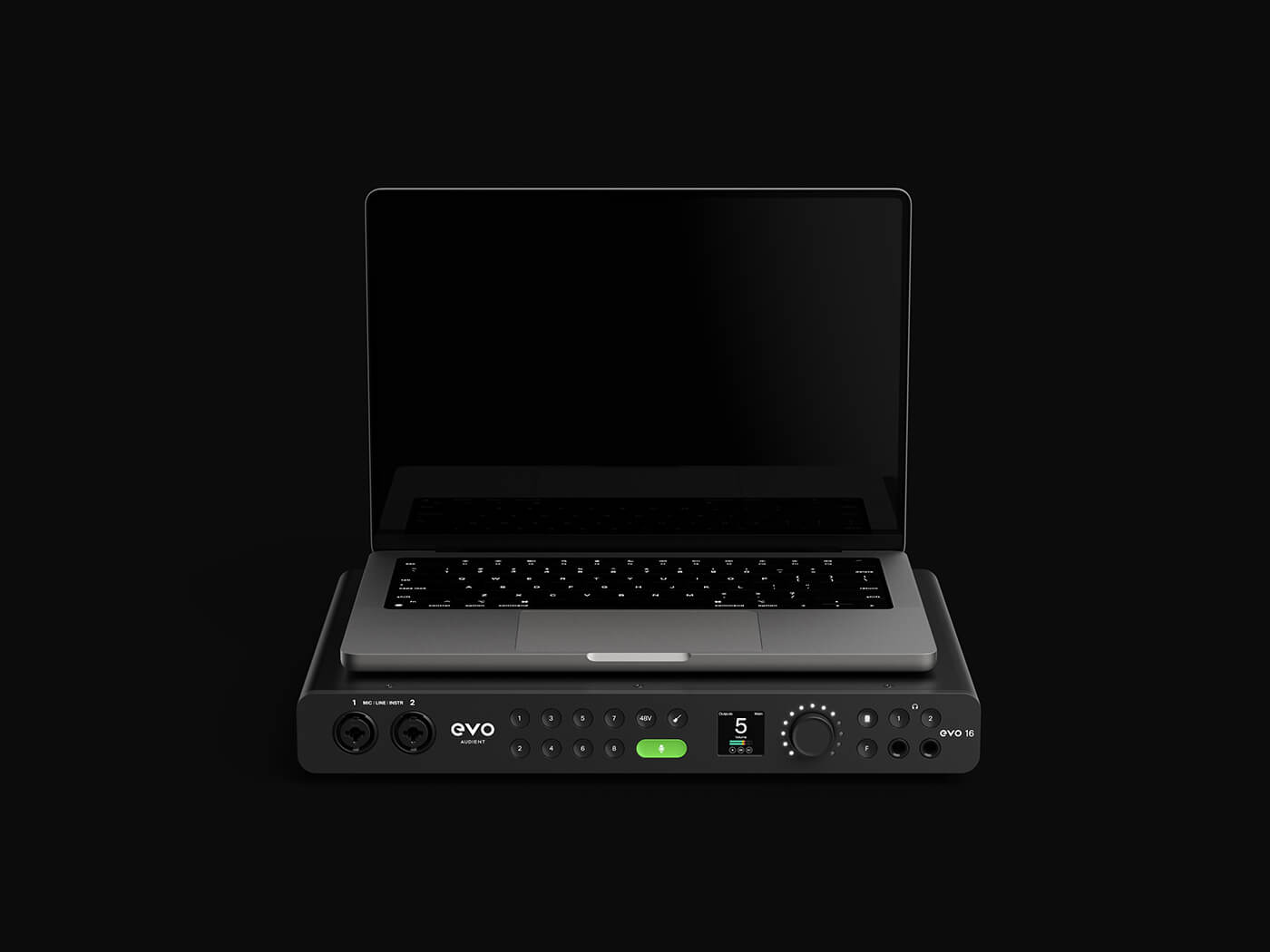 The EVO 16’s built-in audio loopback functionality allows you to direct any of the input channels, DAW busses or mixes back to a special loopback input bus that can be used by other applications. This will prove useful for vloggers and livestreamers, many of whom use OBS Studio for multiplexing and broadcasting. However, due to limitations in Core Audio, OBS for macOS can only access the first two inputs of any multi-channel audio interface, and so cannot access the EVO 16’s loopback channels. Despite this not being a fault of the EVO 16, nor an issue unique to it, Audient is nevertheless hoping to include a solution in a future firmware update.

If you’re using Windows, OBS will be able to access all of the EVO 16’s channels, including the loopback channels.

Working with the EVO 16 is a pleasure. It is intuitive and easy to use, with pro features such as advanced routing, alternate monitor switching, monitor dimming and talkback, all of which are usually reserved for higher-end hardware. The overall impression, then, is of an audio interface that is bringing an awful lot more to the table than you’re paying for, and that allows you to concentrate on making music without being distracted by the technicalities. 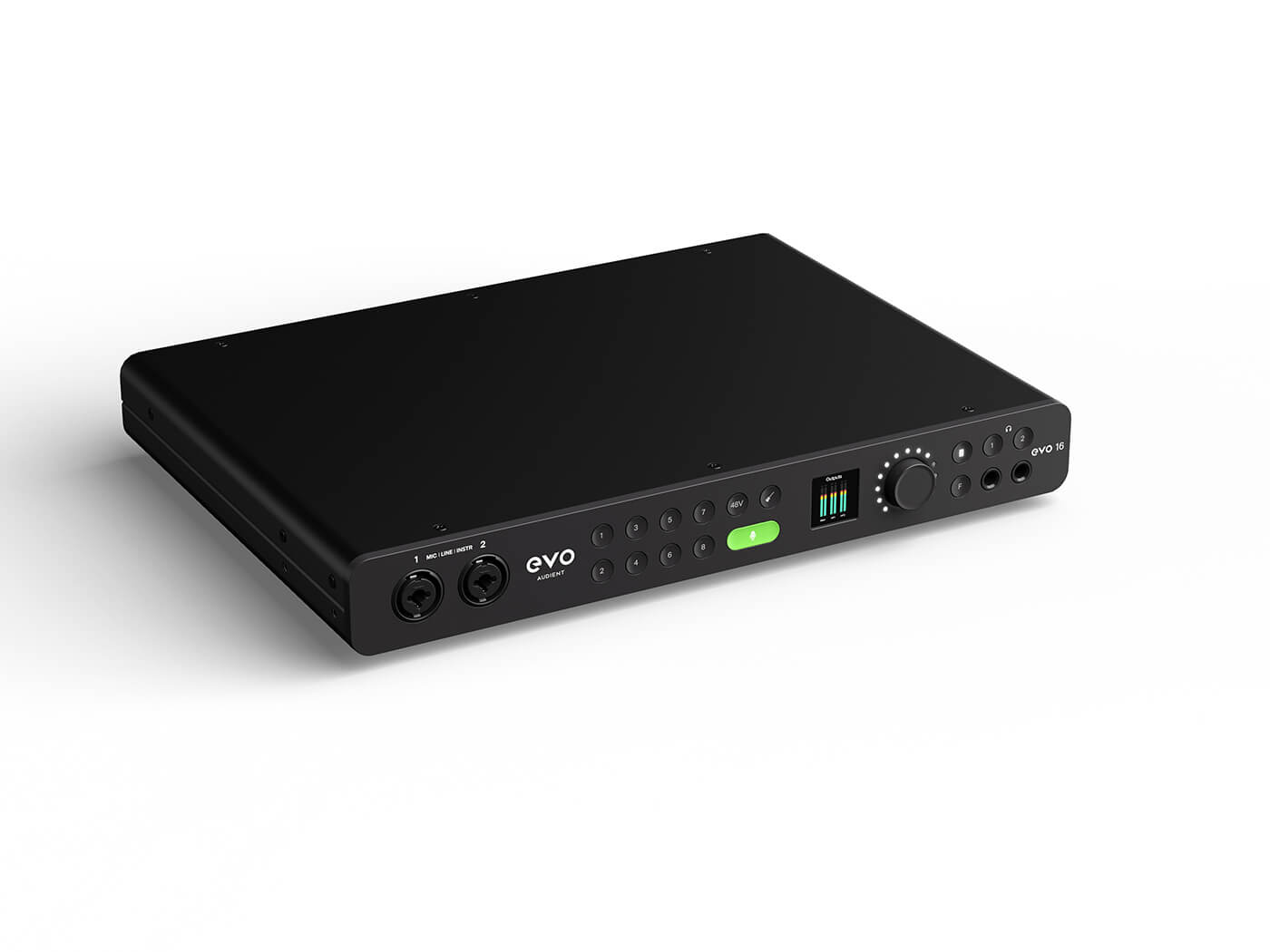