Audient switches gears with a new sub-brand and this small and compact interface that prioritises simplicity but boasts professional value. 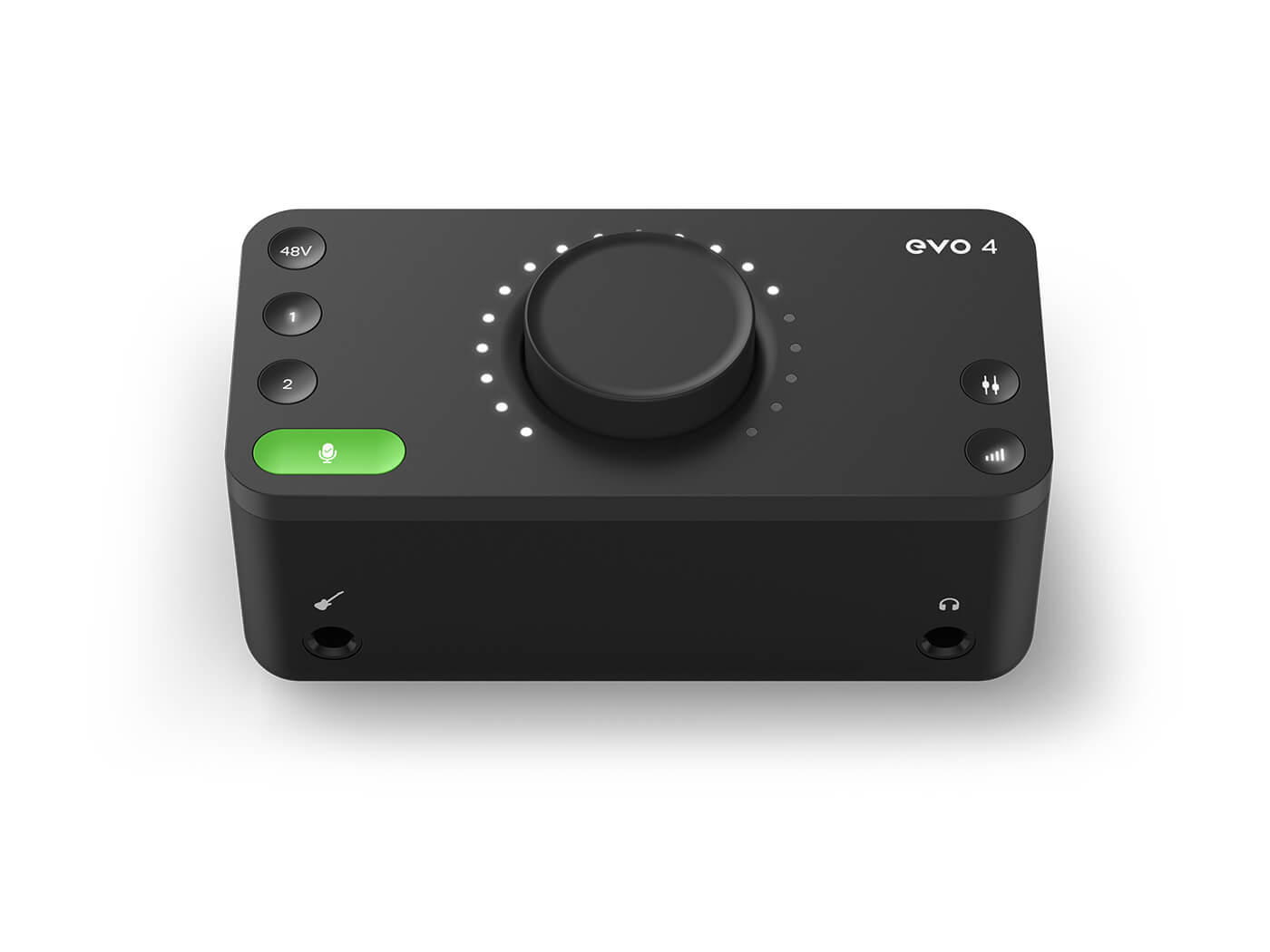 For those who work with recording equipment every day, it can be easy to forget just how overwhelming even the simplest studio rig can appear to the uninitiated. Even something as simple as recording a mic signal while returning a monitoring signal to the performer, which is second nature to seasoned engineers, can be fraught with challenges for newcomers. There’s input gain to be set, internal signals to be bussed, not to mention the whys and wherefores of input monitoring – and all this comes before you’ve even started to record your ideas. Let’s face it, if all you’re interested in is creating music, this preamble can be something of a chore, no matter how clued-up you are.

Many hardware manufacturers have tried to address this situation by creating audio interfaces that mask the technicalities of the recording process so that the user can focus on the creative process instead. In recent years, UK studio-equipment manufacturer Audient has come out with a series of products that are simple to use but do not compromise on the company’s well-deserved reputation for outstanding audio quality and attention to detail. The latest in this line, housed under the sub-brand EVO by Audient, are the EVO 4 and EVO 8 audio interfaces, which offer two-in/two-out and four-in/four-out configurations, respectively. Here, we’re taking a look at the former. 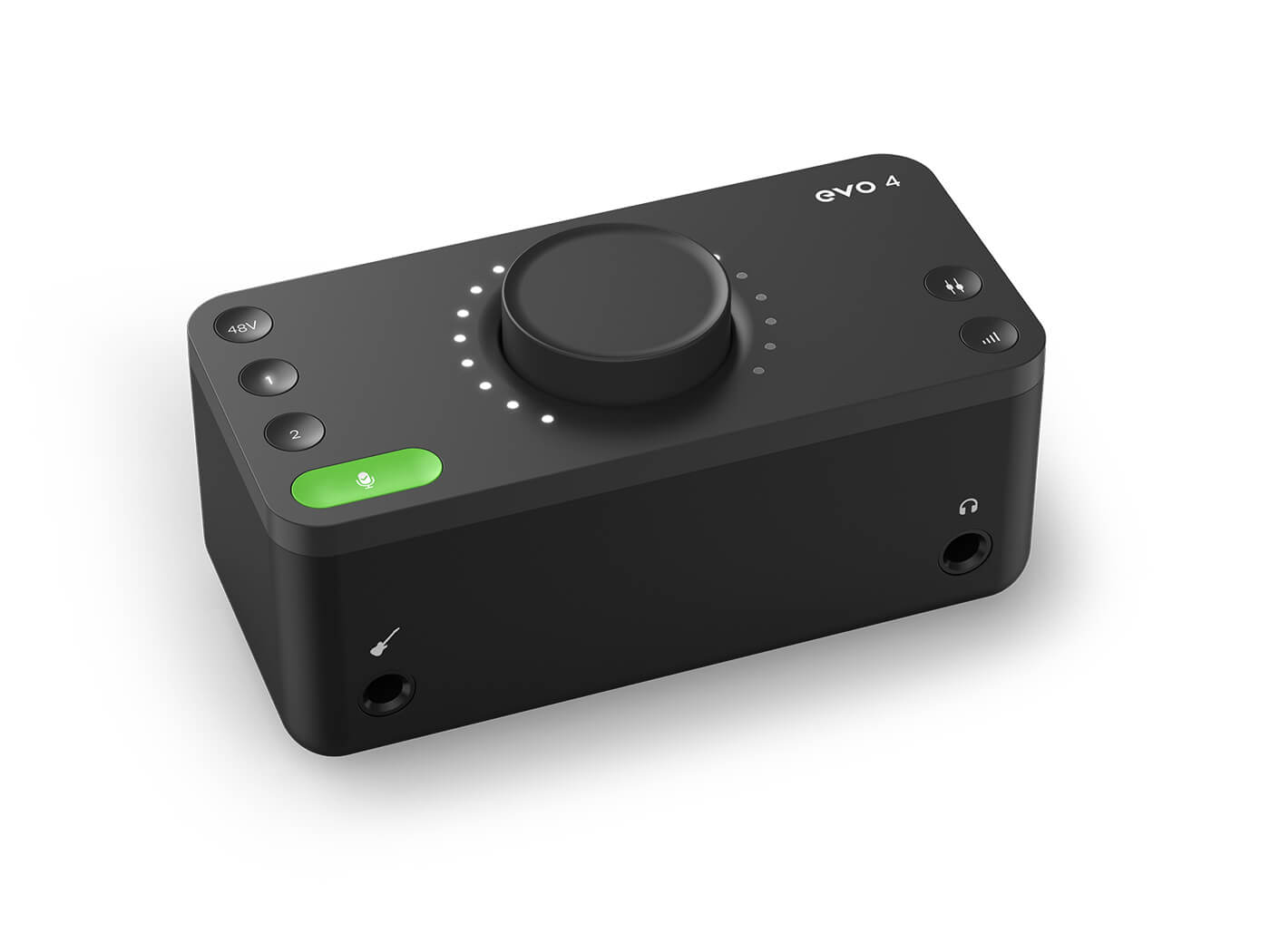 While not the smallest I/O box I’ve ever come across, the EVO 4 is compact and has a no-nonsense layout. The top panel is dominated by a rotary encoder whose primary purpose is, unsurprisingly, to control the monitor output level, but it’s also used for other level-setting duties. Surrounding the encoder is a ring of white LEDs that indicate either the current value of the encoder as you’re interacting with it or the current input/output signal level – depending on what mode the unit is in – when you’re not.

The main output jacks are on the back of the unit, alongside a pair of mic/line inputs served by hybrid XML/jack sockets. These offer up to 58dB of gain range, can be configured to operate as a stereo pair or as independent mono inputs, and have individually switchable phantom power. The EVO 4’s converters work at sample rates of up to 96kHz, whereas many of its competitors support up to 192kHz.

The rear panel hosts the USB-C socket used for connecting the EVO 4 to a Mac or Windows computer, or to an iOS device. The EVO 4 can be connected directly to an iPad Pro’s USB-C socket and run off the power of the Apple product. However, if using the EVO 4 with any other iOS device, you will need an Apple Camera Connection Kit to convert the device’s Lightning port to USB-A, which in turn will need to connect to a powered USB hub.

The front of the unit sports only an instrument-level input, for directly connecting a guitar or bass to input channel one (this overrides the rear mic/line input one), along with a standard 1/4” headphone-output jack driven by a surprisingly powerful headphone amp. Connecting headphones mutes the main line outputs. This will be useful in some circumstances but may prove a nuisance in others – a dedicated output mute button would have been preferable.

The unit is finished in a soft-touch polycarbonate and is reasonably weighty, which, coupled with its rubber feet, help prevent the unit from sliding around when in use. 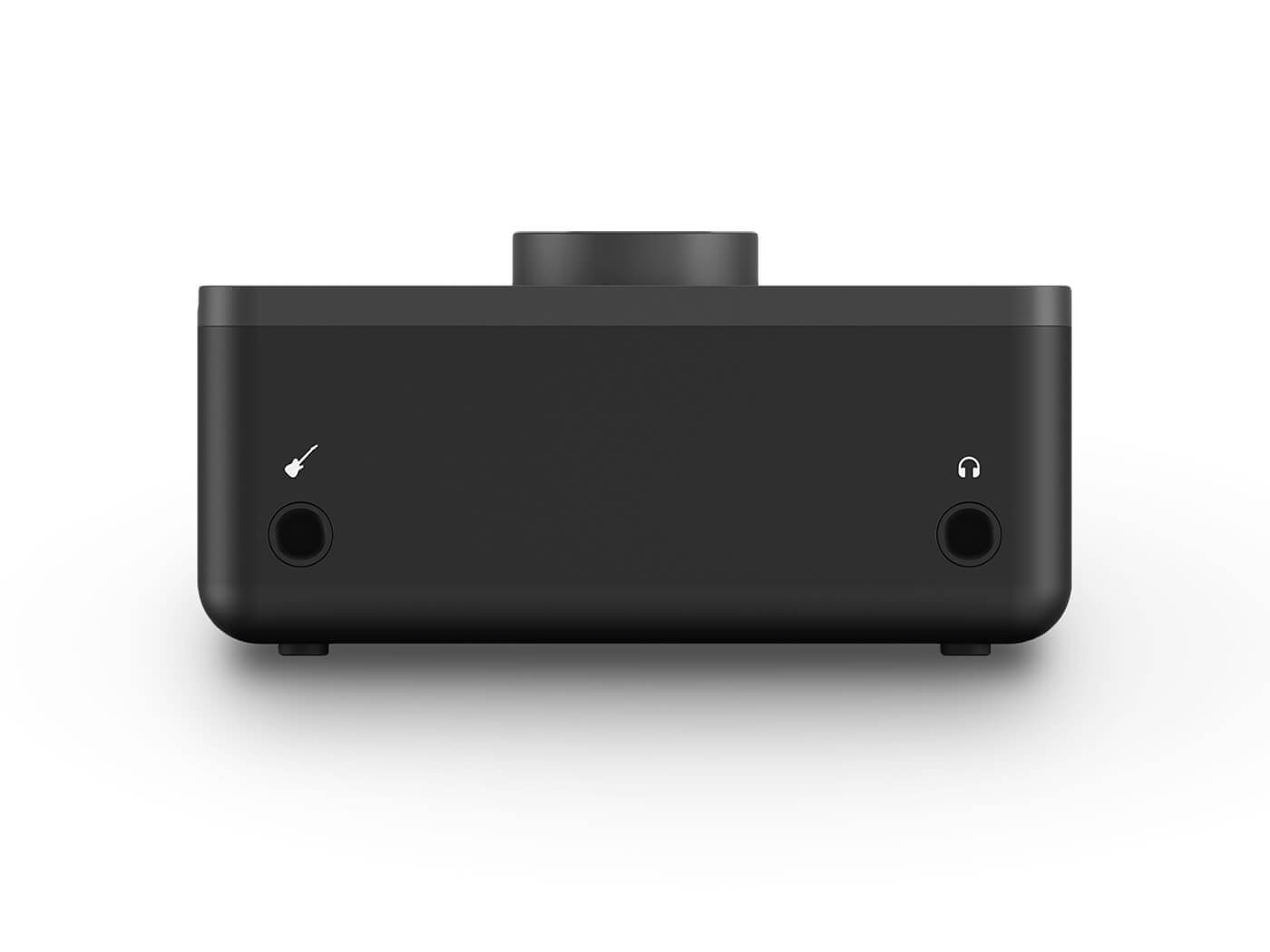 The EVO 4’s software includes no onscreen mixer or control panel. Pretty much all interaction with the hardware is done directly on the unit’s top panel via the rotary encoder and buttons, with visual feedback coming from the LEDs that light them.

Each button – with the exception of the phantom power button – switches the rotary encoder into a different mode. For example, to adjust a mic preamp gain, press one of the channel buttons, labelled ‘1’ and ‘2’, which light up to show that they’re active, and the encoder will control the gain while the LED ring will show the resulting input level; if your input clips, the channel button’s LED will flicker red.

You can have the EVO 4 set the input gain for you thanks to its Smartgain feature, triggered by pressing the green button on the unit. In this mode, the EVO 4 measures the input signal and sets an appropriate gain level. Once it’s satisfied with its setting, Smartgain is disabled and you’re ready to record. Though this works well and will be useful to those with limited recording experience, it is more conservative with regards to headroom than I would be, and the process wasn’t much quicker than setting the gain manually.

The EVO 4’s input monitoring setup is surprisingly flexible for such a small interface but manages to keep things simple nonetheless. You can choose between monitoring just the input signal, just the DAW signal or a mix of both. When in this mixed mode, you can easily adjust the balance between the direct and the DAW signal using the rotary encoder. You can also set the pan position of each channel’s direct monitoring signal no matter what monitoring mode you’re using.

Another of the EVO 4’s surprises is its audio-loopback feature, which provides an additional internal stereo bus that can be used for routing within your DAW. You can also use this for routing your main OS sound back to your DAW for recording or, conversely, your DAW’s output to a separate video-capture program – perfect of podcasters and YouTubers.

For an interface of this price, the EVO 4’s preamps and converters deliver clean and uncoloured sound with impressive definition, fidelity and features. I was initially concerned that the lack of onscreen mixer would be an issue but this was soon dispelled – Audient has somehow managed to condense all that functionality into just a knob and a few buttons, resulting in a simple, intuitive and effective interface. 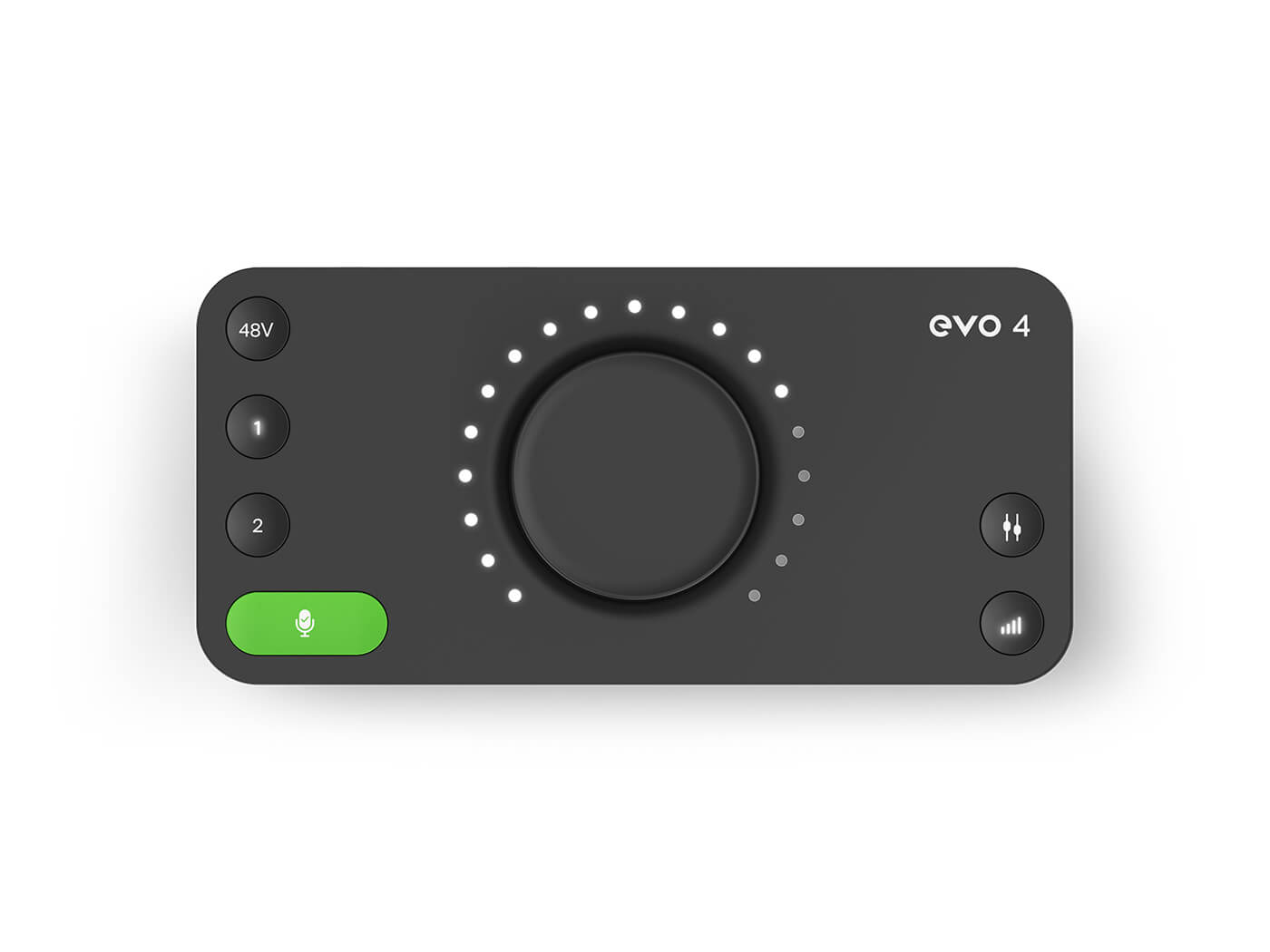 The budget end of the audio-interface market is a crowded place to be, with many units competing for mass-market attention from musicians who wish to do a bit of recording but don’t want to have to learn about audio engineering as well. Too often, though, attempts to circumnavigate the technicalities of the recording process result in limited and limiting feature sets that mollycoddle rather than assist the user. With the EVO 4, however, Audient has created an audio interface that is genuinely simple to use but is in no way simplistic. What’s more, the inclusion of a loopback bus makes it an ideal tool for creating gaming and tutorial videos for posting online, while its iOS compatibility increases flexibility. 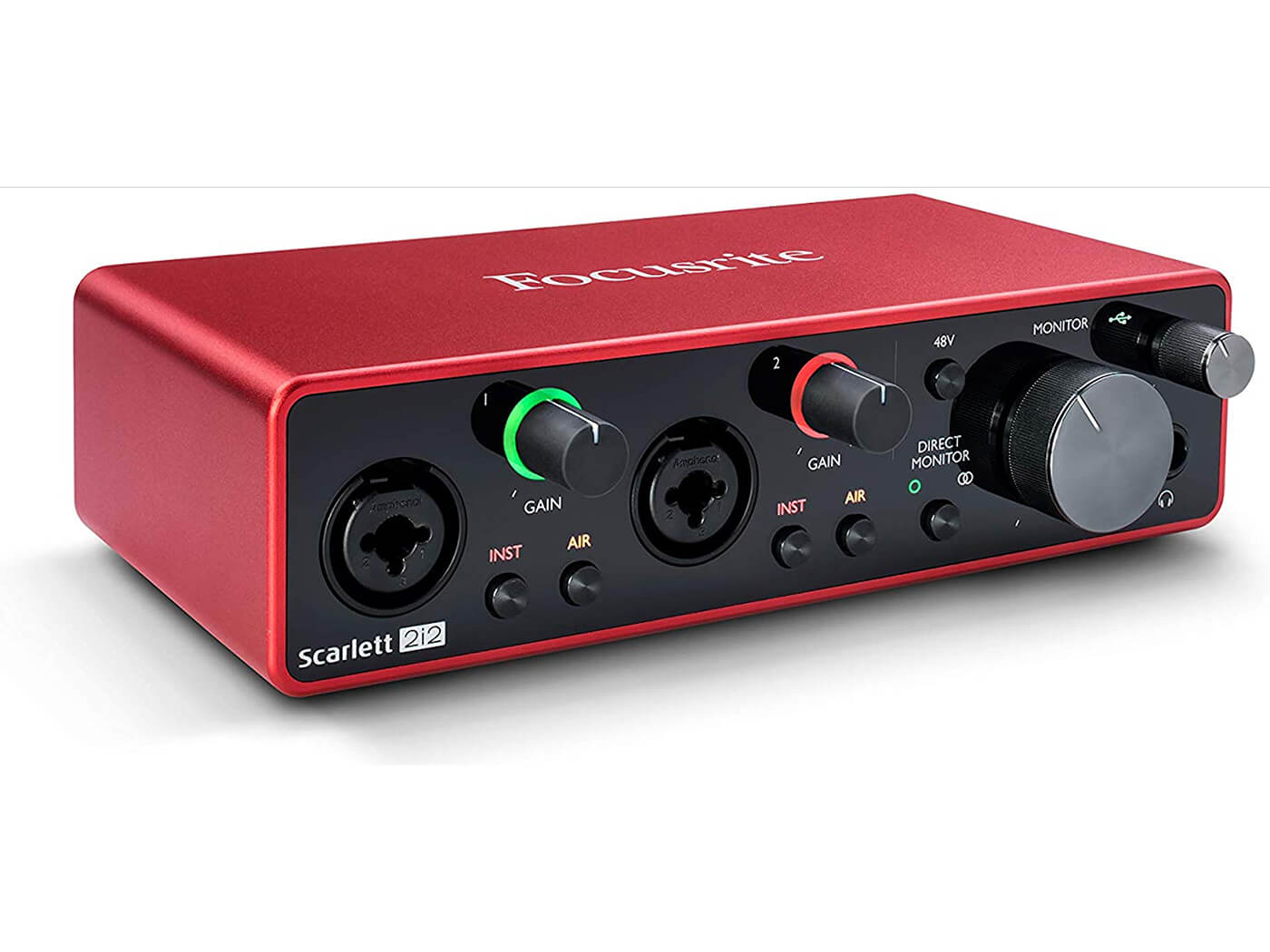 The Focusrite Scarlett 2i2 is a two-in/two-out audio interface that supports sample rates of up to 192kHz. Focusrite has always made a show of their mic-preamp technology and has included its latest Scarlett preamps in this third generation 2i2 interface. Both inputs are of the mic/line/instrument variety. 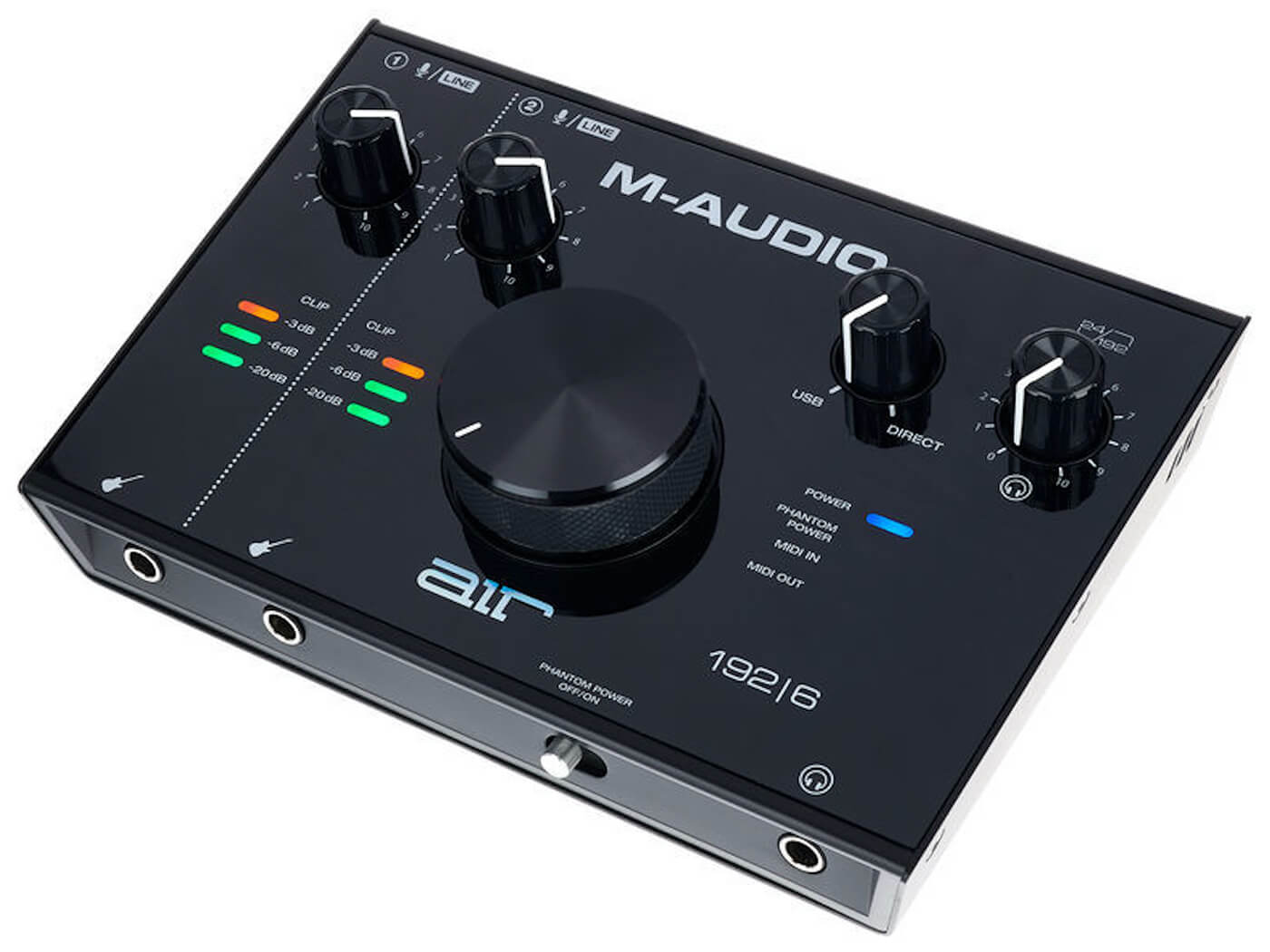 M-Audio’s new Air 192 6 shares the two-in/two-out configuration of the EVO 4 but adds good ol’ MIDI I/O into the mix too. MIDI may be bordering on ancient technology but it’s still relevant and useful so this gets a big thumbs up.