The latest update to Steinberg’s pro audio workstation sees big improvements for music makers and pro engineers alike, but do you actually need all that power? 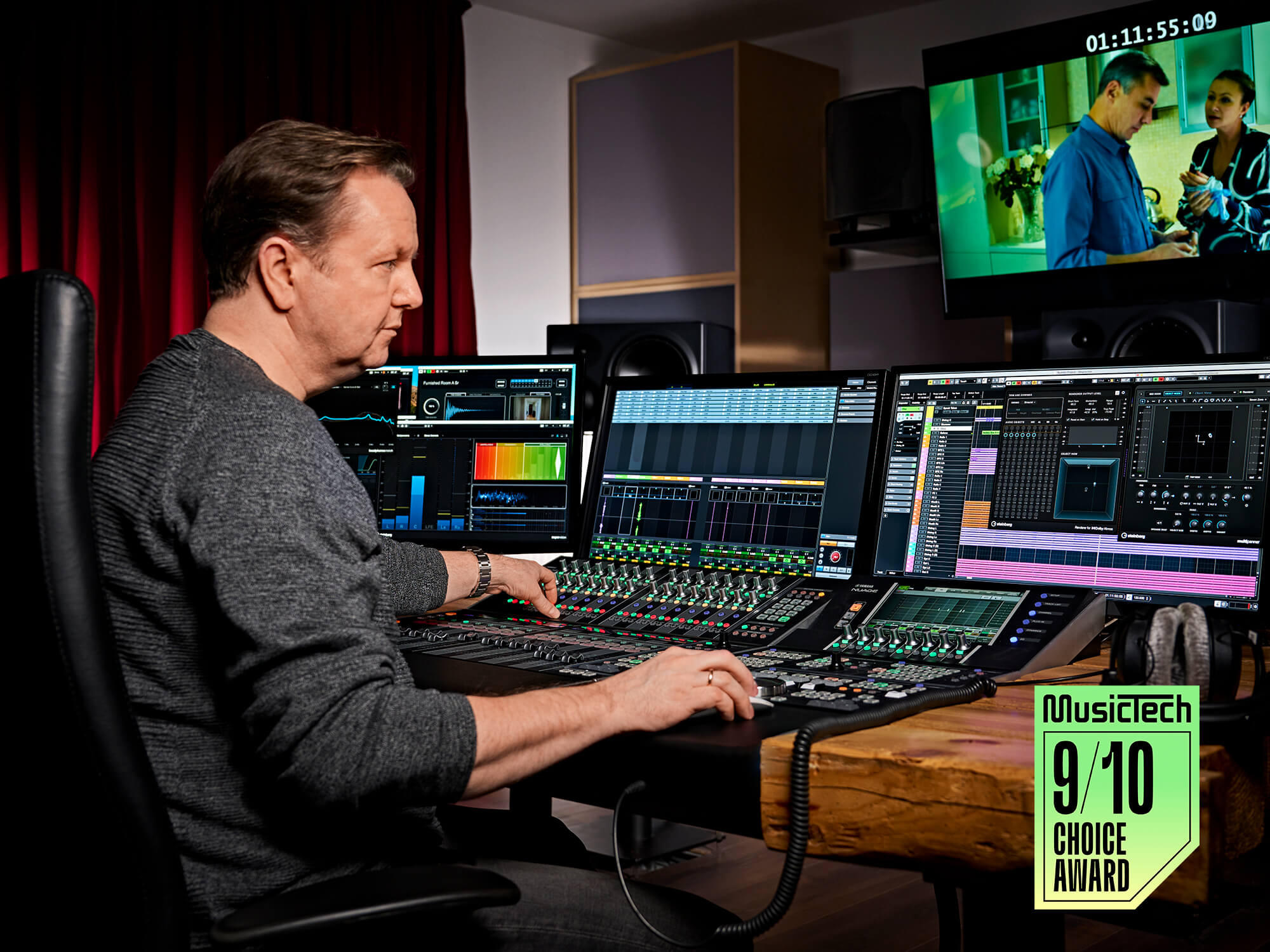 ⊖ Overkill for those only interested in music production

Being Steinberg’s longest-lived product, Cubase always gets first dibs when the developers open their bag of tricks and start handing out the goodies. But Nuendo never lags far behind, allowing its older sibling only a few weeks basking in the glory of its shiny new features before turning up with a smirk and saying “Yeah, I can do that too, but can you do this?”

Nuendo is essentially Cubase Pro on steroids. It boasts all the same music production tools and features but adds a big pile of specialised pro-audio functionality on top.

We looked at Cubase 12 recently and were exceptionally impressed by it. We won’t cover things here that we covered in that review, but suffice to say everything mentioned in that review also applies to Nuendo 12 – from the new dongle-free Steinberg Licensing system, all the way down to the tiniest graphical tweak.

The tools and functionality that set Nuendo apart from its stablemate are aimed at those who work meticulously with audio – that is, mixing and mastering engineers, game development studios, and audio post-production facilities working in TV and film production. 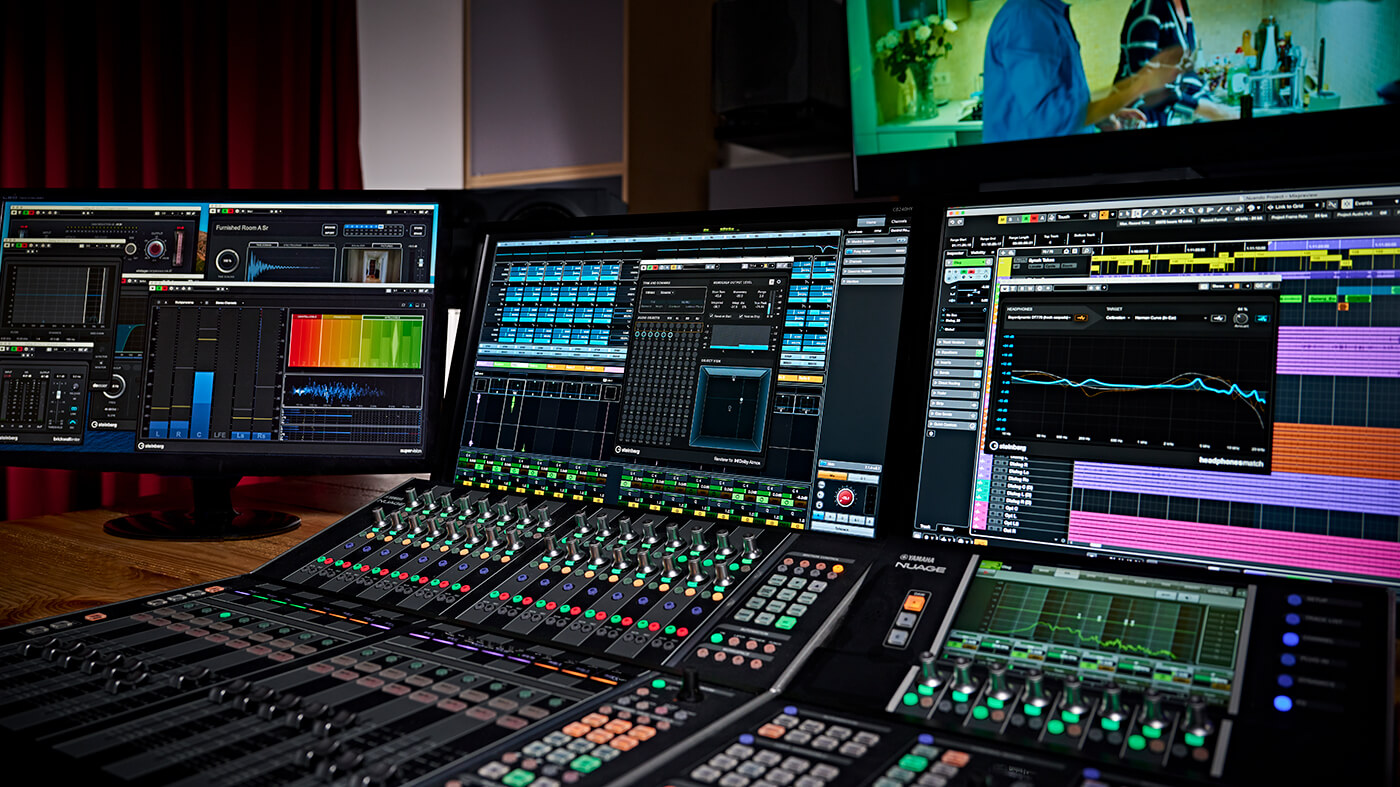 One of the most time-consuming and painstaking tasks in audio post is dialogue editing and replacement, where boom and/or lavalier mic recordings are aligned with dialogue recorded to the camera during filming, and voice overdubs are recorded and synced to the picture (known as ADR, or Automated Dialog Replacement). Nuendo’s workflow for these tasks has received a major overhaul in version 12.

Automatically stripping silence from dialogue recordings has been made easier and more reliable with an AI-driven Dialogue Detection mode within the Detect Silence tool. This recognises dialogue in even the noisiest of recordings and allows you to audition the results before committing the edits to the dialogue track.

From here, a new Create Markers From Events tool will create markers corresponding to each clip and can auto-set marker attributes using information derived from the clip – track name, timecode, scene number, and so on. This is especially helpful if you are working on a project for which there is no existing ADR script available.

If your project does have an existing ADR script, Nuendo can import this and create marker tracks from it. New here is support for Sounds In Sync’s EdiCue v4 software, widely used for managing ADR and cue management in TV and film production projects. At the most basic level, this support allows an EdiCue PDF cue list to be imported into Nuendo and converted into cycle markers, but the integration can be taken much further: With EdiCue running on the same computer, or on a computer connected to the same local network as Nuendo, data can be transferred and synced directly between the two applications.

The network ADR API used by Nuendo can also be harnessed by other applications so that, for example, changes made by a project’s script editors or language translators can be sent directly into Nuendo for the sound team to deal with. Furthermore, Nuendo can now import marker data from, and export it to, Netflix’s TTAL script format. Not only does this massively simplify the process of creating subtitle data that is accurately synced to the dialogue, but you can also include other TTAL metadata that can switch on-screen notices on and off, for instance.

Once converted into markers, the ADR data can be used with Nuendo’s ADR Taker, a tool that helps one manage overdubbing sessions, and this too has been given some attention in Nuendo 12. Most notably, the tool now includes a search system that allows you to filter the list of cue markers based on the attributes of those markers – character name, scene number, voiceover artist, etc., etc. Multiple filters can be combined too, helping you focus on just the clips that you need to work on.

Nuendo 11 saw the introduction of a complete Dolby Atmos mixing pipeline, which in Nuendo 12 has been improved with the new Setup Assistant for Dolby Atmos tool. This time-saver automates the process of converting a multi-channel mix into a Dolby Atmos mix, although most projects will still demand some specific tweaks once the Assistant has done the bulk of the work.

Dolby Atmos support may seem a bit redundant if you don’t have a surround monitoring system. However, the Renderer now has a binaural downmix option that creates an accurate three dimensional sound field through just two channels.

Being binaural means the system relies on your headphones being calibrated for a flat, natural response, which is perhaps why Steinberg has added Headphone Match to Nuendo. This plug-in, intended to be inserted on the monitor bus, applies a detailed frequency correction curve that counteracts the colouration created by your headphones. Over 350 curves are included, covering a huge range of different models of headphones. Plus, the plug-in can even apply a second curve to simulate the response of different sets of ‘phones.

Surround mixing gets a further boost with support for Space Controller OSC by Sound Particles. This phone-based app connects via wifi to Nuendo’s surround panning system and allows you to position a surround panner simply by pointing your phone at the place you want the sound to come from. The app is quite expensive (as many things in the TV and film production world can be) but is staggeringly effective when partnered with Nuendo’s other surround and Ambisonics tools.

Nuendo 12’s headline new features are aimed squarely at those working on TV and film production projects. But there is a raft of smaller tweaks and enhancements that are more generally useful: New metering modules for Supervision, improved video playback efficiency, high-resolution volume automation, and more. Although individually minor, the sum total of these small improvements adds up to an experience that is noticeably slicker and more streamlined.

If music production is your thing and you don’t do anything beyond that, then the advanced tools that Nuendo offers over-and-above Cubase Pro will be of little benefit to you. But if you work with audio at a professional level, where time is money, deadlines are tight and accuracy and efficiency are vital, you only have two realistic options – Nuendo or Avid Pro Tools. With this release, Steinberg has just made the former all the more attractive.