by Will Betts
#Audio Interfaces
Reviews

This 4×4 interface might be designed for streamers and newcomers to music production, but it has pro features, fantastic sound quality and is shockingly affordable. 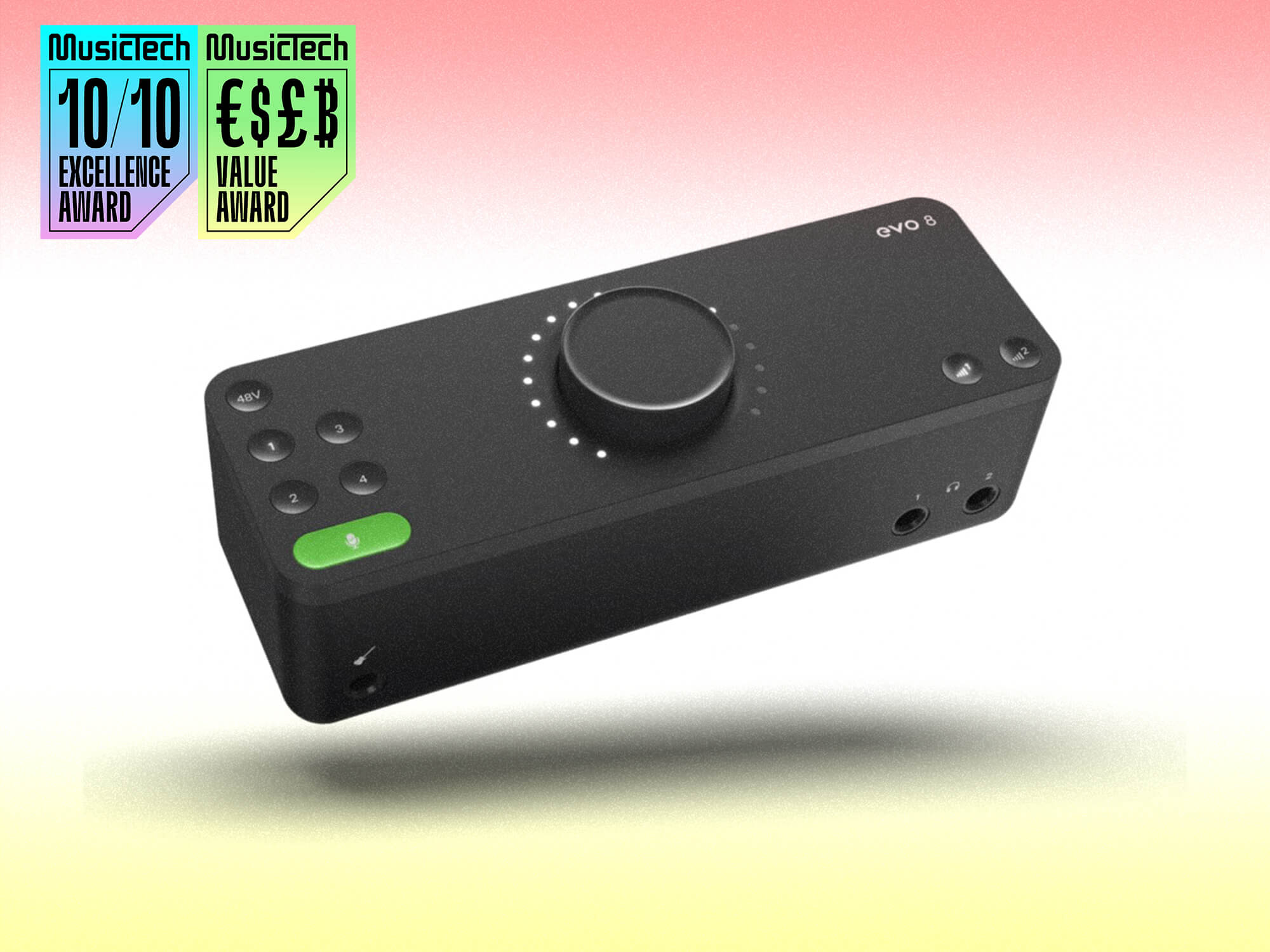 ⊕ Mostly straightforward to use
⊕ Transparent, quiet preamps
⊕ Smartgain is useful even for experienced users
⊕ Extraordinary value for money
⊕ Loopback routing ideal for streamers

⊖ Plastic housing may put some off

If you can master loopback and want a 4x4 recording interface that will stay on your desk, this surpasses anything else at the price, with features that make it a no-brainer for bedroom musicians, streamers and podcasters.

Audient designed prosumer sub-brand Evo to appeal to people who need an audio interface, but don’t want to think about how to make everything sound good. And, in large part, they succeed. So, is this the ultimate affordable 4-in, 4-out audio interface? And can it, as its maker suggests, make great recording effortless?

At the staggeringly affordable price of $199/£155, there isn’t much competition. Even so, Audient has doubled down on modern features that are desirable for recording musicians, streamers and podcasters. For example, Smartgain automatically sets input levels, so you’re less likely to clip your inputs. This is extremely helpful for novices and pros, and is superbly executed. As long as your source is loud enough for Smartgain to detect, the process only takes a few seconds and removes the guesswork from setting levels. It’s a far more useful function than you may think at first. Simultaneously setting multiple input levels sparks joy. In our tests, Smartgain set the peak input level at around -6dBFS, and could handle spoken word, singing, synth, and guitar without trouble.

But with only one knob on the top of the device, is there enough hands-on control? Surprisingly, yes. The Evo 8’s one-knob approach is comparable to the UA Apollo Twin, minus a few bells and whistles (dim, HPF, pad, polarity invert). You select the control parameter by clicking the top-panel input and output buttons, then twist away. The white ring of LEDs surrounding the main knob conveys a lot of information: input and output gain while you’re moving the knob, plus output metering when you’re not.

However, the LED ring’s position encircling the central control knob on the flat top of the device means that if you push it further than a foot away, the knob begins to obscure the LEDs. An angled top would avoid this but undoubtedly increase the price.

Also, LED colour changes would be practical as you move through modes, as with the Apollo Twin. Separate input and output meters be a little more intuitive as well. That said, you can still tell when your inputs are clipping; the backlit input buttons turn red. And, critically, Evo 8 is a fifth the price of an Apollo Twin – with two more preamps. In Evo 8, Audient has created a functional metering and level-setting solution at an unbeatable price.

All front panel controls are intuitive and immediate. Want to mute an input or output? Hold down its button. Want to link channels 3 and 4? Hold down both their input buttons. Want phantom power? Hit an input button, then press the 48V button. The basics are exactly as simple as you’d hope. 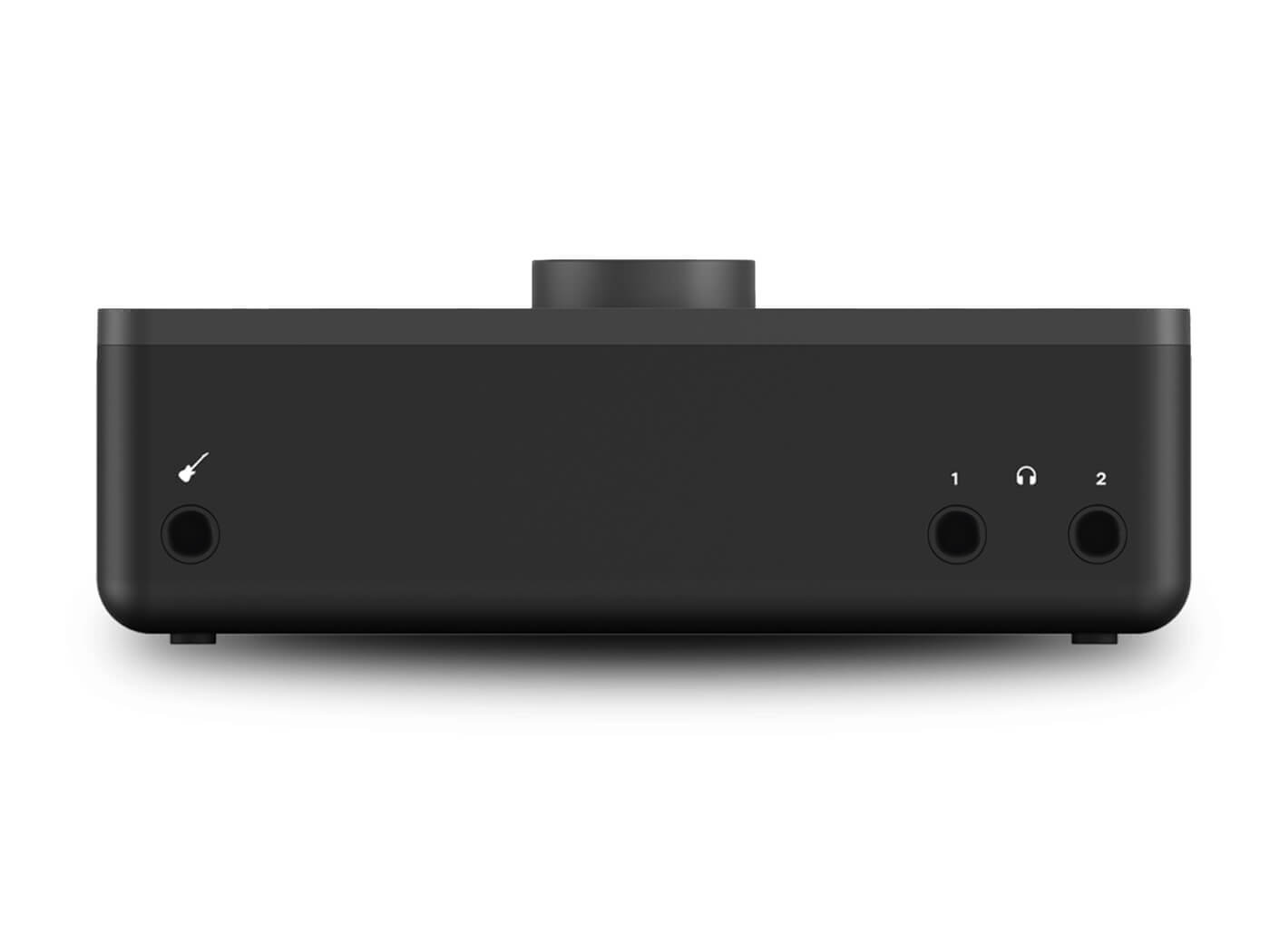 The software mixer gives you control over preamp gain, per-channel phantom power, channel linking, mute, solo, plus direct monitoring (0.6ms roundtrip latency at 44.1kHz) and system playback levels. What’s a little less obvious is how to set up loopback, and artist mixes on outputs 3 and 4. Thankfully, a couple of straightforward videos walk you through these processes. While you can set up loopback for capturing system audio into your DAW or streaming your system output to Twitch (et al.), this isn’t quite as effortless as you might like. That’s not Audient’s fault; it’s just the nature of virtual signal routing.

However, once you’ve got it how you want it, you can save mixer states in the Evo software – preamp gain, routing and all. This feature makes switching between podcasting, streaming and music recording setups that much easier.

Another neat touch is that you can change preamp gain inside certain DAWs, including Logic Pro X, meaning you don’t even have to switch windows to the mixer. Unfortunately, there’s no way to save input levels within your DAW projects, but the Evo mixer software is more than capable. 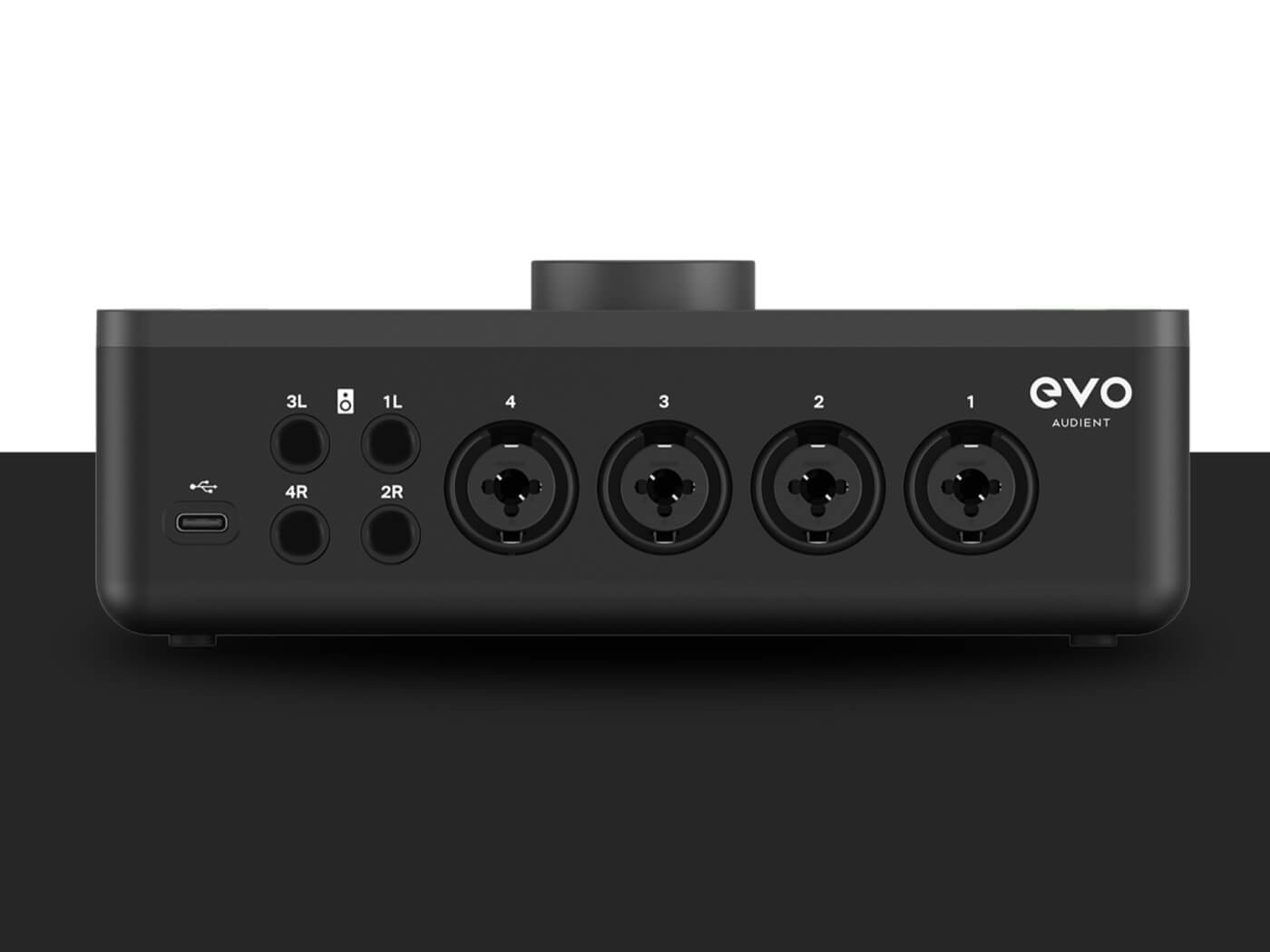 The preamps are remarkably clean and transparent with a gain range of 58dB – enough for most microphones. Notably, there is comfortably enough gain for an SM58, Røde NT-1 and Aston Origin. You can even get a passable level out of the notoriously low-sensitivity Shure SM7B for spoken word, but you do have to max out EVO 8’s input gain.

Phantom power is available on all four inputs independently, another surprise at this price, but only if you connect via USB-C. Because Evo 8 is bus-powered, using a USB-A connection only gives you enough juice for two channels of phantom power. So, think twice before buying if you only have USB-A ports. Evo 8 is fully compatible with Mac and Windows, working beautifully on a 2018 MacBook Pro, but it’s currently not supported on iPhone or iPad. (The Evo 4 is.)

For guitarists, the front-facing JFET instrument input is well located and sounds excellent. The Evo 8 also comes with the Torpedo Wall of Sound amp modelling plug-in from Two Notes Audio Engineering which pairs well with the bundled Cubase LE. There are also 2GB of free Loopcloud samples for beat-oriented producers and a rotating library of plug-ins and tutorials available for Evo 8 owners, making this an even more attractive prospect.

As far as the outputs go, the main outputs are transparent, and the ADA conversion allows samples rates up to 96kHz. The dual headphone amps are plenty loud enough for professional headphones, and they mirror outputs 1/2 and 3/4. The monitors are also automatically muted when you plug in headphones. This is an incredibly sensible design decision for beginners, vastly reducing the chance of creating wild feedback loops. 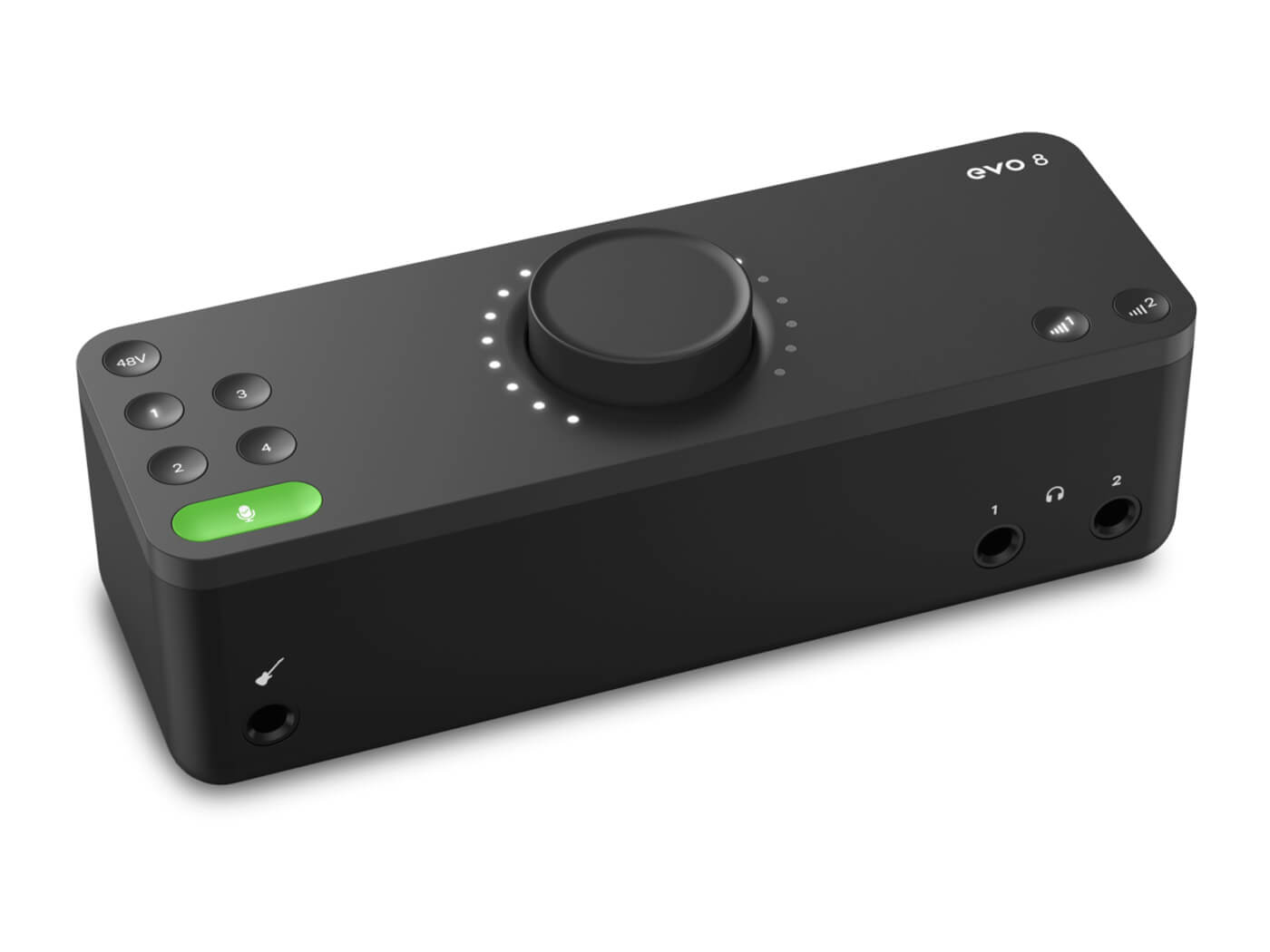 The whole package crams in so many features that there have to be some trade-offs, especially at this price. The most obvious is the plastic housing. If you’re likely to throw it into a rucksack, it would be worth getting a case to avoid putting dings in the plastic edges. We also wouldn’t want to put too much pressure on the front-facing panel, but it’s designed for life on a desk, so this shouldn’t be an issue. It’s also relatively lightweight but, in service of being desk-bound, has two long, practical rubber feet that stop it sliding around and make it feel more robust.

In all, the Evo 8 is an excellent and full-featured interface, especially for the price. If you’re a podcaster, streamer, bedroom musician, or any combination thereof, we can’t recommend this interface highly enough.