Denon’s stylish DHT-S517 doesn’t cost the earth, and will sit nicely beneath most TV sets – but it’s low on features. 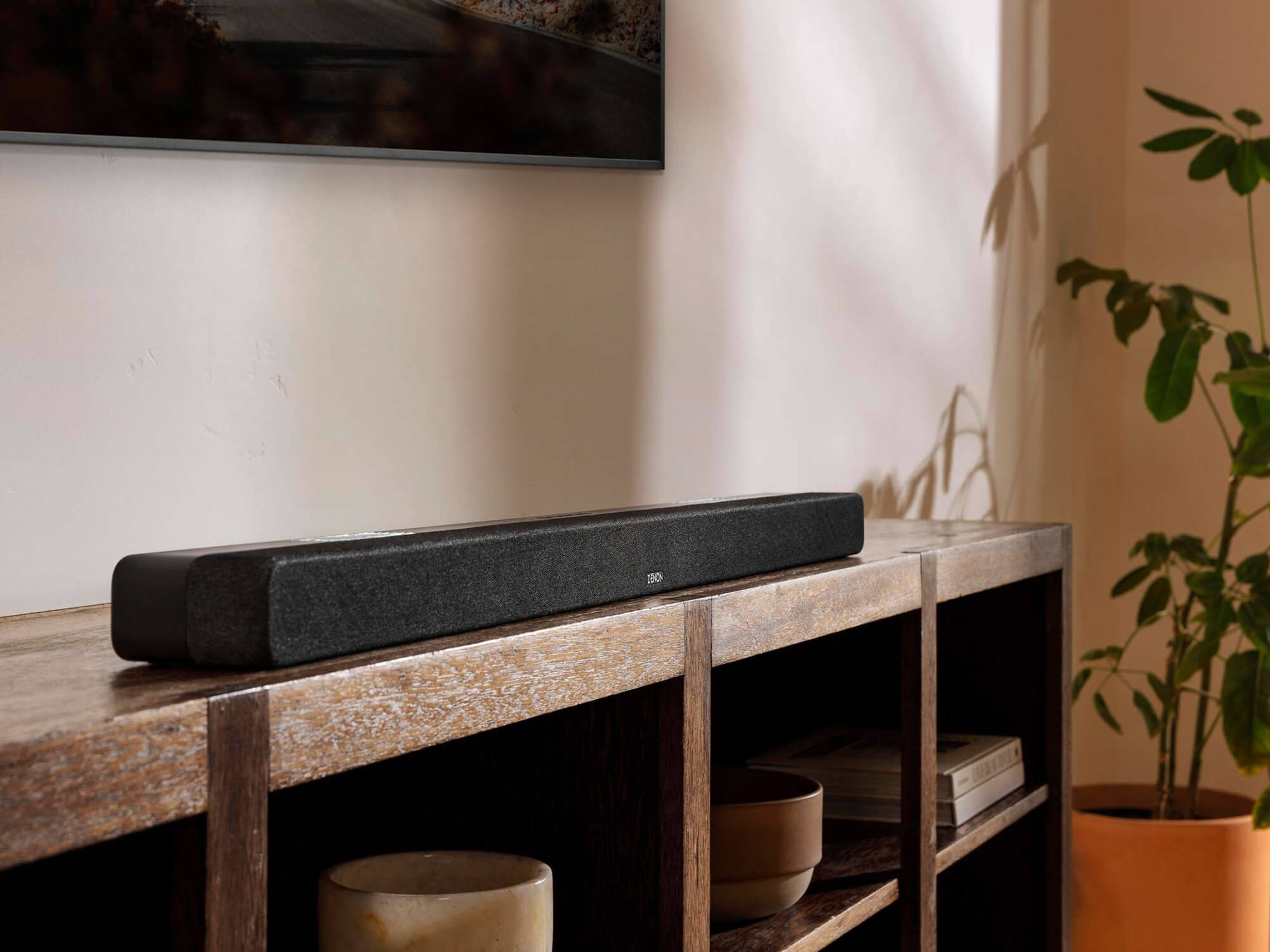 The Denon DHT-S517 is a nicely-priced soundbar and subwoofer combo that supports the Dolby Atmos surround sound standard. Denon pitches the DHT-S517 as a complete package for budget buyers who want to enhance their TV and movie-watching experience. It’s a 3.1.2 system with no option to add side speakers – Denon’s likely thinking here is that its target audience won’t need any.

While you can stream music to the DHT-S517 via Bluetooth, or connect devices via a 3.5mm connection, there’s no support for the likes of Spotify or Amazon Music, or APIs like Apple AirPlay or Google Chromecast. In fact, there’s no internet connectivity or app support at all. 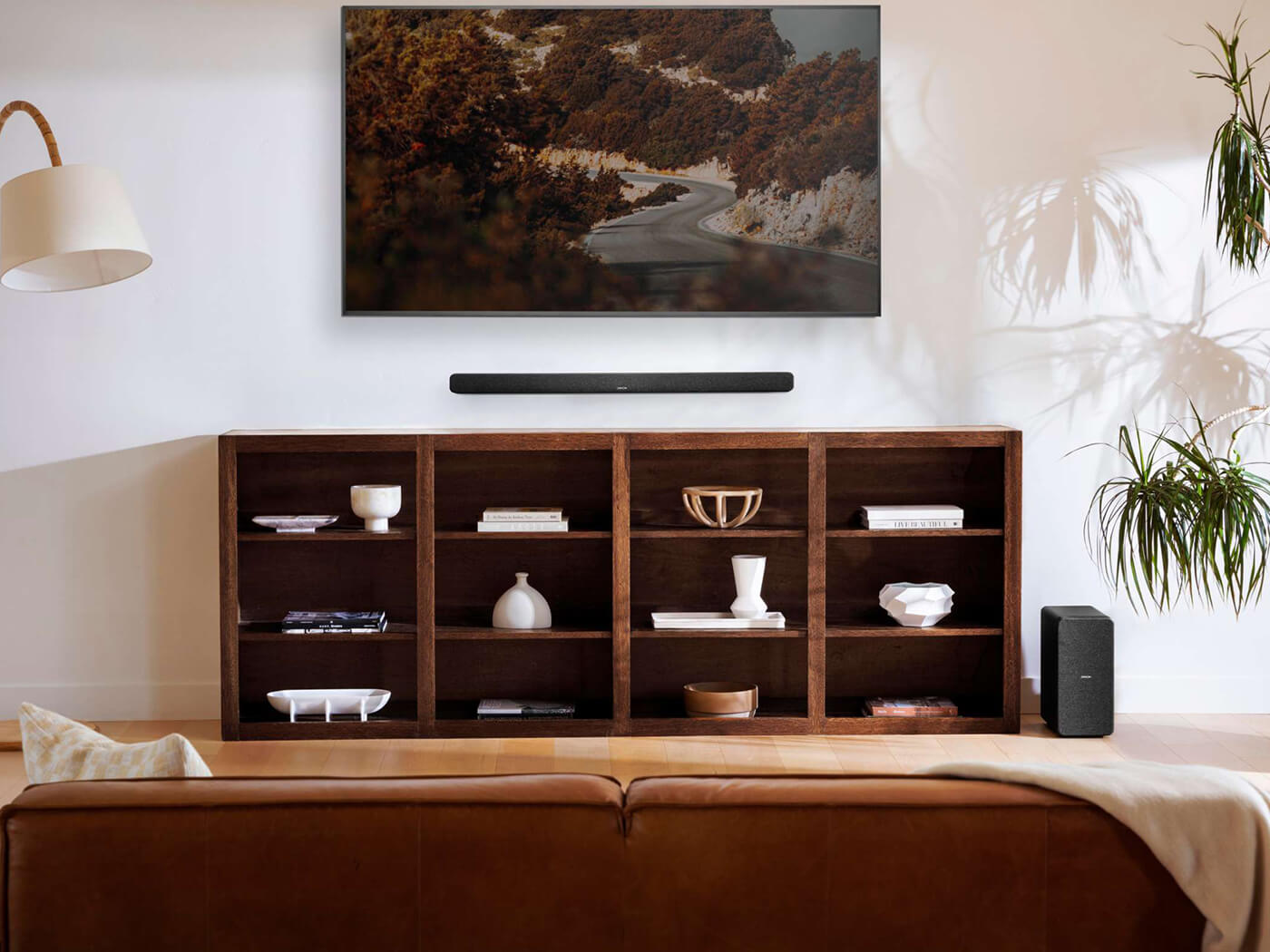 Low and flat, the Denon DHT-S517 will easily sit under most TV sets and stands with little fuss. It’s also fairly wide but you have the option of mounting it.

The front speakers are covered by a fabric weave, while the upward-firing speakers are hidden behind black plastic grilles. In between the grilles sit five controls: power, source, Bluetooth, and volume controls. Round the back of the soundbar are audio and visual connections – two HDMI ports (one with eARC) optical audio, a 3.5mm AUX, and a USB port for firmware updates.

The subwoofer features a single front-firing speaker that’s covered in the same fabric that’s on the soundbar and a port on the back. It’s relatively short, lightweight, and can be easily hauled around. 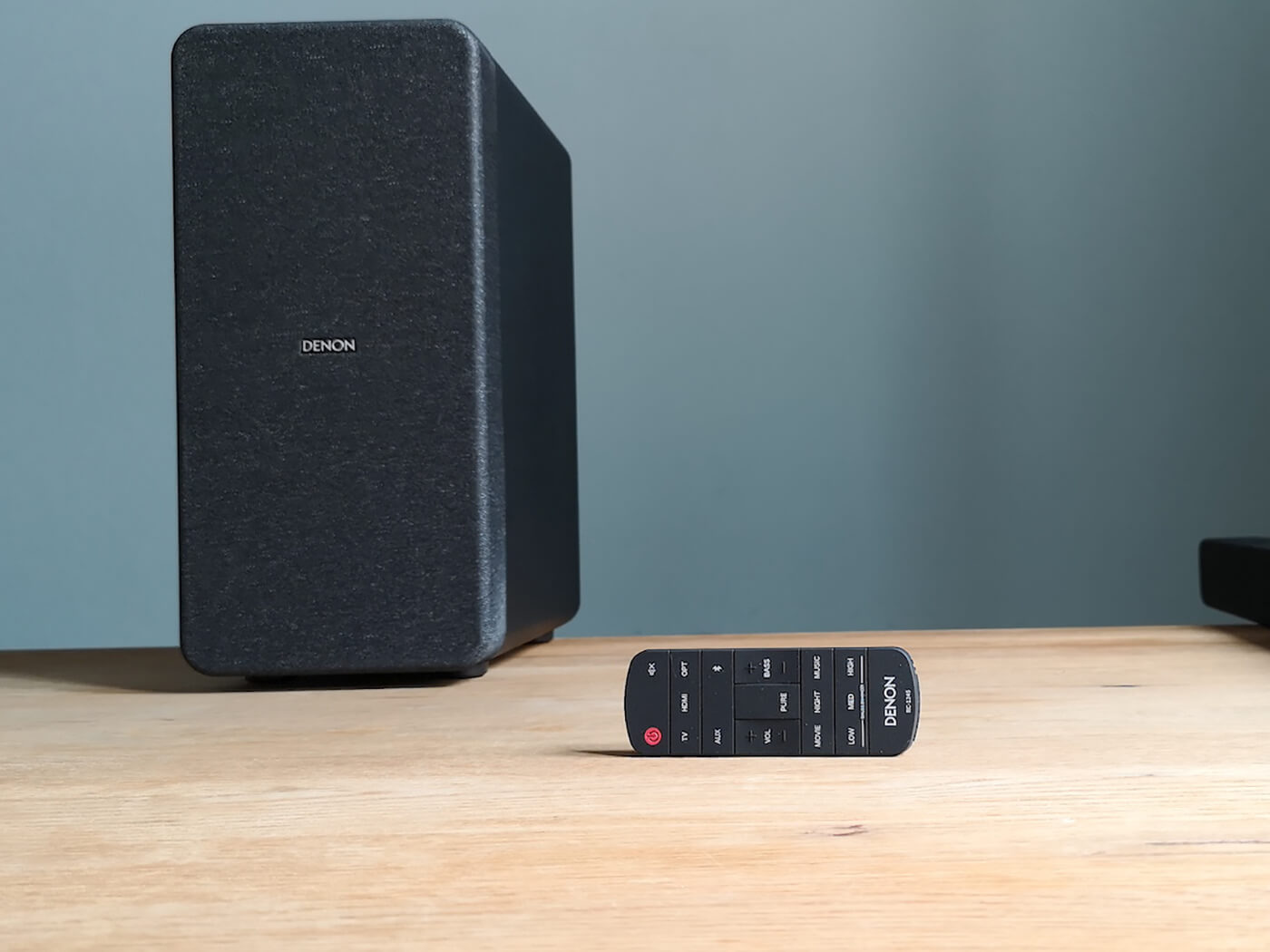 Thanks to eARC, it’s possible to get the Denon DHT-S517 set up in seconds with an HDMI cable connected to the respective ARC port on your TV. There’s also an optical connection for those with older TVs but, if you’re using this, note that this standard lacks the bandwidth to support Dolby Atmos.

Once you’ve connected the soundbar to your TV, you’re ready to pair it with the subwoofer, which can be done with a quick touch of the connect button on the back of the sub. The devices should pair right away, although if you’re having issues, we suggest simply moving the devices closer together. Denon doesn’t specify what the effective range of the wireless connection is, but we were able to get a stable connection with the subwoofer set up five metres away from the soundbar.

The supplied remote does come with the standard sound modes – Movie, Music, and a bass-light, neighbour-appeasing Night mode – a Dialog Enhancer, and two volume rockers for bass and overall volume. Volume and bass can be raised by fifty and eight increments, respectively, and there are three levels of speech boosting. In the middle of the remote there’s a Pure button, which resets everything to default. 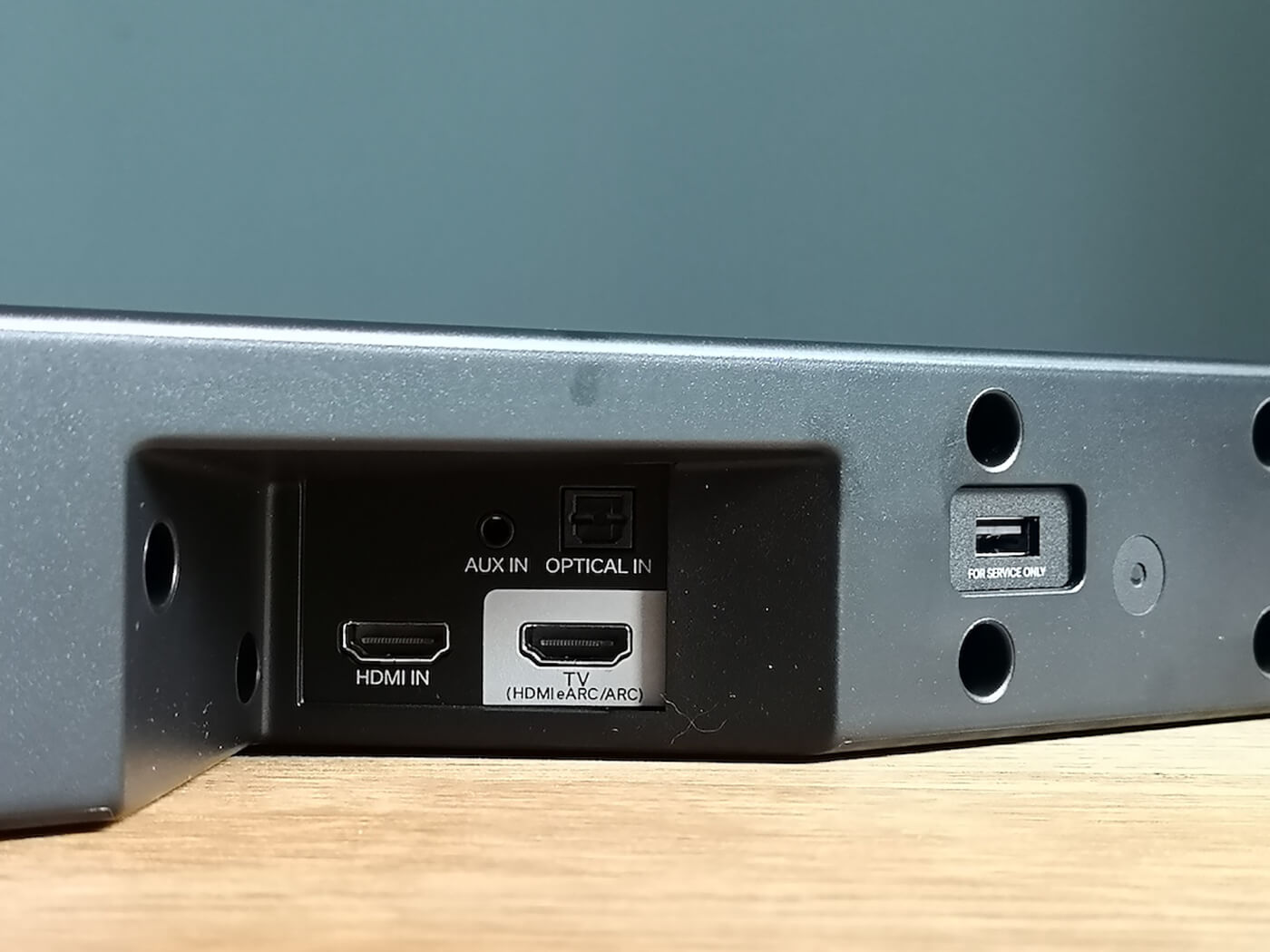 The Denon DHT-S517 soundbar features a full-range driver with a tweeter and mid-range driver on either side. These fire sound forwards and then there’s the two upward-firing drivers, plus the driver of the subwoofer.

Sound quality is impressive and generally well-balanced, although the powerful subwoofer can sometimes be too powerful.

Whether you’re watching a news report or a classic episode of Game of Thrones, dialogue is always clear and prominent, and regardless of which of the three enhancements you have activated, although when watching films with busy soundtracks, you might want to lift things a little.

That wasn’t required when watching the 4K version of Dune, which features a Dolby Atmos soundtrack. The Denon DHT-S517 went to town here, with the subwoofer rumbling powerfully whenever a sandworm passed through the frame. More subtle details, like the noise that accompanies Baron Harkonnen’s spinal implant activating, and the very high-pitched thwip of the hunter-seeker zipping through the air are well-defined and placed appropriately. 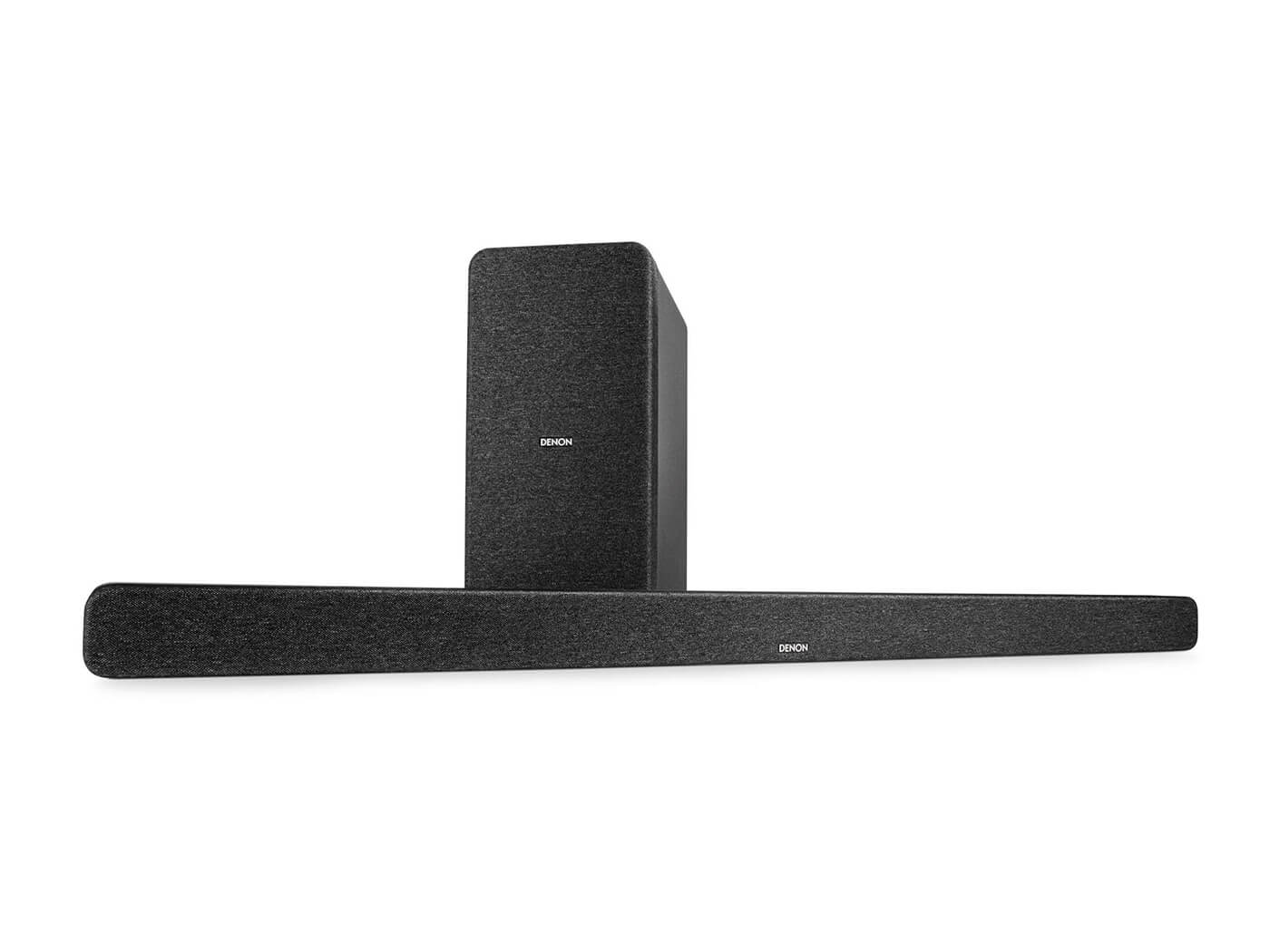 Oddly, the impression of height is no more or less pronounced than it is on the Sonos Beam gen 2 or the Polk MagniFi Mini AX. This is not to say that it’s bad, just curious, as neither of the other soundbars feature upward speakers.

The scene in which the ornithopters first take off also demonstrates that the sub can sometimes be too powerful – the buzz of the vibrating wings made the floor shake with the bass turned all the way up. While you can lower the levels, when watching something like Dune, you’re probably going to want to have everything cranked, so it felt sad to have to dial things down.

Similarly, the bass in Dead Prez’s Hip-Hop and Massive Attack’s Angel can also sound too much at high volumes – great for parties where people are too busy/drunk to worry about audio fidelity, perhaps not for other times. 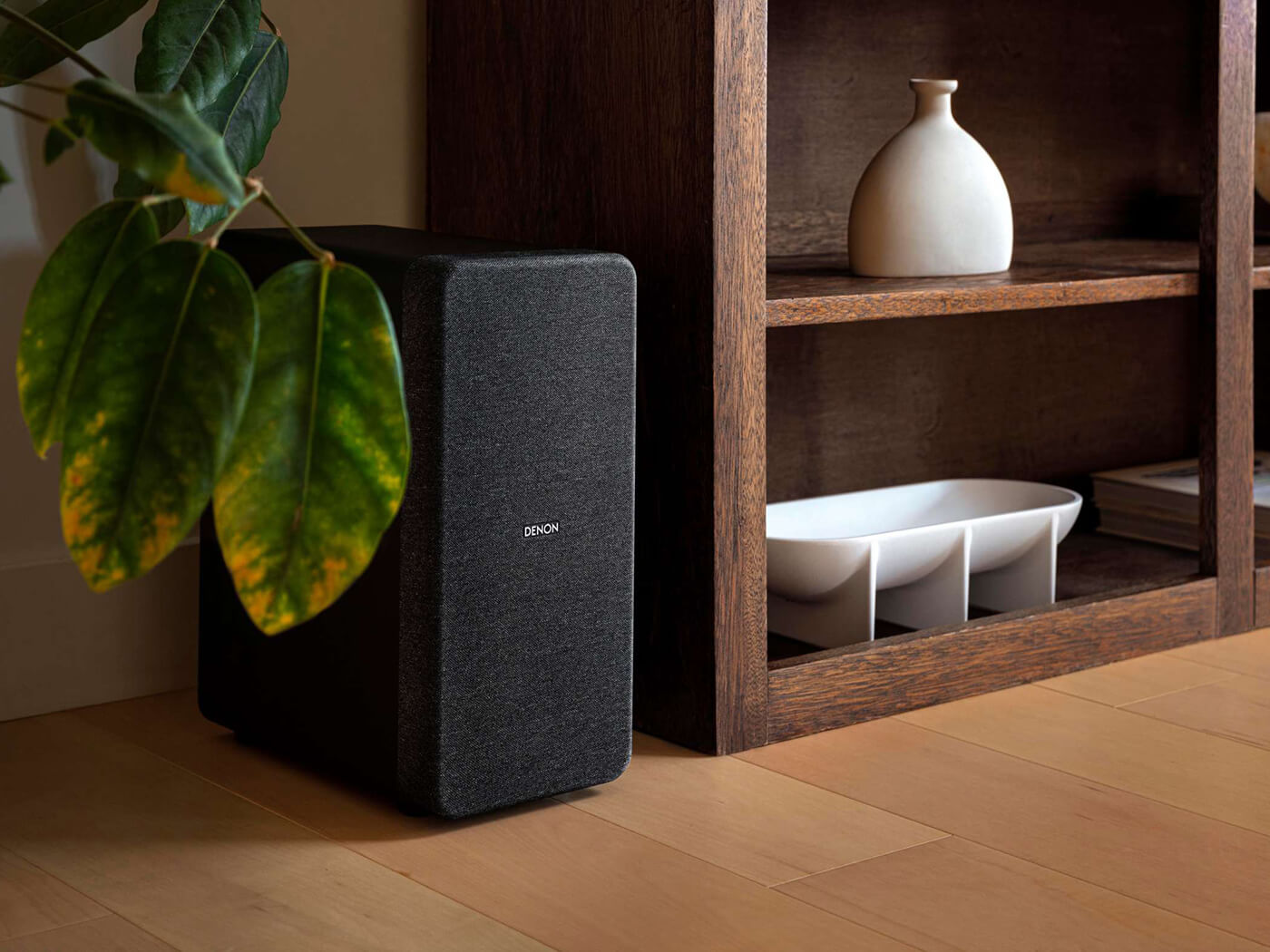 That said, there was clear and defined separation between the floor drum, bass guitar and low piano notes in Peter Gabriel’s Intruder with the volume all the way up. Cleaner tracks like Dave Brubeck’s Take Five sounded terrific at full volume, and although moments like the drum solo verged on cacophonous, there was no distortion of high and middle frequency noise.

It’s a shame that you’re relegated to Bluetooth and can’t stream over Wi-Fi. Likewise, not being able to have the DHT-S517 incorporated into a multi-room system is a bit of a drawback – the Denon Home Sound Bar 550 lets you do this, as does the Polk React and the Sonos Beam gen 2, which are only a few hundred pounds or dollars more.

This is, essentially, the Denon DHT-S517 soundbar in a nutshell – if a decent soundbar and sub is all that you’re after, this is one of the best value choices out there now. On the other hand, for a bit more money, there are more versatile options available. 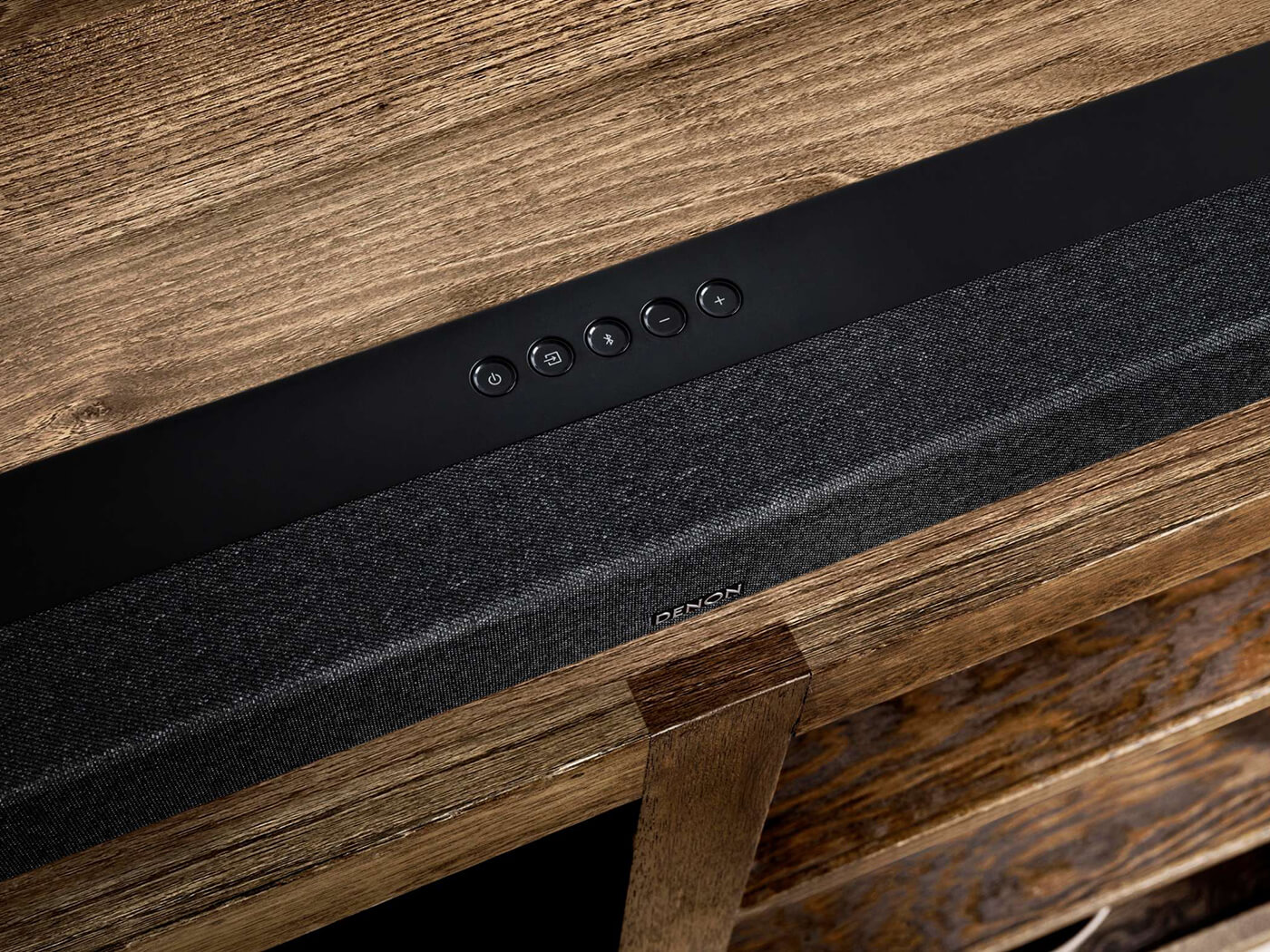