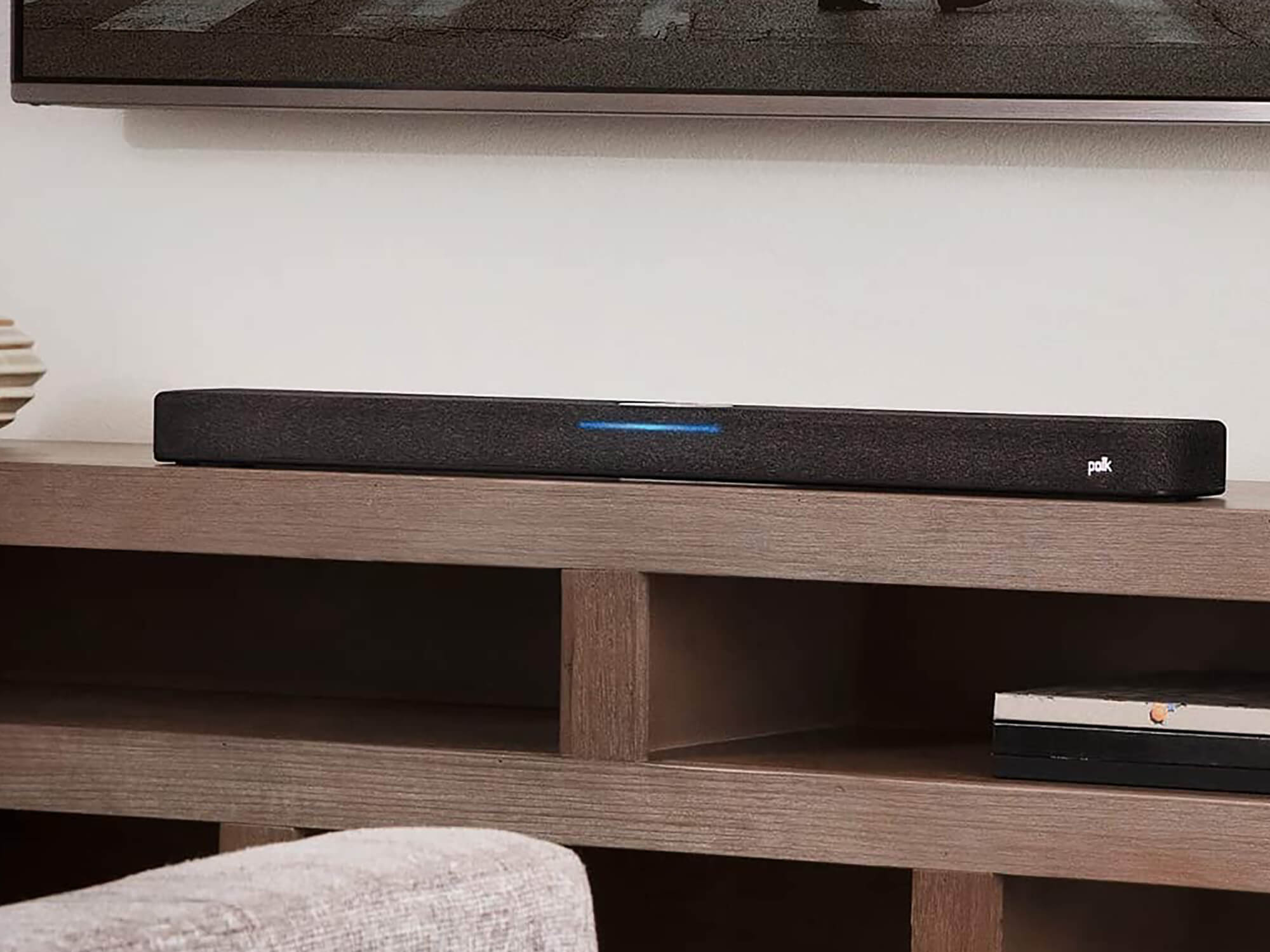 
The Polk React is a mid-range soundbar that’s pitched primarily at folks who either don’t have the living room space for a huge sweeping thing that’s upwards of a metre wide. Boasting a low profile and a neat and compact design, the Polk React will sit comfortably underneath almost any TV set out there, and it promises buyers solid, well-balanced sound performance. The Polk React is also very attractively priced for a standalone soundbar, and should cost you no more than $249/£249.

The Polk React’s low profile and wallet-friendly price belie its powers. While there’s no support for immersive sound standards like Dolby Atmos and DTS:X, this neat and tidy stereo soundbar supports Dolby Digital and DTS surround sound. While you’d have to shell out more, the Polk React can be paired with a wireless subwoofer and side speakers as well, easily transforming it into a 4.1 home cinema system, if you’re minded to upgrade in the future.

Sweetening the deal is Amazon Alexa support. This allows you to control the Polk React with your voice, or use the included remote control, if you’d prefer. If you have several Alexa-enabled devices set up around the home, the Polk React can be set up to support multi room music, or you can have it simply play music on its own – Spotify Connect is also supported, and naturally, you can stream via Bluetooth as well.

However you slice it, the Polk React packs a lot of features into a small package, and has a clear upgrade path ahead of it.

The Polk React is one of more compact soundbars out there, wider, but lower, than the Sonos Beam gen 2. It’s not quite as small as the Panasonic SoundSlayer SC-HTB01, but then again, few soundbars are. It’s lightweight too, weighing just under 3kg. All of this means that most buyers will be able to easily slide the Polk React underneath their TV set without the need for a stand or a wall mount, but if you do want to mount it, the option’s there.

The Polk React is available in every colour so long as that colour is black – while you don’t get much in the way of options here, the dark grey fabric coating which covers the top, front, and sides is pleasant to the touch, easy on the eye, and isn’t much of a dust magnet.

A circular control panel sits up top, in the centre, and features volume controls, a mute button for the far-field microphone, and a multi-purpose action button, which you’ll likely only use when setting up Alexa for the first time, and connecting the Polk React to your home Wi-Fi network.

Around the back is a recessed area for all of the physical connections – power, USB, optical, HDMI – and a tiny rubbery button for pairing the Polk React with other speakers.

In addition to the Polk React soundbar I was also sent a React Sub review sample. This is a tall cuboid with a single downward-firing speaker set in a ported cabinet. A pair of feet on either end raise the speaker roughly 3cm up off of the floor, allowing bass tones noise to bounce off of the floor and accentuate the low end noises produced by the React soundbar. It weighs 7.5kg, which means it’s pretty sturdy once you’ve picked out a position for it.

By virtue of the fact that there’s an HDMI ARC port here, getting the Polk React soundbar up and running if you’ve a TV with an ARC port is a simple case of connecting the soundbar to your TV with an HDMI cable and powering on. Volume can then be adjusted using your standard TV remote. Older TVs with an optical audio connection can connect to the Polk React this way and just use the supplied Polk remote to adjust volume.

However you’re connecting the Polk React to your TV, the Polk remote is what you’ll be reaching for most of the time, as this lets you tweak bass and treble levels, adjust left and right balance, and pick from a number of sound presets.

There’s no app which will allow you to control the Polk React from your phone, but you will need your phone to set up Alexa. Install the Alexa app (iOS, Android) if you’ve not already got that, and from there you can connect the Polk React, by heading to Device, searching for ‘Polk React’, and following the instructions. The only other thing you’ll need to have to hand is your Wi-Fi password – this part of the process should only take a couple of minutes, depending on the status of your Internet connection.

Once you’ve connected the Polk React to your home network via Wi-Fi, you’re now free to talk to Alexa just as you would any other smart speaker, group the Polk React with any other Alexa-enabled devices in your home. Once connected to Wi-Fi, you can stream music from your phone or laptop through Spotify Connect as well. This is handy if you’d rather not rely on Bluetooth when streaming music, but for all other occasions, you can default to that instead.

The Polk React delivers excellent, well-balanced stereo sound on its own, and while the bass response is slightly lacking in places, when the React soundbar is paired with the React Sub, low end noises are accentuated wonderfully. I wasn’t sent a pair of SR2 side speakers ($199/£159) with my review unit, so I can’t comment on how well everything works together here, but I can say that the Polk React and the React Sub work together very well.

It should be noted that there are no upward-firing speakers on the Polk React, and there’s no support for immersive sound standards like Dolby Atmos and DTS:X. In practical terms this means that the soundstage is not as tall as other soundbars, and sound effects aren’t placed with the same fidelity as they would be through a soundbar which ticks both of these boxes.

Frankly, this is not much of a big deal – sure it doesn’t offer an immersive surround sound experience in the same way that the Sonos Beam gen 2 does, but then again, the Polk React is about half the price.

If this is a dealbreaker for you, then you should be shopping around for a soundbar which supports immersive sound, and you’d be hard pressed to find one at this price which does. The Panasonic SoundSlayer SC-HTB01 fits that bill to a point, but there’s no option to add extra speakers to that soundbar, whereas the Polk React can, with a little extra investment, be turned into a 4.1 system.

Supported formats aside, content with Dolby Atmos soundtracks like Crouching Tiger Hidden Dragon and Jumanji: The Next Level and still sounded fantastic through the Polk React, with soundtracks benefitting from clear dialogue and good positioning of sounds across the stereo space if not above and around you.

A moment where the impact of the subwoofer was really apparent came when watching a recent episode (S3E3) of Succession, during the scene where Kendall and Gregory are driving through the city in a limo, with club music thumping. Without the sub, the bass notes are punchy, audible and clear in the mix, and the sound travels nicely across the stage in one cut where the car moves from right to left across the frame. But with the subwoofer paired, you can actually feel the bass. When the scene cuts to an interior shot, the club music shifts in the mix accordingly, and with the subwoofer firing straight into the floor, those low notes hit as you’d expect them to, and it made for a very pleasing and immersive experience.

The low-end punch of the sub comes into its own when streaming music, too. Bauhaus’s She’s in Parties sounds great without the sub, with the passive radiators giving David J’s fretless bass playing some extra lift, but when it’s paired with the Polk React, the bassline of that song really jumps out of the mix with plenty of definition.

Likewise, the fuzzed out line of Dead Prez’s Hip-Hop sounds fine through the Polk React on its own, albeit with the bassline and kick drum sounds starting to sound indistinct at high volumes, but with the React Sub paired, you benefit from better separation, not to mention a deeper bass sound.

The bass from Billie Eilish’s I Didn’t Change My Number is barely noticeable at all until its played through the React Sub, but otherwise, there’s a lot of definition and clarity here, with the articulation of the main vocal sounding crystal clear at all volume levels.

Tracks with less of an emphasis on bass sound very good with the sub too. While there are not a lot of low notes in Steve Howe’s acoustic guitar piece Mood For A Day, having the sub paired means that the natural resonance of the track sounds a lot fuller. With or without the sub, there’s plenty of detail here, as there is on Dave Brubeck’s Take Five, where little details like bass string bends stand out in the mix alongside more prominent snare rolls and cymbal hits.

While it’s a bit frustrating not being able to play around with a virtual EQ, the Polk React’s remote lets you raise and lower bass and treble on tracks by four increments either way, so you have some control over how everything sounds. The LEDs on the front let you see how far you’re pushing everything each time, so it’s easy to get things sounding how you’d like them to.

Of the four preset modes available to you – Music, Sport, Movie, Night – it’s probably Music that you’ll want to have selected for most occasions whether you’re listening to music or not, because it’s the most neutral of the four options. Sport accentuates dialogue, so you can hear the commentary over the background noise, while Movie mode emphasises the bass. Night mode, as it does on most other soundbars, flattens the bass entirely, allowing you to carry on watching TV without low end noises passing through the walls and annoying housemates and neighbours (too much).

Generally speaking, the Polk React offers a very good experience on its own, it’s just lacking in terms of bass reproduction. I would say that if you’ve got the living room space for it, the extra $199/£179 you’d be spending on the React Sub is absolutely worth it.

This poses a bit of a dilemma for buyers who are in the market for a good value all-in-one soundbar with a mind to upgrade things a little later down the line, although of course if your budget can’t stretch to $400/£400 all in one go, then buying the Polk React is a no brainer. If Dolby Atmos support is something you’re interested in, however, then the Sonos is the option to consider, even though that’s more expensive.

Another alternative is the Samsung HW-S60A. While this mid-range soundbar doesn’t support Dolby Atmos either, priced at around £300, it’s easy on the wallet, can be paired with a subwoofer, and features Amazon Alexa support too. It’s bigger than the Polk React, but features more speakers, including side-firing horns, and can generate a taller soundstage.