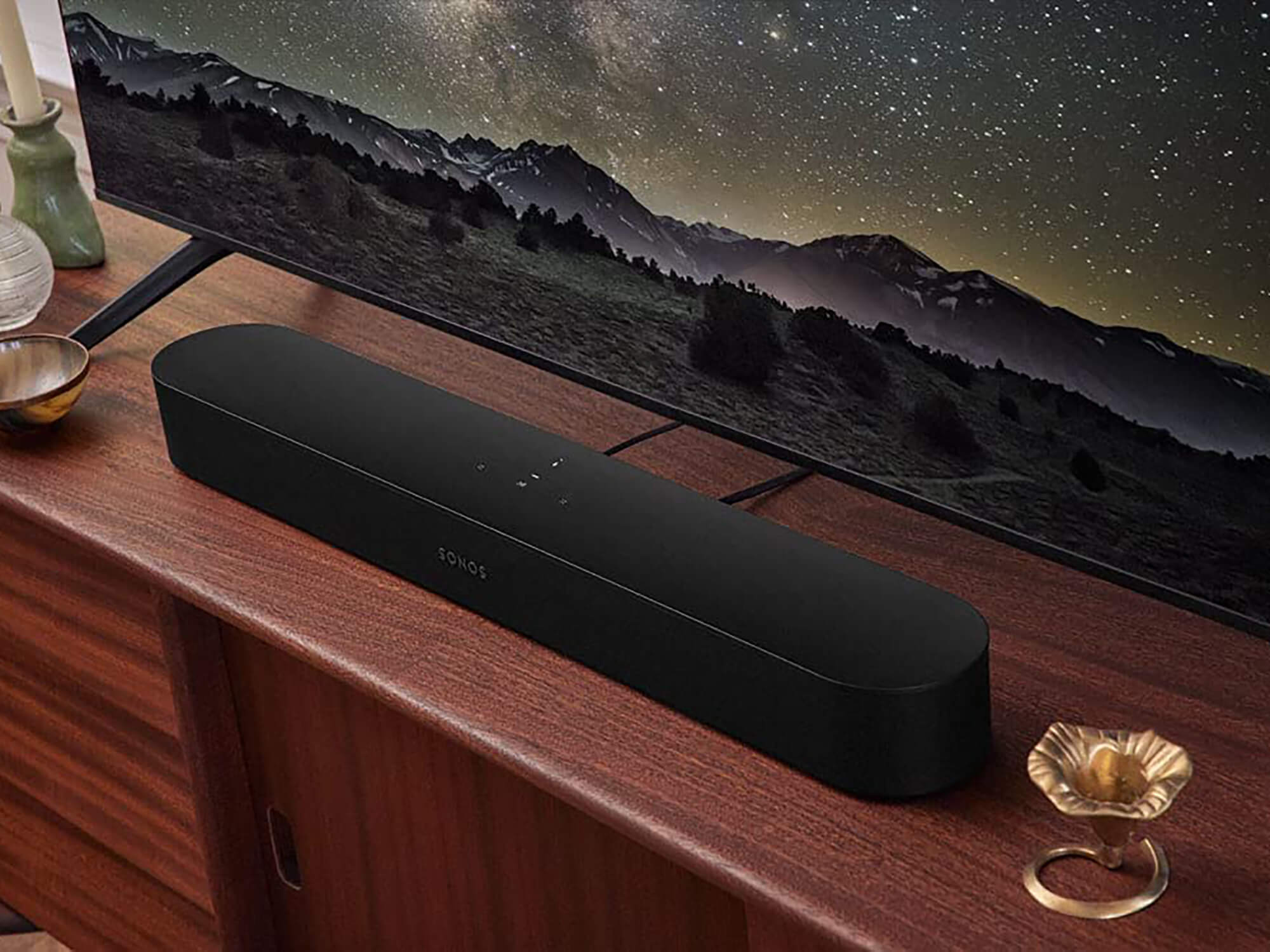 ⊖ 3D surround sound not convincing
⊖ Can only calibrate via iOS devices

The Sonos Beam Gen 2 is the latest version of Sonos’ wildly popular Beam soundbar from 2018.

For this 2021 refresh, Sonos has added a more powerful processor, which allows for the Dolby Atmos 3D sound standard to be supported, and a newer HDMI eARC port, which has more bandwidth. The latter also lets the Sonos Beam Gen 2 support lossless audio formats.

On that note, support for Amazon Music Ultra HD is coming later, and will arrive on the Beam Gen 2 – and the Sonos Arc – via future updates. Likewise, support for DTS Digital Surround (5.1) is in the pipeline.

Essentially, this puts the Sonos Beam Gen 2 on par with the bigger, more powerful and more expensive Sonos Arc in terms of what it can do and what standards it supports.

As well as functioning as a soundbar that’ll enhance the sound of movies and TV shows, the Sonos Beam Gen 2 is a music speaker that can be linked to other Sonos S2-supporting wireless speakers as part of a multi-room service, or as part of wireless surround sound system for your living room.

Whatever your intentions for multi-room audio and home cinema systems are (or aren’t), here’s how the Sonos Beam Gen 2 fares. 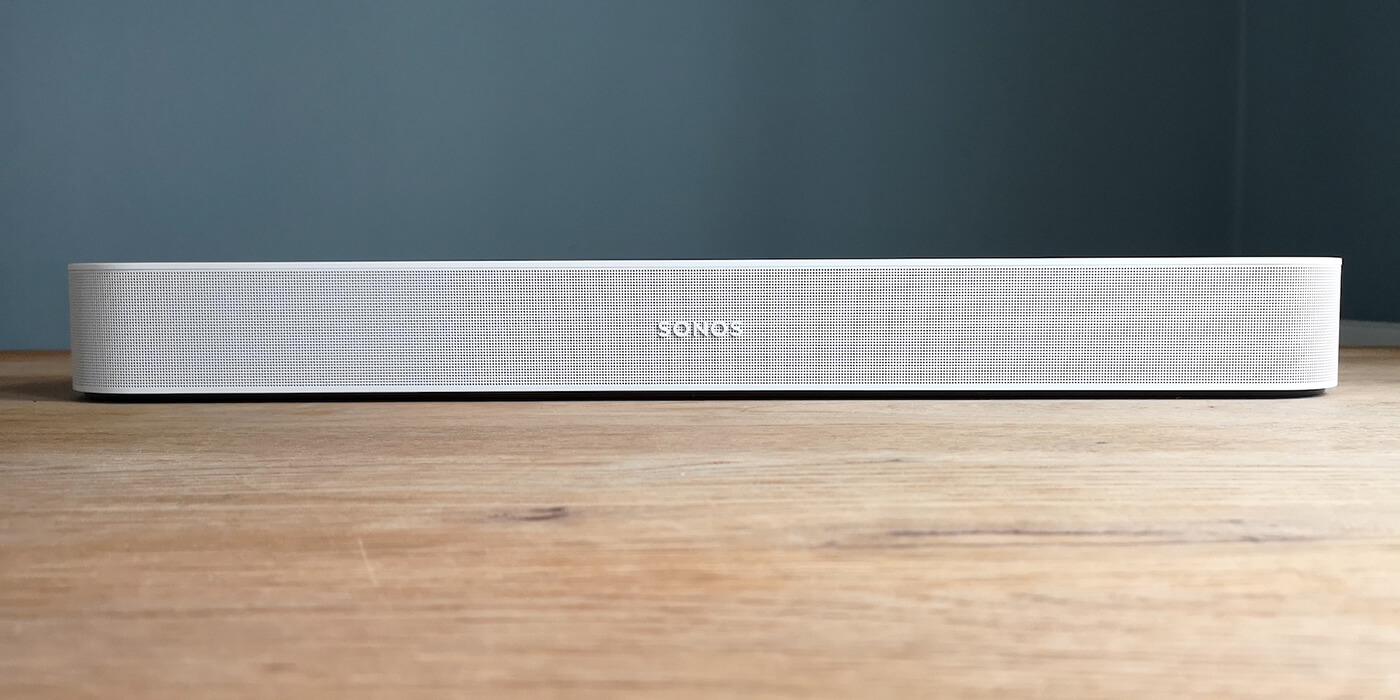 The Sonos Beam Gen 2 is small compared to most soundbars. It’s just over half a metre wide, and less than 10 centimetres tall and deep, so it’ll easily sit underneath most TVs. There are threaded holes on the base, so you can mount it on a stand if you wish.

As with the Sonos Arc, the Beam Gen 2 is available in black and white, and the front and sides feature micro-drilled holes, and on the top there are touch-sensitive media and volume controls.

Around the back, there are very few connections, with just a single HDMI port and an Ethernet port. As with the Sonos Arc, there’s no optical port. But if you have an older TV, Sonos includes an HDMI-optical adapter in the box – although using this means you won’t be able to experience Dolby Atmos surround sound, as the optical connection will just convert it to Dolby Digital 5.1.

The Ethernet port is included so you can connect the Sonos Beam Gen 2 to your router with a wired connection if you’re having WiFi trouble. 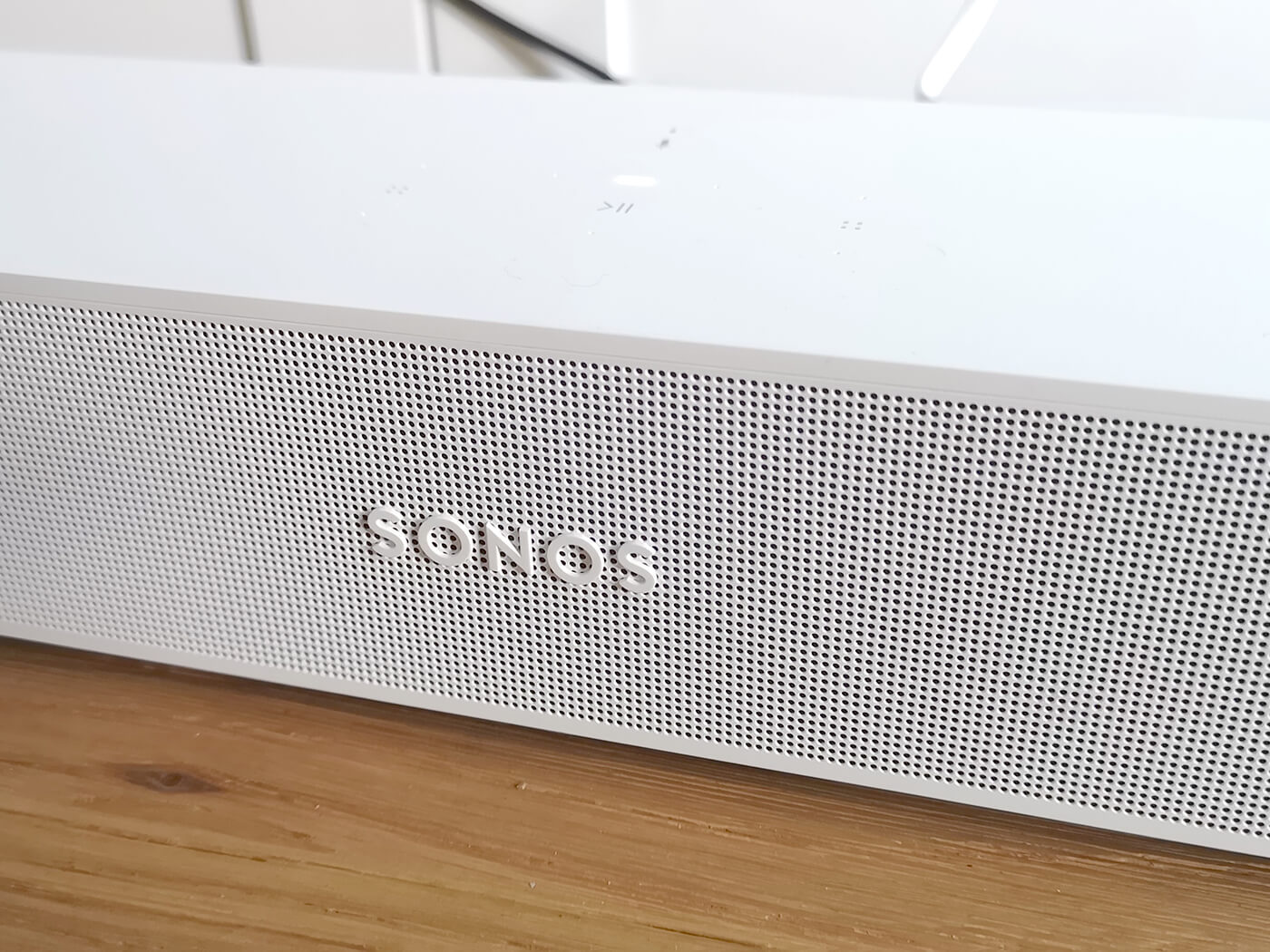 Once you’ve downloaded the Sonos app(s), you’ll need to have your WiFi network password to hand to complete the setup, or connect the Sonos Beam Gen 2 to your router via Ethernet. You’ll also need to create a Sonos account, unless you already have one.

When you have everything installed, connected, and you’re signed in to your account, you’re ready to begin the setup process, which takes roughly five minutes.

Like the Sonos Arc, the Sonos Beam Gen 2 supports Trueplay Tuning, which lets you calibrate the speaker so that it can scan the acoustic properties of the room it’s playing in. This is very easy to do, as it uses your phone’s mics to help calibrate everything. Unfortunately for Android users, this feature is currently only available on the iOS version of the Sonos app. And since there’s no calibration mic included in the box here, you’ll have to nicely ask someone with an iPhone if you can borrow their device for a few minutes.

Calibrated or not, at this stage, the Sonos Beam Gen 2 is essentially ready to go. The Sonos apps are a little confusing at first, but that’s mostly because there are a lot of options at your disposal, and so it takes time to get familiar with everything.

When you’re watching TV and you’ve got the Sonos Beam Gen 2 selected as the audio source, the app will give you access to a quick menu which lets you adjust the volume, and toggle two sound modes, Night Sound and Speech Enhancement. These reduce bass tones and boost dialogue respectively, and can be toggled independently, so you can have both modes on or off as you please.

If you want to tinker with sound levels further, there’s a simple virtual equaliser, which lets you tinker with bass and treble modes, and there’s also a Loudness feature. This is turned on by default, and will boost bass frequencies when the volume is turned down low.

When listening to music, you’re really spoiled for options, as you can essentially treat the Sonos Beam Gen 2 soundbar as you would any Sonos wireless speaker. The Sonos apps can integrate with your accounts on Spotify, Amazon Music, 7Digital, Apple Music, Deezer, SoundCloud, Mixcloud, Last.fm and Tidal, to name a few. 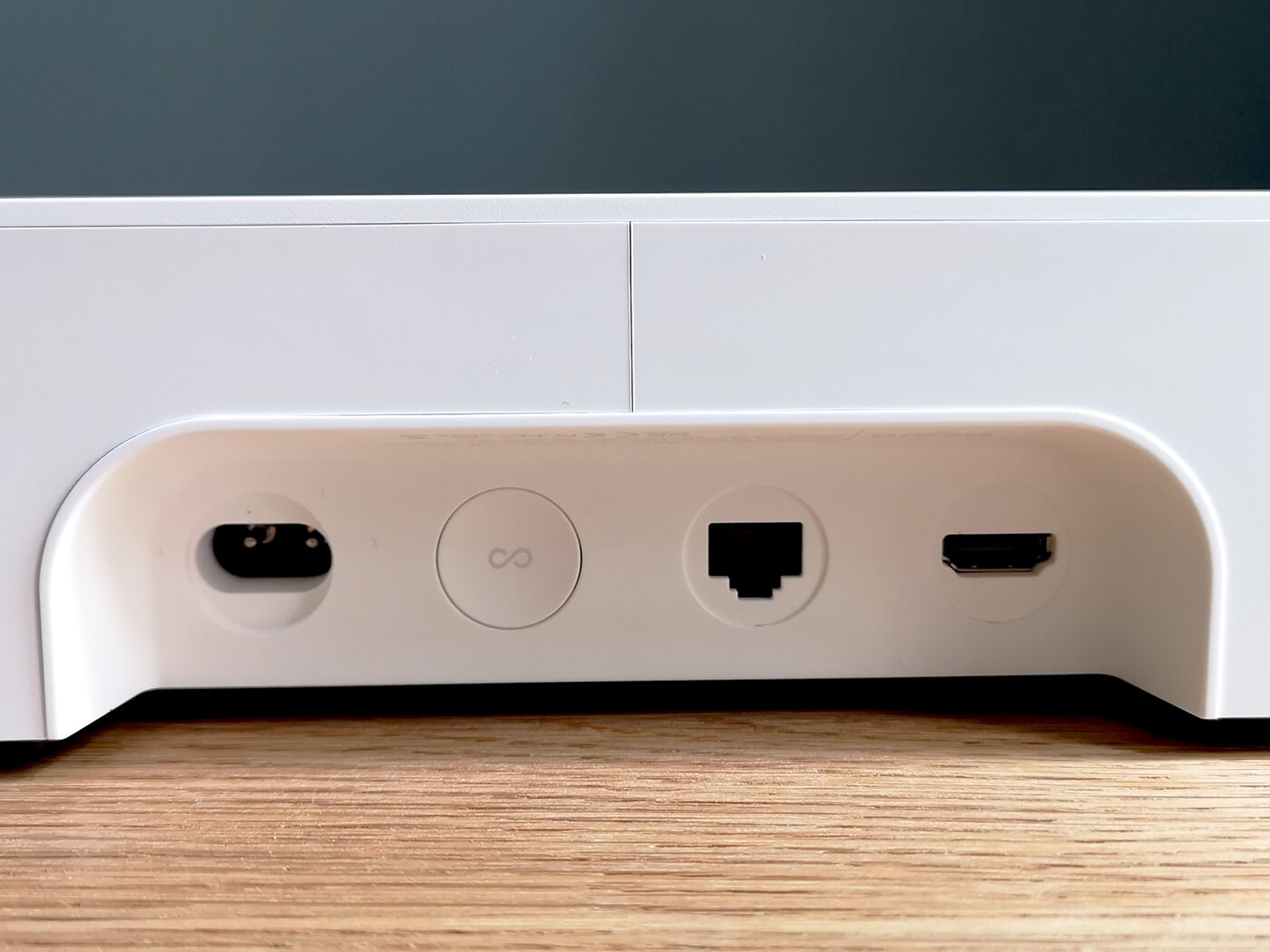 The sound quality of the Sonos Beam Gen 2 is excellent, especially considering its size. It has the ability to project sound higher than you might think, given the absence of any upward-firing speakers, and likewise, the low-end tones are better than you might expect from such a small soundbar.

It’s not without its limitations, though. Understandably, as it’s almost half the size of the Sonos Arc and has fewer drivers, it’s not as good at creating the impression of 3D sound as its larger sibling.

This was noticeable when watching content with a Dolby Atmos soundtrack. I watched the same 4K remaster of Crouching Tiger, Hidden Dragon, which I used to test out the Sonos Arc.

The placement of sound objects was still very good. The fight scenes in particular sounded fantastic – punches, slaps, sword slashes and bones breaking were given extra impact by virtue of how the sounds were placed. 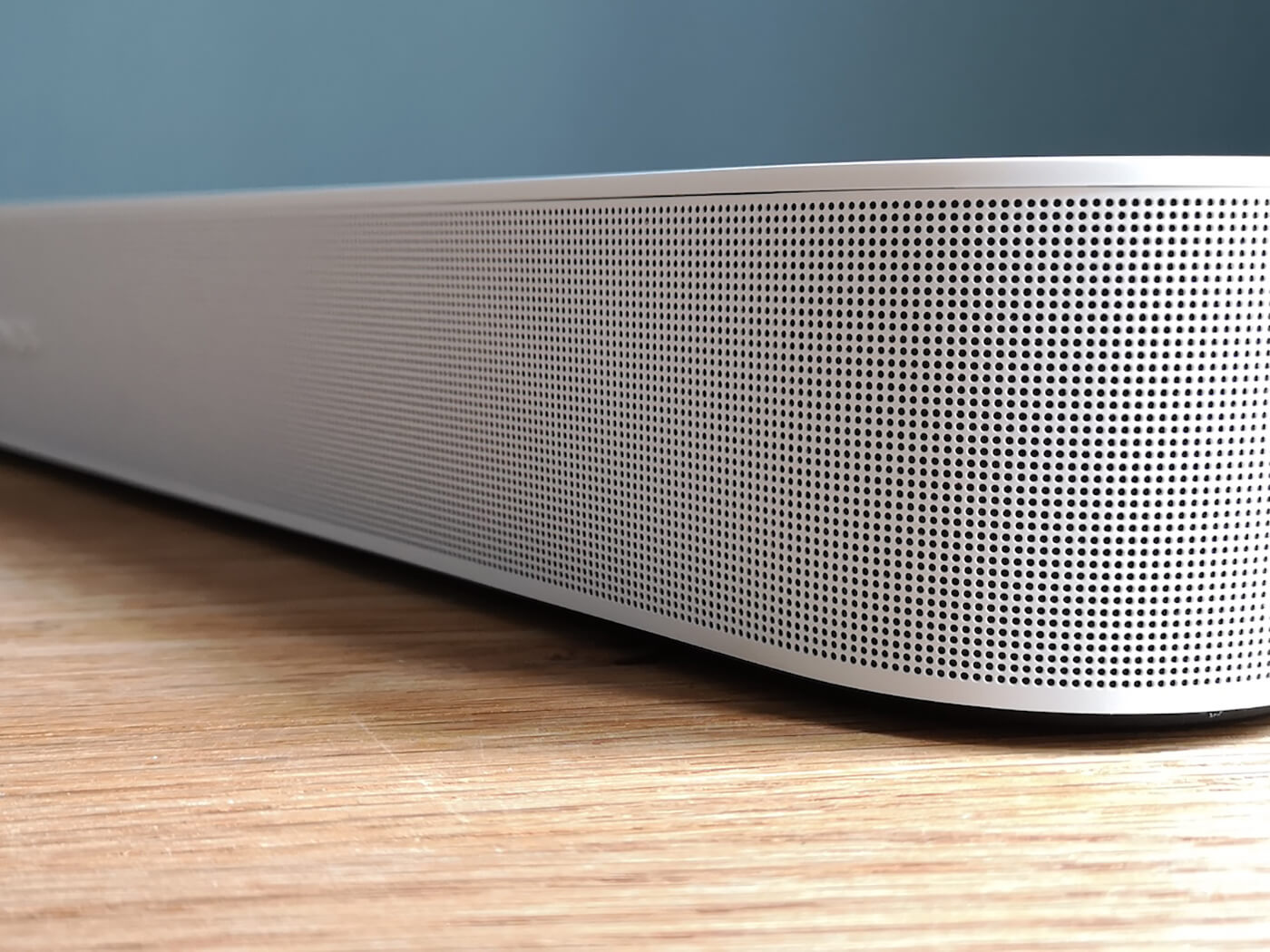 Fortunately, these shortcomings can be addressed with the addition of more speakers (and more money), so it is possible for the Sonos Beam Gen 2 to sit at the heart of a home cinema setup.

Likewise, for music playback, the Sonos Beam Gen 2 is a powerful speaker in its own right. Bass response, again, was great. The low tones of Massive Attack’s Angel sounded rich and full, while the bassline of Dead Prez’s Hip-Hop had a lot of definition even at high volume, with the bass on full.

It’s good at maintaining definition during transition from quiet to loud parts on both of these tracks, with Angel growing in intensity, and Hip-Hop featuring dropouts in its otherwise relentless bass assault. 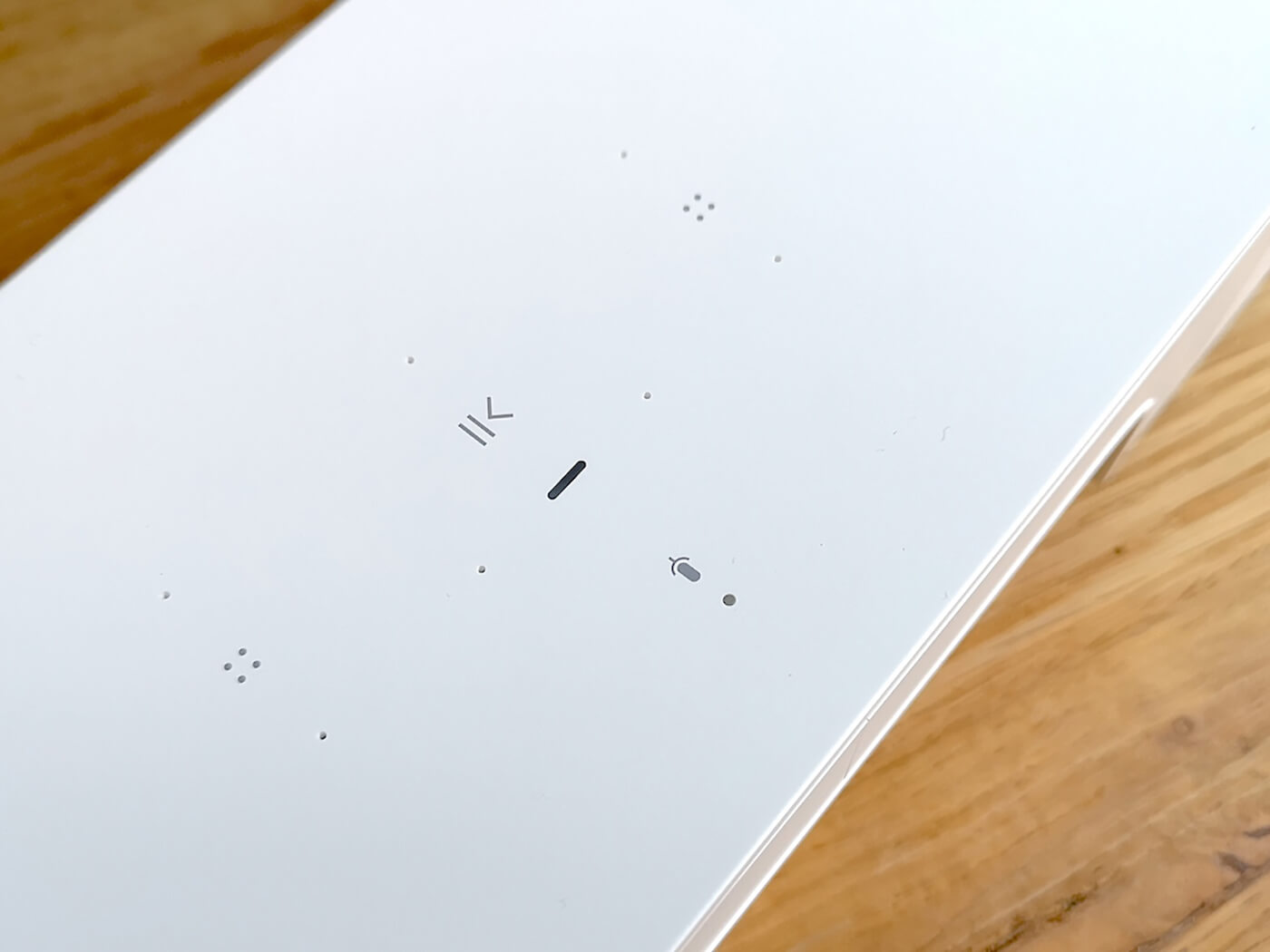 Quieter acoustic guitar tracks were also nicely detailed through the Beam Gen 2, with Nick Drake’s voice and guitar playing on Things Behind The Sun benefitting from definite separation. There’s a moment at 2:01 when one of the guitar strings rattles. Little details like that, and the sound of Steve Howe’s fingers sweeping the strings on Mood For A Day really stood out.

Dave Brubeck’s Take Five also sounded beautiful through the Beam Gen 2, with little details like bending bass strings noticeable at low volumes, and distortion only apparent on the heavier moments of that track with the volume high, and the bass and treble boosted.

The Sonos Beam Gen 2 is a really fantastic soundbar, better than a soundbar of this size has any right to be. For $/£449.99, it’s competitively priced too – it will appeal to people strapped for space but who want to get the best sound they can without having to fork out more for a bigger soundbar or extra speakers. 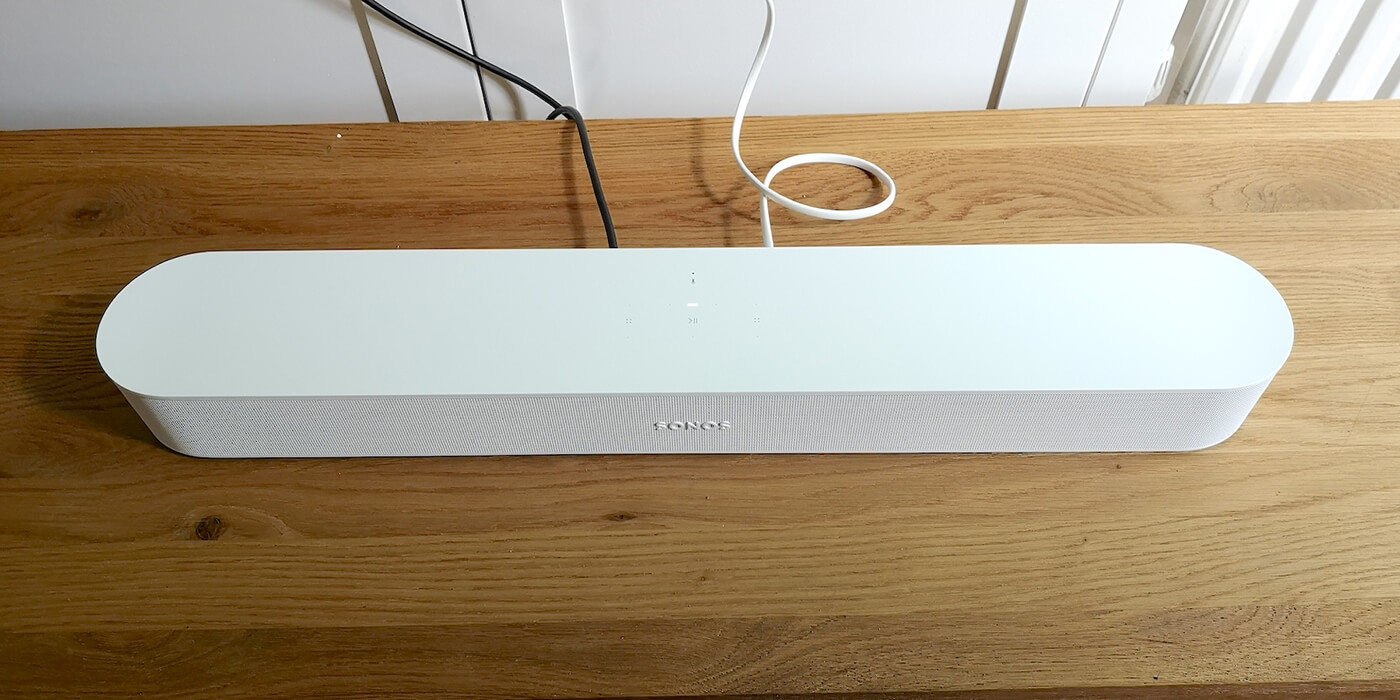