Denon Home Sound Bar 550 review: A semblance of a surround sound experience at an appealing price 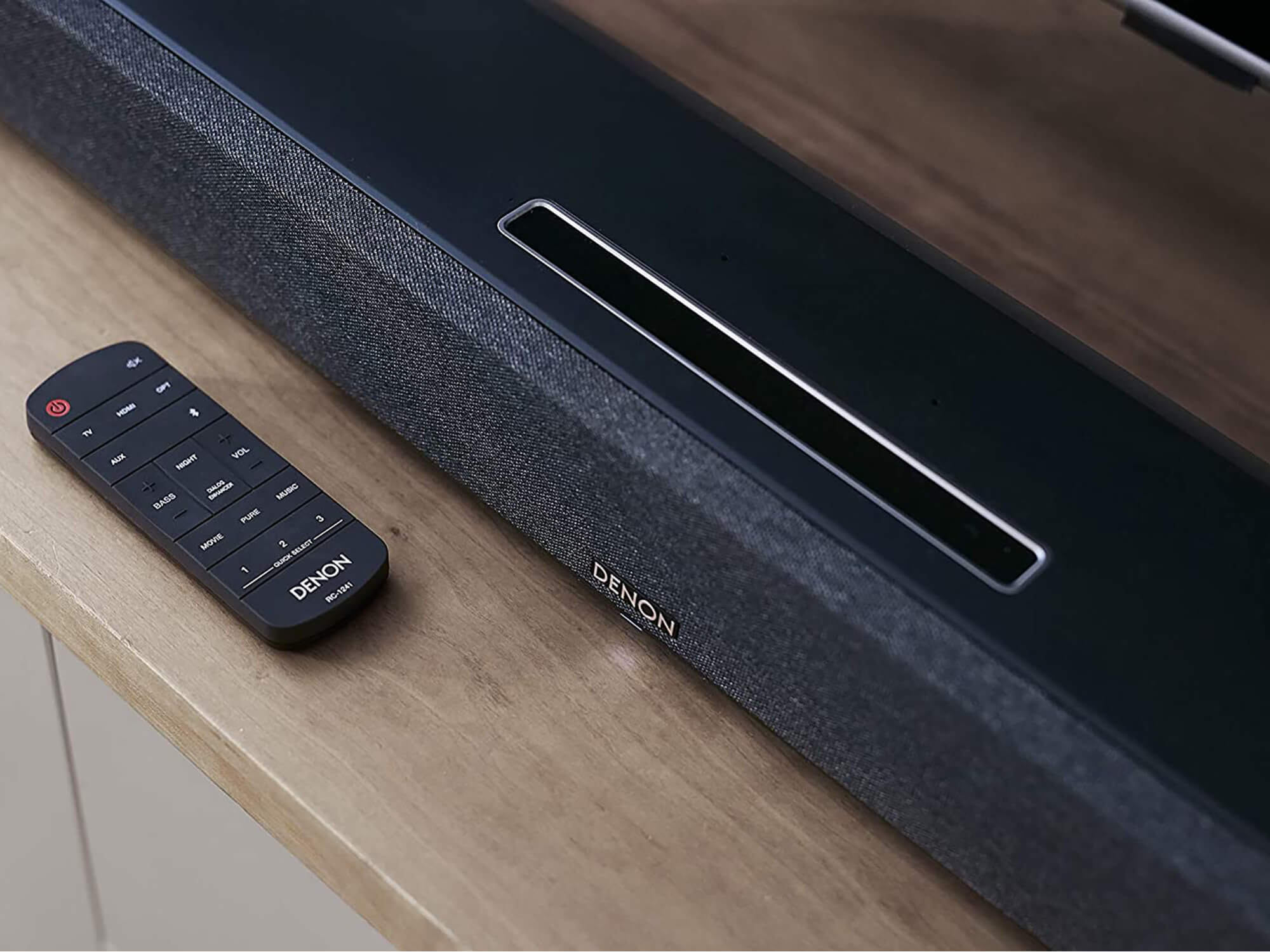 ⊕ Compact, space-friendly, and very loud
⊕ Mostly enjoyable for playing music
⊕ Can be paired with wireless side speakers and a subwoofer
⊕ Easy to configure and control with the HEOS app


The Denon Home Sound Bar 550 is a mid-range soundbar that supports 3D surround sound standards. Amazon Alexa support is included, so it can be paired with other smart home devices or controlled with your voice instead of a remote or app. The Denon HEOS app lets you integrate the 550 into a wireless surround sound and/or multi-room systems, plus stream content from services such as Spotify, Tidal, Amazon Music HD and others over wifi instead of Bluetooth.

While you won’t necessarily appreciate the impact of Dolby Atmos and DTS:X support without extra speakers, there’s an upgrade path here. The launch price was $650/£600, but it’s now possible to find the Denon Home Sound Bar 550 for around $/£450.

Like the Polk React and the Sonos Beam gen 2, the Denon Home Sound Bar 550 is compact and should be able to comfortably sit underneath or in front of most TVs, plus it can be wall-mounted. As there are no upward-firing speakers, you’re not so constrained in terms of where you can put it.

The 550’s speakers are hidden behind a fabric mesh that wraps around the front, sides and rear. Motion-activated controls for media play and the Alexa far-field mic blossom into life when you wave your hand over the top.

All of the physical connections are hidden around the back, along with buttons for wifi and Bluetooth pairing.

Setting up the Denon Home Sound Bar 550 is easy. You can connect it to your TV’s HDMI ARC port for a quick plug-and-play setup and there’s an optical audio connection if you have an older TV. Handily, Denon includes HDMI and optical cables in the box should you need them.

To fully unlock the 550’s potential, you need to install the Denon HEOS mobile app (iOS, Android) and have either your home network’s password or an ethernet cable to hand to connect to your router and unlock services such as Alexa and Spotify.

The HEOS app is a breeze to navigate. Three tabs at the bottom of the interface let you quickly skip between your Rooms (if you’ve got multiple Denon speakers dotted around your home), Music (select from streaming services and your own locally-stored files) and dive into the settings of the Denon Home Sound Bar 550.

From here, you can pick from preset sound modes including soundbar standards like Night mode, which reduces bass, and Dialogue Enhancer, which boosts speech. Dialogue Enhancer features three levels, labelled Low, Medium, and High. Those who struggle to make out speech will appreciate the extra firepower. There’s also a virtual EQ that lets you raise or lower treble and bass.

There are modes for Dolby Surround, DTS Virtual X, and a Movie mode, all of which strive to create wider, more enveloping sound stages, while a Pure mode provides a straightforward mix.

Most of these features and settings can be accessed using the supplied remote, but the HEOS app offers greater control and is generally more convenient. Unfortunately, whenever you jump between modes about a second of silence as the device shifts gears, which makes finding the perfect balance tricky.

On the whole, the 550 boasts ample clarity, provided that you don’t push the volume too high. If you’re only sat a few metres away, you’ll probably be happy with the volume set somewhere between 20 and 30 per cent. At higher volumes, there’s a noticeable tradeoff in terms of balance, with dialogue in particular suffering.

Like the Sonos Beam gen 2, the 550 has the ability to generate a taller soundstage than you might expect. Bombastic moments like fight scenes sounded wonderfully immersive, with the sounds of splintering wood and clanging weapons leaping up and out to the sides, but speech felt muted. It did a valiant job of making the high octane moments of Jumanji: The Next Level leap out, minus the noticeable bass thump of larger, more expensive soundbars.

Without any side speakers, like the Denon Home 150, Home 250, and Home 350 or a Denon DSW-1H subwoofer to hand, we can’t comment on how well the Home Sound Bar 550 performs as part of a larger Denon system. This also means we can’t share how streamed 5.1 content on Netflix sounds, but we are nonetheless impressed with the soundtrack defaulting to two channels. The Power Of The Dog sounded excellent; there’s a scene early on where cattle are being driven right to left across the frame which sounded particularly pleasing, with rumbles across the soundstage.

It’s equally adept at tearing the roof off at parties, and for listening to music on your own. There was good separation between bass and drums on Dead Prez’s Hip-Hop, at volumes beyond 50 per cent, and with the bass level pushed to the max on the EQ. There were no sudden drops in overall volume during that track’s dropouts, demonstrating a wide dynamic range.

There was a lot of separation between all the instruments on Dave Brubeck’s Take Five too, but above 50 per cent volume, it was physically painful to listen to. While details like string bends and snare rolls retained much of their clarity, you won’t be able to hear your housemates yelling at you to turn it down.

By contrast, Steve Howe’s Mood For A Day sounded oddly quiet, requiring the volume to be raised to pick out some of the finer details of that solo acoustic piece. The bassline of I Didn’t Change My Number by Billie Eilish also had a lot of bounce in the mix, especially the low vocal, which was presented well. Both of these tracks retained a detail beyond 50 per cent volume.

The 550 is similar to the Polk React in terms of it being a small-but-loud soundbar, and the fact that it can fly solo or work as the cornerstone of a larger multi-room sound system.