Plugins I Actually Use: BOY SODA 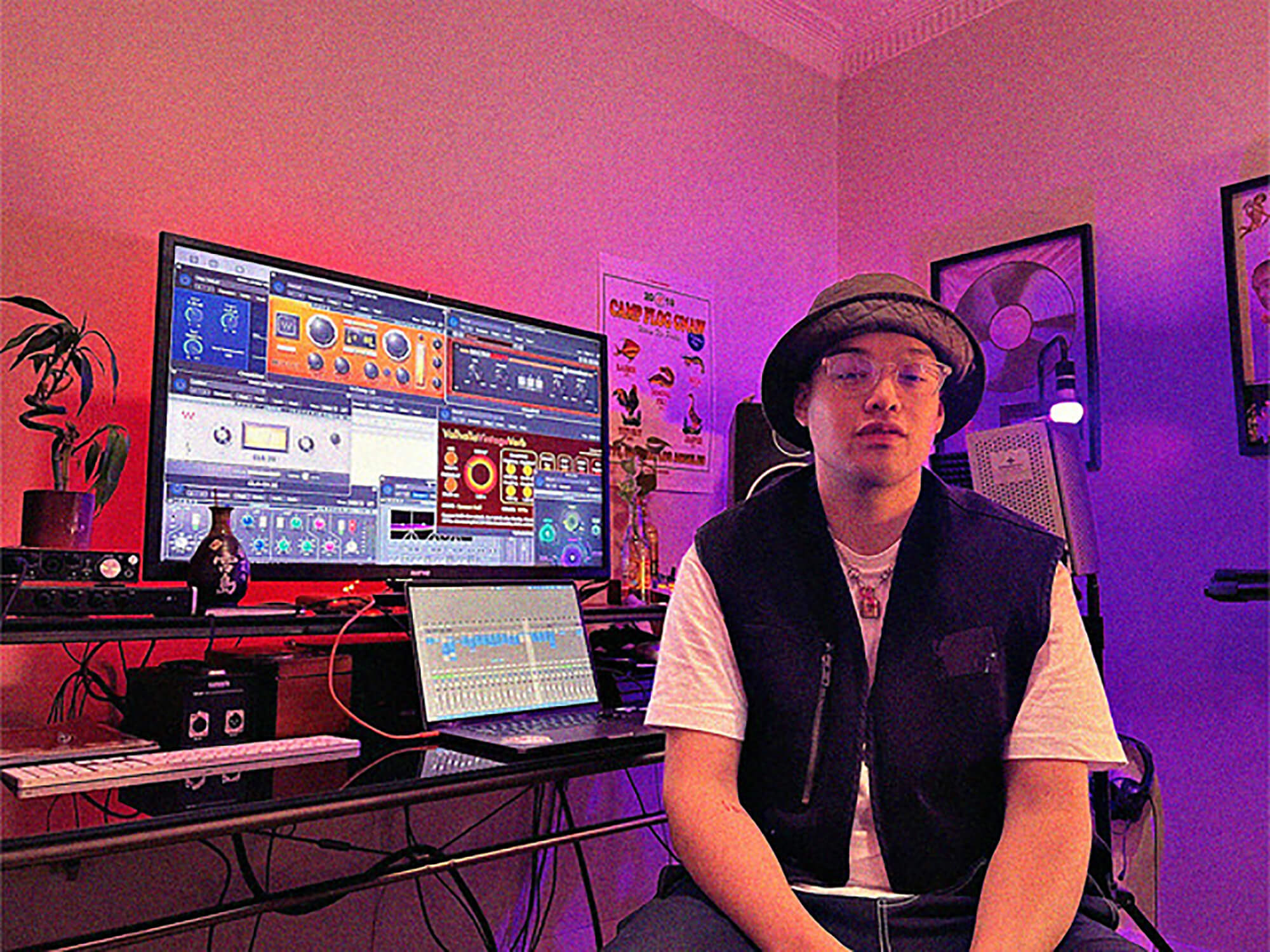 BOY SODA is a Sydney-based singer-songwriter that handles himself equally well producing a track as he does behind a mic. For fans of Rex Orange County, Anderson Paak or Frank Ocean, the musician effortlessly slips from zany, conversational rap to heart-melting vocals, gliding over loose lo-fi hip hop drum breaks glued together by funky basslines.

He’s been on a roll this year, having released some huge work like his phenomenal track, BIG, then a 6 track EP called THE DISTANCE BETWEEN THINKING AND FEELING. Recently, BOY SODA’s taken a tangent into trap with his track WILLY SHAKESPEARE. Before that, however, he released LEMONADE, an infectious track made with producer Taka Perry.

We find out more about how BOY SODA uses plugins to create LEMONADE and other music.

BOY SODA – hey! Nice work on your track, LEMONADE. This track feels bigger, more boisterous than some of your previous songs. What was the feeling in the studio when you were making this?

Making the song with Taka Perry was a fun and easy session. We tried a different idea originally but we banked it and started making LEMONADE. I think that speaks to Taka and I’s awareness of the process and following ideas that flow and allowing other ideas – that may be inhibiting the ability to make good art – to be let go. The song feels so high-energy and I think that’s a result of us enjoying the time spent making it.

Is your setup all in the DAW or do instruments/hardware feature at any point?

I mostly work out of the box but I’m fortunate enough to live with my MD who owns a Roland Juno and a Moog Sub Phatty so I steal them often! I think in terms of workflow, VSTs and software emulations of outboard gear are way easier to actualise an idea the second it comes to your brain. You’re not slowed down by having to patch anything.

I actually haven’t bought any for a while but I have always been addicted to Microshifter by Soundtoys. It sounds great on backing vocals, or following effects because it spreads so beautifully following a verb, and on backing vocals I just love hearing them with that really wide stereo image.

Like all of Soundtoys’s plugins, its interface is super easy and intuitive. I think Soundtoys is a staple in a lot of studios and it’s because they’re easy and sound incredible. 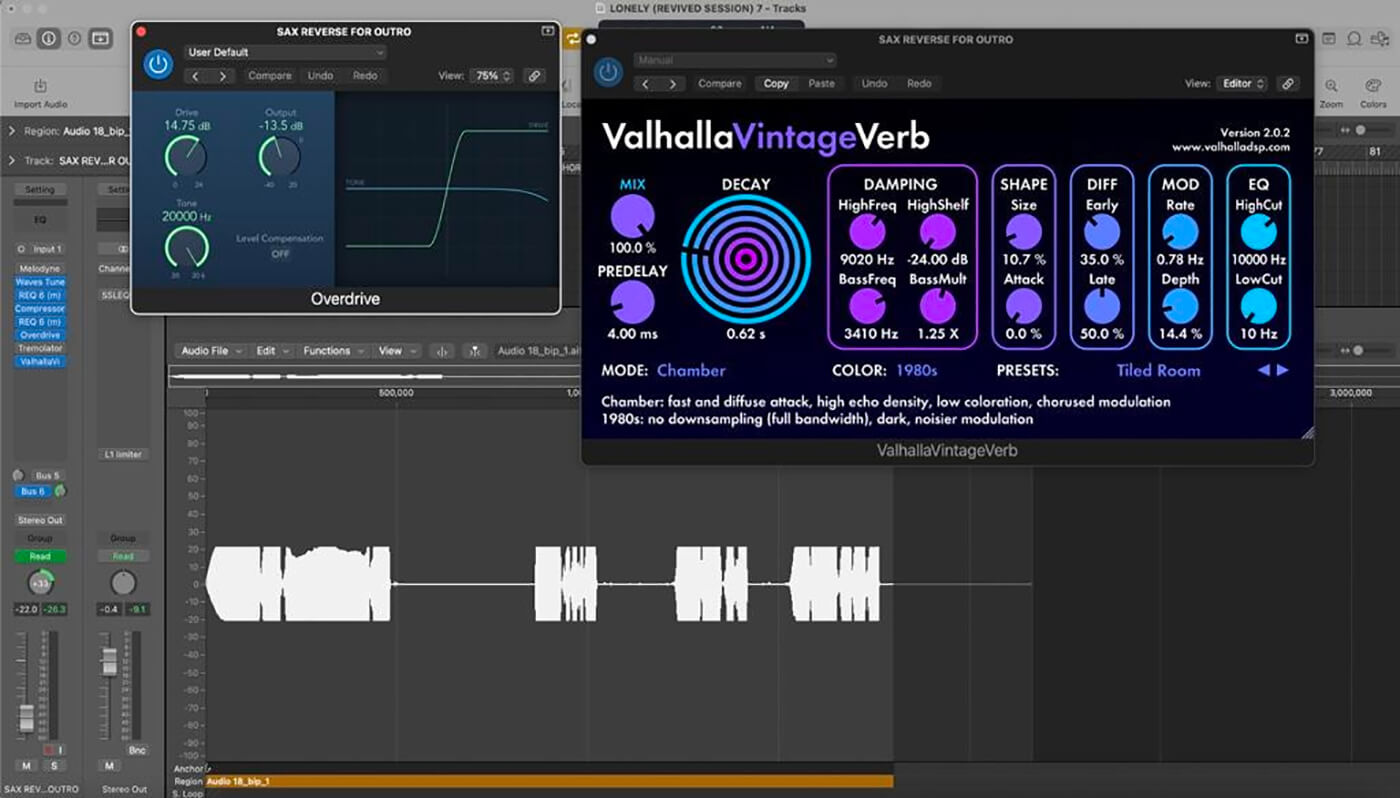 This might be cliche but I actually love the Space Designer stock plugin in Apple Logic Pro. It has lots of amazing short room sounds so I tend to gravitate towards that and lean on Valhalla for longer reverbs because it has that sexy downsampling 70’s mode.

Infected Mushroom’s Waves is a go-to for me. When sharing music with my peers and people whose opinions I value highly, it allows them to have an idea of what the finished product feels like. 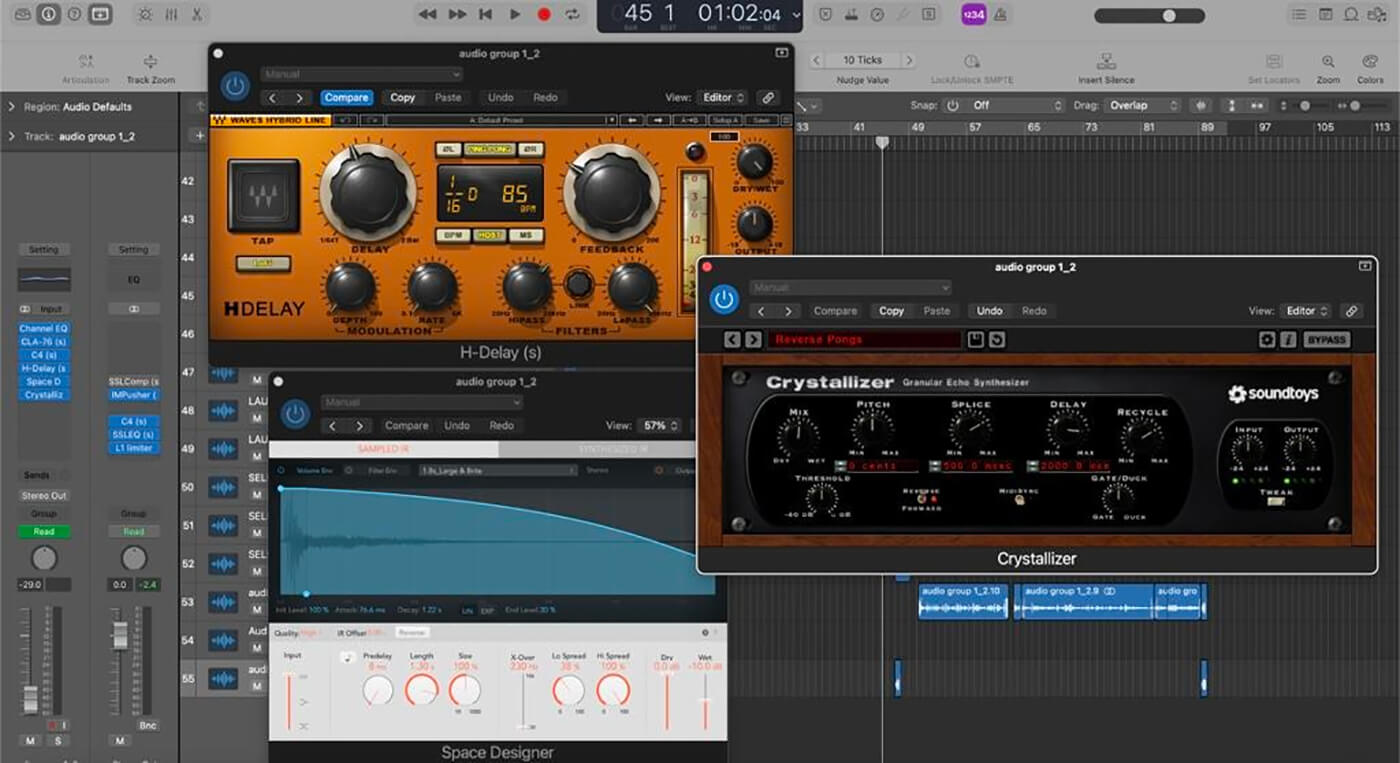 That’s probably Melodyne by Celemony. I like to be meticulous in the recording process and love having the flexibility and freedom to pull notes into line, create new melodies/harmonies etc. It allows me to explore vocal delivery in realistic and unrealistic ways. I’ve used Logic flex pitch and the waves version and I’ll always prefer Melodyne.

Logic Overdrive distortion. When something I’ve produced or sung sounds really bad, I put it through the stock wah wah pedal with the overdrive on top. It’s a band-aid fix but it’s all over my last EP because I’ll always have a soft spot for this bad producer habit. 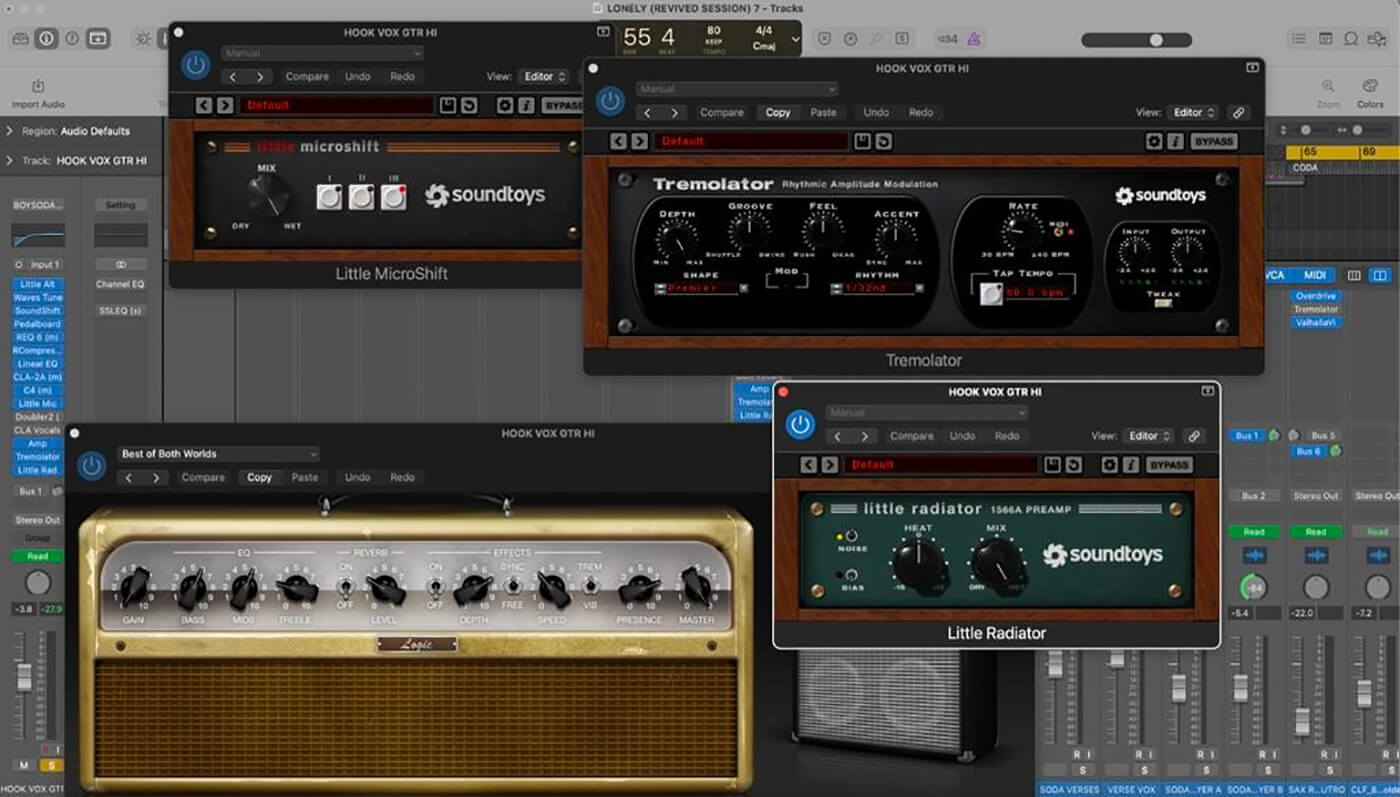 I usually have Infected Mushroom or the SSL compressor from Waves, an SSL EQ, and a limiter. Sometimes a dual mono EQ or the Waves C4 multiband as well. I usually mix as I go, but generally, I’m not a fan of the mixing process so I’m so happy to have someone like Cam Parkins, who mixed a lot of my last EP, to deliver an incredible mix so that I can keep making more music while that’s happening.

What plugin would your EP THE DISTANCE BETWEEN THINKING AND FEELING be incomplete without?

We used the Roland Juno and fell in love with the brass patches, strings and sine leads. It’s in the cinematic, orchestral part in the TWENTYOH5 and the big brass section that concludes LONELY. I used the real thing but I know there are a lot of amazing VST versions so i’ll definitely be using that if I just need to work in the box.

In LEMONADE, we can hear layered vocals. Can you talk us through the vocal processing in LEMONADE? Is that a technique you apply to most of your vocals?

I have to give full credit to Taka and Liam Quinn for the engineering and mixing on these but I’m very comfortable tracking my own vox and prefer to usually! I love how saturated they are in LEMONADE, especially the lead vocal.

In the response, crowd vocals singing ‘lemonaaaade’ there’s a mix of doubles, formant doubles (Soundtonics Alter Boy) and crowd vocals of Taka and I singing together. Giving a real mix of voicings and tones really elevated the texture of that group and also makes it feel more chanty in the way that other people know to sing that response when they hear it. 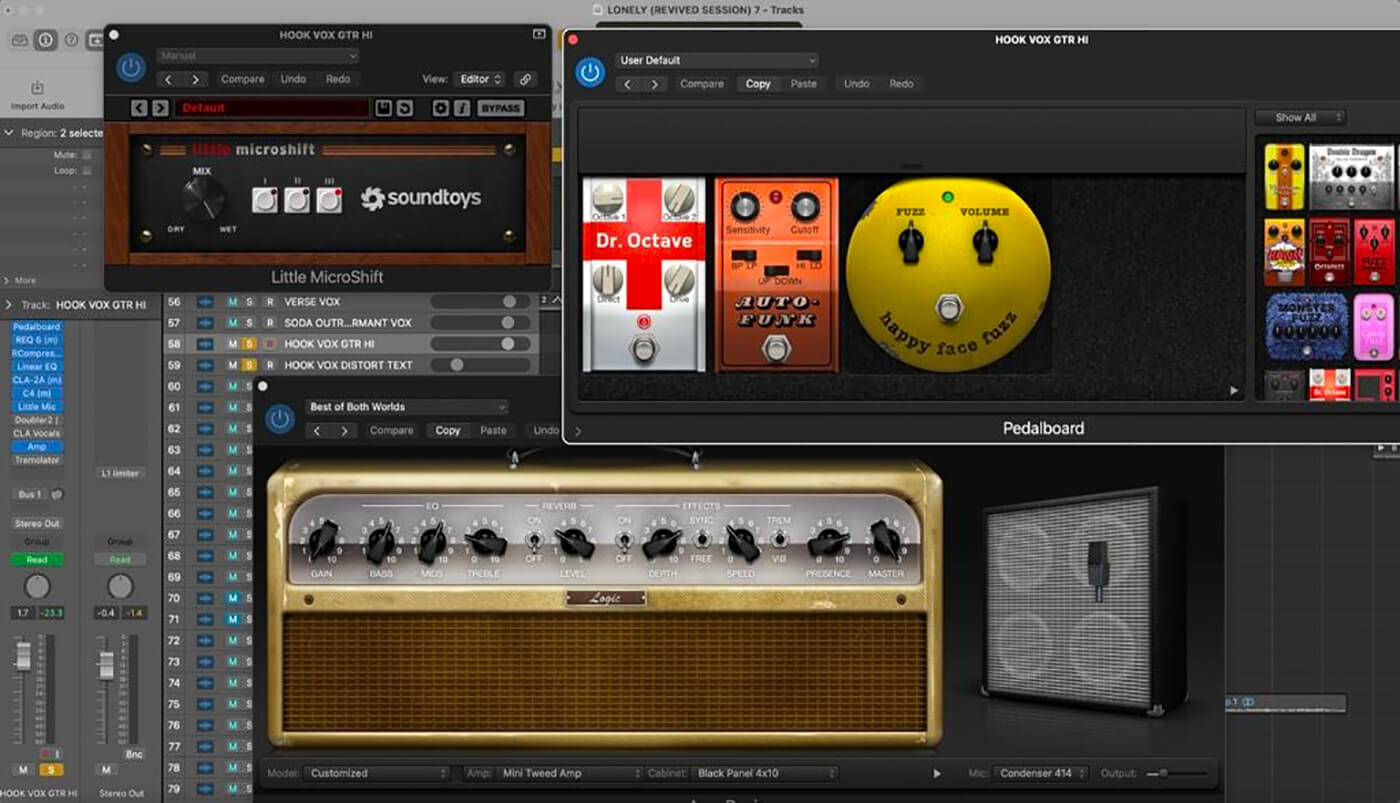 How do you sequence drum patterns? Is there an essential plugin you use on drums?

The new Logic One sampler has been really fun and intuitive to use – I definitely prefer it to the EXS24 they originally had. Future Audio Workshop’s Sublab is always really reliable too and Kontakt is obviously a must-have!

I love the Soundtoys Little Radiator! Adding a little bit of tube warmth with this is a sound I really love and It feels great on everything and anything. 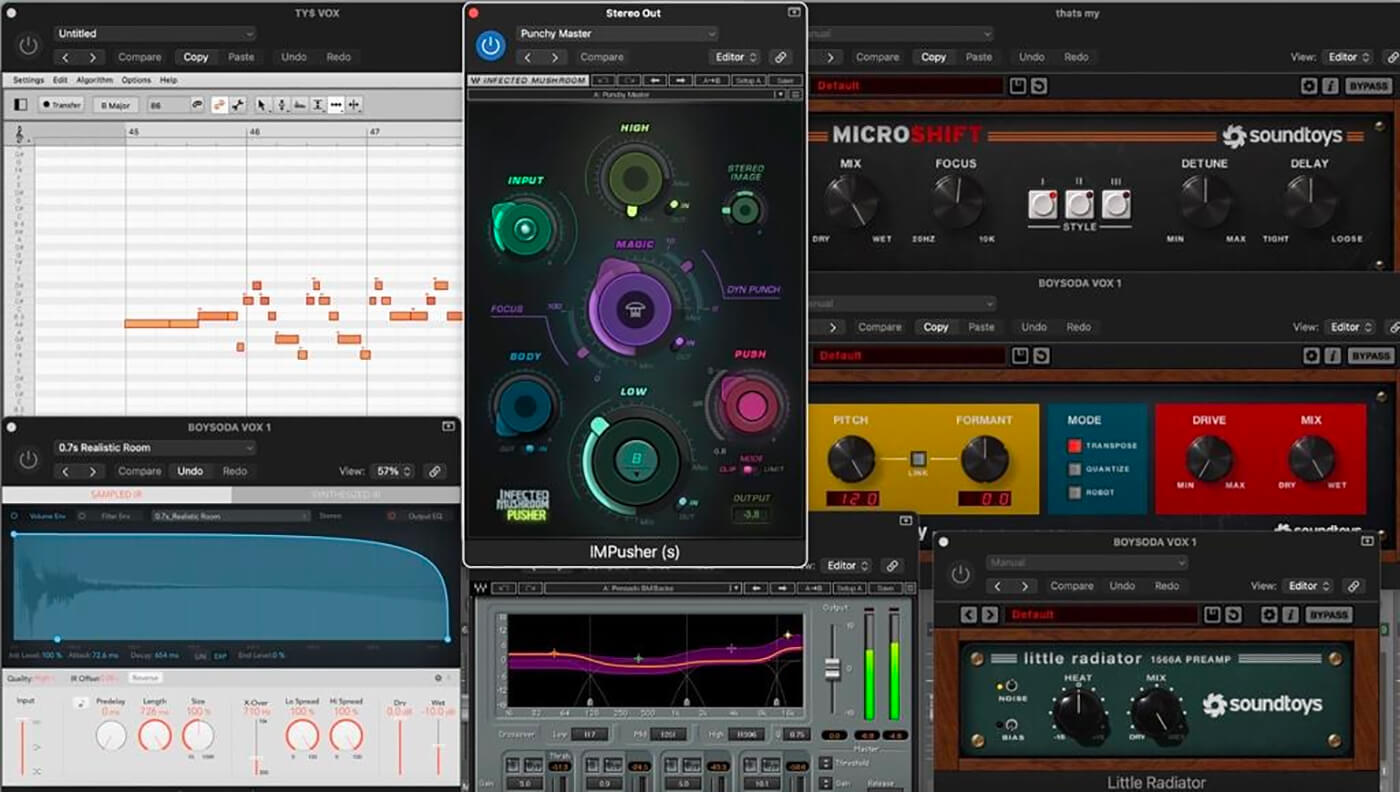 CLA-VOCALS. I feel like there’s a love-hate relationship with this plugin and some people are against it but for workflow, it’s great to have something so immediate and easy to use. Sometimes the simple plugins that have a lot going on in the background do a lot of the heavy lifting so that I can keep up with the ideas in my head and execute them before I lose them again.

Anything guitar related is a bit foreign to me when it comes to processing and effects because I don’t play. I’m often playing around with weird and unconventional pedal combinations or amp sounds in the stock Logic amp/pedal boards.

I think knowing less about how they would traditionally be processed means I run into cool and happy accidents in the production process.

LEMONADE by BOY SODA is available to stream on Spotify.