Back in the early 80s, synths were still an expensive business. Then Roland came along with the legendary Roland Juno Series. Dave Gale powers one up, with fond affection… In my youthful years (the summer of 1982 to be precise and now a somewhat distant memory), I managed to pick up a catalogue by Roland, […] 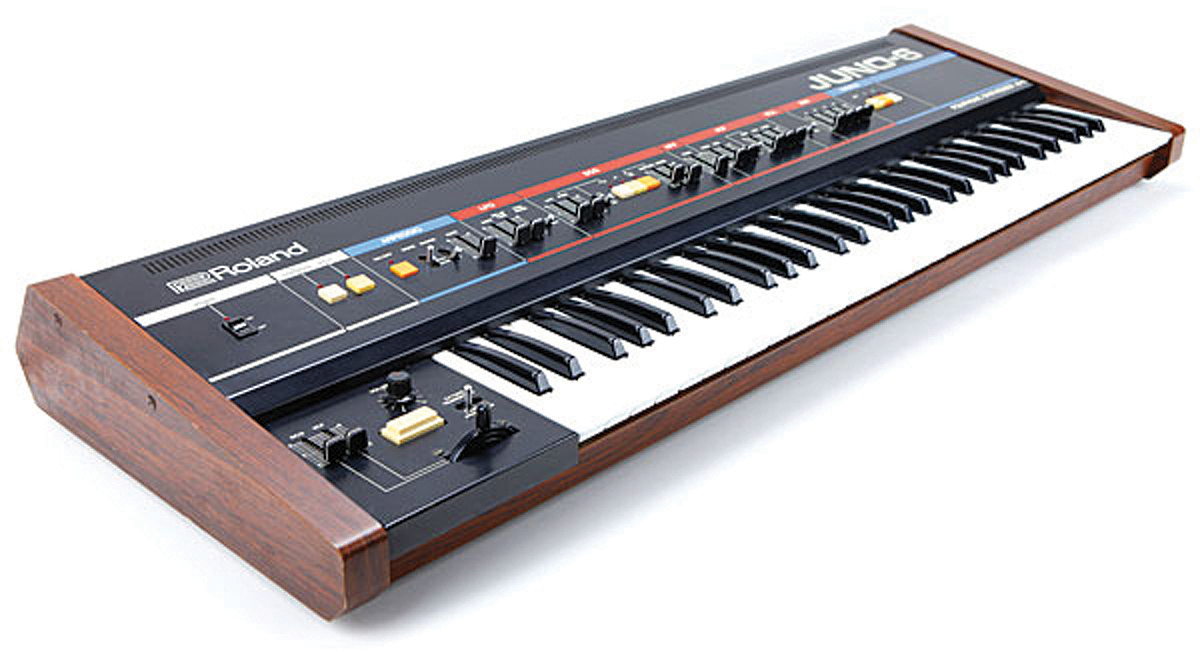 Back in the early 80s, synths were still an expensive business. Then Roland came along with the legendary Roland Juno Series. Dave Gale powers one up, with fond affection…

In my youthful years (the summer of 1982 to be precise and now a somewhat distant memory), I managed to pick up a catalogue by Roland, and would scan the pages from cover to cover, as I listened to the bands of the day, with ever-growing envy. Having moved past the pages containing the completely unaffordable Roland products (the like of which appear to be less affordable, even today), I stumbled across the Juno 6, firmly residing in the more affordable section of the catalogue.

Around the same time, I attended a music holiday course, run by a teacher friend of mine, and as I arrived, I saw a Juno 6 in the flesh, in all its glory – and what’s more, the offer of taking it home at the end of the course, for the remainder of the school holiday. This turned out to be a very formative time for me; think pre-internet, when it was rather more difficult to get relevant information about such things.

Despite this, within a day or two I had the Juno 6 covered, and this was not because I was some form of synth whizz kid, but largely due to the spectacular simplicity of the layout and design… which in no way diminished the raw power available.

So let’s start at the beginning of the signal path, with a DCO (Digitally Controlled Oscillator). “Why a DCO?” I hear the analogue aficionados cry. Well, it’s not really a DCO in the traditional sense of being a true digital oscillator. It was, in fact, very analogue, and thanks to developments in the technology, it was really a VCO which was very firmly under digital control, but nonetheless the Roland fascia described it as a DCO. The plus side of this was that the tuning was incredibly stable. All six voices would stay firmly in tune, and then there was the sound!

Three press-button switches would activate Saw Tooth, Square Wave and the Square Sub Oscillator, the latter having its own dedicated long-throw fader. Obviously, as an inexperienced teenager, the only thing to do was push all three buttons down and make it sound as huge as possible – some might say ‘phat’, but I’m pretty sure that word hadn’t been invented by then (in fact, it might have been the Juno that brought this word into being).

This was also in no small part due to the addition of two chorus types, available at the end of the signal chain, which would beef up the single-oscillator-per-voice architecture. No surprise, then, that the reputation for beautiful string timbre is so legendary amongst Juno owners.

The New Kids on the Block

It would be impossible to talk about all of these wonderful vintage Junos without mentioning the new kids, in the shape of the Roland Boutique range. While these were a limited run, all three machines (based on the Jupiter 8, Juno 106 and JX3P) have been met with great acclaim, shadowed only by the form factor and size of faders.

However, if you do have a vintage 6 or 60, the clever guys at tubbutec.de have an excellent retrofit which can be applied, to turn your old machine into a Juno 66. I recently saw this in action at the Superbooth16 event, and was delighted and surprised at the additional functionality which this could offer, which included MIDI, onboard sequencer, mono/poly modes, more LFO modes, and lots more. Definitely something to consider if you want to give your Juno 6 or 60 a new lease of life. 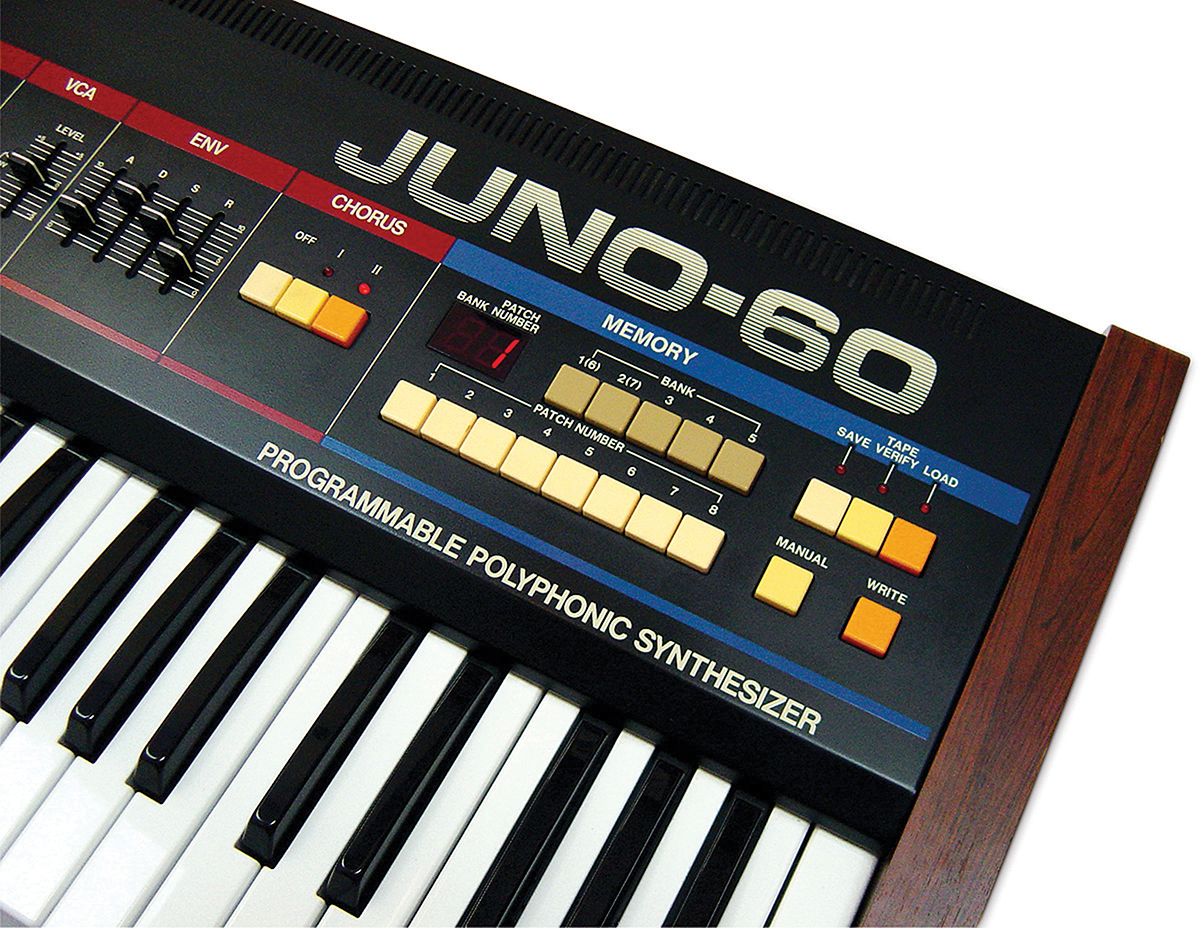 Next Stop, The Roland Juno Series ‘ Filters and Gates…

And so the signal path continues, as is so clearly laid out on the beautiful front fascia, in the direction of the filter, or two filters to be precise. Not content with offering a single 24dB low pass filter, Roland also included a high pass filter, which was to be exceptionally useful for resonant bell tones and HPF bass sounds. The LPF was not the most violent of filters, with quite a distinctive and pleasant timbre, but would self-oscillate if pushed, which is always a useful trick to have up your sleeve.

We move to the envelope section, which consisted of a single ADSR envelope, with the option to send the amplitude (VCA) to a gate; a simple affair, literally akin to a light switch – on and off. The ADSR was punchy, with reasonably long tails of around seven seconds on the decay and release phases, which proved incredibly smooth, if pointed in the direction of the filter. Also available was the Low Frequency Oscillator section, with both manual and automatic assignment, and here I have to mention my favoured layout of manual LFO triggers. The pitch lever resides firmly left of the keyboard, with the glorious white and chunky LFO trigger right next to it.

Beautifully ergonomic, with the sort of positive response that every synth player yearns for. I was saddened when the design was replaced by the forward-tilting pitch lever design that came later in Roland’s product design, and the Juno 106. 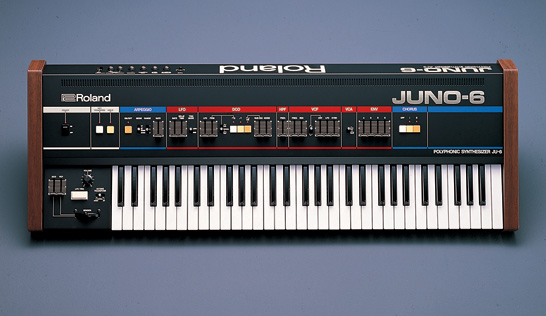 Of course, having forked out the reasonable amount for the Juno, the chances are you might have a sequencer on the agenda. Regrettably, this wasn’t much of a prospect for the Juno 6, due to its lack of data connectivity (MIDI was still a glimmer in Dave Smith’s eye), but the one thing that was included was an arpeggiator, and oh my, the fun you could have with that. It went up, down and both. The octave-jump basslines that I could play with one finger, leaving the heavy duties to the Juno, would allow for hours of escapism, but then they were very different times.

What’s curious about the Juno 6 is that it was very quickly joined by the Juno 60, some six months later. It was largely identical in design, but with a few additions which made the 60 so much more desirable. This ‘call to arms’ by Roland was in no small part thanks to the appearance of keyboards from other companies, offering functionality that the Juno 6 didn’t have. So the Juno 60 added a nice bank of 56 programmable memories in non-volatile RAM, which would be vital for any gigging keyboard player.

While the experimentation of a memoryless keyboard was wonderful for studio use, it rather left the Juno 6 behind. The other huge selling point for the 60 was the addition of Roland’s very own Digital Communication Bus (DCB), which immediately gave connectivity to other devices with the same protocol. Admittedly, this was only to other Roland products, but sequencers and interfaces also appeared with this protocol, giving the option to record in a MIDI-like fashion.

The reign of the Juno 6 ran until 1984, while the Juno 60 ran on a shade longer, until the Juno 106 made a huge entrance to the market, in 1985. Armed with another new protocol called MIDI (and ditching DCB), the 106 would be a huge hit with anyone wishing to take advantage of this new-fangled socket. But the biggest and saddest news from my perspective was the disappearance of the arpeggiator, but the appearance of portamento. Don’t get me wrong, I love a bit of gliding around on a polysynth, but my fondness for the arpeggiator is such that in my view, it was removed at just the wrong point. Clocking the arpeggiator via MIDI would have been a very useful thing indeed, and I think Roland missed a trick here. 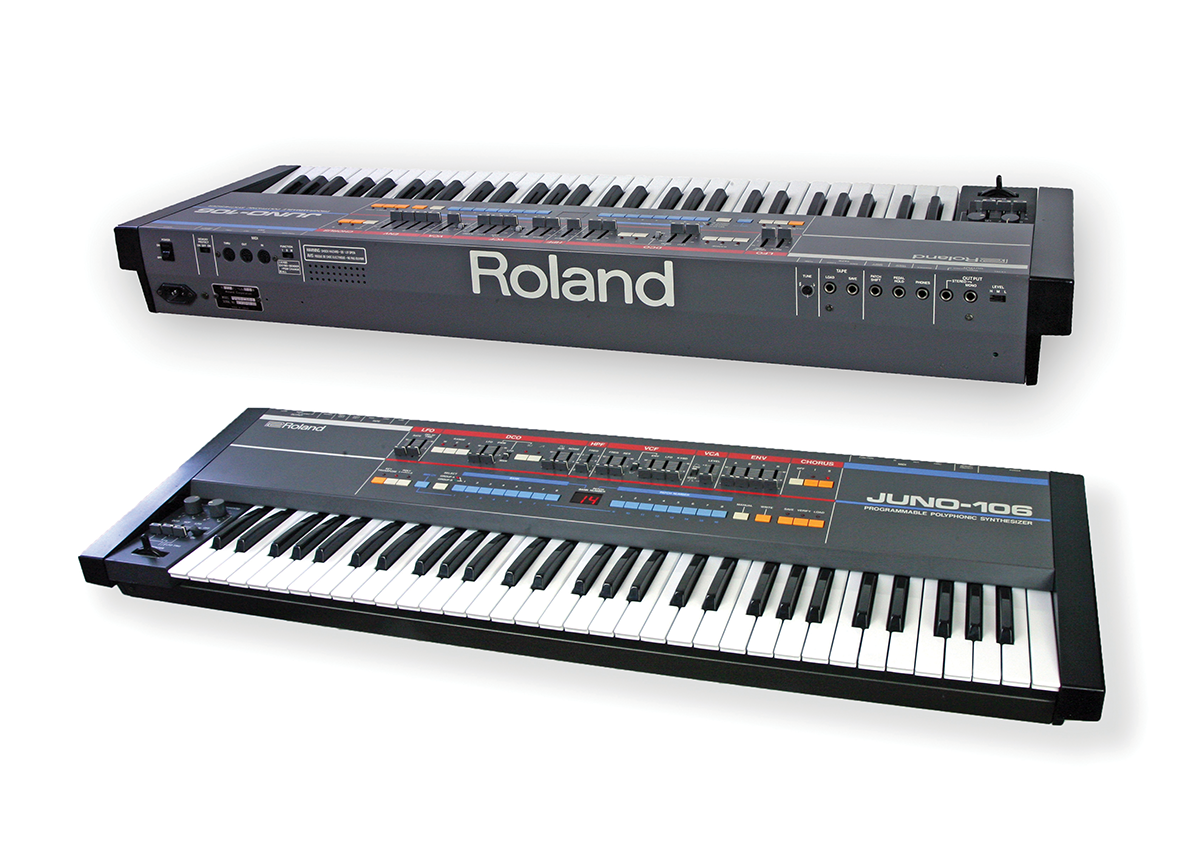 I have to also mention that the 106 got a major restyling. While the fascia remained very similar, with a slight lightening of colour, the faux-wooden end cheeks were replaced by sleek plastic wedges. Roland, as anyone from that era knows, ‘designed the future’, and clearly the plastic wedges were very ‘tail end 80s’ in design.

While the architecture of the 106 was largely the same, for many, the 106 didn’t sound quite as nice as the 6 or 60. Clearly, this is all down to personal preference, and the 106 is not exactly lacking. There was an upping of memory locations to a whopping 128, so as with all progress, there are swings and roundabouts. The MIDI was, of course, the big selling point, albeit in an early and basic incarnation, but it works well, as long as you don’t expect too much additional functionality.

Back in the day, the main competitor to the Juno came from Korg, who were offering a similar machine called the Polysix. Not surprisingly, the Polysix offered a very similar architecture; however, the oscillators were deemed preferable by many.

Korg sneakily also introduced a price drop, during the reign of the Juno, putting Roland under pressure to do the same. Many believe that the Juno 60’s swift appearance on the coat tails of the 6 was largely down to this price-drop pressure, so in many respects, the Korg is the absolute contender if looking for a vintage poly at the lower end of the price bracket.

However, if you feel you simply must have a vintage 106, but don’t feel that your budget can extend that far, consider the HS-60, which was produced as a ‘domestic’ version. It has a sloping panel and inbuilt speakers, and is identical to the 106 except for the lack of Pitch/Mod lever which was removed. It’s practically all of the 106, but normally for far less cash.

My affection for the Juno is long lasting and well grounded, so much so that, despite the appearance of many other fantastic synths in my life, I had a yearning to purchase a 60 a few years back, and I was not disappointed. It’s so capable, and often fits the bill musically even against synths costing much more, which is largely down to the tight Japanese architecture that Roland offered back then.

The original Junos from Roland were class acts, which have deservedly sealed their place in vintage synth history. For my part, I owe them a huge debt, as they offered me the entreé I needed into the world of subtractive synthesis.