by Will Betts
Celemony
#Plugins#Production

The undisputed champion of pitch manipulation gets souped up with sibilance suppression and better automatic pitching, but is it worth the significant outlay? 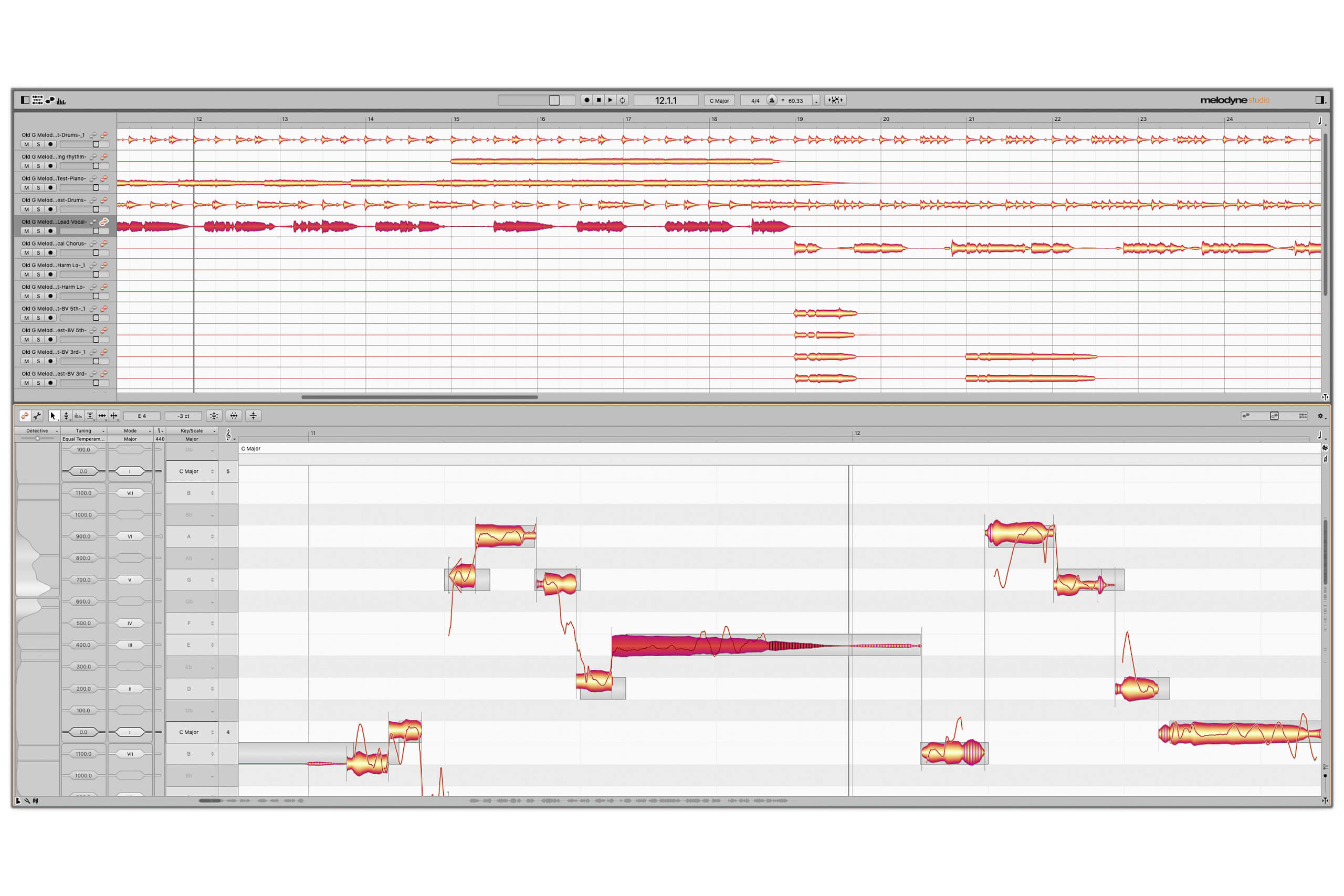 Melodyne is the king of pitch correction. It can be musically transparent when required but also excels in sound design and manipulation thanks to its powerful Direct Note Access technology, which allows you to alter notes within chord in audio files. Since the introduction of this groundbreaking technology in 2009, each Melodyne update has ushered in even more impressive tools for audio manipulation and correction.

The most significant updated feature in the new Melodyne 5 is the Melodic algorithm, with sibilance detection and improved pitch identification to make corrected notes sound more in tune. There’s also a new fade tool that can be used on individual notes within chords, a new levelling macro, chord recognition, and a percussive pitched algorithm.

Sibilance detection is the headline here. In previous versions of Melodyne, the software had no way of determining the difference between sung vowel sounds and consonants. If you wanted to tune a note with a consonant attached, it meant retuning everything, and sometimes the result wouldn’t sound natural. You could get around this by splitting the consonant from the vowel but this was time-consuming. Melodyne 5 now detects this automatically, which that’s important for two reasons.

The first is that you can now see sibilants, whose vertical stripes mark them out from regular notes. If you have a single problematic consonant, you can dial it back with the Sibilant Balance tool, which can also tackle all your sibilants in one go. As if by magic, as you drop its level, the Balance tool will only reduce the sibilants, leaving you with cleaner vocals and no need for a plug-in de-esser. That said, we advise against reducing sibilance en masse when decreasing by more than 50 per cent on lead vocals. Otherwise, the sibilance tends to become an unvoiced ‘th’ sound.

Conversely, you can kill the vowels and keep the sibilance, which can be useful if, for example, you need to add intelligibility back into BVs.

The second reason the sibilance tools are so important relates to double-tracked and stacked vocals. Having half a dozen consonant sounds delivered at slightly different times sounds sloppy can undermine intelligibility. With Melodyne 5, we were able to re-time sibilance on six backing vocal tracks to lock them to the same moment, all in just a few minutes. The process isn’t fully automated but once you can see the sibilance, it makes life a lot easier.

In our tests, we found that the detection was remarkably accurate on S, Z, Ch, K and T sounds but less successful at discerning Th sounds. In the context of our tracks, though, it was no real issue.

What’s ingenious about the processing behind the new sibilance tool is that, in the background, it separates the noise and tonal portions of the vocal sound, so that sibilants are not affected by tuning at all. It genuinely makes for a more transparent process. 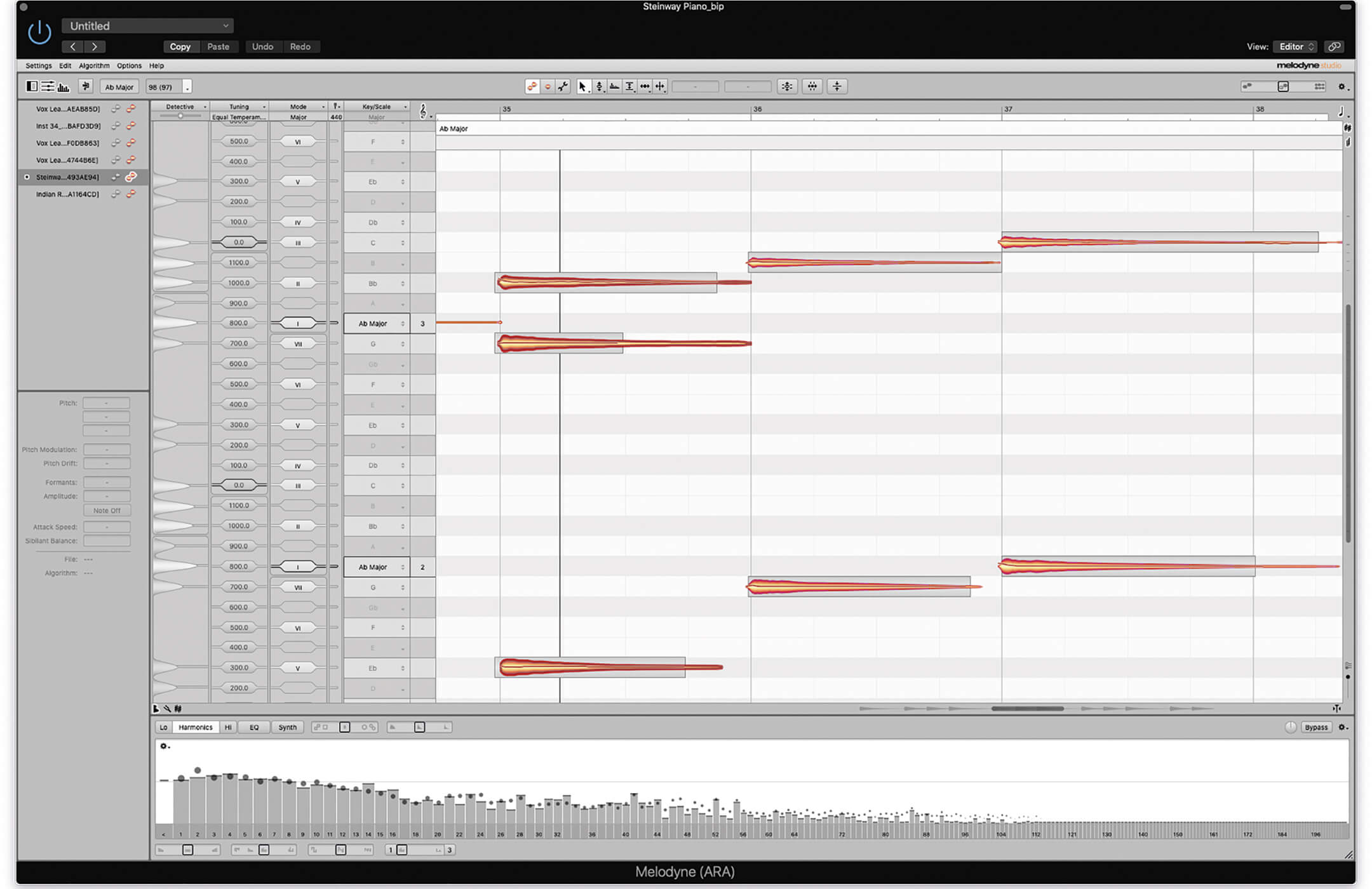 Celemony has also improved the accuracy of its Melodic algorithm, as we learn when we compare a singer’s performance in Melodyne 4 and 5, with automatic pitch quantisation applied, and hear a subtle difference. Celemony says the algorithm listens the way humans do, rather than taking an average pitch over a note’s duration. Admittedly, our test is crude, and once you start splitting up notes manually so the algorithm can get a better sense of what it’s analysing, the results are more subjective.

Celemony has focused on workflow with this update. Our favourite addition is the ability to double-click to centre errant notes to the nearest exact pitch. If you’re just nudging the odd flat note onto the grid, it’s a slick and speedy solution.

When combined with the new Analyze Chords tool, that double click becomes a supercharger for faking vocal harmonies. By analysing chords on a harmonic audio track, Melodyne can, with some accuracy, understand what chords you’re using in your song. This chord data appears in all plug-in instances in your session. Jumping back to a duplicate lead vocal lets you quickly knock up a workable harmony part that fits with your song’s harmony.

Chord Recognition and Chord Track also allow for extraordinary creative play. Once your chords are analysed, you can conform any other audio content too. This works best with monophonic material and arpeggios with clear attack on each note. In a bid to confuse the algorithm, we feed some strummed guitar chords into Melodyne, with two of the strings out of tune. Amazingly, double-clicking not only transposed the chords into their new keys but fixed all the intonation issues. Yes, there were some artefacts but this could get you out of a tight spot if you need an acoustic guitar layer and but don’t have the requisite playing chops.

The chord-analysis function isn’t always accurate but the more tracks you have playing, the better it will be. For more control, Melodyne offers other interpretations of the notes, accessed via a drop-down menu. With these, some manual chord entry may be necessary too.

The new pitched-percussion algorithm means Melodyne can tune drums too. In our tests, it has trouble detecting the attack of a tuned 808 kick, but in processing tabla and beatboxing audio, it tunes clashing pitches well without destroying the character of the performance.

Melodyne 5’s new levelling macro has downward and upward compression, which means you can use it to reduce the level of the loudest notes and increase that of the quietest ones. If you’re in the habit of levelling lead vocals with clip gain before they hit a compressor, you’re going to love this. There will be a bit of tweaking to do but, even still, this tool puts you in a strong starting position.

That’s something to remember with all of Melodyne’s macro tools. Correct Pitch, Quantize Time and Note Levelling could be mistaken for magic but they’re just algorithms. Consequently, you’ll still need to intervene. They won’t perfectly fix your vocals the first time.

The one scenario where the levelling macro didn’t astound us was with a roomy acoustic guitar recording. It didn’t succeed in giving each string a more consistent level within a chord. It was more successful with clean DI’d electric guitars though.

The new fade tools are useful for tightening up backing vocals and creating crossfades between notes but are more attractive as sound design and creative tools. The way you can batch-change the amplitude envelope of any audio signal, even within a chord is impressive, even if it does create some sonic artefacts. 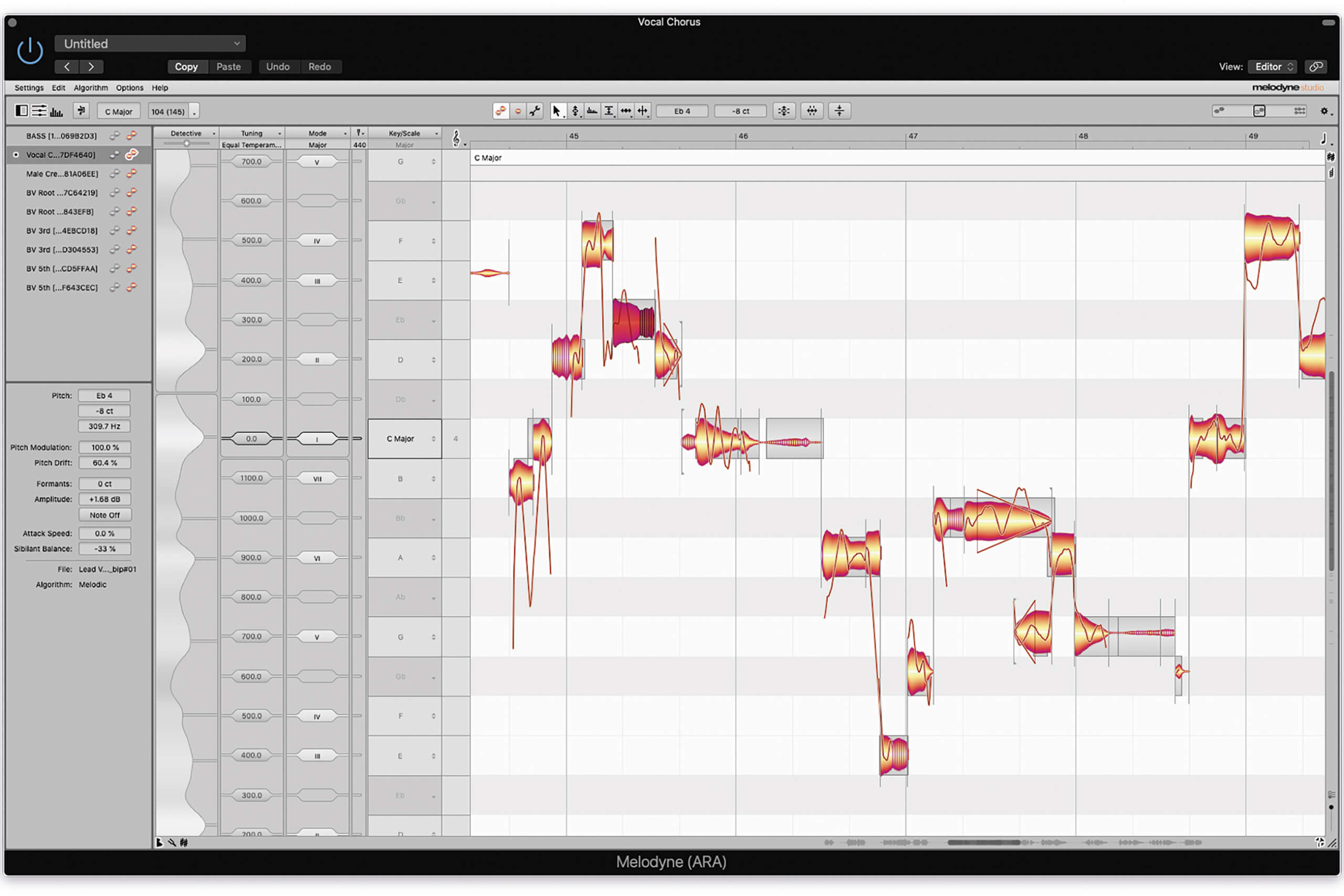 There are four versions of Melodyne. While Essential (€99) shows you sibilance in the Melodic mode, there are no sibilance editing tools present. At the next rung up, Assistant (€249) gives you all the tools mentioned in this review for monophonic sources. If you’re not going to be editing polyphonic sources, this is a solid choice. Editor adds DNA for polyphonic manipulation and tempo editing, as well as the Scale Detective. At €499, Editor not cheap but if you’re working on the grid, it can do most of the miraculous things you will likely want it for. Finally, Studio adds multitracking and various other even more advanced tempo features and it goes for €699. If you want all the most elite feature set, this is for you.

Melodyne 5 isn’t the only game in town when it comes to pitch and time manipulation but it may as well be. It’s so far ahead of the competition that there’s little point in any developer coming for the Celemony crown. But it’s not exactly cheap and you may be able to get away with built-in solutions in your own DAW or more affordable for simple tuning tasks. Logic, Cubase and Pro Tools all have monophonic pitch-correction tools. However, if you want something that’s going to give you all the creative tools to rework audio material as if it’s MIDI, and save you loads of time when tuning vocals, it might be time to invest in Melodyne. You won’t regret it. 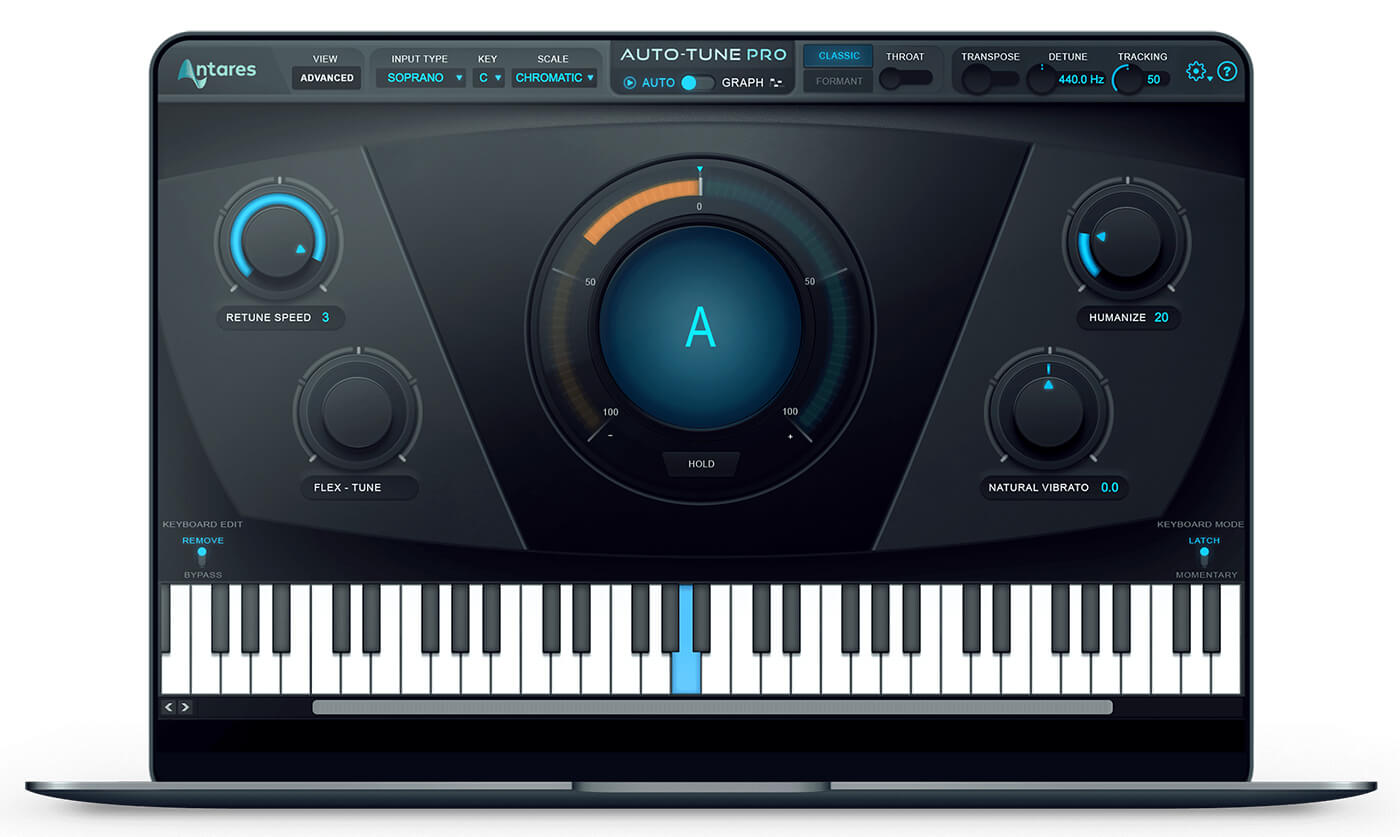 Antares was the first to the pitch-correction party in 1997, four years before Celemony. Known for the hard-tuning effects used in R&B, Auto-Tune is also a powerful tool for transparent pitch correction with its built-in graphic mode. 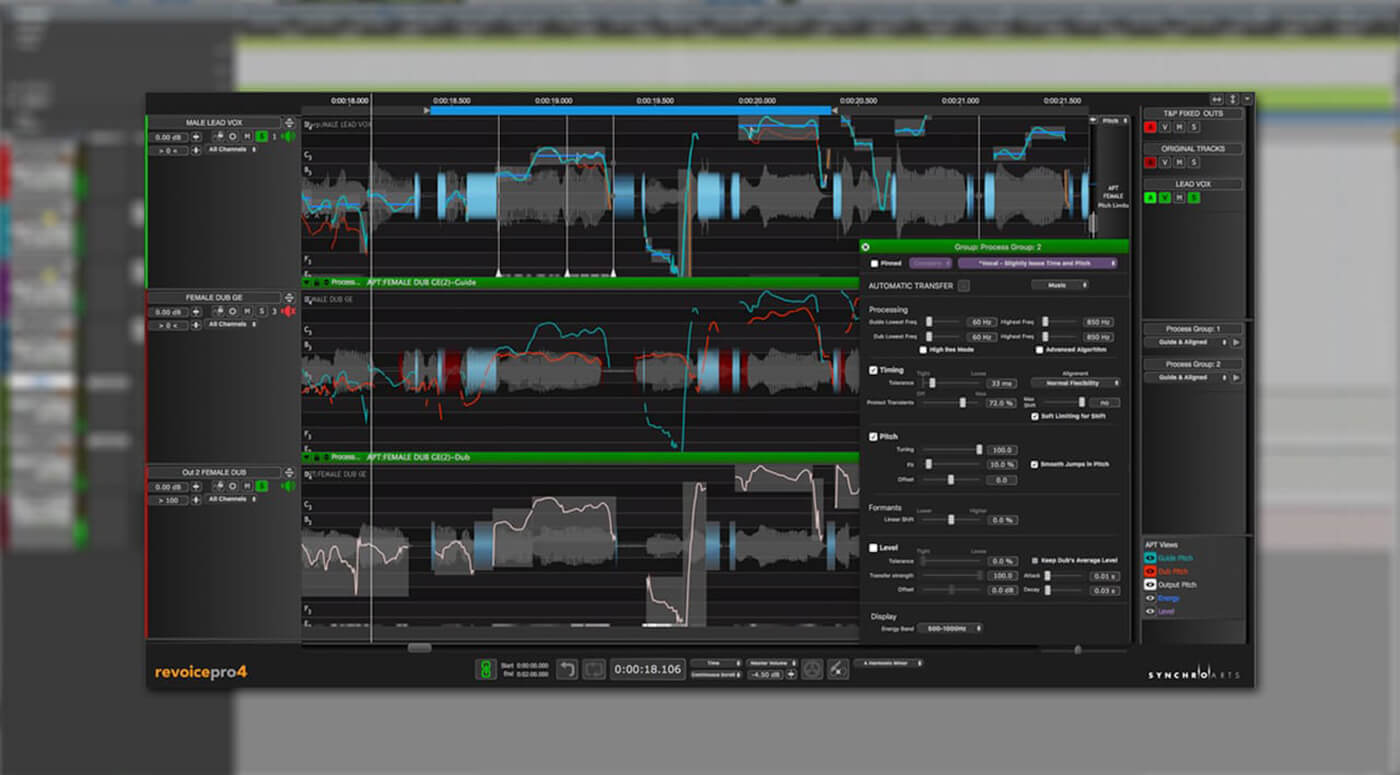 Another package compatible with ARA2, ReVoice has a neat trick: aligning vocals. It’s also got some very handy pitch-correction tools and can generate a realistic sounding vocal double in no time.