With built-in presence boost, incredible build quality and an affordable price point to boot, we ask whether Lewitt has perfected the small-diaphragm condenser with its latest microphones. 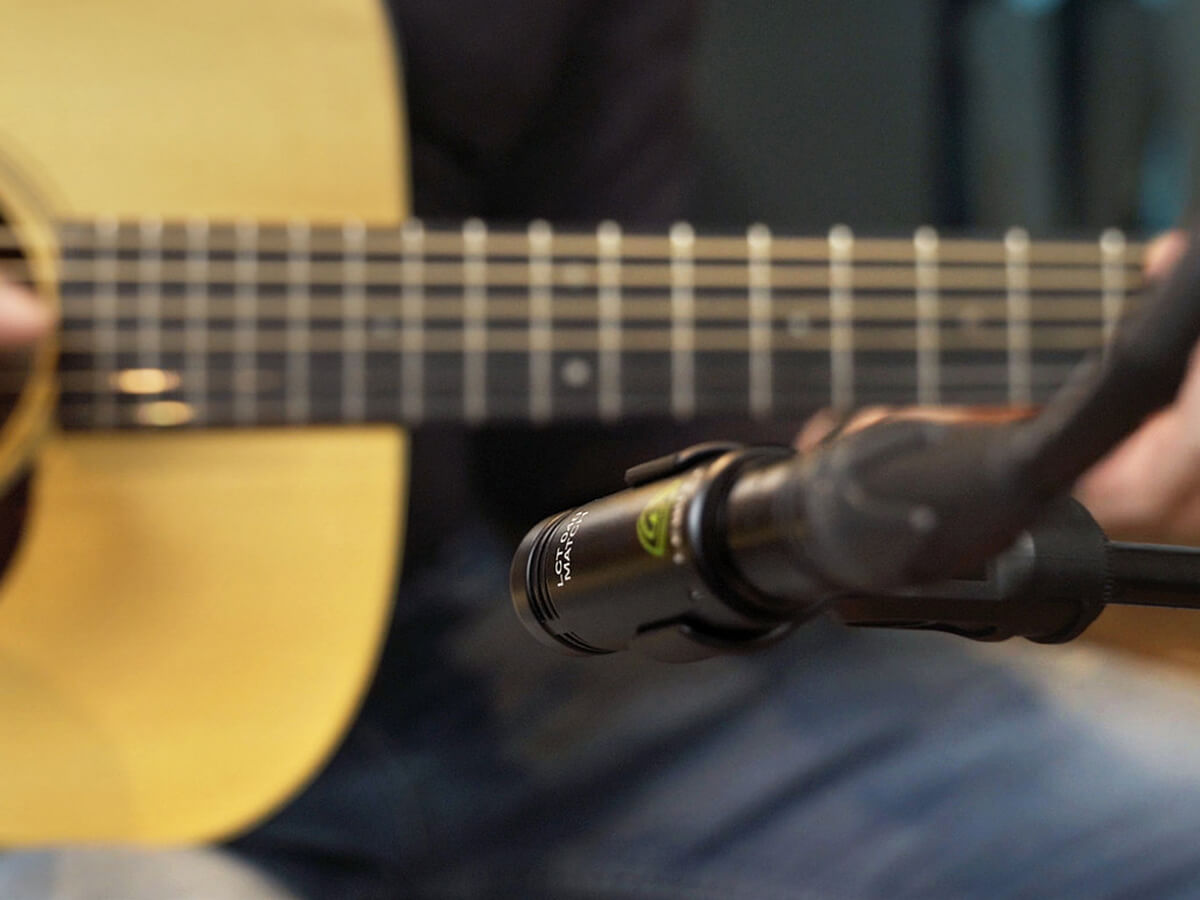 Lewitt Audio is a relative newcomer to the world of microphone manufacturing. However, the company offers a wide range of mics to cover all types of application in both live and studio settings.

The microphones on test here are the latest additions to the Austrian company’s LCT series of recording mics. The LCT 140 Air and LCT 040 Match have much in common, both being lightweight, small-diaphragm condenser mics. Each mic uses a 17mm (0.67-inch) pressure-gradient transducer in the capsule, operating with a fixed cardioid polar pattern. The Match is offered both as an individual and as a precisely matched stereo pair, the latter of which we will be addressing later in this review.

Let’s begin by looking at the LCT 140 Air, designed principally for recording acoustic instruments. Weighing only 66g (2.3oz), the mic is very lightweight, though its CNC’d aluminium housing is designed for durability. The mic’s body features three switches, two of which – an 80Hz HPF and -12dB pad – are fairly common features, while the Air switch offers a transformation of the mic’s sonic character. Though the LCT 140 is designed to provide a linear frequency response when used flat, engaging the Air switch produces a high-frequency boost, which Lewitt claims produces a “record-ready sound from the start”. In practice, it gives a sparkling treble boost, adding presence and a spot-lit brightness.

Although the LCT 140’s specification sheet lists max SPL and dynamic range (and even supply voltage and current consumption for that matter), there are no specs relating to the Air setting or indeed the mic’s frequency response in general. There is an oddly unspecific graph showing a hump in the treble region, however no figures are quoted to indicate the exact frequency band or level of the top-boost. The LCT 140 Air, like the LCT 040 Match, comes with its own mic clip, foam windshield and storage pouch, which are nice additions.

An obvious first test for the LCT 140 is to use it on an acoustic guitar. I place it in the classic position pointing towards the 12th fret at a distance of around eight inches (approx 20cm). Set to the flat position, I’m surprised by how full-bodied it sounds for such a small microphone. The warmth from the low-mid tones produced by the guitar is captured smoothly, while the sound of plectrum against strings is delivered with great precision, the finely etched leading edges convey crisply, without undue emphasis. The smoothness noted in the lower registers is maintained throughout the frequency spectrum, right up to the highest frequencies. Affordable condenser mics are often let down by a ragged top-end response, yet the LCT 140 delivers silky smooth highs with no hint of brittleness.

Breathe in the air

Switching in the Air setting produces a noticeably brighter sound, adding a glossy shimmer to the overall tone. ‘Air’ could be considered something of a misnomer for this particular type of high-frequency top-up, as I tend to think of air as being higher up the frequency spectrum, adding a halo of space rather than an obvious top-boost. Thermionic Culture’s new Kite equaliser has an Air control that more properly lives up to its name, reaching beyond 20kHz at full pelt. Perhaps Presence or Sparkle would be a more fitting name for this microphone.

Using the LCT 140 as a spot-mic on a snare drum, the ‘Air’ top-lift really comes into its own, bringing out the crack and snap of the wooden-shelled drum. Switching out the Air results in a flatter thwack not nearly as flattering to the drum’s natural sound. Indeed, the top-end sweetening enhances most audio sources, though care should be taken not to use it as a default setting when a more natural, linear presentation is required. On our upright piano, for instance, the flat response of the microphone conveys the mellow nature of the instrument far more convincingly; switching in Air merely adds an unwanted honky-tonk vibe.

Moving on to the LCT 040 Match, we have a stereo matched pair of microphones manufactured to produce precise stereo imaging. The petite Match is even smaller and gossamer lightweight than the Air, measuring a mere 83mm (3.3 inches) and weighing in at 44.6g (1.6oz). Designed for instrument mic’ing in a studio environment, the LCT 040’s diminutive dimensions make it ideal for applications where space is tight.

With its gold-plated XLR connectors (a luxurious touch for such an affordable microphone), the Match shares several features with its bigger brother. The family signature sound is evident, too, as I discover when I use the pair on the upright piano. Tonally, the Match sounds similar to the Air without the top-lift. Full-bodied and smooth in nature, albeit with excellent transient response and detail, the LCT 040s produce a fine stereo image when used as a spaced pair. Similarly, a spaced pair on acoustic guitar – one mic pointing towards the bridge, the other at the neck – reveals a broader tonal palette than using the LCT 140 Air in mono.

Using a single LCT 040 Match in the same 12th fret position as the LCT 140 Air, however, highlighted the similarities between the mics, so I revert to the latter for the spot mic and throw up the pair of LCT 040s as room mics. As the stereo matching of the Matches is so exacting, they are an ideal choice for stereo room ambience, their open nature adding a lovely expansiveness that is extremely effective on simple singer-songwriter type recordings.

As these mics sound fuller than their size would suggest, I next try them on a drum kit, employing the classic Glyn Johns three-mic method; an AKG D112 on the kick drum completes the line-up. This method usually produces a natural, balanced stereo image with kick and snare centrally placed. The Lewitts perform remarkably well, capturing the punch and weight of the kit as well as the transient attack of the snare and hi-hats. Given the choice, I’d still opt for the richer sound of AKG C414s or the phat sound of Cole 4038s for this method; however, I can imagine the LCT 040s used as overheads in a multi-mic setup, especially if they were treated more as cymbal mics and filtered accordingly.

I thoroughly enjoyed my time with these excellent new microphones from Lewitt. Their warm yet open character and, especially, their refined top-end response sounding far more sophisticated than their modest price would suggest.

Anyone looking for a great, versatile small-diaphragm condenser mic should check out the LCT 140 Air as a priority, particularly those who frequently record acoustic guitar and other acoustic instruments.

Similarly, if you like to record in true stereo, as opposed to creating stereo mixes from multiple mono sources, the bang-for-buck quality of the LCT 040s will be difficult to, erm, match. So, hats off to Lewitt for offering these high-end sounding original designs at prices affordable to everyone.

Small-diaphragm condenser microphones may not be the first choice for the type of bedroom producer that owns one mic to cover all bases, however a good example, such as one of these LCT mics, is an important addition to any respectable microphone collection. The ace in the LCT 140’s hand is its top-boost ‘Air’ control, which, as a sparkling presence boost, adds a lovely sonic sweetening to audio sources.

On acoustic guitar, for instance, it provides a shimmering top-end far better than using EQ boost on an old and cheap mixing console. The LCT 040 Match is similarly refined, though without the HF enhancement – however, used as a precisely matched pair, these microphones are a perfect introduction to the world of true stereo recording. Either of these new microphones would be an excellent choice for anyone looking to extract all the natural detail of acoustic instruments. 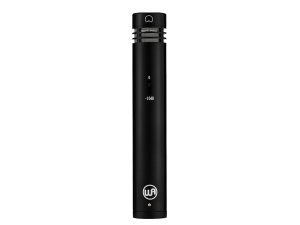 This is a small-diaphragm condenser microphone based on the classic Neumann KM 84. Side by side comparison with an original KM 84 (worth over £1,000) produced almost identical results. Featuring a CineMag USA transformer, it is closer in design to the original than Neumann’s own KM 184 descendant. 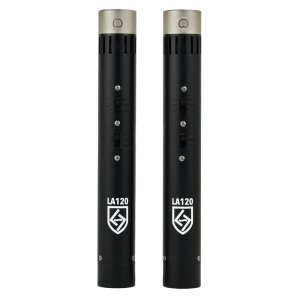 These small-diaphragm condenser mics have swappable cardioid and omni capsules. Reviewed by Mike Hillier, he opined: “The Lauten Audio Series Black range delivers pro results at affordable prices and, while they may be aimed at smaller setups, the LA-120s could easily find themselves being used in much larger studios because of their incredible versatility.”