From the grandmasters of hardware outboard comes another mighty bird-of-prey. We take flight with a high-flying EQ unit… 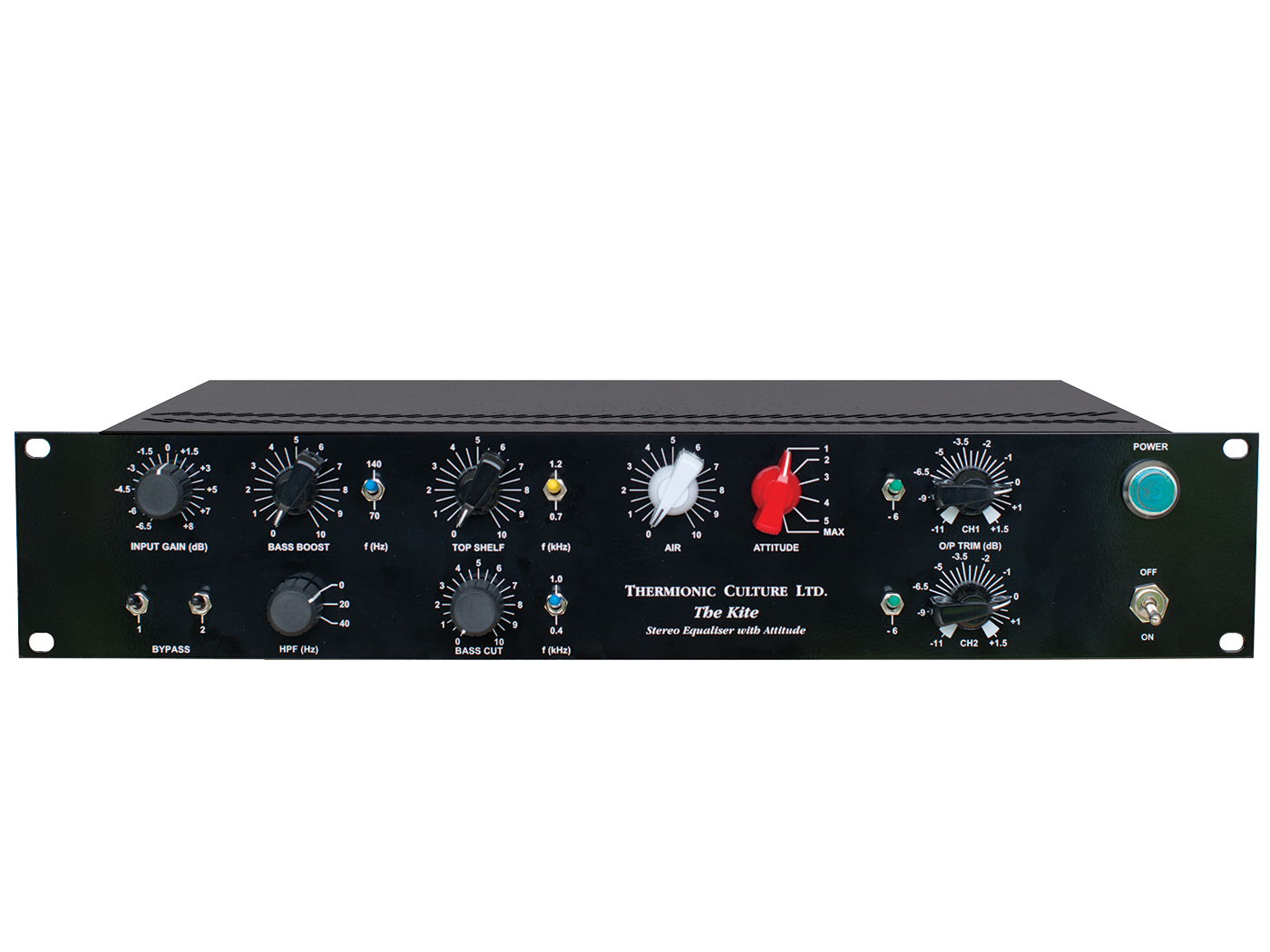 Equalisation is one of the fundamental tools of audio engineering. It can be extremely useful as a corrective measure to cure problematic sounds, though there are those who insist that if you need to reach for the EQ, you’ve failed to get a good sound at source or made a poor choice of microphone. And then there’s that old chestnut that says if you must use EQ, cut rather than boost.

I can appreciate this viewpoint in relation to capturing pure, natural sounds – recording classical music, for example – yet most of us are involved in producing pop music (in its broadest sense) where experimentation is key to producing an ear-catching sound. Creative equalisation is a subject dear to my heart and Thermionic Culture’s new stereo equaliser The Kite is firmly in the creative EQ camp.

Thermionic already offers a superb stereo equaliser in The Swift; however, whereas The Swift is a relatively conventional two-channel (dual mono) equaliser, The Kite is aimed squarely at stereo sources. It can be used to process single-channel sources, of course, but it can’t be used to simultaneously process two separate mono sources.

Visually, the unit looks like a single-channel processor because stereo signals are controlled via a single set of pots and switches, except for the left and right output trim controls. Other front panel controls consist of stereo-input Gain, Bass Boost, Bass Cut, Top Shelf (lift) and a two-position high-pass filter (HPF) with a 12dB/octave slope, giving -6dB at 20Hz or 40Hz.

The Bass Boost is TC’s own vari-slope design, operating as a shelving boost at 140Hz and 70Hz. These frequency points may look unusually high; however, the nature of the vari-slope design means that up to around position 6 on the control, there is a gentle shelf boost (maximum 3dB) at these points, whereupon further boosting brings up the low end, peaking at 30Hz and 20Hz at full boost.

Bass Cut is purely a shelving control; the selected frequencies of 1kHz and 400Hz correspond to 3dB cut points. This control can be used in conjunction with the Bass Boost control to create some interesting and useful EQ curves, rather like the classic ‘low end trick’ performed on the Pultec EQP-1A.

Simultaneous boosting and cutting may seem counter-intuitive, but as the frequency points of the boost and cut differ, the result is a lovely bass lift along with a low midrange dip. This can be used to great effect to add some heft to the bottom end while scooping out low mids where muddiness can be a problem.

High as a kite

The Top Shelf control, with selected frequency points of 700Hz and 1.2kHz, seems even more unusual than the bass EQ lift, especially when most engineers think of ‘top’ as around 5kHz and above. In practice, this control is a broad presence boost with the quoted frequencies being +3dB points. While this control adds a gorgeous, sweet treble boost, the true top-end of the frequency spectrum is enhanced by the Air control.

Like all the EQ controls on The Kite, the Air control can be used quite liberally to great effect. In fact, at the lowest boost settings, the high-frequency enhancement is subtle, kicking in above 20kHz. Dialling up the wick introduces a far more noticeable top lift, so that at position 10, audio is treated to a 5dB boost at 10kHz along with a super top lift peaking at 40kHz. Such is the quality of design that even at the highest settings, processed audio has almost no phase shift.

The final control to mention is the Attitude control, which will be a major draw for many potential customers. This control adds 2nd-harmonic colouration to produce a wonderfully musical valve distortion; at position 1, distortion is 0.01 per cent rising to five per cent at the highest setting.

This particular control is unique to Thermionic Culture and relies on the use of a specific valve type. The input valve is a General Electric GE5965, originally designed for use in the computer industry. TC is the only company to use it in a pro-audio capacity and, as the company’s head honcho Vic Keary told us, it sounds “fantastic”.

Vic also explained how the Kite came to be created: “We had a lot of people saying they loved the Attitude and EQ controls on the Fat Bustard summing mixer but didn’t need the summing, so we expanded the EQ, added the Air control, and The Kite was born.” The EQ curves were the brainchild of Nick Terry, who is described by Vic as the “ears” of the company. 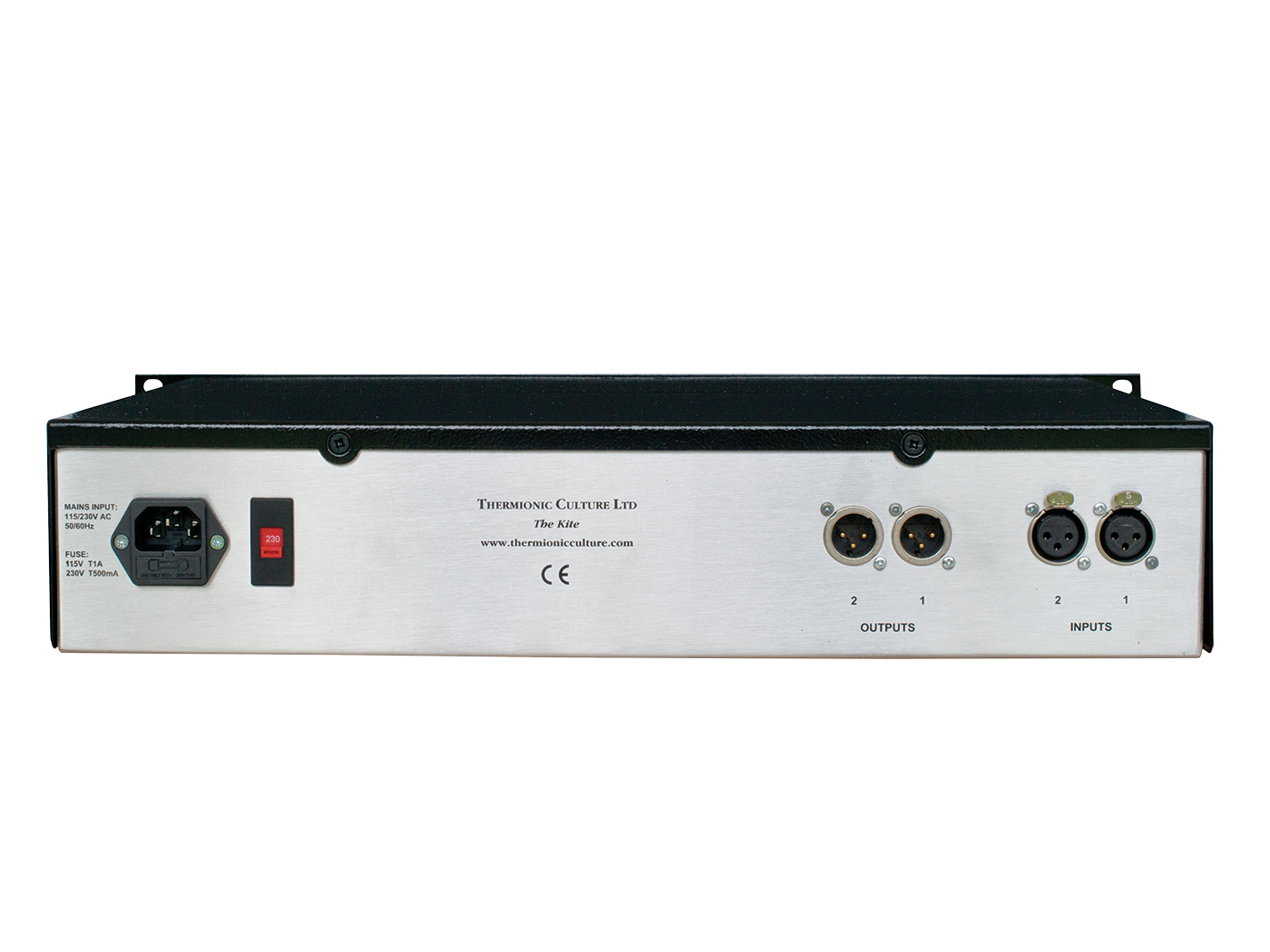 The Kite is built to Thermionic Culture’s usual high standard, being weighty and nicely finished in the company’s traditional black. A transformer-balanced version in a purple finish is available as a special order, though in stock form, The Kite has ‘semi floating’ XLR inputs and unbalanced outputs.

Following power up and a 30-minute warm-up period, I ran a previously recorded stereo sub-mix of drums through the unit. Proceeding gently at first, it quickly becomes apparent that The Kite works best when large amounts of boost or cut are used. Going back to my original observations about modern attitudes to EQ boosting, I’m convinced many engineers have been made wary of boosting EQ after hearing the nasty-sounding EQ sections on cheap analogue desks.

No such reservations about The Kite, though: you can begin by dialling in full EQ boost and then back off to achieve the desired result. The Top Shelf boost brings out the attack and presence of the snare drum brilliantly without making the cymbals sound thin and tinny. The Air control, at near-maximum settings, adds crispness as well as imparting a halo of space, producing an almost 3D quality. Dialling in a fair amount of Bass Boost (70Hz setting) gave the bottom end – especially the kick drum – exceptional weight and heft.

However, the real magic occurs when simultaneously dialling in some Bass Cut. This preserves the low-end welly, but introduces a dip in the low mids, scooping out some boxiness to accentuate the punch and tautness of the drums. Switching in various degrees of Attitude introduces a harder, more forceful sound, the gently squeezed dynamics making the kit sound subjectively louder. At the highest Attitude setting, the sound is positively filthy, with obvious crunch and grit to the fore.

The Attitude control is great on vocal tracks, too, adding a convincing vintage valve distortion that’s not available from solid-state units. At moderate settings, it’s possible to replicate the distinctive sound of old analogue recordings, where the vocal has been ‘burnt’ to tape at a high level to achieve a hot, saturated tone.

The Kite is not a conventional equaliser, in the manner of parametric and graphic types. Rather, it’s an enhancer, making good-quality recordings sound even better. It can be used in a more corrective capacity, bringing to life dull or flat-sounding mixes and sub-mixes by adding Air and presence or reducing muddiness with the Bass Boost and Cut controls. Yet if your mix is great to start with, The Kite will really make it fly.

Thermionic’s The Kite stereo equaliser is ideal for shaping the tone of stereo sources such as drum busses or sub-mixes. Used as an enhancer, rather than a surgical tool, it can bring life and vitality to final mixes, especially when using the Attitude and Air controls, which are worth the price of admission alone. As we’ve said before, there is a quality and vibe with valve equipment that cannot be achieved with solid-state products, and The Kite is a perfect example. 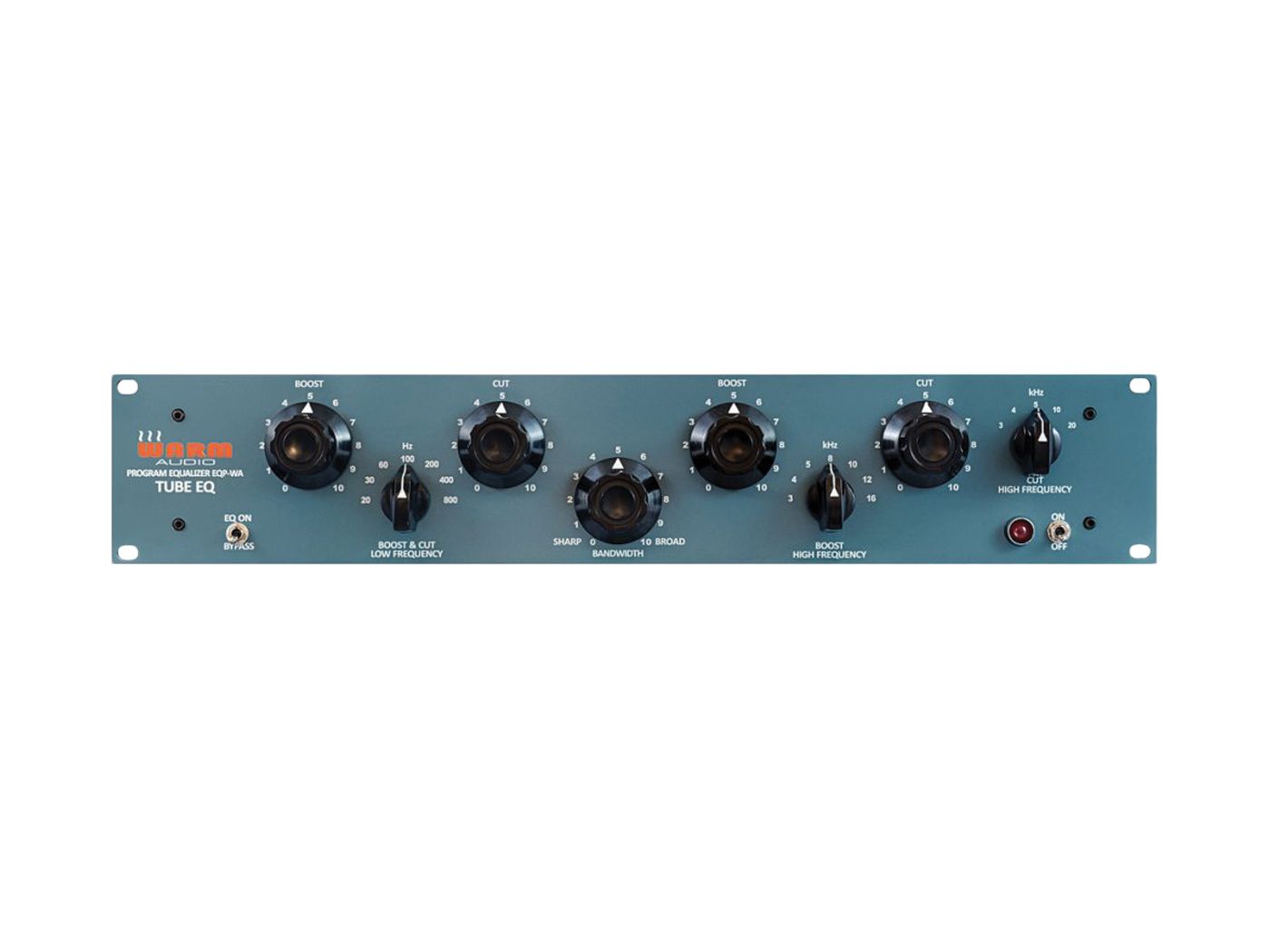 An excellent clone of the Pultec EQP-1A, this is a single-channel unit, so two are needed for stereo operation. The unit is famed for its performance of the ‘low end trick’, a bass lift with a low-mid dip. 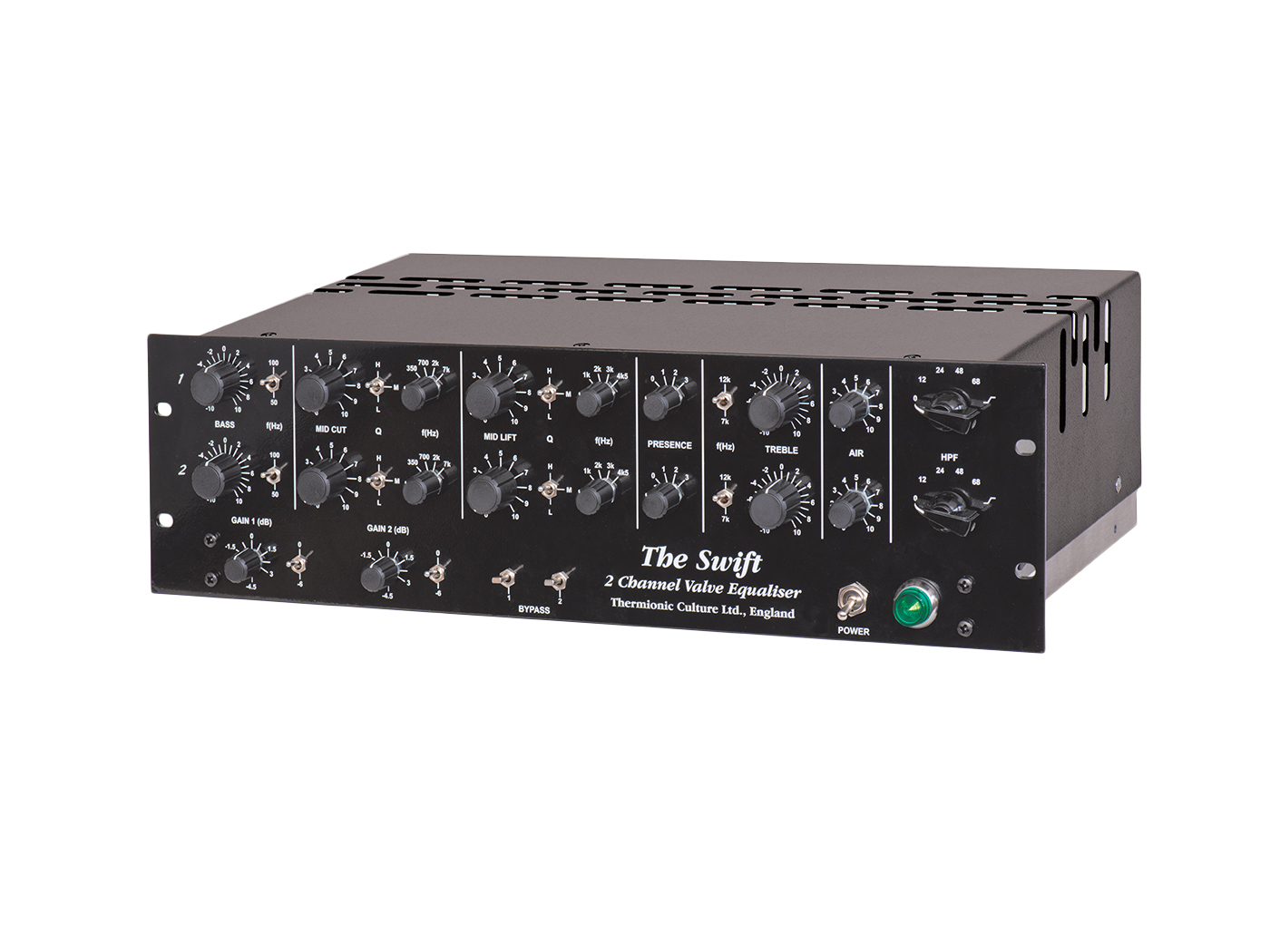 An all-valve stereo equaliser with high- and low-frequency Baxandall-type shelving EQ, as well as TC’s Air control. Switchable midrange boost and cut along with Vic Keary’s original presence boost complete one of the finest EQs in production.