IK’s latest mobile interface is its most feature-packed to date. But is it possible to appeal to everyone from podcasters to film makers? 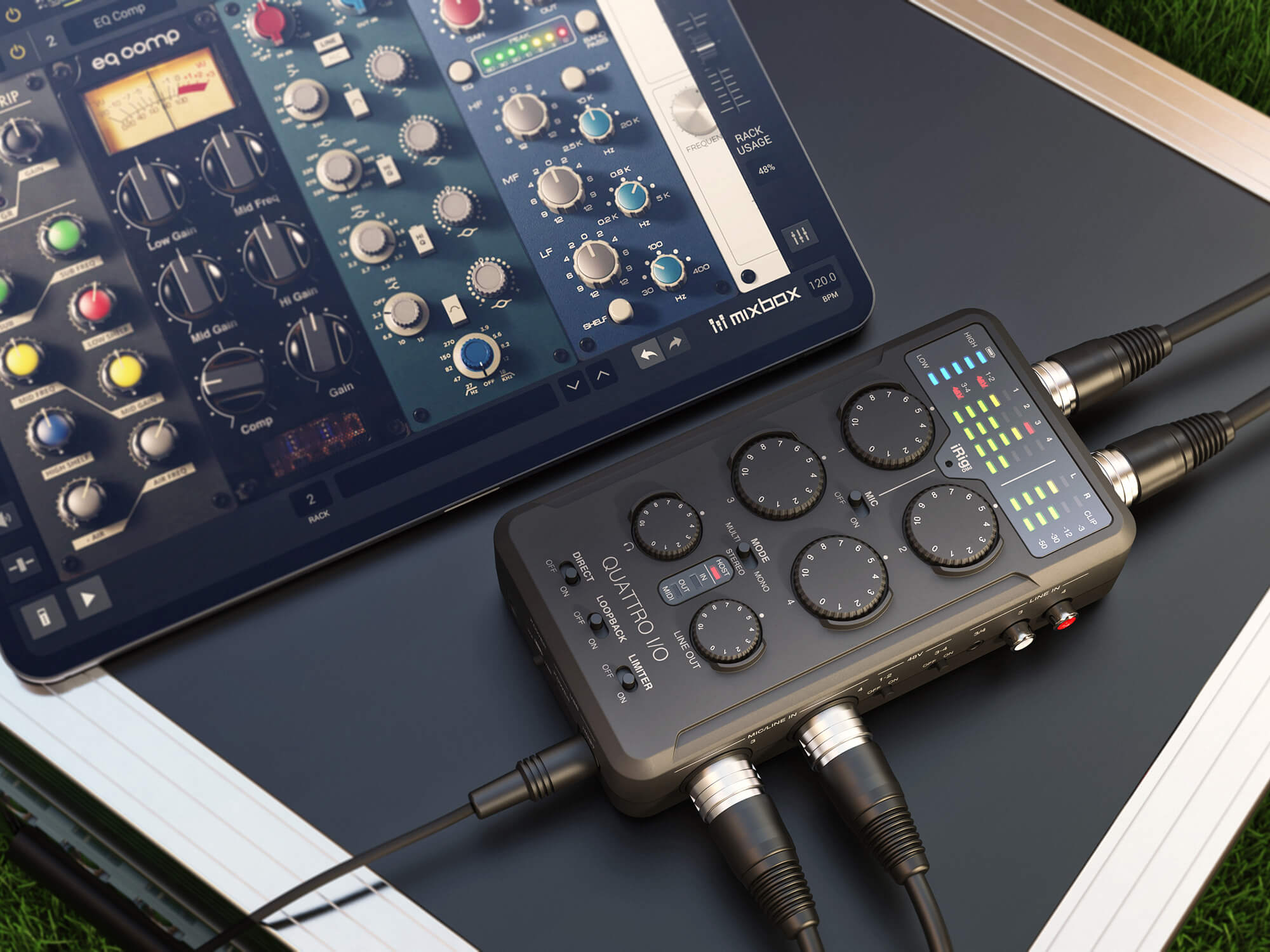 The latest member of IK’s iRig family is the iRig Pro Quattro I/O, which for the sake of brevity we will henceforth simply call the Quattro. The most fully featured model in the lineup, it’s designed to cover all manner of recording and mixing requirements from field recording to podcasting, from streaming to recording a live band. It does this by incorporating a wider selection of ports than you might expect to find on such a compact unit and offering several power options.

It’s quite lightweight, even when powered by the four AA batteries you can fit, and it’s also possible to power it from an optional mains adapter (not included in the standard package), via micro-USB or by USB-A, USB-C or Lightning via the Host port. You get cables for each of these in the box, and if you do mains power the interface it will pass-through charge your smartphone or tablet at the same time. It’s Mi-Fi certified for iPhone and iPad, works with the Mac and Windows (which requires you to download an ASIO driver) and also with compatible Android devices. Points as ever to IK for being one of the few pro audio developers that consistently supports Android users. Also included is a clip-on adapter for attaching it to a boom or DSLR via a screw thread. 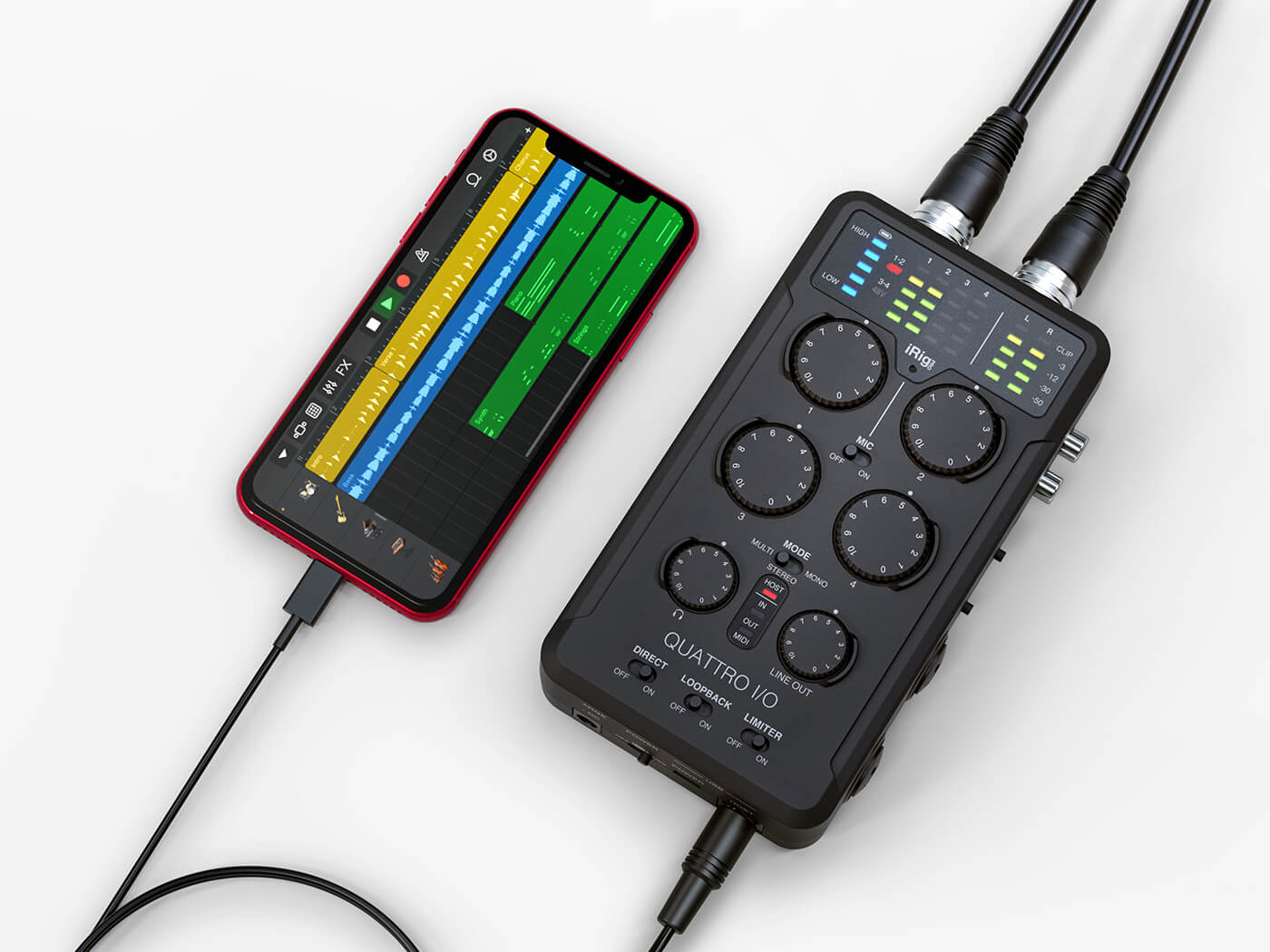 On then to the I/O, and boy is there a lot of it, with every surface utilised. There are four combo XLR inputs with switchable phantom power, stereo phono inputs and a 3.5mm input jack as well as a small omnidirectional onboard MEMS mic which offers decent quality for interview-style recording. Two balanced XLR outputs let you run signal to speakers, mixers or other devices and there’s also a stereo 3.5mm output, headphone output with switchable direct monitoring and MIDI in/out via micro jacks. There’s one 2.5mm TRS male to female MIDI cable included for you to hook up a MIDI source or destination – typically this might be used to trigger a hardware instrument from software or for connecting a MIDI controller to an instrument or DAW. MIDI support is a bonus and makes the Quattro more of an all-rounder than you perhaps expect from what looks primarily like an audio device. You’ll find an exhaustive spec list of the I/O here. 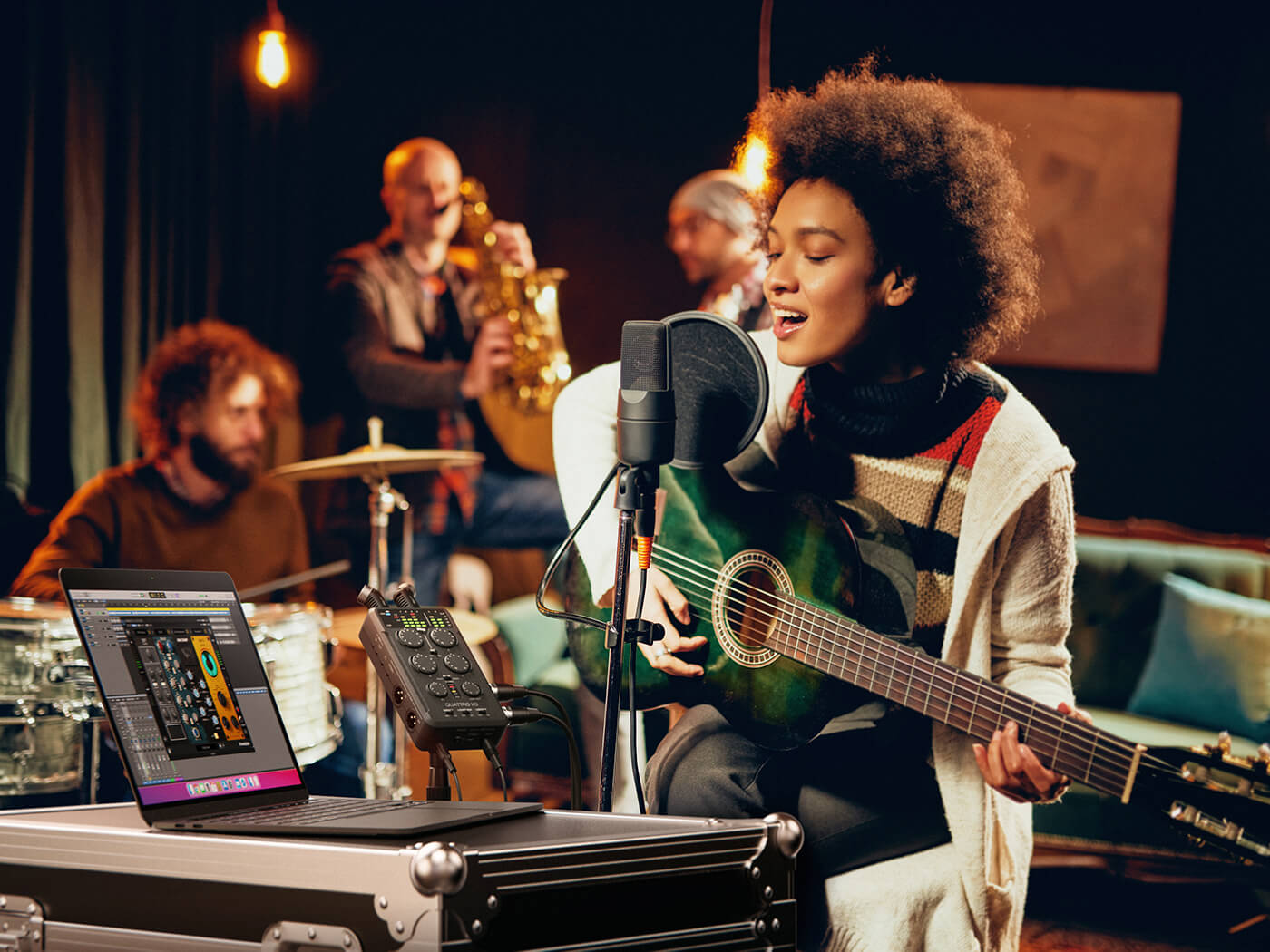 The top panel is where you control levels and the Quattro can actually be used as a standalone mixer as well as for recording. It’s all pretty straightforward and there are some nice touches like ridges on the outside of the dials so they can’t be accidentally knocked and their levels altered. The four input channels, headphones and line out all have dedicated volume dials and there’s a switch for mono, stereo or multitrack mode. In mono or stereo mode the signals are mixed down before being sent and in multitrack mode, four separate channels are sent via the Host port. Visual feedback from the various LEDs is good, especially considering the compact size of the unit.

As noted there’s switchable direct monitoring to eliminate latency when recording, and also a loopback option to mix in the audio from a video playing on your device, for example. Interestingly IK has also created something it calls Loopback +, which lets you use channels 3 and 4 to send signal out to apps like their own MixBox, AmpliTube or VocaLive to be processed and then bring it back into channels 1 and 2, essentially using the apps like real-time FX. In stereo and mono modes, inputs 3 and 4 can be used as safety channels to record the same signal as channels 1 and 2 but 12dB quieter in case of overloads. You can also activate the onboard limiter for inputs 1 and 2 to help protect against clipping.

The Quattro can operate at up to 24-bit, 96kHz sample rate and in our tests it provided crisp and clear recordings when paired both with an iPad and a desktop computer. Recording into Logic on a Mac and multitracking into Cubasis on an iPad Pro, we got great results. For fun we also used it standalone mounted on a DSLR cage for run-and-gun style shooting and recording. You can mount it on the camera with a screw adapter but if you do have a cage, affixing the Quattro to it provides a less unwieldy solution, especially when XLR cables are sticking out of the sides. 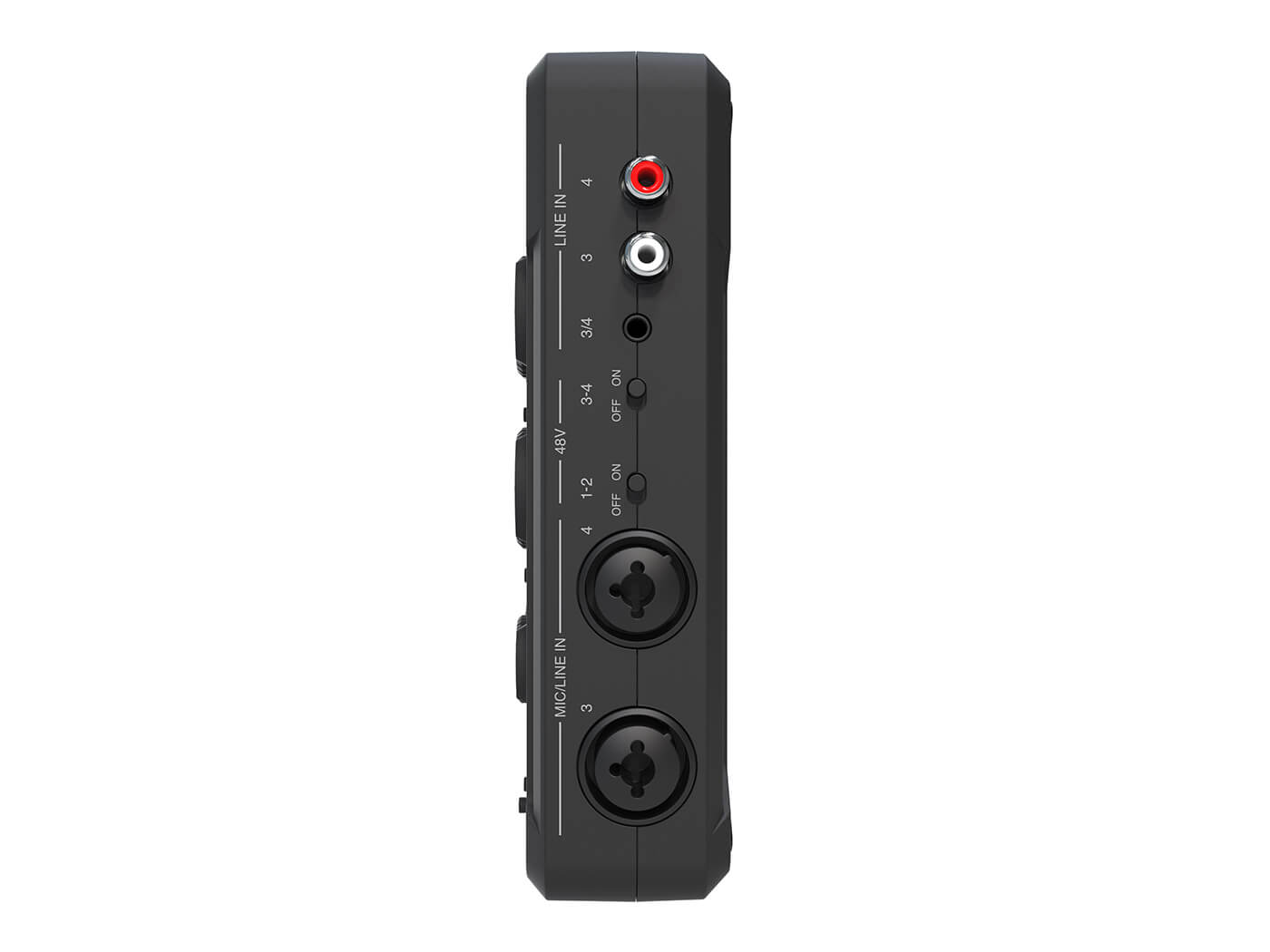 We’ve mentioned that you can record to mobile devices and computers and also use it as a standalone mixer, but it’s slightly puzzling that IK hasn’t included an SD card slot. The company presents this as a virtue – “no more digging around for SD cards” – but given its portability, the battery option, onboard mic and optional stereo mics in the deluxe bundle, it would have been nice to have the facility for truly standalone recording without the need for a phone. It’s possible that doing so would have necessitated adding a screen and thus changing the design and power needs of the device but still, it’s a bit of a shame.

As it often does, IK draws on its broad stable of software to offer a generous bundle of extra goodies which you can download after registering your hardware. For the desktop you get Amplitube 5 SE, T-RackS 5 SE and a choice of two SE/CE versions from a selection of SampleTank, Miroslav Philharmonik, MODO Bass, MODO Drum and Syntronik 2. For iPhone and iPad there’s a bunch of free upgrades to versions of IK’s apps including VocaLive, AmpliTube and iRig Recorder. A full list can be found here. 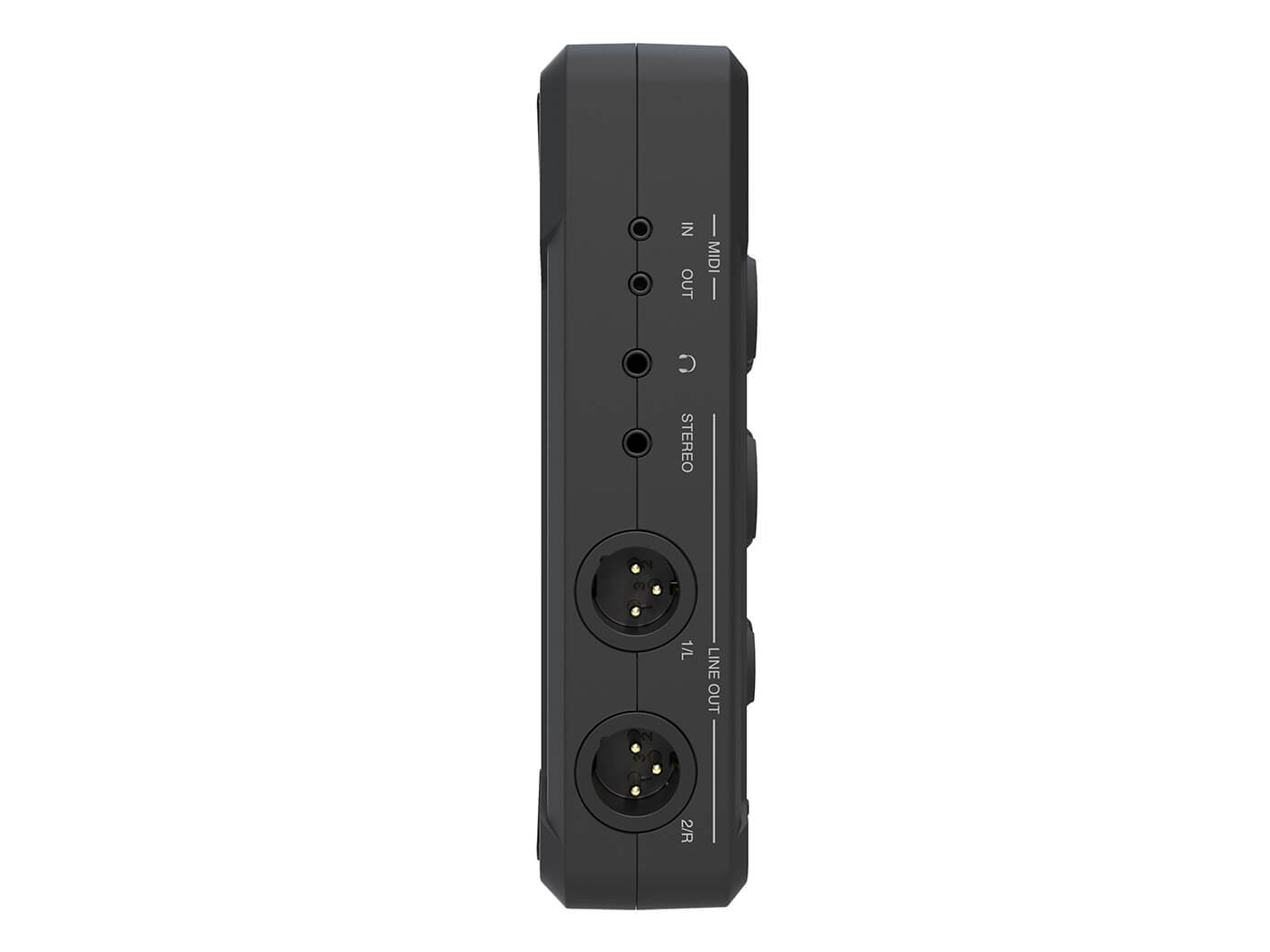 The Quattro lends itself to a few different use cases and acquits itself well. There’s pro-level i/o with the phantom powered XLRs, internal downmixing when needed, clever loopback features and an onboard mic. We didn’t receive the additional X/Y mics to test but it’s likely they make it a more capable field recorder, with the caveat that you’ll still need to connect a recording device like a smartphone. Being able to hook up a variety of devices from pro mics to analogue gear and beyond means it’s very flexible, and having MIDI is a nice bonus too, making it more useful as an interface for producers than if it only did audio.

It’s arguably not competing directly with desktop-only interfaces, designed as it is to be more of a go-anywhere sort of a device, even if it is perfectly possible to use it as a desktop unit. As such it’s sort of in a category of its own and should find fans across the spectrum from podcasters to videographers, iPad beat makers to live performers. 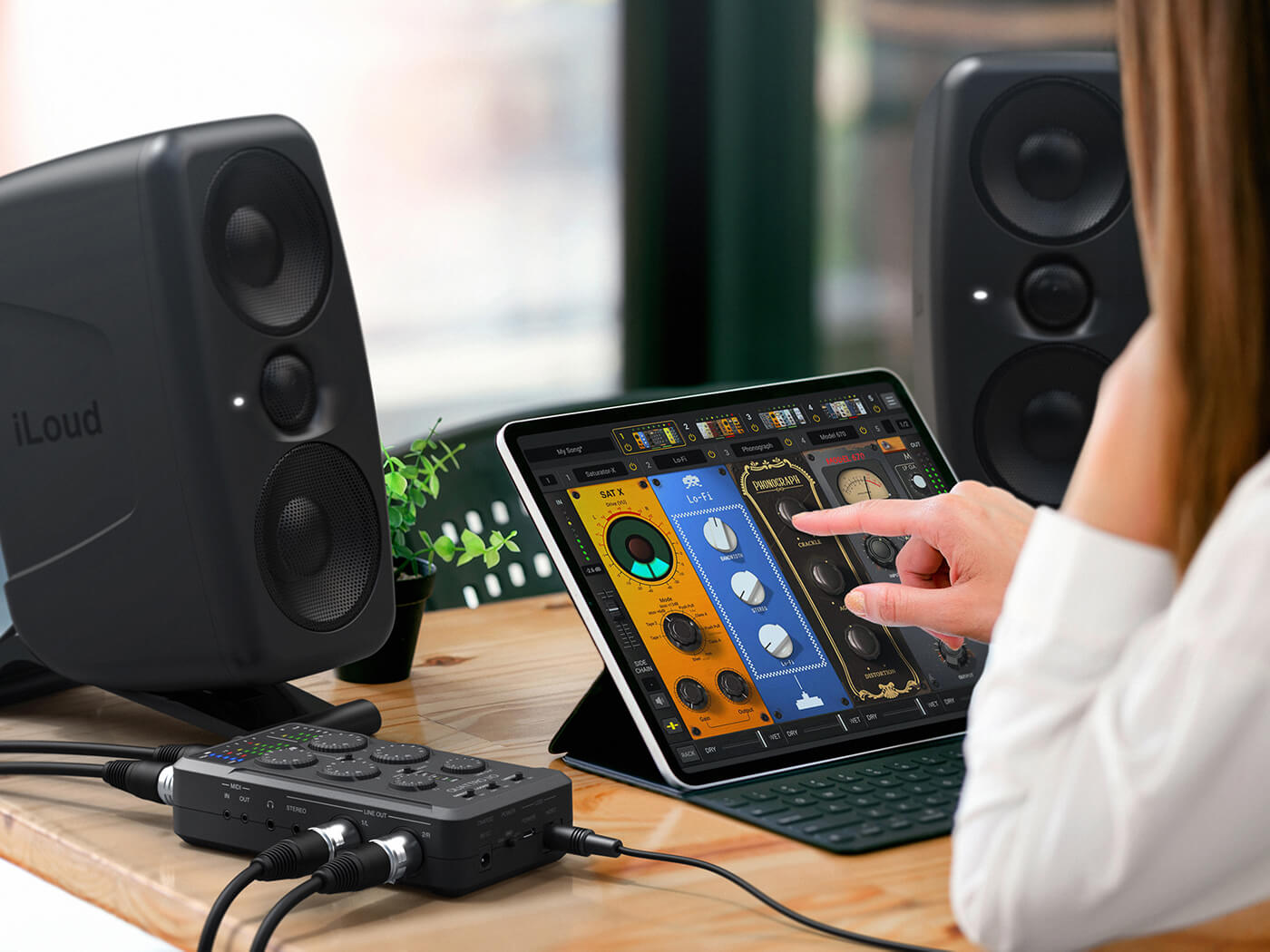