This long-running guitar amp simulator receives more than a fresh coat of paint for its fifth generation, rather a significant interface overhaul coupled with huge sonic advancements. 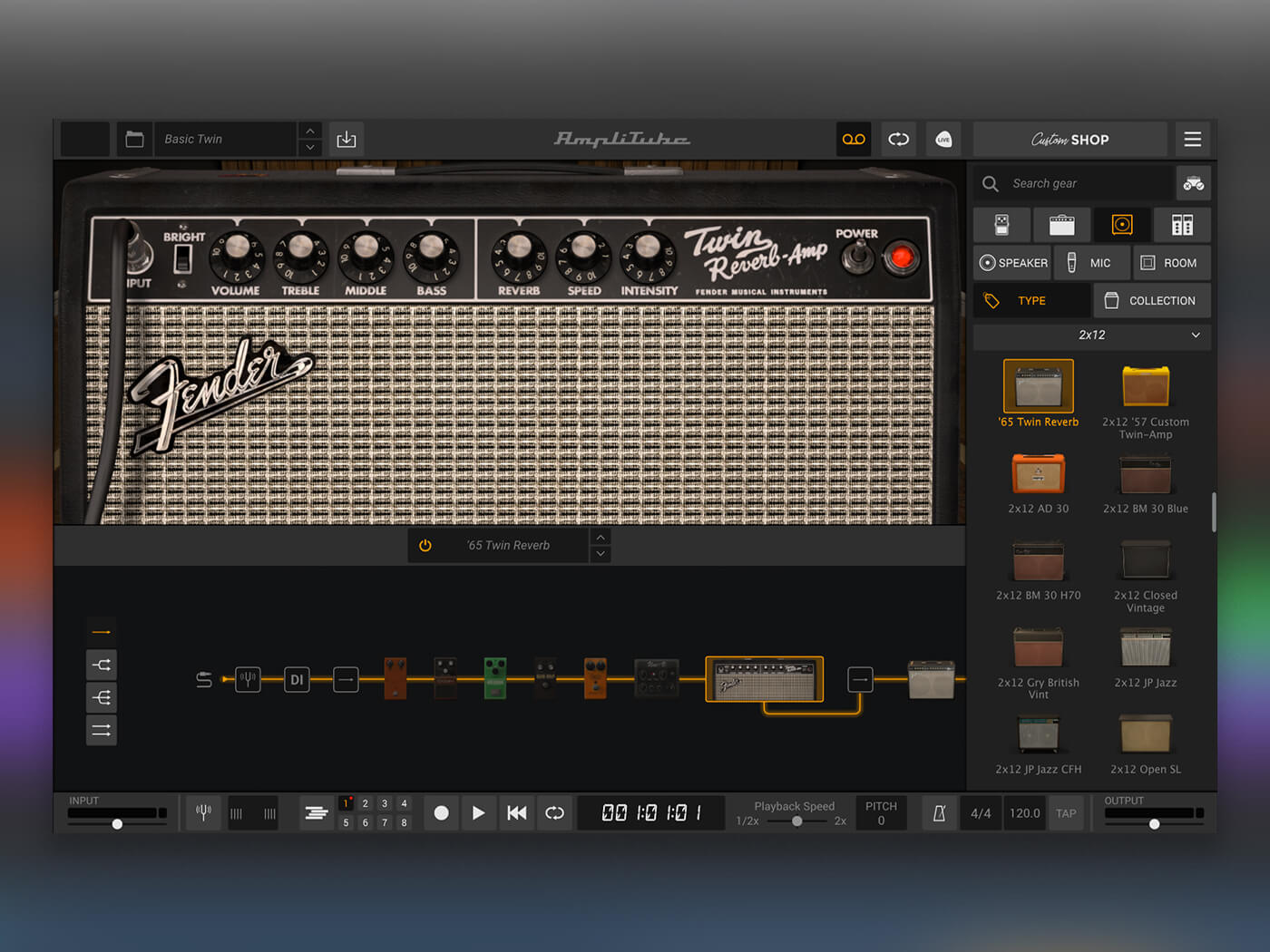 Amplitube 5 is that rare thing: an entirely worthwhile update. Easier and more fun to use, plus it sounds even better – hard to fault.

The fifth iteration of Amplitube is the most significant since its first revision around 15 years ago. The most apparent change served up by Amplitube 5 is the switch to a split-screen, drag-and-drop interface with the modules/gear above and the routing chain below. The ‘gear’ is now arranged by type and sub-category (clean, crunch, lead, etc.) in a sidebar to the right. The lower bar pulls together the input/output levels, tuner and sequencer related controls, doing away with the old input noise gate, which is no great loss.

Visually Amplitude 5 gets off to a great start. The interface appears less crowded, despite there being more control immediately available than before. Skeuomorphic representations replace drop-down menus for gear selection. To further this new sense of spaciousness, both the standalone and plug-in windows are user scalable, rendering many amp and pedal controls squint-free. To help keep the GUI tidy, you can filter the gear sidebar to only show items in your collection, saving unnecessary dialogue boxes and trips to the Custom Shop.

The drag-and-drop signal chain portion of the interface is where the real ‘at last’ comes in. It may have taken IK Multimedia some time to get here, but they have created a skilful balance of comprehensive visual feedback and simple, intuitive editability. 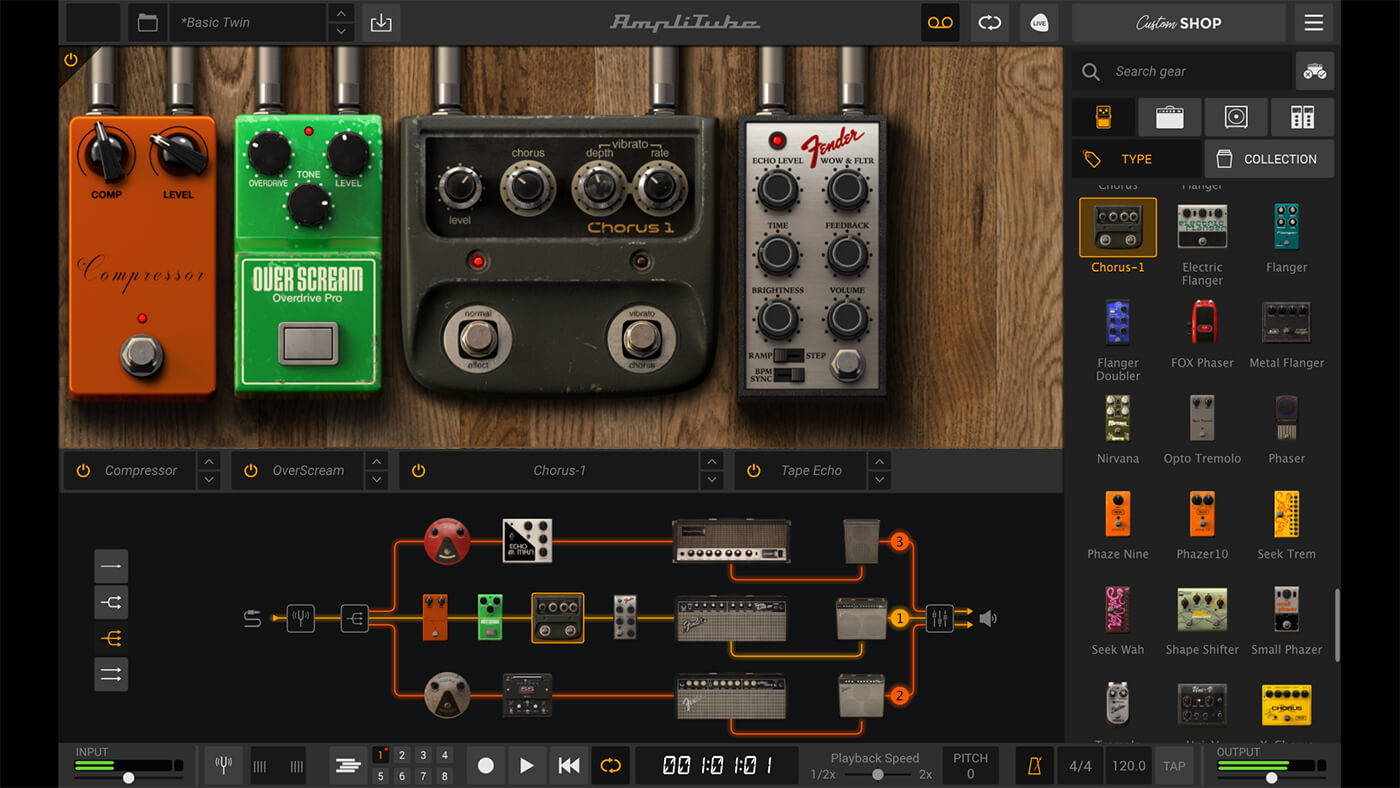 The previous versions’ set of eight routing combinations is replaced by four main chain types: single, two-way split, three-way split and (dual) parallel. As a new piece of gear is dragged into the chain window, the available cable destinations light up to guide the user.

You can drag rack effects to the amplifier to create an FX loop, the pre-cabinet splitter icon can be clicked to create a second cabinet route, and at the end of it all, the fader icon opens up the mixer window for balancing close mics, room mics and DI signal to the master fader. At first glance, I thought there were far more routing options than before, and though there are some extra possibilities, most of this impression is due to the improved visual representation. Amplitude 5 is a better looking, more efficient platform, but the changes are not just cosmetic.

The mixer for each amp still consists of two close mics, a pair of room mics and a bus fader, but there are now two effects insert slots per bus, plus two for the DI channel and six for the master bus. This is accompanied by an expansion of the rack effects roster, which are now displayed as faux 500-series modules and adapted from the T-RackS product line. Note that the gear available will depend on the package purchased, with the free Amplitube 5 CS (Custom Shop) version offering some basic, albeit excellent quality gear to get you started, all of which can be added to via the Custom Shop for a price.

One straight-up improvement is the tuner, now Ultra Tuner with its two modes: Easy and Advanced. The large, clear display is a boon for those using Amplitube live. At the same time, the advanced mode caters for tuning tweakers straying from Equal Temperament into the worlds of Phytagorean and Werkmeister III. 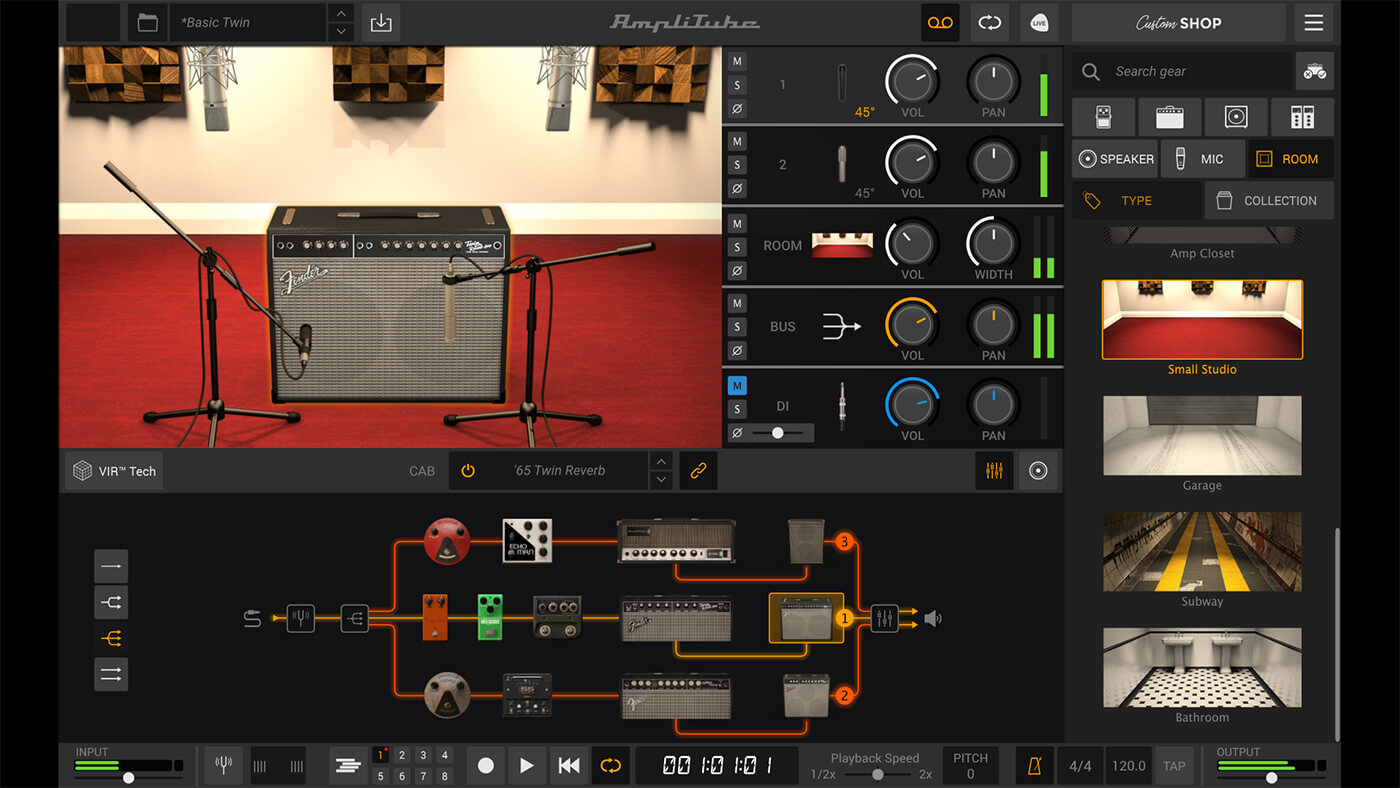 More significantly, the speaker and cabinet modelling see the addition of trademarked VIR Tech and a 45-degree close-mic angle option, which is a nice touch. VIR Tech (Volumetric Impulse Response) is a mic placement fine-tuning feature that uses an expanded IR (Impulse Response) library to shift the mics across a 2D plane and rotate around the circumference of the speaker, adding the third dimension. There is also an indication of how much bleed is coming from adjacent speakers. Though you won’t need to dive into this level of adjustment for every setup, it can make a significant difference for those that have the time to do so, as mics and speaker cones have a fickle relationship, even in the virtual realm. Though I have been happy with the previous placement system, this new addition is impressive and massively helps iron out the wrinkles in the mids and upper mids for high gain sounds.

Another improvement in Amplitube 5 is a redesigned power amp section. Whether it is due to this or the cumulative effect of numerous other enhancements, the sound quality has taken a jump up across the board. To ensure I wasn’t succumbing to some visual bias, I mimicked presets I have tailored in Amplitube 4 and compared them side by side. Amplitube 5 sounds better, fuller and more realistic, closer to my experience working with the actual pedal, amps and mics in my studio. It is not just the sound either; there is a behavioural component where the amps react more like their IRL brethren, allowing you to play the amp, as well as the guitar or bass. The sensitivity is noticeably improved throughout. From the input stage to the signal path interconnections, there appears to be more range and responsiveness and less tendency to encounter unwanted distortion, i.e. digital stage clipping as opposed to the good ‘modelled’ distortion.

We all have our tonal preferences, and the instruments we play help define them so I cannot comment on all the gear available within Amplitube 5, especially as it will depend on what you’re plugging in, but through exploring a vast range of the gear I have found some new favourites to work into my presets folder. 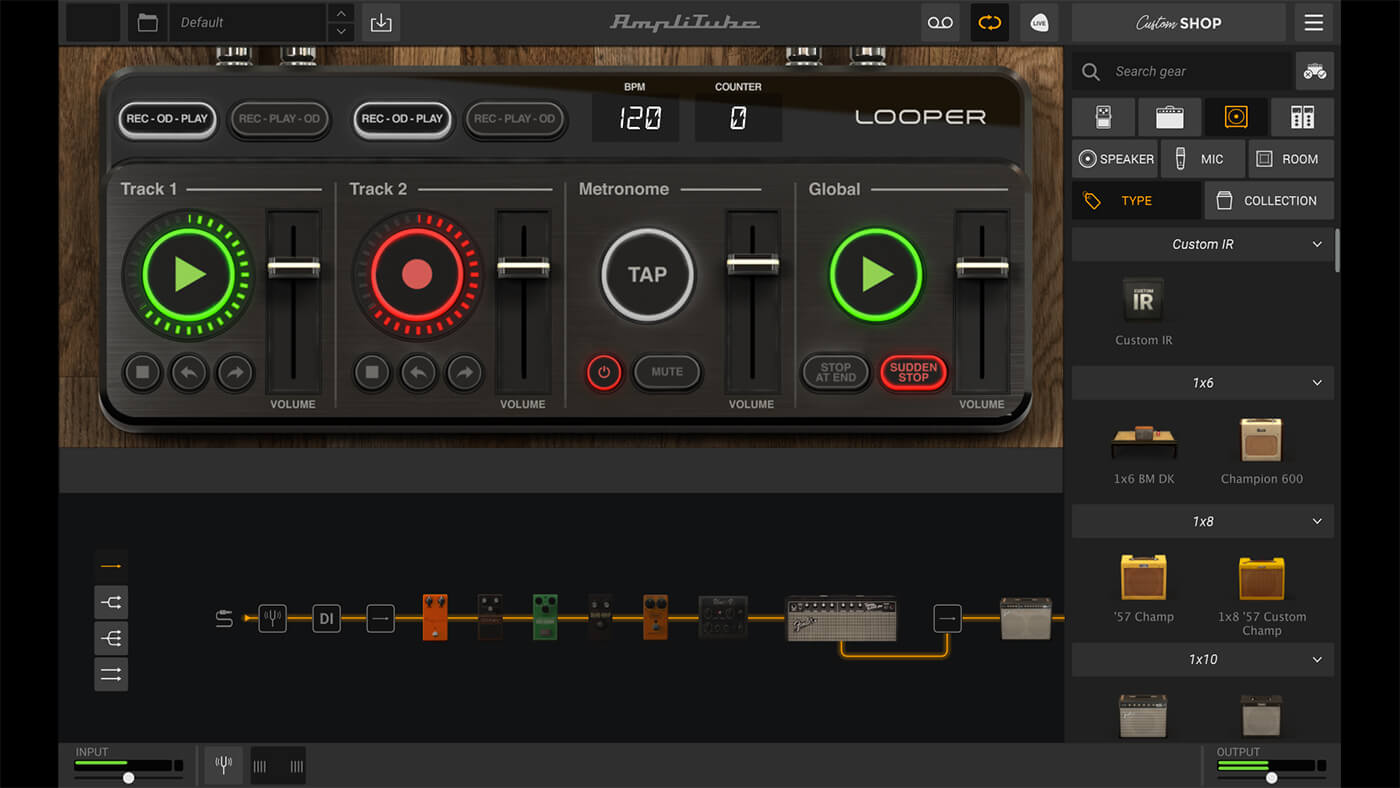 The pedals, amps and cabs aren’t all that Amplitude 5 has to offer. IK has slimmed down the Looper from four loops to two, closer resembling familiar pedal loopers. A few more controls accompany this refinement: controls for recording, playback and overdubbing modes, and tap tempo and overall levels.

User-assignable MIDI control of Amplitube has always made it a flexible tool in the studio and on the stage. Now, the Live mode creates a more direct link with the iRig Stomp I/O controller with the interface reflecting the pedalboard setup. Of course, the MIDI assignments mean you can also use any external controller. For DAW integration, you can assign any parameter to one of the 16 automation slots, all of which can be easily set, edited or removed. 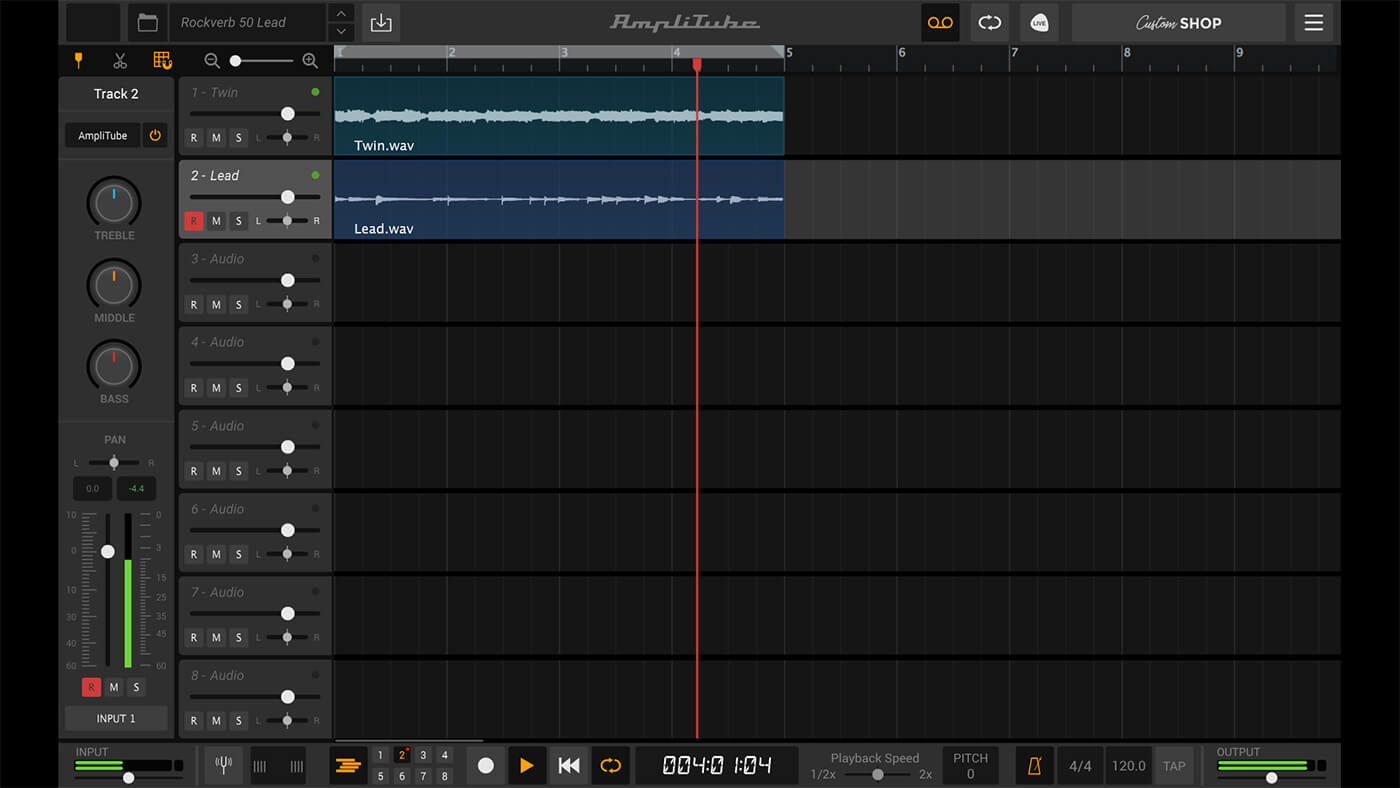 Amplitube has long had a recording facility, and in version 4, it became an 8-track DAW-style component. This has remained a sensibly simple component with just a few upgrades, such as audio clip duplication (as opposed to copy/paste), fade curve and clip volume adjustment. This is the only part where there is an undo/redo function, and though having split undo histories would be a headache, I’d much prefer an undo for amp building.

All in all, this is a significant update for Amplitude and one that is hard to fault. The refreshing GUI makeover allows for a more effortless, fulfilling user experience, which, coupled with the sonic improvements, makes Amplitude 5 a very attractive prospect for guitarists, bassists and producers alike. The three main packages are well worth the money, now more than ever.