Like a modern-day Frankenstein, Steinberg has been busy growing a brain to place atop its Backbone resynthesizer – and it’s created a monster. 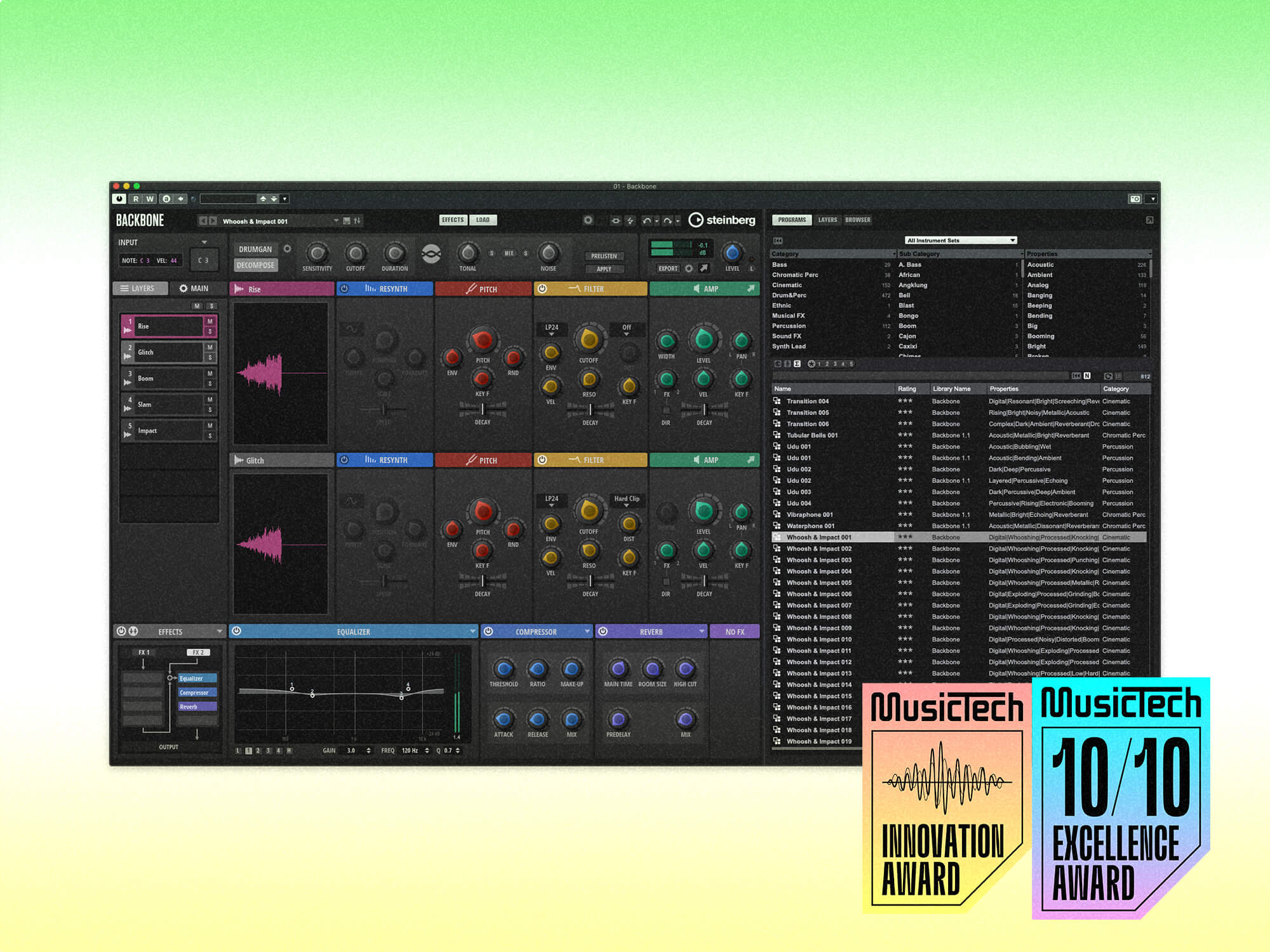 Backbone, Steinberg’s unique drum resynthesizer, impressed us upon release in 2020 – so much so that we awarded it 10/10. The newly released update, however, makes it even more impressive.

Backbone is designed primarily for creating drum and percussive sounds, but it can be harnessed in almost any way you can imagine. The plug-in provides eight layers, each of which can load a sample and process its timing, pitch and amplitude. These layers also have a built-in filter and, most importantly, a resynthesis module. This allows you to choose whether you hear the tonal or noise component of the source sample, and lets you modify the characteristics of that component – for example, shifting the formant.

As an alternative to the resynthesis module, Backbone also features an offline decompose processor that performs a similar function, splitting a layer’s sample into its noise and tonal components, saving these as new audio files, and assigning them to Backbone layers. The decompose processor offers a greater degree of control over the process than a layer’s resynthesis module. It also allows you to adjust the balance of a sound’s components, and makes it easy to mix and match the components of different source samples.

In most cases, you’d export your newly minted drum sound back to a standalone sample to use in a sampler or drum machine. But it’s possible to run multiple instances of Backbone and, although such a setup is fiddly (each drum trigger event has to be directed to its own Backbone instance), it allows for phenomenally deep real-time control over the timbre and character of your sounds. 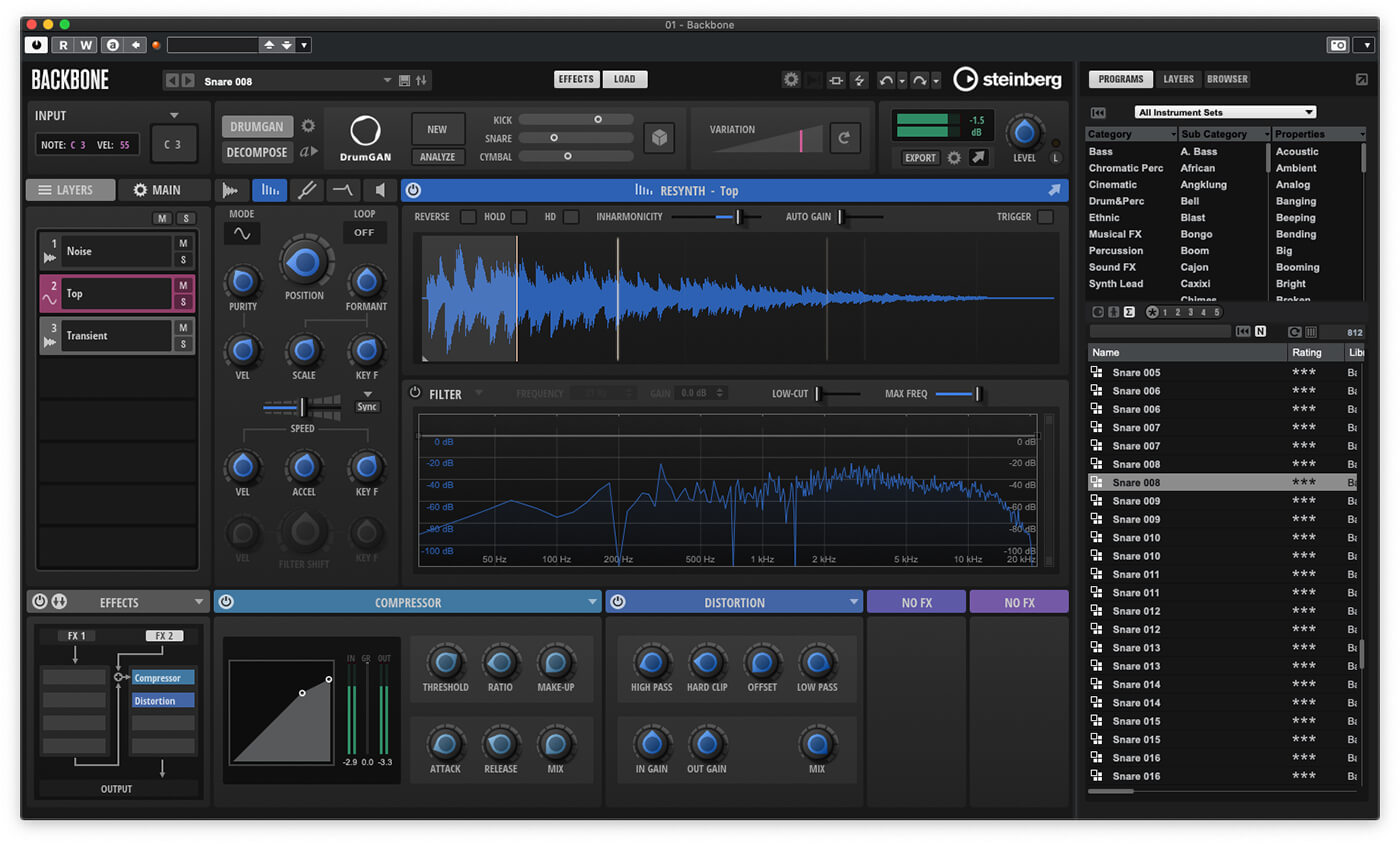 This new update lifts Backbone to version 1.5 and, while Steinberg typically charges a fee for its updates, this one is free for existing Backbone users. Does this imply that the update is an exercise in simply polishing what’s already there? Maybe. But that’s far from the case here. Sure, Steinberg has honed where necessary but the company has also made a major addition: DrumGAN.

Like Backbone’s decompose processor, this AI-driven tool is an offline process that acts on the currently selected layer. It was developed by Sony Computer Science Laboratories and uses a Generative Adversarial Network (GAN) that has been trained with a vast collection of kick, snare and cymbal sounds. The result is a processor that can modify and reimagine existing samples and, more impressively, dream up new sounds all by itself.

Before getting DrumGAN to do its thing, you have to tell it to either analyse the currently active layer or to create a new sound. Then you use the kick, snare and cymbal sliders to change the nature of the sound, increasing or decreasing the strength of each element.

For example, if after analysing a snare sample you crank the kick value to maximum and reduce the snare and cymbal values to zero, you’ll get a kick sound that contains characteristics of the original snare sample but that is still well and truly a kick drum. Turn up the snare and/or cymbal sliders and you’ll bring in different tonal and dynamic characteristics.

In addition to the kick, snare and cymbal sliders, DrumGAN also has a Variation Depth slider. Set in its leftmost position, this does nothing, and you’ll be able to hear characteristics of the original sample within the newly generated sounds. With increased variation depth, however, successive clicks of the Generate button will result in serious changes to the source sound, the degree of which can be governed by the position of the slider.

As you increase the variation depth, it becomes more difficult to hear any remnants of the original sample, which can result in many a happy accident when you use the Generate button. Best of all, you can still adjust the kick, snare and cymbal balance. With a bit of trial and error, you can create a set of drum sounds whose interrelationships should ensure they hang together well and are unique to your project.

The process is broadly the same if you begin by asking DrumGAN to create a new sound by itself – the only difference is that the source of the processing is DrumGAN’s imagination rather than an existing sample. Press the New button and you’ll be gifted an endless stream of wildly varied sounds – and that’s before you’ve even touched the sliders. To dive right down the AI rabbit hole, begin by having DrumGAN create a new sound before having it analyse that sound and create related variations. 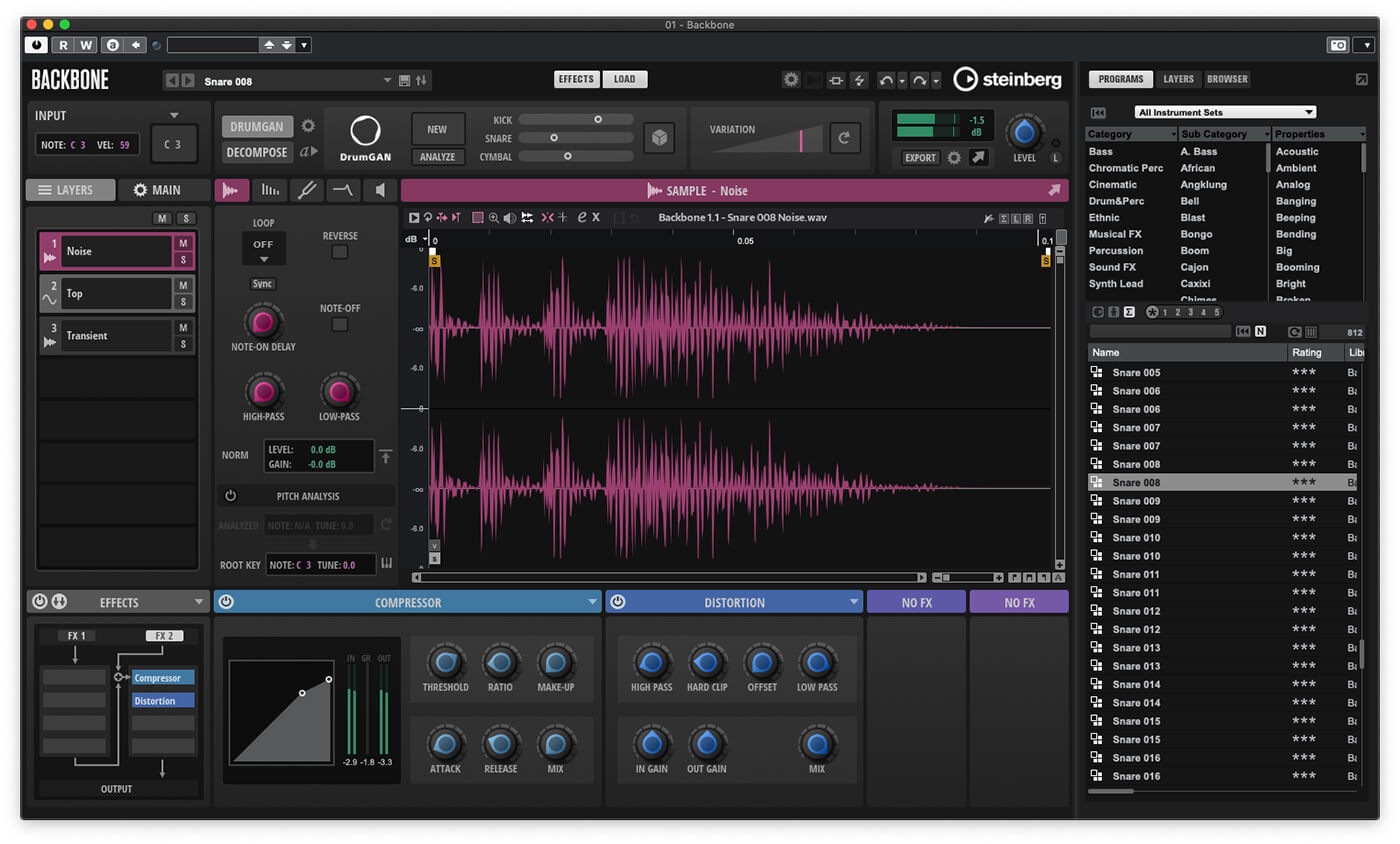 The only real downside is that none of this happens in real time. It takes a few moments for Backbone to process and apply changes. Being able to change the DrumGAN settings on the fly would be amazing, of course, but it would only serve as extra gilding on a lily that’s already drenched in gold.

DrumGAN is an AI tool. It isn’t SkyNet and it isn’t sentient. But consider that people spend hours, days, even weeks, hunting for and honing perfectly matched drum sounds, and here comes a plug-in that can do all that in mere moments. Backbone truly is a monster – thankfully it works for you.