Steinberg has provided some of music technology’s greatest innovations. With this new sampler-cum-sound design tool, its legacy looks assured. 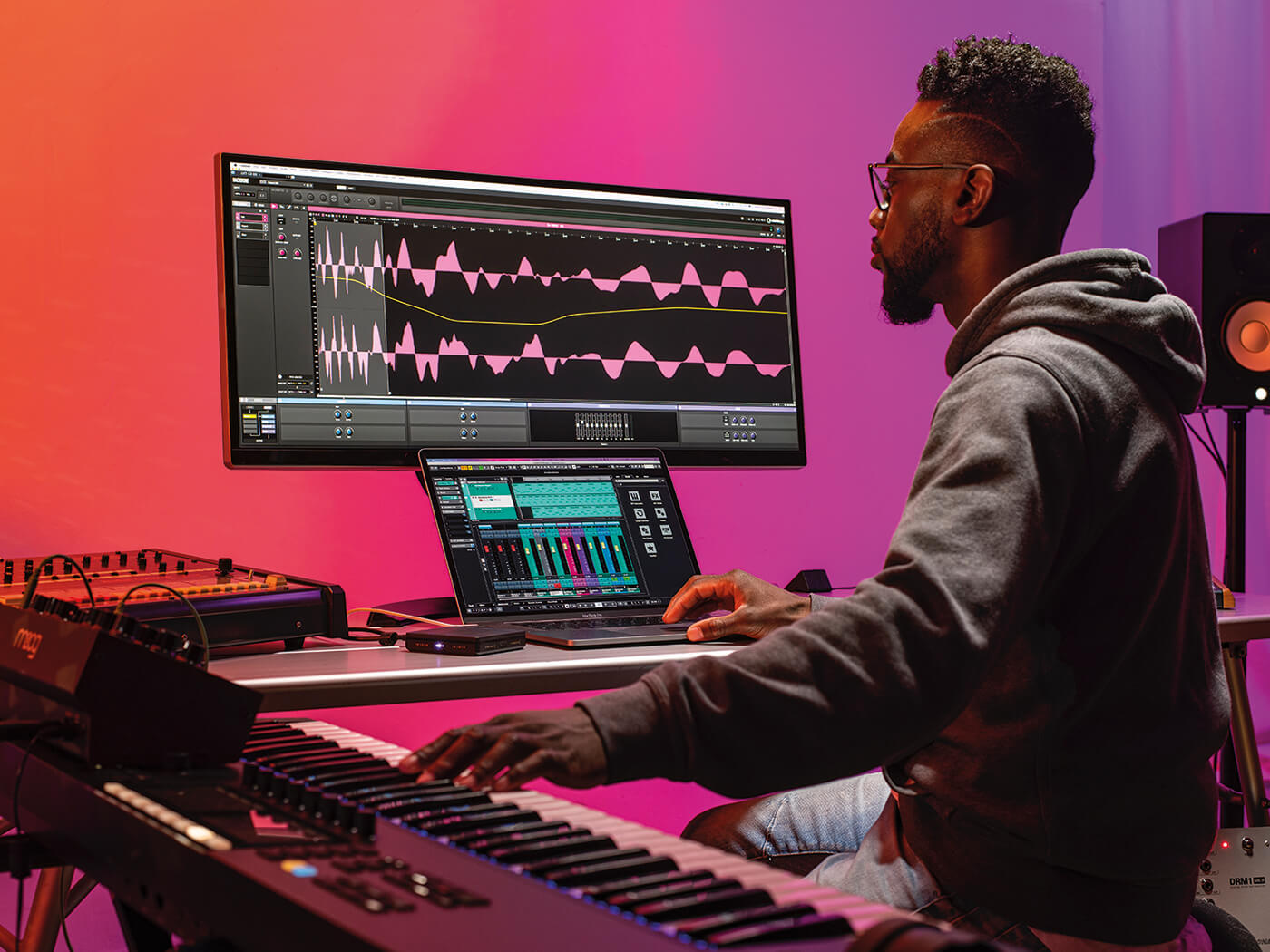 Hands up those of you who hoard samples. Don’t be shy. Now keep your hand up if the vast majority of your hoarded samples are drum hits. We thought so. The idea behind this hoarding, of course, is that by building up an extensive hoard of samples you’re more likely to be able find the perfect sound for any given situation. But how often do you find that, despite giving over gigabytes of storage to reams of marginally dissimilar TR-808 and 909 hits, you still have to edit, modify and resample your sounds to get them to really bed in to your track? Sometimes you wonder if it would be better to just create a custom sound from scratch. Thankfully, doing that just become a lot easier thanks to Steinberg’s new Backbone Drum Re-Synthesizer plug-in for VST3, AU and AAX compatible hosts.

In essence, Backbone is a sampler. But it’s not a conventional sampler by any means. This is geared towards creating drum sounds but it isn’t a drum machine and it can’t be set up to trigger different samples by playing different keys. What Backbone is, then, is a tool that allows you to create original sounds, with a particular emphasis on drum hits and one-shots. It does a good line in basses and sound effects too and, like any good sound-design tool, is only really limited by your own imagination.

Backbone programmes are made up of up to eight layers. Each layer hosts a single sample, which is processed in various ways – some more conventional and others less so – before being mixed with the other layers and the built-in effects processing. Once a sample is loaded into a layer, you have the option to use the Decompose tool to pre-process it. This separates the sample into tonal and noise components, allowing you to rebalance those components or use just one of them. As well as changing the tone-to-noise balance of an individual sample, the Decompose tool also means you can combine the tonal component of one sample with the noise component of a different sample loaded into another layer. 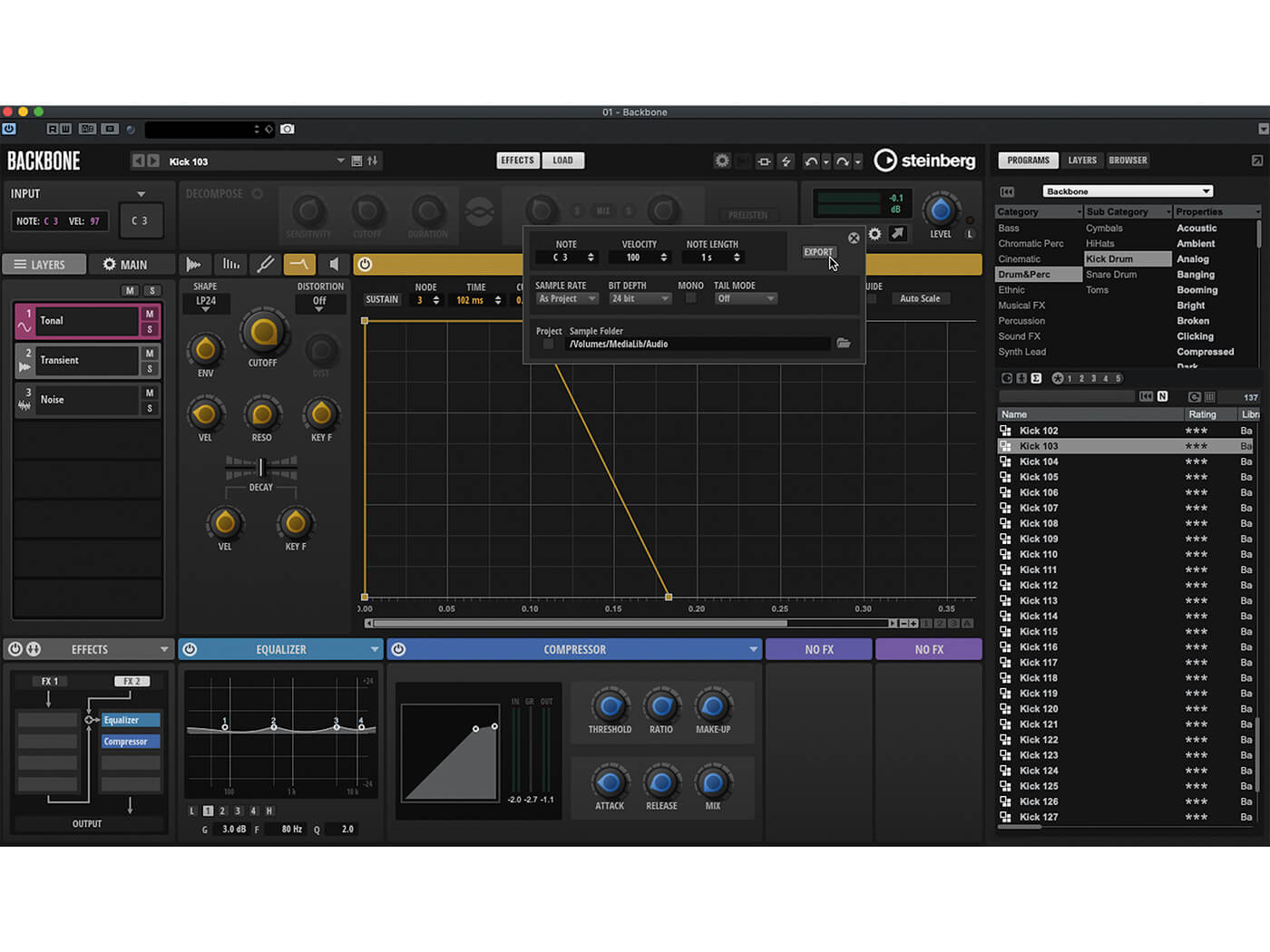 Whether decomposed or used as is, a layer’s sample is passed through a set of five processing stages. The first of these allows you to modify details of the sample itself: start and end points, loop type and points, sample fade in and out, and so on. There are also low-pass and high-pass filters, a note-on delay setting, and a switch that sees the layer triggered by note-off rather than note-on messages, which is great for rise and impact-type effects.

The next module, Resynth, separates the incoming sample into its individual frequency and overtone components, and resynthesises new sounds by manipulating those components. The module operates in one of two modes. In Tonal mode, the original spectrum of the sample is used. You can make adjustments to the tonal purity, which is similar to the Decompose tool’s ability to rebalance the tonal and noise components of a sample. You can also modify the prominence and inharmonicity of the sound’s formant. In Noise mode, the Resynth module uses the original spectrum of the sample to shape a white noise signal. This allows you to create new sounds based on the non-tonal components of a sample, and this works particularly well if driven by timbrally rich inharmonic sounds such as cymbals. In both modes, the Resynth module lets you change the overall sample length and modulate the sample playback speed independently of the sample pitch.

The remaining three modules bring proceedings back into more familiar territory, with stages for pitch, filter and amp. The Filter module has 24 filter models, grouped by type: low-pass, high-pass, band-pass, band-reject and all-pass. Each module includes a flexible envelope generator too: you can add as many nodes as you like to an envelope, and control the shape of the curve between nodes. The envelope display can also be switched to sync with your DAW’s tempo, ideal for drawing envelopes timed to the music.

Last but not least is Backbone’s effects system. The plug-in provides two effects buses, and each layer can send its signal
to either, neither, or a mix of both. Each bus feeds a chain of four processing slots. The two buses can run entirely in parallel or the output of bus 1 can be routed to any point in bus 2’s processing chain, allowing for different blends of serial and parallel. 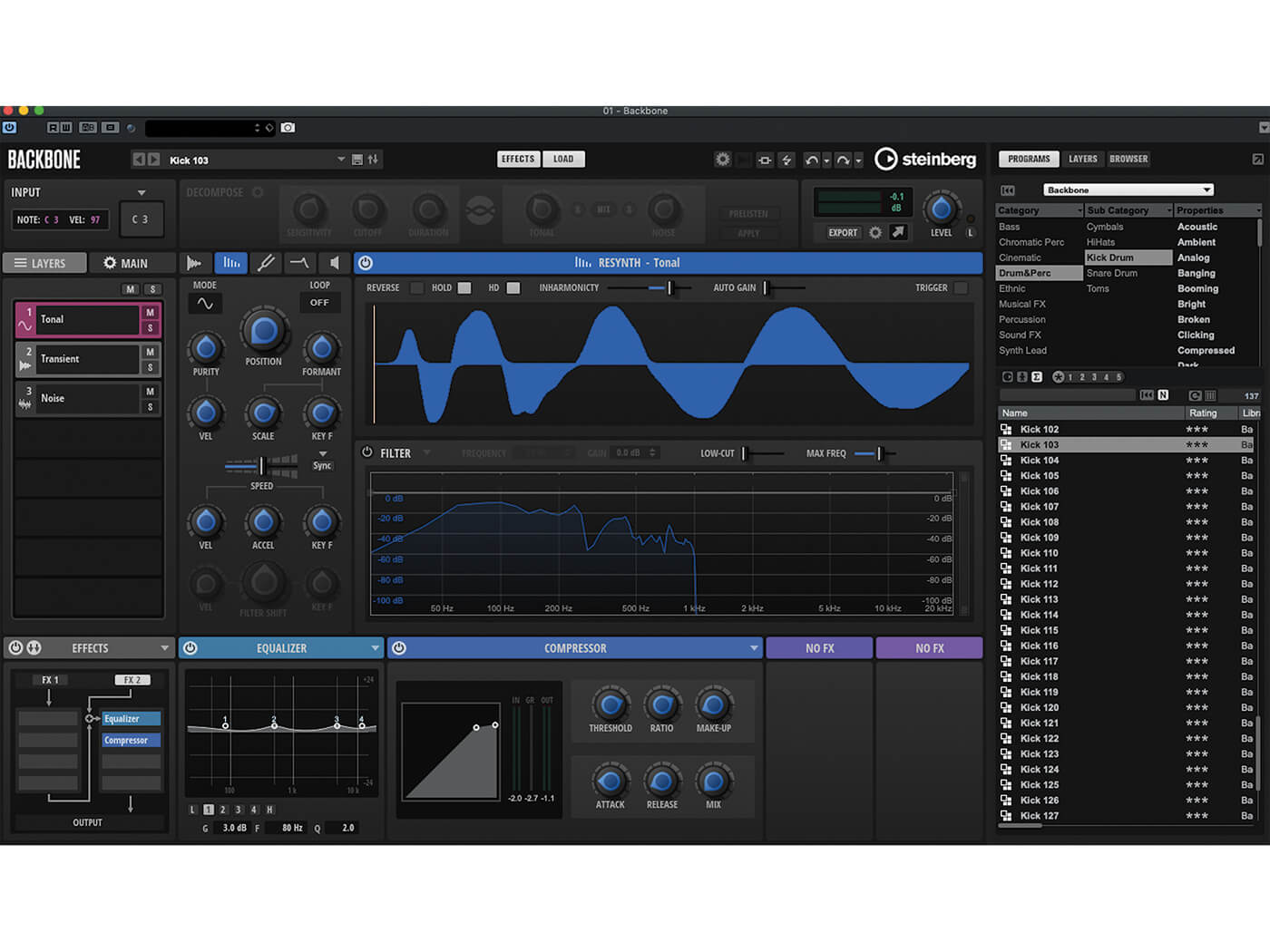 Describing Backbone makes it seem complicated and, under the surface, it is. But in practice, it’s easy to get to grips with. It has an intuitive layout, with layers listed to the left of a main work area. In the default view, the main area shows quick controls for the Resynth, Pitch, Filter and Amp modules for the selected layer and its following layer; clicking on one of these quick-control panels opens the module’s full edit page. These pages provide a lot of graphical feedback, of the waveform or of the module’s envelope, and this all adds to the ease of use. The Resynth module also includes a real-time spectrograph.

The engine is efficient too, so you should be able to run a few instances of it in order to create a full Backbone-based drum kit. But the idea is that, once you have crafted your perfect drum sound, you would export this as a new sample to import into a more conventional drum sampler, such as Steinberg’s Groove Agent or NI’s Battery. Backbone has an export button that makes this easy, and you can even drag directly from Backbone to your sampler or timeline to make it even more seamless.

The plug-in comes with an extensive library of programmes, layers and samples, and playing around with these is probably the best way to gain a proper understanding of Backbone and its processes. You will want to gain that all-round understanding too, because this is an astonishing and unique piece of software that could barely be better conceived. It provides a perfect tool kit for creating compelling, utterly original drum and percussion sounds and sound effects, and it can create these wonders from little more than the old samples littering your hard drive. 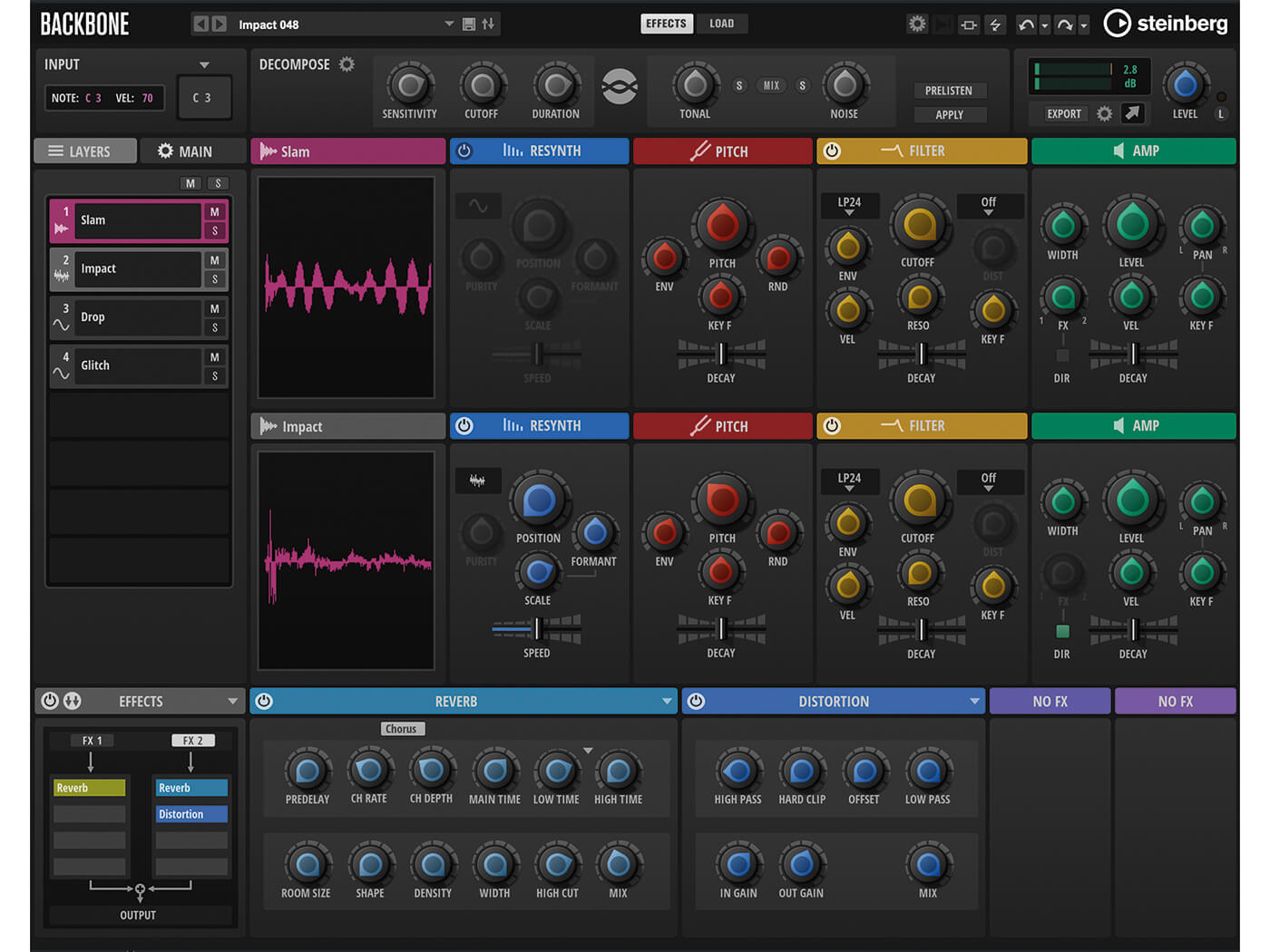 It’s tough to classify the usefulness of a tool as unique as Backbone. It’s very much a creative tool aimed at those who want access to something more than just the same-old stock of classic drum machine samples and resampled versions thereof. Of course, you don’t need a dedicated tool like Backbone to create your own drum sounds – a decent synth or two, a sampler, and a bit of time and effort will do the trick. What Backbone brings to the table is an entirely new way of going about drum sound design, an approach that allows you to blend different characteristics of different samples in different ways, while remaining quick, intuitive and fun throughout. There’s nothing like it, so be sure to try out the demo.

VPS Phalanx is a plug-in that offers its own particular approach to sampling. It provides 16 channels, each of which can host a pair of samples that can be blended and combined in a number of different ways. The plug=in comes with a large library of top-notch samples too.

This drum synthesiser from the makers of Fruity Loops is utterly devoid of samples, and there’re no oscillators in sight! Rather, Drumaxx uses physical modelling algorithms to create drum sounds based on the physical properties you dial-in. This is an entirely different way of approaching drum sound design, and it sounds great!