The biggest AKAI Mini controller gets more keys, physical control wheels and a standalone onboard sequencer for your MIDI and modular gear. Is there anything it can’t do? 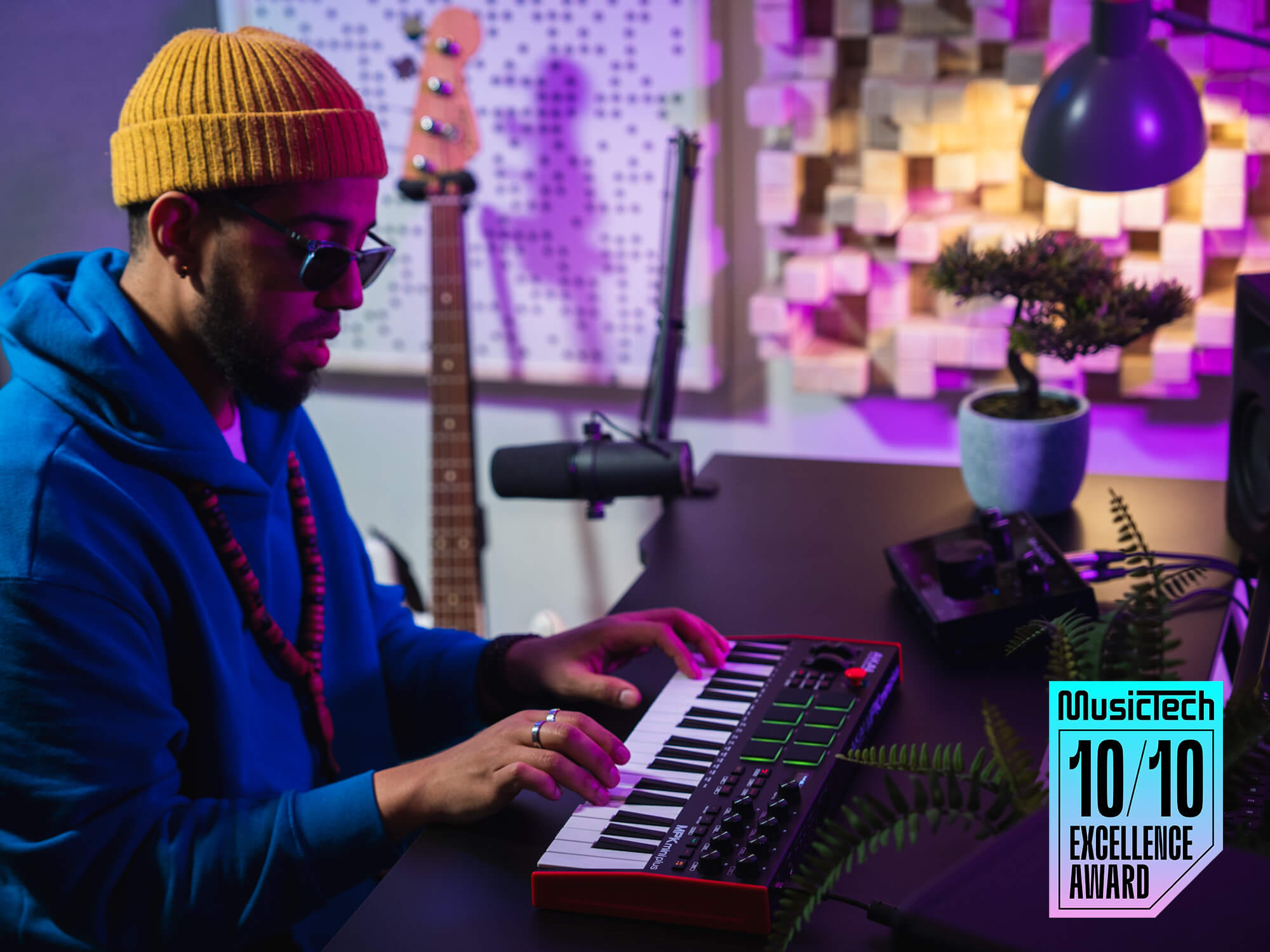 ⊖ Joystick could be fragile when in transit

AKAI’s MPK Mini family has found fans with a diverse range of musicians and producers from those needing to play and program on the move to those who just don’t want their gear taking up lots of space. The MPK Mini Plus expands on the Mini and Mini PLAY in a number of ways, the most obvious being its larger keyboard, fitting in 37 mini keys to their 25. But it’s also a much more expansive controller, with a bunch more ports and its own onboard sequencer making it capable of standalone MIDI and CV triggering as well as working with computer-based software. So what’s new?

The Plus is slightly bigger and heavier than its siblings but that’s not saying much since they are so small. Weighing 1.26KG and measuring 45 x 18 x 5 cm it’s sturdily built but still light enough to carry around pretty easily. Power and data are over USB, with a USB-B to USB-A cable included, a bit retrograde in a time when USB-C is becoming firmly established but having to use an adapter isn’t the end of the world. The rear panel has a sustain pedal input jack which is essential for any kind of expressive keyboard playing, as well as full-size 5-pin MIDI in and out DIN ports. There’s also CV Clock I/O and CV pitch, mod and gate output. Between all those you will be able to hook it up to any of your modular or other MIDI gear, using a USB power supply if no computer is involved. 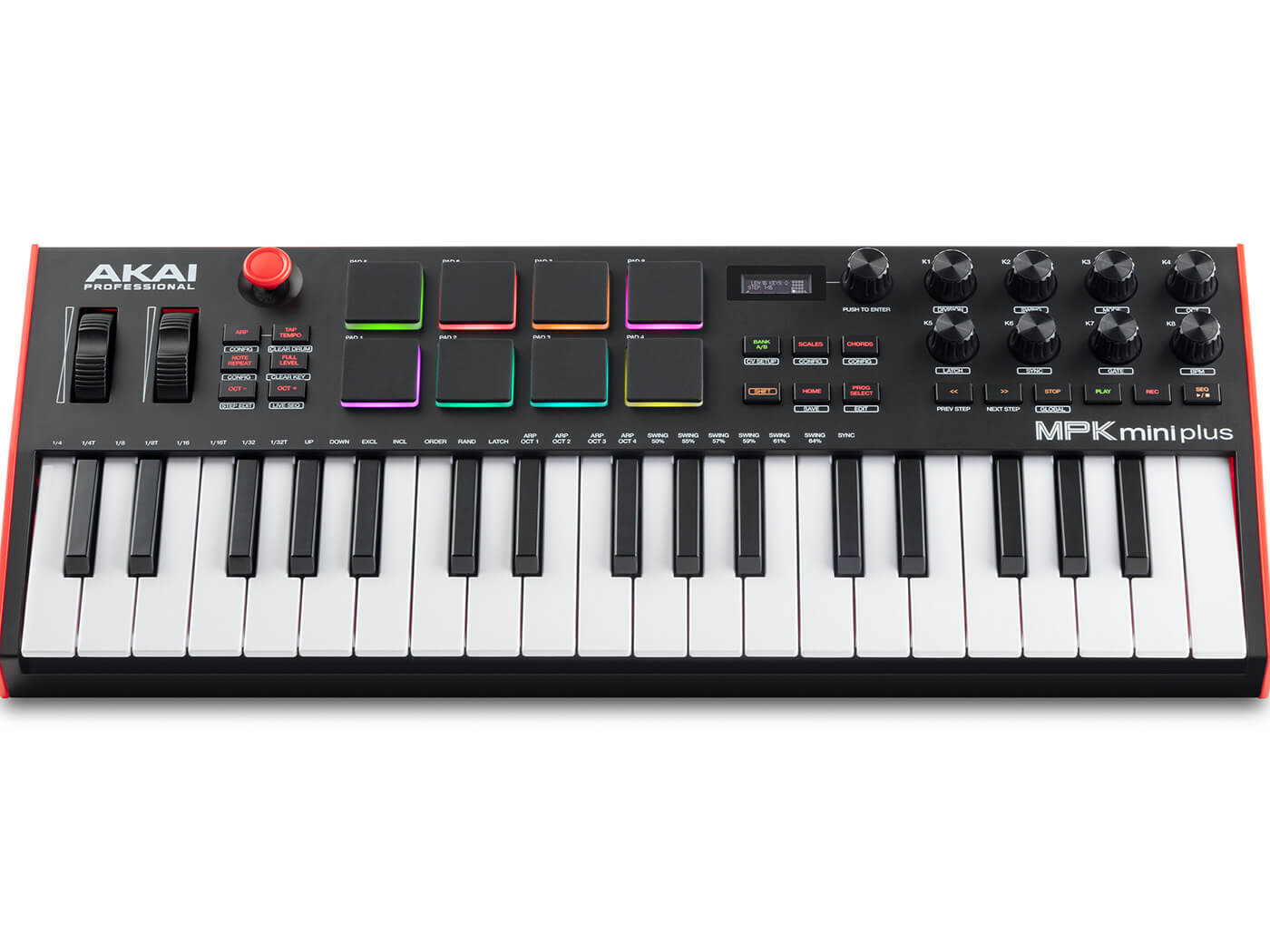 Something else that’s new is proper pitch bend and mod wheels – AKAI is selling this as a performance keyboard, so tactile wheels are a great addition. The keyboard is more accomplished than the unit’s size might suggest, too. There are 37 mini keys which use a ‘2nd gen’ dynamic keybed. These are surprisingly pleasant to play, reacting well even to more complex playing styles. It’s certainly light years ahead of what you used to get from small keys and feels like you’re sacrificing far less now when trading off portability for responsiveness. There’s 3 full octaves meaning two-handed chord playing is a reality, plus of course easy transposition as well as scale and chord modes that let you program chords to single notes and also ensure you never play an off-key note. 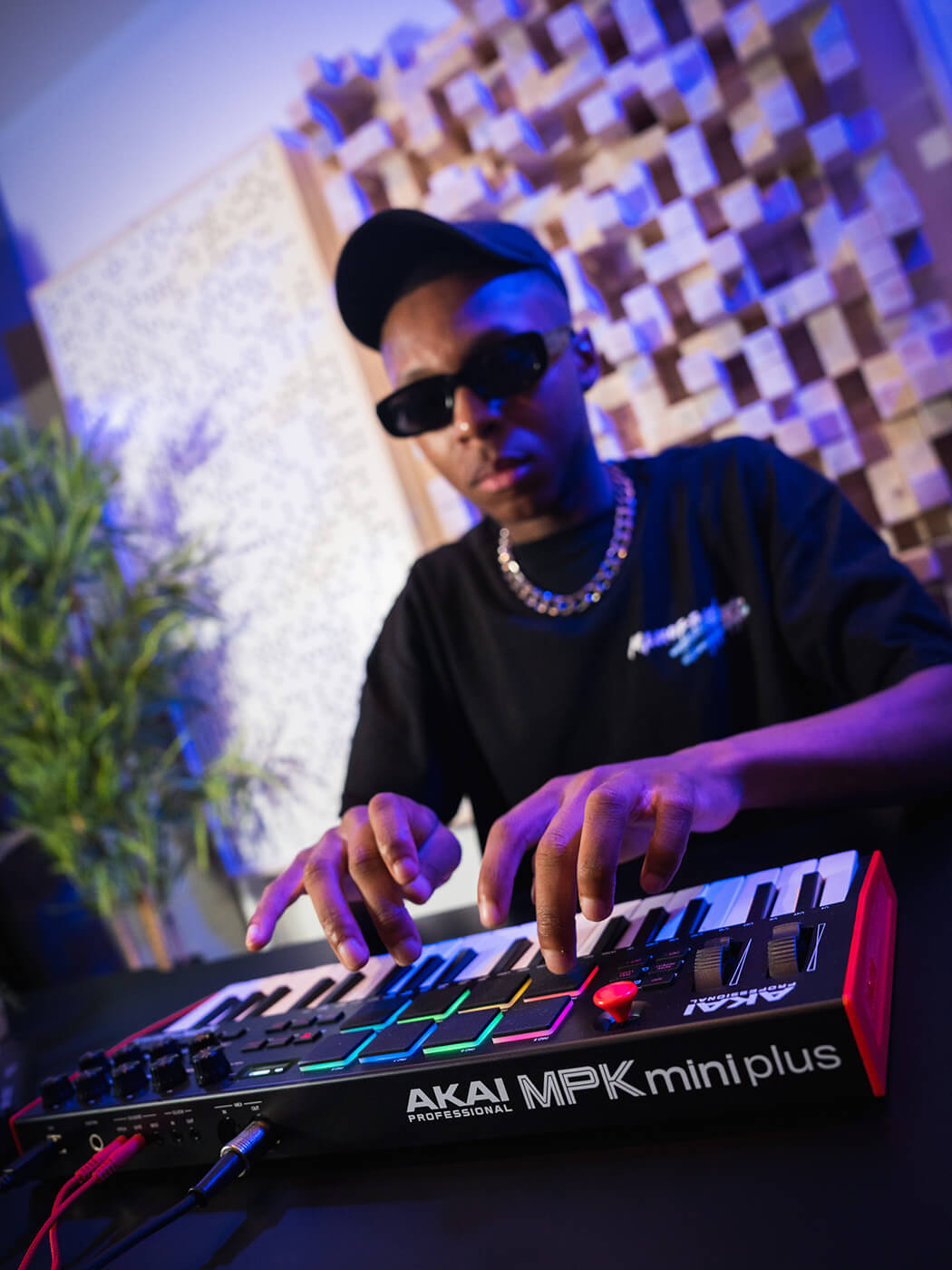 Plenty of other controls are at your fingertips, starting with the assignable X/Y joystick controller. This is probably the unit’s only physical weak spot, and you’d want to take care when transporting it. But it can have up to 4 parameters assigned to it for morphing between effects or filter settings for example. This is done using the keyboard’s own menus and its small but serviceable screen. You’ll spend a lot of time using the Shift control and the rotary knobs to enter data and though you will initially have to figure a few things out, in time it’s pretty straightforward to use and you’ll develop a bit of a muscle memory for it.

The 8 assignable endless rotary knobs can control anything from filters to panning and automation and under these you’ll find Transport controls, with maps for all major DAWs available in the keyboard. There are also 8 real MPC drum pads, backlit and velocity sensitive that work not only as a creative surface for playing drums but also as program change and other MIDI CC triggers. As in the other MPK keyboards these are great fun to use. 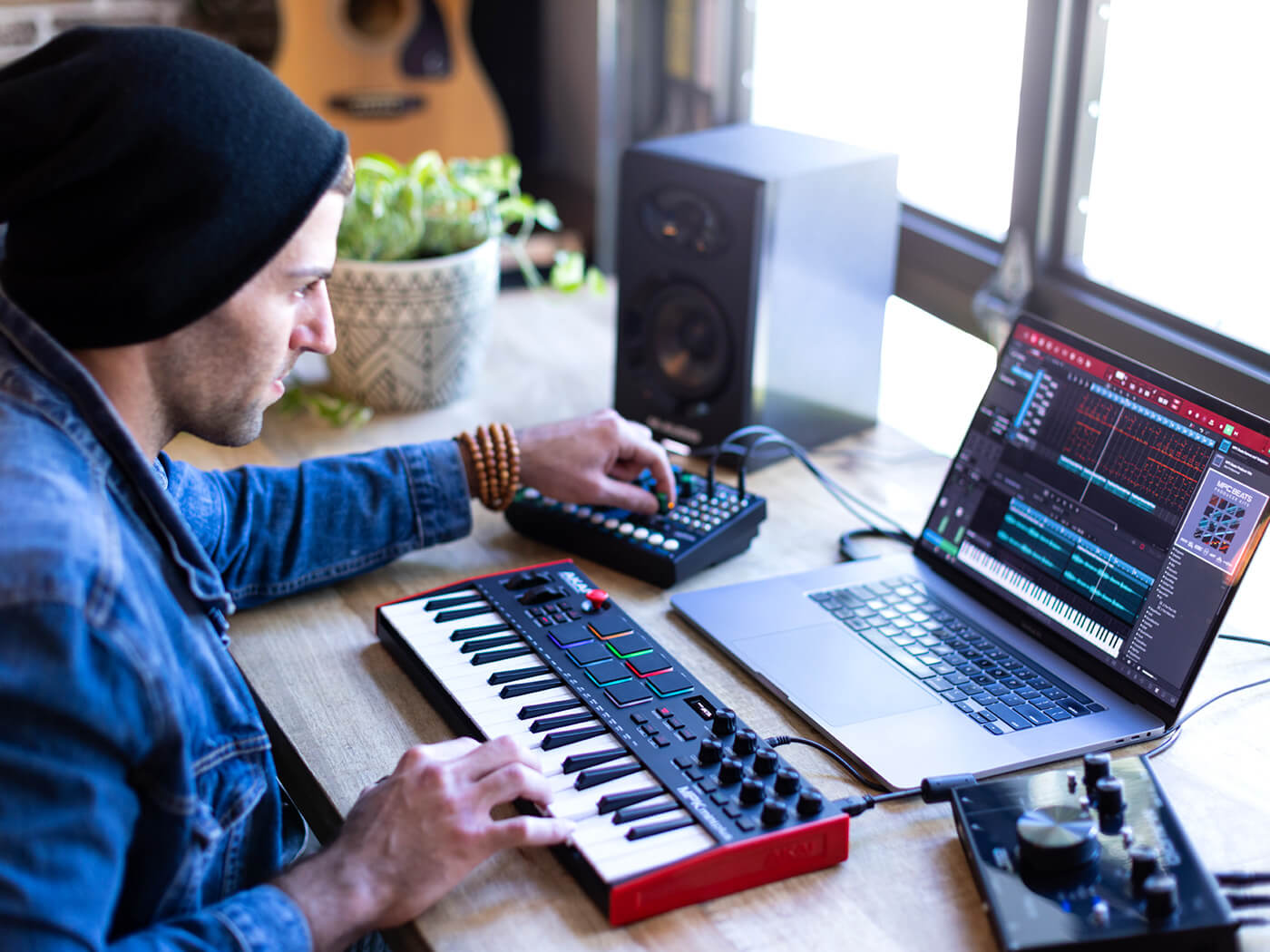 Another part of the Plus’s evolution over other MPK Mini family members is the inclusion of an internal sequencer to add to the arpeggiator section. Activated and controlled via the knobs and screen, using the polyphonic 2-track step / live sequencer feels like stepping back in time – in a good way. There are plenty of people who find a tactile approach to sequencing suits them better and is more creative than just clicking dots on a screen. Indeed, the proliferation of older-style sequencers on modern hardware has been a feature of recent years.

Here you can program melodies and drum patterns on the fly with no computer connected, using 8 notes of polyphony per step and 16 notes per drum step. There’s auto-quantize with a range of settings including MPC Swing and the whole thing has a great vibe to it. There’s something freeing about programming this way, like people did before everything was done in software. Of course that’s entirely supported as well, and you get the MPC Beats software as part of your purchase, an AKAI-friendly DAW that’s built around the company’s controllers. It comes with a bunch of samples and really complements the workflow on the Mini and indeed other AKAI gear. There’s also a 6-month subscription to Reason+ thrown in. 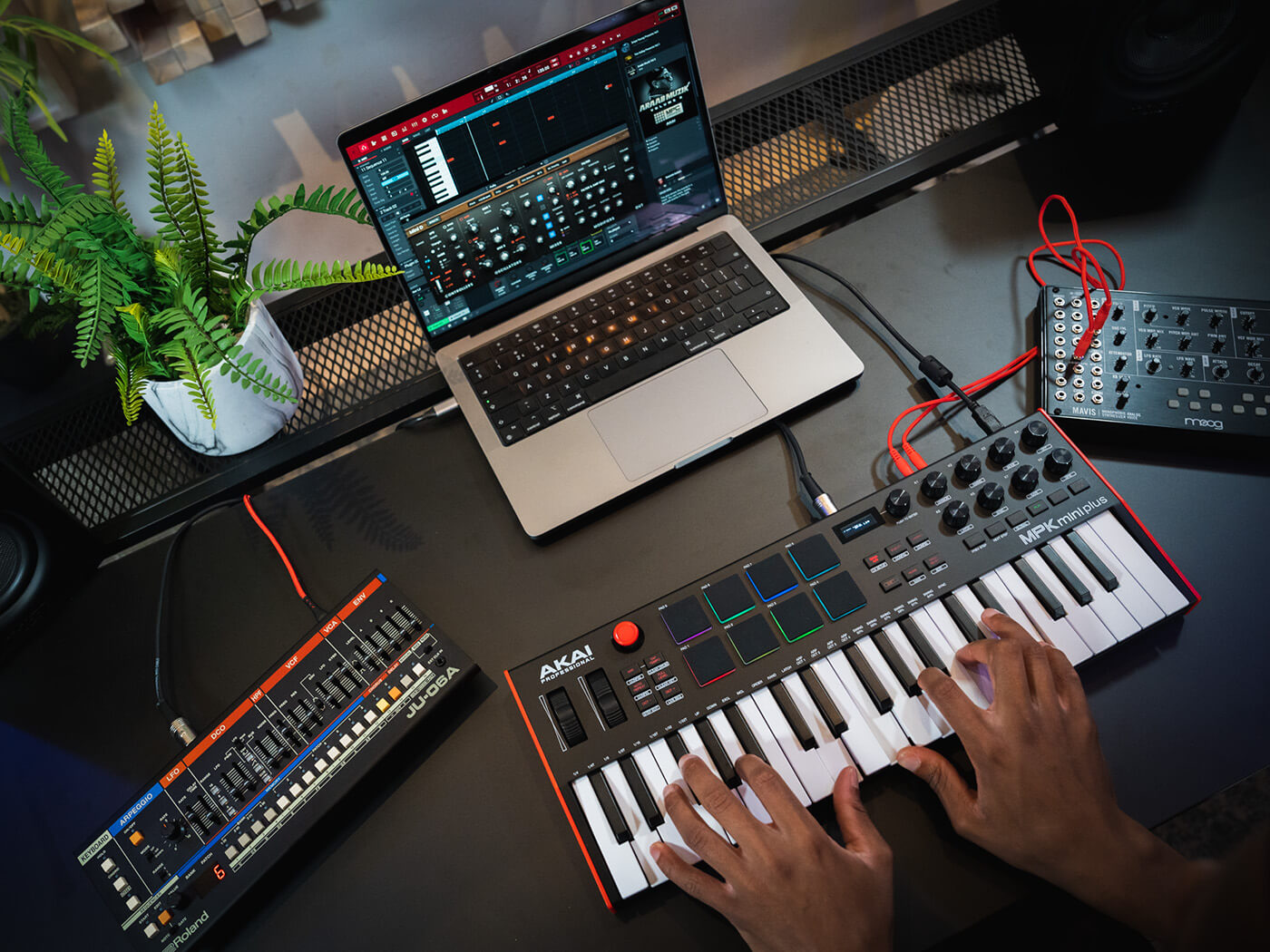 The MPK Mini Plus is a superb controller, especially considering its price. It takes the classic MPC drum pads and DAW and computer integration of other MPK models and throws in Keystep-like functionality including the CV ports for hooking up modular gear and the onboard sequencer meaning the whole thing can be used entirely without a computer if required. The keyboard is more responsive and playable than it has a right to be, and the 37-key design and option of using a sustain pedal enable creative playing as well as simpler synths and beats stuff.

It’s bigger than the Mini Mk3 but still supremely portable and doesn’t waste an inch of space. Whether you want to work in a more old school way with the onboard sequencer or do DAW control and triggering on a computer – or some combination of the two – you’ll find that the Plus makes it easy to do. It’s possible to use it as a musical sketchpad and a super-compact studio controller, just as flexible with standalone live sequencing as it is with DAW control. It might well replace several boxes on your studio desk. 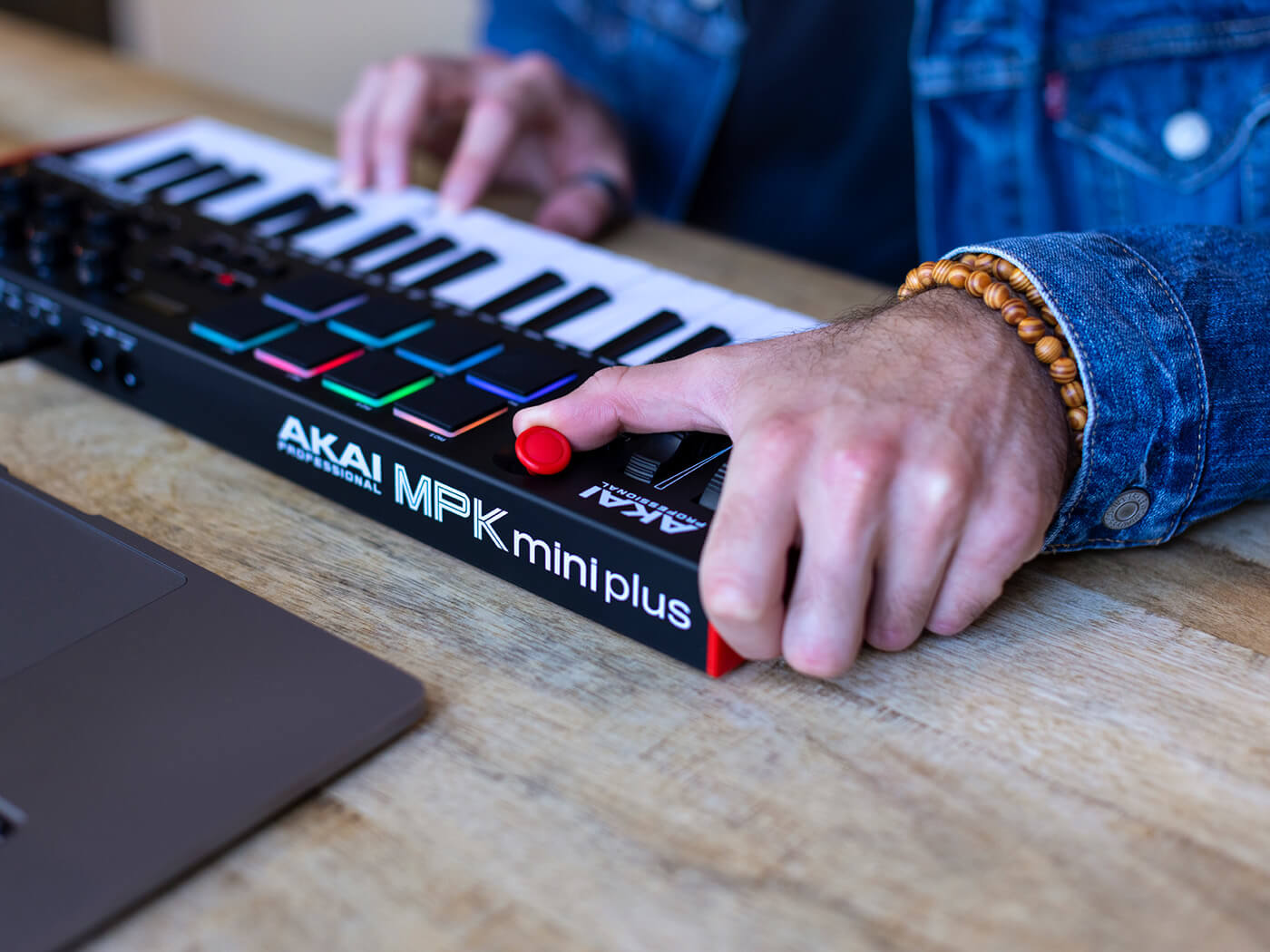