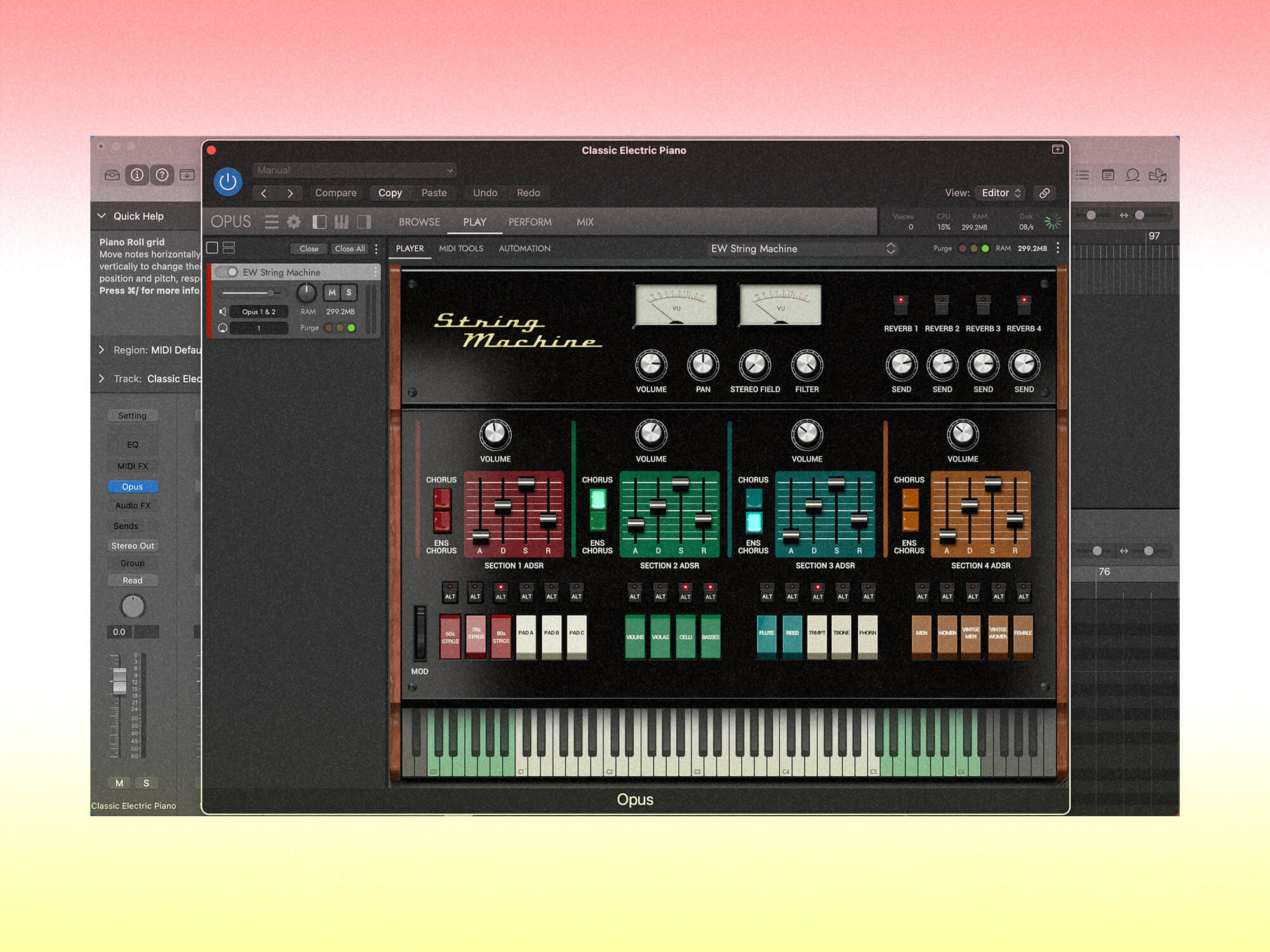 Few sounds conjure up a musical era quite like synthesized strings. From the 60s to the 80s, these specialised synths – known as string machines to their fans – became an essential ingredient in the sound of popular music. Though the hardware is long-since past its heyday, music lovers and creators alike just can’t stay away from those lusciously cheesy chords – which is why the latest offering from EastWest comes as such a pleasant surprise.

Capturing the essence of iconic instruments like the ARP Solina and the Oberheim OB-X, veteran sound designers Nick Phoenix and Doug Rogers are bringing plenty of retro vibes to the table – but this is more than a mere trip down memory lane. Originally an offshoot of EastWest’s impressive FORBIDDEN PLANET instrument, String Machine balances nostalgia with 21st century functionality to deliver a solid addition to the company’s growing range of synthesis libraries – but can they justify its hefty price tag?

Open up the instrument and you’ll be greeted by a deliciously retro, and refreshingly uncluttered, user interface. If you prefer your software synths crammed with expansive control options, this instrument may feel a little simplistic at first, however, String Machine’s minimalism is a strength, providing a fast and uncomplicated path into a rich collection of sounds. Should you wish to push things into more complex territory, EastWest’s generally excellent Opus player provides plenty of options for adding and controlling audio and MIDI effects.

The body of the instrument is broken up into four colour coded sections, the first of which houses the eponymous string machines. The 60’s, 70’s, and 80’s samples live up to their namesake with effortlessly vibey and authentic timbres, while the analogue pad sounds are satisfyingly rich. However, the real power of this instrument doesn’t come from the vintage samples in isolation, but from the modern orchestral and choral samples that accompany and combine with them. Beautifully recorded brass, woodwind, acoustic strings, and choir can be layered in by clicking an old-school push button, instantly thickening and enriching the texture. The vocal section, which features male and female choir and solo female, sounds particularly gorgeous in combination with the string machine samples.

Each section gets its own volume envelope and volume control, and the mod wheel has been hardcoded to crossfade between sound layers and dynamics – a feature which, as EastWest points out, brings a level of nuance and expressivity to the sound that wasn’t possible on the original hardware. When it comes to global effects, there’s volume, pan, a stereo widener, and four stackable reverbs of varying lengths to glue everything together. There’s also a nice sounding filter whose cut-off frequency can be controlled from the main page, but if you want to fine-tune any further parameters, you’ll need to head over to the Opus player’s Mix page.

All told there are twenty sound sources which can be mixed and matched together simultaneously to create a formidable wall of sound. Additionally, each source comes with an ‘alt’ button, allowing you to switch between to a second synth timbre, performance technique, or, in the case of the choral section, vowel sound. Layering, blending, and shaping these sounds is a very satisfying process and in a surprisingly short timeframe, you can get bold, emotive textures that feel classic yet current. In fact, the sound feels eminently relevant and suitable for a number of modern musical genres or film soundtracks.

Second to the samples themselves, the nicest feature is perhaps the chorus and ensemble chorus effects which can be toggled on for each individual instrument section. Modelled off the Roland VP-330 and the ARP Solina, the effects sound wicked, with an authentically vintage tone that helps bridge the gap between the hardware and instrumental samples. There’s also a ‘modern’ chorus setting accessible from the Mix page should you want to give a clean and detailed finish to the sound.

There are 17 instrument presets bundled with String Machine, a number which, by today’s standards, stands out as quite small. To be fair, the highly functional UI and slick-sounding samples mean that it’s really very easy and fun to make your own presets – something that EastWest encourages in both the user manual and marketing materials. On the other hand, many users count the number and variety of ready-to-go presets as a key consideration – and on this count, String Machine feels a little underwhelming. That being said, the included presets are of an undeniable quality, showcasing both the classic sounds of yesteryear and more modern sound palettes.

Viewed as part of the Composer Cloud+ subscription, String Machine is the very definition of added value – further fleshing out the recent push into synthesis and keeping EastWest out in front as one of the best all-round sample libraries. However, remove the instrument from its subscription context and the picture is less rosy. At its non-sale price of $299, it becomes very hard to recommend this release, especially given that you can snag the excellent UVI String Machines 2 library for a third of the cost.

Despite being overpriced as a standalone purchase, String Machine stands out for two simple reasons: it sounds superb and it’s fun to use. The library’s unique combination of vintage hardware samples, high-definition acoustic samples, and modern expression controls ultimately results in something quite special and very useful – so long as you’re already subscribed.