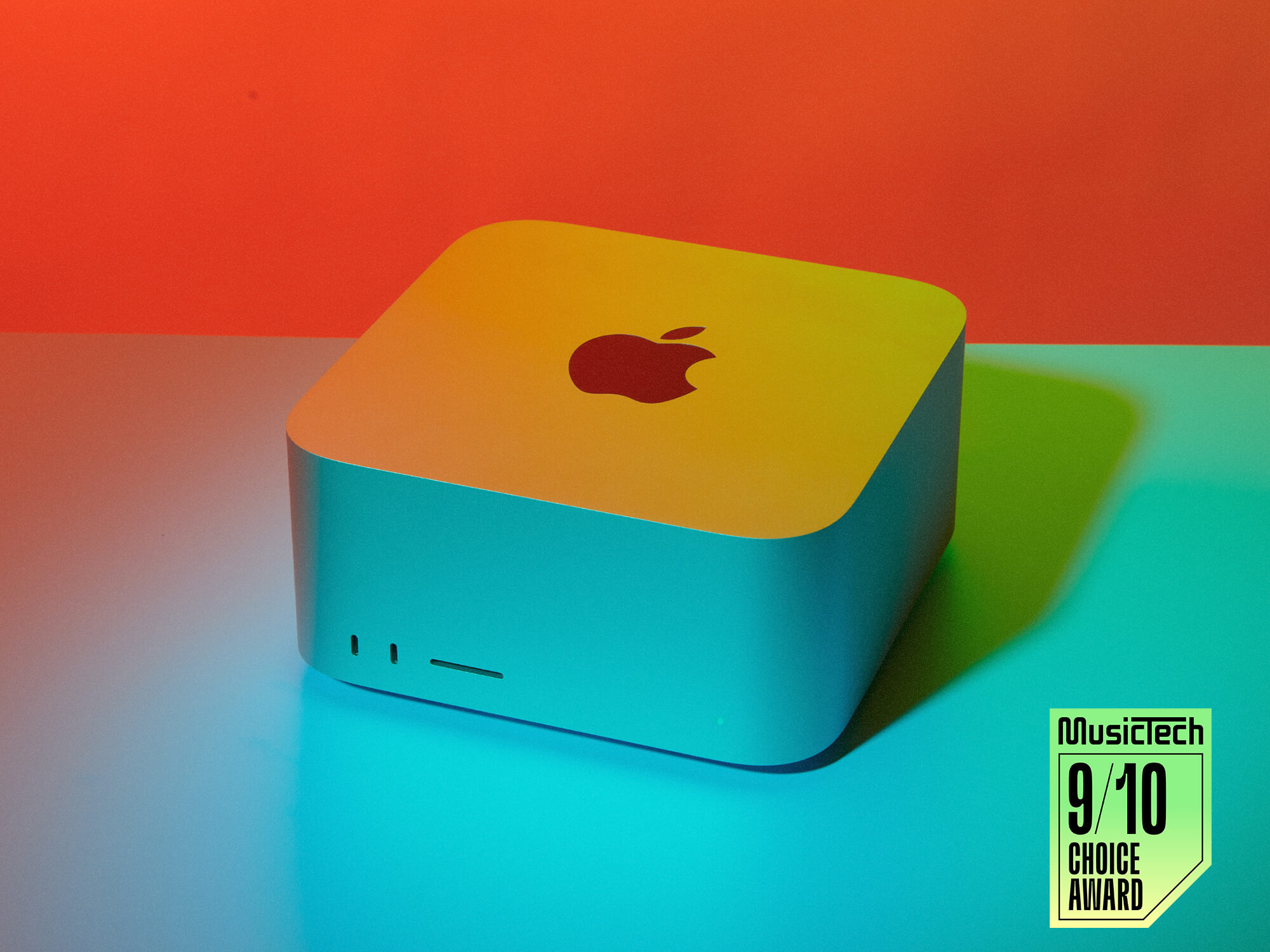 Apple’s powerhouse new Mac aims to be a workhorse for all kinds of creatives. But how well does it cater to audio producers?

⊖ RAM and SSD upgrades get pricey very fast
⊖ Fans are quiet but on more than expected, albeit at a low level

In the run-up to its launch, Apple kept the Mac Studio under wraps in a way that’s almost impossible with its iPhones, subject as they are to frenzied speculation across the consumer tech press. The Mac Studio, however, is a more creator-focused machine and is therefore relatively niche, even within the Mac lineup.

Mac represents a much smaller slice of Apple’s gargantuan profits than the iPhone and the company’s services arm. Pro-grade Macs have long been the choice of many creative professionals, and that’s something the company is willing to devote considerable resources to maintaining.

The Mac Studio name has arrived with intent. It is the Mac for creatives – musicians, photographers, filmmakers, designers and even coders that want the desktop experience, more ports, and need to go beyond what the current iMac can do. The iMac is a beautiful machine for less demanding users but tops out at an eight-core standard M1 and 16GB of RAM. The Mac Mini too is fine for everyday users, but lacks the grunt the Studio offers.

The Mac Studio starts at £1,999 and boasts promising specs. You get the Mac and a power lead but have to add your own keyboard, mouse or trackpad, and screen(s).
The base model Mac Studio is an excellent solution for creators, with an M1 Max chip packing 10 cores, a 24-core GPU and 16-core Neural Engine and 32GB of RAM. Upping the RAM to 64GB will cost £400, which is worthwhile if you can stretch to it given that it’s not user-upgradeable. The standard 512GB storage seems stingy and, while this can be upped to 1TB for £200, 2TB will cost £600 and the full 8TB is a staggering £2,400.

Considering the fast Thunderbolt I/O on offer, you might consider going with less internal storage and adding a large, fast external SSD for data for less money.
Then there’s the processors. A second M1 Max variant is available with an additional eight GPU cores, making for a total of 32, for an extra £200. For graphics work, this would be a sensible upgrade but for audio work, it is an unnecessary added cost since audio processing doesn’t make much use of GPU cores and is instead reliant on CPU.

Then, of course, there’s the M1 Ultra option, which effectively doubles everything thanks to Apple’s UltraFusion technology joining two Max chips together so that they appear to the system as one. The M1 Ultra comes with a 20-core CPU, 48-core GPU and 32-core Neural Engine for £3,999, boasts 64GB memory as standard and can be boosted to 128GB for £800. The top-end version adds another 16 graphics cores for an extra £1,000.

Our review model has an M1 Max chip with 48 GPU cores rather than the M1 Ultra, but also has 64GB RAM and a 4TB SSD drive.

Broadly speaking, it’s close to the spec that a serious audio producer might be looking at. You could skimp on the GPU cores and not shell out for the 4TB of storage to save on costs. On the other hand, if you want top-end performance, you could stretch to the M1 Ultra and effectively double your speed.

If you’ve used an Apple Silicon Mac, you’ll know that their general speed and snappiness are superb and far superior to the last Intel Macs. Start-up and app launching are blink-and-you’ll-miss-’em quick.

Running Geekbench 5, our machine records a single-core score of 1,725 and a multi-core of 11,488, comfortably beating the late 2020 Mac Mini (7,418) and the 27-inch Intel iMac (8,236). For those unfamiliar with Geekbench, it is an app that tests and ranks the power of a device’s CPU against a baseline score of 1,000, which is the power of an Intel Core i3-8100. In short, a higher score indicates a more powerful processor – if a processor’s score is double that of a competing processor, it will be twice as powerful.

Oddly, when we tested the M1 Max in the MacBook Pro in 2021, we got a higher multi-core score of 12,469. Geekbench tells us its app measures the Studio correctly, so it’s not quite clear why there is this discrepancy in the multi-core score. On paper, the only difference is that the Studio’s system-on-a-chip has more GPU cores.

Running the same Logic Pro benchmark projects from music-prod.com as we did on the MacBook Pro, we start with a project containing 128 channels of Sculpture, each with a full set of insert effects, at 64 samples audio buffer.

The performance meter on the Studio hovers at about 50 per cent. Duplicating all 128 tracks just for fun for a total of 256, this changes to about 75 per cent. A second project runs 30 instances of U-He’s power-hungry Diva synth, which shows 60-70 per cent usage on Logic’s performance meter.

Since our last review, Steinberg has released Cubase 12, which is native to Apple Silicon, so we fire up a few Cubase Pro 12 demo projects. There aren’t super-stress test projects but rather real-life music projects containing about 80 tracks – a mixture of audio, virtual instruments, plug-in effects and automation.

The Studio handles these without registering higher than 10 per cent on Cubase’s performance meter, and it’s able to batch export 79 individual tracks as WAVs with all inserts included in under a minute – a phenomenal feat.

Machined from aluminium, the Mac Studio is a work of art, somehow unobtrusive yet eye-catching at the same time. The rear panel contains most of its connectivity, with a power socket and a 10GB Ethernet port. Four Thunderbolt 4 ports run at up to 40GB/s and support DisplayPort as well as USB4 and USB3.1, and there are a further two USB-C ports on the front of the Max version running at up to 10GB/s – on the Ultra these become faster Thunderbolt 4 ports. Both models have an SDXC UHS-II card slot on the front, handy for photo and video card transfer.

Returning to the rear panel, you get two USB-A ports and an HDMI-out that supports multichannel audio output. A 3.5mm headphone socket is included but would’ve been more convenient on the front panel. There’s also a built-in speaker, which is adequate but certainly more functional than impressive.

Though the form factor is the same, the Mac Studio M1 Max and M1 Ultra models have different weights thanks to the larger cooling system of the M1 Ultra.
Other recording artists have expressed dissatisfaction with fan noise. Here’s our take on the issue as far as our Max model goes (we weren’t able to test an Ultra): unlike the M1 Max MacBook Pro, which runs more or less silently until pushed – and even then remains pretty quiet – the fans on the Studio are on at a very low level from the moment the machine is turned on. A gentle stream of cool air is pushed out of the rear grille even when idling.

Surprising as this is, there are a few qualifiers to note. The first is that the idling fan noise is very low in volume, and not likely to interfere with recording unless your mic is a few feet from the Mac. If you’re recording in a space where noise as low as this is going to be a problem, you’re probably picking up birds and traffic noise too – we recommend some studio insulation.

The other interesting thing is that, even when under sustained load with all CPU cores consistently maxed out, the fan noise barely rises at all. The air being pushed gets warmer but the fans barely get above a whisper. So is there a small amount of fan noise? Yes. Is it a problem if you’re careful about recording? No. And it’s lightyears away from the jet engines that kick in when this reviewer’s Intel MacBook Pro gets stressed.

Apple’s M1-powered Macs and M1 Pro/Max portables are excellent machines for many creatives. The Studio gives you a desk-based system to which you can add your own screens – several of them and at high resolution if you like – and with the M1 Ultra, up to 128GB RAM and 8TB internal storage if you’re willing to pay for them. While that (ridiculously fully loaded) package would take you to a hair short of £8,000, audio producers can get what they need for considerably less. Consider the essentials for music-making – CPU cores and RAM – and worry less about the upgraded GPU options.

Our M1 Max Mac Studio’s performance is not dissimilar to the MacBook Pro we reviewed in 2021, unsurprising given that it also had an M1 Max and 64GB RAM. But the Studio offers more variations of core counts, though largely in terms of the GPU, with the Ultra option doubling the specs.

The Mac has always been more than just a computer to creative users. It’s the heart of your workflow and something you’re proud to have on your desk rather than just a tool that does a job. The Mac Studio ticks all the right boxes when it comes to aesthetics but, more importantly, it’s a powerhouse where it matters, running as many tracks and plug-ins as you can throw at it without breaking a sweat.