Apple silicon finally comes to the full MacBook Pro lineup. But do these new machines offer a compelling reason for musicians and producers to upgrade? 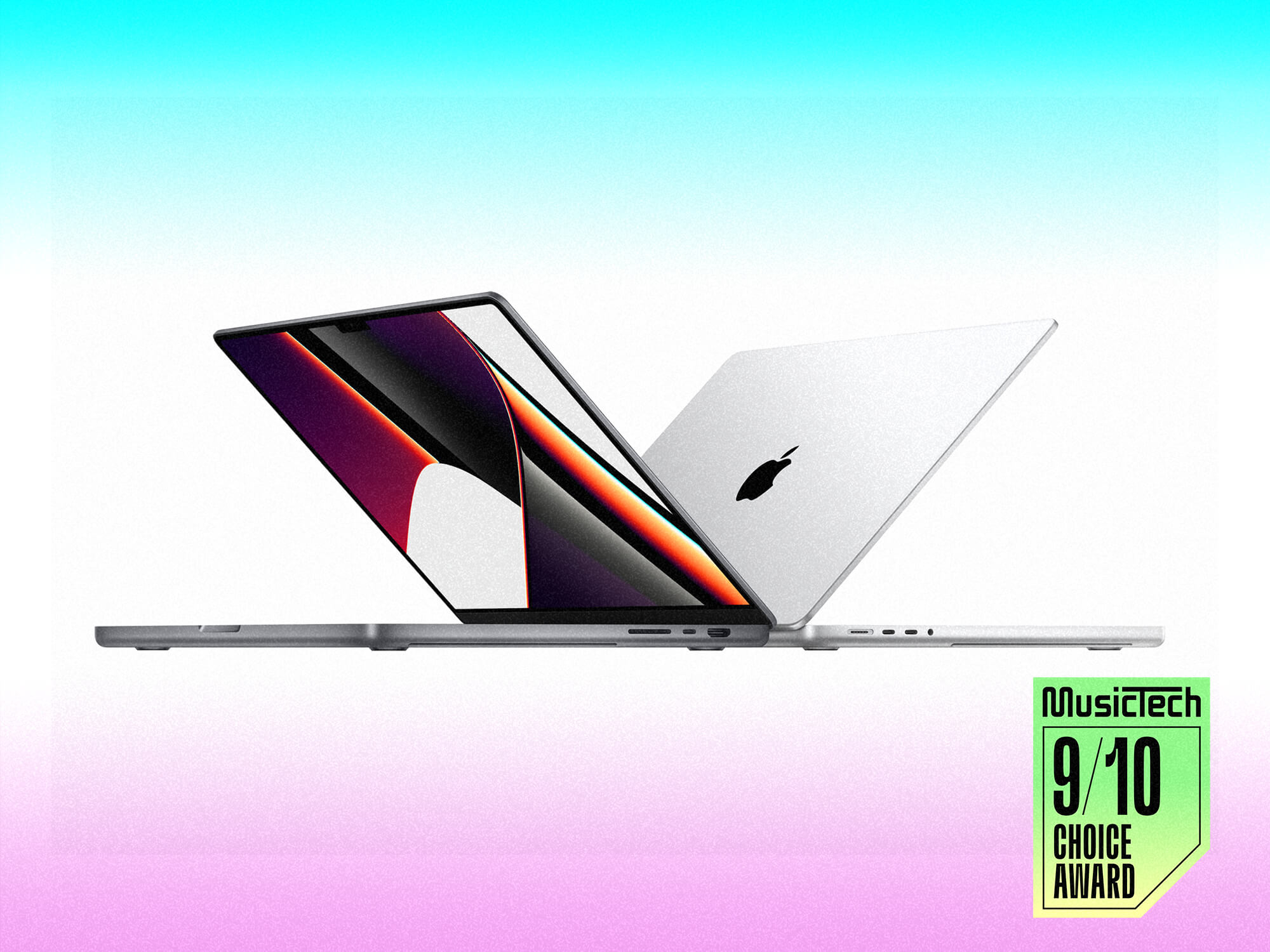 The sheer power and efficiency of the new MacBook Pros, especially the M1 Max, delivers the long-promised union of real power and portability – though at a price.


From the moment we saw the benchmarks of the newly-unveiled M1 processors that Apple put into its entry-level Mac models, it was clear that once they made their way into the company’s pro lineup we would be looking at something very special indeed.

And so it came to pass that the new 14- and 16-inch MacBook Pros are now powered by the M1 Pro system-on-a-chip (SOC) with the option to upgrade during the ordering process to the M1 Max. There are various permutations of hardware but the major differences are that the M1 Max is available with up to 32 GPU cores and can go up to 64GB of RAM, whereas the Pro tops out at 32GB.

All but the lowest-spec M1 Pro models feature a 10-core CPU: two efficiency cores and eight high performance cores. Gone are the days of Intel’s hyperthreading and the supremacy of clock speeds – it’s all about efficiency and memory bandwidth these days (but if you’re interested, the M1 runs at up to 3.2GHz). 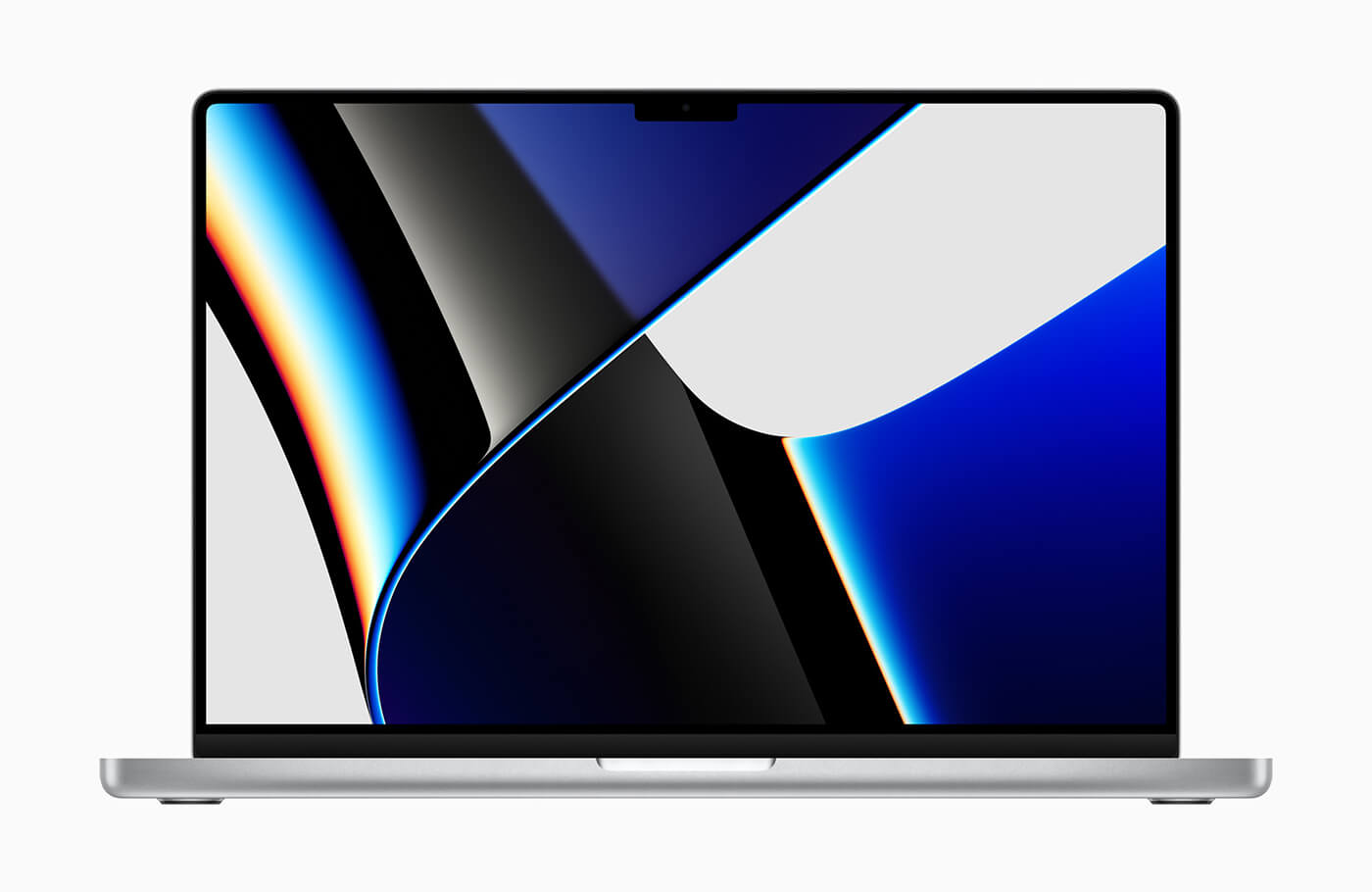 We’re going to look at performance for pro audio momentarily, but first, a word on the build. Apple has re-engineered the MacBook Pro around its new SOC, and in the process made it slightly thicker and heavier, though not to a point that’s in any way inconvenient.

The new MacBook Pro’s build quality is superb, even for a premium Apple product. The Liquid Retina XDR display is stunning, and though there’s now a camera notch on the top of the screen, you stop noticing it almost immediately. ProMotion allows adaptive refresh rates up to 120Hz for beautifully smooth scrolling and this can be locked if required when working with video.

The 14- and 16-inch models finally have 1080p FaceTime cameras, which is handy for broadcasting yourself. The six-speaker array with support for spatial audio sounds better than any laptop speakers have a right to sound. You won’t be mixing on them, but they are wide, rich and capable of going very loud indeed. For general media playback, they’re excellent. 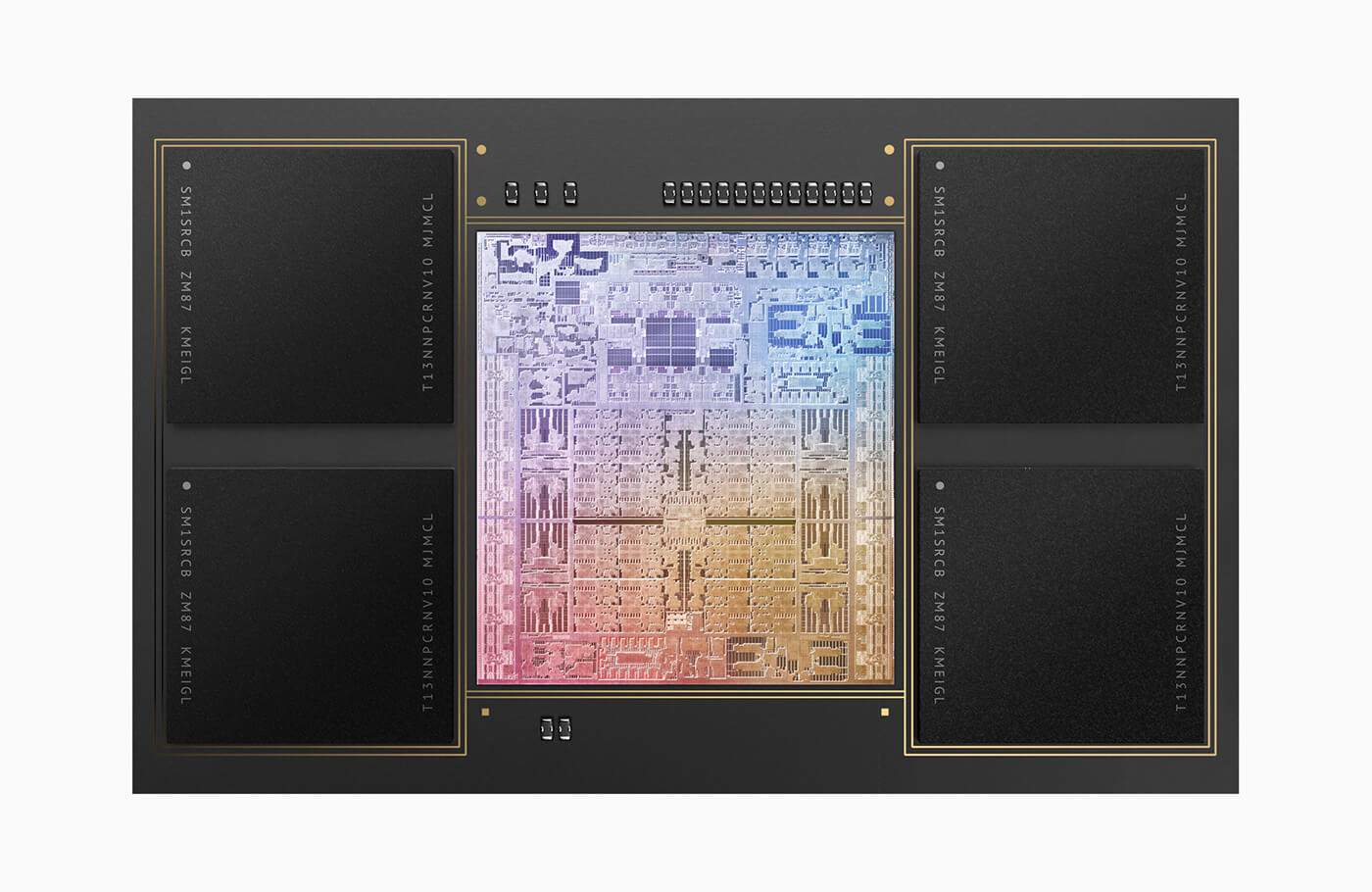 Apple has finally listened to its pro users’ demands when it comes to ports. There’s a MagSafe 3 charging port and three USB-C ports, any one of which can also be used for charging, as well as DisplayPort, Thunderbolt 4 and USB4 at up to 40GB/s ports. The SDXC card slot returns – photographers rejoice!– and there’s an HDMI out, as well as a 3.4mm headphone port that supports high-impedance headphones.

The Touch Bar is now gone and replaced with physical function keys. This will receive mixed reactions – it was undoubtedly helpful for some, particularly when well-integrated into DAWs like Logic Pro for using faders and buttons, but other users found they rarely bothered with it.

Our review model was pretty much a top-end machine with the M1 Max chip and 64GB of unified memory. Apple’s SOC shares its RAM between the CPU and GPU, which removes the bottleneck of moving data between physical components, and thus speeds up almost every kind of operation. The M1 Max has up to 400GB/sec of memory bandwidth, which is twice as fast as the M1 Pro and six times faster than the M1. In everyday use, this means that booting applications and loading large projects and sample libraries is lightning fast, thanks also to the up to 8TB of internal solid state storage available. 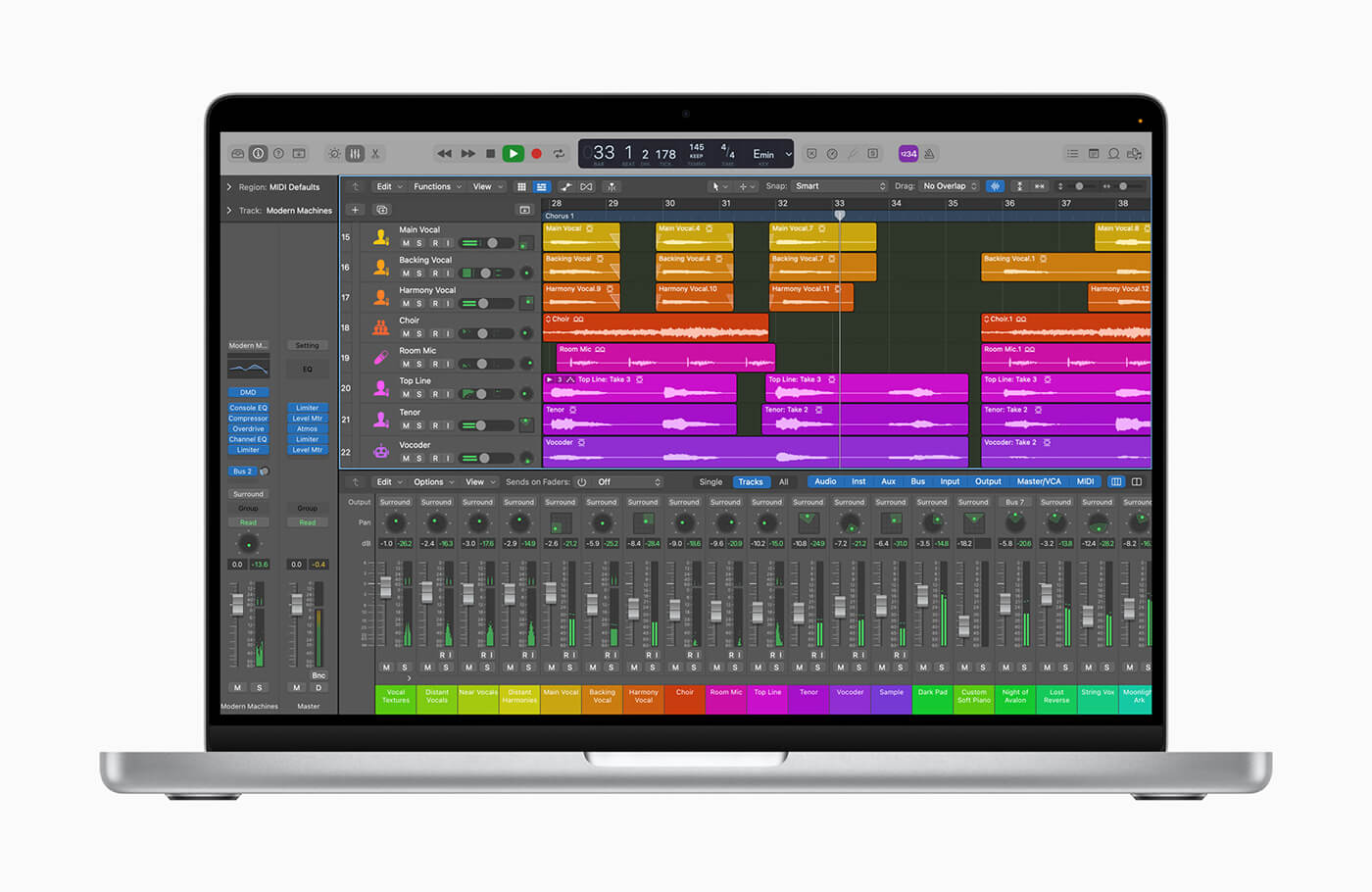 Power efficient to the core

Although the M1 Pro and Max are extremely quick, it’s in the area of efficiency that Apple has made remarkable strides. Anyone who has run large DAW or video projects on even the fastest Intel-powered MacBook Pro knows that it doesn’t take long for the fans to kick in, which starts a fairly rapid battery drain. Apple’s claimed battery life might stand up for web browsing, but not for professional work on battery power.

That all changes with the M series. Apple claims these systems match the maximum performance of an eight-core PC chip while using 70 per cent less power, and that this can be maintained while on battery power as well as when plugged in.

There are fans, but when Apple says you’ll rarely if ever hear them actually kicking in, they are right. Even under heavy load, our review model never became more than warm, while our Intel Mac under the same load becomes uncomfortably hot. Running large DAW projects on battery still uses more power than writing in Word, of course, but the difference from the Intel model is stark. Put simply, the anxiety that you absolutely must be plugged in to do serious work is no longer nearly a factor. 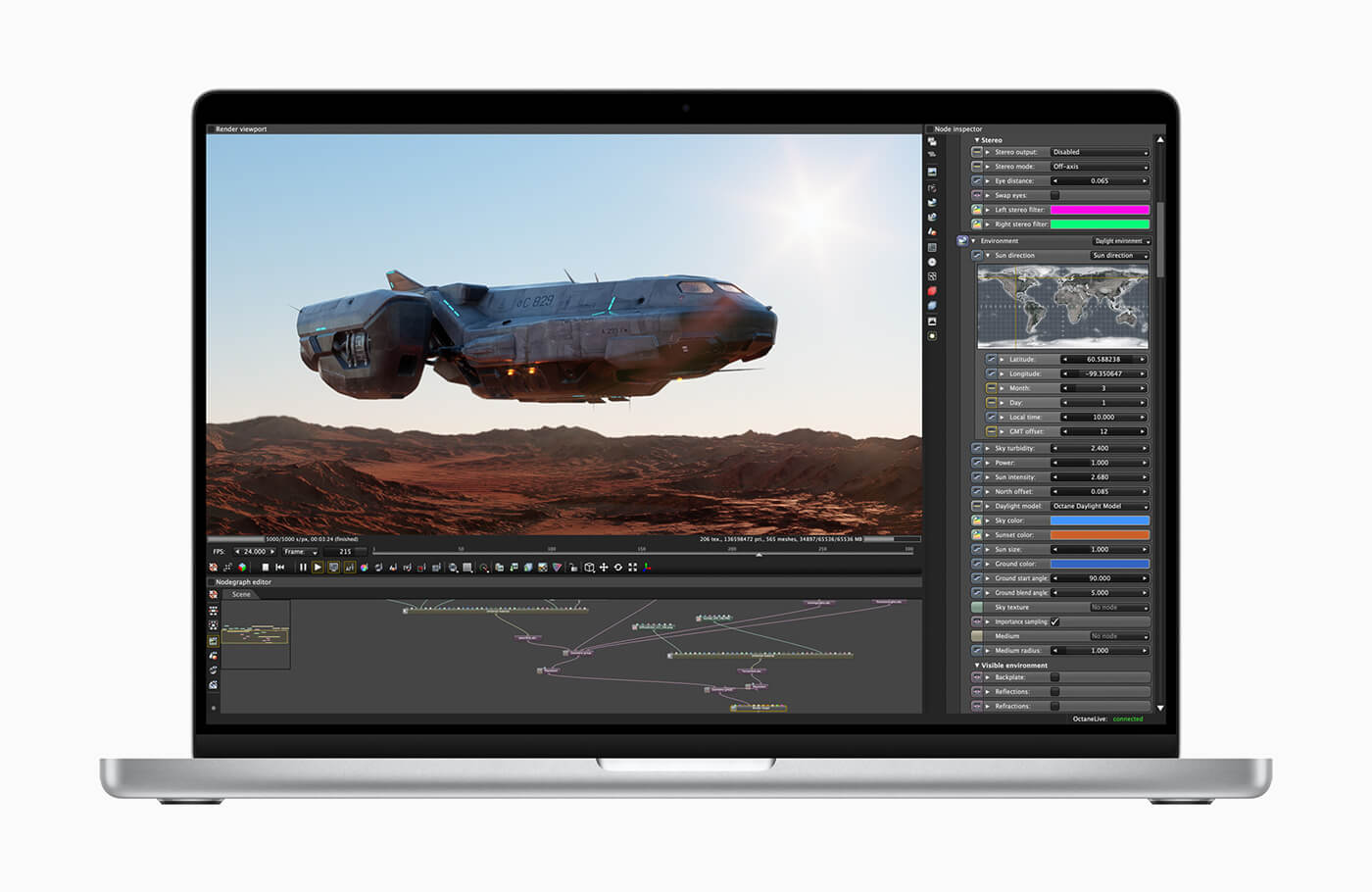 Using test Logic projects from music-prod.com, we ran a project containing 128 channels of Sculpture each with a full set of insert effects, at 64 samples audio buffer. The performance meter on the M1 Max hovered at around 48 per cent, while the Intel machine’s was at 74 per cent. A second project ran 30 instances of U-He’s power-hungry Diva synth, which the Intel Mac couldn’t manage without overloading the audio system. The M1 used around 80 per cent power to play it back.

Changing the audio buffer to 1,024 samples still didn’t enable the Intel to play the project without overloading, and on the M1 it curiously didn’t appear to cause CPU usage to change significantly. In the demo that Apple gave us, we saw Logic running hundreds of tracks in a live Dolby Atmos mix on battery without breaking a sweat. In Ableton Live, which is not yet M1-native, we were able to run 30 instances of the Wavetable synth without Live’s CPU meter breaking 40 per cent usage.

The transition to Apple silicon means that developers will need to update their DAWs and plug-ins to run natively, though the Rosetta 2 layer still allows non-native apps to run very quickly. And happily for pro audio users, the major developers who aren’t already supporting the M1 are mostly well on their way to doing so. Might you run into a legacy plug-in that won’t work? Perhaps, but such is the price of progress. 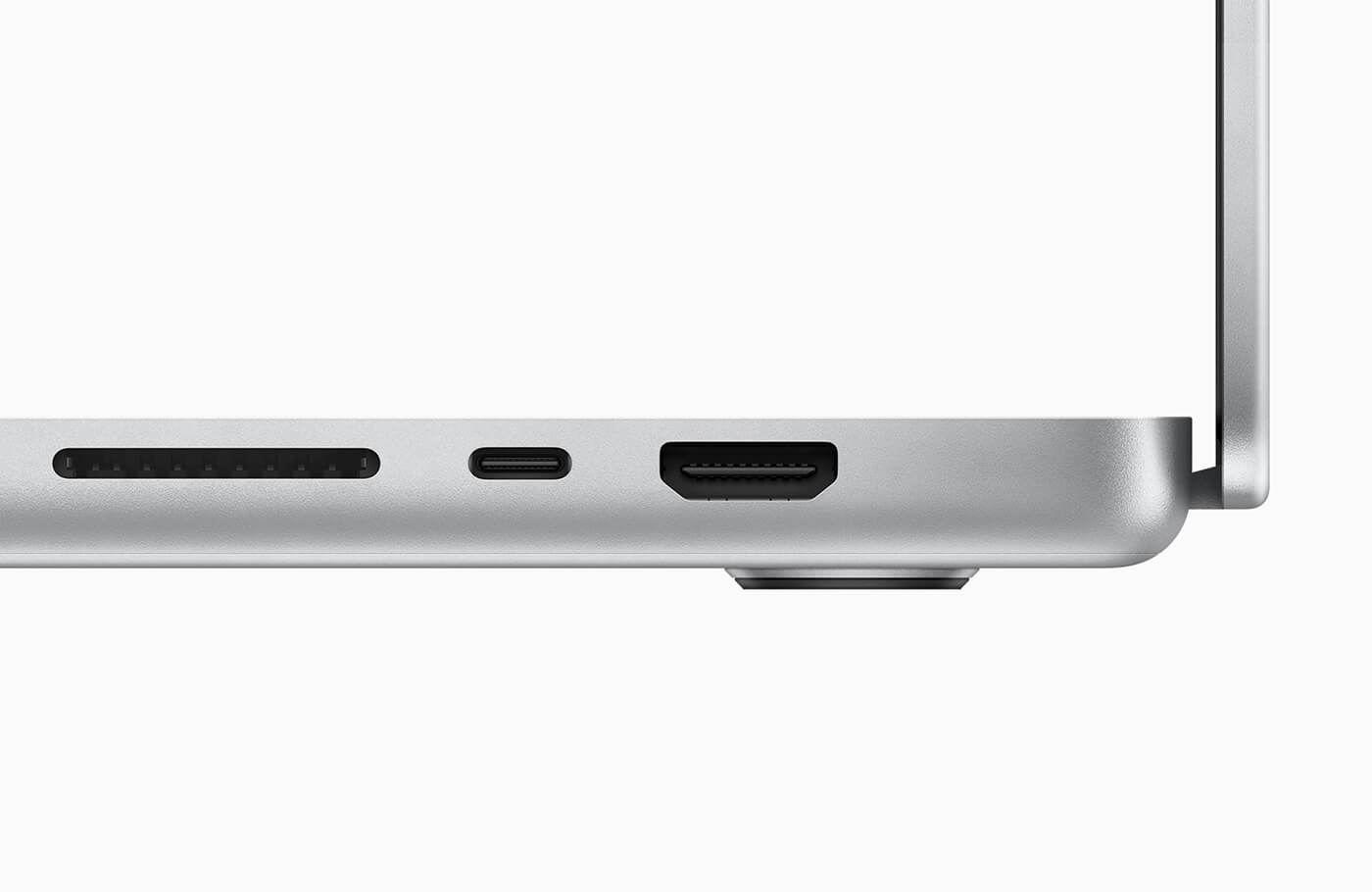 The M1 Pro and Max’s graphics capabilities are extremely impressive, though somewhat outside the scope of this particular review. For musicians and producers, the sheer heft of the processing power and the battery efficiency are what we’re here for. Battery anxiety, while never entirely done away with, is now far less of a worry with these machines. There is no significant throttling while working on battery power either. We are finally getting to a place we’ve been promised for many years where portability genuinely meets pro performance.

There’s the issue of price, too. The M1 Pro system is less expensive but to be able to use 64GB of RAM you will need the M1 Max with its greater number of GPU cores, whether they are particularly vital to your workflow or not.

Since Apple’s laptops have not been user-upgradeable for many years, it’s always advisable to get as much RAM as you can afford on ordering, especially if you plan to run large sample libraries.

If you own a recent and well-specced MacBook Pro, you will certainly gain from upgrading, particularly in terms of headroom and power efficiency while working on battery. But it’s anyone coming from an older or lower spec machine who will feel the night and day difference between the two when it comes to snappiness in everyday use. These new MacBook Pros are phenomenal machines for more or less any task, mundane or pro, you could wish to use them for.