Eddie Symons AKA Bovaflux / Nullptr invites us into his home studio, where he weaves electronic music with Renoise, hard synths and a modular rig. 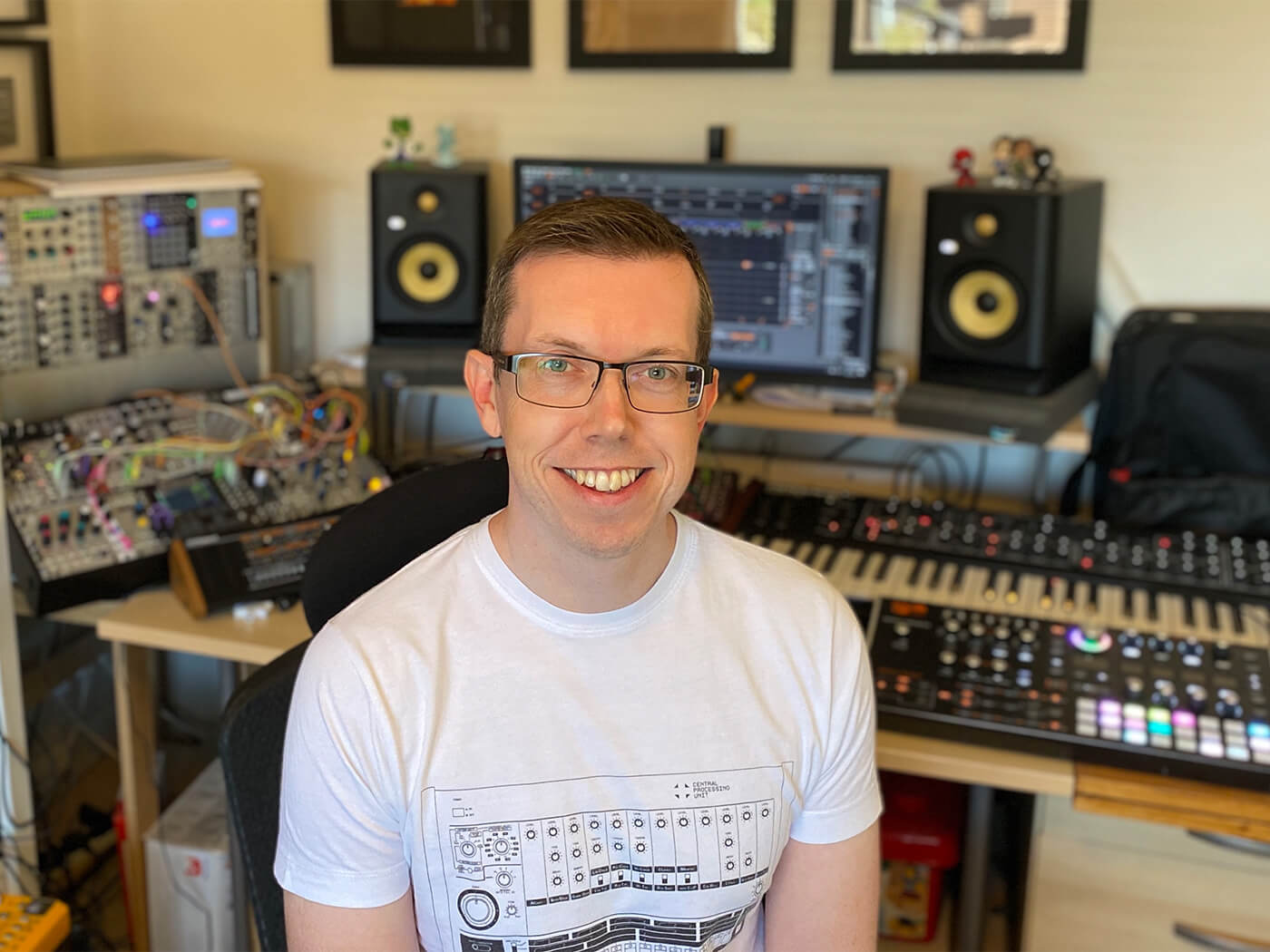 It’s my nest where I can cut off from everything and write music. For a long time I was moving house every two or three years, and the first thing I would do when moving in is set up some space so I can write tracks. A place doesn’t feel like home until I’ve done that. I even do it most of the time I go on holiday now too, usually with a reduced set up of just a laptop and a Korg Volca or something.

Tell us more about the studio, Eddie!

My studio is the spare room in my house. It’s only in the comfort and privacy of my own home where I feel like I can get into the right headspace to create. It’s actually the biggest bedroom in the house, so part of the deal me and my wife came to is that it also has to double as the guest bedroom. That’s a bit frustrating when we have guests as it means I don’t get to make tracks for a while, but it’s fun for any guests who are into making music! 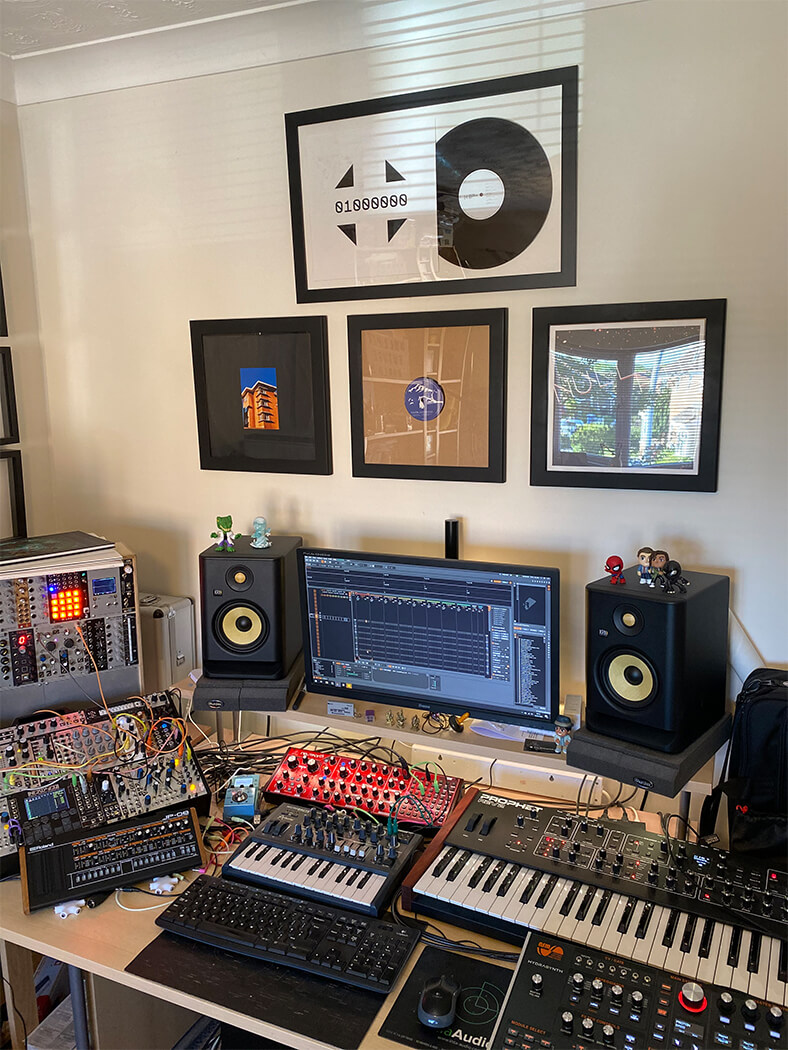 I’ve been a bedroom producer since I was a teenager, which for me went hand-in-hand with getting into programming and teaching myself how to write video games. Locking myself away and learning how to do all these different creative things with computers was an absolute obsession. I feel very lucky that I grew up at a time when it became possible to pursue all kinds of creative directions through relatively affordable technology.

You have a lot of great synths and drum machines – how much of your work is done in-the-box?

I used to be completely in-the-box at one stage, but about six or seven years ago I started to get the hardware bug again, and gradually started gathering synths. These days I would say twenty percent of a track is done in the computer – a bit of sequencing, mixing and sample chopping. I’ve been building this studio for about six years, and since this is the first time I’m doing this in a place I own rather than rent, I’m treating it more long term, so I’m allowing my setup to grow more than before. 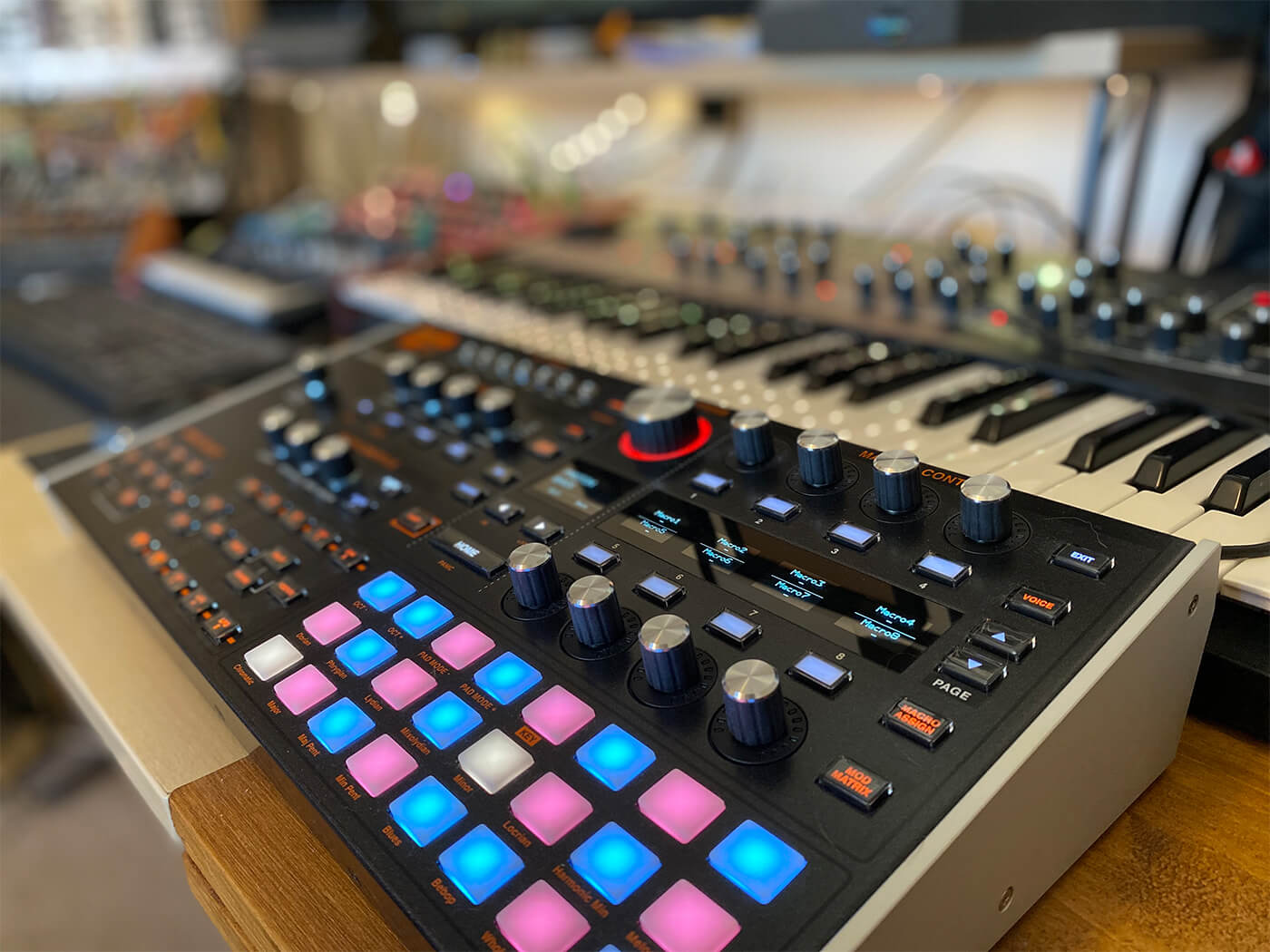 I still battle to try and keep things relatively compact though, so I try to make sure everything is within arm’s reach. Keeping everything close by and accessible means there’s no friction when I’m halfway through writing tracks and think I need a certain sound from a certain bit of hardware. When I see some huge sprawling studios I don’t understand why anyone would want that, as I know I’d feel lost in too much stuff. It is a constant battle though, as there’s so much great gear coming out all the time, so I’m always trying to think of new ways to rearrange things to squeeze in just one more little synth! 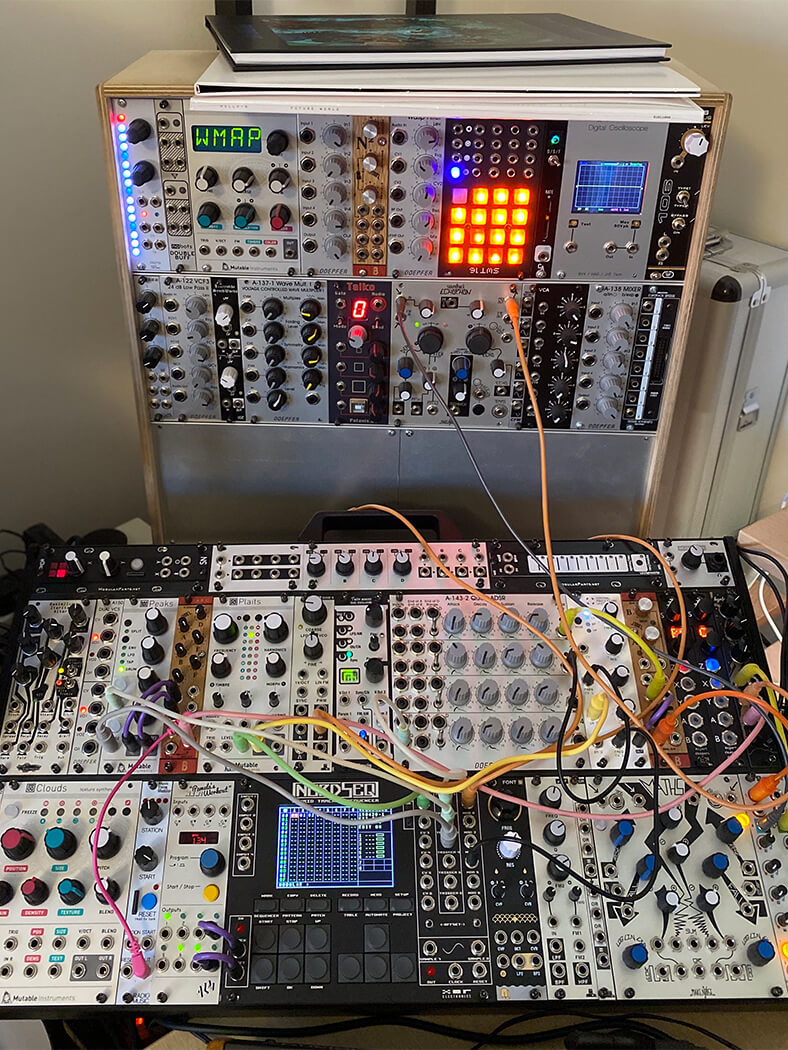 I use Renoise, which is a tracker style DAW. When I was younger I got into music through playing around with OctaMED on the Amiga, so making music from vertically scrolling pages of hex numbers is kind of all I know really. When I started out all I had was the Amiga, so all my tracks had to be made with a maximum of 512kb of samples over four channels. I used to make a lot of jungle and drum ’n’ bass back then, so I really became an expert at chopping and slicing samples.

After moving to a PC based set up, I tried a range of DAWs but couldn’t find anything that I could work with as efficiently. With Renoise, it has full support for VSTs and MIDI sequencing, so I was able to develop out of purely sample-driven music while still keeping my working methods roughly the same. I just get to be a lot more indulgent with sample memory now, with tracks easily using up over 100Mb! I still program a lot of my drums in the same way as I used to, but the synth parts are now much longer recordings, kind of like using a 4-track recorder approach. Doing it like this means I can capture lots of variations and tweaks during a track so the synths feel more alive. 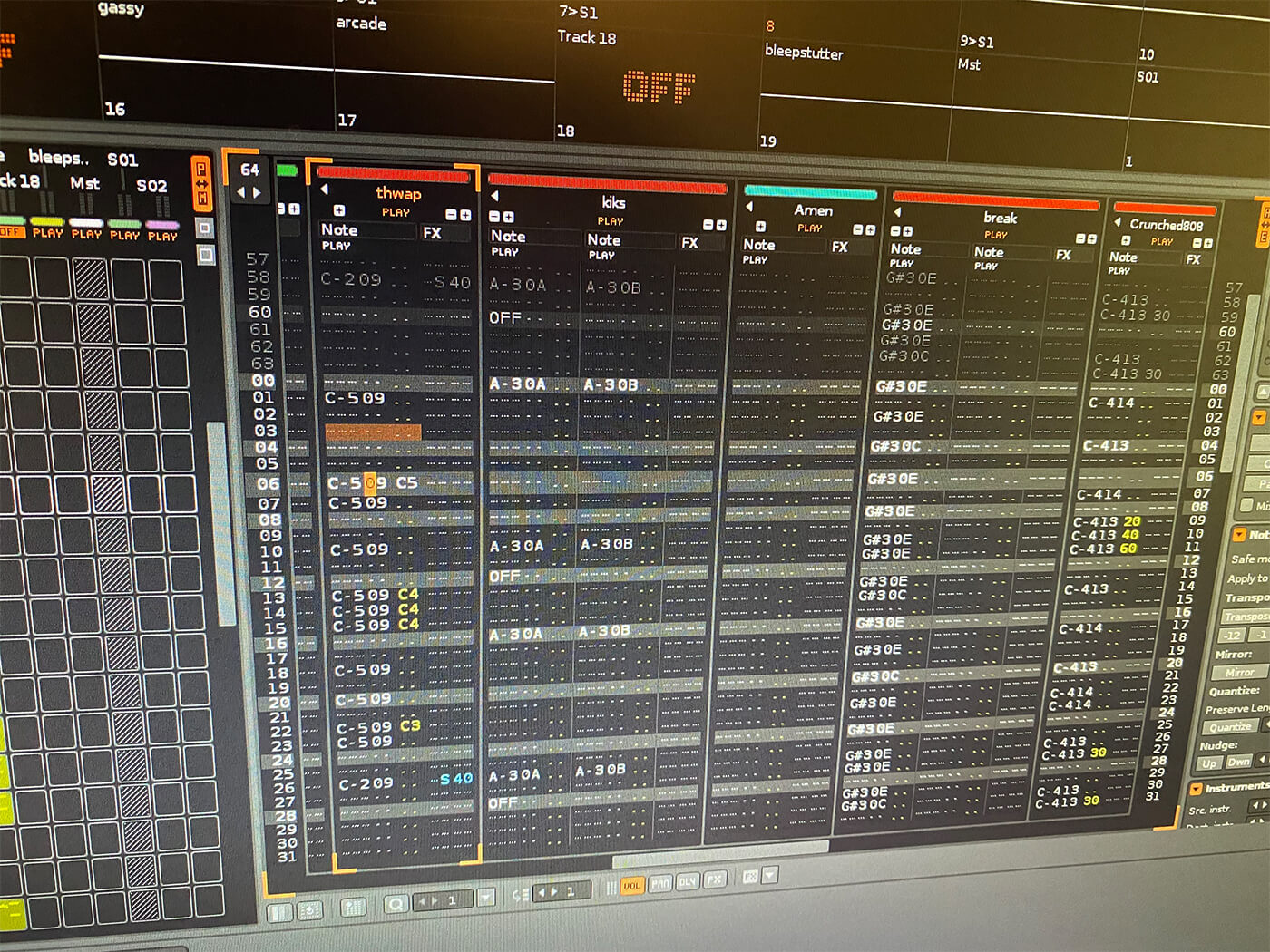 Can you tell us a bit about your modular gear?

I started getting into modular stuff around 2014 I think. I had bought an Arturia Microbrute, which has an audio input and this tiny patchy bay in the corner, and I heard in a review some mention of it being Eurorack compatible. I didn’t really know what that meant, but after looking into it I thought I could maybe build on the limited palette of the Microbrute by adding a few modules. I got a little Doepfer mini case and an Intellijel Dixie II oscillator (still my favourite analogue oscillator), which meant I could now do dual-oscillator stuff for a wider range of tones, or use it as an extra LFO. 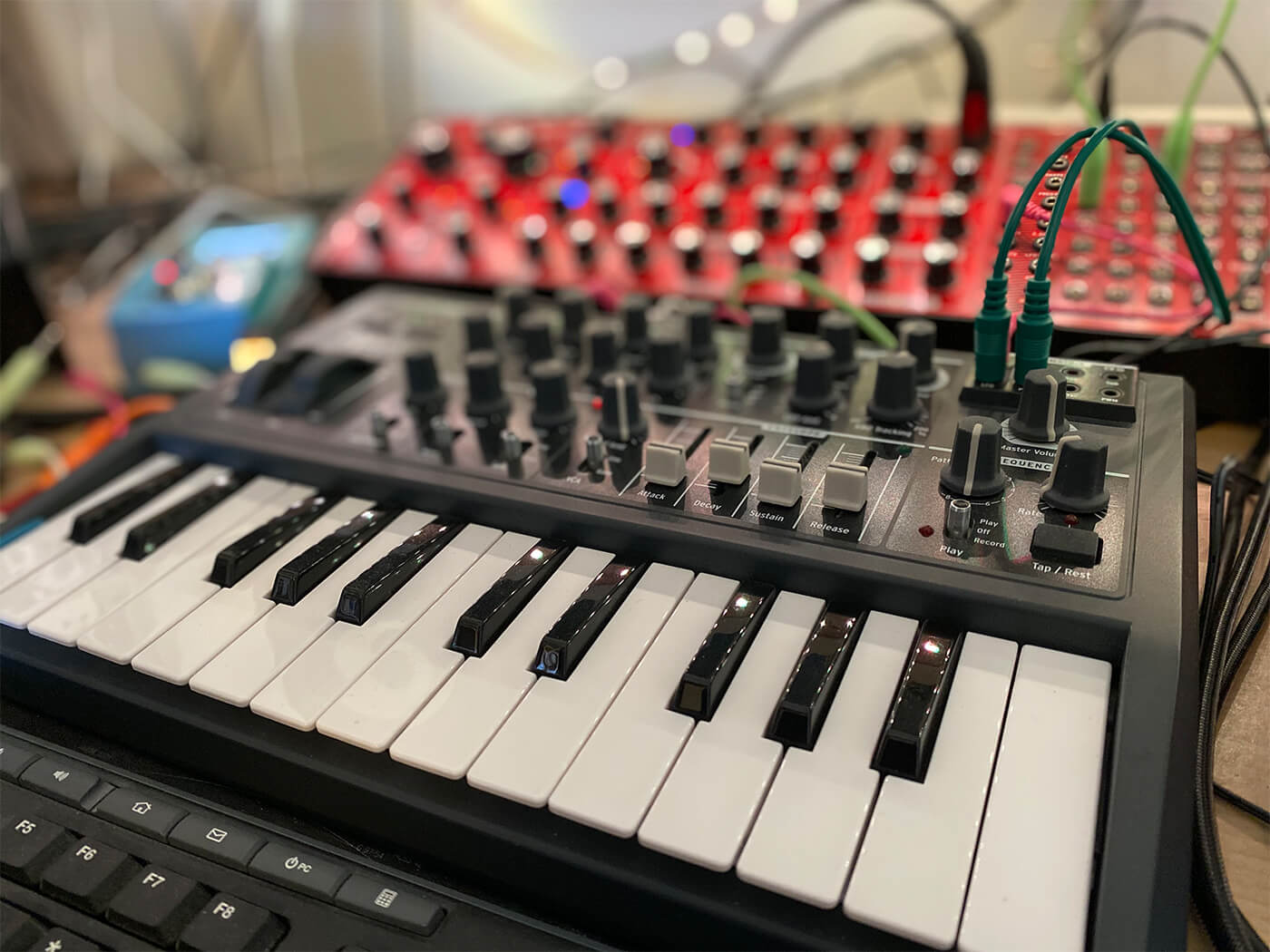 After a while I ended up with a few more modules so the modular could function as its own voice, separate from the Microbrute. At first I sequenced it via a MIDI module, then from its own sequencer. Over the years it’s grown from there, into what I’d consider a relatively large system. It’s actually two cases now, a 9U Doepfer case and a portable Intellijel 7U case. The Intellijel case was kind of built as a portable custom groovebox, so I can build full tracks with just that system. I can have a bunch of percussion sounds (using Basimilus Iteritas Alter, Prok, Peaks and Radio Music), three or four synth sounds, plus mixers and effects, and it’s all sequenced with NerdSeq, which is very much like having Renoise in a module. 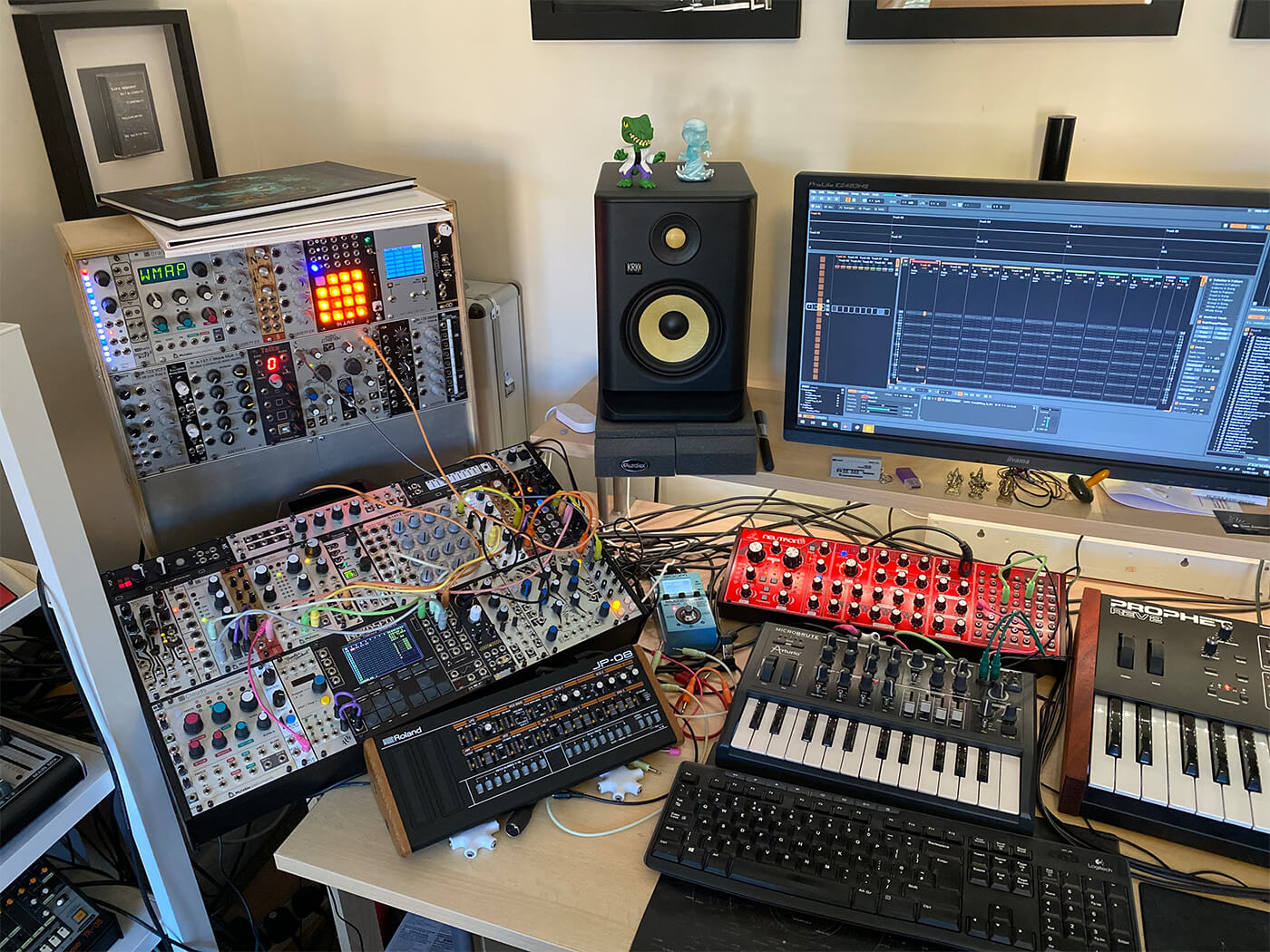 What gear gets the most use on your new release?

Although it was still used a fair amount, my modular took a bit of a back seat for Future World, with a lot of the heavy lifting being done by the Rev 2. It really took me a long time to get into that synth properly, as I kind of have a love-hate relationship with the Curtis-style filter it uses, and the way that it loses any bass when resonance gets cranked up. I was kind of making problems that didn’t need to exist really, as I have plenty of other synths and filters which are bass compensated, so I should have just stuck to using the Rev 2 for what I got it for – lush, warm pads. I’m a bit obsessive though, and when I have a new toy I want to use it for everything! Incidentally, I figured out in the end that just using the second layer of the Rev 2 as just a sine wave will add the weight back into any squelchy bass sounds that use a lot of resonance, so you can still have the best of both worlds. 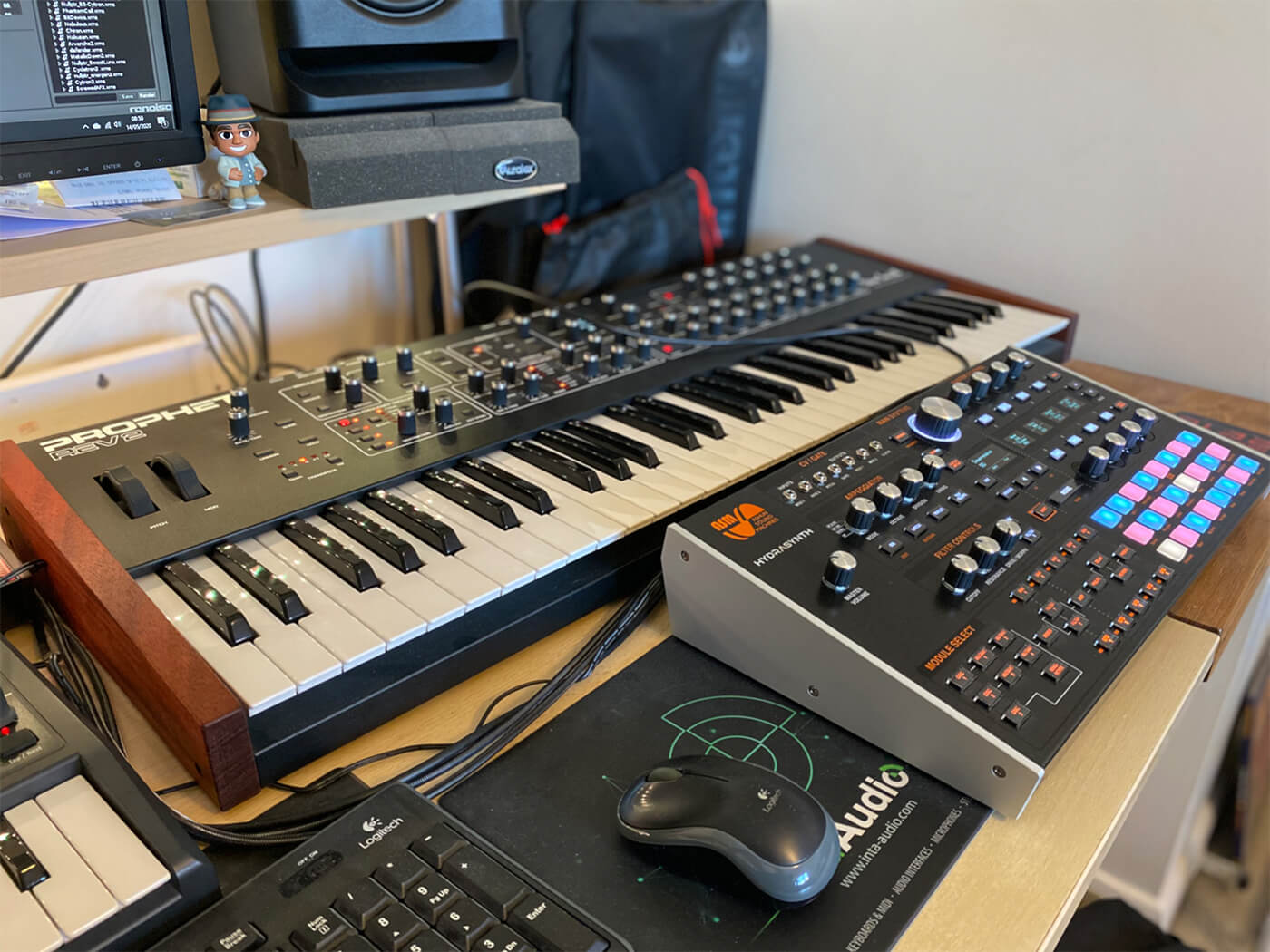 I want it to be a cosy space I feel relaxed and inspired in. I have copies of all my vinyl releases up on the wall as inspiration, along with shelves packed with comics, videogames and action figures – reminders of the imaginary worlds I used to obsess over as a kid. I want it to feel like a little audio playground full of knobs, flashing LEDs and buttons which you can’t resist fiddling with. 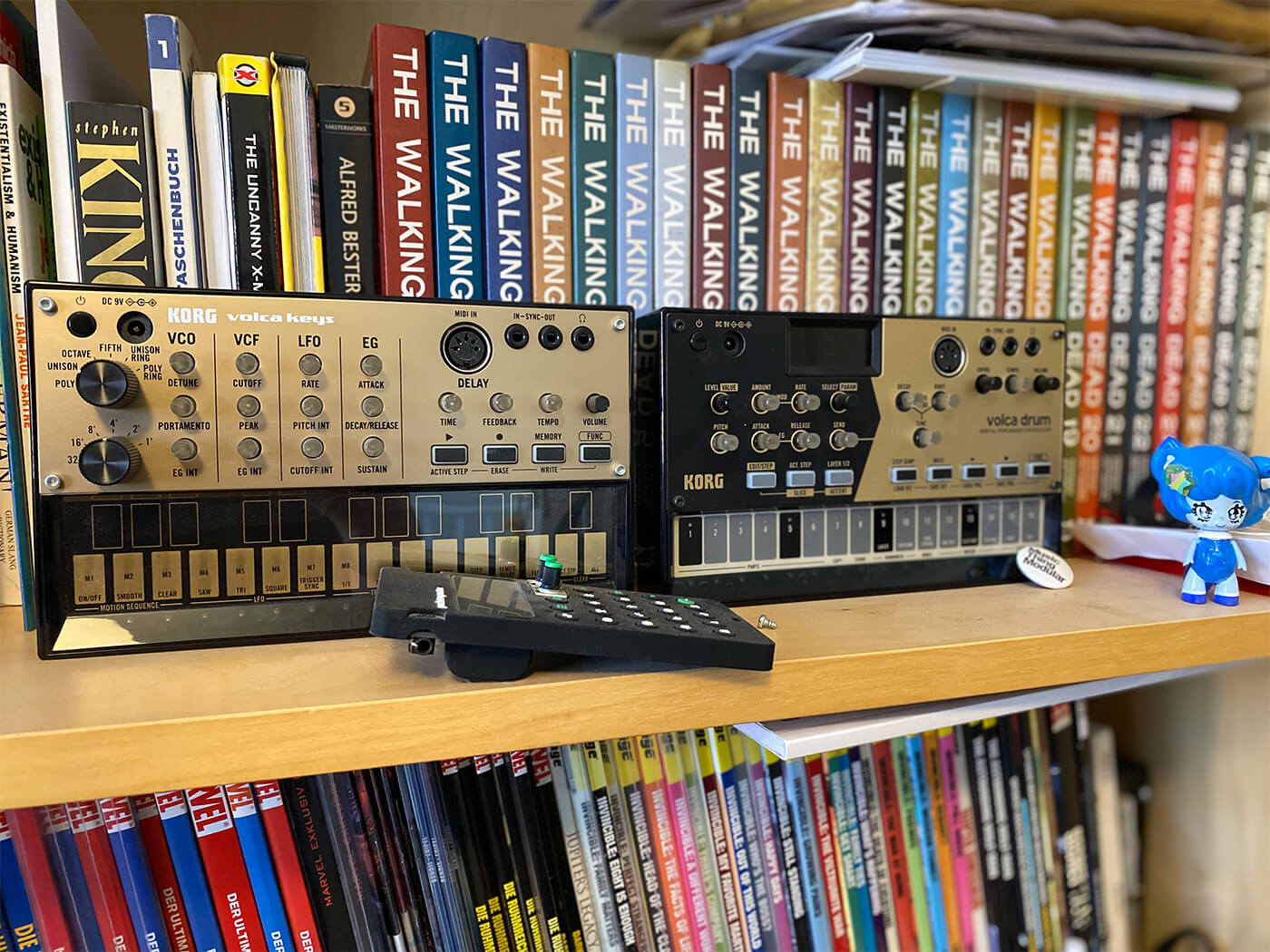 I’m not sure if it counts as it’s really a combination of bits of gear, but my modular rig is easily my favourite. It’s so flexible in how you use it, whether like a basic monosynth, a weird noise machine, a drum machine, an effects unit, or combinations of all of them.

Considering the lack of space in my studio, I think something like a Korg NTS-1 would be a wise choice. 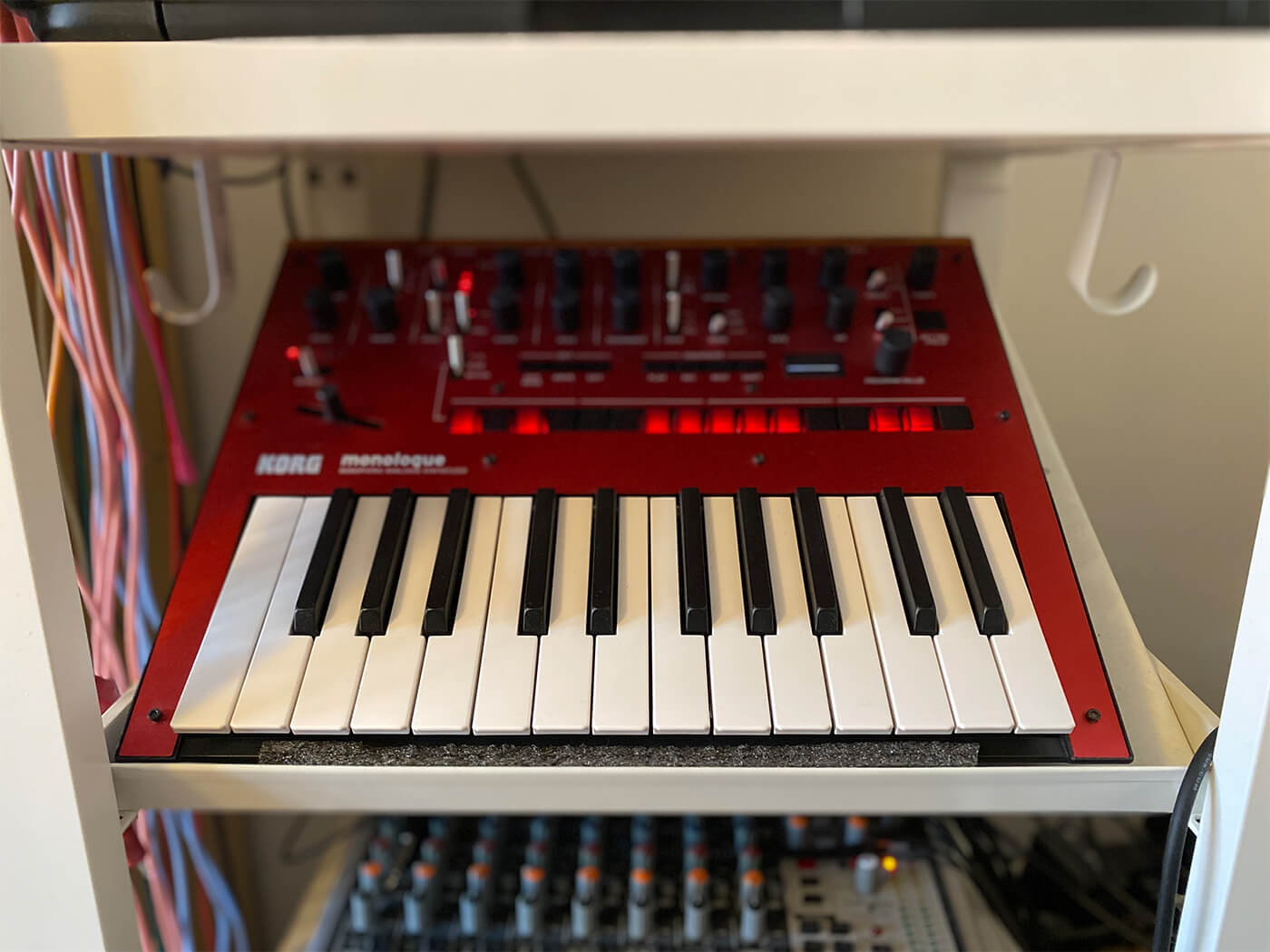 I’d really like to see augmented reality working with more synths, so that you can really go crazy of visualising what’s happening inside. In my opinion, the reason basic analogue synths are so great is because you can always see what’s going on just by looking at the panel controls. This becomes impractical as the synths get more complicated, so programming becomes much harder and less intuitive. With AR you could explode out the interface and use huge amounts of physical space to illustrate what’s going on. I know there’s some kind of AR support on Behringer’s DeepMind so I’d love to try that out. My dream synth would still be using physical controls though – motion controls and touchscreens are a pet hate of mine. 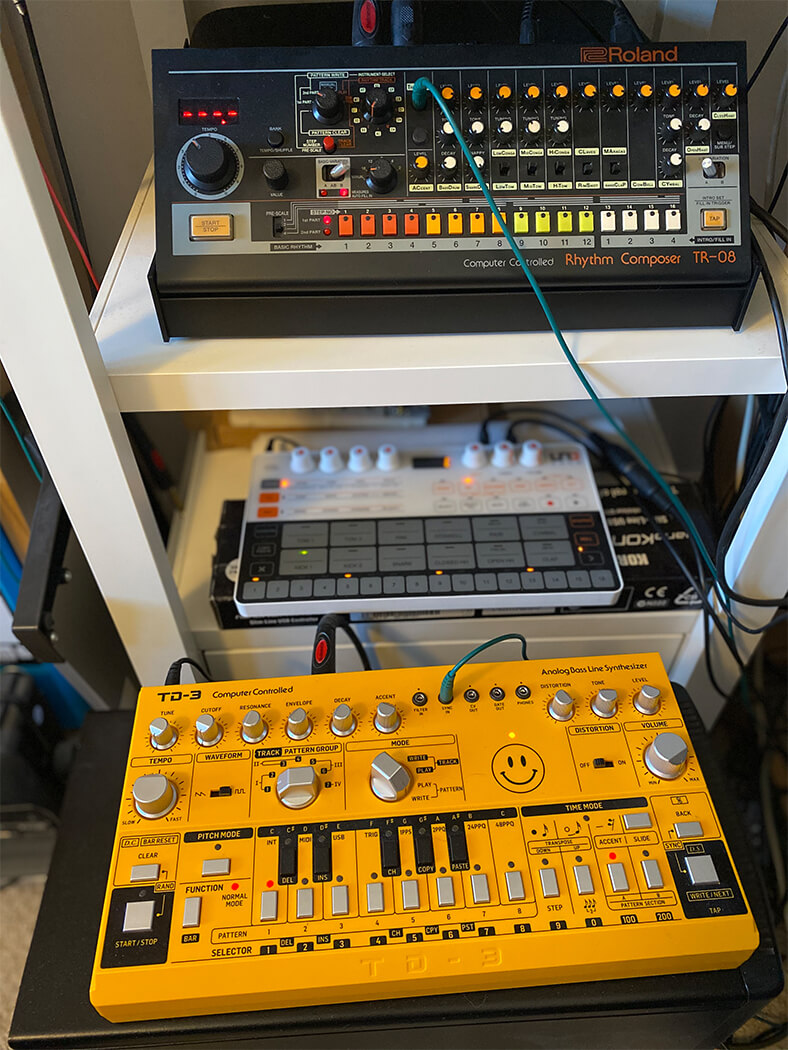 There’s loads of impeccably produced bad music and loads of badly produced amazing music. People are a lot more forgiving of the latter.

There’s a scene in Gran Torino where a young guy asks Clint Eastwood’s character how he acquired his garage packed full of tools, and he replies that you don’t get them all at once, you pick them up over time. I think the same applies to a studio. You don’t need a huge amount of equipment to be able to start making music, and if you have the mindset that you’ll only be able to make decent tracks once you have all the shiny gear, then you’ll probably always come up with excuses. Start with what you have now and build it gradually. 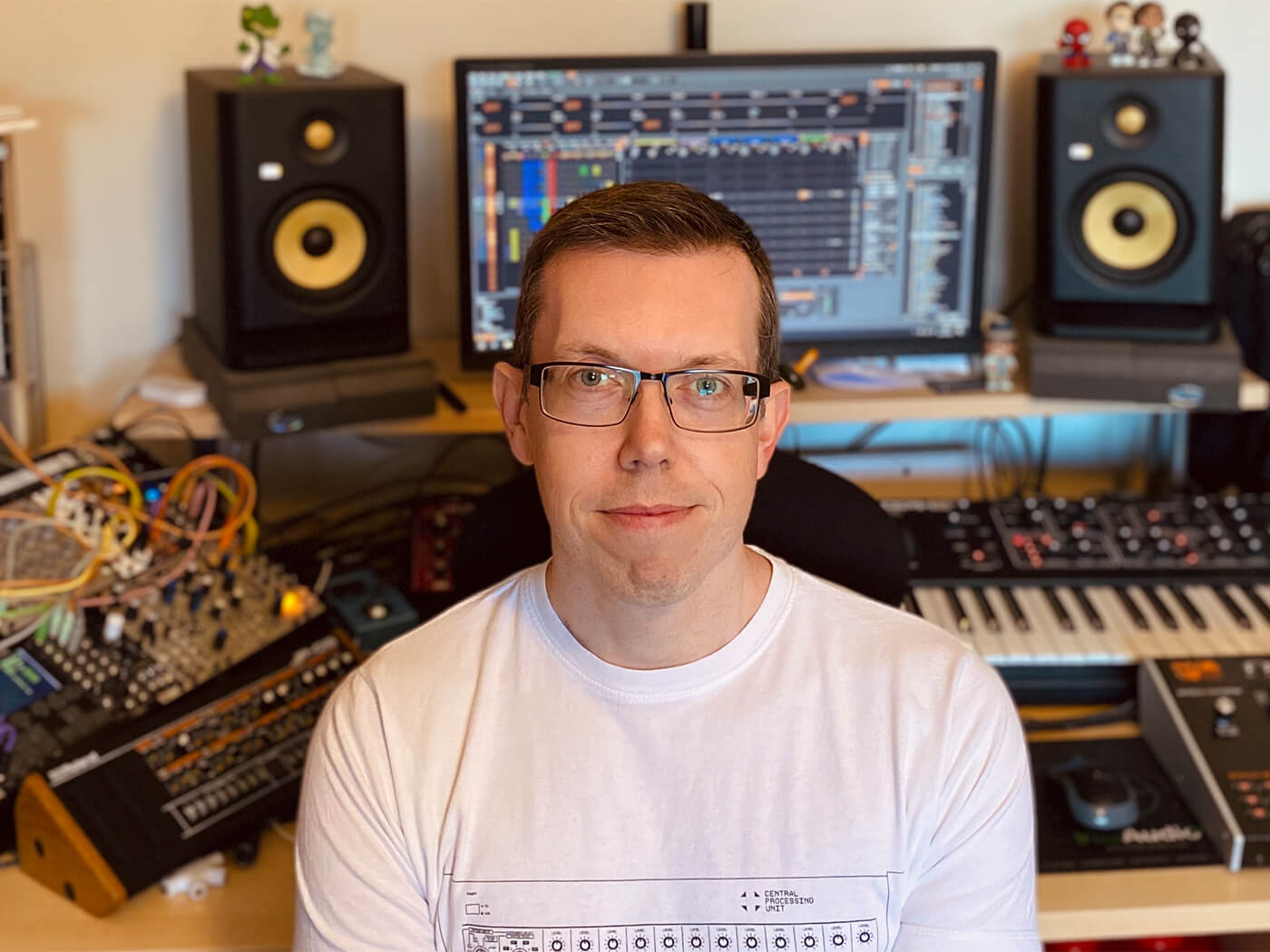