Thanks to the world’s resurgent hunger for hardware, there’s no shortage of amazing synths on the market. But this one, courtesy of new company Ashun Sound Machines, is unlike any other. 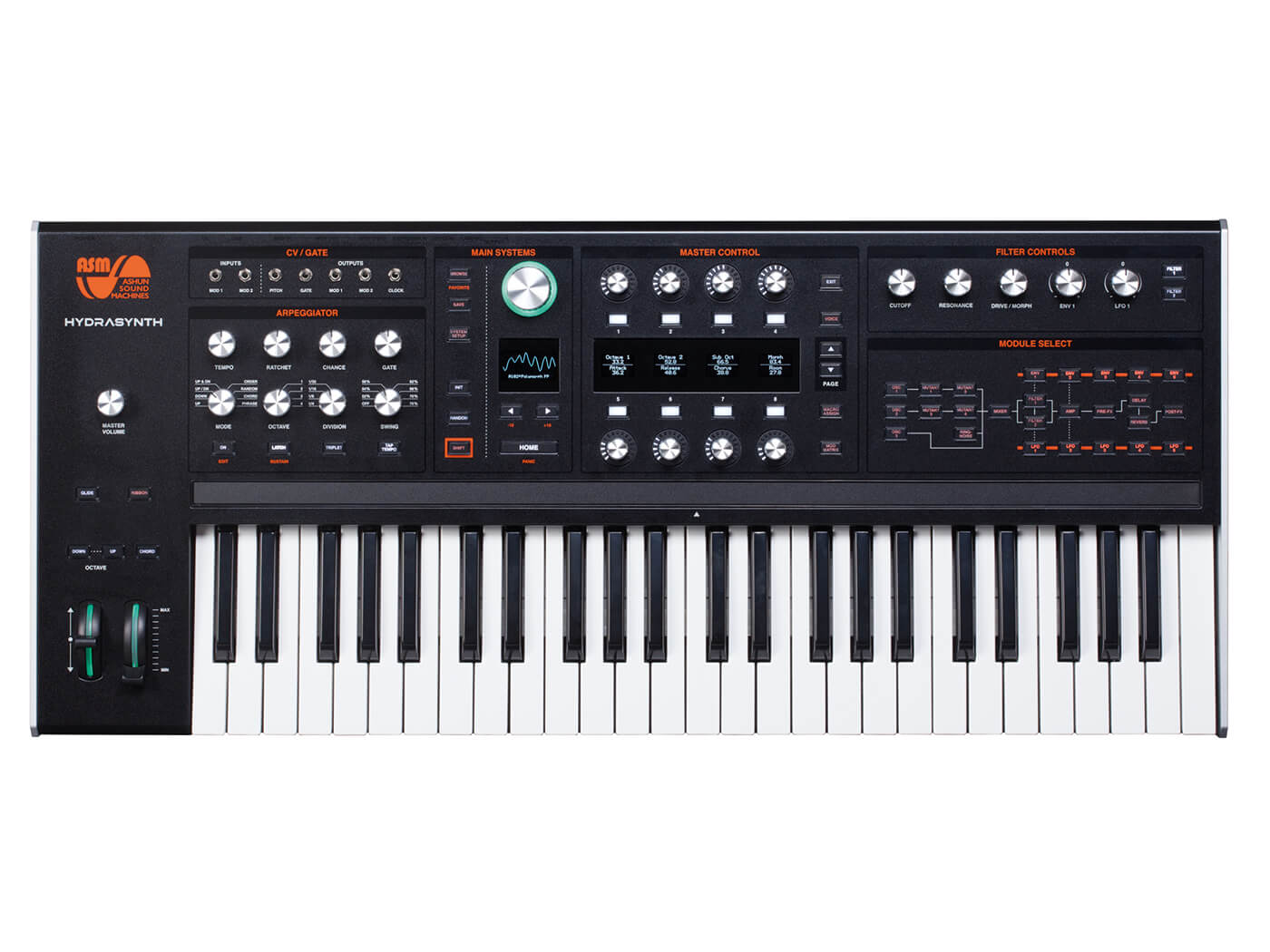 Not long ago you could’ve made a strong case that the days of the hardware synth were waning. With the audio world in love with its increasingly powerful home computers and their almost infinite capacity to run software instruments and support immeasurably vast sample libraries, most of our sonic needs were met. For a while there, we thought we no longer needed hardware. How wrong we were.

Whether it’s the exorbitantly priced Minimoogs, Junos and Jupiters propping up the second-hand market or one of many new synths touted as the ultimate live-performance instrument, our resurgent hunger for hardware has resulted in options that cater for all needs. Despite this renaissance though, it takes some serious courage for a new company to wade into the fray with a new hardware concept, especially one built on a digital rather than analogue foundation – and that is exactly what Ashun Sound Machines (ASM) has done. 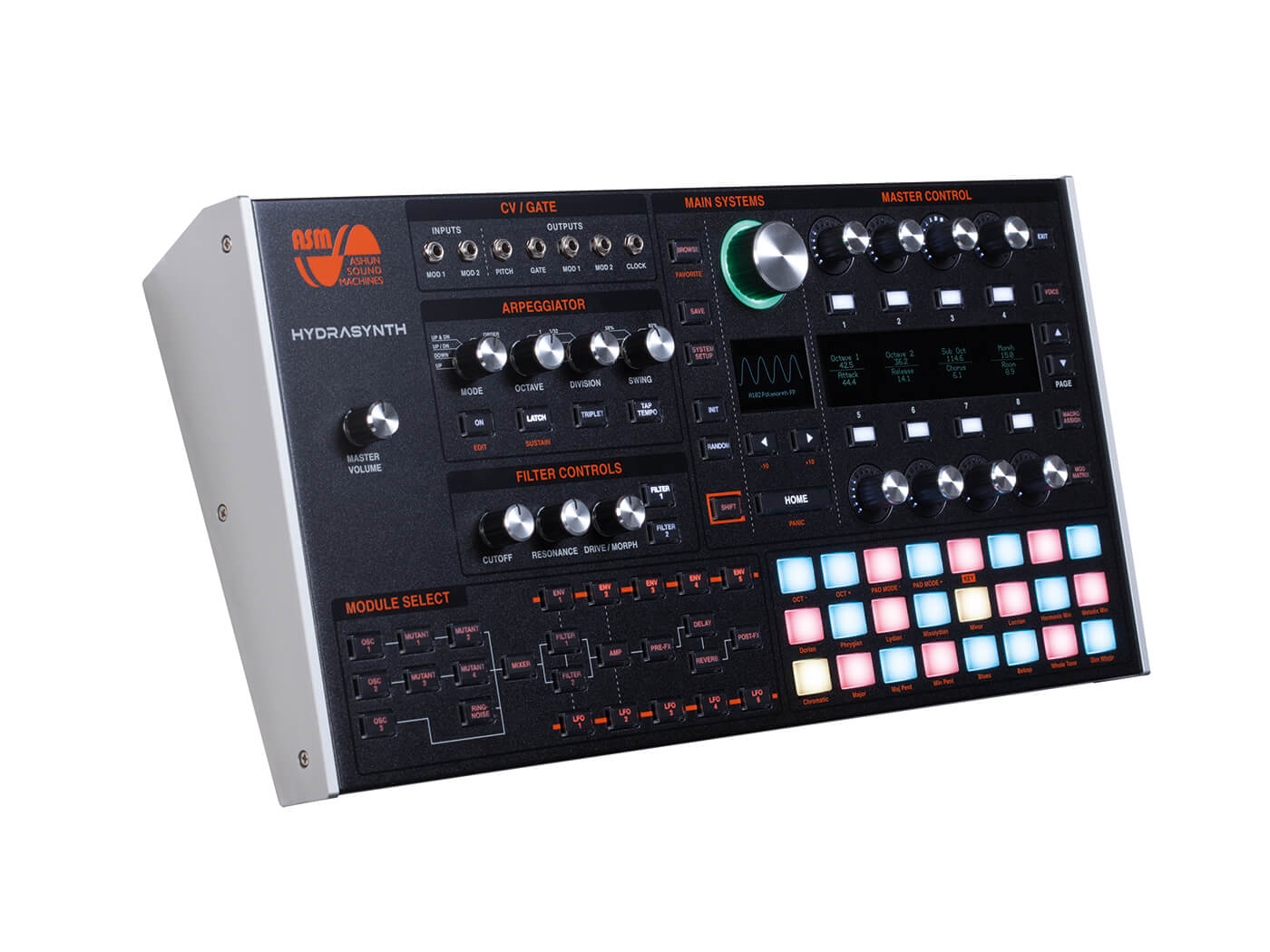 The California firm’s inaugural product is the stunning Hydrasynth, available in both keyboard and desktop formats. Built like a particularly attractive tank and featuring four octaves, the keyboard version both embraces and defies conventions at every turn. Its end cheeks are metallic, not wooden, and it sports two headphone ports on the front panel for both ¼-inch and mini-jack connectors, each with their own rocker-wheel volume dial. Rather than having detents in which to place your control finger, the Hydrasynth’s pitch and mod wheels instead offer a kind of lever, which proves much more tactile.

To best recognise the Hydrasynth’s broad capabilities, it’s helpful to get to grips with its signal flow and, in a splendid touch, ASM has not only laid this out on the synth’s upper panel but also included buttons that let the user jump between the modules of a sound’s structure. Want to tweak Oscillator 1? Click its button and the eight rotary dials in the Master Control section will let you access its parameters. Want to jump to the end of the signal flow and adjust the effects? Click the Delay, Reverb or Post-FX buttons and the Master Control section will respond accordingly.

The Hydrasynth is a three-oscillator affair, and Oscillators 1 and 2 can be modulated via a pair of Mutator modifiers before the three oscillators are reunited in order to pass through a mixer stage. Mutator options include frequency modulation, Wavestack (imagine a supersaw waveform and then apply it to any other you can think of), sync, and generous pulse-width modifier options.

Freshly mutated oscillators pass through two filters – which can run in series or parallel modes – and an amplifier stage before reaching pre-effects, delay, reverb and post-effects pathways. Hydrasynth provides five envelopes and five LFOs. In another lovely move, the backlights for these buttons behave according to their settings, with the LFOs strobing according to their rate and shape, for example. With Hydrasynth, it seems that ASM has taken the best and most convenient facets of plug-in interface design and applied it to hardware. 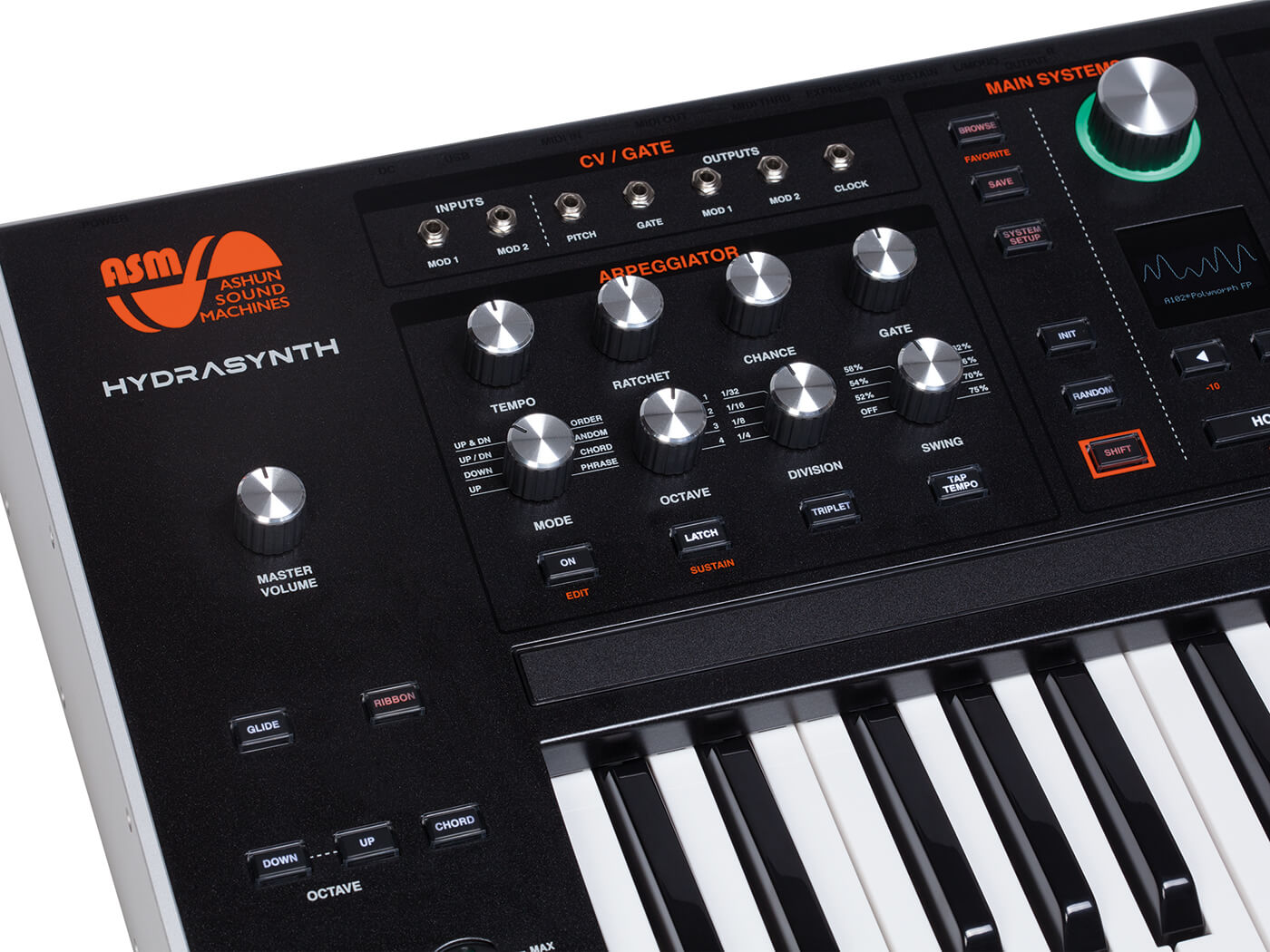 Wave scanning and beyond

Whether hard or soft, synthesizers are only as good as their oscillators. In Single mode, each of the Hydrasynth’s oscillators can use one of the 219 waveforms onboard. To assign one, press the Oscillator 1 button, use Rotator 1 in the Master section to confirm Single mode, and use Rotator 2 to scan through the waveform options. You’ll, of course, hear these as you play but, with the Hydrasynth, you can also see them, with the Korg Minilogue-style display providing an oscilloscope.

With Oscillators 1 and 2, you can switch from Single to Wavescan mode, which lets you load eight waveforms simultaneously. Each can be selected from its own rotary before being morphed from one to the next, either manually, to find a fixed intermediate position you like, or via one of the modulators.

Oscillator 3 can’t be used in Wavescan mode but its sonic capabilities are incredibly deep. Wavetable synthesis is supremely capable but often long-winded to program. The Hydrasynth, however, makes it straightforward and exciting. Filter 1 offers 11 DSP-based modes, including Moog-style 12dB and 24dB per-octave ladder designs, and Korg MS-20 clones. There are also cutoff, resonance and filter drive rotaries, as well as positive and negative amounts of Envelope 1 and LFO 1 modulators. 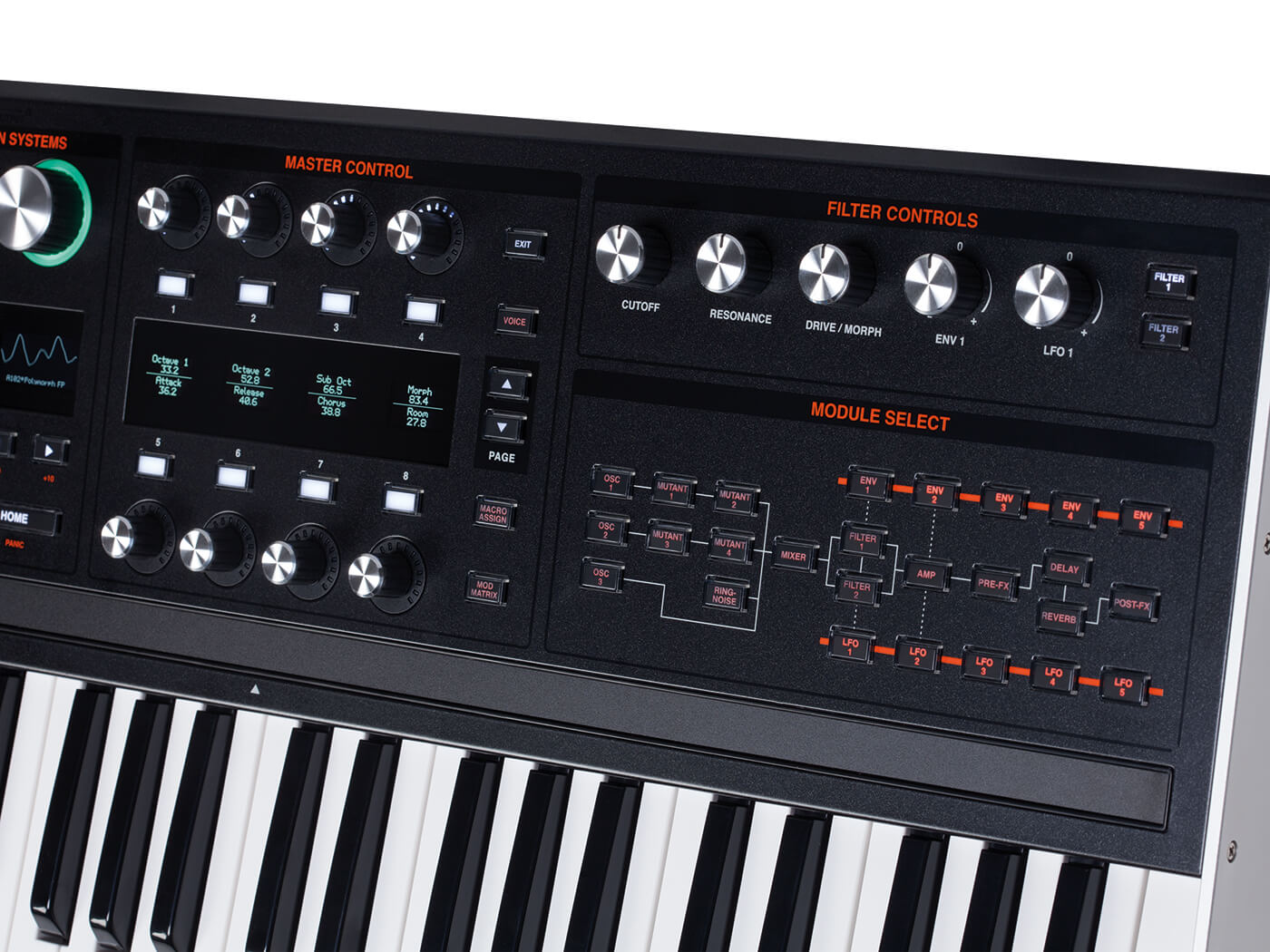 The mod matrix is the area where sources and targets can be set up for modulation routing and, as there are so many options here, it’s no surprise that this takes some getting used to. Once you’ve pressed the Mod Matrix button, the Master section lets you use the page up/down buttons to edit, reassign or add to existing modulation routings for your current patch. This is done via a series of button presses and the rotary encoders. Bearing in mind how many options there are, the process is much slicker than you might expect, even despite the amount of menu scrolling it entails.

The largest rotary on the synth, in the Main Systems section, is primarily used to scroll through sounds. Initially, I’d advise caution, as it will seduce your eye during the edit stages and with a single unplanned turn, that carefully sculpted patch you’re halfway through tweaking is gone, to be replaced by the next preset. There is a ‘Safe Mode’ which forces you to confirm you’re happy to ‘browse away’ from a currently edited patch but tread carefully until you’ve picked that option.”

The Hydrasynth’s keyboard features polyphonic aftertouch. Hold a chord, squeeze just one note and that note alone will trigger whatever assignment you’ve allocated to aftertouch, making for some extraordinary performance capabilities. Above the keyboard, there’s a freely assignable Ribbon controller. As well as allocating controller information to it, you can use it in theremin mode, gliding up and down to add new pitches to whatever you’re playing on the keyboard.

The multi-mode arpeggiator section is more like a VST arpeggiator than any we’ve seen on hardware synths. Its Tempo, Ratchet and Chance dials introduce randomness and occasional note doubling, to create ricocheting and unexpectedly fascinating variations. The Hydrasynth will even talk to your modular system; CV and gate outputs are joined by two modulator inputs that can be assigned inside the mod matrix. All in all, the Hydrasynth is deep, capable and unbelievably powerful.

If you work in DAWs, buying any hardware synth will require some justification. The Hydrasynth isn’t cheap but you get masses of content and potential here. The keyboard instrument is fun to play and much easier to program than it should be given the number of options onboard. It continuously kicks out brilliant and inspiring new sounds, and the ways you can shape and personalise them is practically limitless.

Plugging it into the front end of a modular system would lead to results that were even more jaw-dropping and, because it’s DSP-based, expect ASM to update it with new features to keep it future-proofed too. 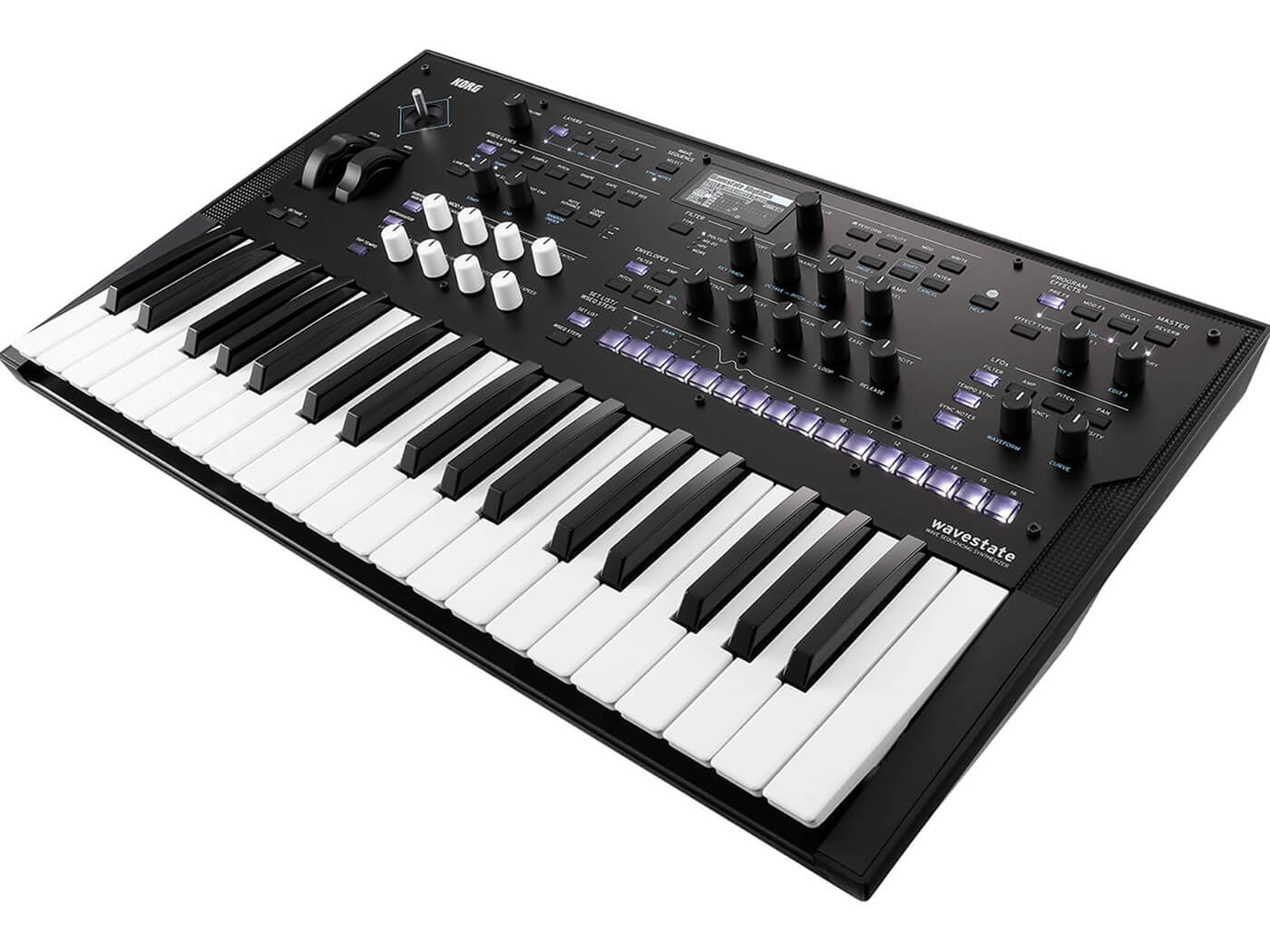 If it’s the sound-shaping elements that draw you to the Hydrasynth, seek out the new Wavestate from Korg, which draws inspiration from the original Wavestation but goes far beyond its predecessor in terms of features. 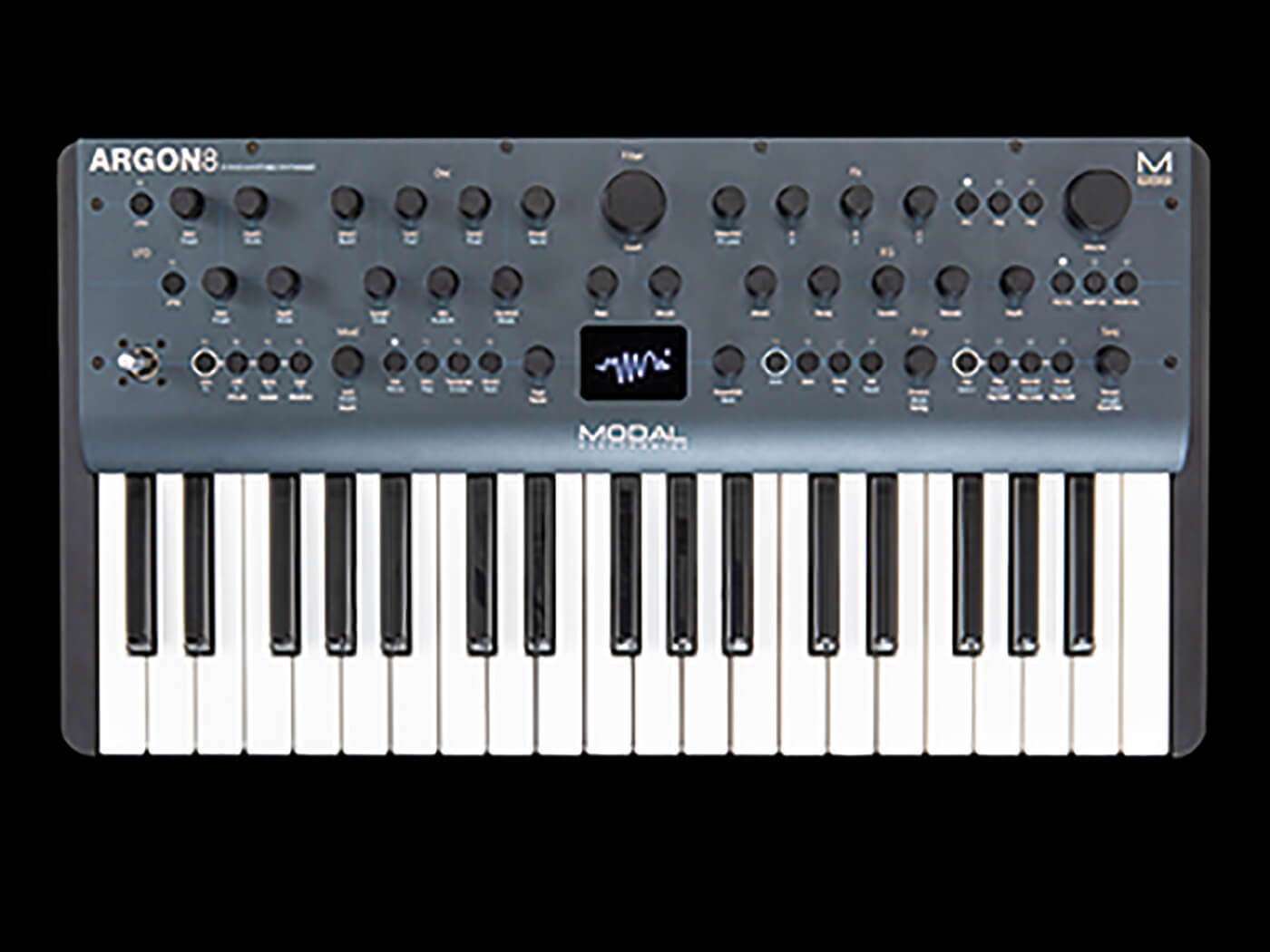 Though it doesn’t sport quite as many features as the Hydrasynth, the eight-voice Argon8 boasts wavetable synthesis with waveshaping, four oscillators per voice, and a range of potential sounds – and costs less than half the price.