The MusicTech Arturia MicroBrute review. The MicroBrute is the latest in Arturia’s hardware synth line, but at £269 it costs more like a piece of software. ‘Just how do they do it?’ asks Andy Jones… Details  Price: £269 Contact: Source Distribution, 020 8962 5080 Web: www.arturia.com Arturia made its name with a line of well-respected […]

The MusicTech Arturia MicroBrute review. The MicroBrute is the latest in Arturia’s hardware synth line, but at £269 it costs more like a piece of software. ‘Just how do they do it?’ asks Andy Jones… 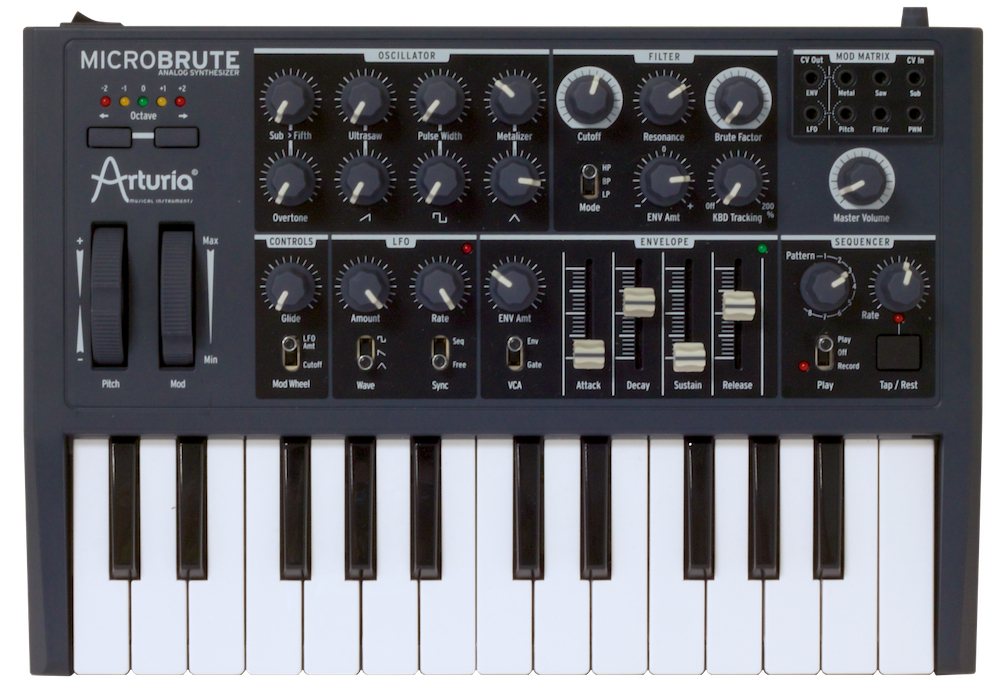 Arturia made its name with a line of well-respected software emulations based on classic analogue synths but like other companies it has had to follow a potentially more profitable hardware path, steering it away from the perils of software piracy. But can there be much profit in the MicroBrute, the company’s latest hardware synth priced at just £269? That’s for them to worry about and, quite possibly, for the rest of us to benefit from because, on the face of it, the MicroBrute does look incredible for the cash…

Analogue, Analogue
Yes, the MicroBrute is analogue, you knew that – every synth released these days seems to be analogue.After what seems like decades of people asking for analogue synths and synth companies saying they couldn’t source or afford the components, we’ve now seen new analogue synths by the dozen – components are clearly available and they must be pretty cheap these days.   The MicroBrute is, not surprisingly, a cut down version of the MiniBrute, so if you are familiar with that one, not only will the Micro be easy to get your head around but you’re probably also asking ‘what on earth could they cut out?’ The truth is, Arturia hasn’t cut as much as you might think or else it has implemented things slightly differently on the MicroBrute.

There’s no aftertouch on the 25-key keyboard and less waveform options on the LFO. Rather than the Mini’s arpeggiator, you get a step sequencer, so in some instances it’s not so much smaller but just tweaked.   But it is a good deal smaller in terms of its physical size. Weighing in at just 1.75kg (compared to the Mini at 4kg) and measuring 325x221x60mm this should be as portable as it gets, but sadly the Micro only operates on mains power. It’s a restriction that Arturia explains with “Sound quality was key. Using high current parts with larger voltage rails to get real sound means that more power is required.

This is why so many battery powered synths sound like toys and not like speaker destroying monsters of sound.” Fair enough.   It does feel well built, though, with chunky rotaries and very solid pitch and mod wheels and sliders and, while the Mini has an aluminium case, the plastic case on the Micro is certainly sturdy enough. The keyboard is a bit lacking, quite spongey but it’s not really a playing machine, this, and even if you have big fingers like mine the mini keys are large enough to navigate around. 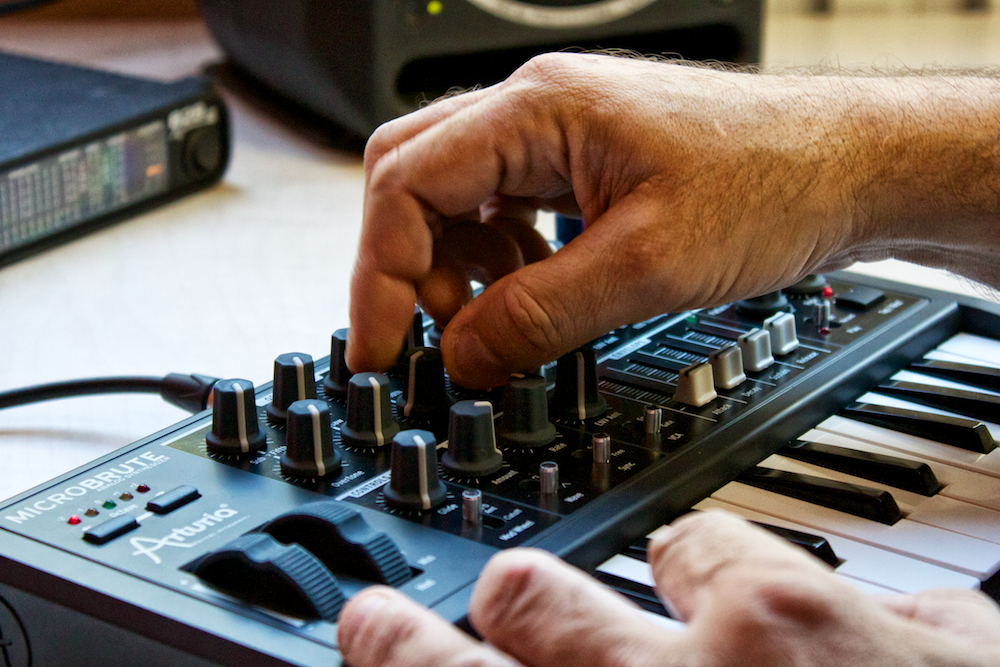 But What does it Have?
So that’s what it lacks next to the MiniBrute, but even though the Micro might seem to have less, there is still a lot going on. The analogue signal path is based around a single multi-wave oscillator which enables you to mix the saw, square and triangle characteristics of the oscillator. This is clever as it’s almost acting like three oscillators in one so upping the elements of each does vary the sound a lot and thicken it, even though it only has a single oscillator at its heart. There’s a new Overtone Sub-Osc which adds a fourth dimension to proceedings. Rather than this just sitting as a square wave an octave below whatever you are playing, Arturia has designed it to ‘bring in more complex harmonics’ to push it to a fifth above the root note – we’ll hear what this means in practice later.

As with the MiniBrute, the Micro features a Steiner-Parker multimode filter which offers low, band and hi-pass modes. Other features shared with the Mini include Brute Factor, Metalizer and Ultrasaw. Brute Factor is based on the kind of feedback loop that you would get from taking the output of a synth and feeding it back in. At a low level it adds some bottom oomph to proceedings but push it too far results in a fair amount of craziness, so use with caution. Metalizer and Ultrasaw are both ways in which the core waveforms are modified for greater effect. The former makes more complex and jagged waveforms based on the triangle wave for metallic effects while the Ultrasaw creates two copies of the sawtooth waveform to thicken it up.

Finally the sequencer. There are eight patterns on board and you can overwrite these by selecting Record and playing. This will replace the current pattern with whatever you play and all new sequences are retained on power down.

So we’re starting to build up a bigger picture here of a small synth that has extra sonic muscle – the Overtone Sub-Osc, Brute Factor, Metalizer and Ultrasaw – that should give it a much bigger sound that that promised by a simple single oscillator synth. Time to put that theory to the test…. 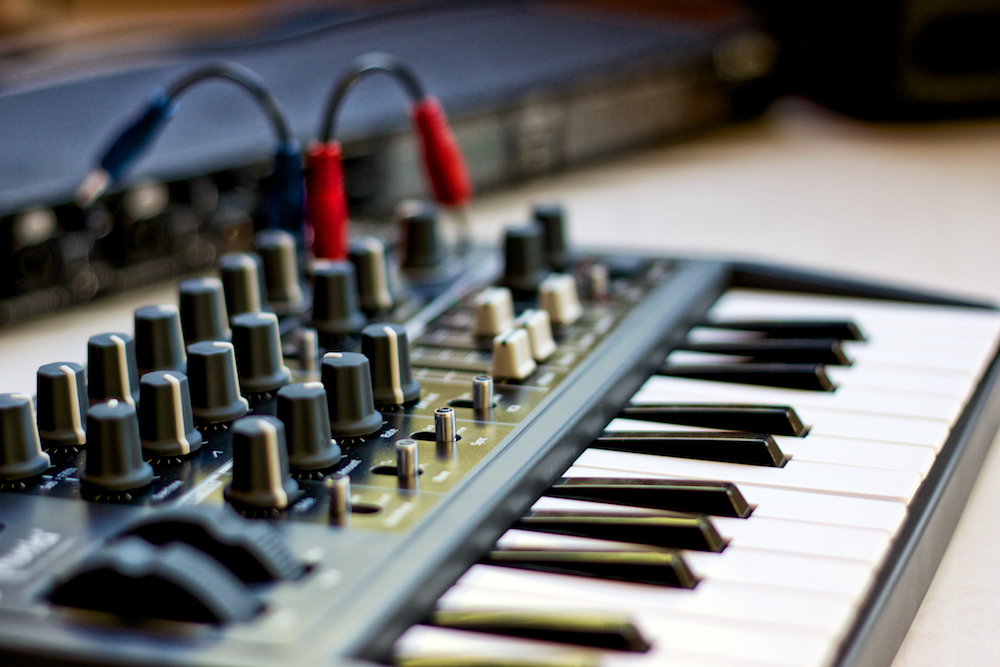 Big Sound?
In use you’ll enter the world of synthesis at a very basic level with no presets to throw you in the deep end and impress you – you are going to have to work with this baby, but in doing so you’ll get to know it in no time. Ours powered up with a simple square wave so we quickly mixed other elements of the oscillator in to fatten things up. The waves obviously add different harmonics but it’s the dials above each that add more interest. The Overtone control doesn’t add huge amounts of bass – just a subtle low and dialling it up takes the EQ in a kind of ‘up and over the sound’ motion; hard to describe but think of the EQ curve as a wave crashing over your sound.

Then we turned our attention to the filter section. We kept it in Low Pass mode to start with and, as ever, the filter and resonance suddenly add a lot of colour to proceedings. Brute Factor is great – in fact we’d urge you to crack into this straight away if you are disappointed with the synth’s ‘initialised’ sound when you switch it on, as this dial adds a lot of drama, pushing the sound over the edge of a chaotic cliff if you push it beyond a certain level.

Next we plugged in one of the two mini jack leads supplied with the unit into the Micro’s Mod Matrix section which allows you to route modulations sources (envelope, LFO and keyboard CV) to six destinations (Sub Overtone, Metalizer, saw, pitch, filter cut-off and pulse width of the square wave) so basically lots of those added extra sonic features we mentioned can be affected.

Taking the LFO output we plugged straight into the filter and suddenly the synth comes alive with movement. THE LFO has dials controlling amount and rate and is switchable between the three waveforms with rate synced or free. Next we changed the destinations to the Metalizer and Ultrasaw, the former offering dramatic rasping hoover movement, the latter with more subtle width variation. 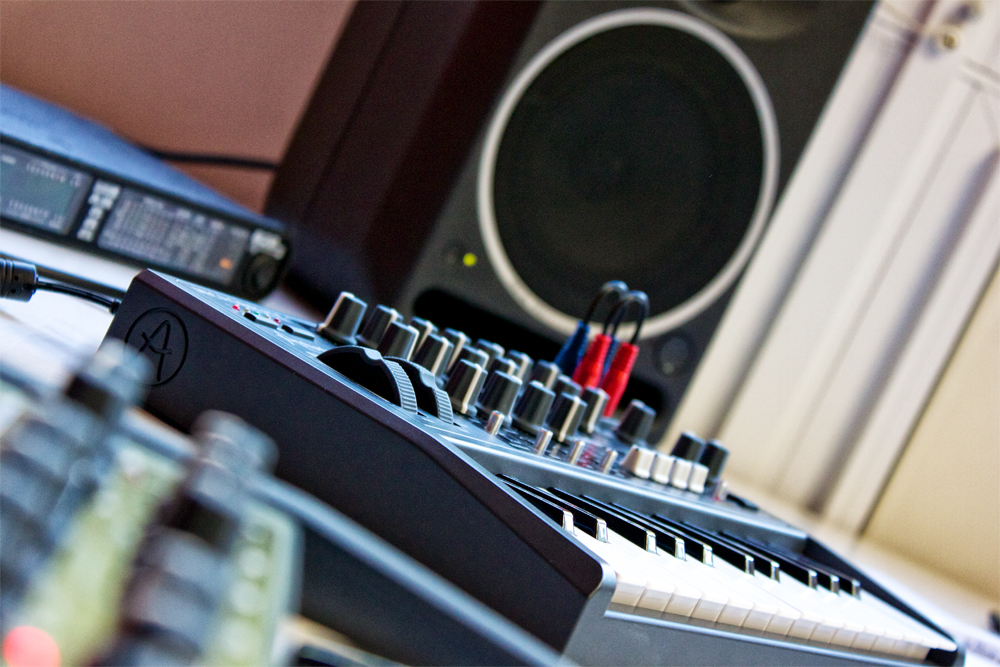 Clearly, then, there is a lot you can do considering the footprint size at your fingertips but don’t expect a preset packed machine where you can step through sounds to amaze your mates with. It does come with 10 old school presets though – by this we mean cards that you overlay on the front panel complete with indications of where to turn dials and knobs. There are even five blank cards for you to fill in once you have created your own sound (we could have done with a few more of these but you could always photocopy them).

So MicroBrute is all about switching on and exploring yourself and, importantly, having fun while you do it. On that score the sound of the machine is vital and I’d say that considering the size you will be impressed by what you get. It’s not as bassy as the BassStation II and Moog Sub Phatty that I compared it to (both of which contain more oscillators and a sub and, the latter especially costs a lot more) but it does have a growling edge to it and a snarling character that will win it fans.   MicroBrute is a lot of fun, it’s easy to get your head around and it should be the first synth students use to learn the basics of analogue synthesis.

Sure it has limitations but these almost force you to push it further to explore where it can go sonically. And with the additional parameters that you can easily control, such as Brute Factor and Metalizer – plus, importantly those interfacing options – this synth can probably go to more and varied places than any other single oscillator machine out there. It’s a crazy amount of synth for the money.

A great little synth that you can have a lot of fun with and use as the hub of a bigger network of gear. Superb value too.