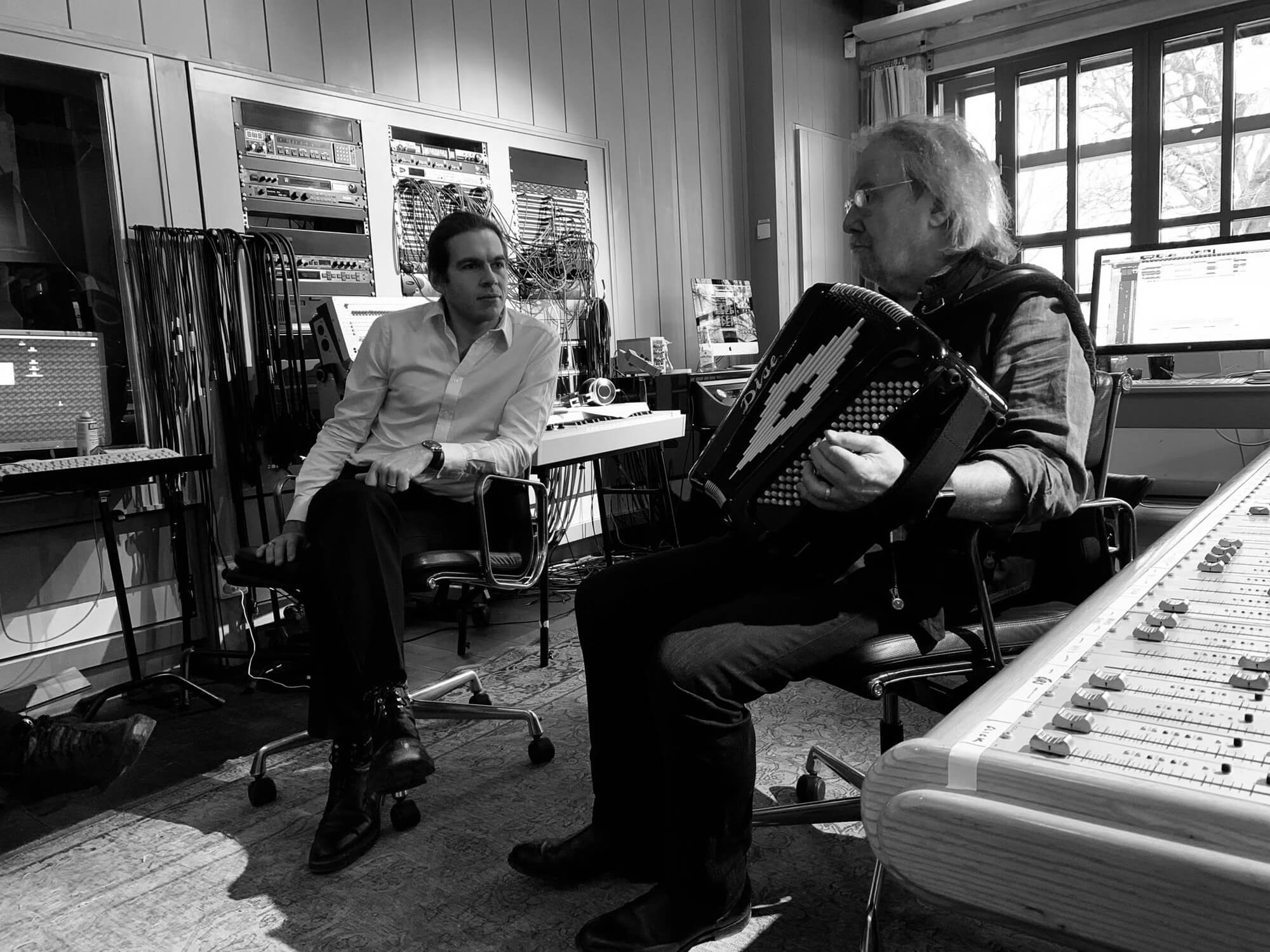 Former Klaxon James Righton on ‘Jim, I’m Still Here’ and why he thinks working on ABBA Voyage was “the highlight of my musical life”

James Righton is back with a new album with genius producers Soulwax. We learn how he tapped into his rockstar alter ego, Jim, to come up with one of the most oddball pop records of the year.

We’ve all experienced the ups and downs of COVID-19 over the past two years. But few have used the pandemic as a creative launchpad for a concept album about a failed rockstar alter ego living out their empty musical fantasies. Then again, James Righton is no ordinary music maker.

“I wanted to create this tragic character called Jim who is an alternative version of me,” he laughs. “It was born out of lockdown and only being able to play live streams to virtual audiences and emojis.”

You may know James a solo artist and one third of nu-rave enfant terribles and Mercury Prize winners, The Klaxons. If not, then perhaps as a musician for hire whose skills have adorned records by the Arctic Monkeys or even through working with ABBA on their mind-bending Voyage shows. For him, lockdowns meant a period of readjustment that led to the birth of new album, Jim, I’m Still Here.

“I fell in love with the idea of this character who never played a gig in front of real people,” he explains. “I thought it was so tragic yet so interesting.”

A pandemic of creativity

Before making this album, James had no intention of writing and recording a new collection of music. Around March 2020, James released his debut LP, The Performer, and was preparing to go on tour to promote the record.

“Then the [COVID-19] lockdown happened and I ended up at home, “ he says. “We have two kids so to keep some sanity, myself and my wife gave each other an hour each day on our own to do what we wanted. I spent my time during this strange period in the bottom of the house just playing and writing.”

With an album just released, James, like the rest of us, had to figure out how to exist in this new world. Rather than touring, he was asked to do Instagram takeovers and perform virtual events.

“It was so weird because they started off very innocently and easy, “ he explains. “It would just be logging in on your phone, taking over for an hour and performing. Then it expanded to incorporate different camera angles, getting the right lighting and recording into Pro Tools.”

It was from here that ideas around a musical character who was a different version of James started to emerge. Amid the multiple identities, his focus was to draw on what he was experiencing and make the lyrics as personal as possible.

“Once I found the persona of Jim, the writing happened very, very fast,” he explains. “I had this story, an idea of what I wanted to be and sang about how I and my other self were feeling.”

Much of the writing was undertaken while homeschooling his daughter, sitting alongside her during Zoom lessons. With the kids learning maths and English, James would be inputting song ideas and titles into his phone.

“I wrote all the lyrics to these songs without touching an instrument, which is something I would never usually do,” he says. “When I had that hour to write, I’d have the words and ideas of what I wanted to sing, which is usually half the battle when it comes to making music. Then I started sharing folders with Dave and Stephen from Soulwax, including references and what the palette might be. It was a really cool way to work.”

The robotic funk fingerprints of Soulwax are all over Jim, I’m Still Here in terms of sound and energy, and the album has been released via the duo’s Deewee imprint. James’ process would begin at home experimenting with sequencers, then when he had found a sound or idea he liked, it would expand via a back and forth with the Dewaele brothers.

“Without the internet, we couldn’t have made this album,” James explains. “All the music was created remotely without any of the perpetrators in the same room.”

The music would start to take shape through different iterations and demos and the pooling of influences and references. When the instrumentals were in place, James looked to replace the guide vocals with more polished versions. Using various vintage microphones including a Sennheiser MD 421, James would offer up four or five takes for each track.

“I wanted Dave and Stephen [of Soulwax] to have plenty to play with,” says James. “When you’re emailing, there’s a bit of a lag in the process so it was just me in my head trying to think of the best way forward without them there.”

Since the end of the Klaxons in a puff of indie rock, glitter and dancefloor chaos, there’s been a sense of freedom about the creative path James has followed. He’s kept himself busy with various different projects and guises.

“I spent a long time banging my head against the wall, creatively,” he says of his past musical endeavours. “Now, it’s just about getting into a room when I feel like it without any pressure. My music is just the sound of me getting lost in the process and I think you can hear how much I’m enjoying myself.”

An enviable collection of vintage synthesizers beat at the heart of James’ sound, a hoard he’s been building for years. From various space echo effects units and the Eventide H910 Harmonizer used on David Bowie’s Low, to the Prophet 5 Rev 2, which the majority of Jim, I’m Still Here was written on – best for “little sonic motifs and lead lines” – via a Yamaha CS60 bought years ago in “a cash-in-hand transaction in a car park” – he’s been an avid accumulator.

“I’ve got way too many synths for my own good,” he says. “But it was always going to be a synth-led record without a band or an external studio to work in. Many of my favourite songs were born out of discovering new pieces of gear and learning how to use them.”

Vocally and sonically, James is proud of the album and the sheer amount of character in his voice. The process in terms of the isolation and lack of instant feedback all helped shape the finished sound.

“I’m really happy with my vocals and think it’s the best record I’ve made in terms of sound and personality,” he says. “Maybe it’s to do with the way I’ve let Jim, my alter ego, come out in the music.”

Citing Tin Drum by Japan as a key influence, an electronic record that still sounds original and futuristic despite being made in 1981, there’s raw emotion jutting out of many of the songs. Lyrically, James has pulled on intense heartbreak with Day at the Races capturing how he felt following the tragic passing of a close friend during those first few weeks of Covid.

“I think the words captured the tone and ceiling of that time,” he says. “I can still hear a shock and a kind of emotional coldness and detachment.”

Release Party is a special track with a funky wonk reminiscent of an English Prince, existing in a world James has “never been into before”. Touch is another highlight he began at ABBA’s studio in Stockholm.

“I’d been in Stockholm for three weeks working on the ABBA show rehearsing with the ABBA Voyage live band, and one night after working with Benny [Andersson], I spent an hour with an engineer and the [Yamaha] GX-1, this legendary synth,” he says. “I did an hour of recording and when I revisited it, there was this really cool riff in there. Touch came out of that.”

A landmark event in popular music right now is the return of ABBA and their futuristic, avatar-tastic live show, ABBA Voyage. James has been involved in putting the band together, auditioning various musicians at Paul Epworth’s Church Studios.

“We basically went through different combos of the potential lineup with Benny and Björn Ulvaeus, then we picked the final line-up,” James says of his role.

“Benny hadn’t heard Eagle played live for years. We learned it overnight, then came back to the studio to perform this 20-minute version. It was magic being in that room with one of my favourite songs being played by these amazing musicians.”

“Being in the studio with Benny was one of the highlights of my musical life,” he continues. “I’d be on the desk going through the stems of ABBA hits, so for tracks like Dancing Queen and just isolating parts. I found that so incredible to hear the details.”

Now the ABBA Voyage is well underway at its bespoke London venue and Jim, I’m Still Here has been released, tours are promised while James has already begun working on the next album. Rather than working alone, he’s keen to get out there and collaborate with other musicians.

“I loved working with the Arctic Monkeys at La Frette Studios, just recording to tape and doing three takes of each song,” he says. “I love making music alone but it would be nice to get out of the room and out of the box. There’s something wonderful about playing with other people in the same space.”

Visit deeweestudio.com/jim to find out more.