by Will Betts
#Artist/Producer/DJ
Features

HONNE’s Andy Clutterbuck: “We didn’t want to be two guys stuck behind a laptop”

One half of the soulful British electronic R&B duo talks to us about touring gear, creating a distinctive sound and found-sound beats. 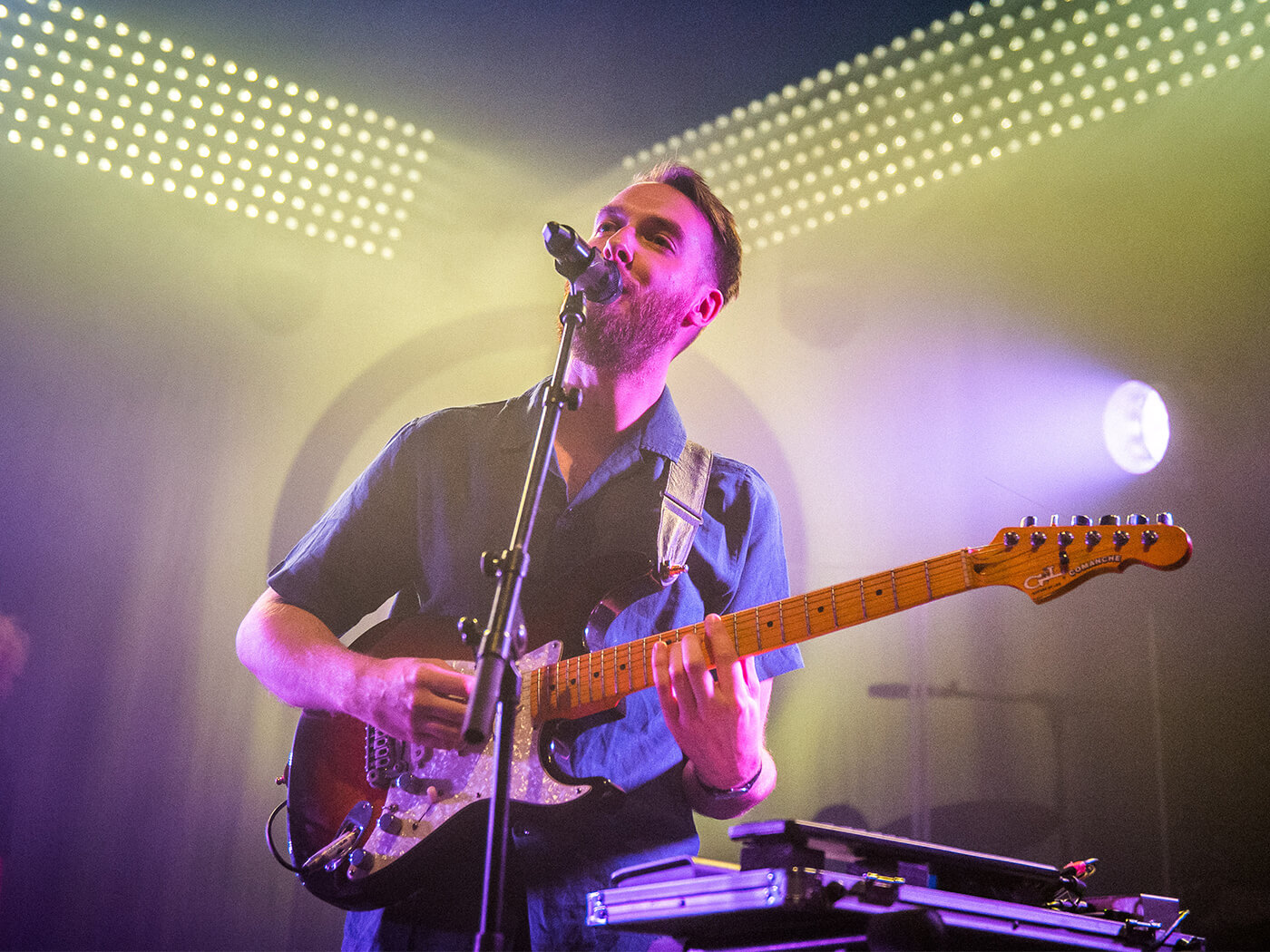 Andy Clutterbuck of Honne performs live on stage at Village Underground on May 8, 2018 in London, England. (Credit: Joseph Okpako/WireImage/Getty)

Their debut record Warm On A Cold Night was a masterclass in synth-fuelled R&B, and their music has been described by one music critic as “futuristic soul destined to re-invent babymaking music”. Now HONNE – with US, Europe and Asia tours completed in support of their sophomore record Love Me / Love Me Not – are returning to Asia for more tour dates.

We catch up with Andy Clutterbuck, one half of the East London electronic R&B duo to talk on-the-road music-making, favourite studios and how he’s found making all the visuals for the new live show.

You and collaborator James Hatcher have duplicated the studio setups. Is everything still written in one or other of those studios?

We’re still working mainly from my studio or James’ studio. The two spaces are virtually like for like. We have the same Adam A7X speakers, and we both got a Nord and we both got a Prophet. It is very similar. I think we decided to do that so we could mix and match and continue working on the song regardless of whether we’re at my studio or his studio.

It seems to have worked alright. Maybe it was stupid buying the same speakers cause we could have bought two different sets of speakers and then compared the mix.

Are there any other studios you love to record in?

Yeah, we went to one recently. We worked with SG Lewis on a track, and he was finishing off one of his albums with Guy Chambers who has a studio in West London called Sleeper Sounds. It’s all in one big room – it’s amazing. I walked in and I was like “Oh my days, this is incredible.” We’re potentially going to look to go in there ourselves. I think that it’s a perfect place to just go in and record extra bits and add the finishing sparkle to the record.

That studio is packed with great instruments. Are there any pieces of gear or instruments that you love in the studio that you just can’t take on tour with you?

There’s the TC Electronic VoiceLive. It’s a large pedal and it’s great for all the vocal harmonies and in particular the Auto-Tuned, Bon Iver style vocals. We’re thinking about getting that out on the road.

Is that sound something you’re doing more?

Yeah – we’re experimenting. It’s early days. Obviously, we’re trying hard not to come up with songs that sound exactly like Bon Iver. And it’s quite difficult with that sort of effect. So that’s was one piece. I’ve also just bought the Teenage Engineering OP-1 – they’ve just re-released that and that’s incredible. I love it.

What are you using it for?

It’s just for writing, really, but I think because it’s so small and neat I’m just going to take it in my bag and on flights, I’ll get it out and fiddle with it but it’s really cool for coming up with basic loops. It’s great.

Can you tell us how you go about creating a groove?

We get a basic beat down and then it’s all about adding character for us. We’ll try and record sounds – it sounds stupid – but even on our phones as a Voice Note, making little noises with our mouths, or slamming a door or jingling keys or whatever it is. I’m just adding that into the beat.

You’ve created a distinctive sound with HONNE. What advice would you give to other artists trying to create their own distinct sound?

When we first started out, we concentrated hard on creating a sound. For the first album, it was very Prophet heavy with 808 drums with my voice, and that was basically the whole album.

We thought to ourselves that after a while it got a bit monotonous for us to just keep writing songs that way. So, for the second album, we explored a bit. But, I think it was that kind of foundation that we’ve made that helped put us on the map a little bit and you know, every time a song of ours came on people could be like, “Ooh, that sounds a bit like HONNE” with a twinkly Prophet sound with some nice chords. That’s kind of where it all started.

Writing for the second album we could explore a bit more. Because my vocal was one of the main things that would carry on, the sound underneath could potentially change a bit more.

In what direction is that going to change?

We’re experimenting now for the next album. I think cause we’ve played live so much over the last couple of years, in the back of my mind I’ve always got the live show, and how the songs will work in a live format. Sometimes now on some of these new songs that we’re writing, they’re kind of sparse in places but we’re just trying to make the most of small things. So, even if it’s just a kick drum, just trying to make that kick drum sound huge. Just imagining a massive kick on a huge PA, I’m sure it would be incredible and the way the lights would work with it and all that sort of thing.

A lot of people leave saying “I wasn’t expecting that.” Hopefully, they mean it in a good way

How do you translate the older material to stage for the tours?

When we play live, I mean the music itself is quite electronic. There aren’t many live instruments on the recordings apart from keys or piano and guitar. Also, live we have a drummer that comes with us and a bass player and a backing vocalist as well. We’ve taken our songs and rearranged them for the live format because we didn’t want to be two guys stuck behind a laptop. We want people who come to our shows to experience our music differently. A lot of people leave saying “I wasn’t expecting that.” Hopefully, they mean it in a good way!

Halfway through our Manila takeover. It’s been wild! Who’s caught one of the shows?

What can audiences expect from the live show that you’re bringing to Neon Lights in Singapore and the rest of Asia? Are there any set highlights that stand out for you?

We’ve been playing live for a few years now and I’ve decided to take it on myself that I will come up with the visuals as well. I love it. We’ve got these tiny Osmo Pocket cameras that fit in your pocket. They each have a built-in stabiliser and shoot in high definition. You can hold up it and point it at the sun, or whatever. And then I put it into Adobe Premiere and fiddle around with it, and it seems to work. I’m not a control freak but I just love doing everything in-house. Sometimes when you explain “I want a video like this” or “can you make this content?”, it never quite comes back how you envision it.

It’s a bespoke visual for each night?

Yeah, it is. It’s all created by us. It’s the first time we’ve done anything like that and it’s quite cool.

HONNE are on tour throughout Asia now. Find more information on their site here.