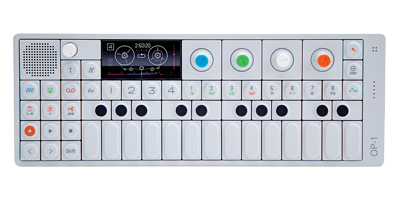 We have a lot of love for Teenage Engineering here at MusicTech. The Swedish company has wowed us two years running with its Pocket Operator series – six quirky music makers in unfinished calculator form. Don’t let that last point put you off – given their size, they really are extraordinarily powerful.

And you can say the same about this, the OP-1. The unit’s actually been around for a long time, around six years, but we never looked at one on release (before my time – no idea why!) but have been looking for an excuse to get one in, and that excuse has just arrived in the form of a big software update. Before getting to that, though, I really should give you some background and tell you what the OP-1 actually is…

…to tell you what it isn’t, because OP-1 is a synth of many flavours: a drum machine, a sampler, a sequencer, a multi-track recorder, a controller…

And in typical Teenage Engineering style, they’ve even thrown in an FM radio. Well, why wouldn’t they?

Consequently, OP-1 already has a huge fan and user base bolstered by its leanings to make a lot of varied and great noises. This is helped in no small part by its ability to easily extract them, get them onto your computer via USB, or upload your own sounds into it. You can even sample the FM radio if you want, and make drum sounds out of it. Yes, it’s that kind of machine.

Quirky. That’s a word I’ve already used twice in this review and tried to avoid, because it does Teenage Engineering a bit of a disservice. Yet when you get into the operating system and discover the wonderful graphics, the unusual effect names and the way everything interacts and how easy it is to control, you can’t help thinking that it’s all a bit different – but in a damn good way.

OP-1 is a surprisingly sturdy unit. There are five main rotaries that control the main volume and four parameters depending on what you have selected (and the Shift key often allows these to access more).

The screen is incredible – loads of detail, loads of graphics and it really comes into its own when you combine it with the rotaries. There’s a Quick Start guide on the website that gets you going, but in order to really ‘get’ OP-1, you’ll have to read the more in-depth online guide, as it’s not initially obvious just how deep you can go. As it turns out, the answer is ‘very’…

There are four main Modes – Synth, Drum, Tape and Mixer. In Synth Mode, you can choose one of several engines (see Key Features), including the new Voltage ‘electric synthesis’ engine that is part of the new OS update.

These engines are accessed on the ‘1’ button beneath the screen, while the remaining buttons (plus Shift in some cases) allow you to alter the envelope of the sound, the effects, LFO parameters and routing. The effects are bonkers versions of sometimes standard effects and include a phone-like one and another with a cow graphic called CWO. Yes, I said a cow. This is TE, remember. Of course there’s a cow…

The most beautiful thing about the OP-1 now comes into view on that screen. Whatever you select – Synth Engine, FX, envelope etc – has its own graphical representation with different colours for different parameters, which you change with the corresponding coloured rotary.

Indeed, this makes up a large part of the operating system of OP-1 and makes it a thing of joy to use and so easy to get in there and tweak sounds. You might not know what you’re changing – the user guide is your friend here – but you will change them and go on some amazing sonic journeys.

Similarly, in Drum Mode, the rotaries control other correspondingly coloured parameters like Pitch (blue) or Loop (red). They are also used to mix levels in Mixer Mode, again by colour for each track; but not so much in Tape Mode, which has its own section of Transport controls – see the picture above.

Making recordings is easy, as is copying. Undoing is not so easy – make sure you select new tracks. Recordings can be resampled as whole songs and, when linked by USB, you can easily transfer the whole song, multitracks or individual sounds to and from the unit (it appears as a drive on your desktop).

2: Track and Parameters
Select which track in Tape Mode or envelope, effects, engine etc in other Modes.

5: Great Screen
Loads of fine detail on show and those coloured parameters are linked to the rotaries.

7: Microphone
Sample from the outside world directly here…

8: Speaker
The onboard speaker is louder than you might think and placed next to a volume rotary.

So that’s the recap on what OP-1 is and has been for the last few years. The new stuff is pretty exciting, too. The new Voltage synth engine appears as a spark graphic and the rotaries affect everything from distortion to tuning.

I can only describe its sound as like an old radio tuning in and out, with sounds going from crystal clear to cranky and deranged and as you turn dials. Lots of mellow sounds and lots of grainy ones – a great addition.

The update adds presets to many of the other engines as well. There’s some great stuff been added: some wild sounds, drums and a lot of big dance stuff, but also some fantastic dreamy presets. I say again, this small unit does some very big sonic stuff.

I haven’t touched on the OP-1’s sequencer section as yet. There are seven Modes, including a new fully featured arpeggiator, which again makes great use of the rotaries to engage Hold, change Trigger Mode and time signatures.

This and the other Sequencer modes mean that there’s every conceivable way to record notes – I particularly like Pattern (play the notes on a grid) and Endless Mode (now extended to 128 steps).

One of the final main updates includes a much-asked-for Sync feature with several modes: Free where everything works independently; Beat Match to sync with external gear; and Sync, where OP-1 is synchronised with external MIDI clock via USB. Needless to say, you can now sync OP-1 to Pocket Operators and it can also send a sync out to modular devices, meaning that OP-1 can be as an effective controller as it is a synth.

You want mobility and there are stacks of options. Korg’s Volca range is expanding by the day and offers great sounds and linkability. Teenage Engineering’s own PO Series (now six models) is a cheaper way to enjoy the TE philosophy. Then, of course, there’s the iPad or Tablet, with the former especially offering cheap apps for music makers who love touch.

Throw in some other features and this is a great update to an already fantastic machine. Of course, mobile music making has moved on in leaps and bounds during OP-1’s life – the iPad has come of age, especially – but there’s a lot to be said for tactility and quirkiness (damn that word again).

All in all, this is one unit that could easily make you stand out. It’s not cheap, but then again, what price individuality? 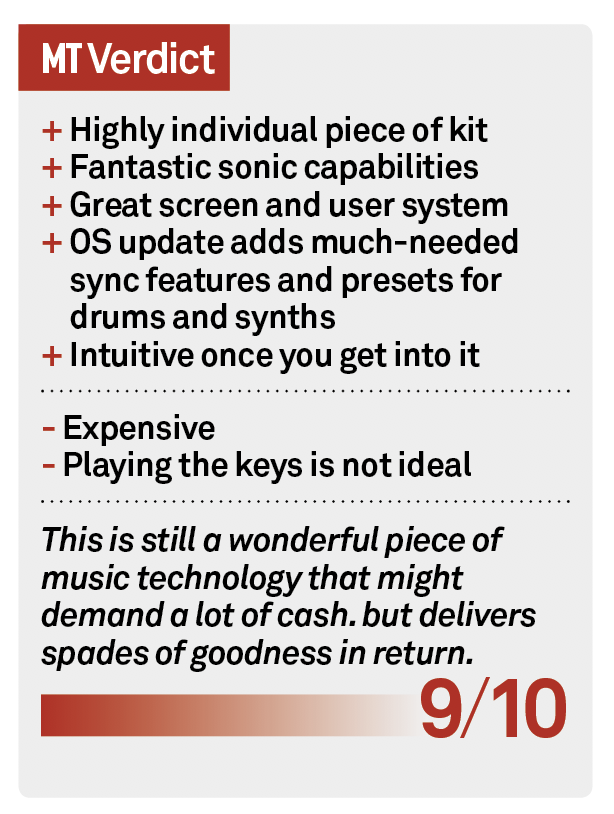