With a sound that rings on almost eternally through countless tiny reflections, the vastness of the cosmos is truly apparent in Strymon’s NightSky. 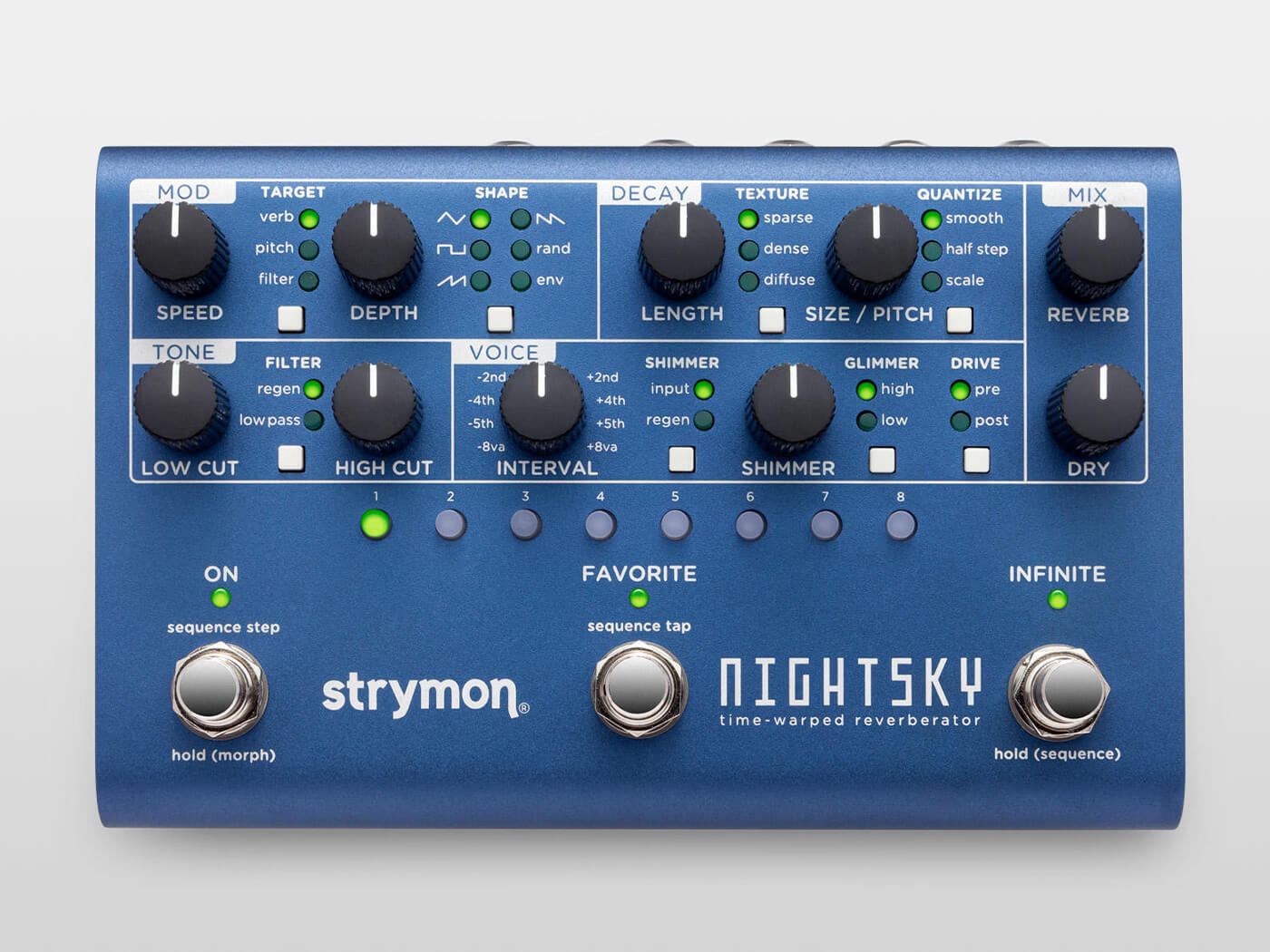 Designed for the studio and a fantastic pairing for soft synths, the NightSky adds an extra dimension with its intriguing modulation capabilities. If you’re looking for a reverb that’s weirder than the BigSky, this is it.

For pedal aficionados, Strymon releases are always worth exploring. Its most famous pedals include the TimeLine Delay and the BigSky Reverb pedal, with the latter lending its qualities to this new model. The NightSky is a stereo time-warped reverb unit and contains sockets for both left and right on the rear. The BigSky is commonly used by keyboard players as a reverb, as well as by studio users and a wide range of musicians that don’t fall into the pedal’s target market of guitarists. With that in mind, Strymon designed the NightSky to appeal specifically to studio producers, and even included a line/instrument switch on the rear for connecting signals at the correct level.

We wire the NightSky into our rig via outputs three and four of our Audient iD44, flick the switch to line level and send some piano through it. The first thing we do when we hook up a new pedal to our studio rig is fiddle with its controls to see what noises we can coax from it. The first section we explore here is the decay, where a lot of the pedal’s most extreme settings are located.

The decay section features two rotary controllers and two buttons for selecting different reverb algorithms. The first button cycles between reverb textures: sparse, dense and diffuse. The sparse setting features obvious reflections and is the most reminiscent of a physical space. The dense reverb sounds closer to a plate reverb, while the diffuse is a beast that creates big unnatural reverb swells that bloom as the effect evolves.

The decay-length knob adjusts how long each of the reverb tails for these algorithms lasts. Turning it fully clockwise creates near-infinite sustain, with the size/pitch knob shifting the pitch of the reverb tail by up to an octave in either direction.

These sounds are ideal for creating huge ambient expanses, and the ability to change the pitch of the reverb tail is superb for adding depth, sparkle and brightness, depending on whether it’s shifted up or down.

In addition to pitch-shifting the reverb tail with the size/pitch knob, the NightSky has a dedicated shimmer function that allows additional pitches to be added to the reverb tail. Shimmer functions usually add an octave up to create a bright and ethereal sound. With the shimmer knob turned fully clockwise, the NightSky offers this too. But there’s also a variety of other intervals accessible here, including second, fourth, fifth and eighth, and, importantly, all the same options below the original signal in the anti-clockwise direction.

When combined with the size/pitch functions, it’s possible to form reverbs that generate two different intervals simultaneously. This is particularly pleasing on keyboard instruments and especially effective when you route synth pads through it. The extra octaves create a thick texture capable of beefing up soft synth sounds that might otherwise be too thin.

Glimmer adds additional harmonics to either the high or low frequencies of the reverb tail. This adds extra depth to the reverb tail and creates an extraordinarily large sound when combined with the shimmer.

The final section in this part of the pedal is the drive control – and it’s probably the least valuable section of the pedal. A well-distorted reverb tail can sound spectacular, but this drive was too fizzy and untidy to our ears. A tape-saturation effect might have been better here, but the drive remains useful should you need dirty reverb in a hurry. 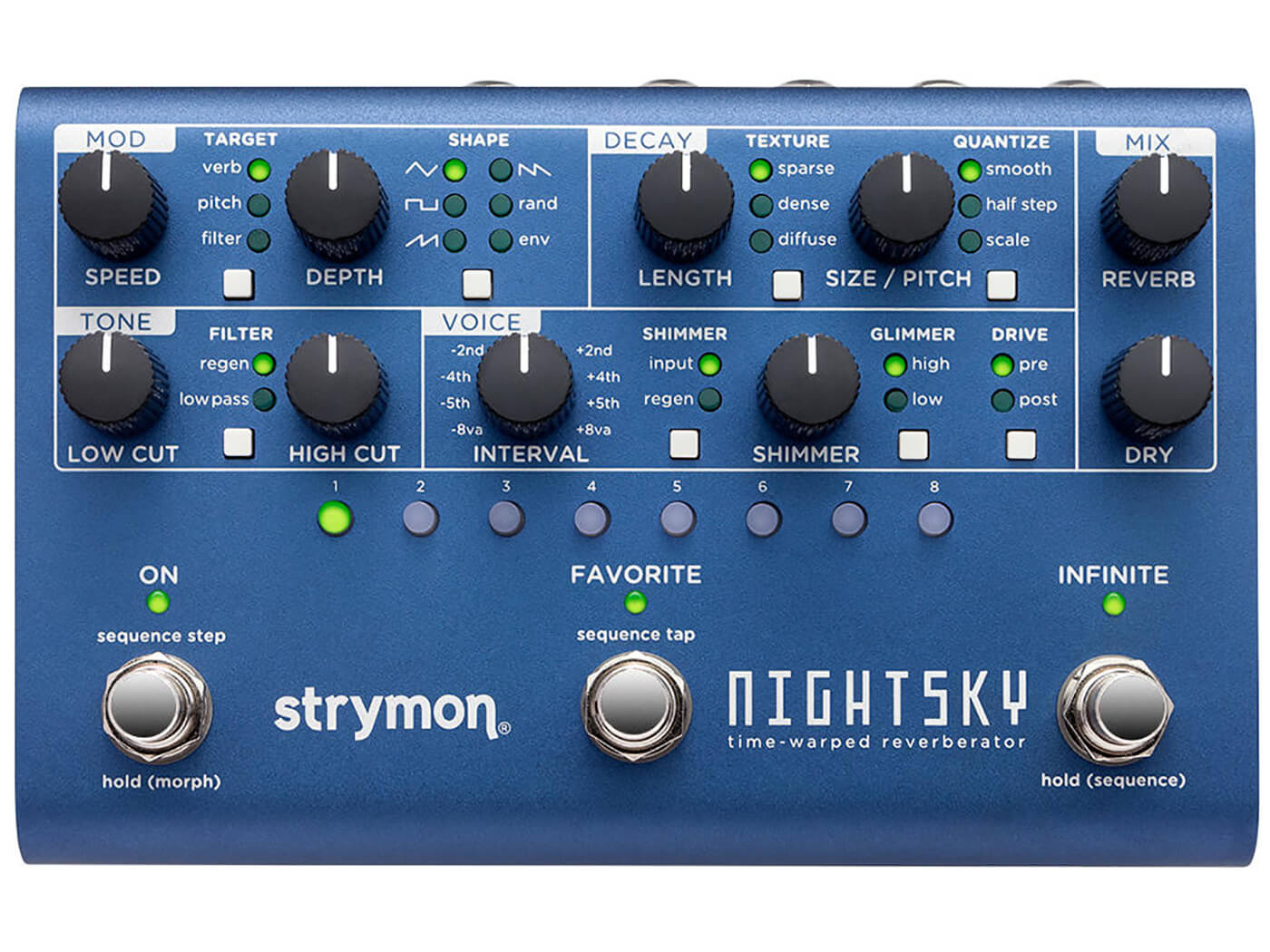 The NightSky’s modulation section is where things start getting otherworldly. The ability to modulate three different sections of the pedal allows for a broad range of sounds. The functions themselves are self-explanatory, with speed controlling the LFO rate and depth controlling how much is applied to the destination function. There is a range of waveforms available, and it can also follow the envelope of the incoming signal.

By using the envelope-follower setting on the EQ section with the EQ set to act as a low-pass filter, for example, you can easily add squelching filtered reverb to synth sounds.

Across the NightSky, you’ll see a function labelled ‘regen’, short for regeneration. This is a feedback control. As reverbs comprise countless echoes caused by sounds bouncing off different surfaces, the idea here is that, with regen mode enabled, each time the virtual reverb is reflected, the effect is applied again. Applying the effect on input to the virtual reverb tank ensures that the effect’s intensity remains the same throughout. Making it regenerative, however, will reapply the effect each time it repeats. The result is that the effect gets more intense as it decays. Combined with canny manipulation of the decay length control and several other functions, this can create some outstandingly intense effects.

A unique feature of the NightSky that separates it from other bespoke ambience pedals is its step sequencer, with which it’s possible to program different pitches from the size/pitch knob into the eight available steps.

You can trigger the sequencer automatically via tap tempo (the middle footswitch) or by step, should you want to change the pitches manually. The NightSky can be synced to MIDI too. When moving between steps, you can alter the pitch suddenly or glide smoothly between them. The glide time is a secondary function accessed by holding the modulation-shape button and turning the mix knob.

The sequencer permits experimentation with octaves, fifths and even allows you to programme chord sequences. However, we don’t see the point of the sequencer. If you’re using the NightSky in tandem with a DAW, you’ll likely have access to a functioning sequencer already. Yes, there is an option here to have moving reverb pitches in step, but we’re not sure we’ll ever have cause to use it in a studio context.

The NightSky has 16 onboard memory slots set in two banks of eight (and 300 via MIDI), accessed by the middle footswitch when not in sequencer mode. The memory stores every setting, including your sequencer settings. This is handy for creating beautiful reverb sounds and moving them between studios – just save your presets, take your pedal and plug in.

There are many secondary functions on the NightSky, including gain for the drive setting and resonance peak for the low-pass filter. These aren’t high-footfall settings, but we still have to refer back to the manual every time we try to use them. We appreciate that space on the pedal is too tight to label them there, but they aren’t in the quick-start guide either.

The sky at night

The NightSky is an amazing pedal with powerful features that will be useful to producers everywhere. As you’d expect from Strymon, the ambient sounds are stellar, and the ability to add harmonics, shimmer and other modulation types to the reverb tails makes for inspirational results.

There are, however, a few functions we can’t get our heads around. The step sequencer isn’t terribly useful. Even set very gently and with lots of glide, the movement of the pitch in the reverb tail is too jarring and prevents our sounds from sitting well in mixes. If you want to create sequences to play over, a dedicated loop pedal or DAW will do the job better.

Even still, few pedals offer the functionality that the NightSky does. The speed with which it’s possible to create enormous textures is impressive, and that ability to create sounds quickly represents everything we love about pedals. The instant gratification of turning knobs and focusing on music-making is important to us – and in that, the NightSky delivers. 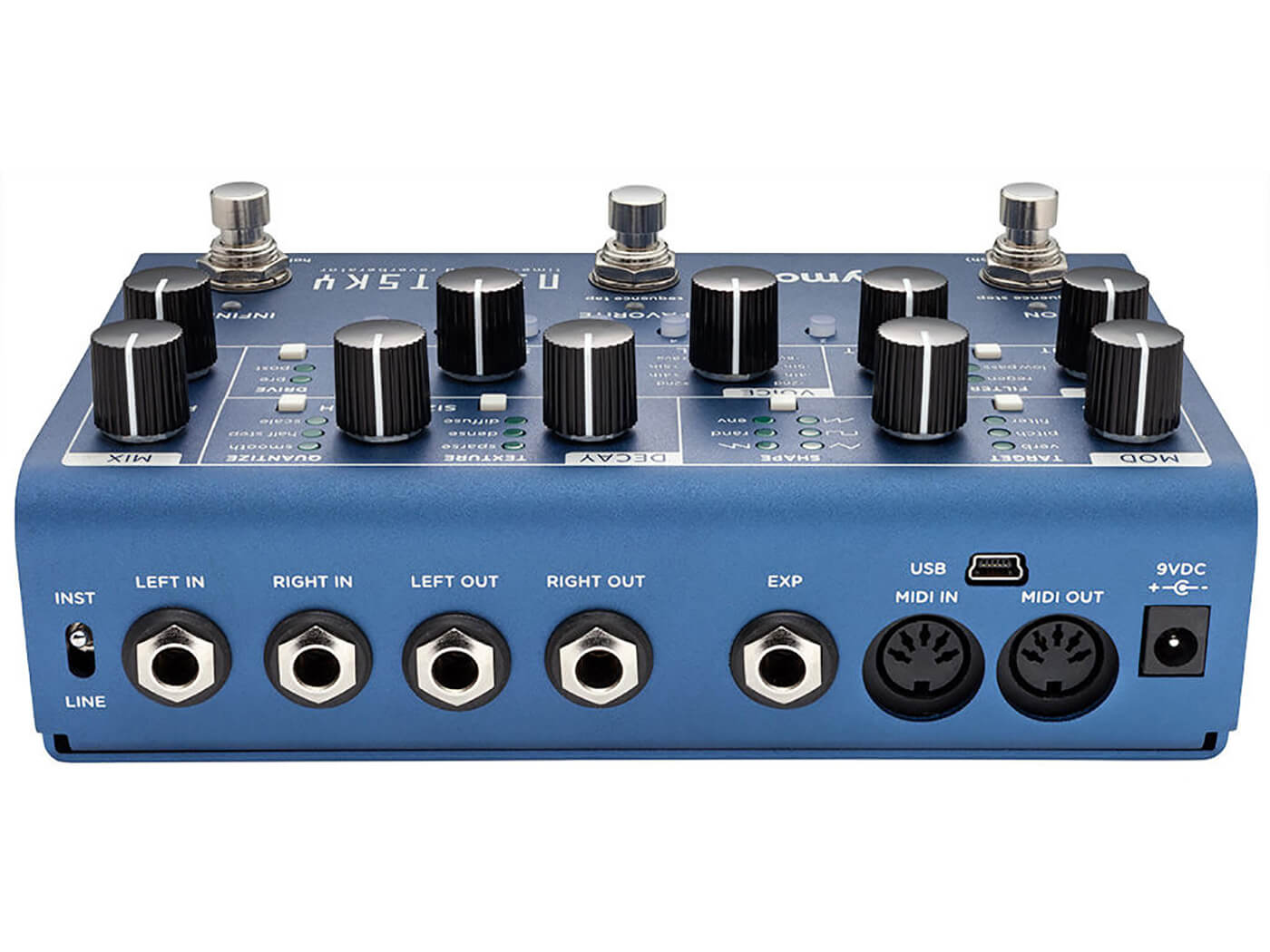