How to create ambient shimmer pads in Logic Pro X

An intriguing way of routing audio plug-ins can unlock a world of ambient ‘shimmer’ pad effects that’s quite unlike traditional sound creation methods. 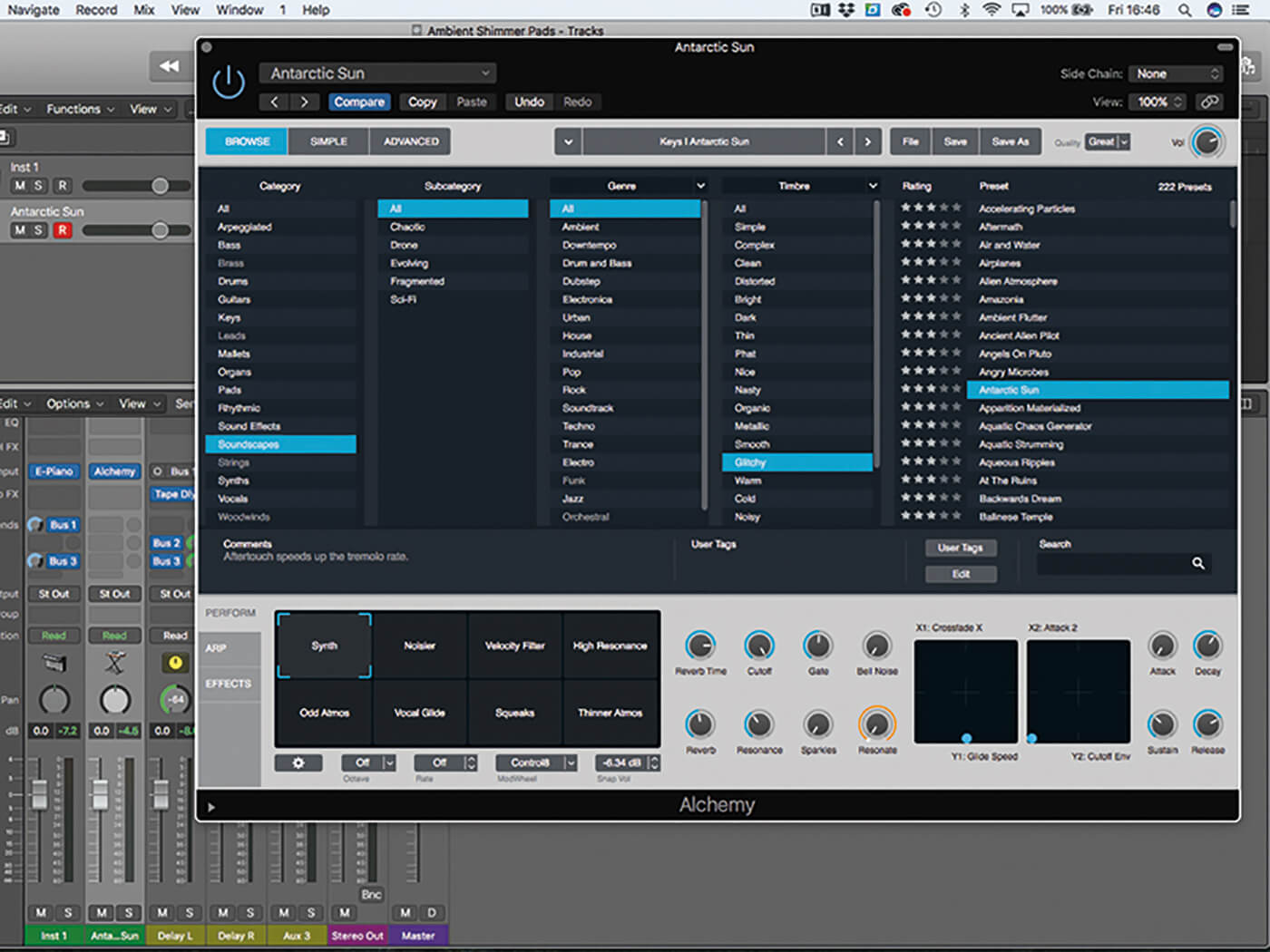 One of the most intriguing aspects of working with a DAW is the blurred line between the software working as a production tool and as a musical instrument. In many ways, the combination of virtual analogue instruments, samples, audio effects and mixer in Logic Pro X could be seen as one giant synthesizer, capable of producing a range of different sounds. In this workshop, we are going to explore a particular sound type – ambient ‘shimmer’ pads – but as you will see, it’s as much an exercise in effects routing and the creative application of reverb as it is in the typical tools of sound creation and synthesis.

The sounds that we’re exploring are inspired by the textures created by Brian Eno and Daniel Lanois on their Apollo: Atmospheres and Soundtracks album, as well as Vangelis on the original Blade Runner soundtrack. What’s interesting about both of these examples is that the initial soundsource is often relatively simple – a DX7 patch in Eno’s case, or a Fender Rhodes in the Vangelis example – with a big part of its interest coming from the application of effects like reverb, delay and pitch shifting. This combination of treatments is also enshrined in Strymon’s Big Sky effects pedal that features a pitch-shifted reverb called ‘Shimmer’.

Our starting point, therefore, is a simple instance of the Vintage Electric Piano patch, which works well given its pure, organic sound. The interest in the patch comes from the application of effects, with two unique points to note. Firstly, the effects are all initially applied pre-fader so that the level of the instrument source is completely independent to the levels of reverb, delay and pitch shift returned into the mix. The main benefit here is that we can use a disproportionate amount of effects in the mix, so that the sound is perceived as being almost 100% wet. Indeed, we can even turn the instrument fader completely down and have an output solely based on the effects.

The second interesting facet of the use of effects is the use of a feedback path between them, so effects feedback between themselves. The result is a dynamic amalgamation of all three effects; the delays bounce between one another, for example, rather than use an internal feedback option or, in the case of the Pitch Shifter, the entirety of the output is fed back into the Reverb before that too is sent back into the Pitch Shifter. This mimics the creative use of effects using a console, where the desk becomes an integral part of the feedback routing between the effects.

The feedback routing is created by bus sends on the individual aux return channels, and also by some effects (in this case, the Pitch Shifter) having its output routed directly to the reverb. Something as simple as a ping-pong delay, therefore, can be created by the output of a delay of the left channel being sent to a delay on the right channel, which in turn feeds back its signal to the original delay line. The regeneration of the delay, therefore, is defined by the relative send levels, so that high send levels result in a longer amount of regeneration.

Although the sound is principally built from effects, the opportunity to use some careful instrument layering options shouldn’t be missed. As we saw back in MT 191, Alchemy is a great source of pad sounds, and in this case, particularly useful for ‘glitchy’ or ‘noisy’ soundscapes. This forms a useful contrast to the relatively bell-like purity of the Fender Rhodes and adds a sense of texture to the effect. The use of a summing Track Stack means that both instruments can be played at the same time (assuming you’re rested at folder level) and you also have the option of directing the layer through a different combination of effects (in this case, without delay).

One final important component to mention, of course, is the ChromaVerb plug-in, which uses Reverb as the body of the pad sound. ChromaVerb has two key points worth picking up on. Firstly, the reverb tail extends comfortably to 30 seconds or so without becoming too grainy or ringy in its later stages. Secondly, the reverb modulation (which adds a subtle chorusing effect to the reverb tail) gives the sound a warmth that’s reminiscent of the Lexicon 224 reverb unit used by both Eno and Vangelis. The addition of the Pitch Shifter helps lift the reverb above the original input, providing an angelic-like shimmer to the effect.

Given the key routing configuration explored here, you can explore the ‘shimmer’ effect on a range of different sound sources – like some simplified ES2 pad sounds (stacked sine waves work well here), or even real instruments like a guitar. The walkthrough also explores ChromaVerb’s unique Freeze control, which can be used alongside automation and the Bounce feature to create near-infinite swathes of reverb. It all demonstrates that instrument-based sound design doesn’t just begin and end with virtual instruments, but can encompass a wealth of features in Logic Pro X. 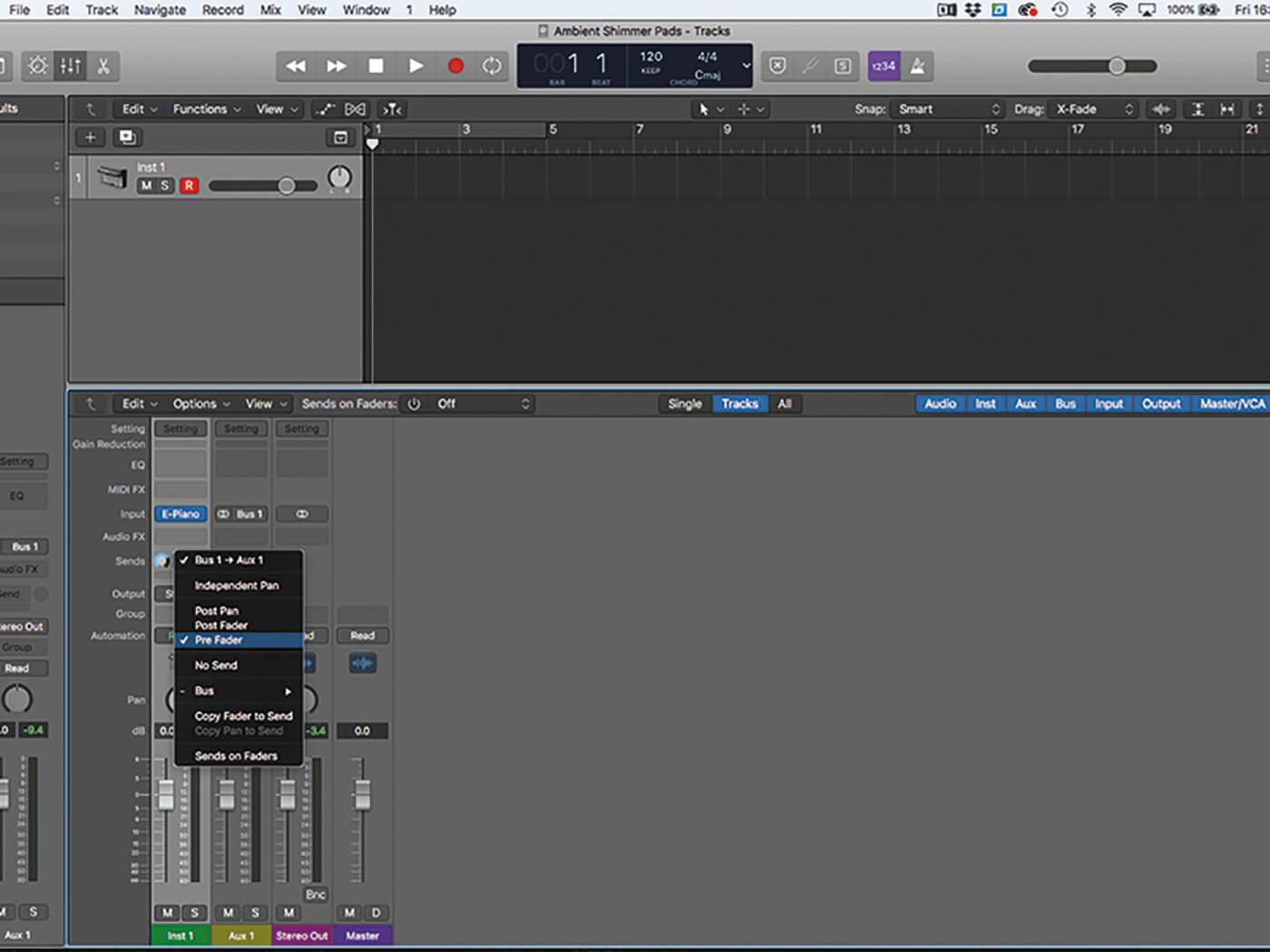 1. We start with a basic Vintage Electric Piano patch on Instrument 1. Create a bus send to Bus 1 and then click on the Send Slot to change the assignment from Post Pan (the default) to Pre Fader.

2. Create a mono instance of Tape Delay on the newly created aux channel. Select the 1\4 Note Flutter setting from the presets and adjust the Feedback to 0%, alongside an output that is 0% Dry and 100% Wet. 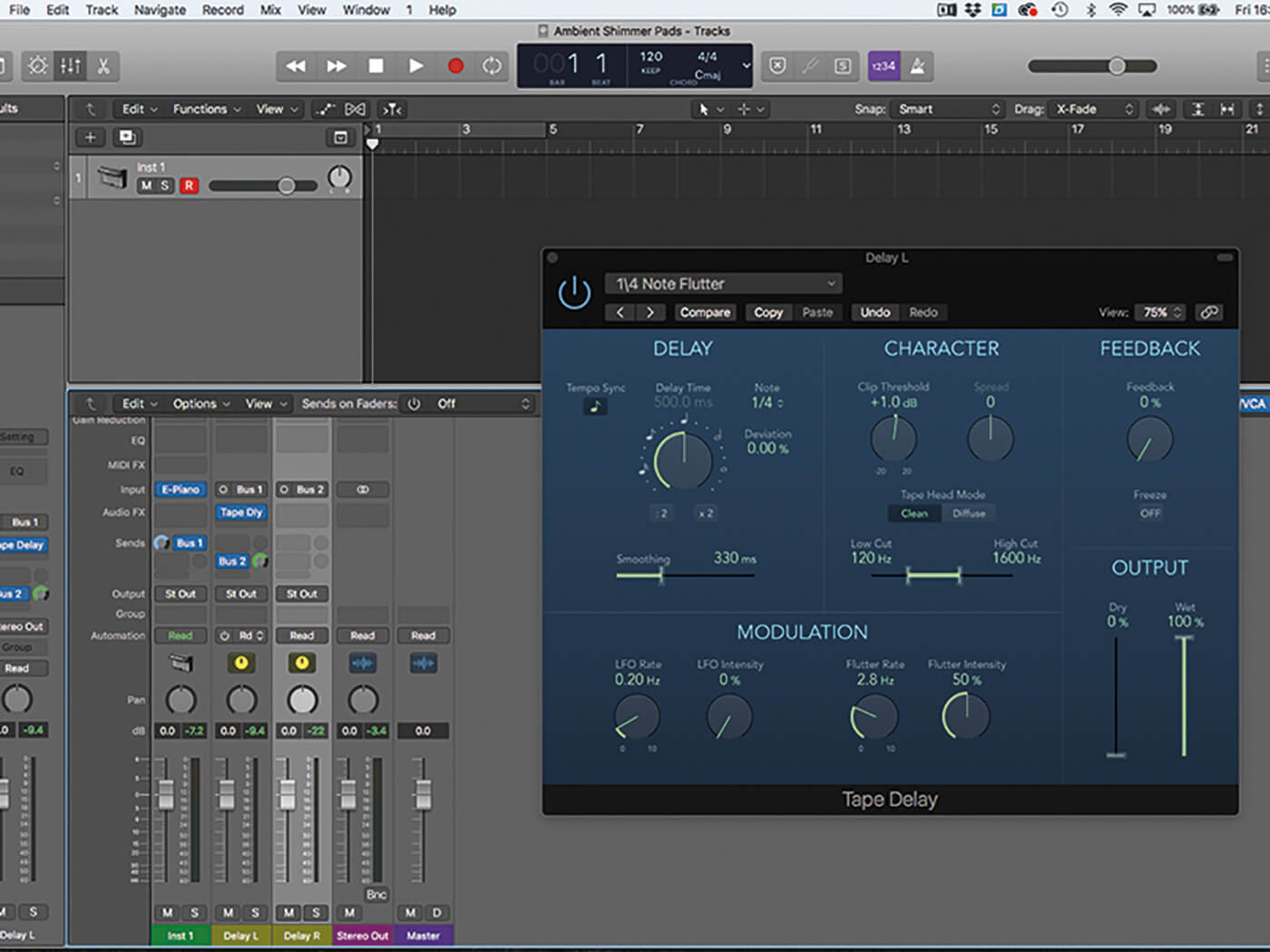 3. The application of Flutter, via the Modulation section, creates a degree of pitch-drift. Create a new bus send from the aux channel on Bus 2. Insert another instance of Tape Delay on the newly created aux. 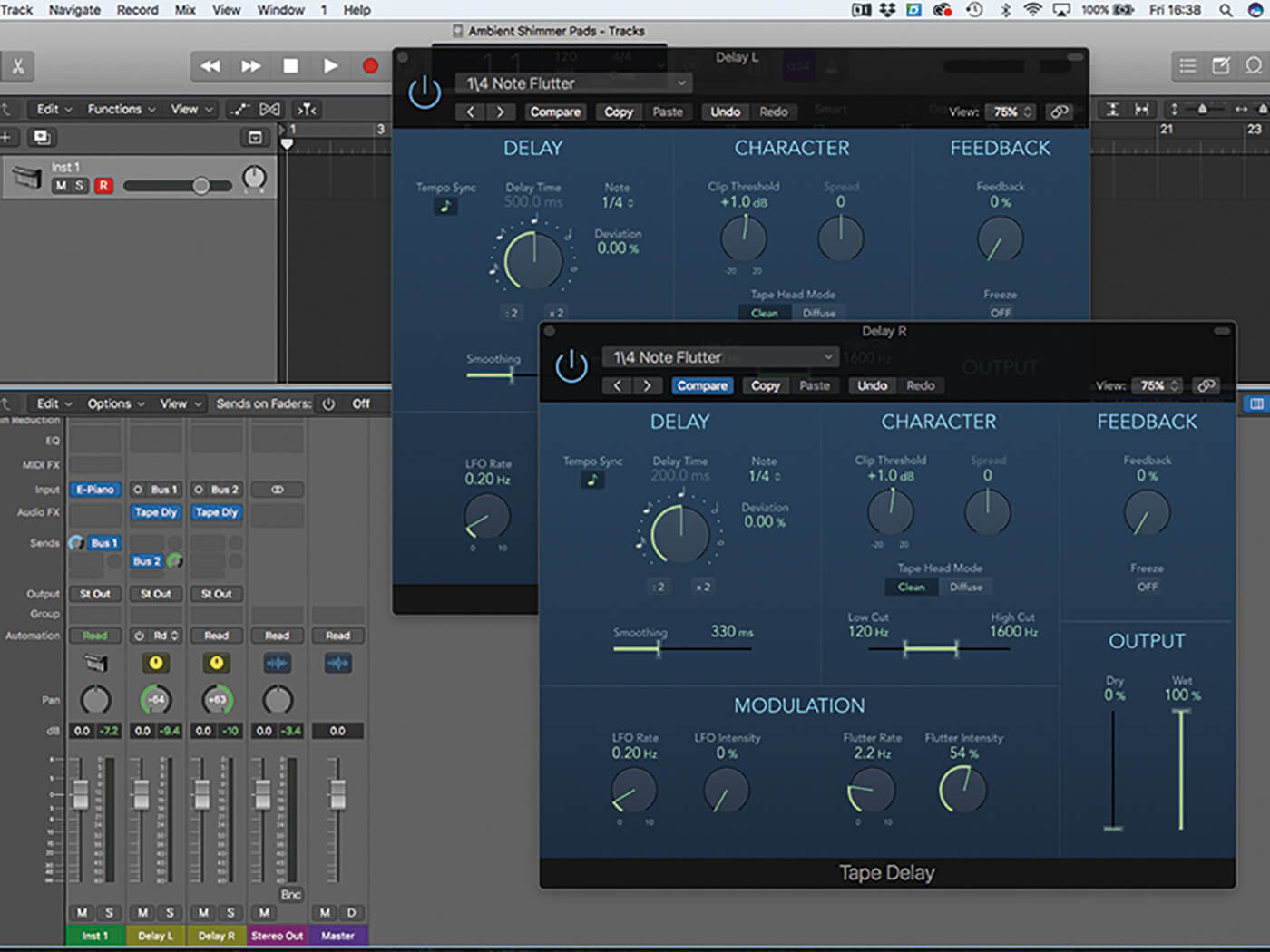 4. Cut and Paste the original delay setting over to the next plug-in, but this time adjust the Flutter Rate and Flutter Intensity so that the pitch modulation differs. Pan the delays hard left and right respectively. 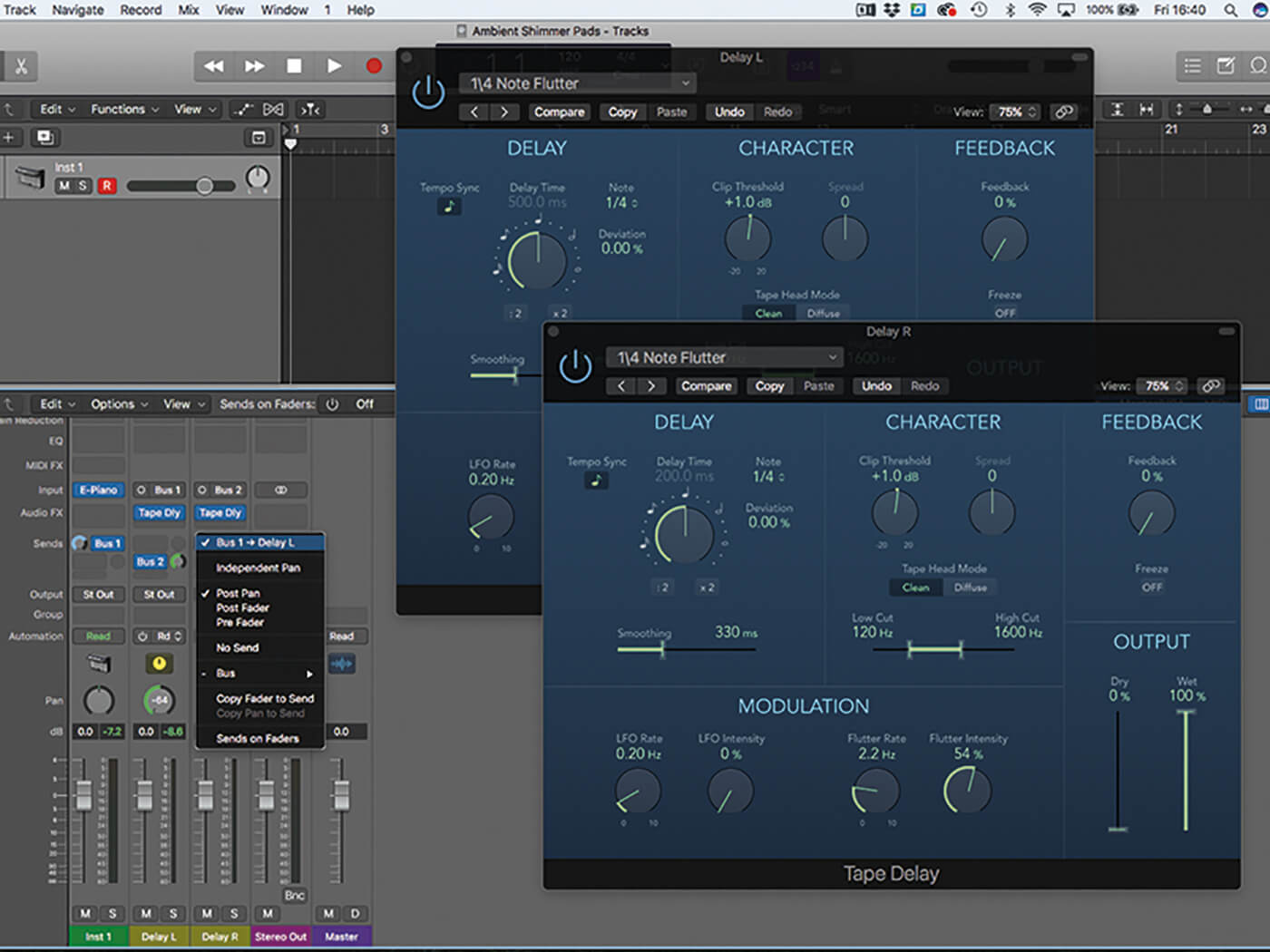 5. Create a bus send from Aux Channel 2, this time feeding back to the original delay. The level of send is proportionate to the length of the regen tail – set both below 0dB to avoid self-oscillation! 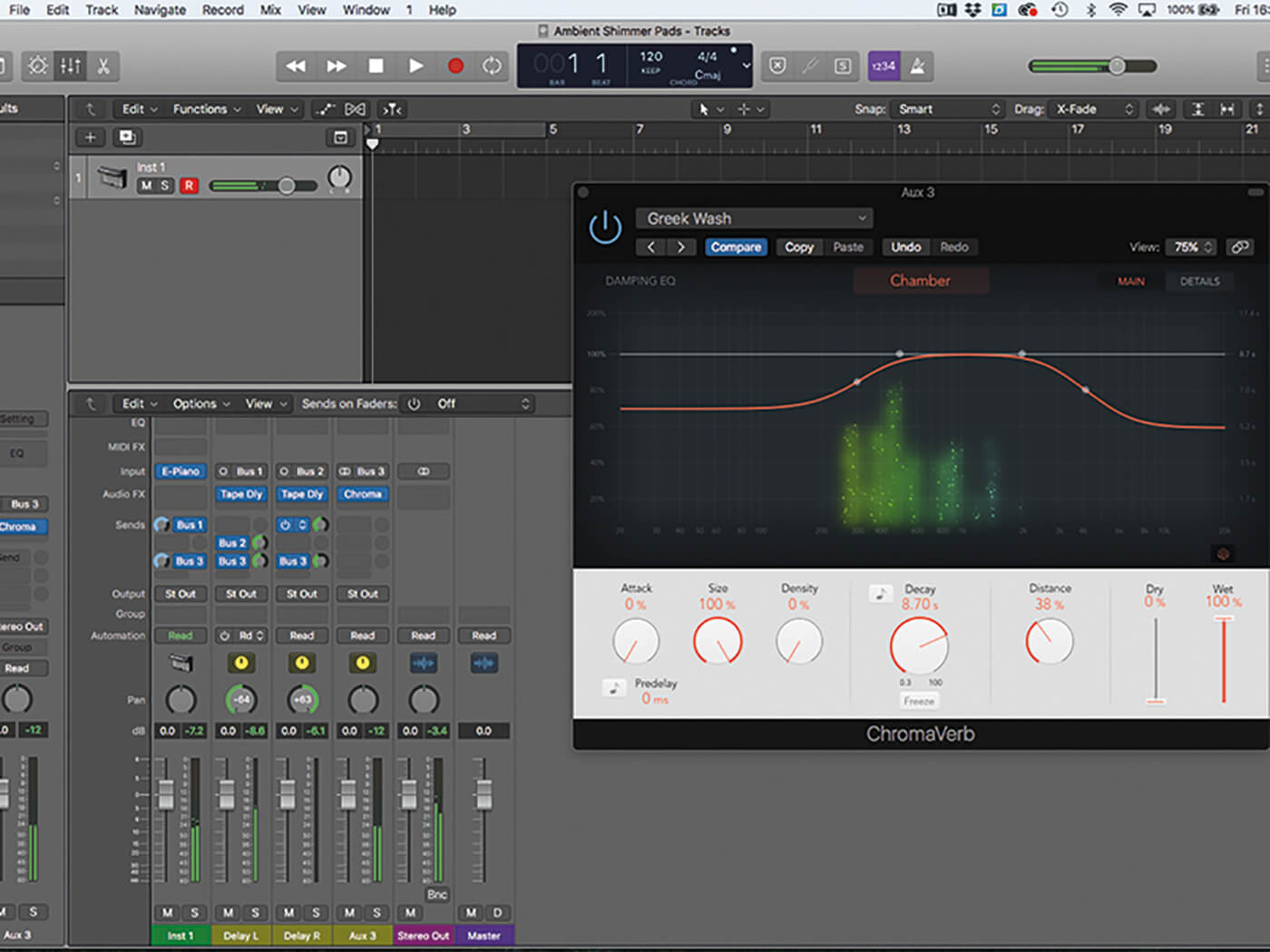 6. Create a new send from all the channels – the Fender Rhodes and two Delay channels – through to an instance of ChromaVerb set to the Greek Wash preset. Ensure the Rhodes is set to Pre-Fade send mode. 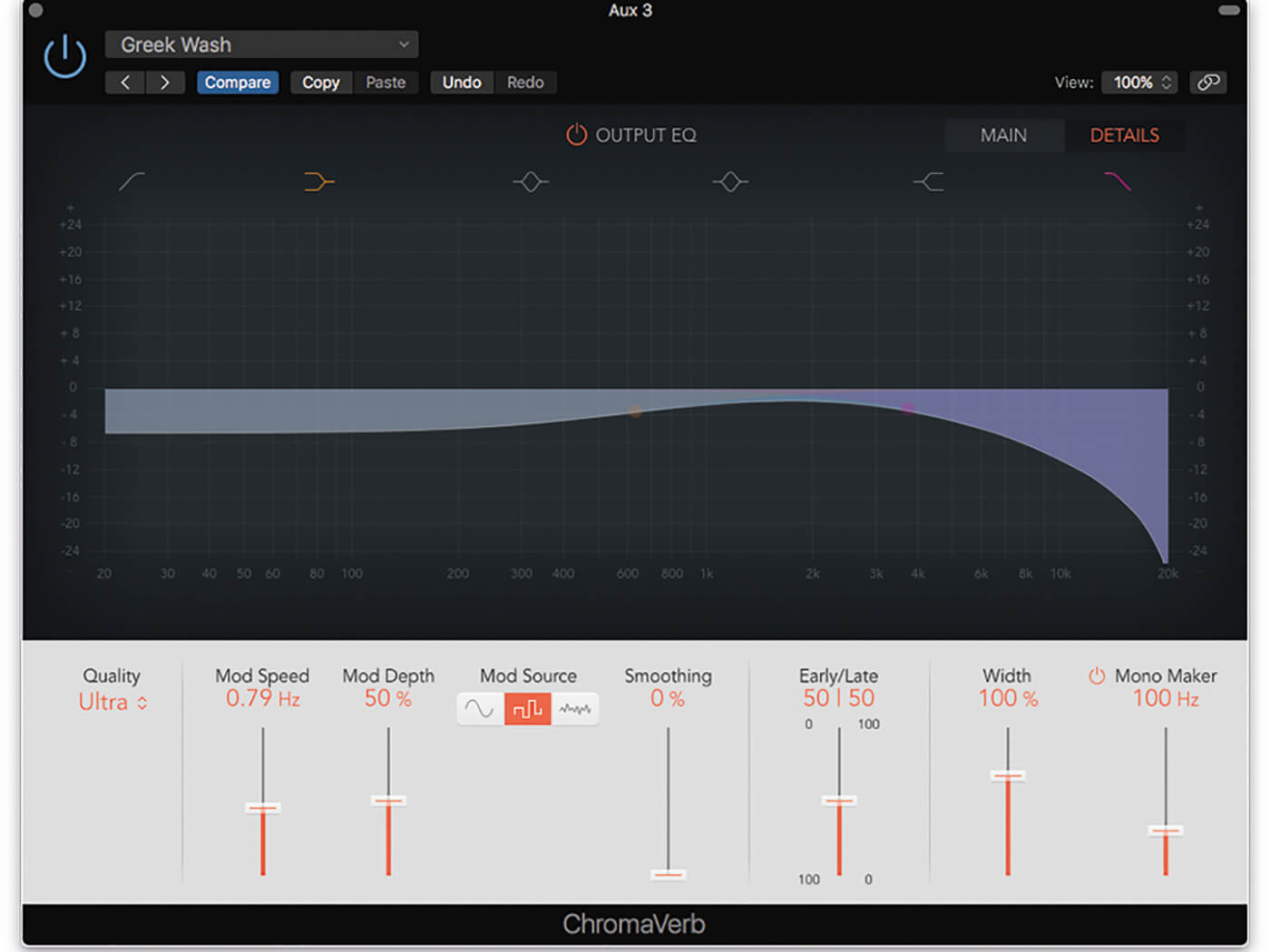 7. Change the Decay of the Reverb so that it’s 30 seconds long, which should create a ‘wash’ of reverb. Move to the Details page and ensure the Width setting is set to 100% for widest soundstage.

8. Now let’s add another layer to the source sound, this time using an instance of Alchemy. Explore the Soundscapes presets, especially with respect to Glitchy sounds. In this case, we’ve used Antarctic Sun. 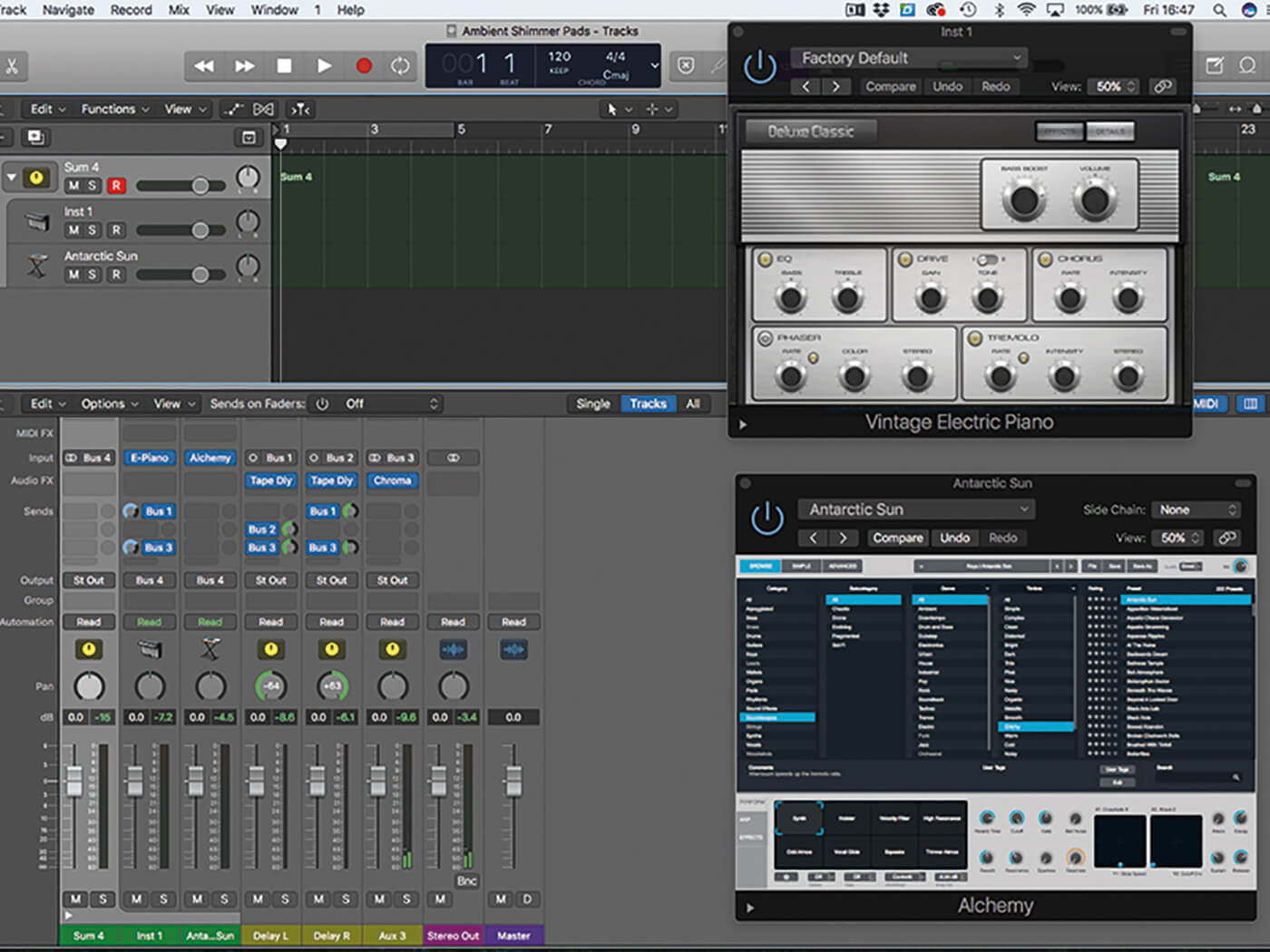 9. So that you can trigger both instruments at once, create a New Track Stack, selecting the Summing option. As long as you’re rested on the top level, MIDI data will be routed to both instruments simultaneously.

ROOM TYPES Given the prominence of reverb in this treatment it’s well worth exploring the different Room Types in ChromaVerb, as these help define the basic colour, size and density of the reverb. Worthy mentions include Synth Hall; for its super-wide sound, and Bloomy; which has a rich and dense sound that suits this type of application. 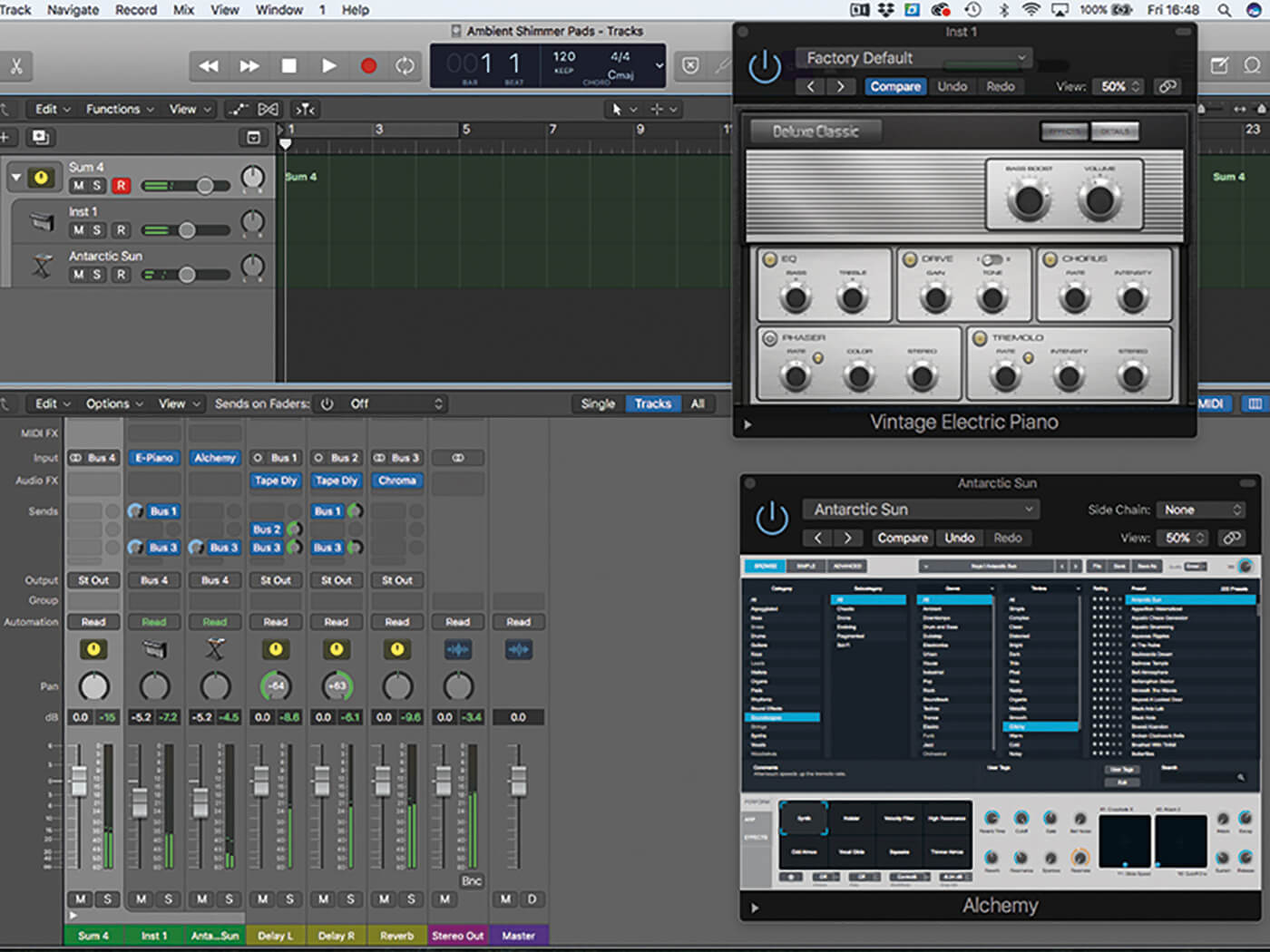 10. Create a Pre Fade bus send from Alchemy to the reverb. You can attenuate the two instrument faders, leaving a reverb and delay-heavy mix that would be far more difficult to create using Post Fade sends. 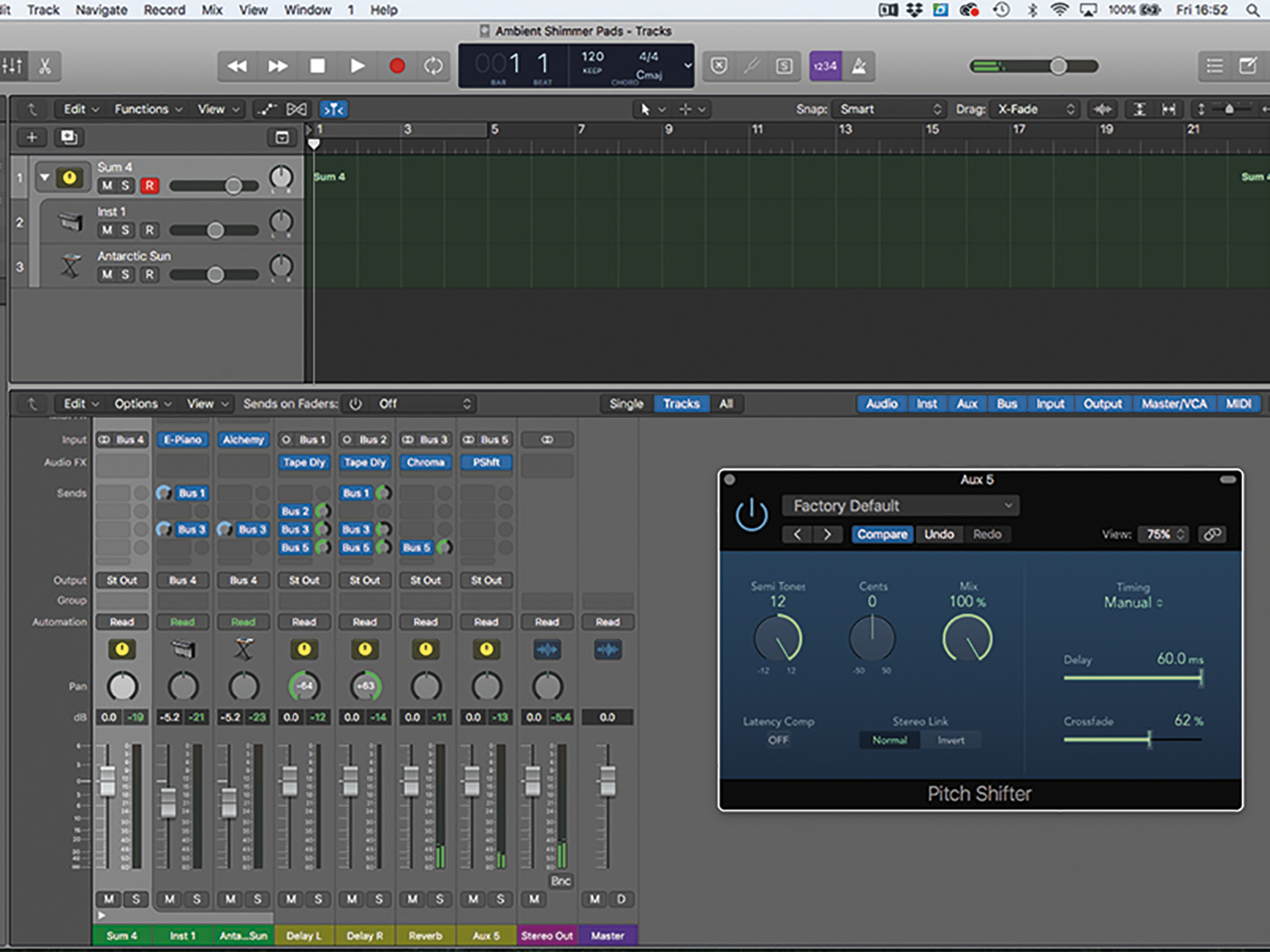 11. Create a bus send from all three effects – the two delays and the instance of ChromaVerb – which is fed to a new aux channel. Create an instance of the Pitch Shifter plug-in on this aux channel. 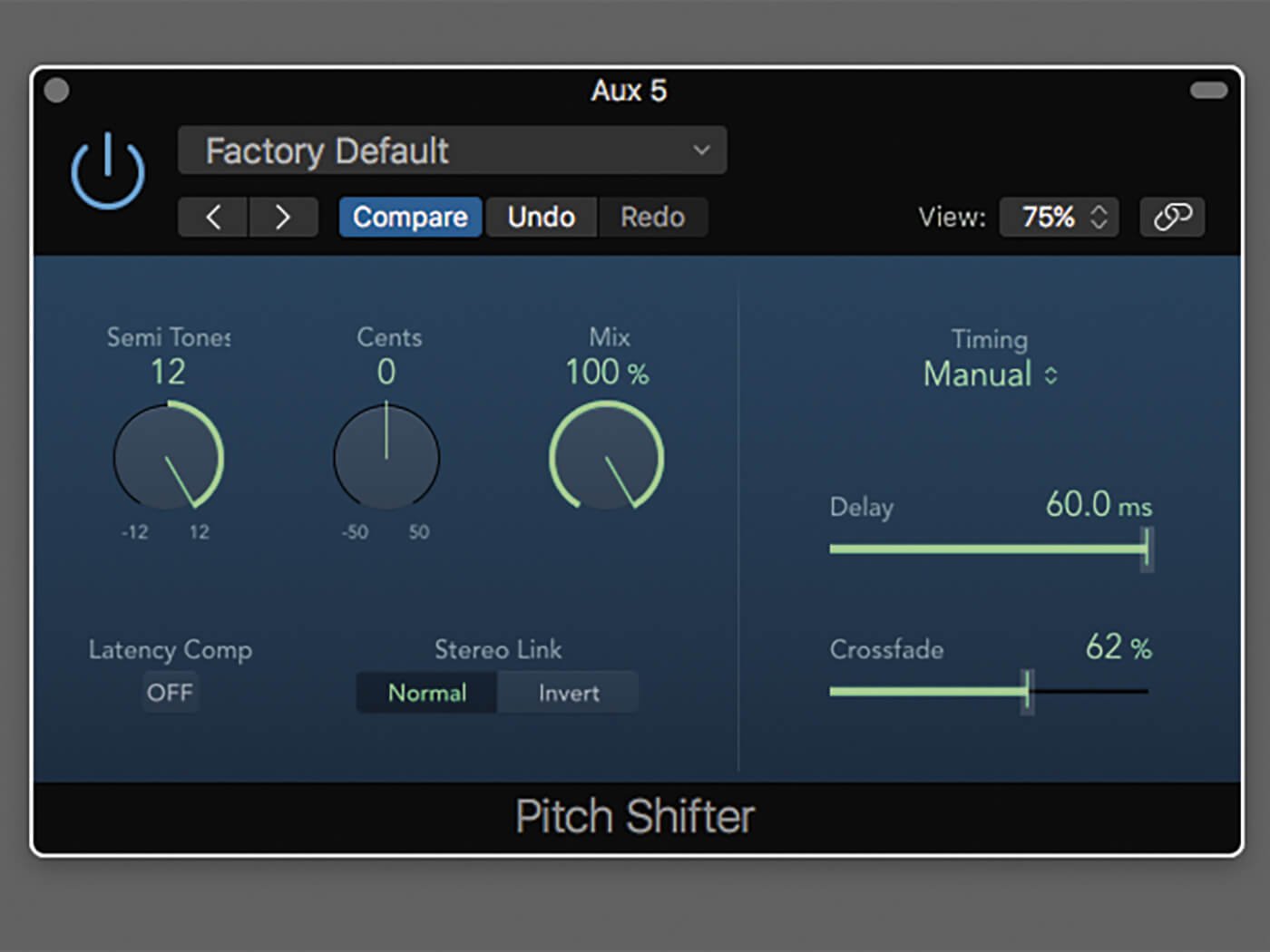 12. Raise the Pitch Shifter to +12 Semitones and set the Mix to 100%, so that the output is transposed by an octave. For the smoothest shift, set the Delay to 60ms and the Crossfade parameters to 62%. 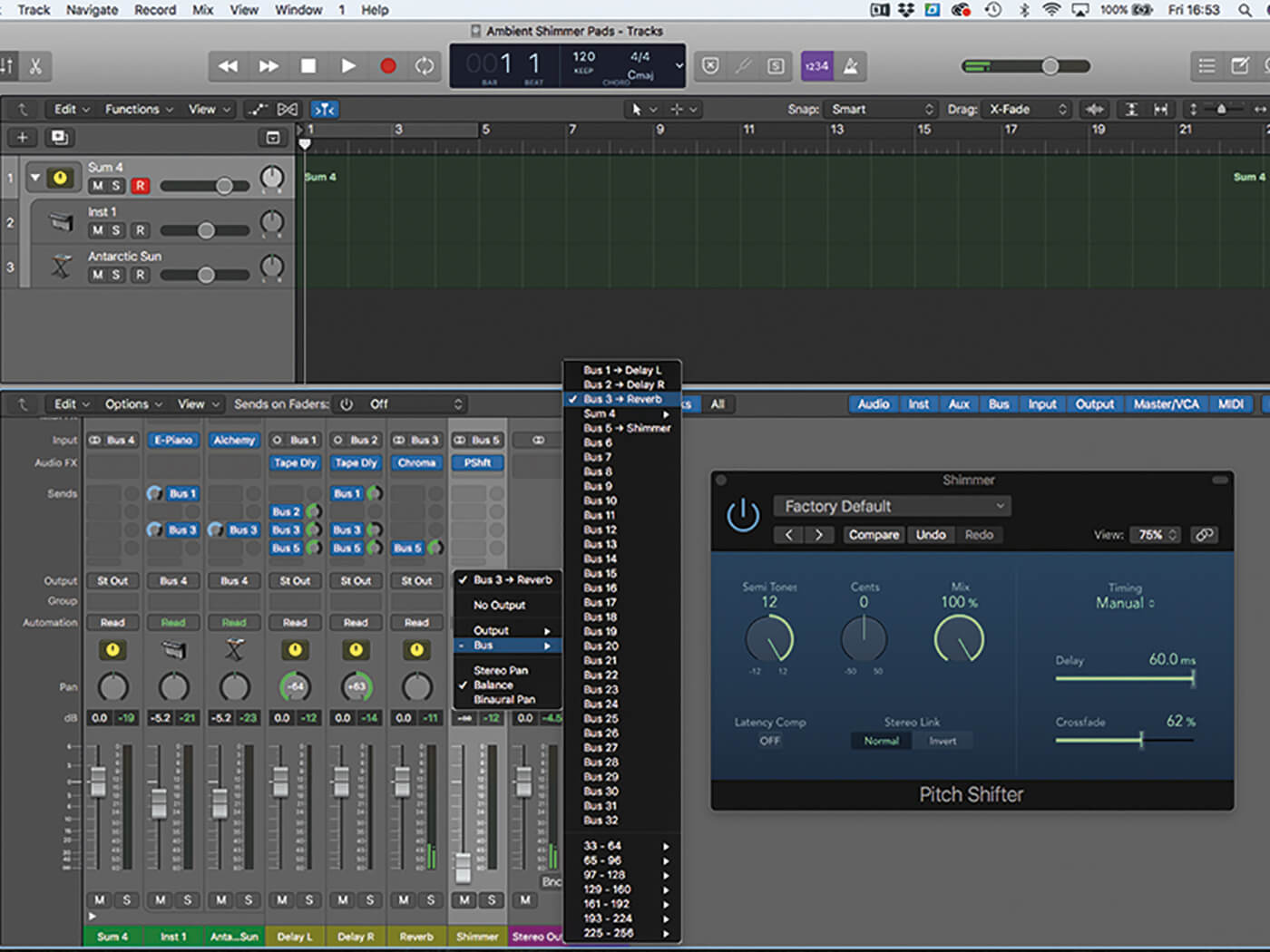 13. Lower the fader for the reverb return, and then change the output from Stereo Out to Bus 3 (which should be the input to the reverb). We’ve now created a feedback path, so be careful with the fader! 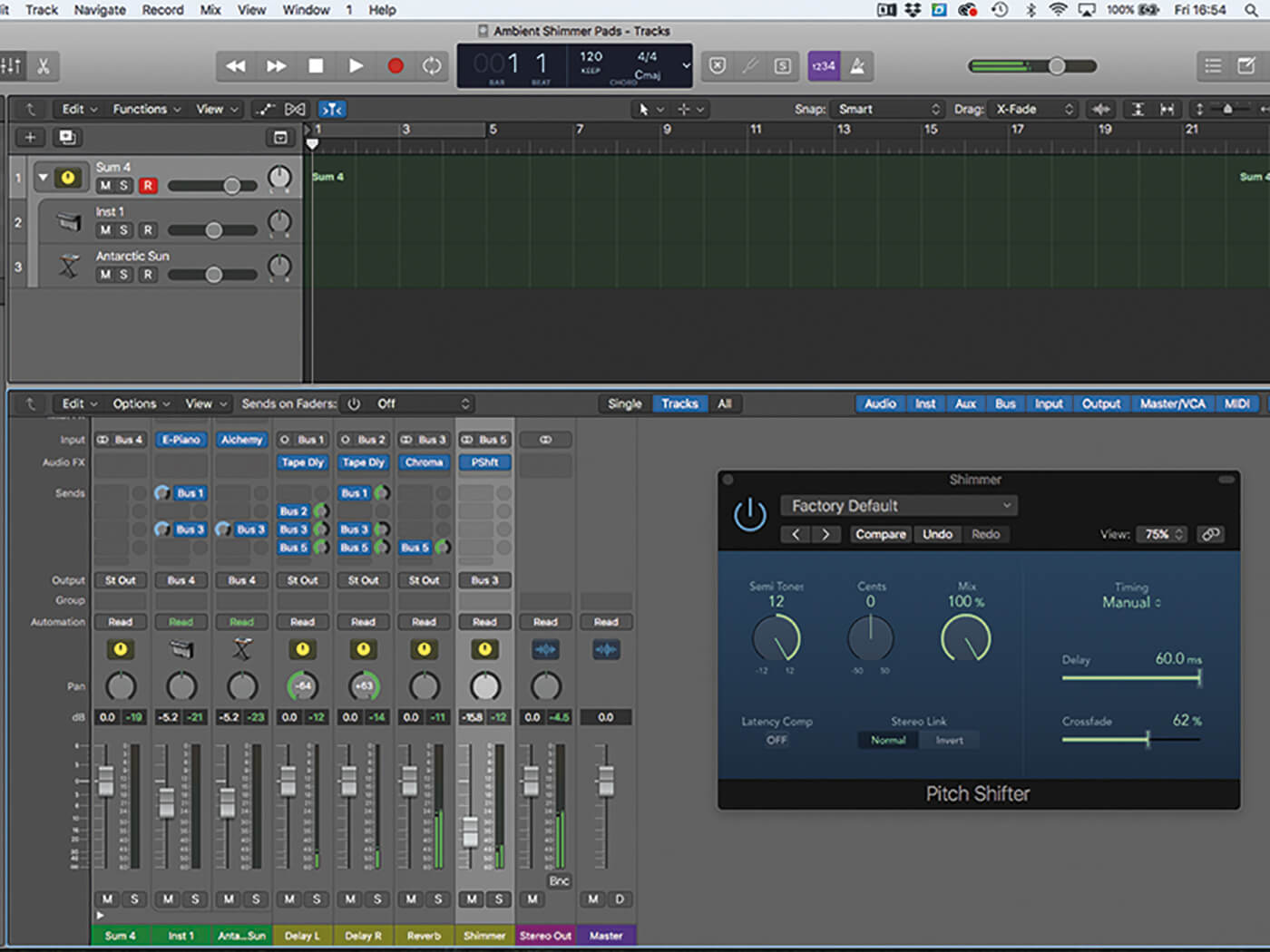 14. Raising the level of reverb effectively creates a form of octave-based pitch spiral, so that the Reverb ascends in pitch over its duration. The amount of ‘ascent’ therefore, is defined by the level of the Pitch Shifter. 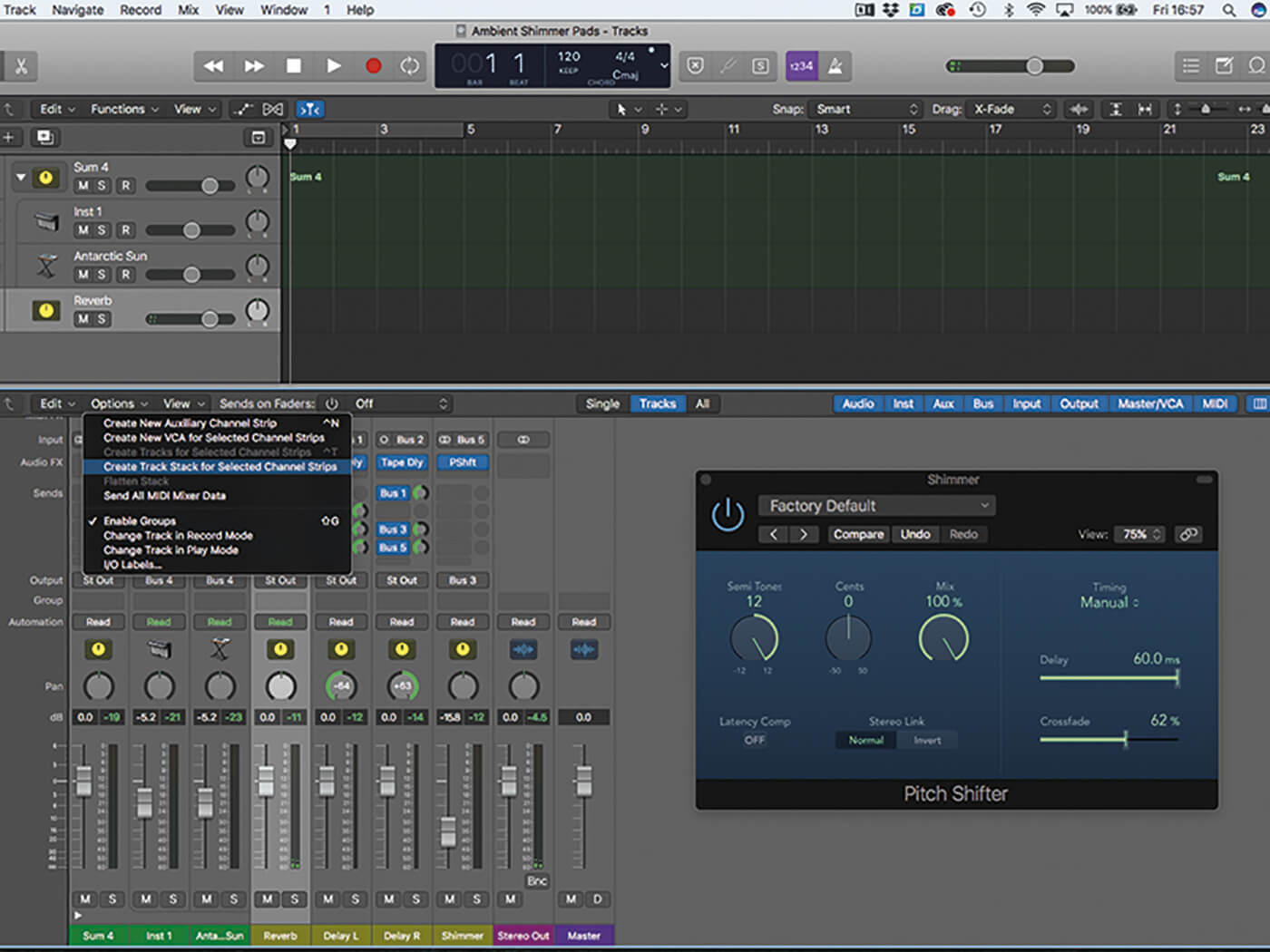 15. Let’s look at how we can use Freeze function in ChromaVerb to create ‘frozen’ ambient shimmer effects. Select the Reverb track and then pick Options > Create Track Stack for Selected Channel Strips. 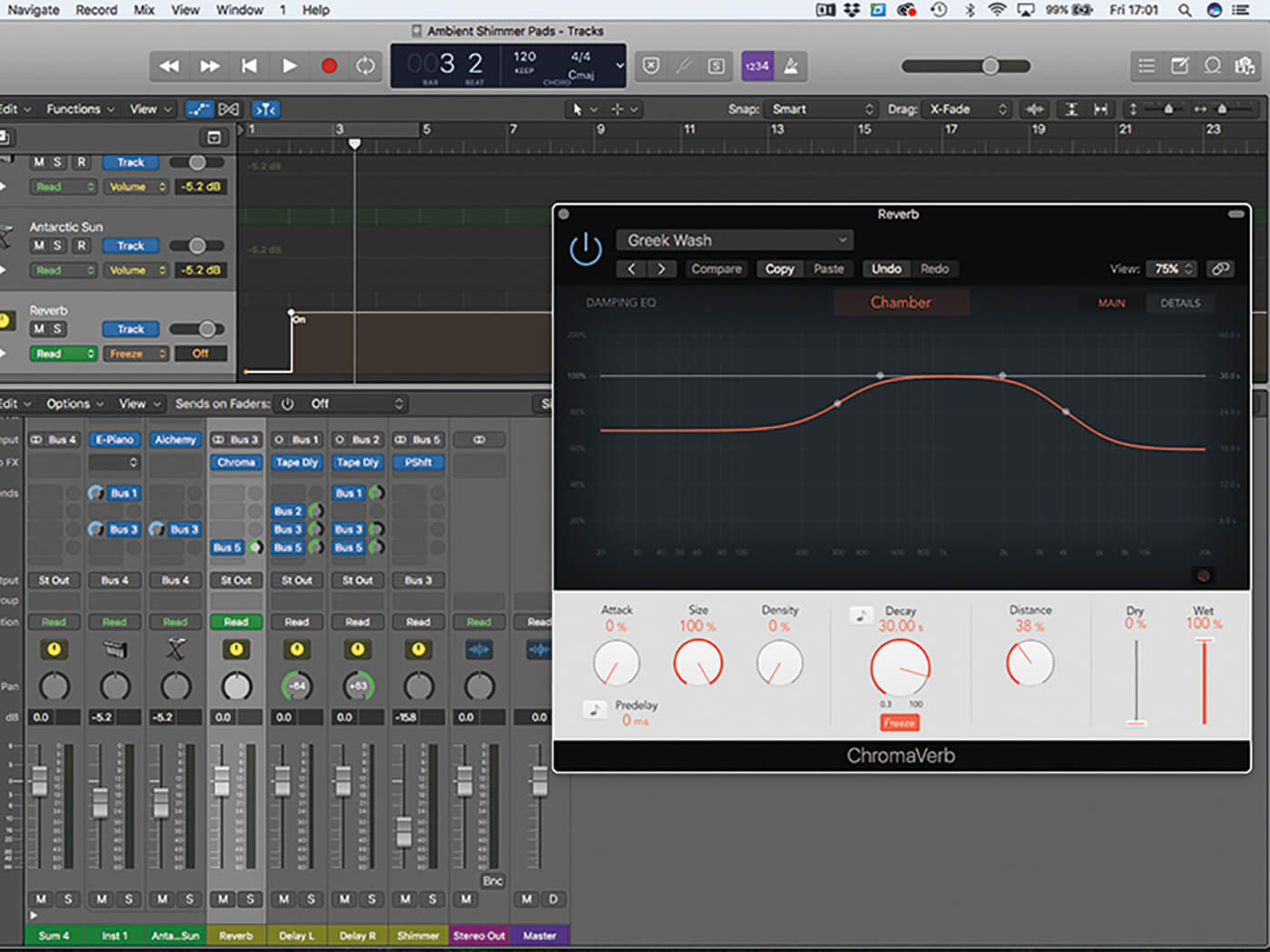 16. Activate the automation view (A) and select Freeze as the current automation track lane. Draw a new automation node so that the Freeze button on ChromaVerb is activated at the beginning of Bar 2. 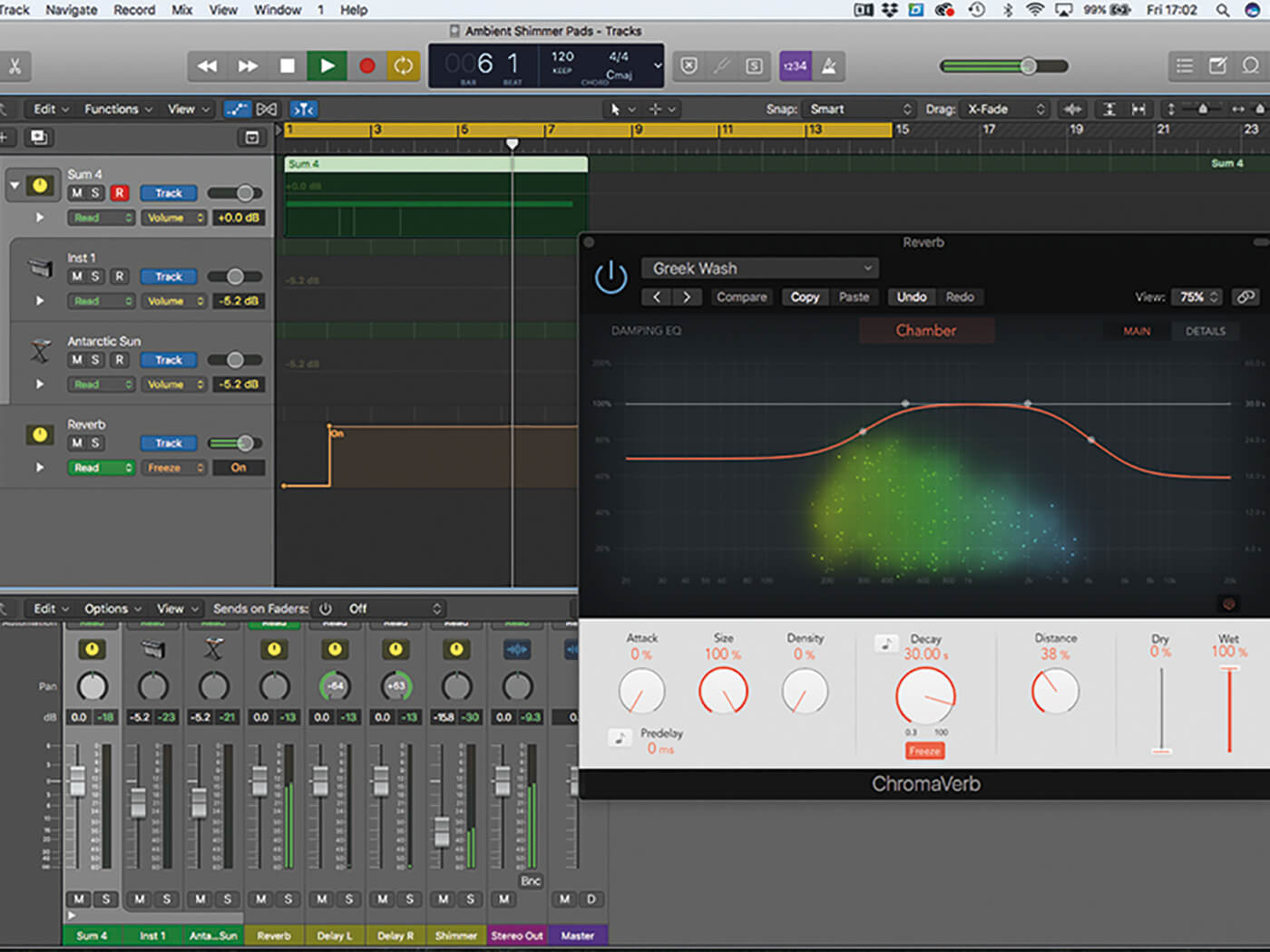 17. Record a chord, played at the beginning of Bar 1. When you play the song, Logic will Freeze the reverb creating an infinite ‘shimmering’ effect, much like the background of Kate Bush’s Running Up That Hill. 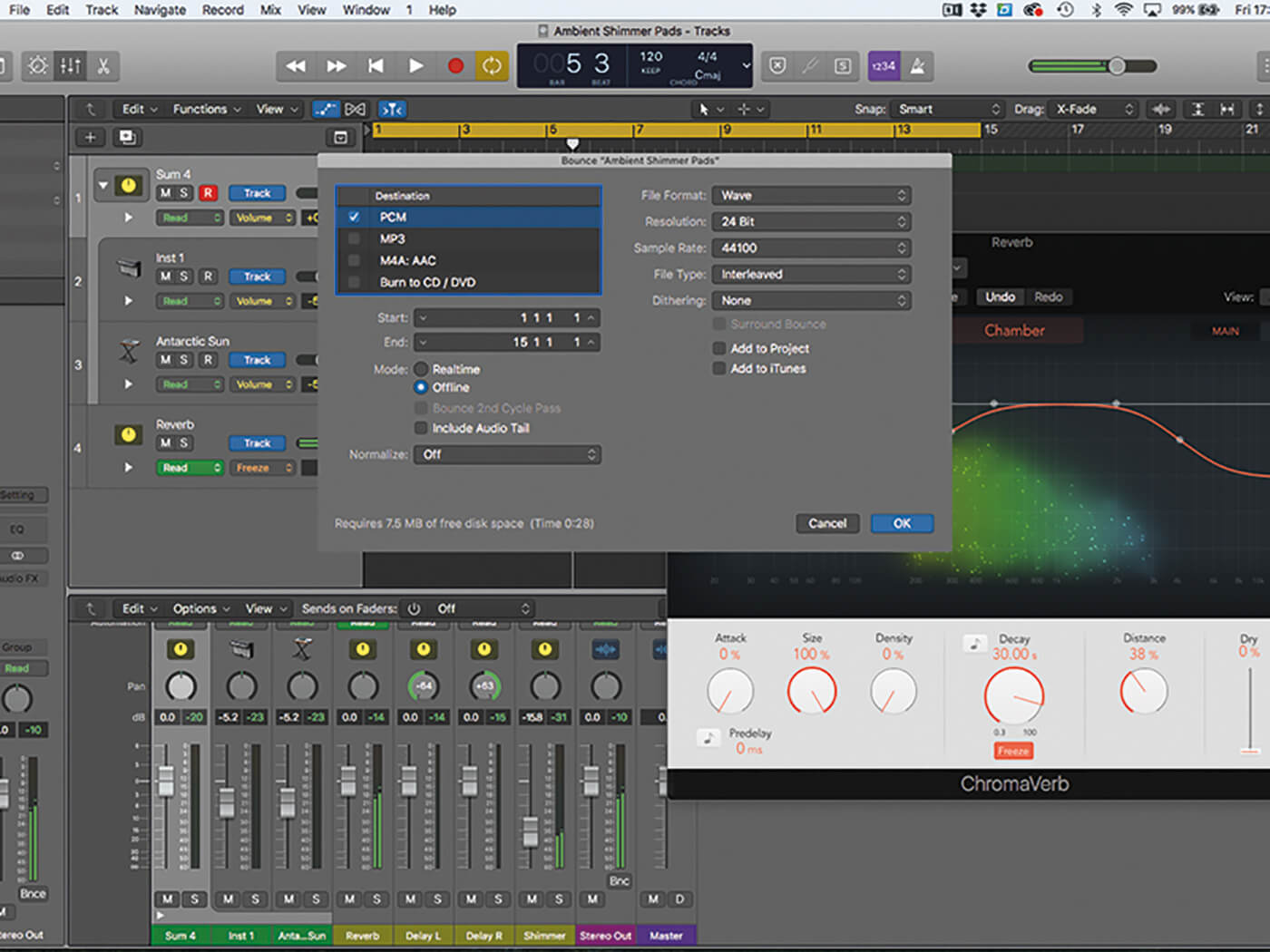 18. Use the Bounce feature to print an audio file of the resulting reverb shimmer. Use the cycle locators to set the length of the bounce. You can then re-import the shimmer into a new project and adjust accordingly.