When it’s time to take your music on the road, Boss reckons the Cube Street II has everything you need. But can it do the business? 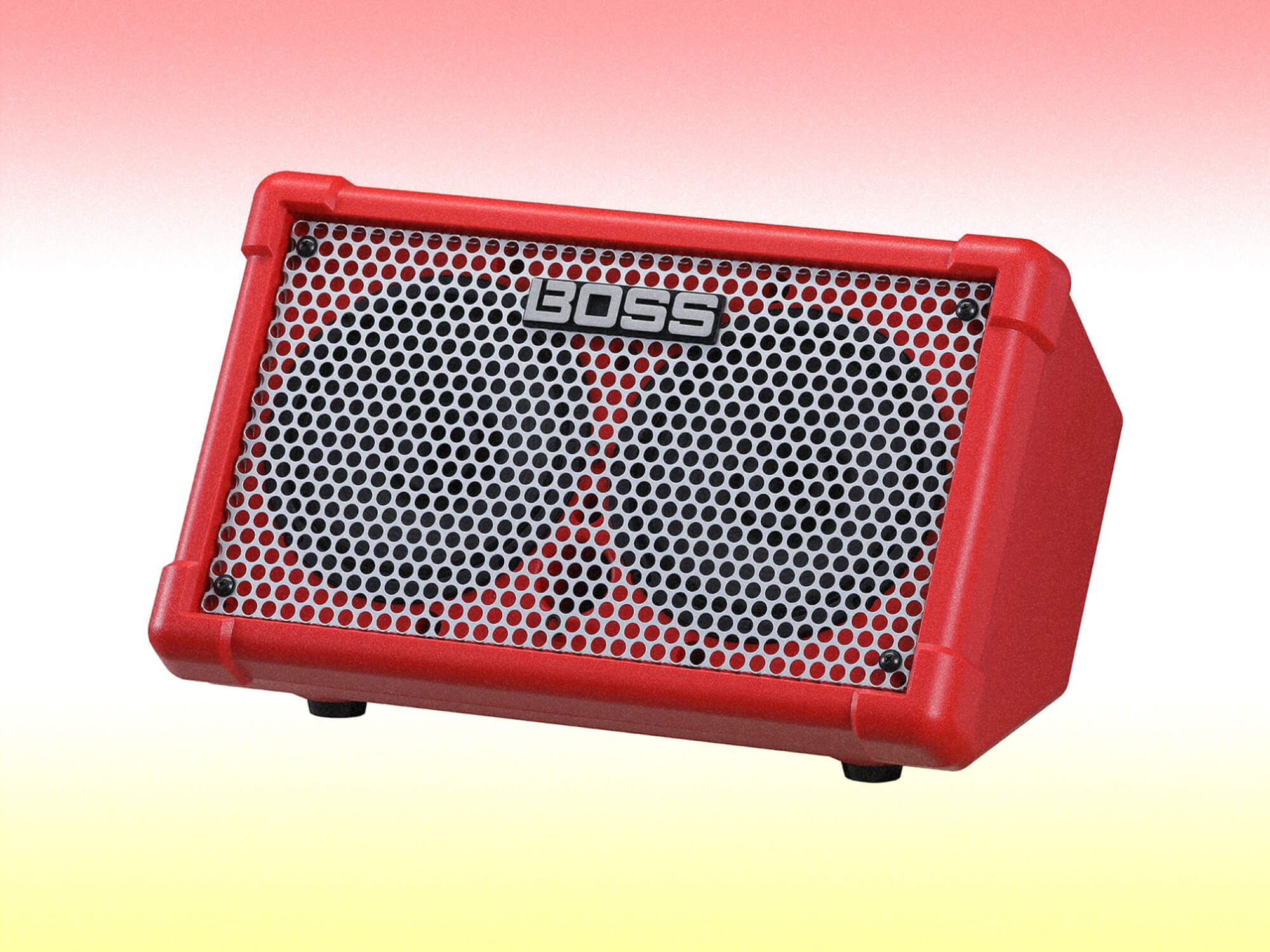 Evolved from the Roland Cube Street, this new portable amplifier is the first to bear the BOSS name. It’s easy to carry, weighing only 4.4kg, but feels sturdy enough to withstand a knock or two thanks to its injection-moulded casing. It’s designed for street performers but, as we will see, also has some high-tech features that elevate it beyond being merely an amp that you can carry anywhere.

The Cube Street II comes with a mains adapter but can also power from 8 AA batteries. Boss quotes a battery life of up to eight hours when using the full 10W of power, or a little longer if you flip on the Eco Mode switch, which throttles output down to 5W. In use, it’s surprisingly loud at full power, its two 6.5 inch speakers producing a crisp and direct middle and top end as well as a decent bass, especially if you customise the EQ settings to suit your performance. The upward-facing design helps direct sound at your audience rather than along the ground and also gives it a dual function as a wedge monitor when part of a larger PA setup. 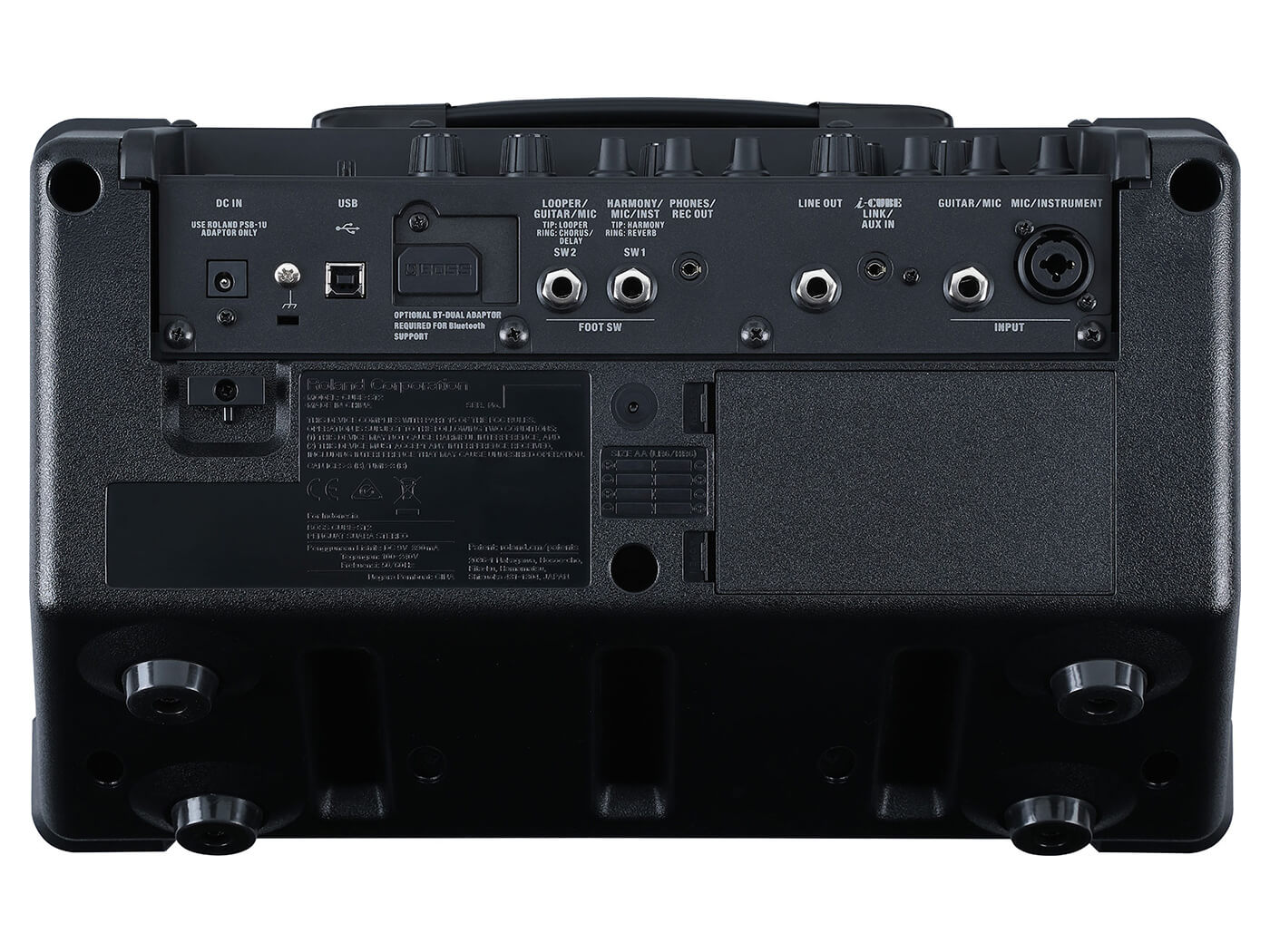 It has a decent amount of versatility for inputs. The first input has a jack socket for guitar and mic inputs, and the second has an XLR mic/instrument combo socket. Typically a performer would connect a guitar and a mic to these inputs, but it’s also possible to use the iCube Link/Aux In mini-jack on the rear panel to connect a phone or other playback device to provide a backing track. This signal gets sent in stereo to the speakers, and there’s a dedicated input level knob to control its volume.

With your mic and guitar connected, you can use the onboard effects to add some sparkle to your performance without the need for external effects pedals. The mic/instrument channel is switchable to suit the source and has a three-band EQ and reverb control. When using a mic, you can use the harmony knob to add digital harmonies to your vocals, with different settings on the dial for differently pitched harmonies – unison, high and higher. A foot switch input lets you turn harmony or reverb on or off, making them practical performance tools, not just window dressing.

The harmony effect works well in practice, adding unison voices to your singing though it prefers a vocal performed with confidence to function optimally. This type of feature isn’t something you’d necessarily expect to find on such a portable unit, and it will be convenient for solo performers in search of a bigger sound.

The guitar/mic channel also has all the basics you’d want: a three-band EQ, gain and volume controls, plus chorus/delay and reverb stages, and even an integrated guitar tuner. There’s virtual amp modelling built-in with nine amp types available split across acoustic and electric guitar, instrument, mic or clean categories to add even more depth to your guitar sound. Boss has clearly thought about the most important tools a street performer – particularly a guitarist – would need, and included them here.

What you see is what you get with the Street Cube II. It’s simple to select any of these parameters quickly, and they sound great. The wide acoustic guitar effect, in particular, brings extra life to strummed parts, and the Crunch and Lead settings add a satisfying weight to electric guitars. The amp effects are perhaps a little generic compared to using a bunch of your own pedals but they provide a decent bedrock of tones – crunch, lead and so on – and everything is kept inside the box for a minimum of fuss. You’re also free to add your own favourite pedals too of course, should you wish.

Another digital extra is the onboard looper which offers up to 45 seconds of stereo sampling time. There are record, overdub, play and stop indicators on the top panel, but you need an optional foot switch to use it for a performance. With that switch in place, the looper is easy to use, even if the technical skill involved in overdubbing yourself in real time requires practice. Even with the extra cost of a dual footswitch to operate the looper (the Boss FS-6 is $70/£60), it’s still less expensive than a dedicated looper pedal which cost upwards of $/£100.

There are a couple of other ways to get sound into and out of the amp. On the rear panel, a USB-B port allows connection to your Mac or PC without the need for drivers. The Cube will appear as an audio interface to your DAW or other software. A typical use for this would be to record a performance directly to your DAW or to play a backing track from the computer through the amp. A headphone mini-jack output also allows analogue recording of the signal from the amp.

If you’re looking to cut down on the cabling, Boss makes the optional BT-Dual Bluetooth audio and MIDI adapter for $49, which connects to the rear panel of the Cube Street II. Once installed, it lets you stream audio wirelessly from a smartphone, tablet or laptop. This would likely be the preferred option for many people since it’s more convenient than wiring, though it’s a shame that Bluetooth isn’t built into the amp itself. 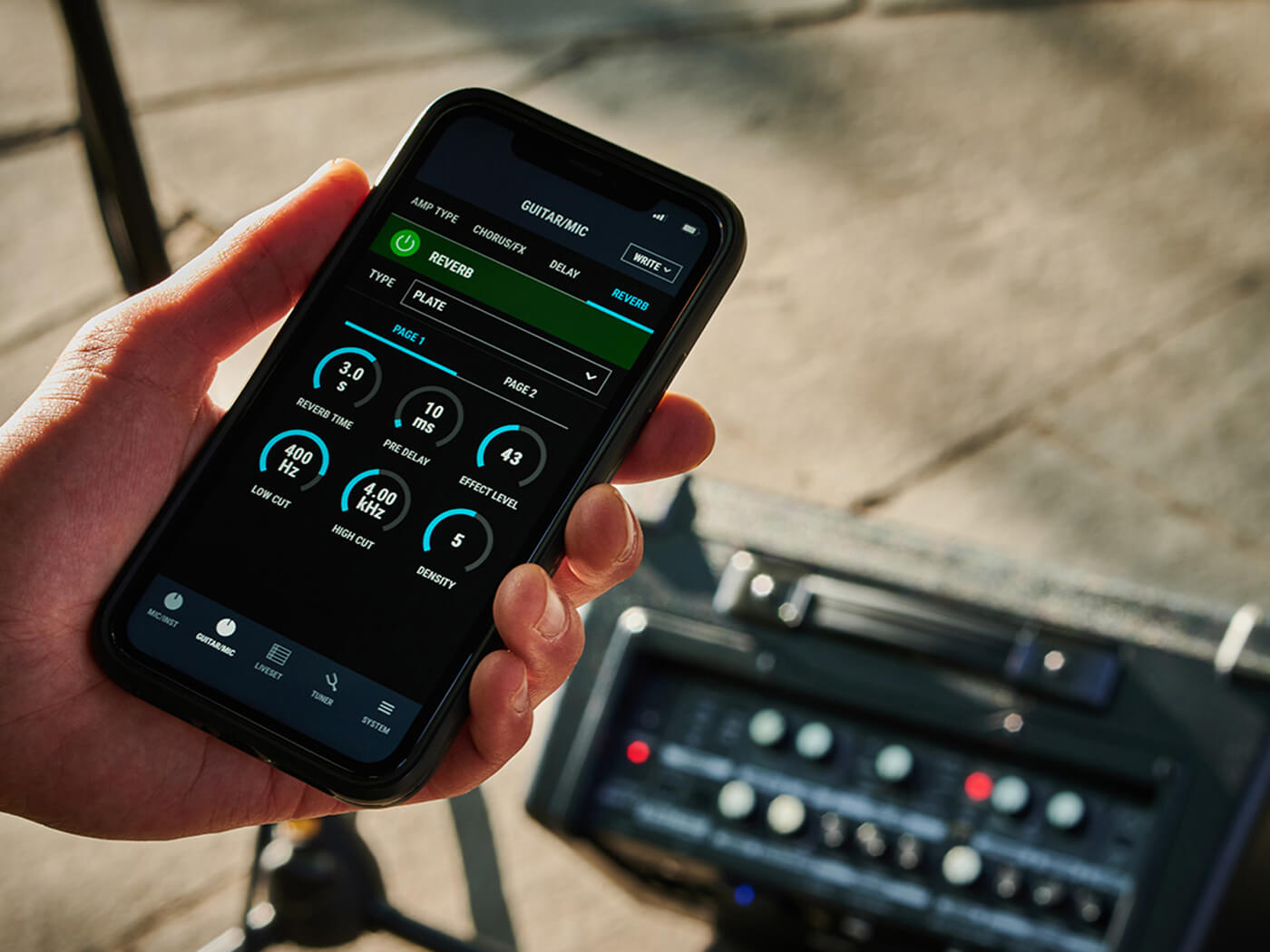 The Bluetooth adapter unlocks the ability to use the free Cube Editor app for iOS, which provides more comprehensive, digital control of the onboard effects from your phone. There’s also the Cube Jam app, which is a basic, guitar-focused looping app for your phone. The review model was supplied with the Bluetooth adapter, and its setup and use are very straightforward. Currently, the app is only compatible with this amp though Boss plans to release more products that will work with it.

The Cube Street II is a great portable amp for live performers that can accommodate guitarist/singer types and players of keyboards or other instruments that can be mic’ed up or otherwise connected. Packing a lot of technology into its small frame, it has good battery life and plenty of volume as well as a decent selection of effects and extras like the harmoniser and looper. It’s a bit of a shame that Bluetooth doesn’t come as standard, but there are wired input options to compensate. All things considered, this amp will suit most street performers down to the ground.