The company’s latest “everything box” gives musicians and producers tools to cover virtually all facets of music production, with synths, guitar modelling, sampled instruments and mixing and mastering tools. But is it worth the hefty price tag? 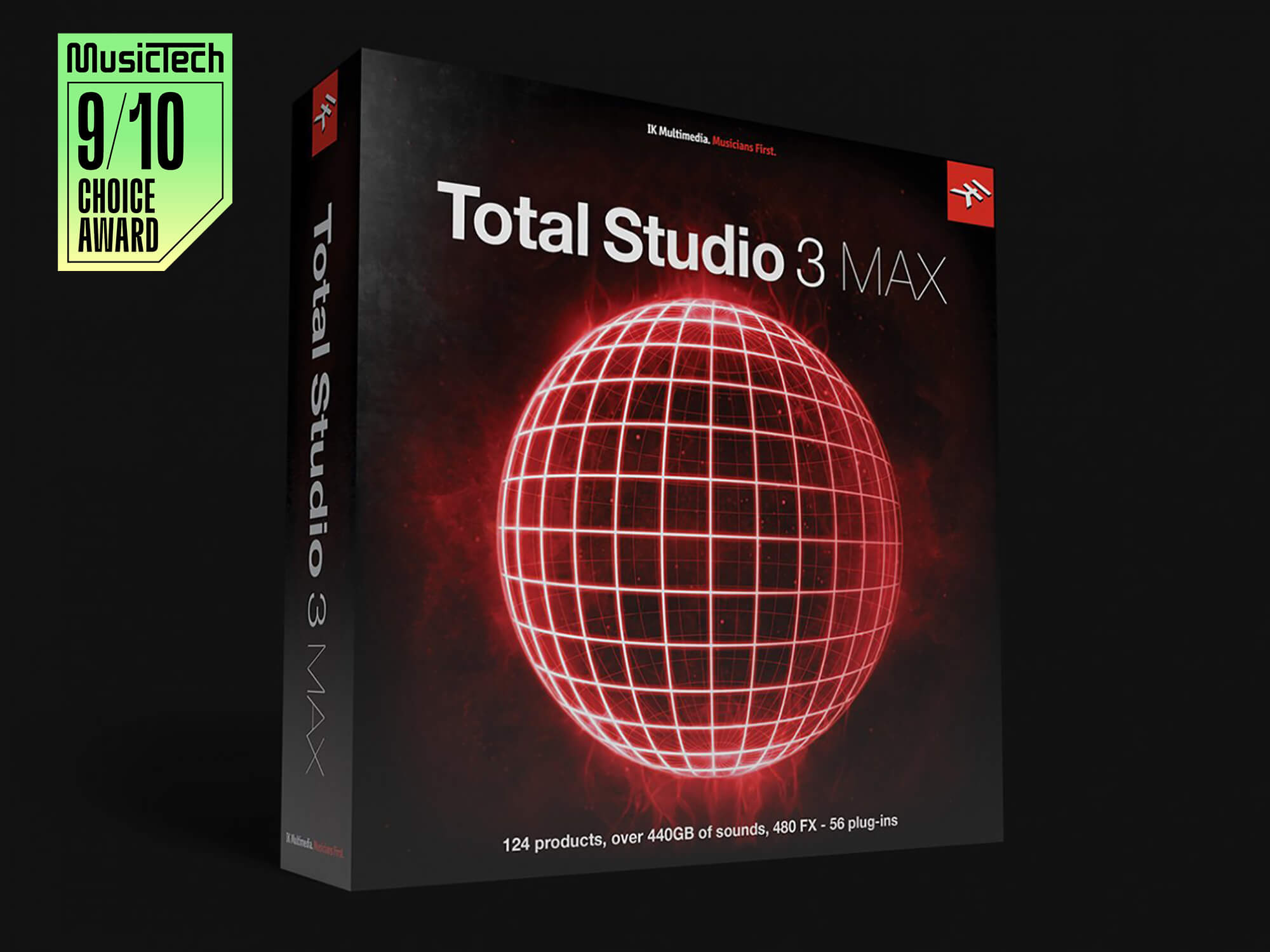 ⊕ Very easy to use
⊕ Includes ARC System 3 room correction
⊕ Strummer in SampleTank is great fun
⊕ Over 440 GB of samples (over 10,600 presets)
⊕ The librarian makes finding your sound fast and easy

Total Studio Max 3 includes so many instruments, effects and processors that it can cover your production needs from songwriting to mastering. And if you're looking for new speakers too, the iLoud MTM bundle is extraordinary value for money.

IK Multimedia’s Total Studio package bundles a huge amount of software – including virtual instruments and effects plug-ins – at a discounted rate for users who need a little of everything for their productions. Now, with Total Studio 3 Max, IK is throwing everything but the kitchen sink into the deal, making it a fierce competitor to Arturia’s Sound Explorers Collection and Native Instruments’ Komplete bundles.

Total Studio includes so many instruments, it’s difficult to know where to start. SampleTank – now at version 4 – is the instrument that began IK’s foray into virtual instruments. It includes over 8,000 sounds covering a vast range of instruments, including pianos and other chromatic instruments, guitars and basses, drums and percussion, orchestral instruments, organs, loops, sound effects, synths and more.

Finding sounds is easy, though, due to the powerful librarian that lets you search for sound in different styles, instrument groups or even moods. You can also search by keywords, making it quick to find what you’re looking for.

IK has been tweaking the engine responsible for disk-streaming, too. And it shows. With over 260GB of sounds (including 200GB of new content), you need to be able to find sounds quickly and load them fast. IK has added eight new libraries on top of the collection of 22 in the enhanced core library. Consequently, we could find loads of sounds to fit various styles from hip-hop and trap to synthwave and more. 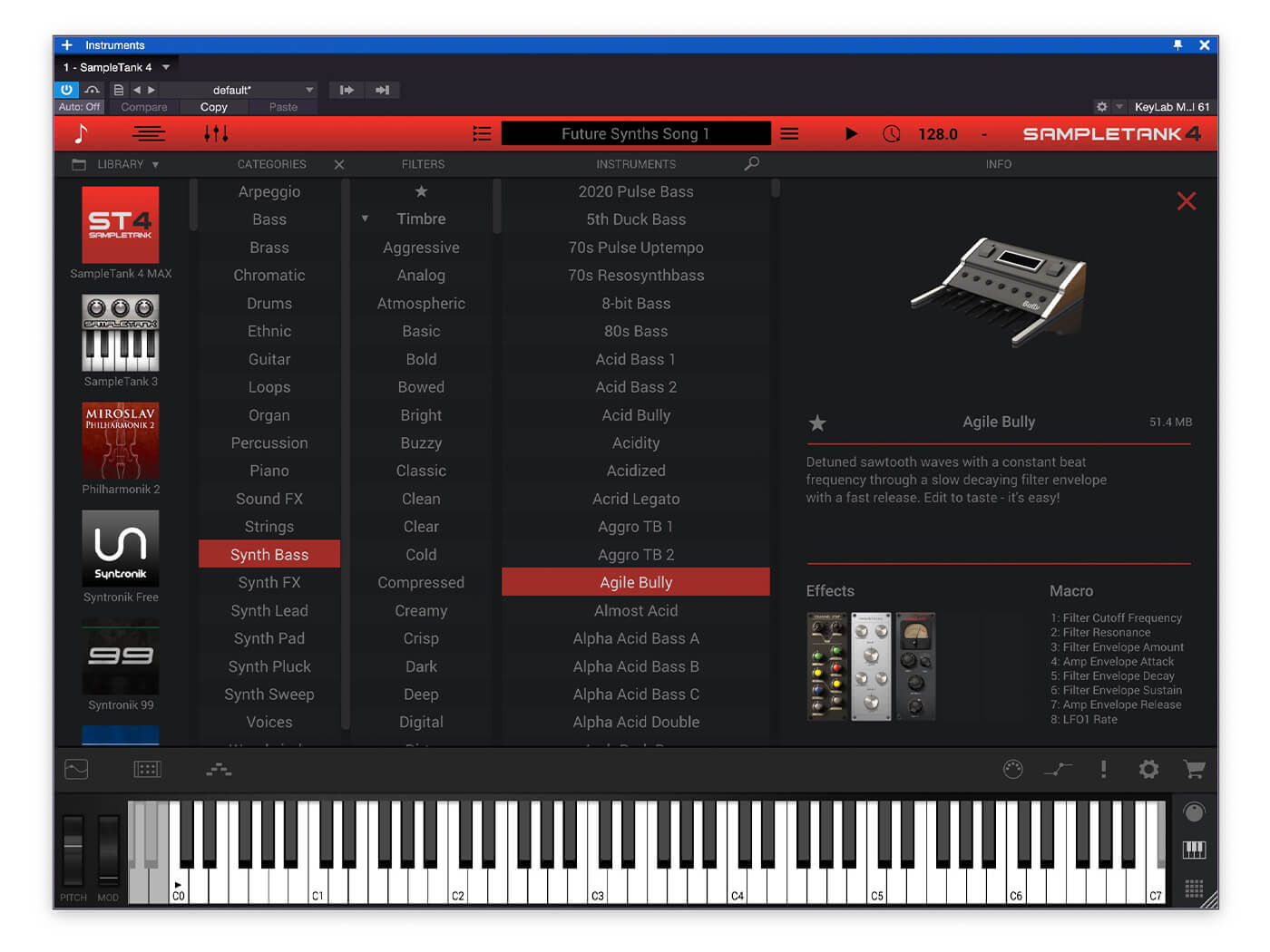 SampleTank 4 also includes “groove players” – performance tools such as arpeggiator, loop player, pattern player and a “strummer”. These are super handy for generating ideas quickly or for performing parts live. Strummer is particularly fun and inspiring as it provides patterns that allow you to perform strummed guitar parts (using whatever instrument you like). It’s limited in its operation, but most producers will find some use in it with a bit of practice.

The other sampler-based instrument is called Syntronik Deluxe, and it gives you access to classic analogue and digital synths most could only dream of playing, much less owning. It also gives you access to many parameters of the sound for tweaking to your heart’s content. Adding to the various parameters of each synth that you can tweak, IK has also added what they call MixBox, which adds 500-series-style effects to each of these instruments. More on that in a bit.

Syntronik already had a sizable library of synths and synth patches, but now in Total Studio 3, they’ve added five more synths based on the Memorymoog, Roland SH-5/SH-2, Korg Mono/Poly and the EMS VCS3, plus and Frankenstein’s monster of a modular drum machine called Modulum. There’s something for everyone in Syntronik, and with over 2,600 presets, you’re bound to find a great starting point. 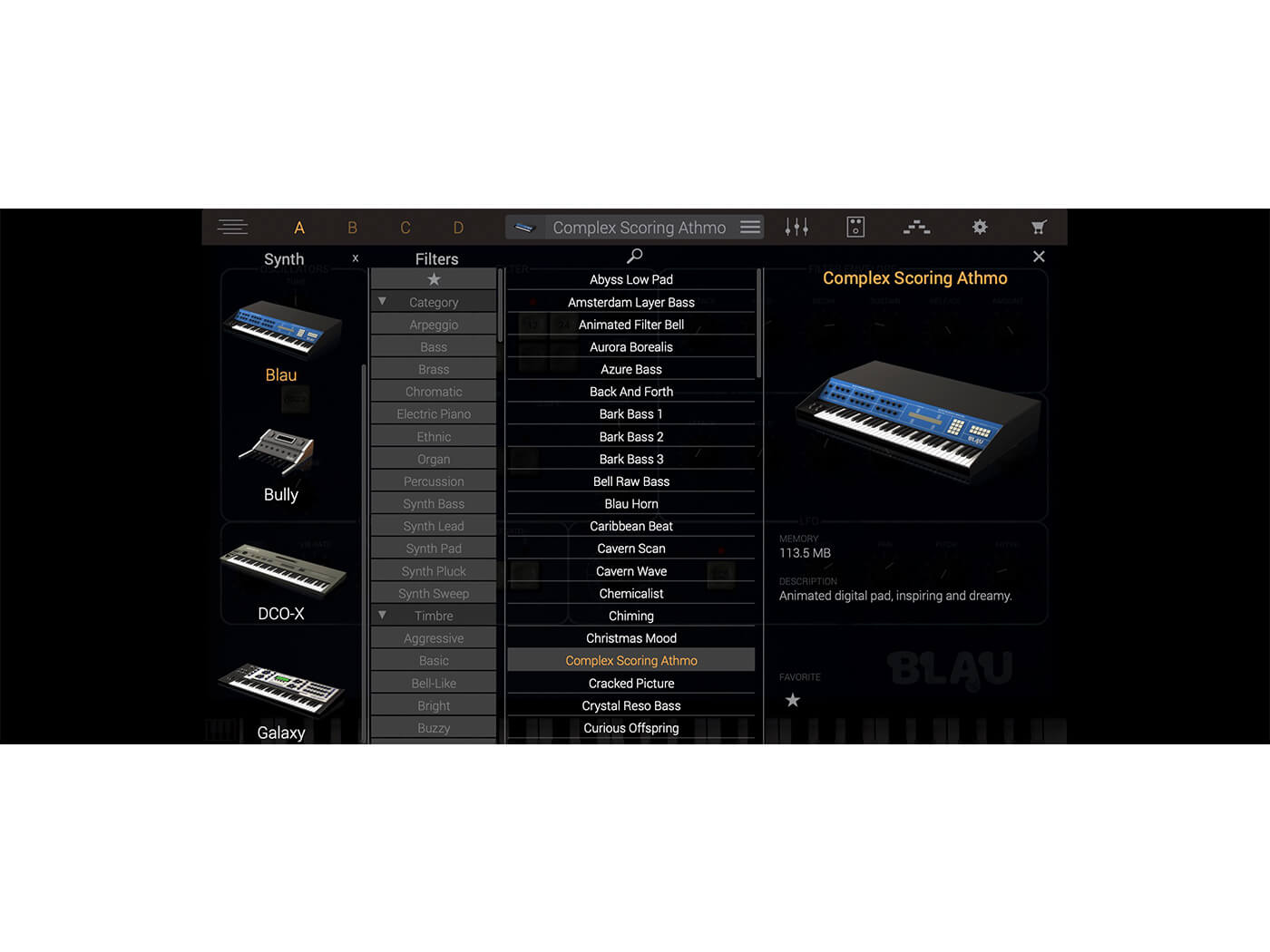 Total Studio also now includes three compelling players for your studio: MODO Bass, MODO Drum and Hammond B-3X. These virtual instruments are modelled after real instruments and are extremely easy to tweak in any number of ways to get just the sound you’re looking for.

The included effects in each of the above are taken from IK’s excellent effects library (including their new Leslie effects). A word of warning, though: you will need a reasonably recent computer to run the modelled instruments together. They are a bit processor hungry. We could run both MODOs and B-3X together, but adding anything else required some extra tweaking of Studio One 5’s settings and some judicious bouncing of instrument tracks into audio tracks. However, the results were well worth it as the sounds are fantastic. 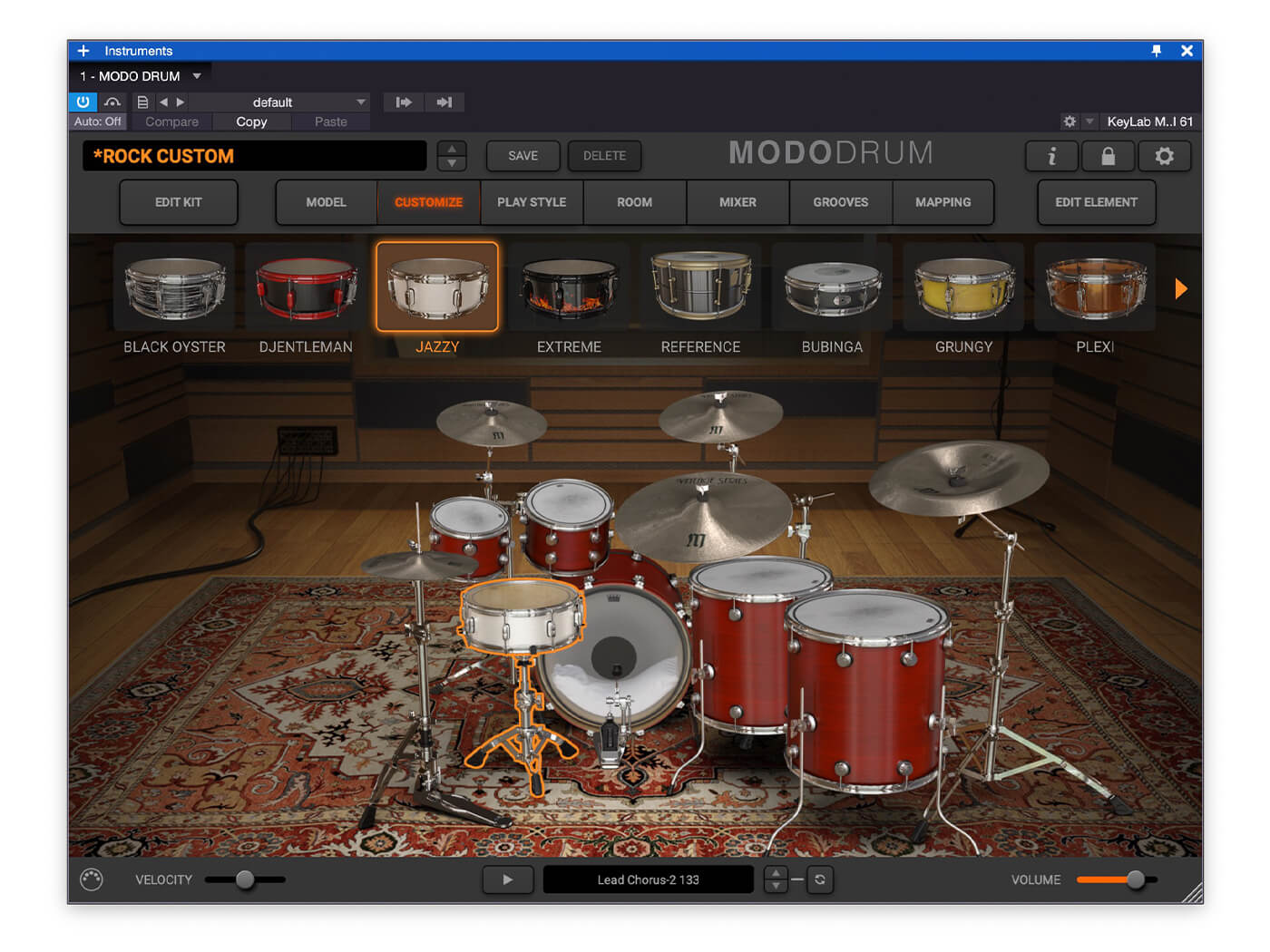 IK’s AmpliTube name is synonymous with stellar virtual guitar effects and amp modelling. In Total Studio 3, AmpliTube 5 is included. It has everything that guitarists expect from AmpliTube and adds four new boutique preset collections, including Brian May, Dimebag Darrell CFH, Joe Satriani and Leslie. Each of these packs for the AmpliTube Custom Shop brings new amp and effects models to your rig that can enhance guitar, bass and even synth tracks. Throwing a Dimebag amp and effect preset on your synth lead turns it into a monstrous screamer. 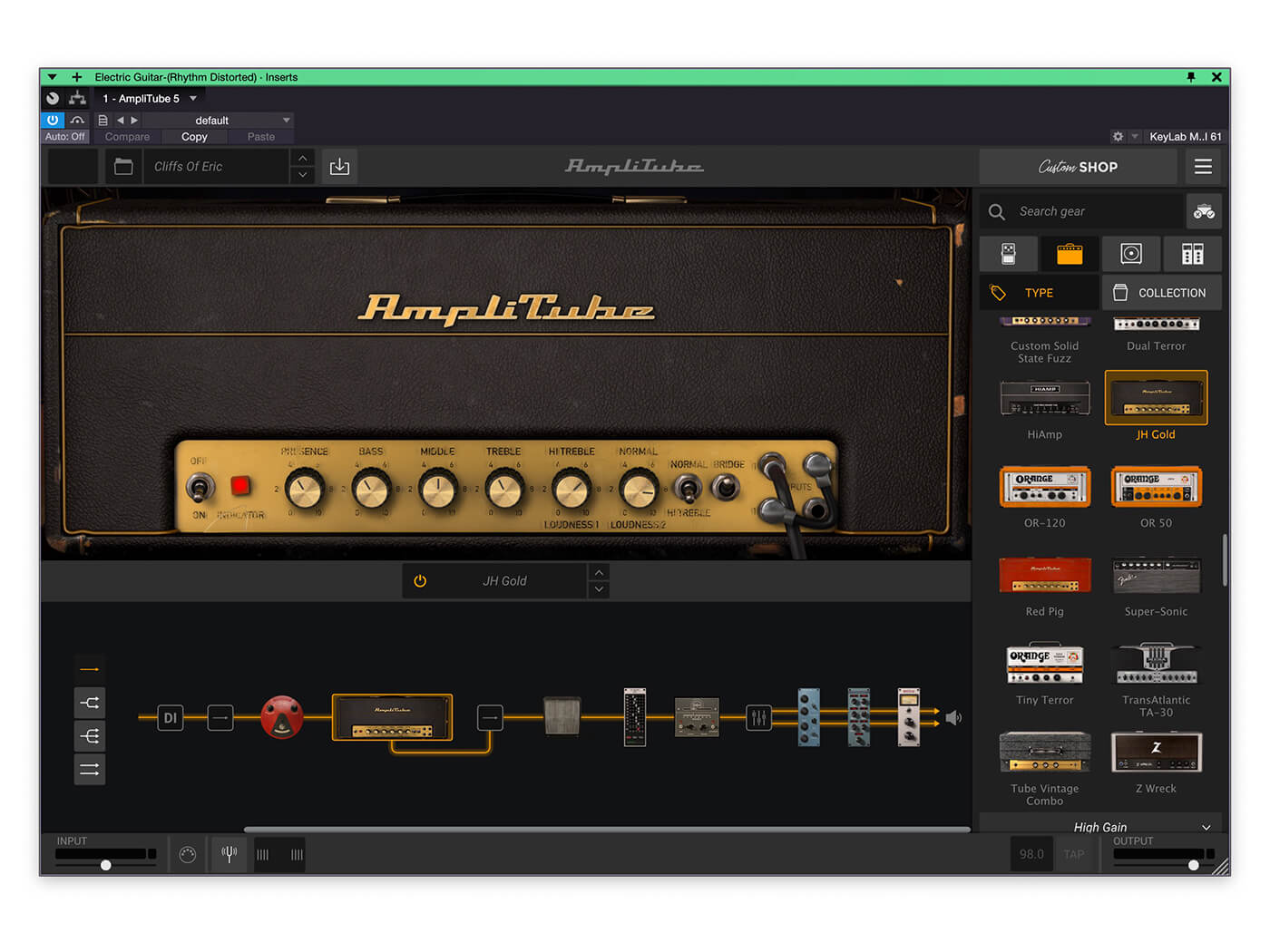 The quality of some of the new processors is truly excellent. We’re rather taken with the lush sound of the Sunset Sound Studio Reverb and the quality of the tape machines. The tape machines impart a warmth that can be subtle or extreme – depending on your needs – and however you use them, they sound exceptional!

Of course, all the mix tools in the world can only go so far if your listening environment isn’t just right. And let’s face it, most of our production spaces aren’t professionally tuned mix rooms. So IK included their ARC 3 software to help you tweak the sound of your speakers in your room so that you can mix with confidence.

Unfortunately, their MEMS reference microphone, which works with the ARC system to help model your room before correction, is not included in Total Studio MAX. However, the mic is only $70/£60.

MixBox is an entirely new addition to Total Studio. It looks and works like a 500-series lunchbox of effects, except that there are over 70 processors drawn from AmpliTube, SampleTank and T-RackS. Creating channel strips of effects to tack onto your synths or a vocal channel in your DAW (or even stand-alone as a live FX processor) is easy. Just click on the drop-down menu in any of MixBox’s slots to choose from the processors. Once you’re happy with your chain, save it as a custom preset. Of course, IK included hundreds of presets for each processor and entire chains, and they sound fantastic.

Interestingly, you can have up to eight effects in a chain, and up to eight virtual lunchboxes in standalone mode. This is perfect for live mixing situations. It’s also fully resizable. 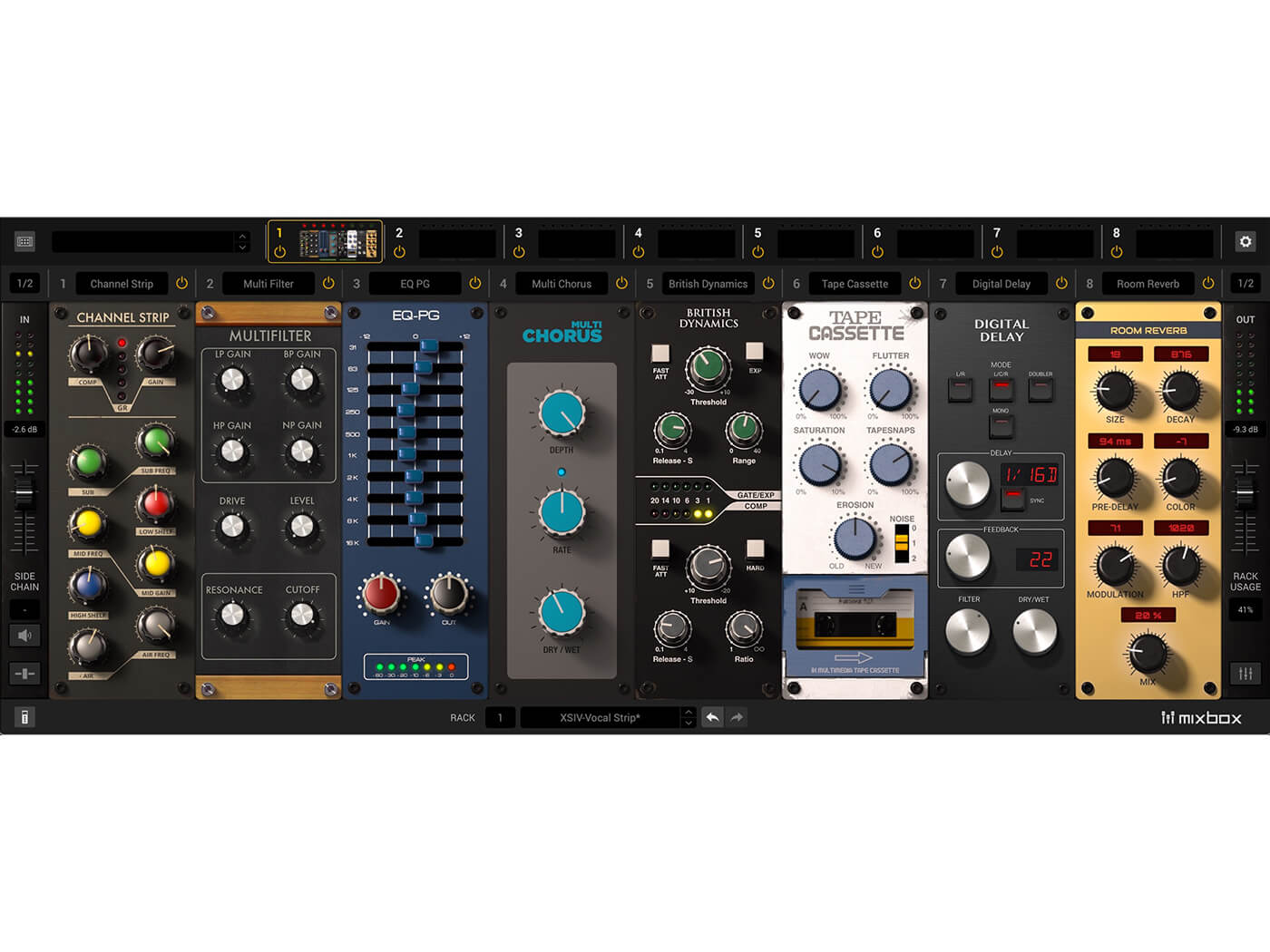 What does all this mean for you? If you can afford to get Total Studio Max, you should. It includes so many instruments, effects and processors that it can cover your productions from songwriting through full recording and production to mixing and mastering.

Everything in this package sounds excellent and should not be ignored. We’re especially partial to the Miroslav Philharmonik 2 orchestral library for traditional composition for an orchestra. That’s how versatile it is. Combine that with all the instruments found in Syntronik Deluxe, and you could compose the next great hybrid soundtrack score.

If you can’t quite stretch to Max, Total Studio also comes in a much more affordable SE version that still includes lots of goodies and can get you where you want to be.

However, easily the best value edition is the iLoud MTM + Total Studio 3 Max Bundle. This includes IK’s super compact professional monitors (and MEMS measurement microphone), worth $700/£600 and everything in the Max bundle. If you’re looking for a studio bundle that gives you everything out of the box, this is a superb deal.