A versatile, wedge-shaped audio interface with onboard DSP and loopback options geared towards creators and broadcasters alike. 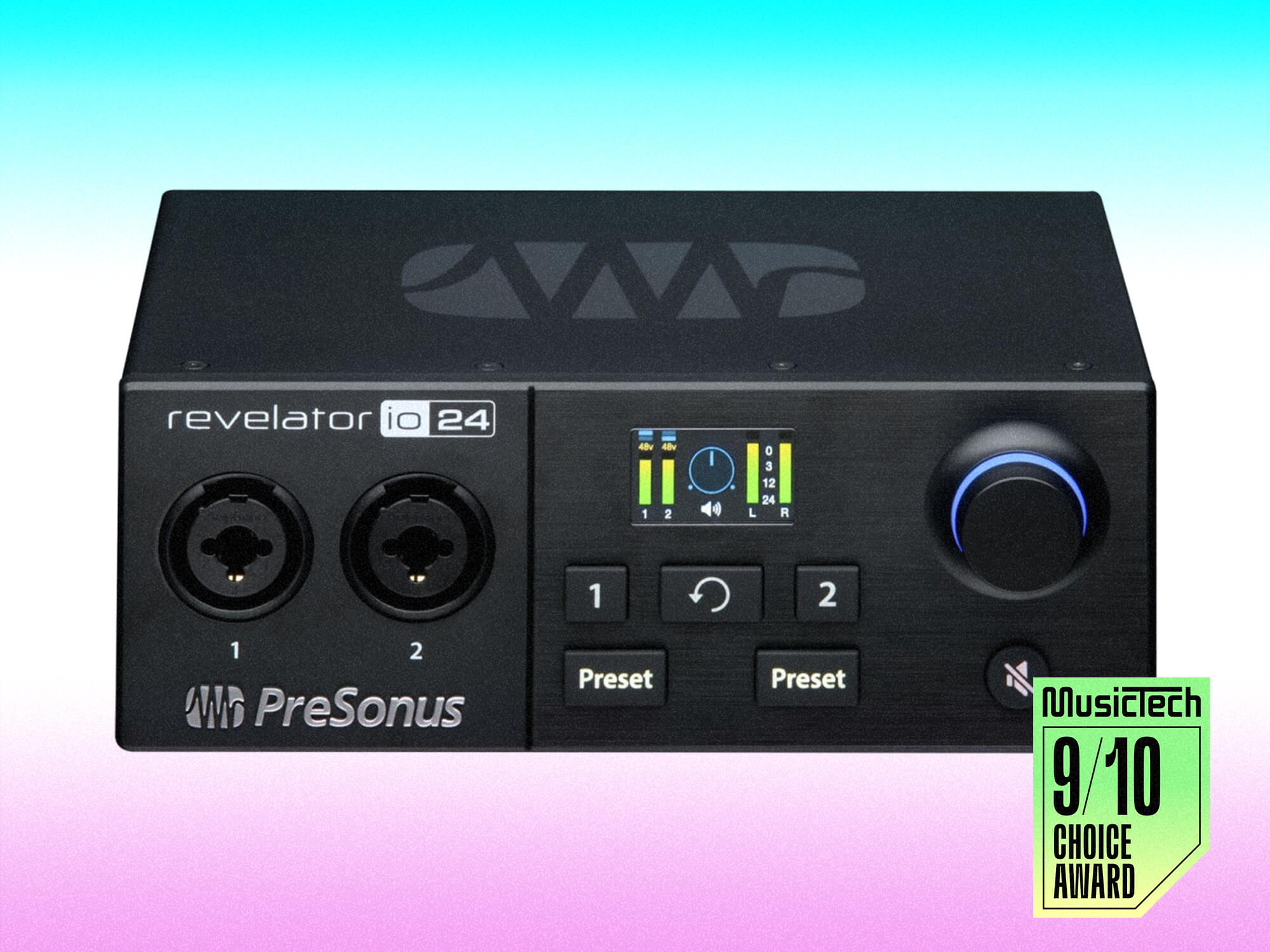 At its price point – and despite a few software niggles – the Revelator io24 is unrivalled in terms of its versatility, with useful DSP and streaming-focused features that rival (and in some respects surpass) more expensive, competing products.

The Revelator io24 is a smart and compact desktop audio interface that’s designed to be easy to operate with its tactile, rubberised push buttons, rotary knob and neat little colour LCD screen. PreSonus has added lots of extra handy features for recording artists and podcasters or live streamers, making the Revelator io24 a step up from most two-input interfaces.

An onboard DSP version of the Fat Channel taken from Presonus’s Studio One DAW is available on each input channel. Handy presets give novice users a starting point when dialling in sounds, plus a range of loopback options for feeding and routing audio in a live stream. Within the product range, the io24 interface sits alongside a USB microphone variant known simply as Revelator. The io24 works on all major platforms, including iOS, and comes with native support for the most recent Apple processors, like the latest M1-equipped MacBook we tested it on.

Out of the box, the io24 sits nicely on the desktop, with a tough metal case and sturdy controls. The little LCD screen is a very welcome addition to the feature set, but it’s hard to see the whole display when the interface is below your eye-line. It works much better on a higher shelf, such as next to monitor speakers. The rotary control can be pressed to cycle through setting various levels. When either of the input buttons marked 1 and 2 are pressed, you can access various preamp functions including a high pass filter, gain and phantom power (which is individually switchable).

The simplicity of navigation works well here, but we found it proved slightly too easy to switch phantom power on and off – you’d need your wits about you when using mics that might be damaged by applying voltage. Metering is neat and handy on each input’s screen, including a clear display of gain level, the incoming input level and a gain reduction meter showing the effect of any compression or expansion in the DSP chain.

The dual combi mic/line/instrument sockets are accessible around the front, while balanced line outs and the single headphone socket are tucked away around the back. Those with legacy MIDI devices will be happy with the inclusion of a MIDI in/out port. Control wise, aside from the main rotary controller and input selectors, there are buttons for accessing DSP presets, a back navigation button plus an oh-so-handy mute button for the main outputs feeding monitor speakers.

The onboard preamps sounded really nice when put to work in a recording session, and we were impressed by the sharpness of transients in commercial music played back from the DA converters. On paper, the dynamic range figures for the converters don’t look as good as some rival interfaces in this price range, but you have to argue that the Revelator offers far more in other departments. Digital gain-setting on inputs gives the user a chance to match channels, which is relatively rare at this end of the market and is especially great for stereo mic combinations.

It’s also possible to save and recall gain settings as part of a scene in the Universal Control software. The flexibility of using the control software on a tablet too is a real winner, particularly for those times where you have a single monitor screen and want to adjust audio settings without changing apps.

Hardware controls make it easy to set up a very basic headphone mix by adjusting the balance of input and playback signals respectively. Going a step further, we assigned the master mix in Universal Control as the headphone source and set up a custom holdback mix using the faders and pan controls on the virtual mixer.

We did come across a bug whereby when the Fat Channel DSP was turned off, a centre-panned input signal was pulling to the left in the headphones. The output meters confirmed that we weren’t imagining it, but we were able to counteract this easily enough. PreSonus engineers have assured us that this will be ironed out in a future update.

With the Fat Channel enabled, the above panning issue disappeared, and we set about shaping the sound to help our singer to feel more comfortable when laying down takes. Things were more consistently audible and ‘on-mic’ in the headphones with some light EQ and compression present, and all without noticeable latency.

By default, all Fat Channel settings and processes are reflected in the recorded audio. As we were wary of over-compression, we flipped a switch in the preferences so that only the raw input signal was recorded.

It’s a shame that you cannot record both the unprocessed and processed version of the input signal simultaneously – as you can on more expensive rival systems – but the Revelator is in a very different price range.

After all, it’s simple to recreate the processing you had using plug-ins in Studio One. The bundled Artist version of Studio One is perhaps the most useful and user-friendly entry-level DAWs out there and has just about everything to get you going. The additional Studio Magic bundle is also very useful, with some great Plugin Alliance offerings plus a decent UVI Steinway instrument.

You do have to jump through a few hoops to get everything installed, but it’s certainly worth the time sifting through the array of goodies to see what works for you.

First in the chain on the Fat Channel DSP is high pass filtering. This is followed by noise gating, EQ, compressor and limiter, including passable emulations of vintage analogue gear that are more flattering to the incoming signal than clinical digital processors (Pultec style tube EQ, anyone…?)

The effects won’t rival the likes of Universal Audio, and there’s no vintage pre-amp or guitar amp emulations as you might find on those sorts of devices. However, what’s offered here is perfectly fine for creating a convincing headphone or streaming mix. There’s an additional voice processor at the end of the chain for changing your voice in creative or silly ways, which is assignable to one input or the other in settings.

All Fat Channel settings can be saved and recalled in user memory. The two main presets are all set up and ready to go on the two inputs when you first use the interface. Presets are great as a starting point for the uninitiated, but we would rather these were bypassed to start with and could then be subsequently turned on.

We strongly recommend that users should check the sound and clarity of the input signal before adding multiple signal processes – the confusion of hearing unexpected sound qualities here far outweighs the intended ‘convenience’ PreSonus have baked into the user interface.

Reverb is added using a send and isn’t printed to the recorded signal. Unfortunately, the algorithm is quite basic, and is noticeably metallic on longer tails. Shorter settings – with lower send levels – are usable for headphones mixes, but in one of the intended uses of the interface as a digital mixer for a live stream, this aspect is really lacking. Perhaps the manufacturer could look at allocating more memory to the reverb, or limiting it to a higher quality but shorter algorithm in a future update.

Jump into the stream

A range of streamer/broadcast friendly features have been incorporated into the Revelator’s functions. This includes alternative virtual inputs/outputs you can use to loop audio back from various apps to the Universal Control digital mixer, and then send onwards as a single stereo stream. This feature is very handy for combining audio playback and microphone input as a variety of streaming applications. It also removes the need to buy additional loopback software, which is a definite plus point given the recent growth in online meetings and presentations necessitated by working from home.

We really enjoyed the LCD coupled with simple navigation and hope there might be a bigger Revelator io in the making that has more inputs/outputs, a second headphone socket and updated converters.