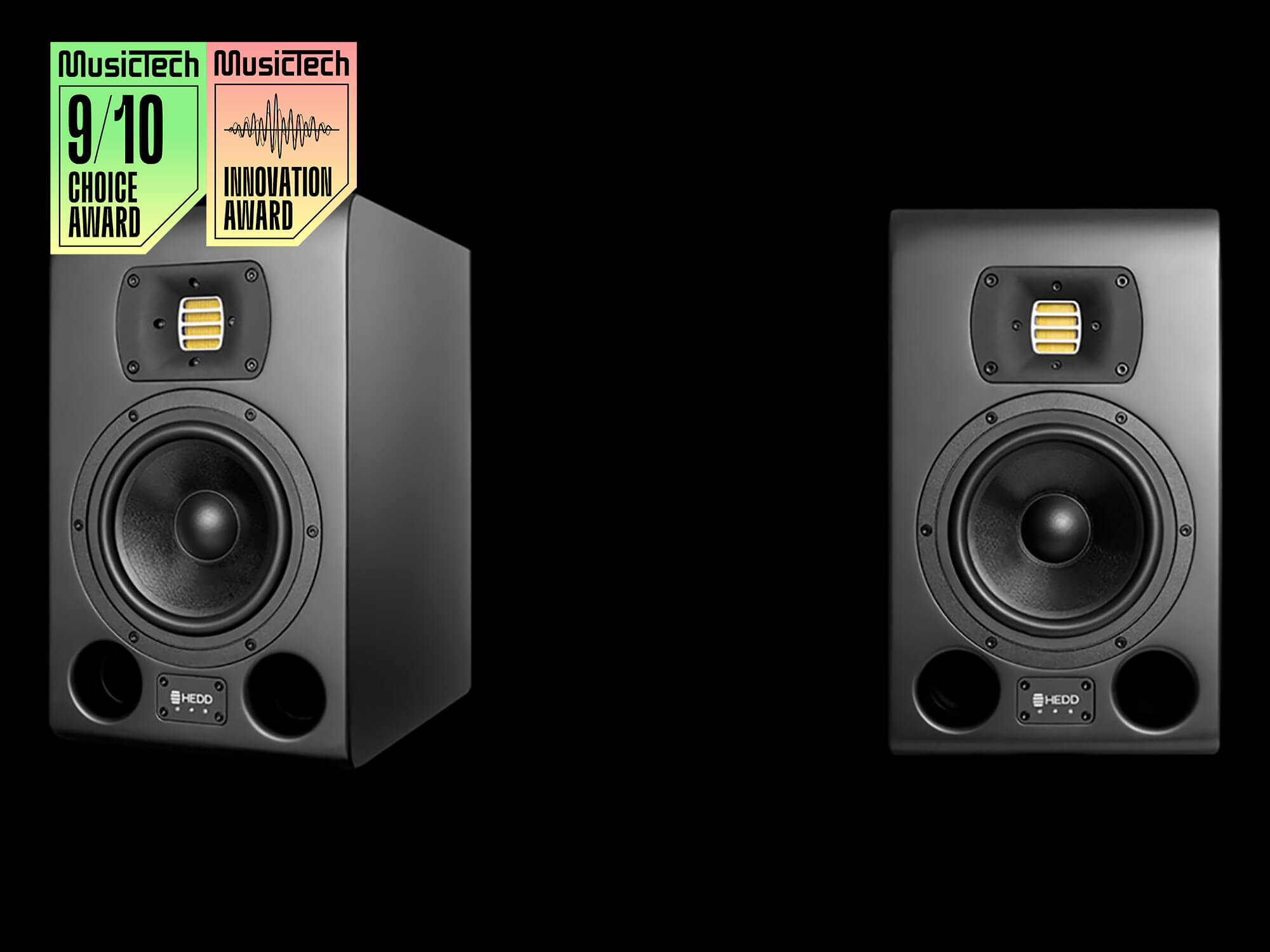 The first version of the HEDD Audio Type 07 monitor already had a wealth of history behind it. HEDD Audio’s CTO, Klaus Heinz, also co-founded and was the principal technical innovator behind Adam Audio. The latter company’s A7 and A7X nearfields set the standard for keenly priced, great sounding 7-inch active monitors.

With HEDD Audio, the focus was to take the original design principles forward and be as innovative as possible to help users. The first HEDD Type 07 was received very favourably, and the MK2 model on test here offers a wealth of improvements upon the original design. Most notable are the inclusion of digital (AES) inputs as standard, built-in Lineariser digital signal processing to provide both a linear frequency and phase response (previously only available in software plug-in form), plus a relatively novel option to close the bass reflex ports on each monitor for better bass articulation.

While these monitors have a couple of minor drawbacks for recording musicians, they pack in a lot of innovation for a reasonable price and sound fantastic.

Like the preceding HEDD Type 07 model, the MK2 features a 7-inch woofer plus a 1.5-inch Air Motion Transformer (AMT) tweeter. It has a front, dual-ported design. However, special foam plugs are supplied in the box to close the ports. A corresponding selector switch around the back changes the DSP to account for the closed ports, reducing the output level.

When installed on our studio desk, the Type 07’s black satin finish oozes class. Meanwhile, for those who prefer a lighter finish, they’re also available in white.

Below the drivers and between the bass ports are three status LEDs that light up to indicate power on, standby mode and overload – all valuable features to have at a glance.

There are plenty of options around the back for tuning the speaker’s response, all handled by neat brushed aluminium knobs which have satisfying clicks. Controls include a desk correction filter, high and low shelf EQs, plus the opportunity to extend the bass response from the standard 38Hz down to a throbbing 30Hz at the turn of a knob (although this too leads to a reduction in output level to allow extra headroom).

There’s also a high-pass filter for use when pairing the Type 07s with a subwoofer in a 2.1 (or larger) playback configuration, accessible from the same physical control as the bass extension. Inputs are on XLR connectors, with a more standard analogue in plus an additional AES digital connection.

To put the new Type 07s through their paces, in addition to auditioning some of our own, familiar mixes we listened to an eclectic range of commercially released music in a controlled listening environment. By way of comparison, we did an A/B test against a level-matched (but much more compact) set of Genelec 8020 series monitors that we had to hand.

The HEDDs sound glorious on a wide range of music, with no obvious scooping or hyping throughout the frequency range. They don’t need to be played loud to experience the deep, articulate low-frequency range. We found the closed port option handy for a more revealing low-end response, with even greater articulation in this range and not an insurmountable loss of bass. The ability to switch between ported and unported (infinite baffle) modes could be handy for working in untreated rooms or comparing mixes on two different types of speaker system when mixing or mastering. Although a neat option, it’s not a swift job to install the port plugs, though, so you wouldn’t exactly be able to A/B between open and closed modes.

Meanwhile, with the ports wide open, there’s little need for the included bass extension option, which tends to make things a little lumbering and overpowering in our listening environment (but again, great for comparing playback system configurations). We can hear and feel the sub bass clearly, and there’s amazing low-frequency punch – attributes that were somewhat lacking on the original Adam A7s.

The built-in Lineariser evens things out, and for the most part, we don’t notice the 10ms or so or latency it introduces during playback. It’s a different story when tracking. For example, it’s trickier to trigger virtual instruments or record a guitar routed through software effects and monitoring without encountering unusable lag. Although the Lineariser control is on the speaker’s back – which is a little frustrating – it is pretty easy to locate and switch it off when required. If you’re happy to record using headphones, this is less of an issue.

These monitors can be genuinely trusted for critical listening when mixing and mastering, with great separation of elements in the often-cluttered mid-frequency range. They also provide excellent clarity into the finer details of transients, drum sustain and reverb tails. Stereo imaging is right on too. The HEDD Type 07 MK2s sound easily as good as rival loudspeakers costing many times more.

However, there is one elephant in the room. On the review set, we encountered a slightly louder-than-expected level of hiss coming from the Type 07s when in a near-field position. This proved to be a constant, even with sensitivity and output levels at their lowest and audio interface outputs muted. The result was also the same when we tested them with nothing plugged into the inputs and on a different mains circuit. While this may not bother some users – or even be audible from a more mid-field listening position – during quieter moments in the studio and at close distance, the noise can be distracting enough to consider manually switching the power off. Incidentally, our little Genelecs don’t suffer from this issue, with hiss only audible with an ear pressed right to the tweeter. Granted, this isn’t a fair comparison since the Genelec amplifiers are far smaller (2 x 20W compared to 2 x100W inside the HEDDs). Nonetheless, we’d be much happier with less obvious self-noise.