Rounding out Native Instruments’ trilogy of ultra-capable granular synthesizers, Ashlight arrives with a decidedly darker and more rhythmic focus than its forebears. 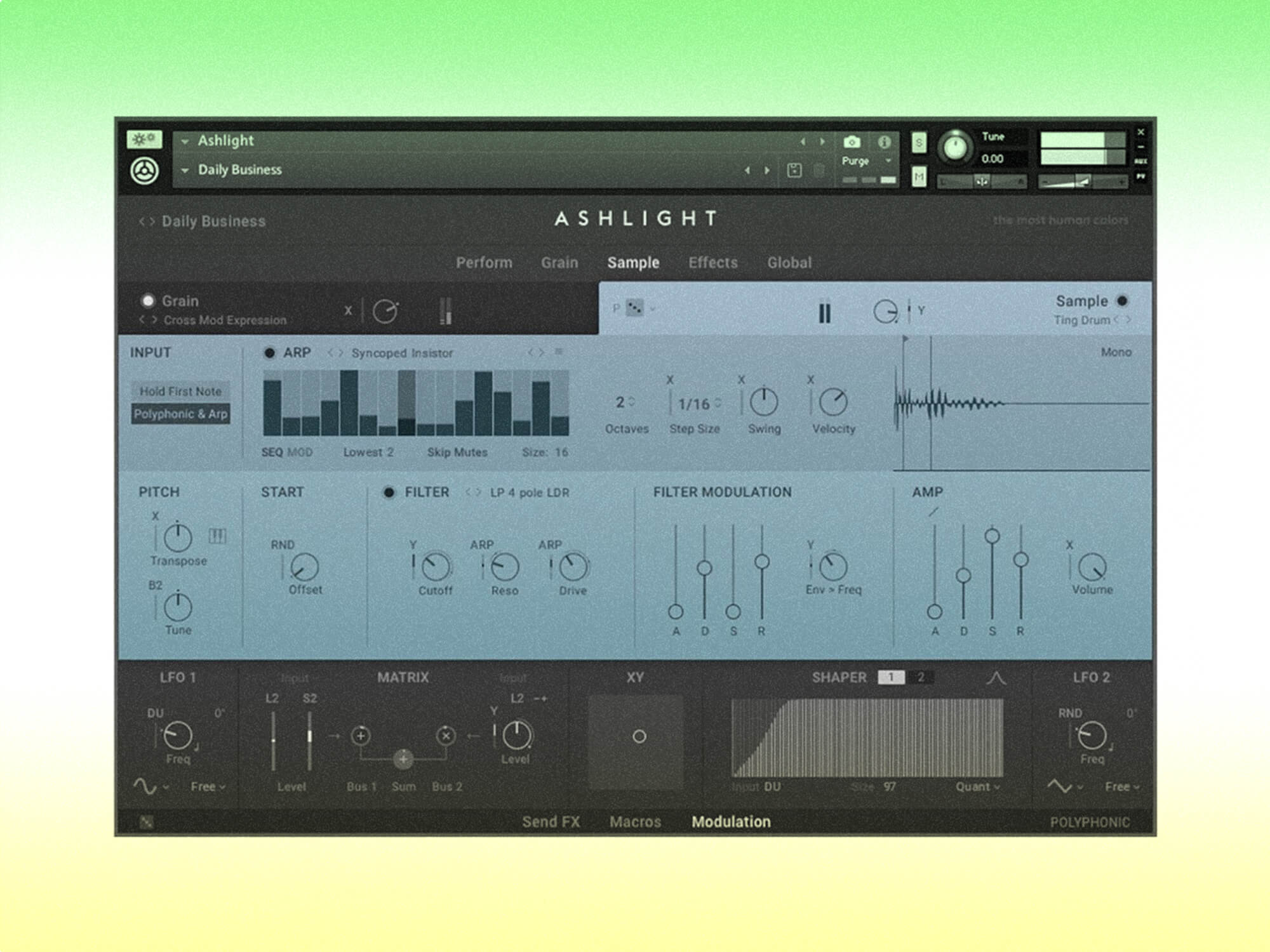 ⊖ Pricey when viewed in context with its predecessors

Granular guru, Frank Elting, is back to helm the instrument’s design in collaboration with cinematic sound design team, The Solos. The Amsterdam based collective’s signature sound has featured on countless high-energy movie trailers and TV shows. Now they’ve brought their ear for intensity to Ashlight, and, together with Elting, they’ve curated a selection of 363 sonically rich samples, and 320 presets.

The sounds are great, the synth is awesome, but is there enough new content here to justify the price tag and keep fans of the series coming back for more?

The guts of Ashlight remain essentially unchanged from its older siblings, and we have no complaints. Rather than try to re-invent the wheel, Native Instruments has opted to focus on adding a few cherries on top of their already-supercharged granular synthesizer. We won’t spend too much time going over features covered in previous reviews; suffice to say that the power of this instrument is built around the combined output of a granular engine, a sample engine, and a hugely powerful modulation and routing system.

Ashlight lands with a slick new library of brooding and unusual sounds. Metal hits, polystyrene squeaks, bowed carbon, and swirling waterphones are all on offer here. Each one is carefully selected to offer maximum ‘granular’ potential. Exploding and recombining these sounds is immense fun and yields some impressively detailed tones and textures. It’s a stunning resource if you’re looking to build your sounds up from scratch, or if you’re looking for quick inspiration, there’s a seemingly endless selection of performance-ready presets that show off what the engine is capable of and provide a starting point for further experimentation.

Flicking through the library, it’s clear this is not an instrument trying to wear many hats. It’s aimed squarely at the cinematic side of music and sound production, and specifically at projects that call for a dark and gritty aesthetic.

Fundamentally, it’s a genre instrument, and while it’s entirely possible to pull some evocative and beautiful timbres from the library, this is not where it excels. Creating the kind of soundtrack mainstays you hear in the action, sci-fi, and thriller genres are what Ashlight does best. Epic percussive hits, grinding risers, and tension inducing drones are easy to accomplish here but are also, crucially, very easy to tweak. A bit of tinkering has a big impact, and you don’t have to work hard to get something that sounds personal and distinctive.

And although this instrument has a clear bias toward sound design and film composing, there’s plenty here that sits in the grey area of avant-garde pop. Granular synthesis’ potential in songwriting shouldn’t be dismissed out of hand and it’s perfectly possible to drop your own samples into the engine, so while Ashlight’s library is intentionally narrow, the potential of the instrument is not.

The improvements in Ashlight’s sound engine aren’t numerous, but they are certainly welcome. The most notable is the new arpeggiator. It’s handy for creating rhythms and melodies but, more than that, it works beautifully to add scattered textures and evolving noises to pads and drones.

NI hasn’t skimped on the functionality here. There are 32 steps that you can use as a sequence or a modulation source. There are also various arpeggiation modes to choose from and standard settings such as swing and velocity. Beyond that, the arpeggiator comes with several rhythmic presets to get you started, as well as valuable operations like humanise, randomise, and double resolution that can quickly re-shape your sequences.

MIDI Polyphonic Expression (MPE) is another fine addition. MPE allows a DAW to define modulation on a ‘per note’ basis, exponentially increasing users’ level of control over chord articulation. Producing sounds that have movement and variation is really what the ‘Light’ series has been about. The inclusion of MPE adds even more power to the engine’s already formidable expressive potential.

There is a lot to like here. The new sample library is full of interesting and ear-catching sounds, all of which have been recorded with the kind of quality you’d expect from Native Instruments. The synthesizer itself builds on the already impressive foundations laid by Straylight and Pharlight but adds new rhythmic and expressive possibilities.

However, if you already own one of the previous titles in the series, then the choice to purchase this third and final entry is not so clear. Ashlight feels more like an update than it does a whole new instrument release. Discounts are available for users of the last releases, but some might be left wondering if it’s worth the additional investment even with the price reduction. Native Instrument’s decision to package these as three standalone releases – as opposed to a single instrument with multiple expansion libraries – may make economic sense, but it feels a bit redundant from a user perspective.

That said, if you’re a newcomer to the series, then Ashlight is a safe bet. The engine is intuitive, musical, and very satisfying to play with. Whether you’re looking for fast and accessible sound manipulation or a deep dive into the micro world of granular synthesis, Ashlight’s powerful engine has the scope to keep you covered.