The Audient Sono interface is a feature-packed collaboration between studio stalwart Audient and cab-sim specialists Two Notes – could it take care of all your recording needs? 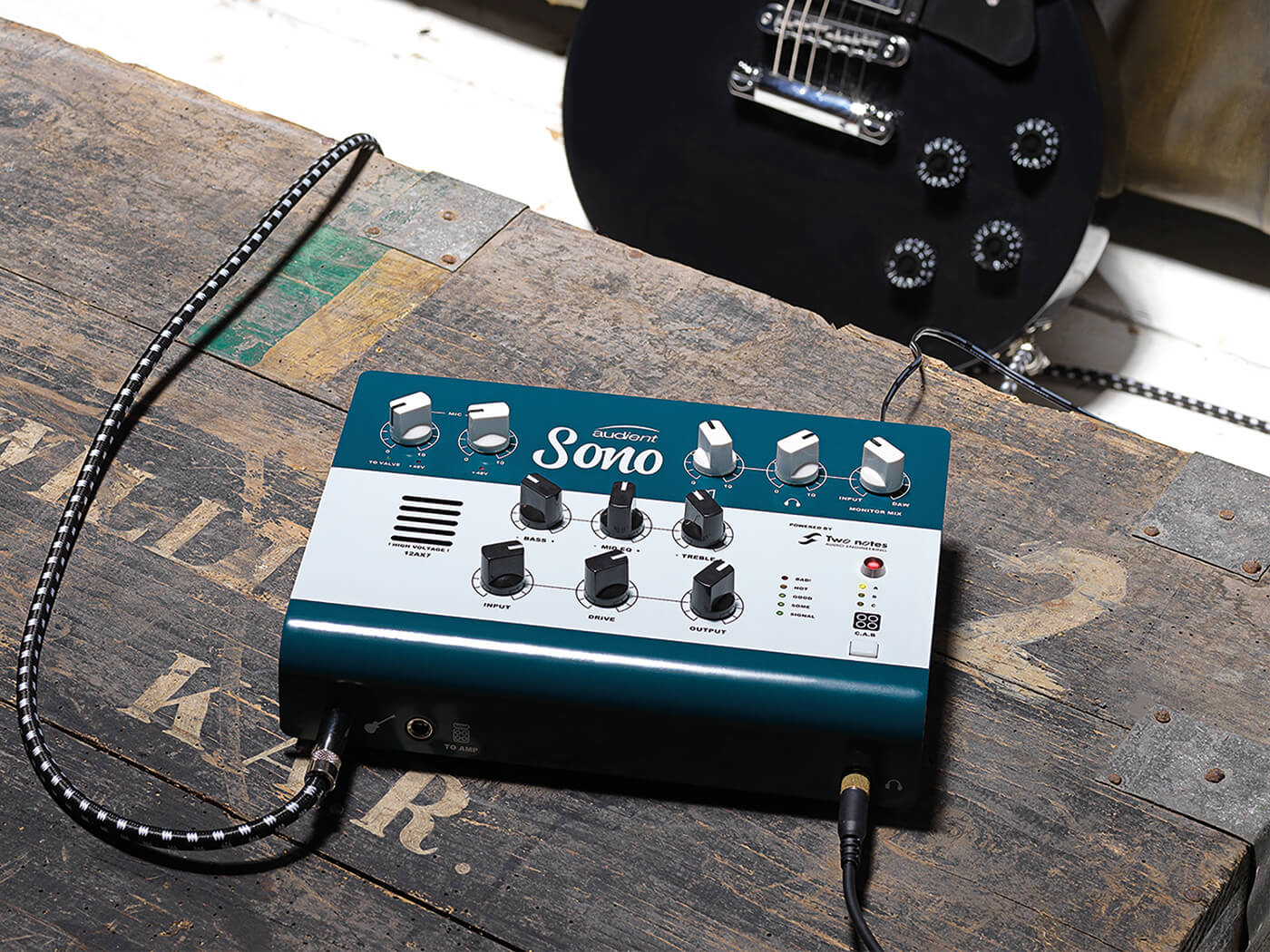 The Audient Sono isn’t merely a preamp, audio interface, load box or cab sim – it’s all of those at once. Designed for guitarists, this collaborative effort between Two Notes and Audient aims to become the centre of your recording rig at home.

You can connect one guitar or bass, as well as two microphones or line-level instruments. Outputs, for the most part, are kept simple: a pair for monitors, one for cans and a re-amp out (more on that later). The software, though, is the highlight of the Sono. Designed by the cab-simulation experts at Two Notes, it lets you switch cabinet emulations, adjust microphone distances and perform other granular tweaks. 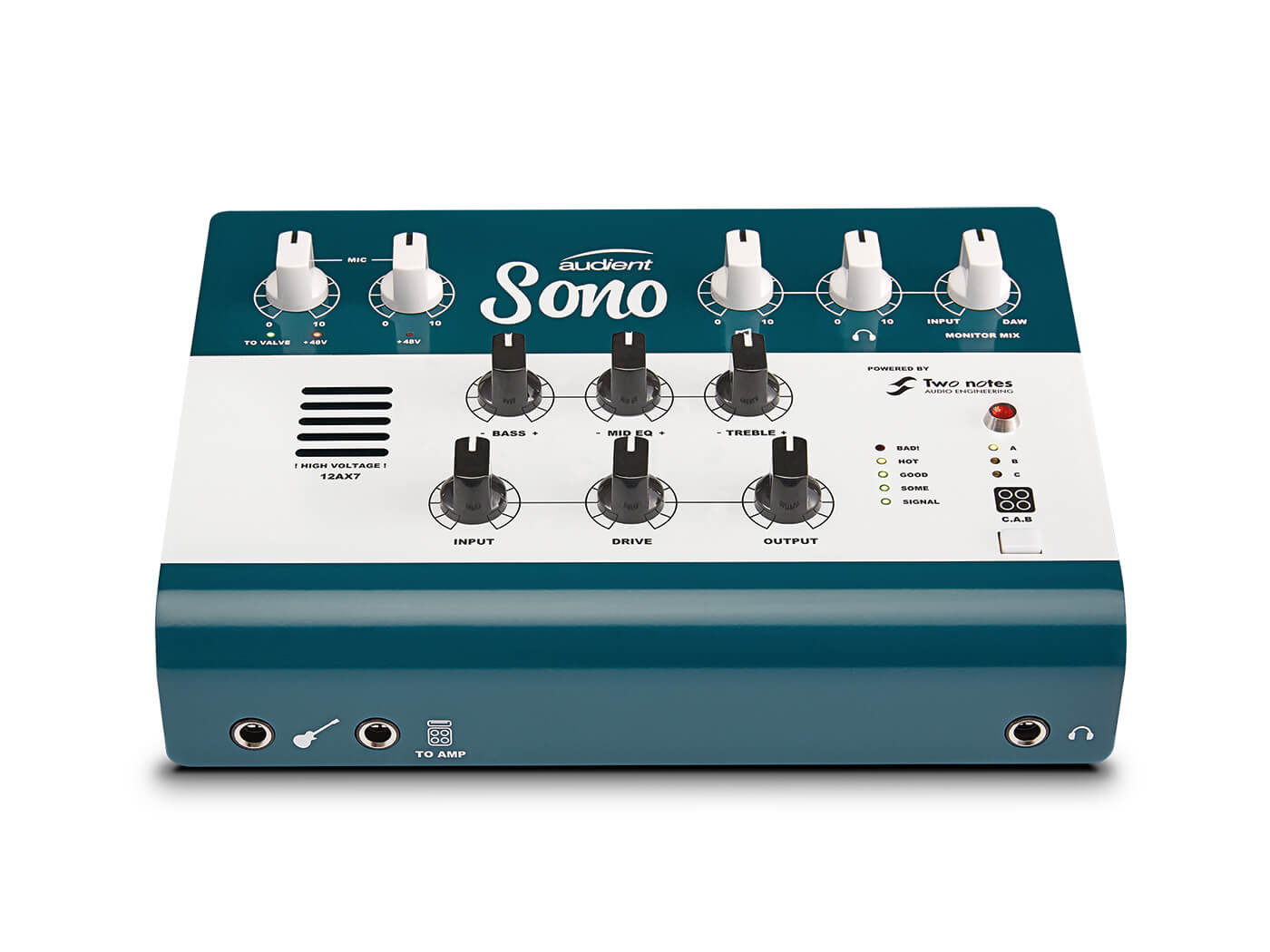 However, the Sono doesn’t provide amp modelling. Audient is known for its high-quality recording consoles, so it’s no surprise that the Sono is fundamentally about quality analogue tone – not digital wizardry. There’s even a 12AX7 tube within the sleek chassis. But that said, swapping virtual speakers can still transform a good tone into a great one.

The Sono delivers on the stage and at practice sessions, too. You can save up to three presets on the device, which can then be hooked up to a friend’s computer, studio mixer, front-of-house, or to headphones for silent jamming.

Getting Sono integrated into your setup isn’t just a case of plug-and-play; there are a few downloads involved in the setup process. One to drive the device itself and one for Two Notes Torpedo Remote, where the virtual cabs live. Yet, it’s relatively simple to get hardware and software working well together, and there are both USB-C and USB-A cables included.

The Sono’s core tone is clear and crisp. Guitar enthusiasts will note that it’s reminiscent of Fender amps, but it’s versatile enough to almost be considered a multi-amp modelling machine. The EQ controls are musical, the drive section is smooth, and then there are the cab emulations. 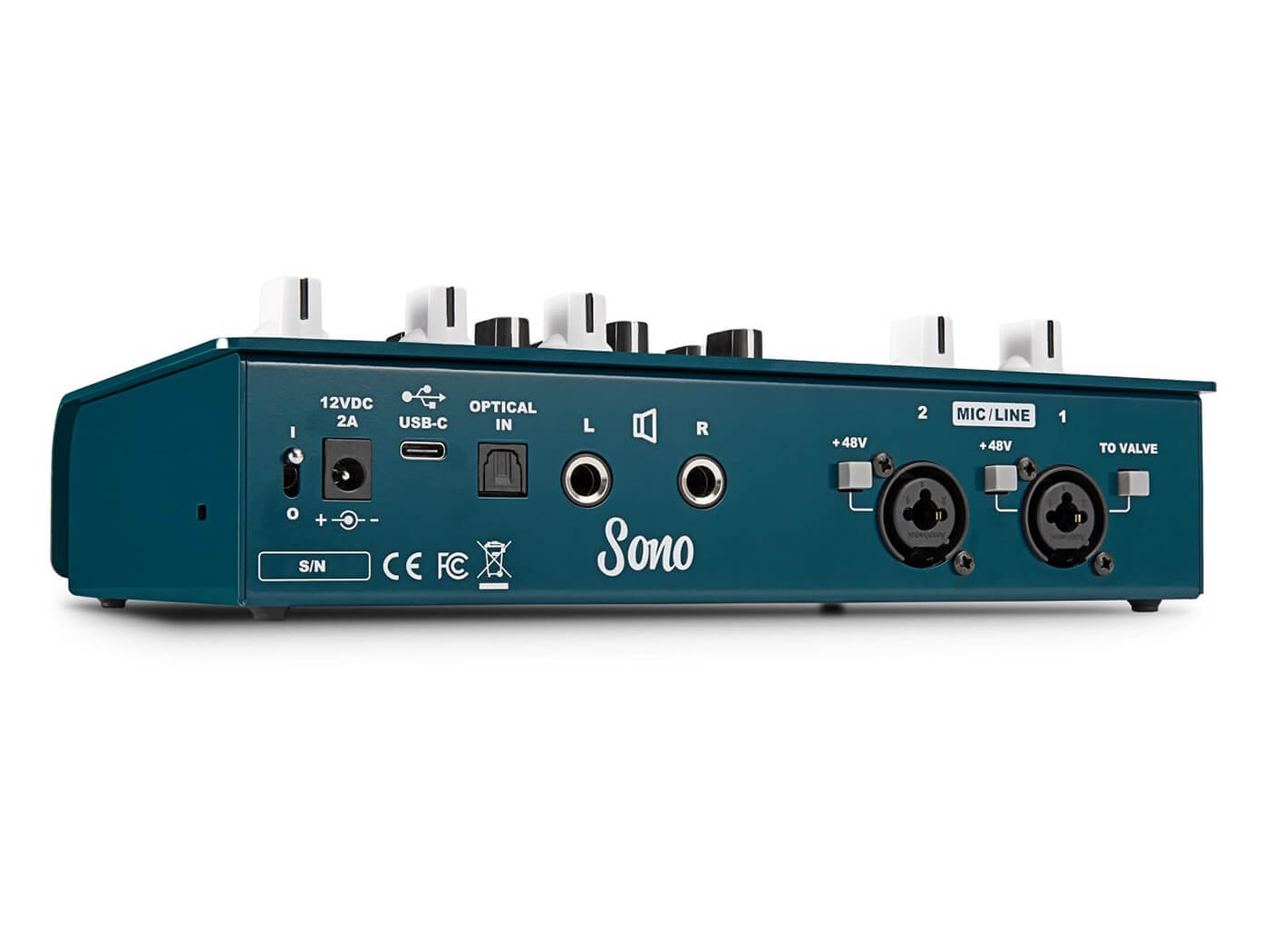 The Sono offers hundreds of cabinets of all types, sizes and speaker configurations. The catch? Most are only available at €8 a pop. What you do get out of the box are four pre-loaded onto the device and 16 with the accompanying software.

The four installed cabinet models will be familiar to guitarists: a 2×12 Silverface type, two 4x12s and what appears to be a 1×15 Ampeg Portaflex bass cab. They all sound convincing, and you can cover a huge amount of tonal ground with the full set of 20, especially when you factor in the other parameters on offer. These include seven virtual mics plus a powerful contour control for shaping the mids between vintage (bumped) and modern (scooped) extremes.

In addition, you have eight modelled spaces to pick from: live halls, cathedrals and studio rooms, among others. It sounds better on paper than in practice. The reverbs are rather clangy, so we expect most people to keep the microphone distance as short as possible then adding reverb from other sources later. 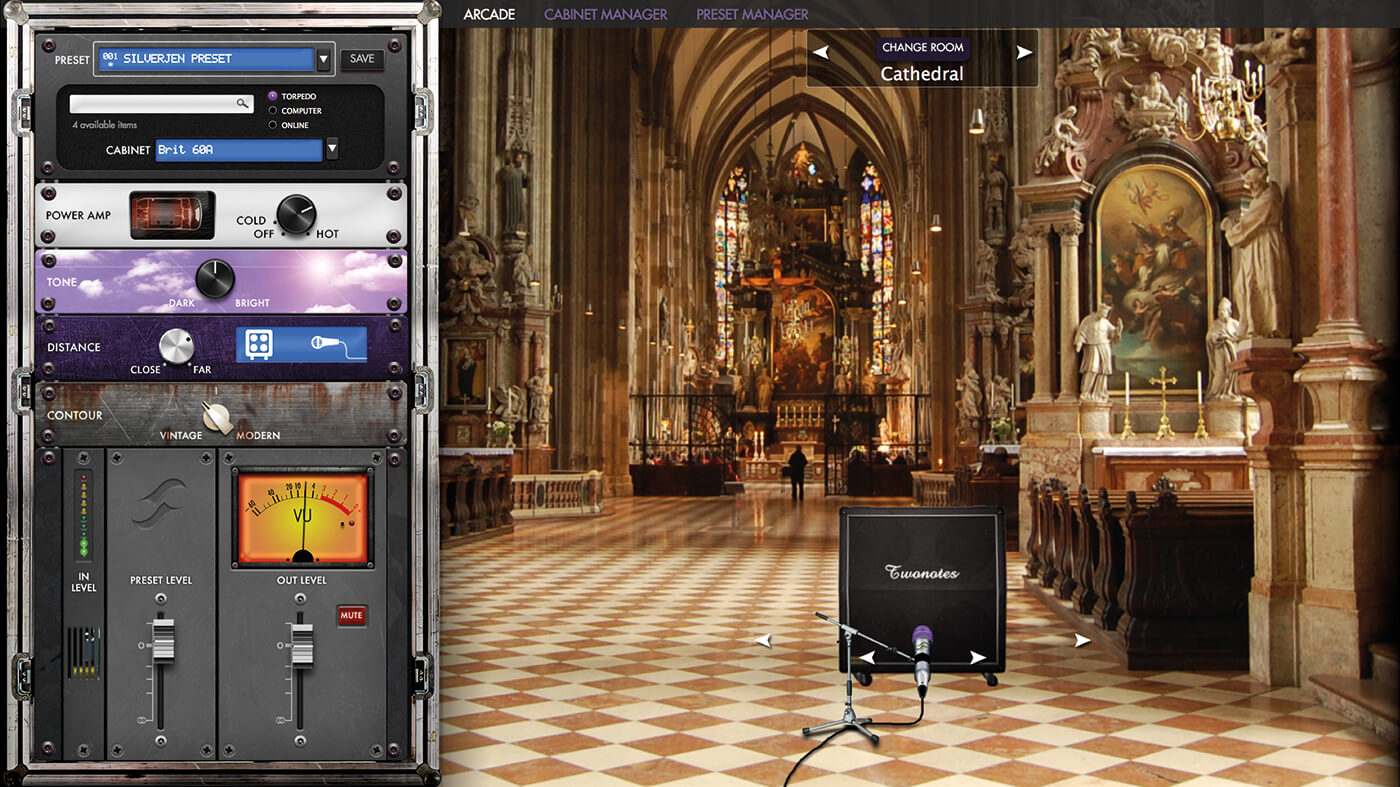 Vocals and instruments recorded via the mic/line inputs sound clear and pure because they employ the same Audient console pres found across all the company’s products. The tube preamp and its EQ section also work wonders on a variety of sources.

Audient describes the Sono as a ‘10 in, 4 out’ interface… so what happened to all the other inputs? Well, you’ve got them already – that is, as long you have access to an eight-channel external ADAT expander such as a Focusrite OctoPre or Audient’s own ASP880. You can run this into the Sono’s optical input to expand your multitracking options if you’re planning to record a live band with drums.

And the fourth output (after monitor L and R plus headphones)? That’s the re-amping port on the front, marked – intuitively enough – ‘to amp’. Cleverly, while you’re recording through the valve preamp and Torpedo Remote on one track of your DAW, the Sono lets you record the untreated DI signal on another track. This clean track can later be routed back out through the re-amp output and into a real amplifier and recorded with a real microphone.

Now, that might seem a little odd when the whole point of this product is to let you record without real amps and mics. But if you come up with a killer guitar part when you’re housemates are asleep, and you know it’s only really going to work through that wall-shaking 85-Watt Fender Twin Reverb, you’ll be grateful to Audient for building such flexibility into its system.

All the faculties are there to be able to easily swap out your current USB interface for the Sono. But would you? Considering a simple interface like the Focusrite Scarlett 2i2 will set you back about £100 and freeware guitar plug-ins are easily obtained, Audient’s device, clocking in at around £400, might seem somewhat extravagant.

But for multitasking guitarists and bassists who need to flesh out their ideas with vocals and the occasional harmonica overdub the Sono and Torpedo Remote are a match made in heaven. Having the ADAT optical input also means the Sono can be the nucleus of a larger, or mobile recording rig.

A recurring obstacle for recording guitarists has historically been the issue of latency, though it’s been fairly comprehensively resolved here in the high-processing power world of 2019. The Sono does boast latency-free guitar recording as a USP, with the Monitor mix option allowing you to blend the input signal with DAW playback. 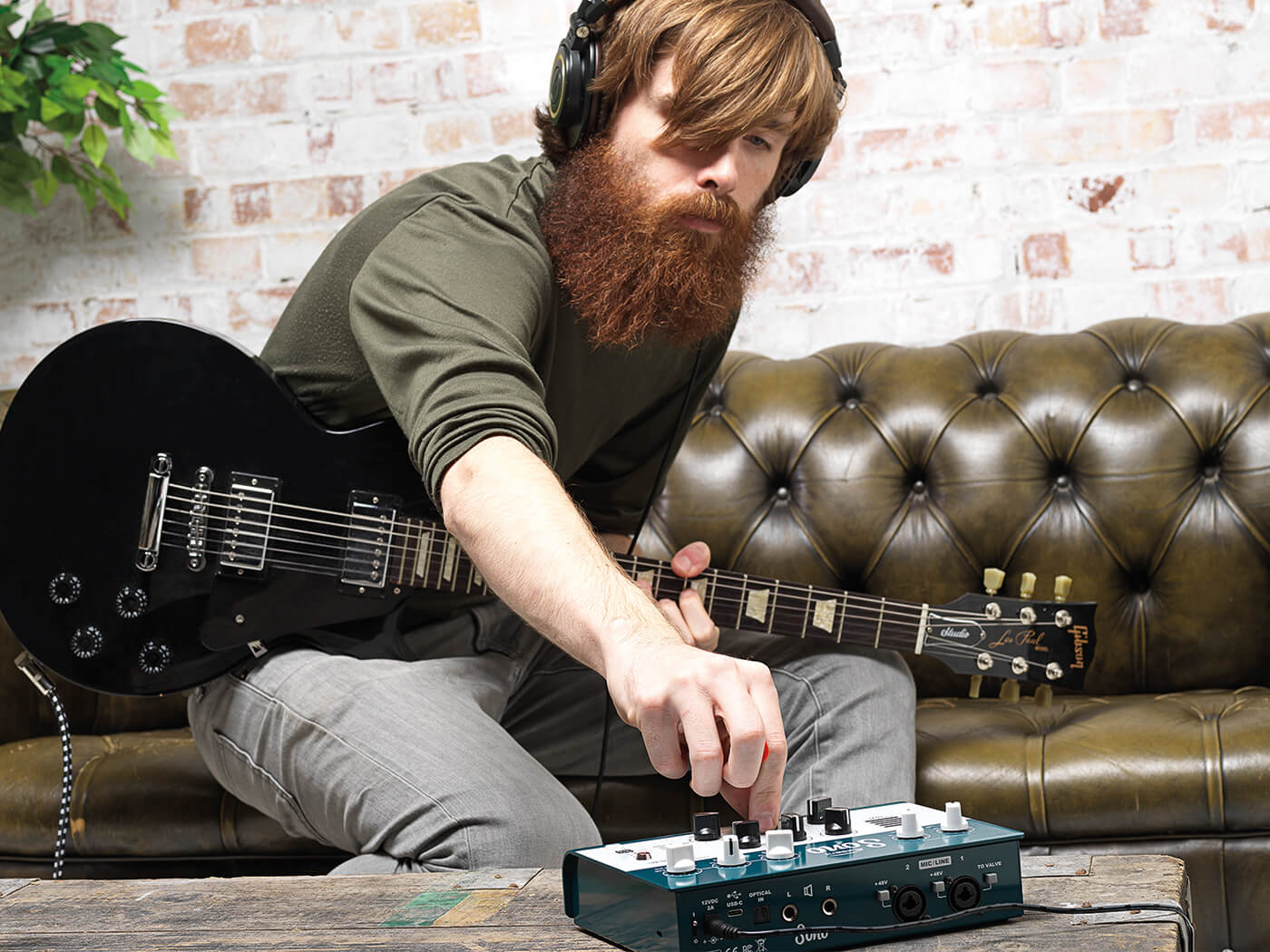 This is particularly noteworthy when you take into account the sound variation offered by the Two Notes software. The Sono is also very welcoming to additional pedals and effects in your signal chain. So the message really is that if you’re primarily a guitar player, the Sono serves as a first-class way in to the music-production world and expands the sonic flexibility of your instrument tenfold. 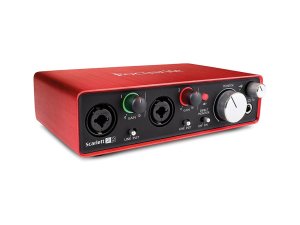 One of the world’s most popular cheap entry-level interfaces, and with very good reason. The Scarlett’s two mic preamps and low latency result in a crackingly efficient and hugely affordable studio hub.