The latest library from Hollywood sampling supremos EastWest goes truly off the wall. We get brassy with the library that trips to pop and beyond. 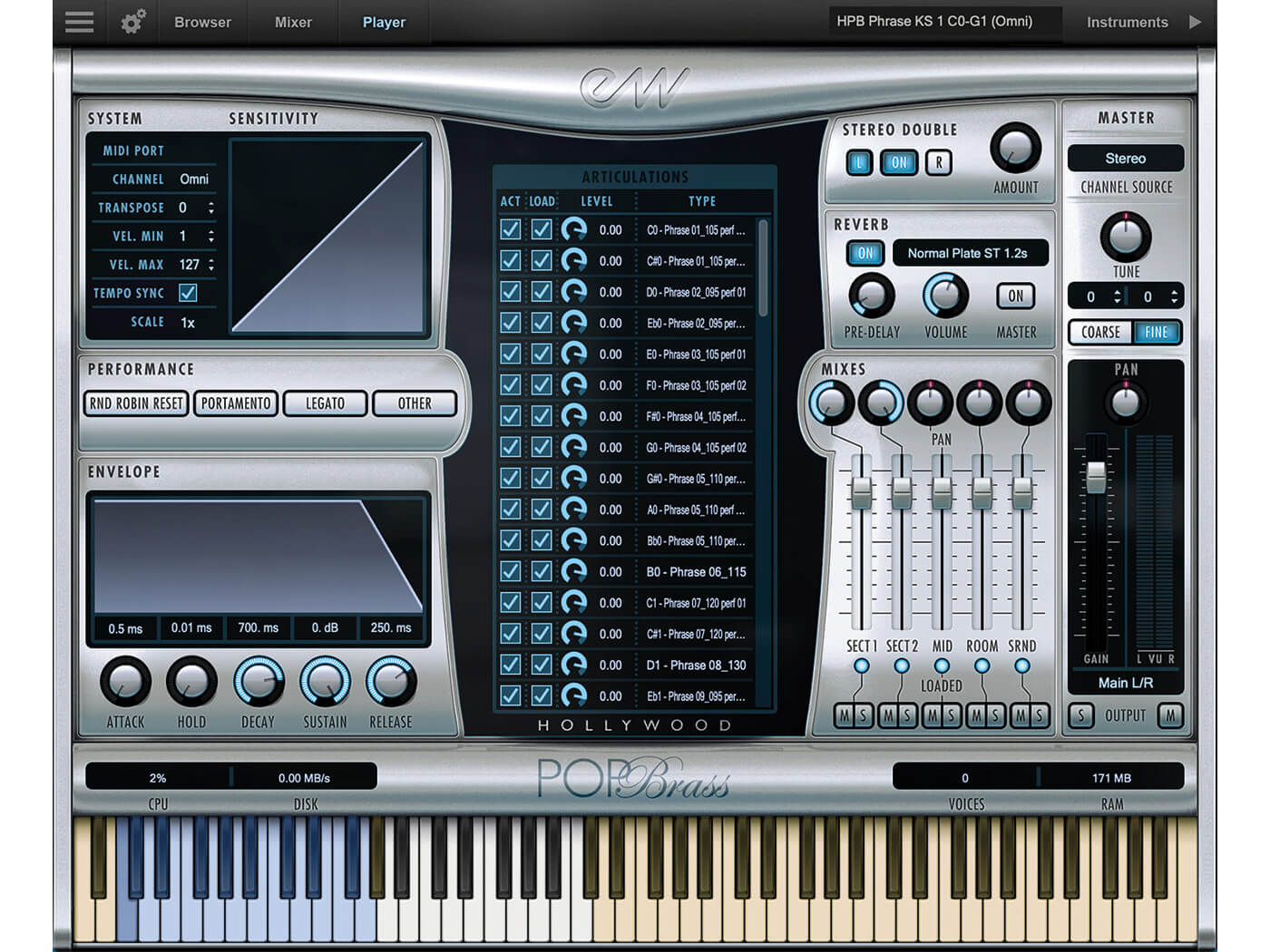 The sample library market is an area that feels like it has simply exploded in recent years, with EastWest being a key part of that charge toward high quality at sensible prices. While it has always garnered a great reputation for cinematic libraries, there have been some excellent additions of other musical styles, with the most recent being Voices Of Soul. This pack brought us a vast range of vocals ripe for soul-and-pop-based exploitation. EastWest’s latest offering could be the musical complement to this vocal library, with a vast array of horn-section stylings, perfect for a varied number of musical styles.

I’m a versatile trombone player and one that has played in a number of varied settings, which include jazz and commercial bands. I’ve also been known to arrange for brass and even to do so electronically, with a view to live session work, or making things sound convincing within the DAW. This makes the prospect of a new and comprehensive brass and horn library very appealing to me, as it’s a very difficult challenge to pull something off that really sounds convincing.

But before we go any further, it’s important to address the terminology of what we have here; the title ‘Hollywood Pop Brass’ doesn’t give us the whole picture. It’s not what you might call a conventional brass library, in the orchestral sense. It’s more akin to what many people refer to as a horn section. Within the pop world, we are firmly considering horn and brass sections used by inspirational artists such as Michael Jackson and Earth, Wind & Fire, who further inspired the use of horn sections for later artists such as Jamiroquai, Amy Winehouse and Bruno Mars. But this library also extends into the world of Latin, jazz and even 80s pop.

It’s fitting, then, that the library has been recorded at the EastWest Studio complex; Studio 1 is reputed to have one of the best brass-section recording rooms in the world, at least according to legendary engineer Bruce Swedien – and he should know, having recorded the horns for, amongst others, Michael Jackson.

Importantly, the section construct varies according to musical style and setting, between a four-piece section consisting of two trumpets, sax and trombone, or a five-piece section which employs an additional sax. The saxes alter from one patch to the next, with use of alto, tenor and baritone saxes. Once the lower baritone sax comes into play, the reference to what many regard as the original legends, Tower Of Power, comes into focus, as there is a breadth in the section which is synonymous with their musical arrangements. However, the smaller four-piece section is more akin to the unified voicings attributed to bands such as Earth, Wind & Fire.

There is a great familiarity as I start to examine the patch list; anyone who has used EastWest products before will be familiar with the layout of the reliably excellent PLAY 6 playback engine, with eight categories offering a mixture of articulations and full-on played phrases. The sustained and short articulations are assured and varied in technical specification, with options for everything from straight sustains to crescendos in varying length. 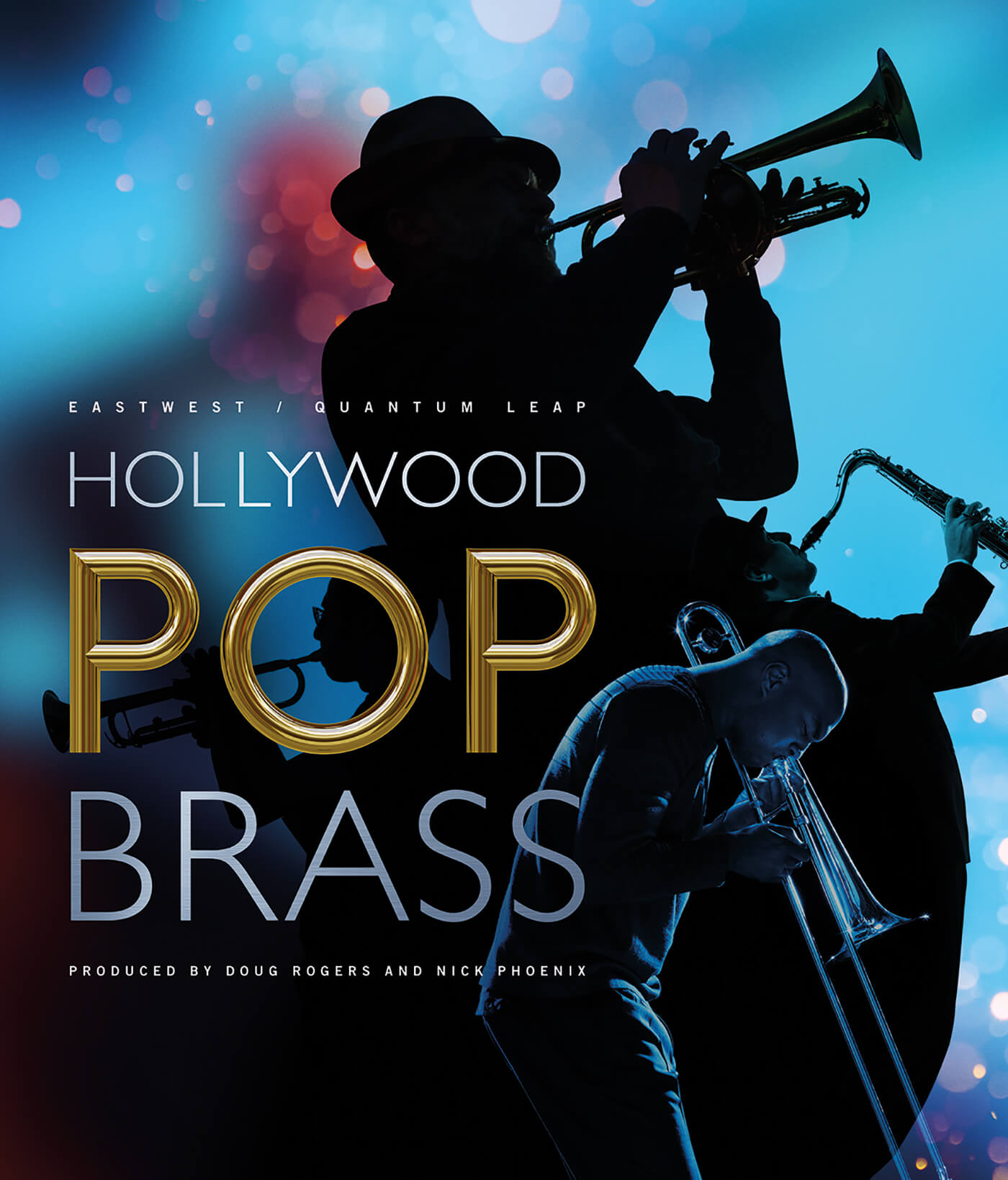 It’s important to note that horn sections rely heavily on instrumental dynamics and colour. So simply playing a loud and sustained single note will sound unbelievable and probably quite harsh, but mix up the dynamic control with the sustained X-fade patch, via the default modulation wheel and there will be instant gratification. This delivers further with the use of the crescendo patches, as the dynamic timbre brightens as it builds.

By contrast, the short articulations offer round robins, with a couple of length options for shortened and stab-like effects. There is a lack of patch that allows for key-switching between long and short notes, which is something I would have like to have seen. However, there is an excellent programmed patch which employs staccato and sustained articulations together, which is really excellent for straight-out-of-the-box usage. It’s also worthy of note that many of the patches respond really well to velocity control, alongside the previously mentioned dynamic control over MIDI CC.

I’m very impressed with the performances captured here. I’ve participated in recording sessions for commercial recordings and the demands placed on commercial players, particularly at the extremity of register and range, is no mean feat. While there is the occasional moment where tuning meanders, it feels entirely natural and firmly in keeping. Trumpets always sound a little otherworldly when playing very high and when in isolation, this will be the case. But place them in the track and it will sound truly believable. You’ll just have to imagine the picture of the trumpet players faces turning red, as they reach for the sky!

Continuing through the patch set, the legato patching is very fine indeed! There is a very natural-sounding swoop from one note to the next, with the trumpet in particular sounding very natural, whether at high volume or more modest levels. It even remains convincing while catching the odd harmonic, as it swoops up by intervals of an octave or more.

Moving to what we might regard as the pre-played elements, there’s a sizeable number of licks and phrases and it’s here the true diversity resides. There’s pop, funk, Latin and a smattering of jazz here, with clear references to Kool & The Gang, Tower Of Power, James Brown, Wham! and even the ubiquitous horn line of Uptown Funk. None of this will get you into copyright difficulties if employed, with all of these elements open to key-switching, from a single patch. Regrettably, the phrases are not open to tempo control from within the DAW, but they are available in every key.

This is a truly effective and versatile library, with an amazing sonic clarity and brightness that sounds effective and highly believable, even when solo’d. The two trumpets up top really add a colour which might not always be heard in a three-instrument section and is very welcome as a result.

I was aware of some of the short fall patches cutting off room ambience, if played too short, but it is always a necessity to program horns well, and could be fixed. It’s also worth noting that while mic channels can be separated, there is spill from one channel to the next, so it will always be best to use the section as a unit, rather than solo individual instruments. Although in the context of a track, the resulting headroom might hide any bleed.

Pop-based horn sections are not something that is essential to our instrumental arsenal. However, they can evoke a time, era and musical style (a little like a Fender Rhodes) But they’re not something you need all the time. However, if you do find yourself writing music with a slant to jazz/funk and Latin, these could doubtless be immensely useful, not least of all because Pop Brass allows for player input, alongside a fairly considerable smattering of varied phrases, which could end up saving time and money. The playing and capture is really excellent and getting players of that calibre, in a studio which sounds that good, can be very pricey. So this alone makes Pop Brass look like a bargain, even more so when factored into the ComposerCloud option, along with the wealth of other EastWest content. 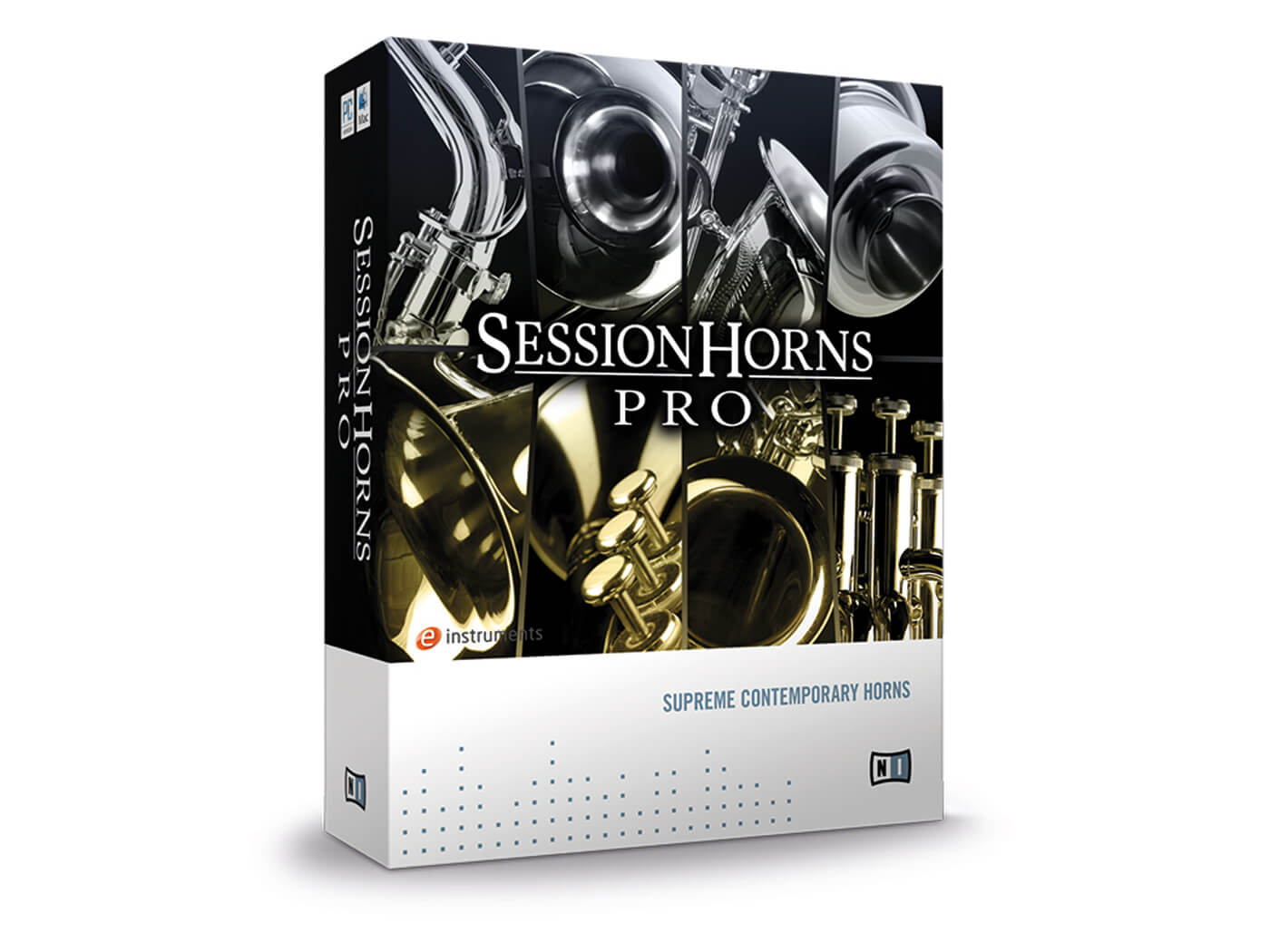 This Kontakt-based instrument from NI allows for a fair degree of customisation, presenting up to a six-piece section. There’s a comprehensive set of articulations alongside plenty of phrase-based content, with scope to make the section feel more like your own. 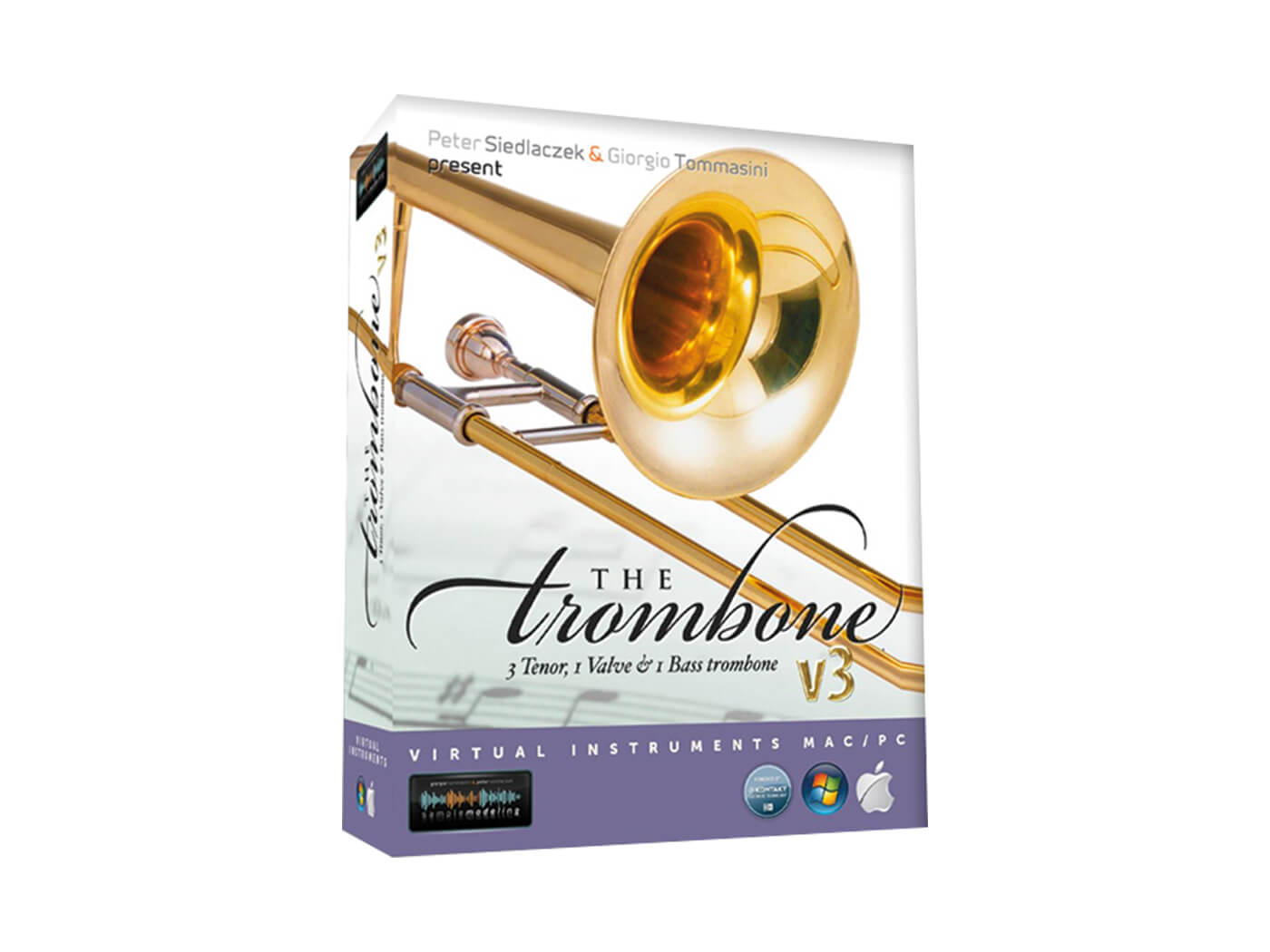 For a slightly different take on the brass/horn section and for a similar price for the two, you could opt for these two packages. They are both highly flexible and believable as acoustic facsimiles, and will work well as a pairing, offering greater flexibility for non-section and solo work.