In EastWest’s continued pursuit of inspiring sample libraries, the company’s latest addition to the catalogue brings us a female vocal library, straight from the heart. 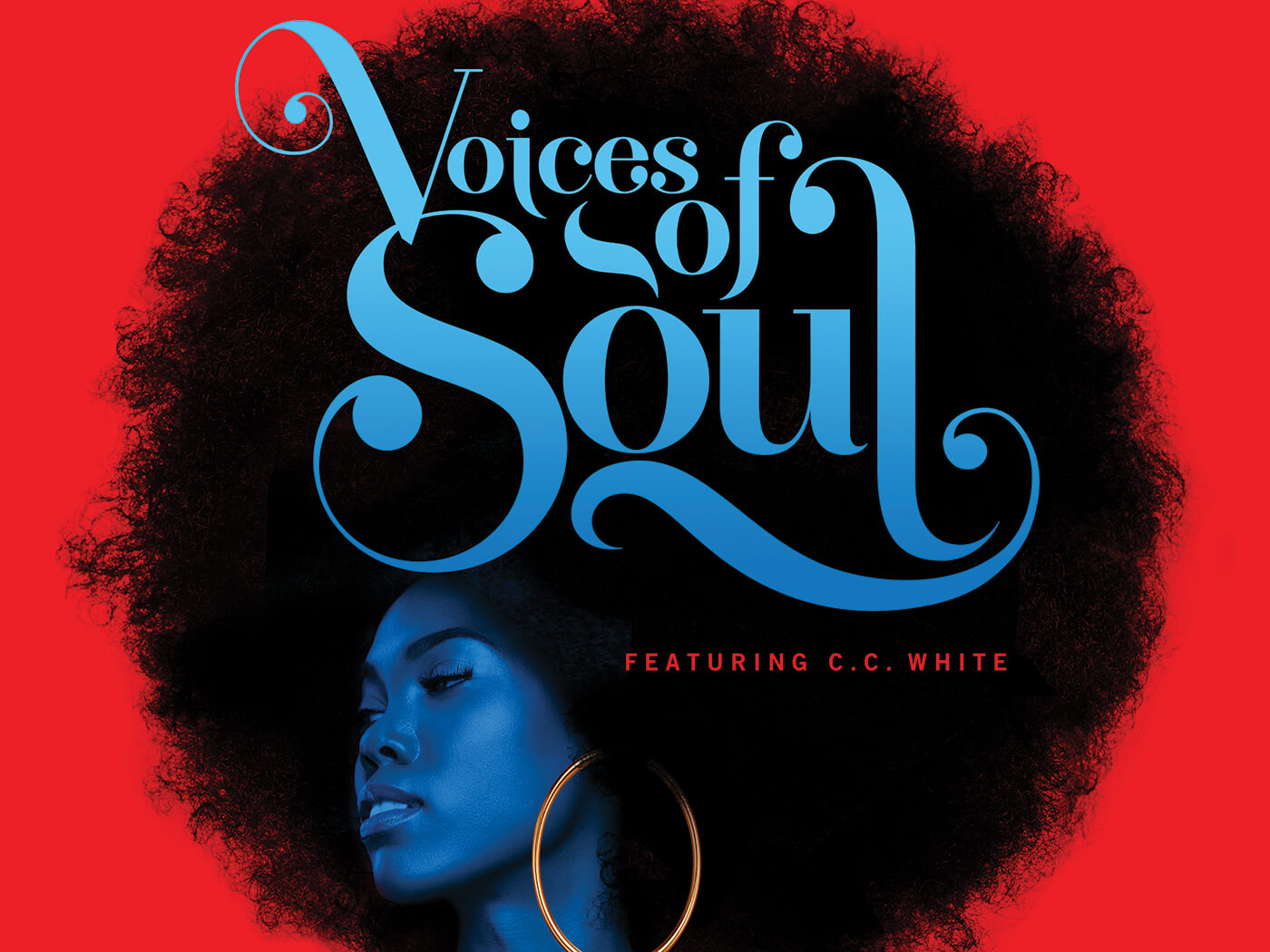 It’s not often that you hear of a vocal library with ambitions in the direction of soul music. However, EastWest has some tricks up its sleeve to entice us into its latest palette of samples. This library is centred around female soul vocals, and the origin of the samples is vocalist C.C. White. She’s an established and respected soul vocalist and delivers a fine performance.

Loading the samples via EastWest’s own Play instrument, Voices Of Soul aims to touch a number of bases, so my first port of call was the Vocal-Phrase menu. It’s here that you begin to get a feel for the beautiful dexterity of C.C. White’s voice; her lower register delivers a lovely husky quality, especially in the lower dynamic range, but when she lets rip, you can hear just a little more ambience, as she backs off the mic a tad, and the compression kicks in. 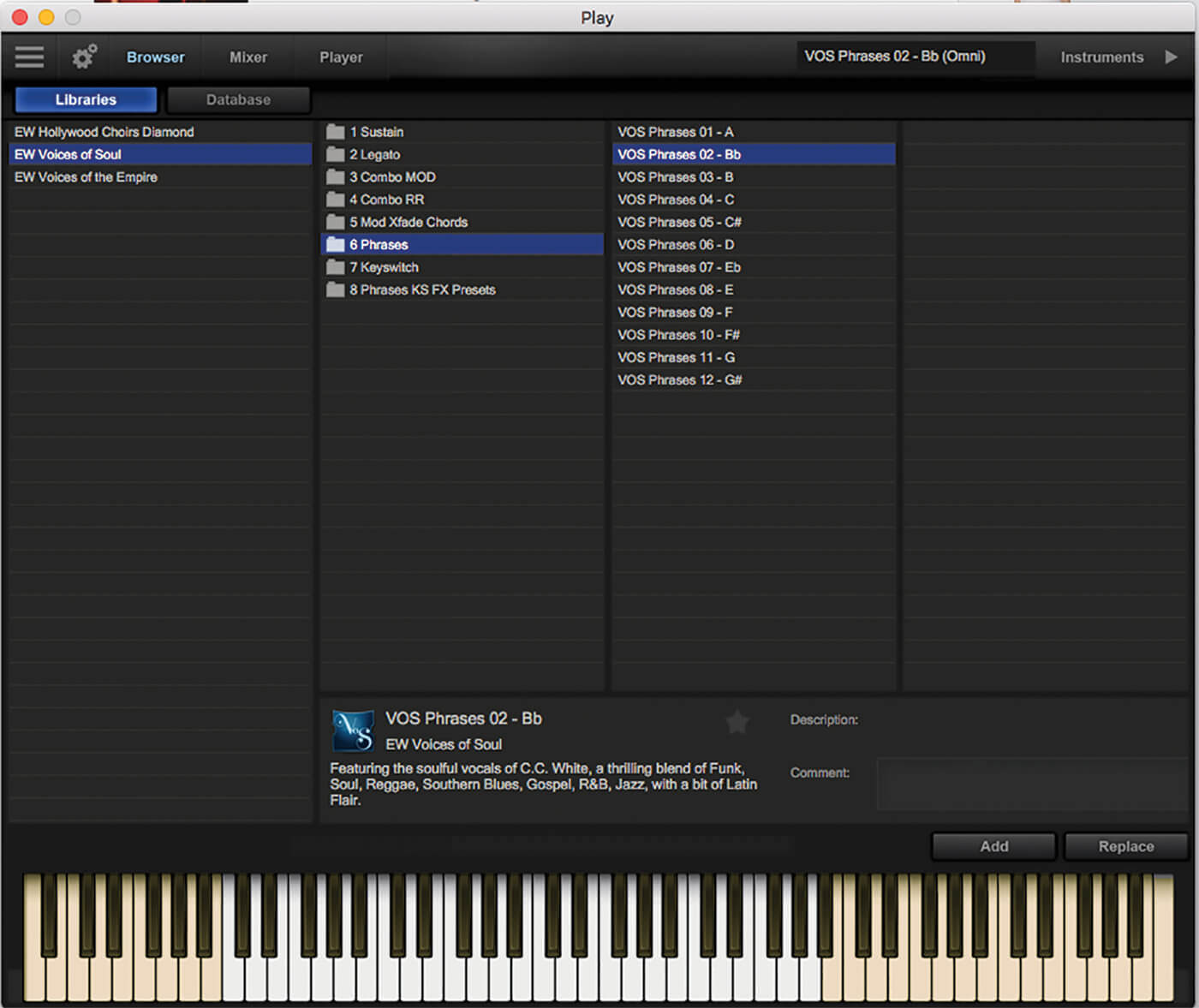 Plenty of praise for EastWest’s production here, as the comparative levels work well as you move from one phrase to the next. Moving through the different-key note patches in the Phrase menu, there is no correlation of sample assignment from one to the next, so the same phrase is not repeated in every key. In many respects, this offers a greater variety, but with my producer’s hat on, it might have been useful to have some repetition, allowing full use of all vocal phrases in all keys.

That aside, I found some of the most useful samples to be the single notes that just change over time, developing into a heavy vibrato, as the sample elapses. It sounds beautiful and natural, exactly as a soul singer should. In this context, the mod wheel (CC 1) will switch from longer to shorter samples, making for even greater choice and diversity.

Switching back to the menu, the Sustain patches piqued my attention; realistic vocal sounds, such as this, can come in very handy for shoring up backing-vocal elements. There’s a pretty substantial choice of single-syllable instruments, with options from full-on Ahs to more discreet Mms.

When placed in a triad, these sound very convincing, as the recorded vibrato creeps in with each sustained note. There are subtle and natural breaks in C.C.’s voice, meaning that as you vary the register of playback, you hear a slight change in tonal colour, which makes it sound even more natural and human. 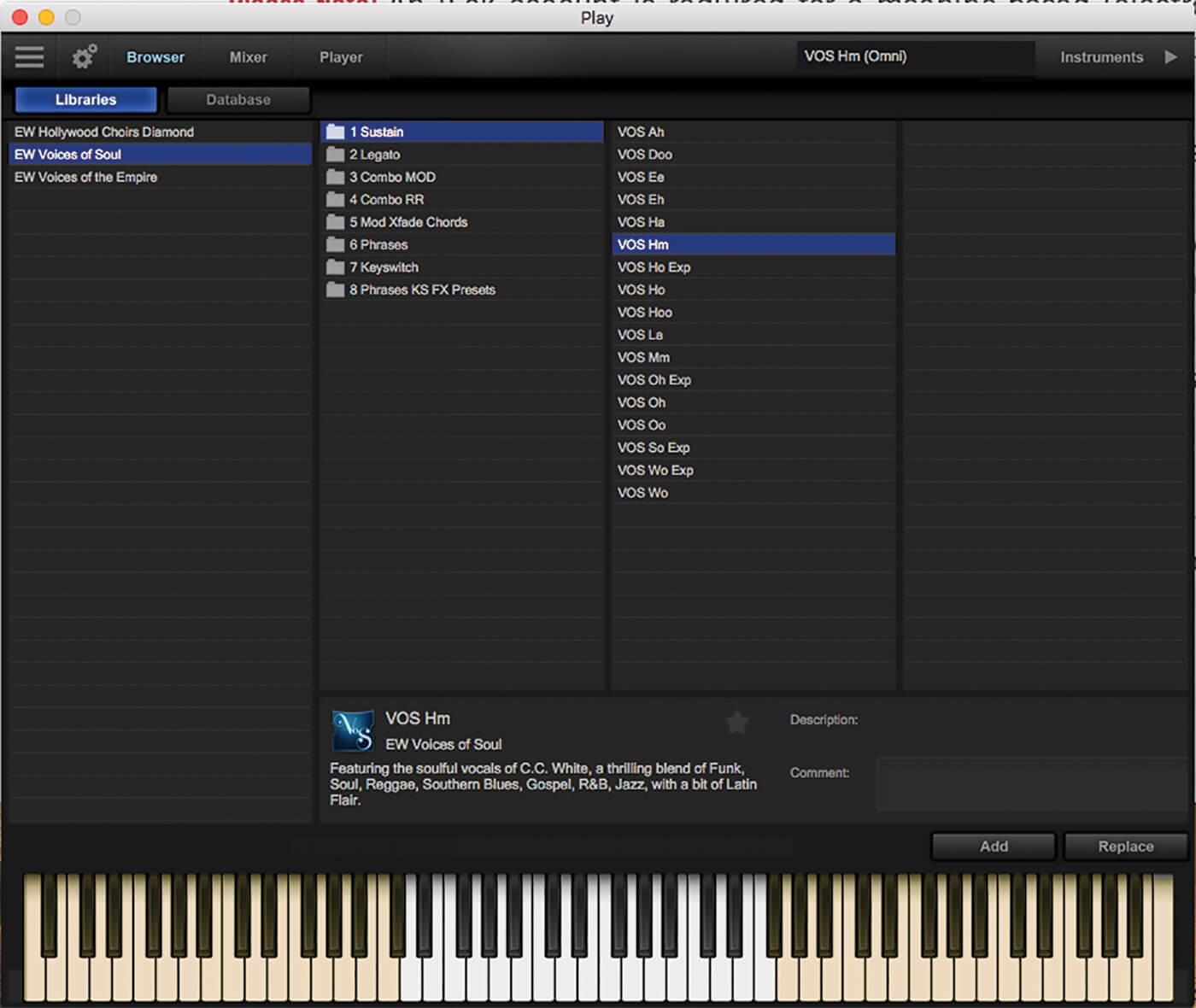 While in use, triggering was tight for the vast majority of samples, but I did come across the odd note where the start seemed delayed, and upon further scrutiny, found this occurred very occasionally on samples with some form of consonant, at the front, such as on the La or So articulations. In use, this can be fixed with a little DAW-based note movement.

Away from this very minor gripe, stacking these vocal sounds is immensely satisfying and effective. It’s worth mentioning that, in keeping with the soul roots, there’s a lot of swooping at the front of each note, normally from a semitone or so below the triggered pitch. The swoops are not always present, being mainly attributed to the upper/louder layer of velocity triggering, as well as the upper-pitch register.

The entire range of available pitches covers D2 up to F4, giving just over two octaves of playable area. Where the swoops begin is also patch-dependent, with most appearing around the middle of the vocal register upward. By its very nature, this is part of the character of soul music. It might not be for all, but It does fit with the package’s calling card and stylistic persuasion.

Legato patching is available to Oh and Ah syllables, with three further options for the switching of syllable during playback, via use of the mod wheel. Loading the basic Ah patch, it becomes clear that this is a big ask technically, as it doesn’t feel entirely convincing. Triggering the first note in a phrase reproduces something similar, or even the same, as the sustained patches, and it is the further legato triggering of samples that is less effective.

This is likely down to the nature of the performance; subsequent samples seem to trigger at a point where the vocal vibrato is already in play, and with this comes a slight switch in vibrato style as you move seamlessly from one note to the next. Vocal lines within this genre are organic, free and very stylised, and presenting this in a playable format is always going to be a challenge. My advice for usage would be more about trying to use notes in pairs, rather than entire legato phrases. With each clean non-legato retrigger, it sounds far more believable.

One area I did find entirely convincing was the Cross-fade Chords patching, where syllables can be opened up via the mod wheel. This sounds terrific in a chordal context, as suggested by the patch menu, and threw open that organic sense of a singer opening up, at full tilt.

Voices Of Soul is genre specific, as you’d expect, although many of its vocals could be used in other styles of music, too, as EastWest demos on its site. Of the sample types, the collection of phrases offers the most potential for natural-sounding vocals, and is good to go without the need to worry about abstract narrative phrases. 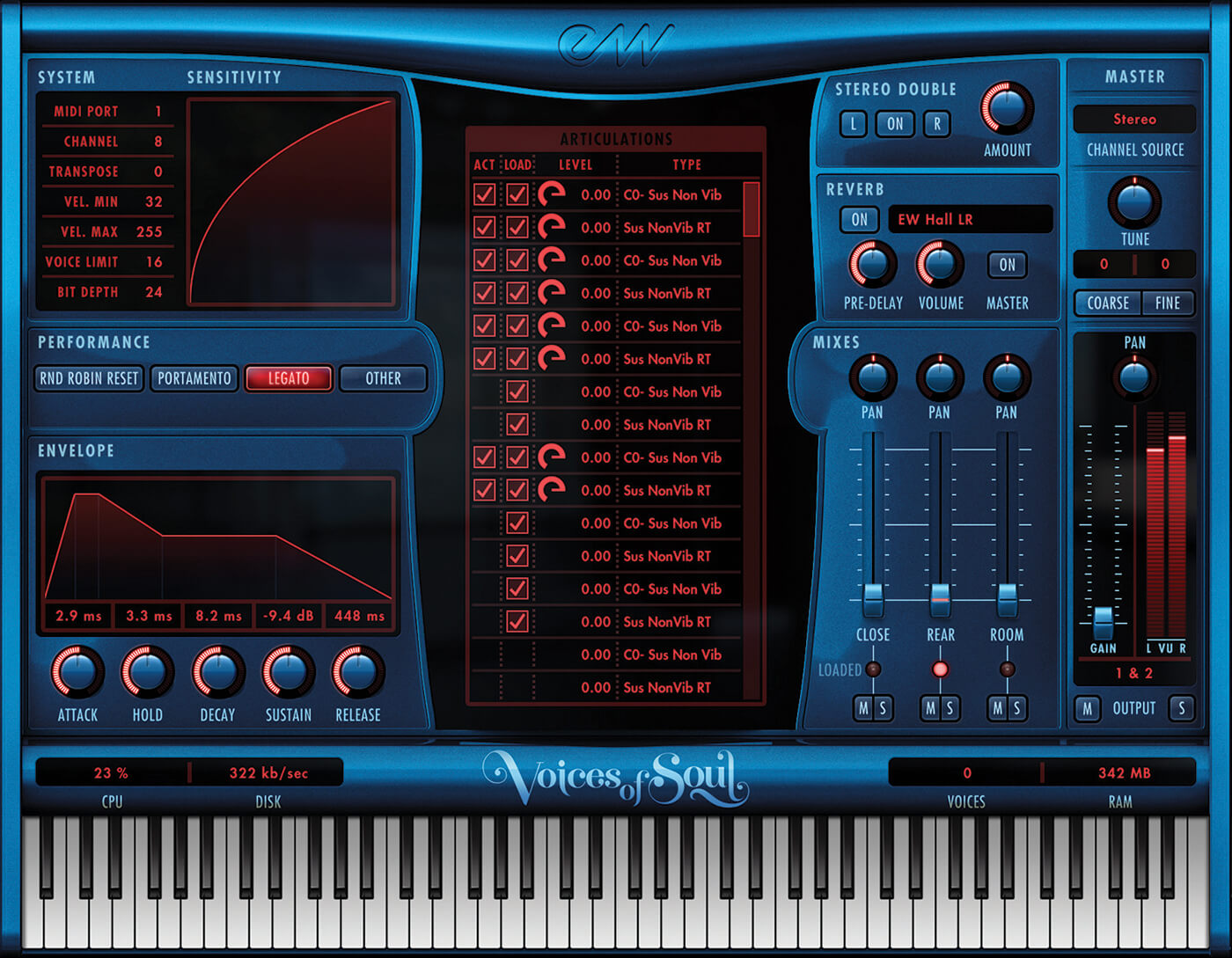 The sustained elements sound terrific when stacked, and highly convincing too, particularly in context. High praise has to go to EastWest for the production side of both the three mic levels and the Play-based reverb, which all sound excellent. I’m less sold on the legato patches, but with work, there’s no reason why these can’t sound pretty believable, and there are plenty of other elements here to tempt you in.

If you find yourself constantly reaching for vocal samples as phrases or for creating more convincing BV-based patches, this is a package that is definitely worth a look, particularly as it is highly convincing in all of these areas. As with just about all EastWest titles, it’s available as part of the ComposerCloud, meaning that it’s just a download away from being on your machine and in use.

Whether one might choose to purchase Voices Of Soul is obviously entirely based upon how often you need the soul-stylised vocals. There are, of course, crossovers from this genre to other areas of music, but it does convincingly tick the soul box, both in terms of phrase and vocal content, and in terms of its overall sonic colour. There is quite a drought for these sorts of libraries, though, so my feeling is that it will occupy this space pretty well.