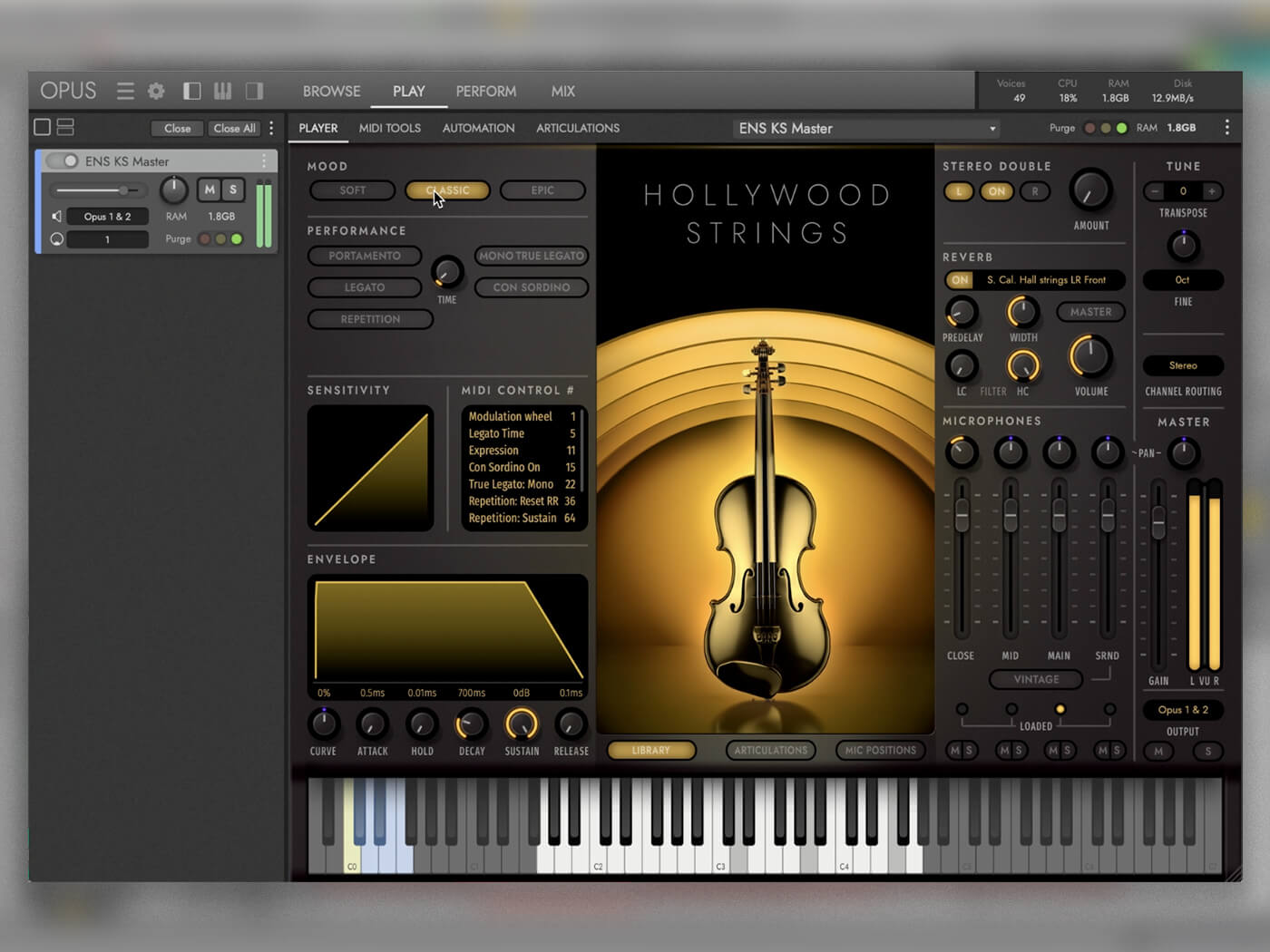 ⊕ Improved sound quality across the board
⊕ Optimised performance
⊕ Greatly improved storage management options
⊕ A host of tweaks and improvements to speed up your workflow
⊕ The Orchestrator plug-in: a powerful new tool for beginners and experts alike

With Opus, EastWest brings a host of welcome improvements to its expansive orchestral library. Whether you're a long-time user or a first-time buyer, there is much here to get excited about.

Hollywood Orchestra is easily one of the most-used sample libraries in the world. Through the accessibility and popularity of EastWest‘s subscription service, Composer Cloud X, the company has brought a massive selection of high-quality instruments to creators who previously would have been priced out of the market. In turn, Hollywood Orchestra has grown a large, dedicated user base.

This is why it’s all the more pleasing that EastWest has resisted the urge to rest on its laurels. Instead, it has just released a hefty update to its flagship library, a completely new software engine to power it, and a new orchestration tool that is sure to both divide and delight music makers.

With the Opus edition, EastWest has added over 130 GB of newly recorded content and wholly overhauled the older samples through remixing and reprogramming.

In terms of new content, first up is the strings. The new ’18 violins’ patch has a beautiful, rich unison sound and the legato patches, in particular, feel like a considerable improvement over the previous version. A special highlight is the addition of some extended string techniques, such as col legno battuto, labelled in the library as ‘Penderecki’ in honour of the composer who made the sound famous.

The old brass section was always a strong selling point for Hollywood Orchestra, and the new ‘2 trombones’ patch is similarly excellent. The dynamic layers feel highly realistic, letting you easily create beautiful crescendos. There is also a ‘2 trumpets’ patch to play with, and here EastWest seems to have seriously increased the dynamic range, letting the trumpets get up to that bright, brassy timbre that can cut right through an orchestral texture.

Previously, the woodwinds section was an undeniable weakness in the Hollywood Orchestra library. A great deal of work has gone into rectifying this and, across the entire Opus edition, it’s in the woodwinds that you’ll hear the biggest improvements.

The sound quality is undeniably better and, crucially, there are now woodwind ensemble patches – a notable omission from the old edition. These new ensembles, consisting of three flutes, three clarinets, and three bassoons, bring EastWest much closer to the competition’s sound quality. Once again, the new legato mode makes the whole section feel much more satisfying to play.

Lastly, a new ensemble patch gives you a great cross-section of the orchestra and is perfect for making a quick sketch of your score.

Great as the new and updated recordings are, the Opus player is the real drawcard here. EastWest has listened closely to its user base and come to the table with lots of crowd-pleasing improvements, including optimised performance, a streamlined workflow and some time-saving performance tools.

Stand out tweaks and additions include the new quick-load setting that lets you conserve RAM by loading samples from your hard drive into memory as you play. Then there’s the ability to detach the player window (great for multi-monitor setups) or the new description panel that details how to get the maximum expression from each instrument.

Now, any instrument patch from across the entire EastWest library can be instantly demoed and individually downloaded. Gone are the days when you had to wait for a whole collection to download so that you could access the single flute patch you needed. It’s perhaps not as exciting as some of the other updates, but it’s just so damn useful that it might be my favourite thing about Opus.

The players new UI is sleek and intuitive yet pleasingly familiar. Essential sections like reverb, performance and envelope are still in roughly the same locations, but there are a few new and notable appearances.

Opus introduces the Mood buttons, which are available on the Diamond Edition or Composer Cloud Plus versions of the library. Titled Classic, Soft, and Epic, each mood button will rebalance the microphone blend, tweak the reverb settings, and add an appropriate performance technique to whatever instrument you have loaded. However, that’s not all. According to EastWest, the Mood buttons also tweak the velocity layers, favouring samples that fit the overall vibe.

While the Mood buttons allow you to make big, broad sonic changes with a single click, Opus simultaneously offers a good deal of versatility for those who like to get under the hood and customise things.

When it comes to essentials like keyswitching, you have unrestricted access to set any note you like for changing articulations. There are also options for controlling keyswitches via MIDI controller or even velocity. There’s a new MIDI Control panel in the main player window, and this makes reconfiguring controller assignments for performance techniques and dynamics a breeze. Clicking on the Automation tab brings up a macro section allowing you to easily control multiple parameters, each with custom scaling, from one slider.

Lastly, the mixer tab now features a greatly expanded list of plug-ins to play with, adding effects like distortion and flangers to more usual fare like compressors and EQs when blending your instruments.

Included in the Opus Edition of Hollywood Orchestra is the Orchestrator plug-in – a genius piece of software that is sure to become many a producers’ guilty pleasure.

Orchestrator pulls together all the instruments available in the Hollywood Orchestra and distils them into ready-made arrangements in various classic film scoring styles. Load up a score preset, hold down a chord, and a full, rich orchestral texture greets you. The plug-in automatically selects the optimal voicings for up to 16 instruments across the orchestral sections. It selects articulations to evoke a specific cinematic style and pairs this with rhythmic ostinatos to complete the picture.

For people with little or no background in orchestral writing, it’s now possible to get something that sounds awfully close to a standard Hollywood film score by simply pressing a few notes. Of course, on the flip side, the danger of churning out tired and cliché orchestral tropes has never been greater.

However, thankfully, this tool is not just a get-out-of-jail-free card for first-year music students. Once you move past the flashy presets, the Orchestrator plug-in is a genuinely powerful musical tool and a huge time saver – even if you were only to use it for quickly loading up and trialling different instrumental ensembles.

If you already have a Composer Cloud subscription, then Christmas has come very early indeed – the new Opus engine eclipses the old Play engine in every way. The new library content is excellent, and the orchestra’s sound feels much more impressive.

Similarly, if you are currently considering investing in an orchestral library, there has never been a better time to jump into the EastWest ecosystem. However, if you’ve already purchased the previous library outright, the question is a little trickier. The sounds are better, yes, but the real star of the show is the fantastic new Opus engine – and is that worth the upgrade cost of $495 from Hollywood Orchestra Diamond and $395 from Gold? Probably not.

Nevertheless, with Opus, EastWest has struck a delicate balance between pro-user customisation options and speedy ‘it just sounds good’ tools like Moods and Orchestrator. All the minor tweaks and improvements cumulatively result in a streamlined user experience and a big step forward in the usability of the entire EastWest collection.