Looking for organic, orchestrally-sourced sounds to sequence into underscores for media composition? Then Sequis is for you. 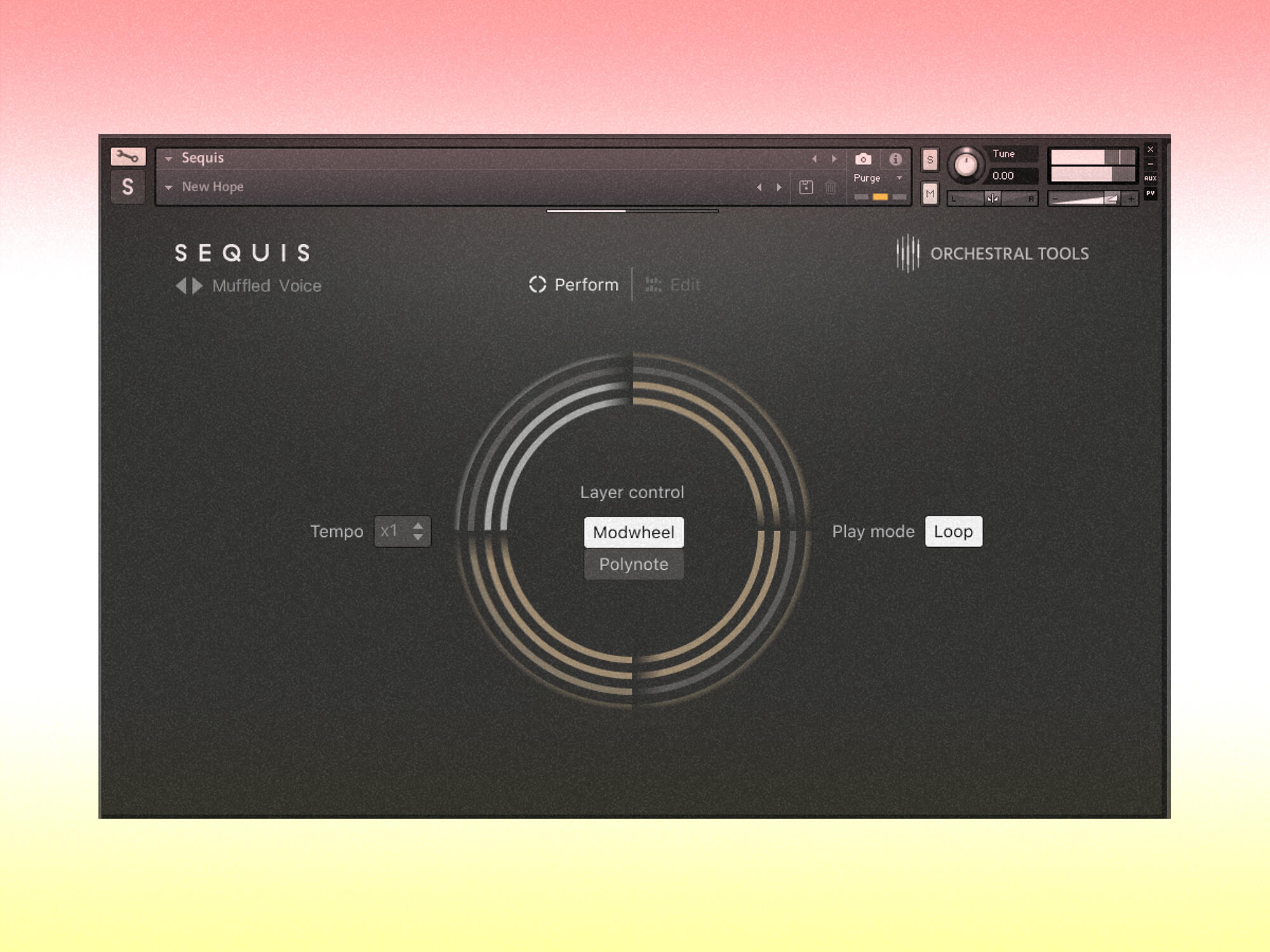 Quick to program and consistently beautiful sounding, Sequis deserves your attention, particularly if you’re looking to add natural pulses to your media compositions, thanks to its compelling library of organic tones.

Sequencing, as a word and compositional concept, has been with us for longer than you might think. We tend to think about sequences as being looping, repeating collections of MIDI notes which cycle and repeat. But the appeal of repetitive phrases pre-dates the earliest pattern sequencers and perhaps established itself most as a valid form of composition during the 1960s, pioneered by minimalist composers like Steve Reich. Many modern film and TV composers would cite his approaches as inspirational, due to the fact that pulsing, multi-timbral sequences are a great way to inject ‘pace’ into a music cue.

Writing pointed, short-note phrases, with polyrhythmic patterns composed for several instruments at once, can produce anything from thrilling action/tension underscores, to gently evolving, undulating sequences and everything in between.

Sequis is a Kontakt-hosted instrument made in partnership between Orchestral Tools and Native Instruments which celebrates exactly this approach to pattern sequencing. Offering an intuitive interface which lets you program steps for four instruments simultaneously and featuring a wide selection of samples across multiple instrumental and vocal groups, it aims to let you configure and rapidly build organic, orchestral sequences. Is this novelty or a media composer’s new secret weapon? 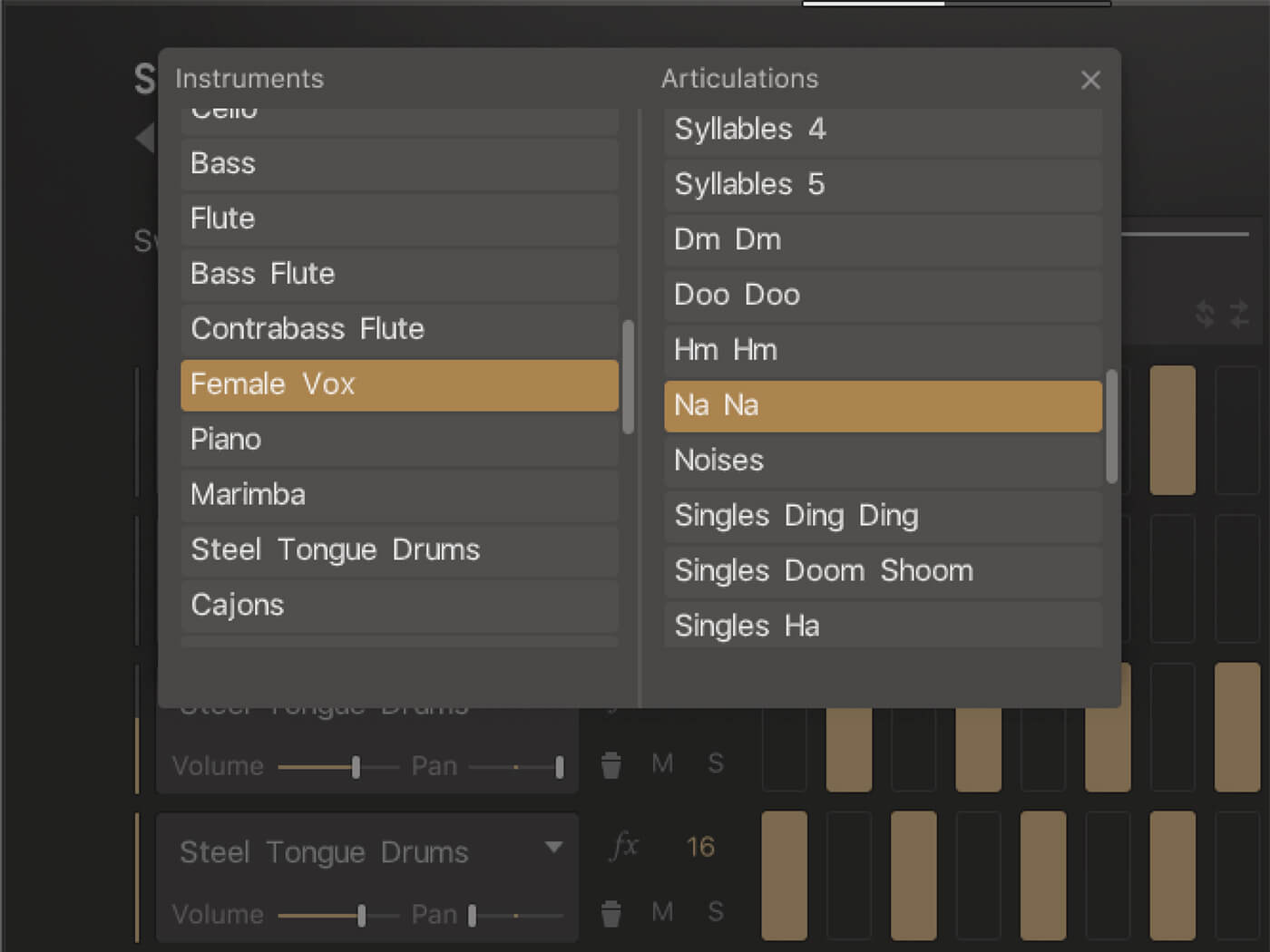 Each Sequis patch is a combination of up to four instruments, each of which can play its own pattern. The notes of this pattern are dictated by the notes you play on your keyboard, so the pattern is a rhythmic one in essence, which is translated to whichever notes you play to trigger it.

On the main page, under the ‘Perform label’, two modes dictate how the four layers of sound are added. In ‘Modwheel Mode’, volume is introduced to each layer as the Mod Wheel value is increased, so all four layers only play at full volume when the Mod wheel reaches 127. When it’s at 0, only the first layer of sound plays. In Polynote Mode, each new layer is added with each key press, so the first note you play will trigger sound/pattern 1, the second sound/pattern 2 and so on.

The interface is designed beautifully, as you can see all four ‘cells’ of a pattern which oscillate in a clockwise direction, as well as seeing the rings of the circle, which show how many of the sound layers are currently active. As you increase the Mod Wheel or play more notes, more rings light up. 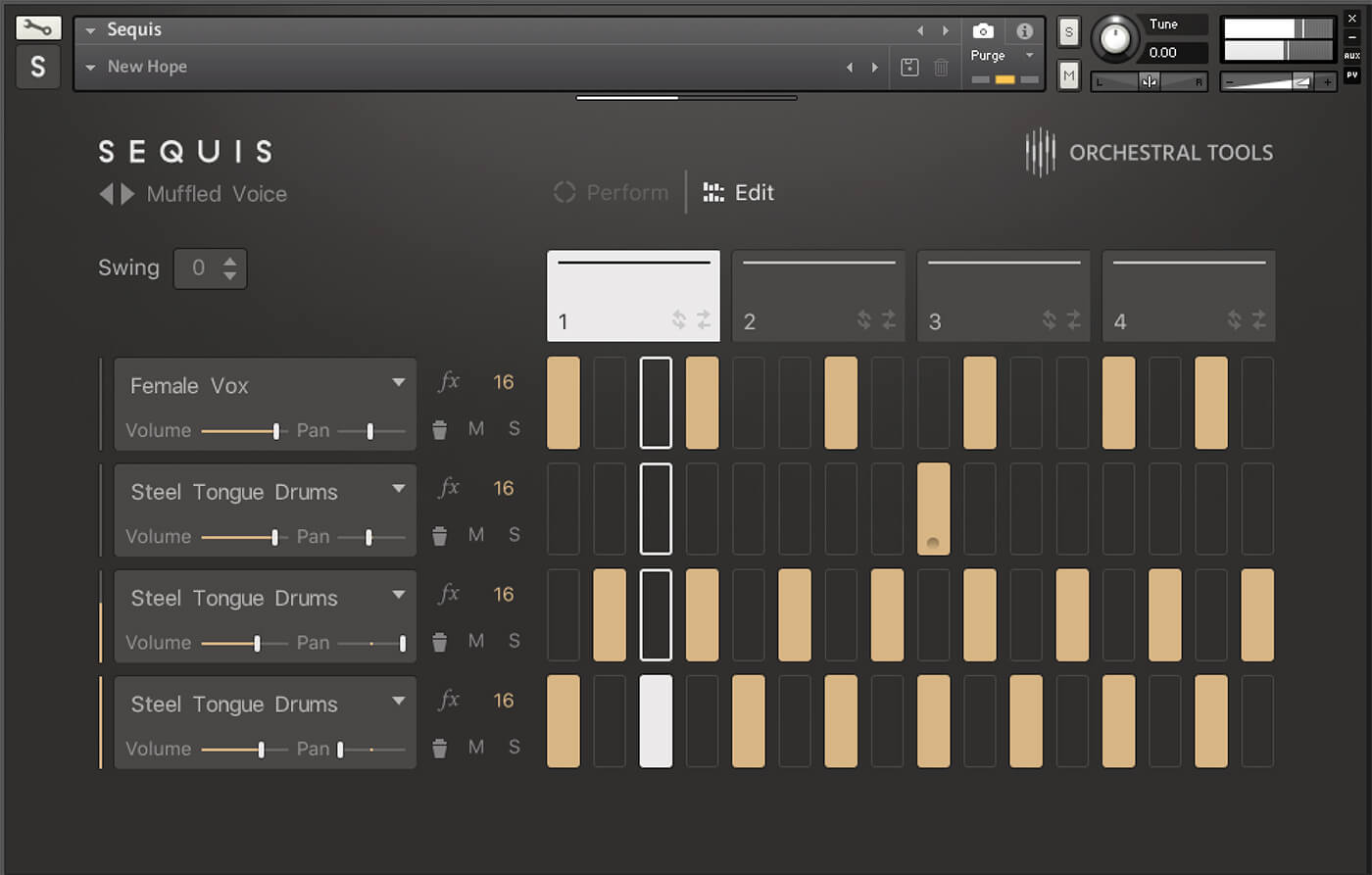 Sequis offers more than 400 presets but one its main strengths is its simplicity. Despite its complex sonic capabilities, at the heart of its library is an extremely straightforward approach. A quick press of the Edit button will help you both understand this and then rapidly build your own sequences.

Firstly, you can choose a sound for each of the four layers. These are organised into Instrument and Articulation categories and both columns of options are generous. Instrument-wise, you’ll find Nylon and Steel Guitars, as well as a Dobro and a Banjo. Strings are represented by Viola, Cello and Bass options, while Flutes, Bass Flutes and Contrabass Flutes comprise Woodwinds.

Within each Instrument group, the list of articulations is comprehensive and inspiring. Trills, hits, ricochets, echoes, soft mallets, plucks, brushes, falls, harmonics… We can easily exhaust this review’s entire word count by simply listing the options for each instrument group.

Sequences are created by adding data to the lanes for each instrument to the right, with four lots of 16th notes the default, meaning that each pattern lasts for all four beats of a 4/4 bar. However, if you’re working in 3/4, you can easily switch the patterns off for one beat. Independently, each numbered beat can also be triggered to play both forwards and backwards, or to cycle if you prefer, which is where your sequences can become very sophisticated very quickly.

Double-clicking a note ‘emphasises’ it, giving it increased volume to accent that step in a pattern. Patterns can also be solo’d or muted per instrument, and you can scrap a sequence by clicking the Trash can icon in each lane. Each pattern can also be switched from regular 16th notes to triplet 16ths too.

The ‘fx’ button launches auxiliary effects to be accessed on a per-sound basis. The effects offered are a Filter, with simultaneous Low and High-Pass modes with Emphasis controls, a clickable Delay with Damping, Feedback and Mix controls, as well as a Reverb with Pre-Delay, Size, Damping and Mix balance dials. Back on the Perform page, you can decide whether your sequence will play back at normal speed, clocked to your DAW’s tempo, at double-speed or at half-speed. 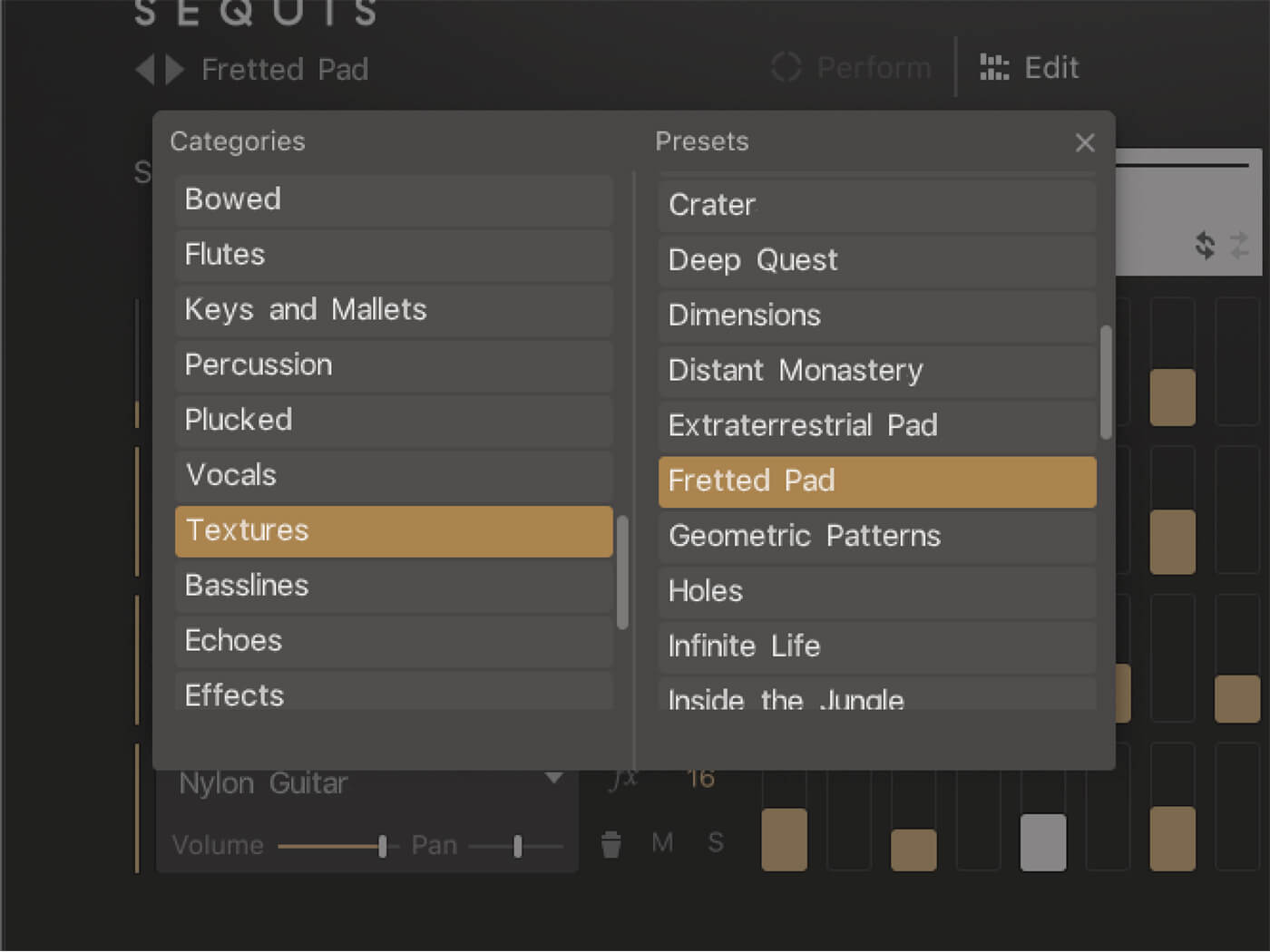 It would be easy to dismiss Sequis as an ideas machine – good for rough and ready sequences, but ultimately a slightly one-trick gimmick. Nothing can be further from the truth. The keys to its success are the abundance of instruments and articulations, and the quality of the recordings, most of which have been made from scratch by Orchestral Tools for this project and the rest borrowed from its high-quality orchestral libraries. Couple that with a simple-to-use yet deceptively sophisticated sequencer, and Sequis’ capabilities rapidly multiply.

Yes, there could be some tasteful synth tones (like the synth sounds in Spitfire Audio’s otherwise piano-based Stratus) and yes, a pattern sequencer with more than 16 steps per instrument and lanes offering per-step filter or effects data would also provide greater flexibility. We would also like a broader collection of wind sounds, such as oboes and clarinets in particular.

In some ways, Sequis is a victim of its own success – you’ll find you become greedy and want even more of what it does so well. But I can’t think of another library which steadfastly sticks to real, recorded sounds and offers them for sequencing and arranging in quite this way. The results are beautiful and, to answer our own question: yes, Sequis could very well become a secret weapon for many media composers.