Frank Dukes’ and Cradle’s self-contained synth/keys module has been curated from Frank’s studio collection and promises creativity, simplicity and bags of texture. 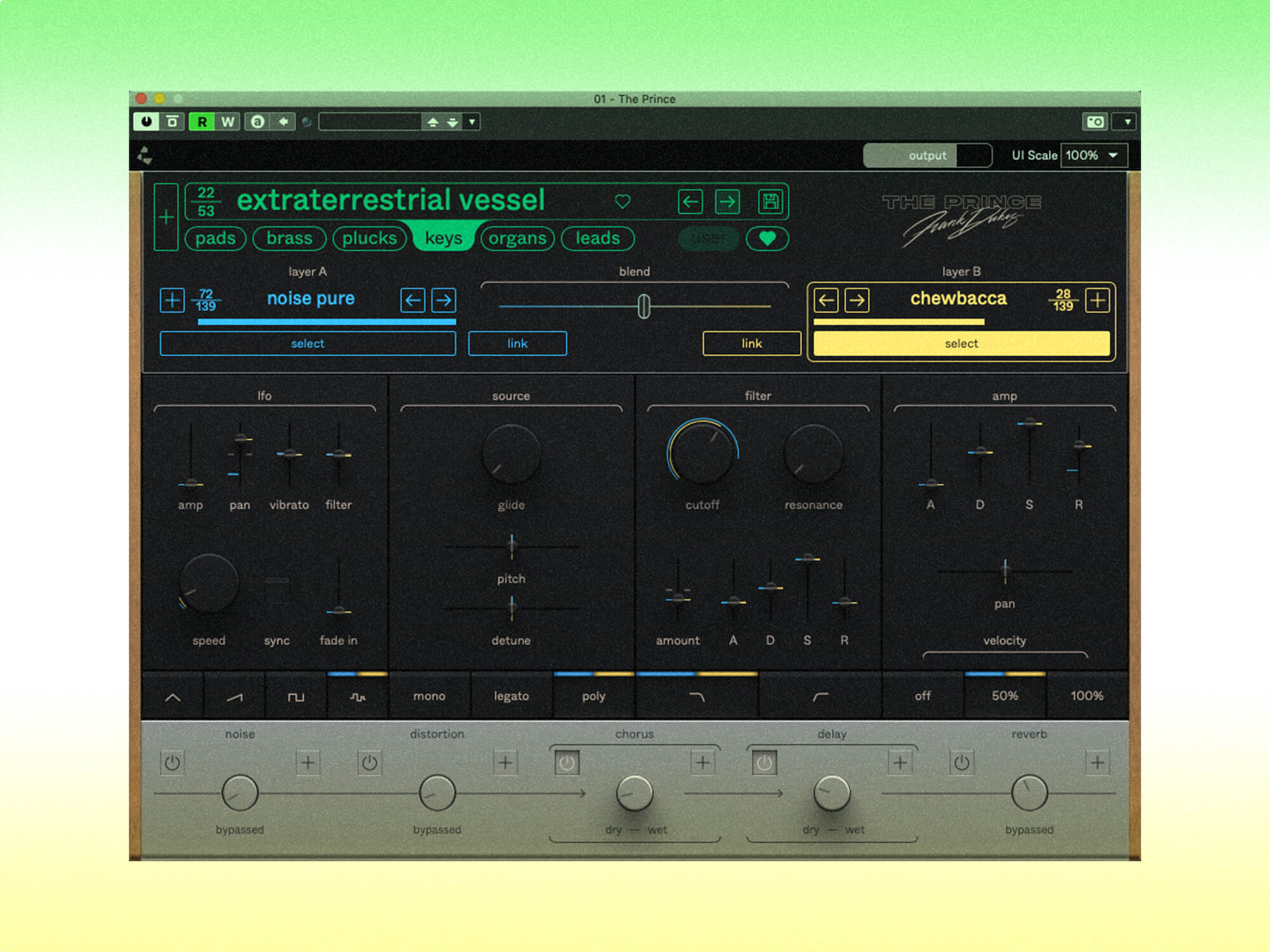 The combined product of the Frank Dukes and Cradle collaboration successfully balances an efficient interface with distinctive sound sources to produce an engaging, refreshing and original instrument.


Cradle’s first product, The Prince, is a confident stride into the virtual instrument and plug-in world. Carrying Frank Dukes’ signature will no doubt open doors for this debut, given the artist’s prestigious songwriting and production credits. The Prince is a dual layer synth drawing on a root library of over 130 samples, which you can shape via a linkable set of controls presented in an attractively understated interface.

The only breaks from the main interface come from the drop down preset menu list at the top and the expanded parameter set for the five effects at the bottom.

This is a curated instrument rather than an all-flavour one-stop shop, with an emphasis on immediately evocative sounds accompanied by easily accessible tone shaping essentials.

The playful preset names, such as Magnetic Folklore, Jittery Dealer and Nervous Cousin, mesh well with the easy playability of The Prince. The instrument will not bestow Frank Dukes’ artistic sense or fame, but it does bring an aesthetic to what you play and, to a degree, how you play it.

There’s no vanilla here. The initalised patch can be used as a clean slate, but there is a textural focus which leans into the wobbly and fuzzy whilst also providing plenty of crispness and rasp for upfront leads, synth brass, and keys. The six preset categories, aside from User, are Pads, Brass, Plucks, Keys, Organs and Leads. Sure, there is no Bass, but then, much like leads, anything can resemble a bass when you play the low keys. Cradle’s intention with The Prince is to aid the artistic process by tapping straight into expressive sounds that can quickly generate and develop melodic, harmonic and chordal ideas. The impressive, if idiosyncratic, preset list can satisfy many needs with little adjustment, and the quality of the tool set offered by the interface is fundamental in personalising the output.

Below the preset section are two layer control sets that surround a Blend slider for balancing these sample-based sources. The drop-down source menus that sit above Select and Link/Unlink controls dictate how the parameters beneath behave. In linked mode, moving any slider or dial will change the parameters for both layers, including any pre-existing offset. These parameters feature colour-coded value markers with reference to the two layers. The layer Select buttons are used in the unlinked mode to determine which layer’s parameters are to be adjusted.

The controls are laid out clearly and show data values when hovered over, though there is no way to input a numeric value. However, you can right-click while adjusting the parameters for finer adjustments.

The interface is split into four sections: LFO, Source, Filter and Amp. These are not overloaded with options and, though we may be used to multiple filter slopes and LFOs, the simplicity is refreshing, with none of the regular frills being necessary. There is a great deal of range available for radically shaping the blended layers to form focussed patches as well as more complex and chaotic ones.

Unlike many virtual instruments, The Prince does not have a dedicated MIDI mapping scheme, and no role for a Mod Wheel and a fixed pitch wheel shift of ±2 semitones. Most DAWs have remote control mappings for plug-ins and instruments so this isn’t a real problem, and one could argue that it is simpler to keep this external as single parameters may need two addresses when used in the unlinked mode.

For this review, The Prince was loaded into Nuendo. A MIDI remote control map took little time to establish, though often we found that track-based automation was more useful. The LFOs have four shapes – triangle, saw, square and random/S&H – with sync and fade-in functions. The four destinations – amp, pan, vibrato and filter cutoff – are set by sliders, the latter three of which run up to 100 per cent. There is a good deal of wobble, and warp on tap before the chorus effect is necessary.

The Source controls cover glide, coarse pitch and detune. Once again, try these before you reach for the chorus, as they can add some serious width to pads and leads. The lower voicing buttons – mono, legato and poly – can be set per layer for more complex sounds, as with all the controls in this section.

The Filter section features two dials for cutoff and resonance with sliders for ADSR (independent of layer linked) and envelope depth, which runs ±100 per cent. Each layer has a choice of LPF and HPF, which is enough for most occasions, although a BPF option would be welcome.

Finally the Amp block houses an ADSR envelope with depth control, panning and three velocity response buttons – 0 per cent, 50 per cent and 100 per cent – which is a simplicity we can all get behind. All four of these blocks have been thoughtfully selected to produce an efficient framework within which to tailor The Prince without overloading the user with decisions.

In a grey brushed metal style lower section are five effects: noise, distortion, chorus, delay and reverb. As ever, simplicity reigns here with only an on/off, wet/dry control and ‘+’ parameter expander per effect. No matter which ‘+’ is clicked, the whole row pops up to reveal controls for all the effects. These are all good quality effects with a good deal of range singly and in series, the order of which is fixed.

The noise effect is slightly unusual, working like a super simplified Cableguys NoiseShaper in envelope mode. The six noise types that can be triggered in relation to the input signal, i.e. the pre-effect sum of the two layers, appear to be rain, a hum/hiss combo, shoreline water, vinyl crackle, some kind of steam hiss, and a digital crackle; there is no manual to confirm these identifications.

Though this hardly seems the most essential effect, especially in this context, it does fit the bill with regard to the textural emphasis of the instrument and many of its presets. Some instruments provide effects that sound like an afterthought, but The Prince provides a well matched set that, in most cases, will keep any channel plug-ins to EQ and compression if required.

For a sample-based virtual instrument The Prince is not a cheap option, but what it possesses in character, immediacy and sound quality does make it a far more attractive prospect than many highly flexible synth packages in the same price range. It is a unique instrument that doesn’t sound like anything in particular. It has, however, a character and texture much aided by the quality interface and effects that stirs and stimulates creativity – which is after all what a musical instrument should do.